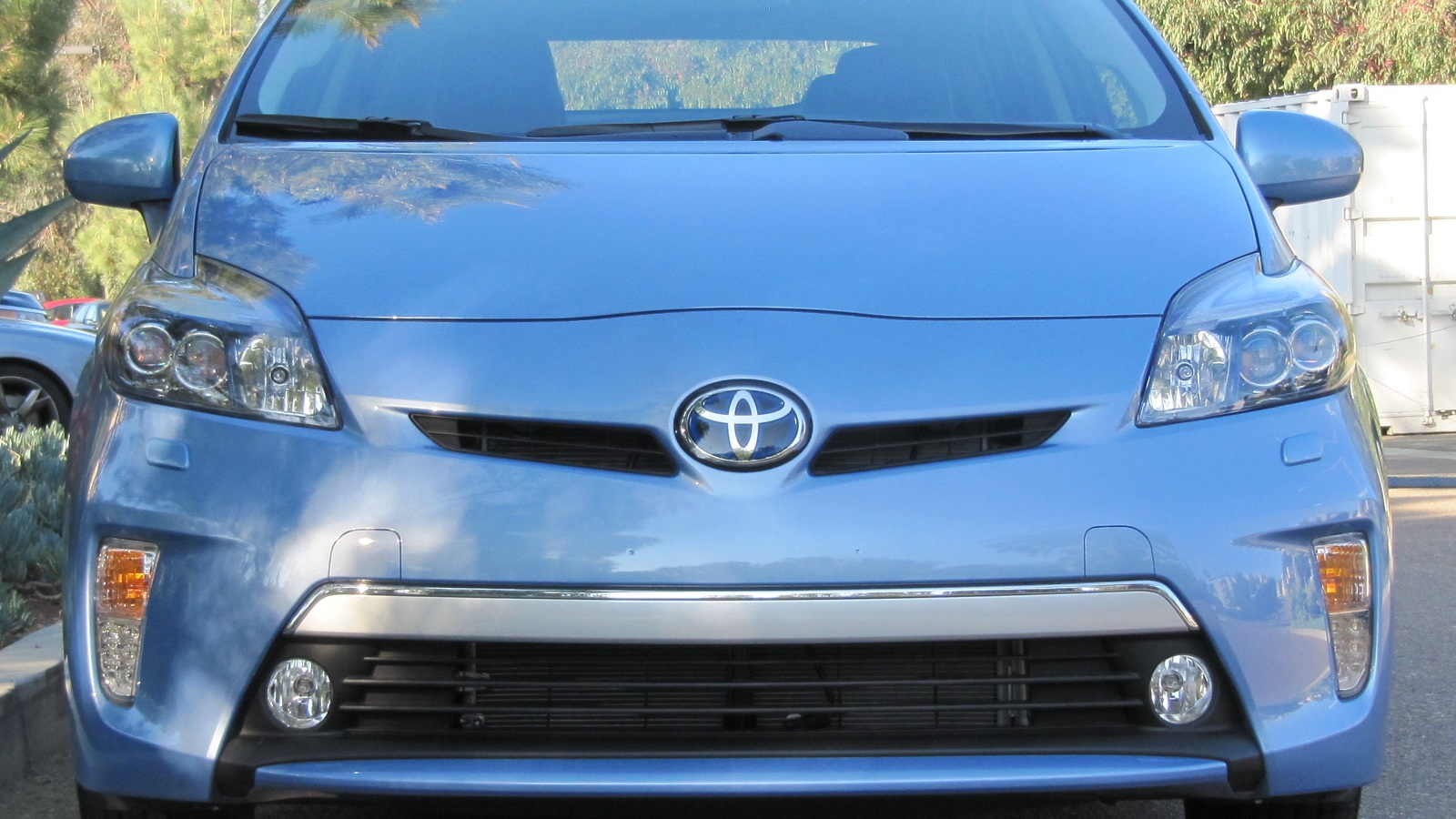 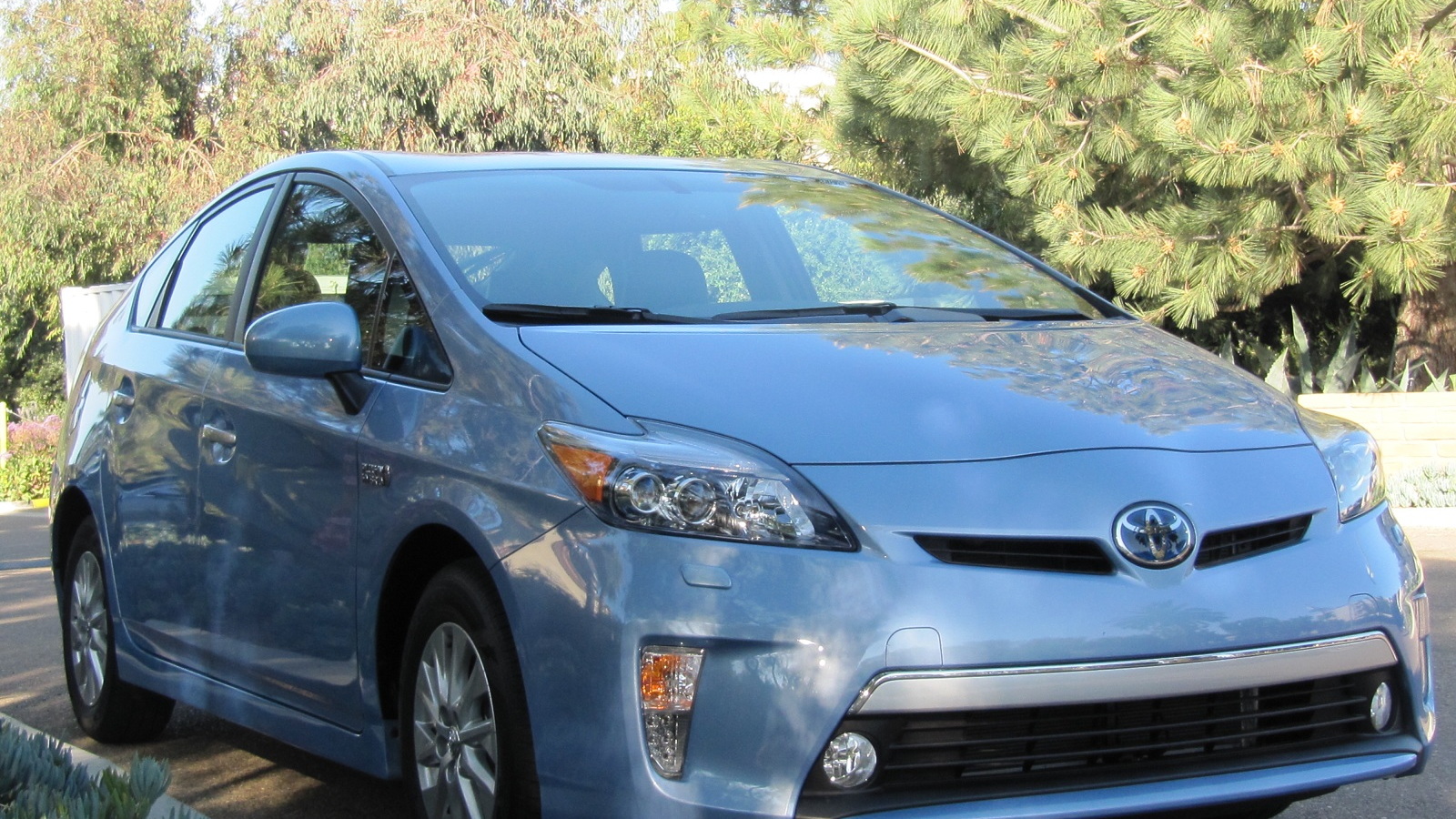 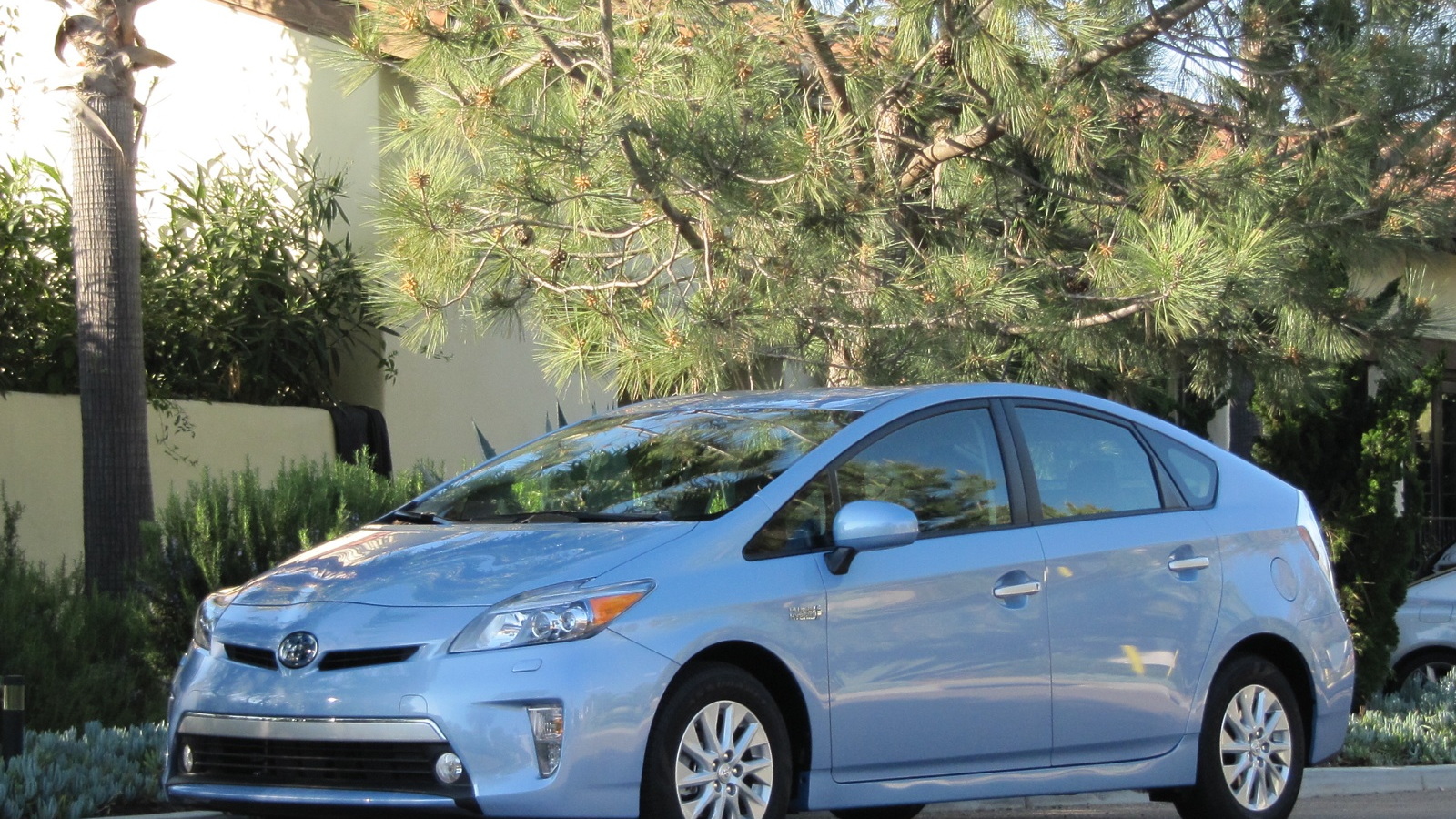 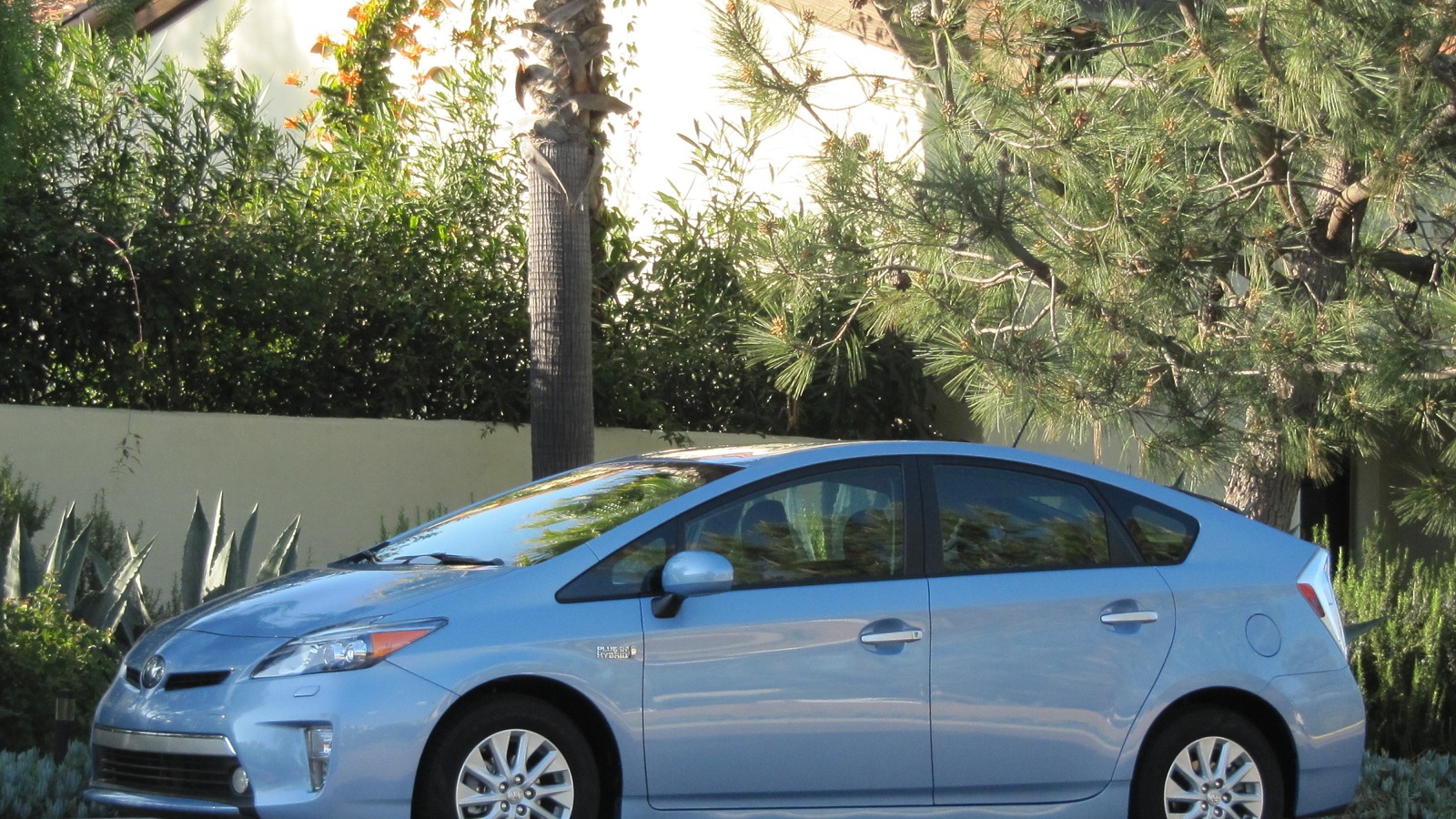 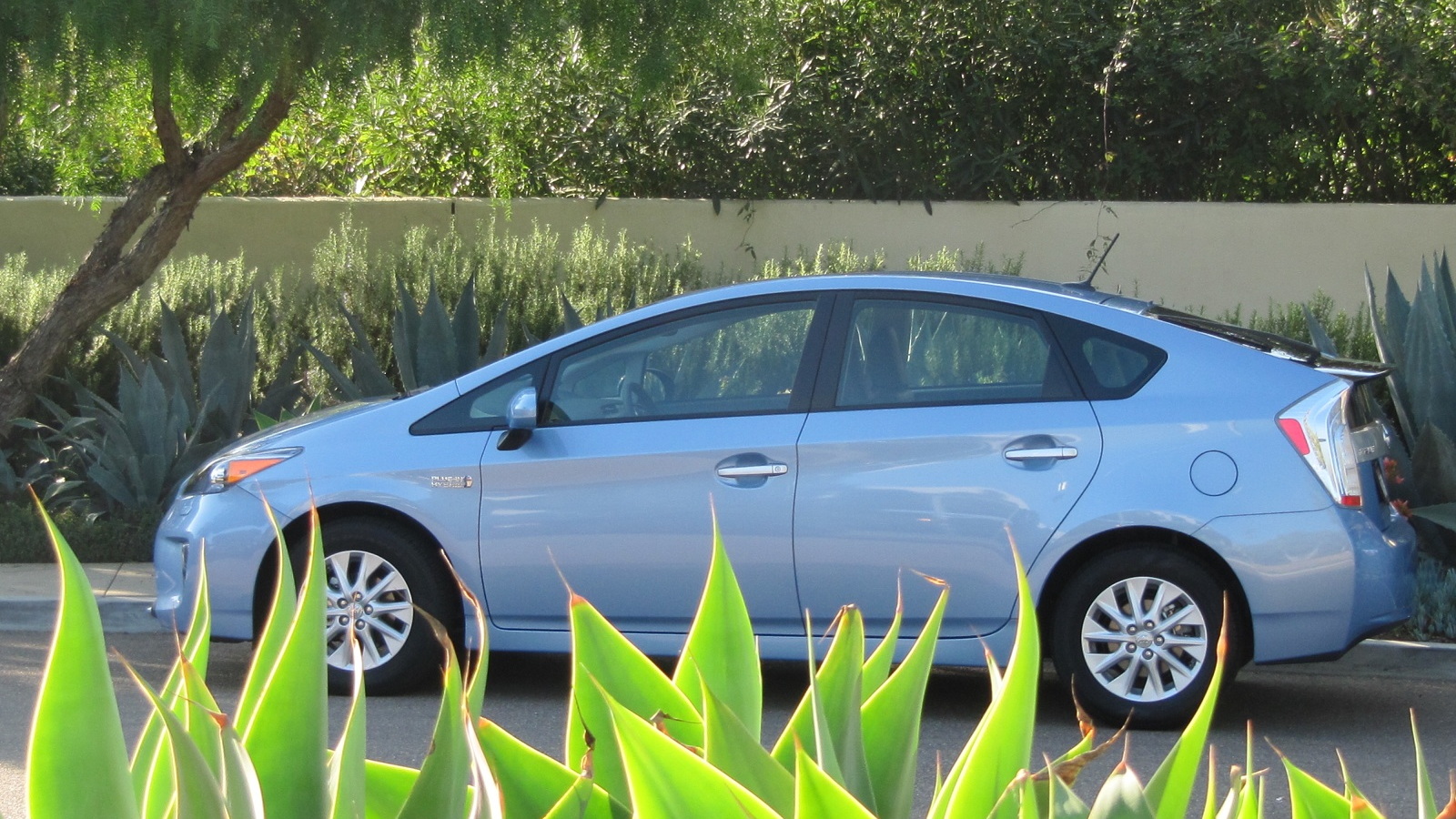 We all understand what miles-per-gallon means for a gasoline car.

And we can readily grasp the range in miles of an electric car.

But when a car has both a gasoline engine and an electric motor, things can get complicated.

The standard 2012 Toyota Prius is rated at 50 miles per gallon, and at best it has 1 mile or so of all-electric range (under light acceleration up to, say, 30 mph).

But the new 2012 Toyota Prius Plug-In Hybrid has a larger lithium-ion battery pack that plugs into a wall socket to recharge (in about 3 hours), giving it a multiple of that electric range.

It doesn't necessarily run continuously on electric power until its pack is empty, however--unlike the Chevy Volt range-extended electric car.

Instead, the Prius Plug-In will run electric-only up to speeds of 62 mph, potentially for 10 miles or a bit more, if the driver accelerates carefully and not too hard.

But as we noted in our brief drive of the plug-in Prius production version,

As we found out during a couple of short test drives last month in San Diego, this means that--even if you have 10 miles of electric range remaining--an uphill freeway on-ramp will switch on the engine at full howl when you floor the accelerator to merge into fast-moving traffic.

So how exactly does a manufacturer explain that on the EPA-mandated window sticker showing fuel efficiency?

With input from Greg Thome, a communications manager at Toyota, and our readers John C. Briggs and Dennis Chin, here's how we parse some of the ratings on the 2012 Toyota Prius Plug-In Hybrid window sticker.

(A) 95 MPGe:This is the car's efficiency while operating on a mix of gasoline and electricity--that is, on a mix of power from the charged battery pack, supplemented by engine torque under high power demand.

In short, using electricity to power an electric motor puts much more of the energy toward turning the wheels than does burning gasoline. The "MPGe" measure looks at the distance traveled on electricity with the energy content of 1 gallon of gasoline. The EPA says it will travel at this blended MPGe efficiency for 11 miles (see point D below).

(B) 50 MPG:This is the Prius Plug-In's gas mileage when it's operating in "gasoline" mode after the pack is depleted. Under those circumstances, the plug-in hybrid has the same gas mileage as a standard 2012 Prius liftback that doesn't plug in.

(C) $7,600: This is the amount the EPA says an owner will save in combined fuel costs over five years compared to a vehicle with the average of all fuel efficiencies of vehicles rated by the EPA--or more than $1,500 per year.

(D) 11 miles: This is the EPA's estimated driving range for "blended operation" on a combination of electricity (from a fully charged battery pack) and gasoline over a blend of city and highway driving. That is, it's how far you'll travel before the battery pack is depleted and the Prius Plug-In reverts to behaving like a standard Prius hybrid.

(E) 6 miles: But--and here's the kicker--in very, very small type, the EPA says the car's "All-Electric Range" is 6 miles. This is an "adjusted composite" based on their particular blend of city and highway test cycles, which includes a hill simulation at about 6 miles. You may get more all-electric range at lower speeds, or less if you drive fast or uphill.

(F) 540 miles: This is the EPA's estimate for the total range the Prius Plug-In will achieve until both its power sources are depleted. The comparable figure for a regular gasoline-only Prius is 536 miles.

One final note: The Prius Plug-In Hybrid requires the driver to select "EV" mode to use battery power when the car starts up.

If a driver doesn't do so, the car operates like a regular Prius right off the bat. This allows drivers to save their EV miles and use them in specific locations.

It would appear to us that the EPA tests assume the "EV" button is selected at the start, and the car is driven continuously until the pack is depleted.