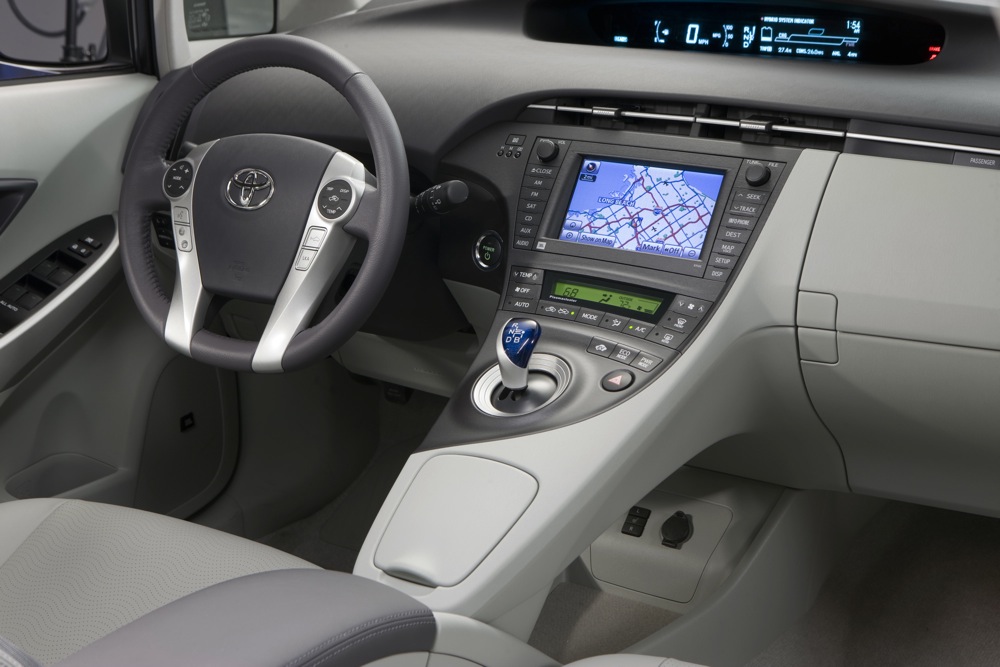 There's a whole lot to love about the 2010 Toyota Prius. So far, we've given you "Everything You Need to Know," run down our first impressions and what's new, and talked about the gas mileage we got. Today, our 10 favorite things about the 2010 Prius:

(3) Nicer interior. The plastic is more pleasant, the optional two-tone looks great, and while the definitive hybrid has to retain its slightly Space-Age vibe, the interior of the 2010 Prius won't make Grandma nervous--unlike the previous model.

(5) Remote Air Conditioning. We're shocked no one thought of this before, though not all cars have an electric A/C system (so the engine doesn't have to switch on). Press the button, and the 2010 Prius cools itself for 3 minutes before you arrive.

(6) Touch Tracer. We've always wondered how much concentration we lose going back and forth between the road ahead and a centrally mounted monitor. Now, easily-learned "Touch Tracer" steering-wheel buttons show up on the display at the base of the windshield. Result: Less time, and attention, needed for switching back and forth.

(7) Eco Mode. When you're not in a hurry, or the next time gasoline shoots up to $4, the Eco Mode button directs the car to operate most efficiently. It's slower, but uses a lot less gas.

(8) Performance Mode. When you are in a hurry--or have a full car and need to merge onto the freeway from that blind uphill on-ramp--the Performance button gives you the oomph you need.

(9) Hill Hold. Toyota's not the first to offer it (Subaru had it 20 years ago), but once you've been able to lock the brakes when you're facing uphill at a stop, you'll wonder how you ever lived without it.