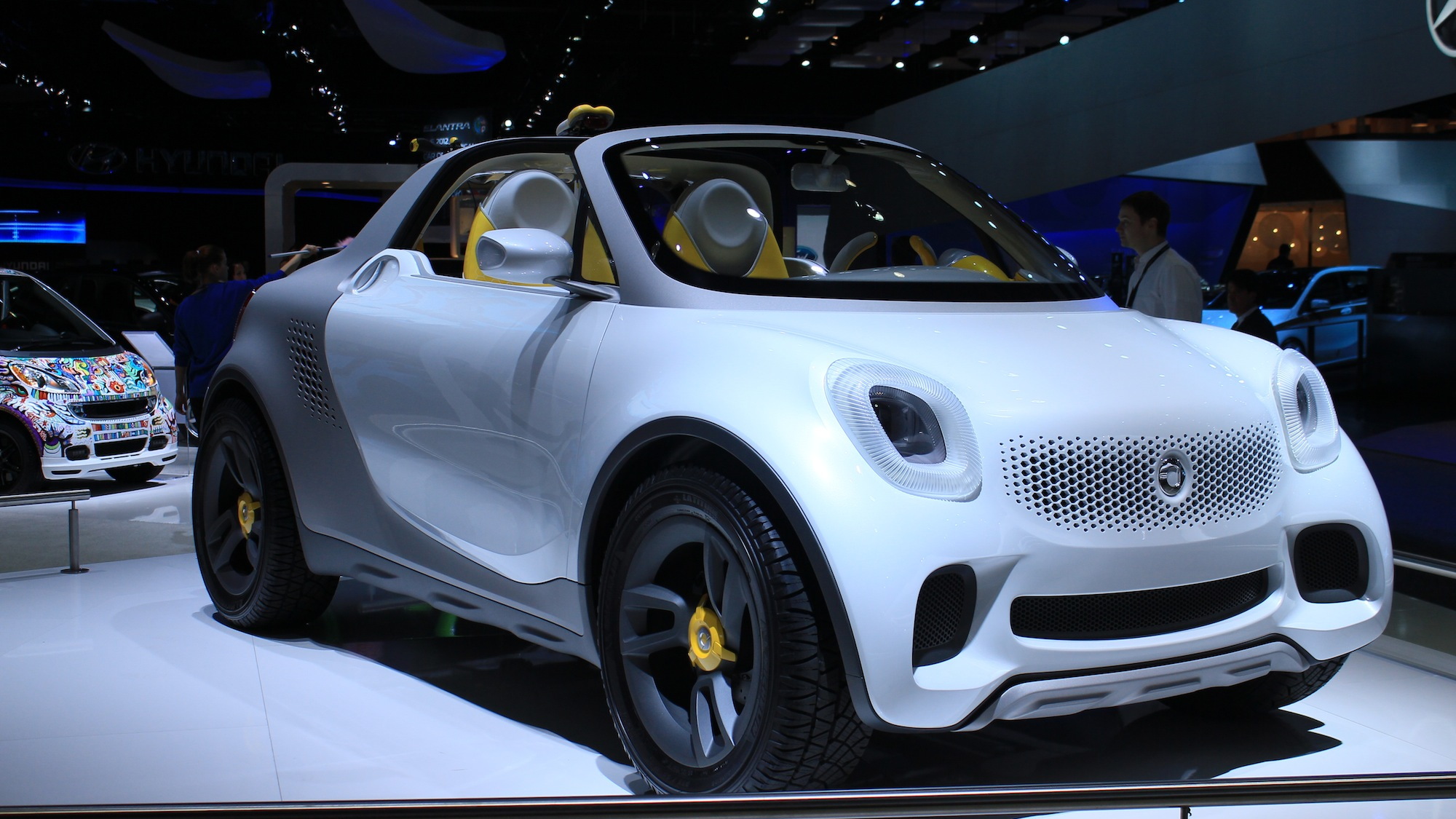 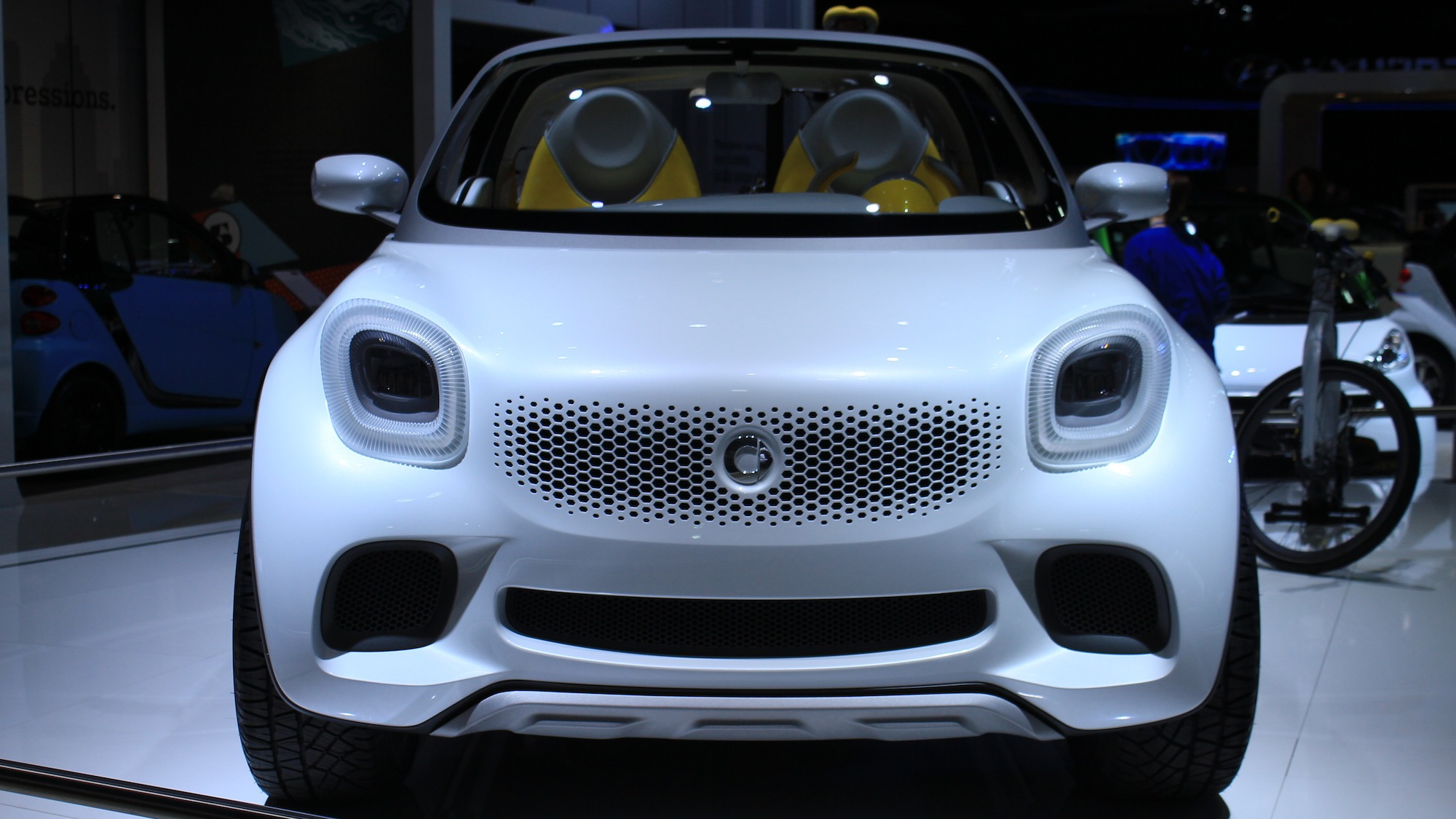 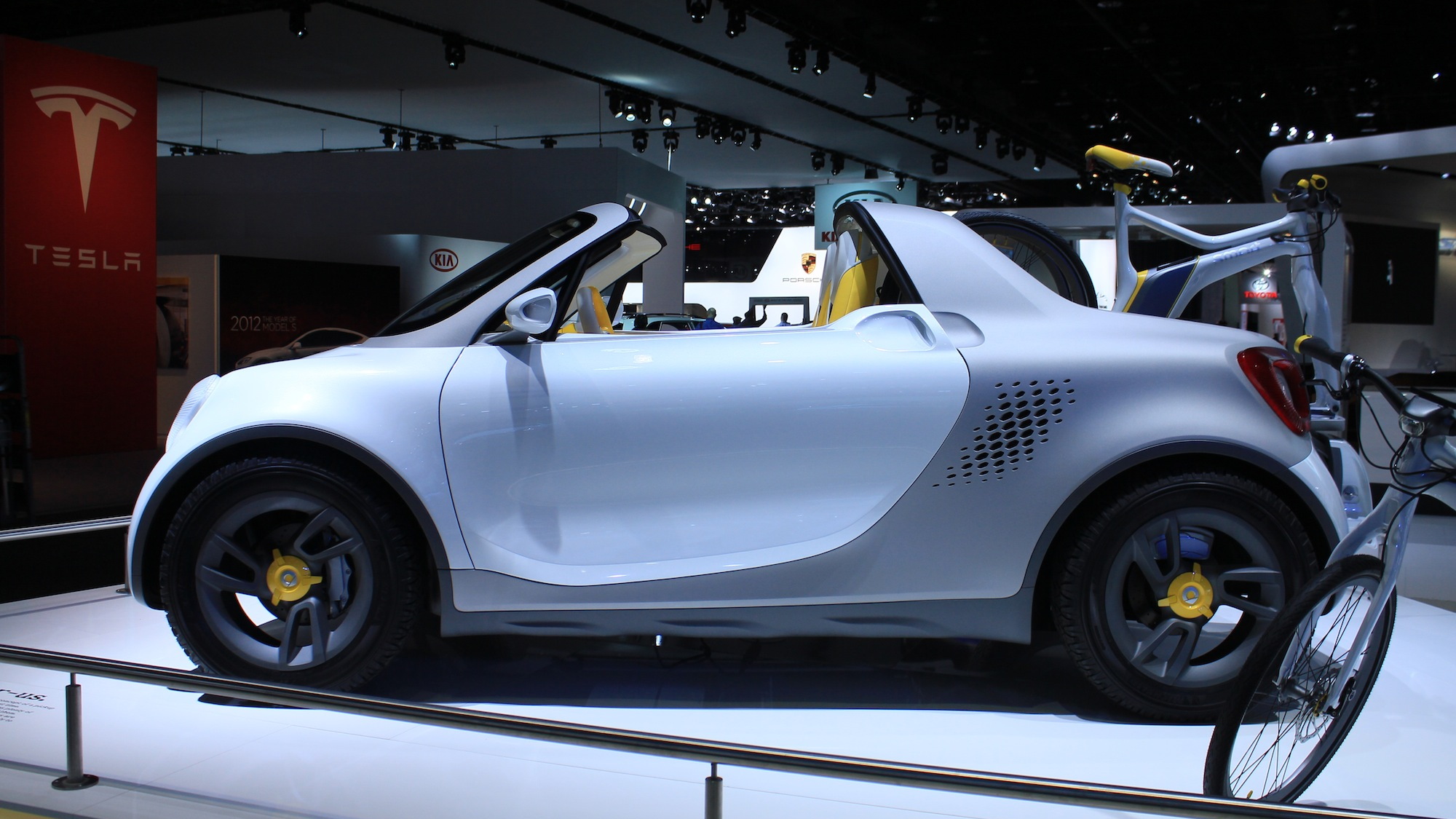 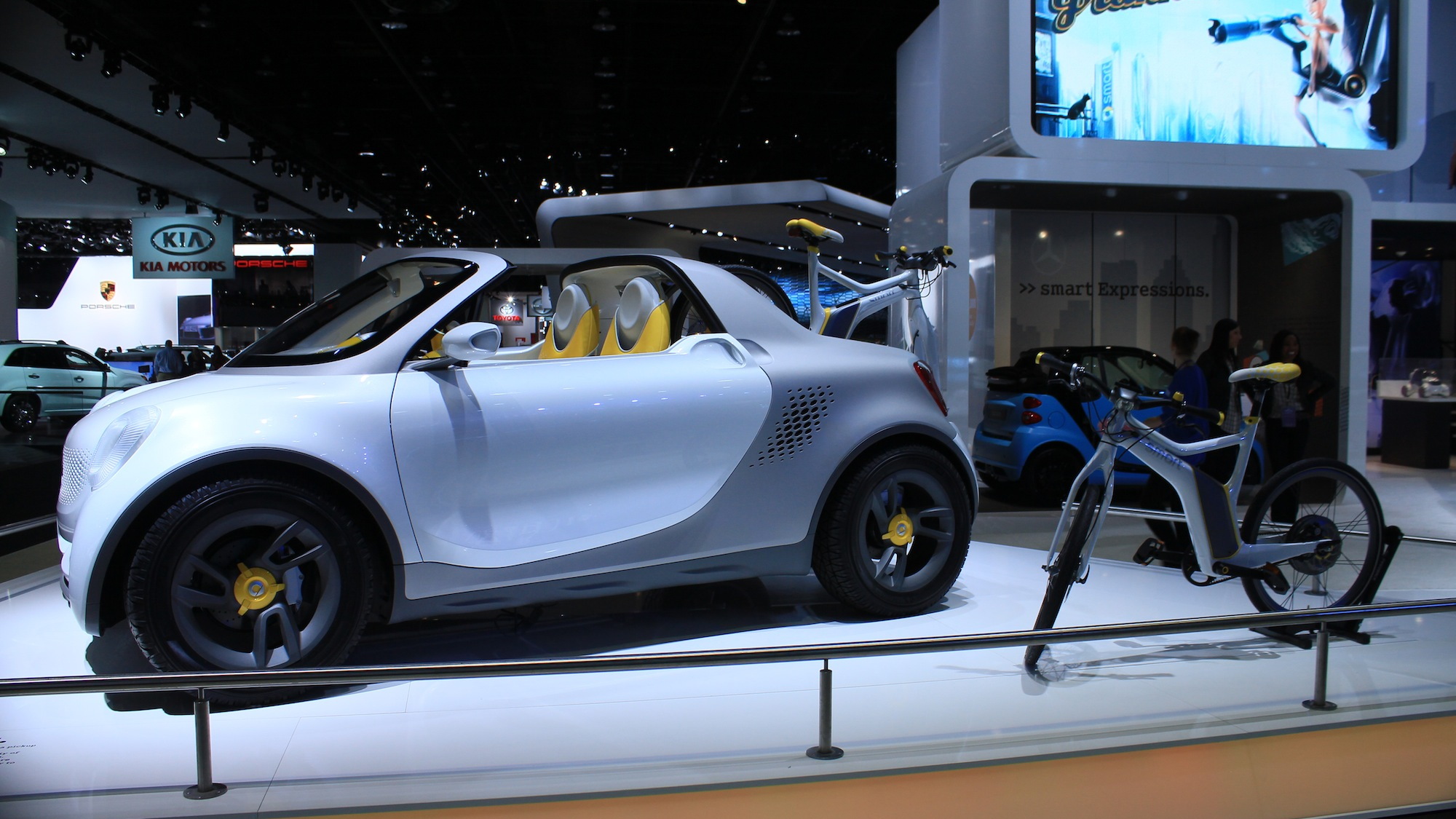 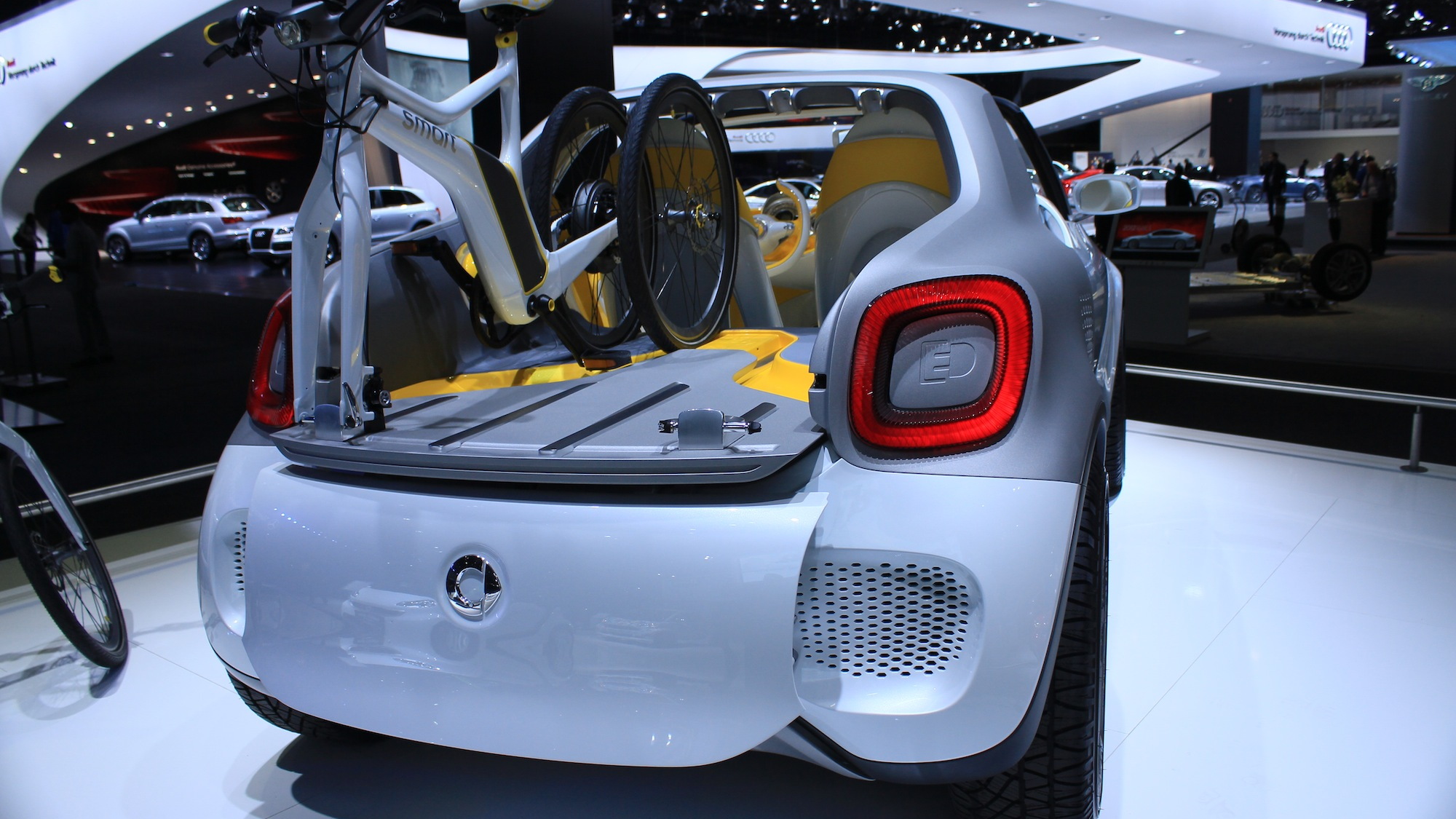 We'd be tempted to say that Smart is playing to stereotypes by unveiling a pickup concept at the North American International Auto Show (NAIAS).

However, there's nothing stereotypical about a small, all-electric, city-car based, convertible pickup. In fact, the Smart For-Us Concept we previewed a month ago is nothing, if not original.

There might be a good reason that nobody has ever unveiled a small, all-electric, city-car based, convertible pickup before, but then concept cars are all about pushing the boundaries.

The small element is a given, because it's a Smart. Smarts are small. It's their raison d'être, designed for parking and nipping around crowded European cities while using equally small amounts of fuel.

As an all-electric small car, the For-Us doesn't even use small amounts of fuel, until you trace its electricity back to power stations. It ensures local air stays clean though, and its 73 horsepower, 95 pound-feet electric motor provides a top speed of 75 mph.

The 17.6 kWh battery should be good for a range of 86 miles, as it is in the third-generation Smart ForTwo Electric Drive, which donates its drivetrain. That car is expected to arrive in the Spring.

As a convertible, all-electric small car, you get to enjoy that fresh air in the... erm... fresh air. It also suggests that Smart is testing the water for a sporty variant of its next-generation ForTwo. The styling certainly has hints of recent concepts, like the ForSpeed and ForVision.

The pickup element of the convertible, all-electric small car is the stereotypical bit. America loves pickups, but small cars not so much. Smart wants the For-Us Concept to appeal to those for whom the regular Smart is a little too small, while remaining eco-friendly - in the bed, you'll find space for Smart electric bikes.

Each element on its own makes sense, but together? We'll leave that up to you to decide. Smart is unlikely to build it, but it could be the best clue yet as to what the next generation of ForTwo might look like.

Want to hear more from the NAIAS? You'll find it on our 2012 Detroit Auto Show page.