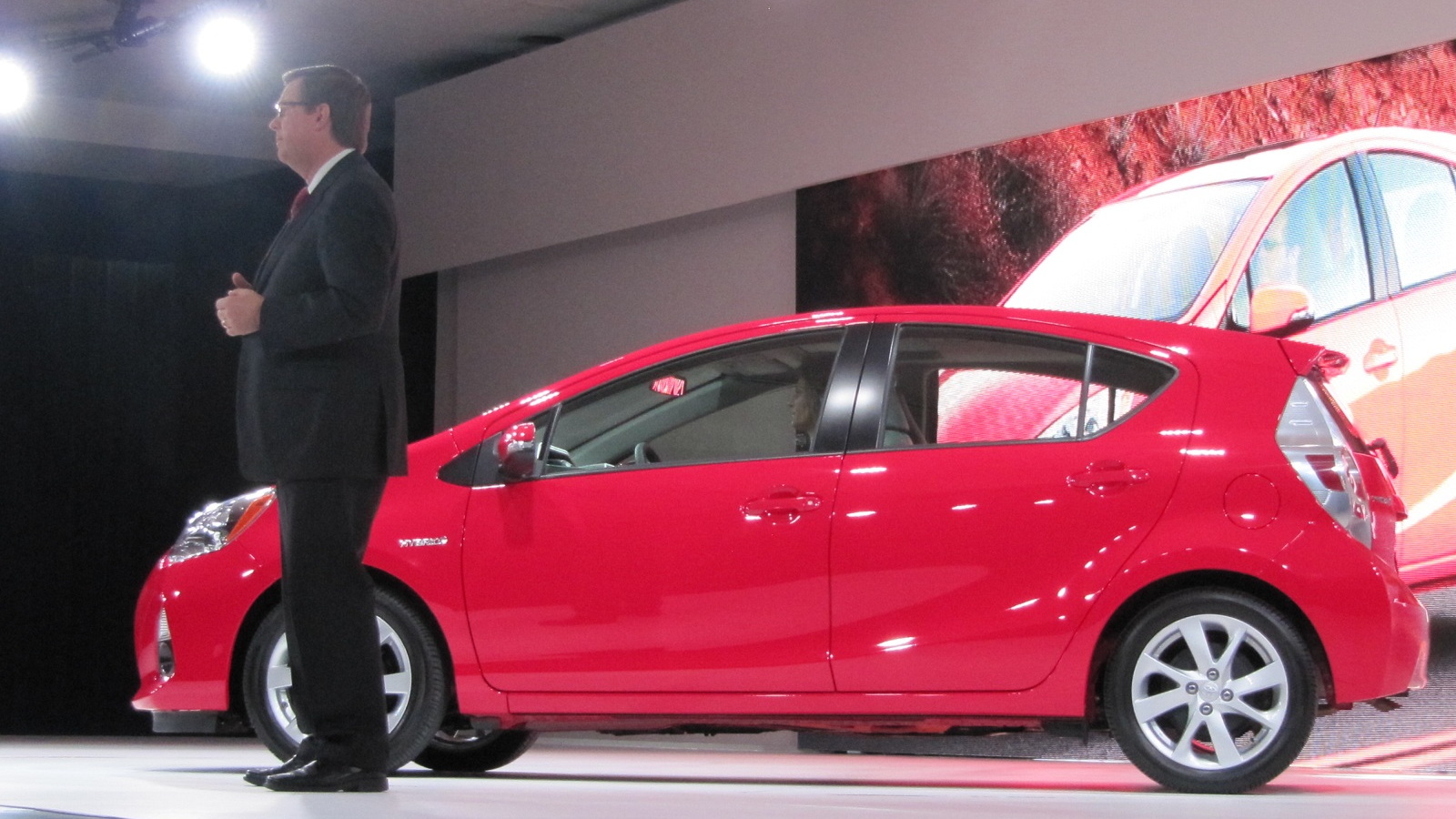 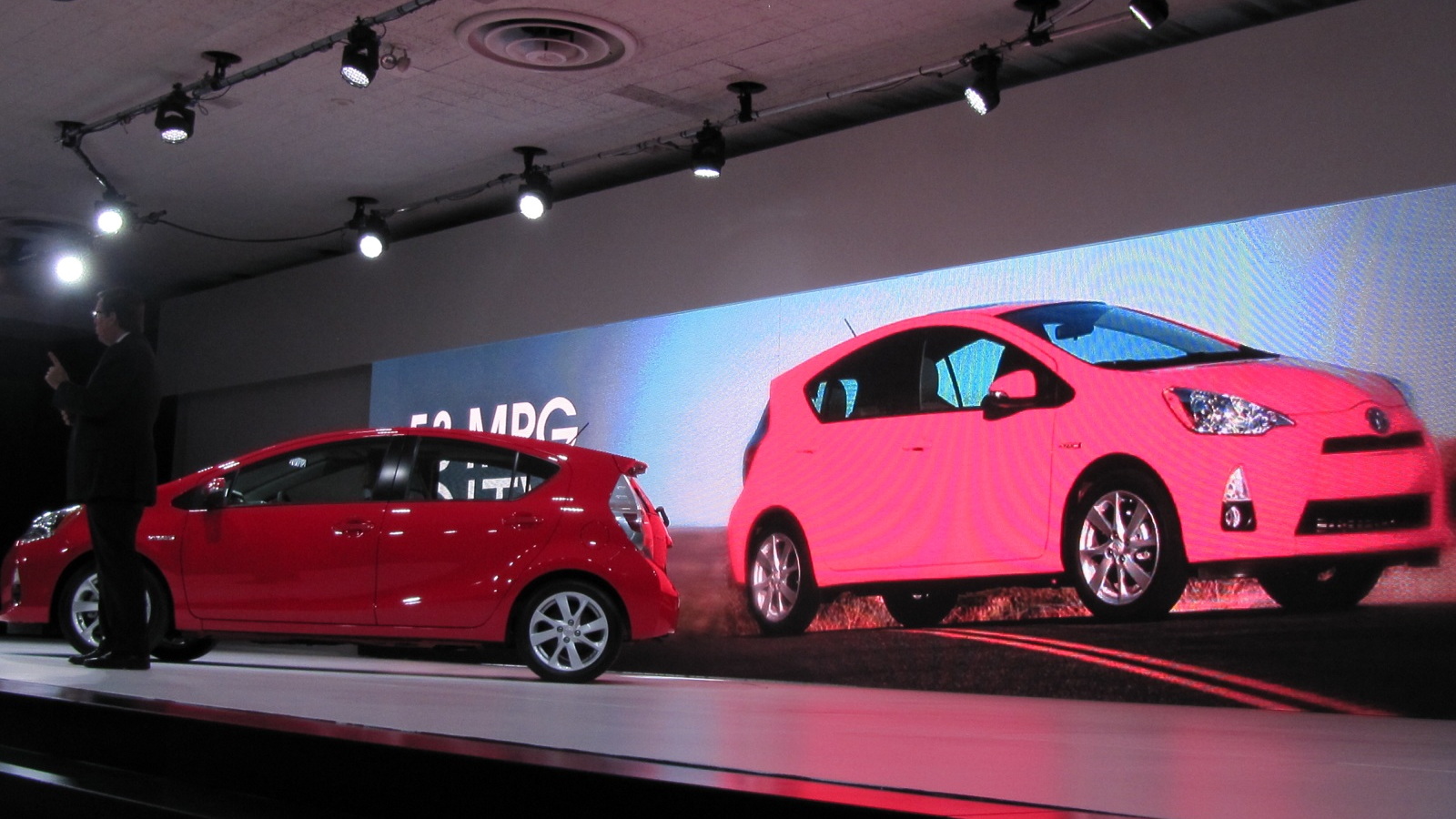 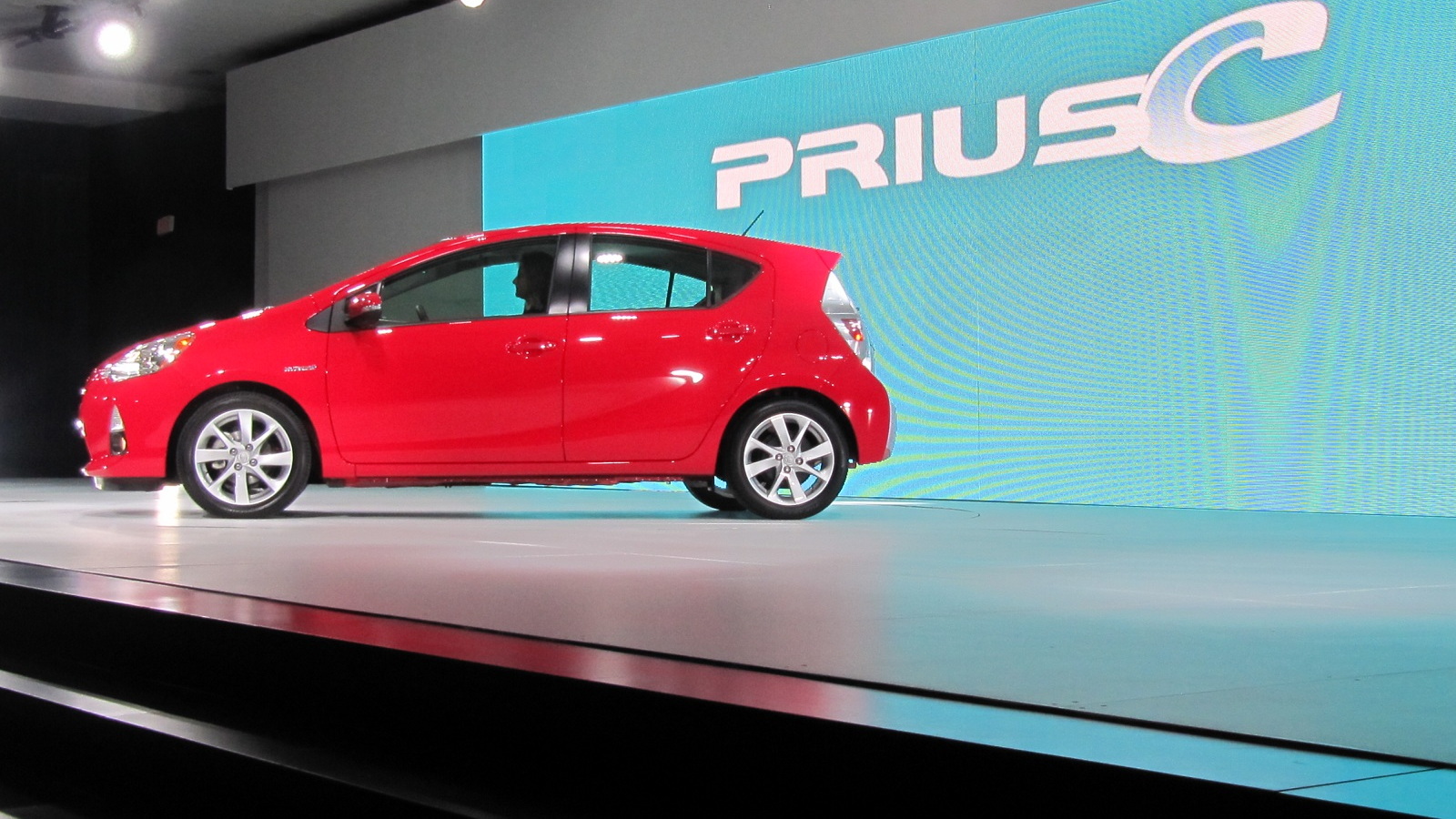 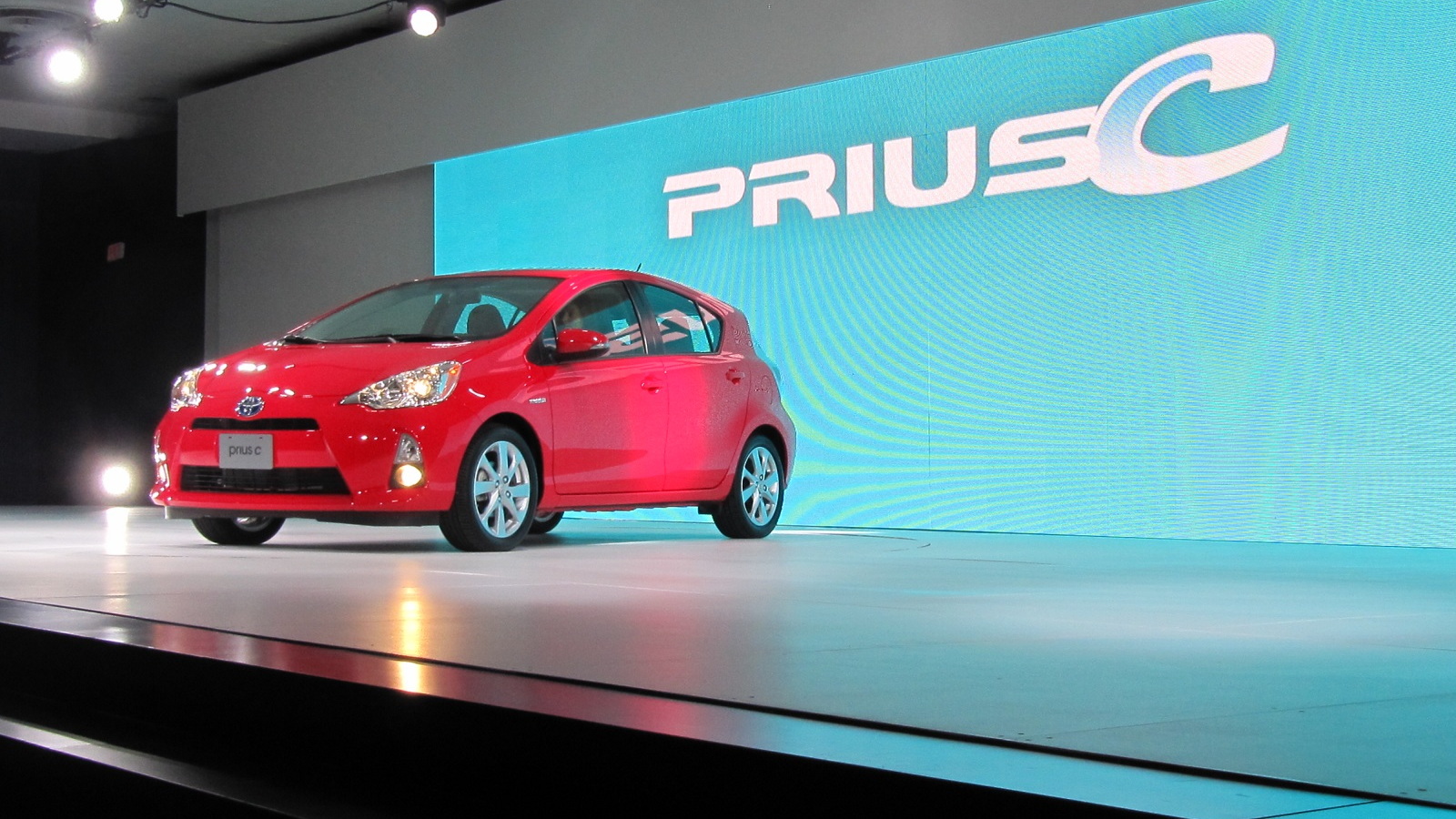 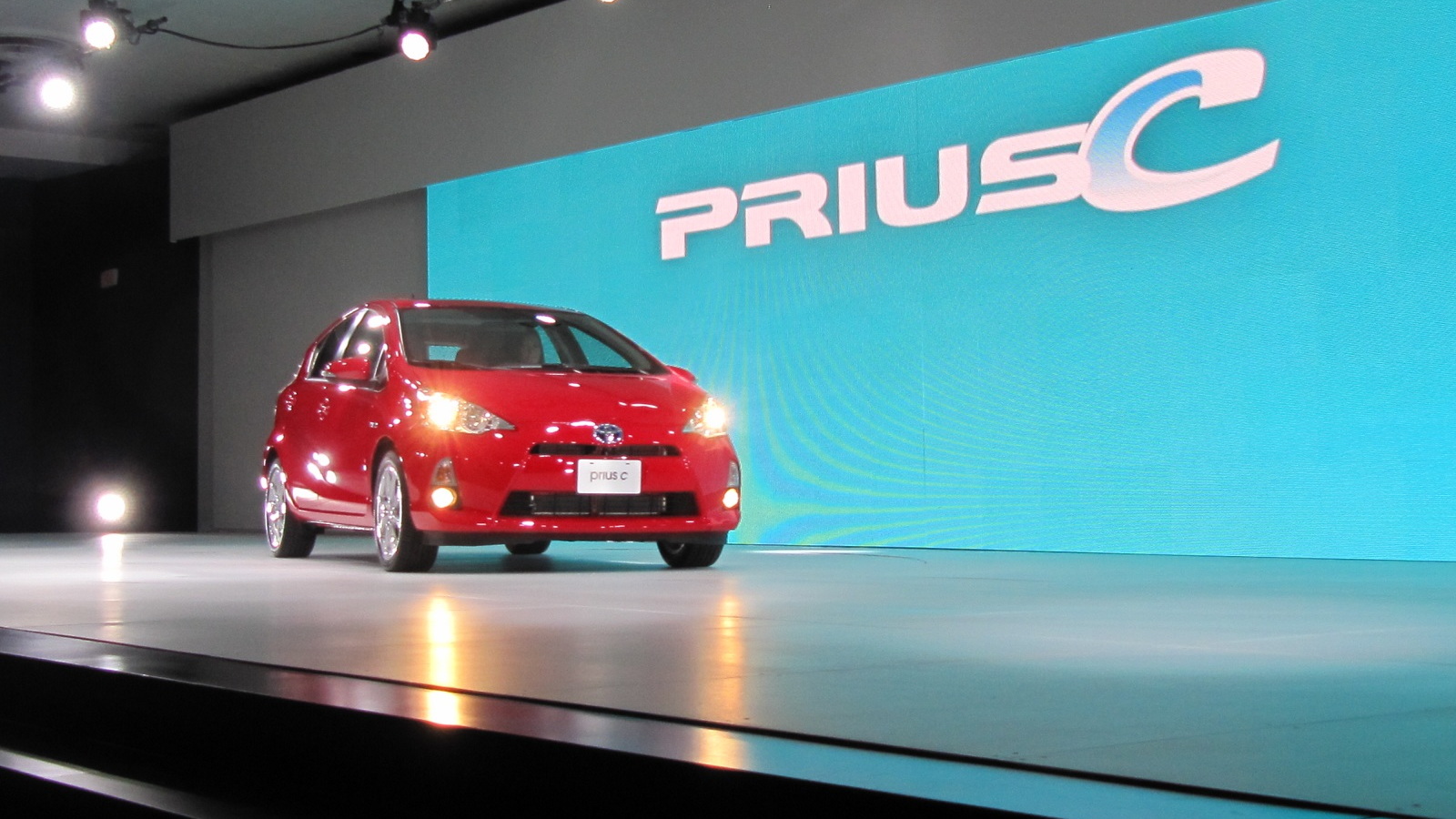 The new car adds a fourth member to the expanding family of Prius hybrid vehicles and takes the base price for a Toyota hybrid below $20,000 for the first time.

While the car is considerably smaller than the traditional Prius mid-size hatchback, Toyota expects its combined EPA gas-mileage rating to be the same: 50 miles per gallon.

The company is highlighting the Prius C's EPA city rating, which is 53 mpg, the highest achieved by any non-plug-in car sold in the U.S.

The highway rating is 46 mpg, producing a combined 50-mpg rating. (The comparable figures for the 2012 Toyota Prius are 51 mpg city, 48 mpg highway.)

Toyota calls the 2013 Prius C a subcompact; it is 19 inches shorter than the standard Prius hatchback, 2 inches narrower, almost 2 inches lower, and more than 500 pounds lighter.

Toyota says it has redesigned virtually every element of the Hybrid Synergy Drive system to lower the size and weight of the components. The same, more compact hybrid system is used in the Toyota Yaris Hybrid sold in Europe--but not destined for the U.S. market.

Both the nickel-metal-hydride battery pack and the fuel tank are located underneath the rear seat, providing a deeper rear load bay than in the larger Prius hybrid, which has its battery pack under the rear deck. Toyota claims 17.1 cubic feet of cargo volume.

As in all new Prius models, the driver can select among Normal, Eco, and EV drive modes. Toyota says the Prius C can cover less than 1 mile in electric mode, at speeds up to 25 mph.

The 2013 Toyota Prius C will be offered in four trim levels, with the base price of the lowest level coming in below $19,000.

A 3.5-inch color TFT information display is standard, along with Bluetooth hands-free mobile phone capability and iPod connectivity through a USB port.

Automatic climate control is standard, as is a tilting and telescoping steering wheel with integrated audio controls, and remote keyless entry.

The smallest Prius will start showing up at Toyota dealers this spring.