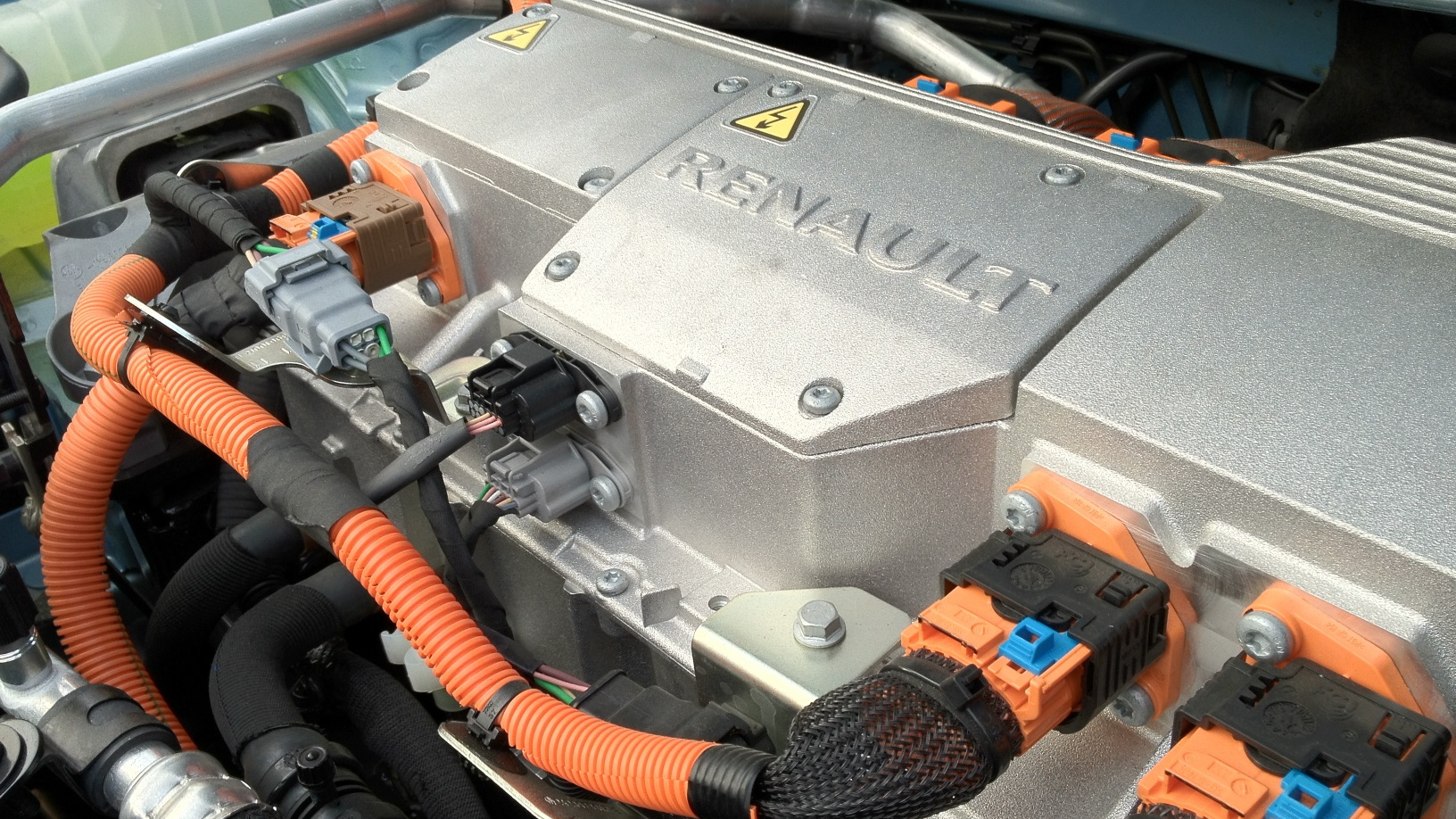 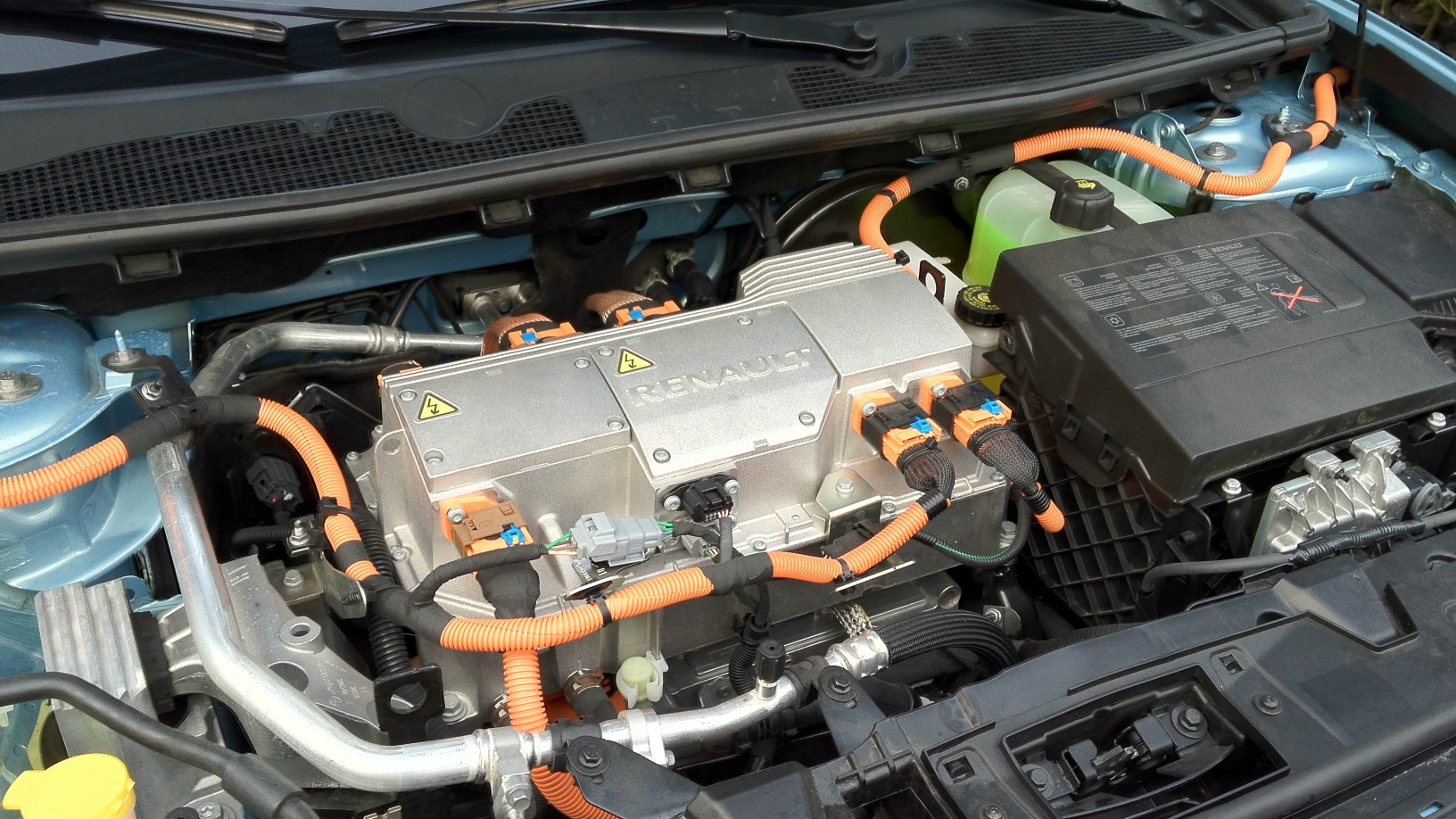 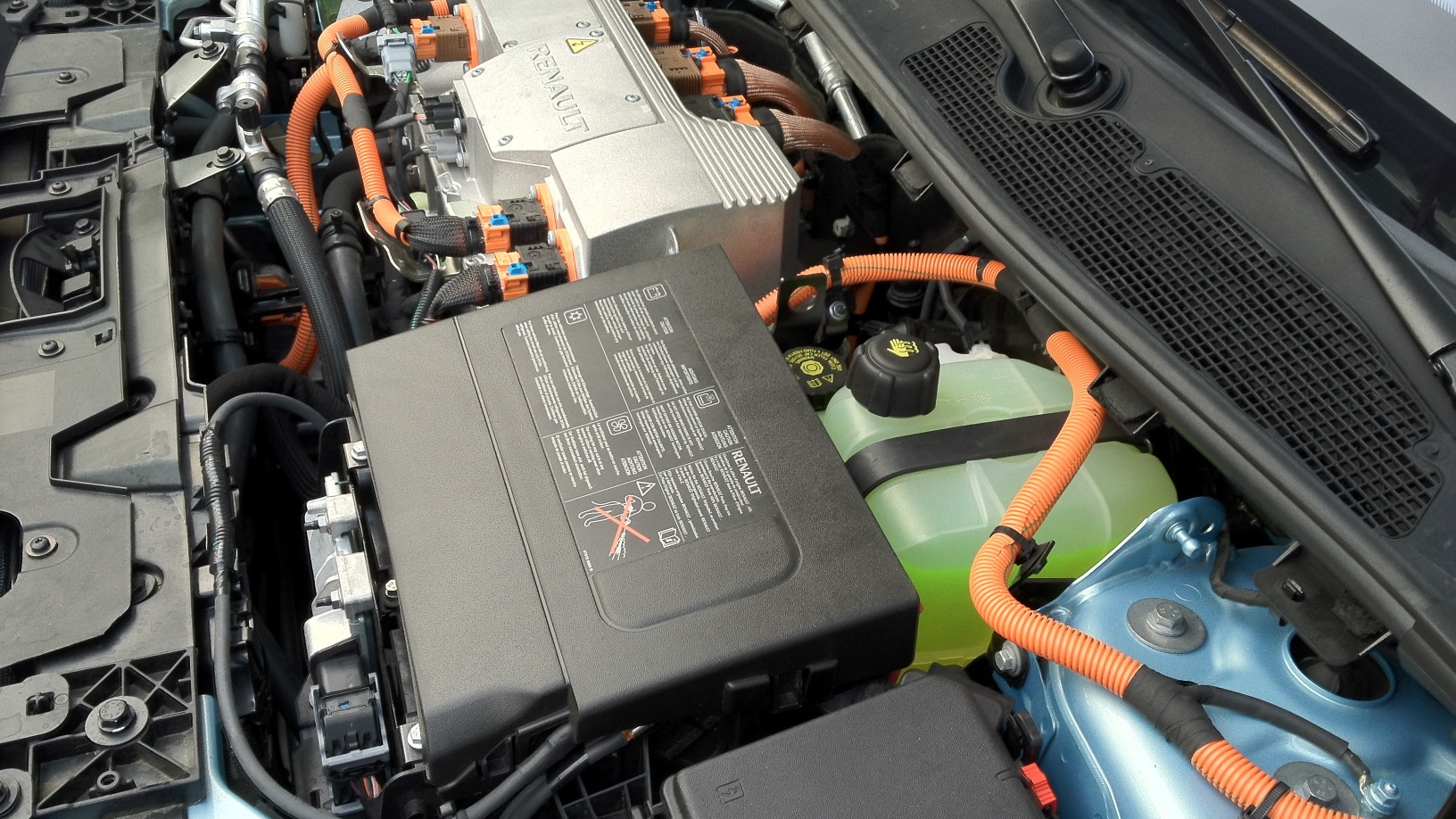 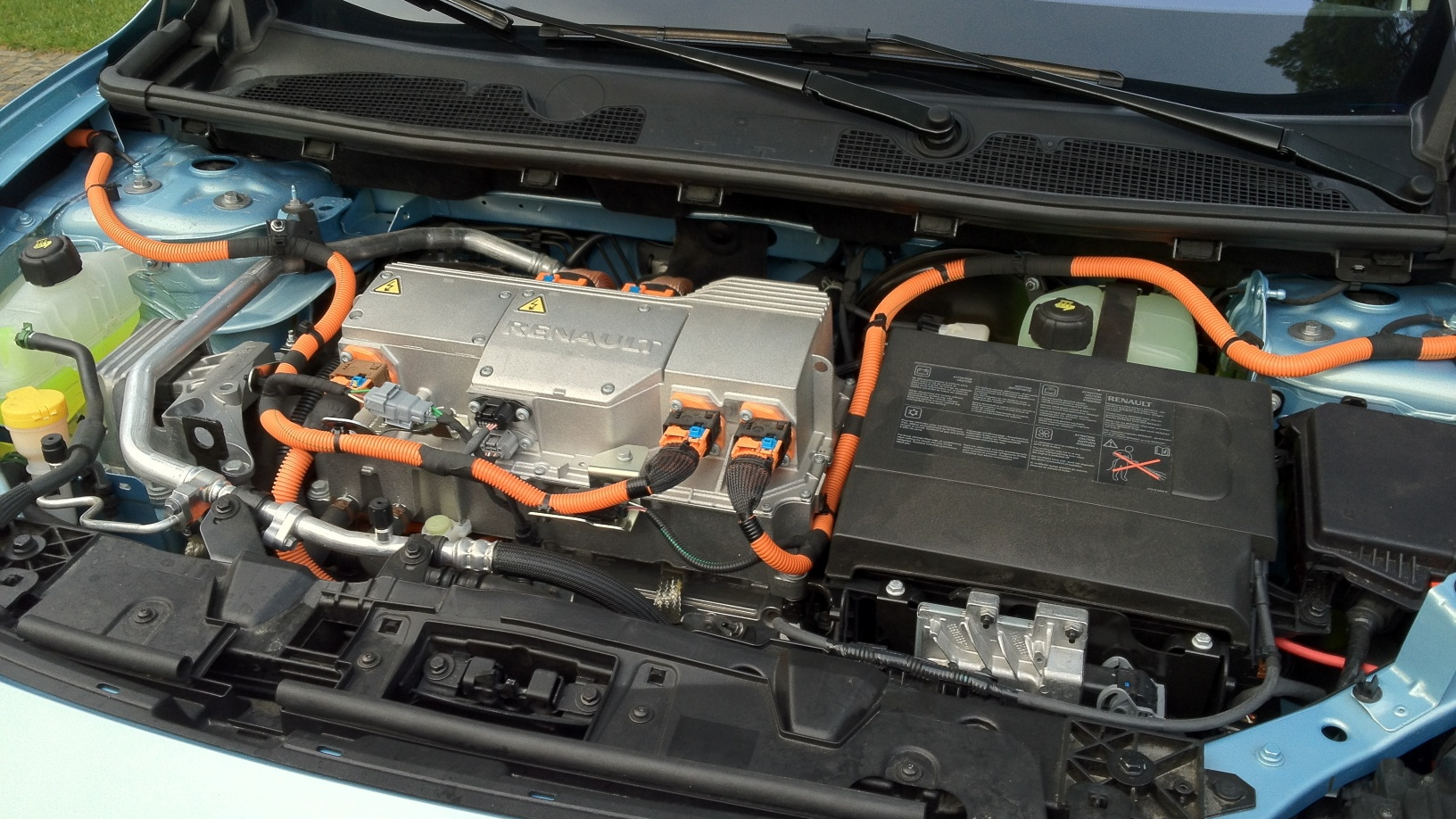 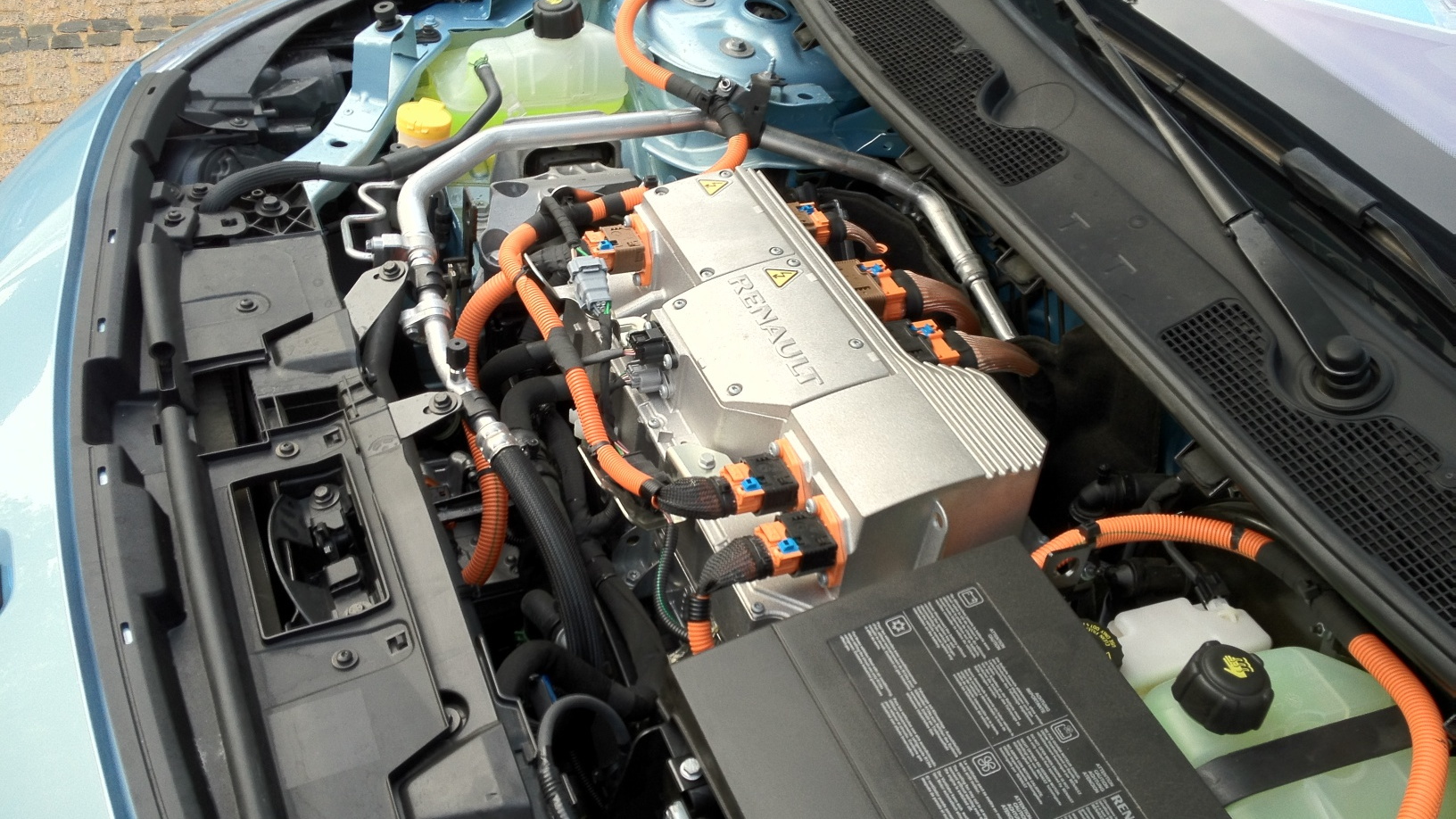 You might not know it, but the 2012 Renault Fluence Z.E. electric car is technically the world’s most in-demand electric car. With a massive 100,000 cars ordered by battery swap and charging infrastructure company Better Place and production already underway,  the French designed electric sedan from the Renault-Nissan alliance could be the highest-selling electric car of 2012.

Earlier this year, we got the chance to spend a few minutes driving a prototype Fluence Z.E. sedan through the streets of London, England during a press launch event.

But a ten minute drive through the center of London traffic isn’t the best possible way to get a true impression of any new car, so when we were invited to Portugal to thoroughly test both the 2012 Fluence Z.E. and its minivan sibling -- the 2011 Kangoo Z.E. -- we couldn’t refuse.

The 2012 Renault Fluence Z.E. is Renault’s first all-electric mid-size sedan. Based upon its gasoline sibling -- the 2012 Fluence -- the Fluence Z.E. features seating for five, a range of 114 miles on the NEDC European test cycle, and a 22 kilowatt-hour lithium manganese battery pack.

Since the 716 pound battery pack occupies the space directly behind the rear seats rather than beneath the car’s floor, Renault has extended the rear of the Fluence Z.E. by almost four inches  when compared to the gasoline Fluence. This is to ensure that it retains the same 11.19 cubic feet of trunk space as its fossil-fueled sibling.

Apart from the slightly longer body, the 2012 Fluence Z.E. looks identical to the gasoline version from a distance. Get closer, and the specially-designed grille, wheels and dual J1772 charging ports hint at the all-electric drivetrain. 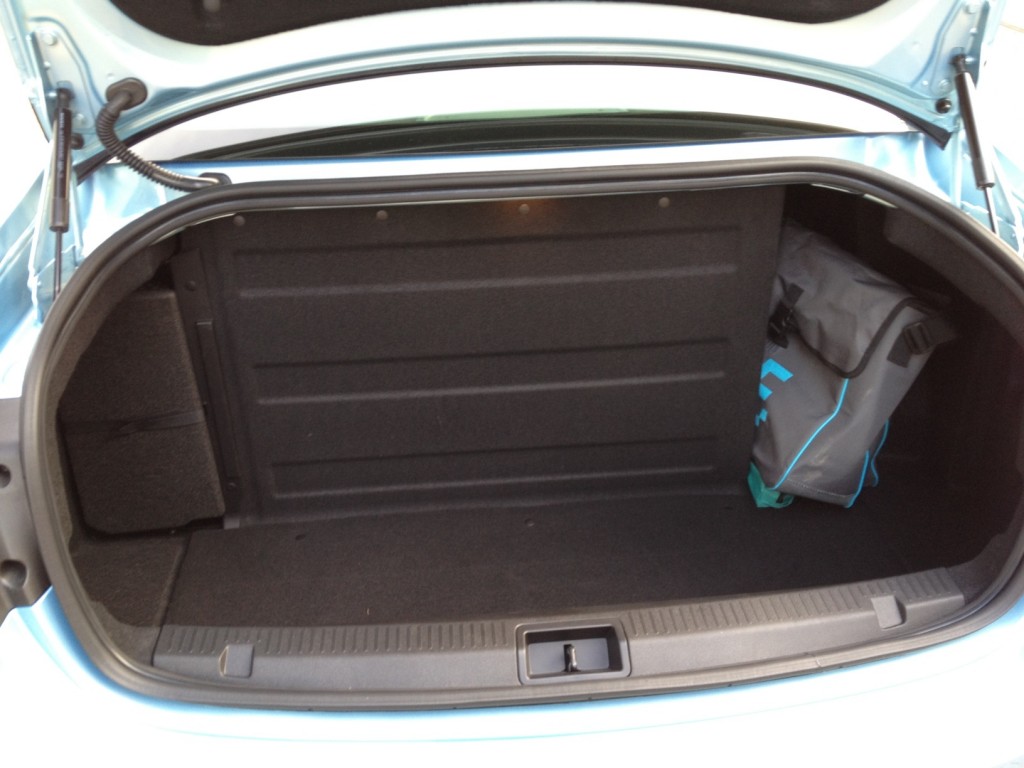 Unlike other electric cars on the market, the Renault Fluence Z.E. is sold without batteries included. Customers will then be expected to enter into a monthly service contract with Renault in exchange for a fully maintained, fully guaranteed battery pack. Like a cellphone talk plan, the amount charged will vary according to how much the car is used.

For most markets, this is how Renault plans to sell the mid-size sedan. But in Israel, Denmark and Australia, customers can opt to rent their car battery pack directly from Better Place.

With an order of 100,000 Fluence Z.E. cars already signed, Better Place -- and its 3- minute rapid swap battery station business model -- has ensured that Renault has already made a profit on the $30,000 electric car, not to mention the multitude of battery packs Better Place will have ordered.

And while Renault executives won’t admit it, the relationship with Better Place is probably the reason why the Fluence Z.E. doesn’t feature the rapid D.C. charging capability of the

Nissan Leaf. To do so would constitute a direct commercial challenge to Better Place. 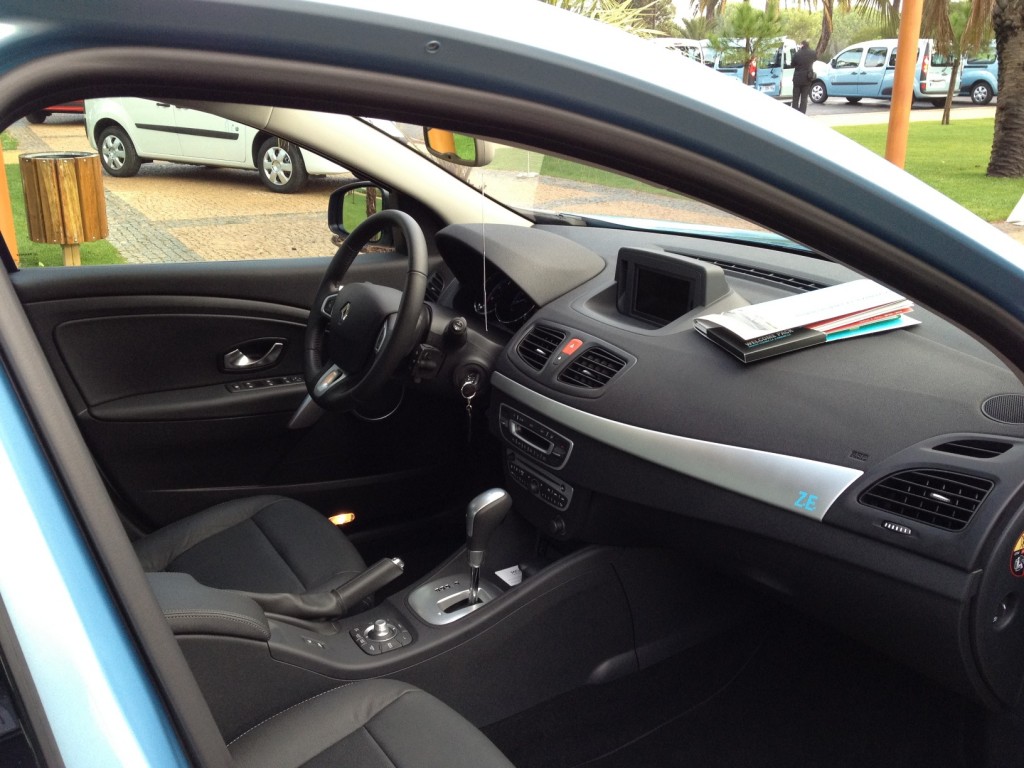 Unlike some of its closest rivals, the 2012 Fluence Z.E. isn’t aimed at early adopters and geeks. Instead of being filled to the brim with large touch-screen displays, strange gear levers and quirky methods to cajole its driver to practice ecological driving techniques, the Fluence Z.E.’s primary dashboard is dominated by two primary dials: the speedometer and the battery state-of-charge meter.

Modeled on traditional analogue dials, the speedometer and battery gauge should be familiar to anyone who has driven a car, making the Fluence Z.E. less tech and more car than many of its rivals.

That feeling is carried on to the gear selector and parking brake. Simplicity wins over, with a traditional hand-operated parking brake, and conventional forward-backward automatic-style gear lever mounted on the floor.

In fact, were it not for the Z.E.-branded satellite navigation from TomTom and various special trim panels bearing the Z.E. insignia, anyone sitting inside the Fluence Z.E. would have trouble telling it apart from its gasoline sibling.

Throughout our time with the car, the 2012 Fluence Z.E. provided a competent ride, easily coping with both city and rural traffic.

Power is provided courtesy of its 70 kilowatt motor, making a 0-62 mph time of around 13 seconds and an electronically-limited top speed of 84 mph.  When compared to the 2012 Nissan Leaf, the 2012 Renault Fluence Z.E. is a little slower to accelerate, both on paper and in the real world.

When it came to handling, we preferred the Fluence Z.E.’s heavier steering over the 2012 NIssan Leaf, although we noted that the higher battery pack meant the Fluence had a little more body roll on corners than the Leaf, 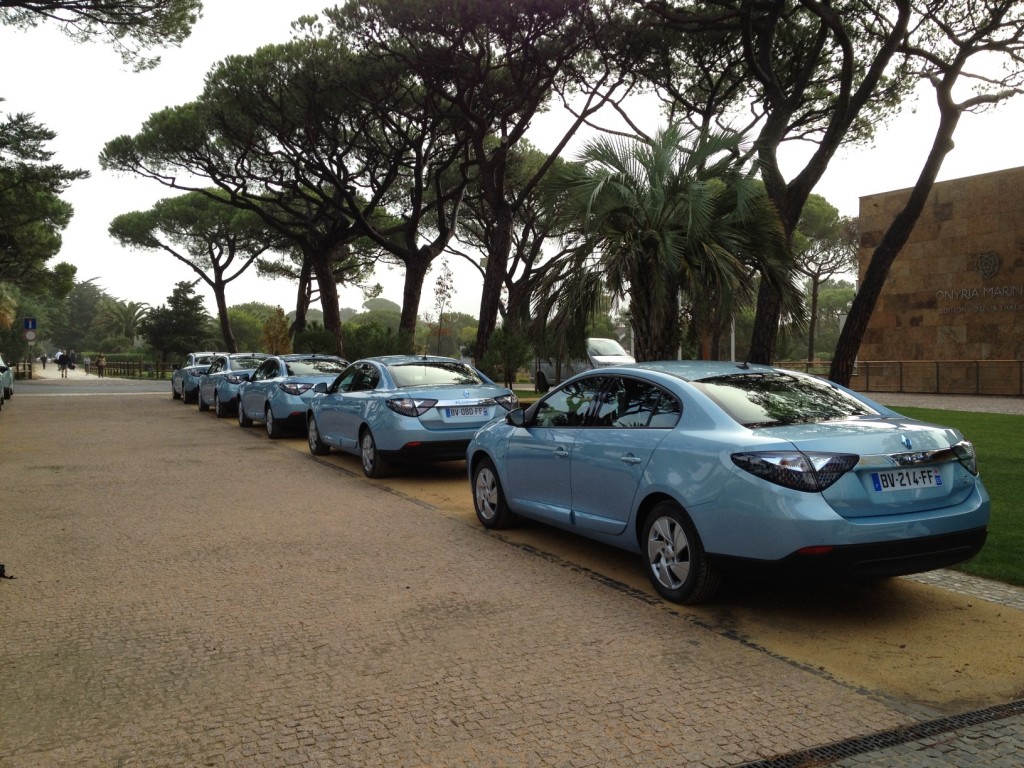 Generally, the Fluence Z.E.’s road manners were befitting of a mid-priced saloon, with firm and responsive braking. Initially, we found the mild regenerative breaking on accelerator lift-off didn’t slow us down as quickly as we might have hoped, making single-pedal style driving impossible.

Given more practice and a little more anticipation, and we were able to slow the Fluence Z.E. down using accelerator lift-off regenerative braking only.

However, when it came to wet roads, the Fluence Z.E. wasn’t quite as well-mannered as its all-black leather interior and benign dials would suggest.

Accelerating from standstill, our car behaved impeccably -- but our first test car struggled to keep control of the motor’s 166 foot-pounds of torque when accelerating while moving.

Even with traction control engaged, the car’s front wheels wanted to loose grip on the wet roads too easily. Switch off traction control, and the car became un-drivable.

We enjoyed our 150 miles of driving the Fluence Z.E., and loved the car’s quiet interior and comfortable leather seats.  However, the Fluence’s uninspiring 0-62 mph time, combined with mediocre handling left us feeling... a little apathetic towards this Gallic car.

It isn’t that the 2012 Renault Fluence Z.E. isn’t a good car either. It’s a perfectly functional car with plenty of merit. But when it comes to handing out fun, the Fluence Z.E. must have skipped class that day.

Then again, the Fluence Z.E., as Renault is keen to point out, isn’t a consumer-facing car. It’s primarily a fleet car -- with over 80 percent of cars heading to the fleet market.

For the fleet market, the Fluence Z.E. is perfect. It’s simple to drive, requires no pre-existing knowledge of electric cars, and even comes in corporate-friendly shades of blue and grey and white.  Add to that the ability to switch out the battery pack in countries where Better Place is established, and the Fluence Z.E. is the ultimate fleet vehicle.

Sadly however, what works in the corporate sector rarely works in the home market. Like the ubiquitous office computer of old, the Fluence Z.E. is too businesslike to be a family car.

In short, it’s too beige, too straight-laced.

But there’s hope. While we -- and Renault -- say the Fluence Z.E. won’t be sold to many private buyers, the concept of producing a simple-to-drive, conventional-layout electric car is a good one.

Renault’s next highway-capable electric car -- the 2013 Zoe -- promises impressive performance and ultra-rapid 30-minute onboard recharging in an all-new hatchback design.  But like its alliance sibling the 2012 Nissan Leaf, the Zoe looks to be heading the way of a gadget-filled techno-car for younger drivers who want to proclaim their green credentials.

Our only hope is that someone at the Renault-Nissan alliance listens, and produces a car which is both conventional in its design, but a whole lot less beige to drive.