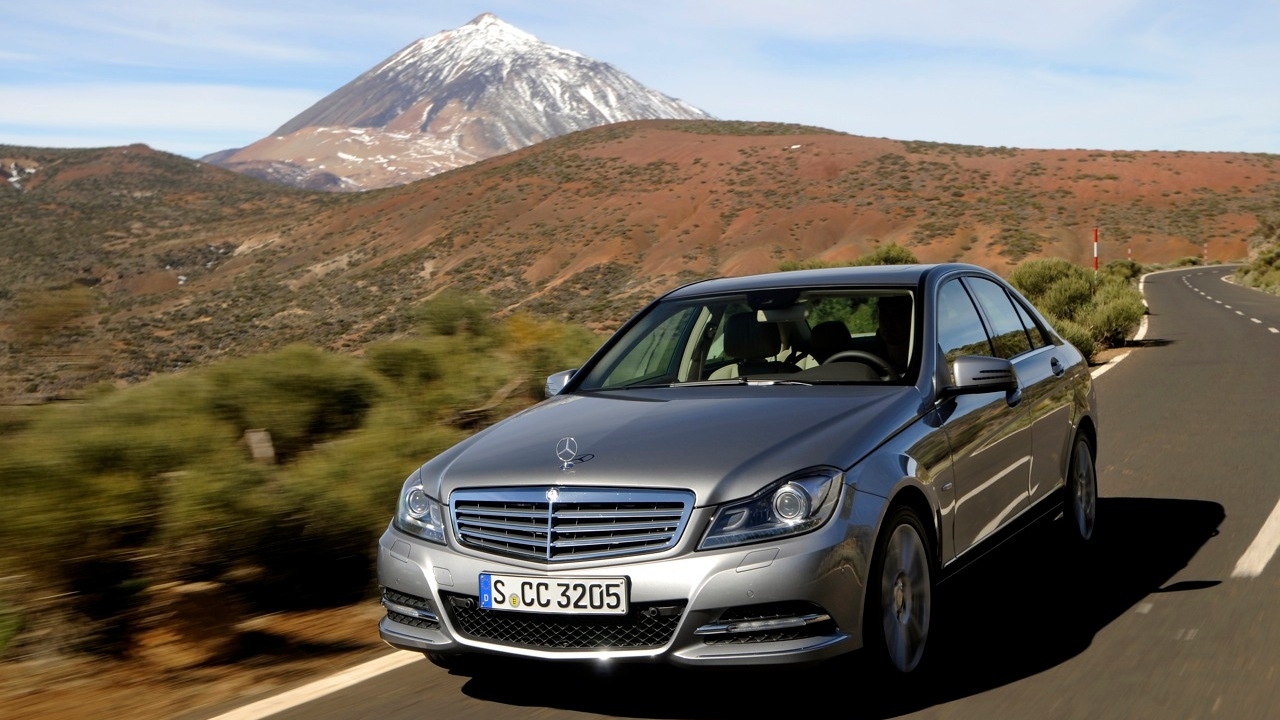 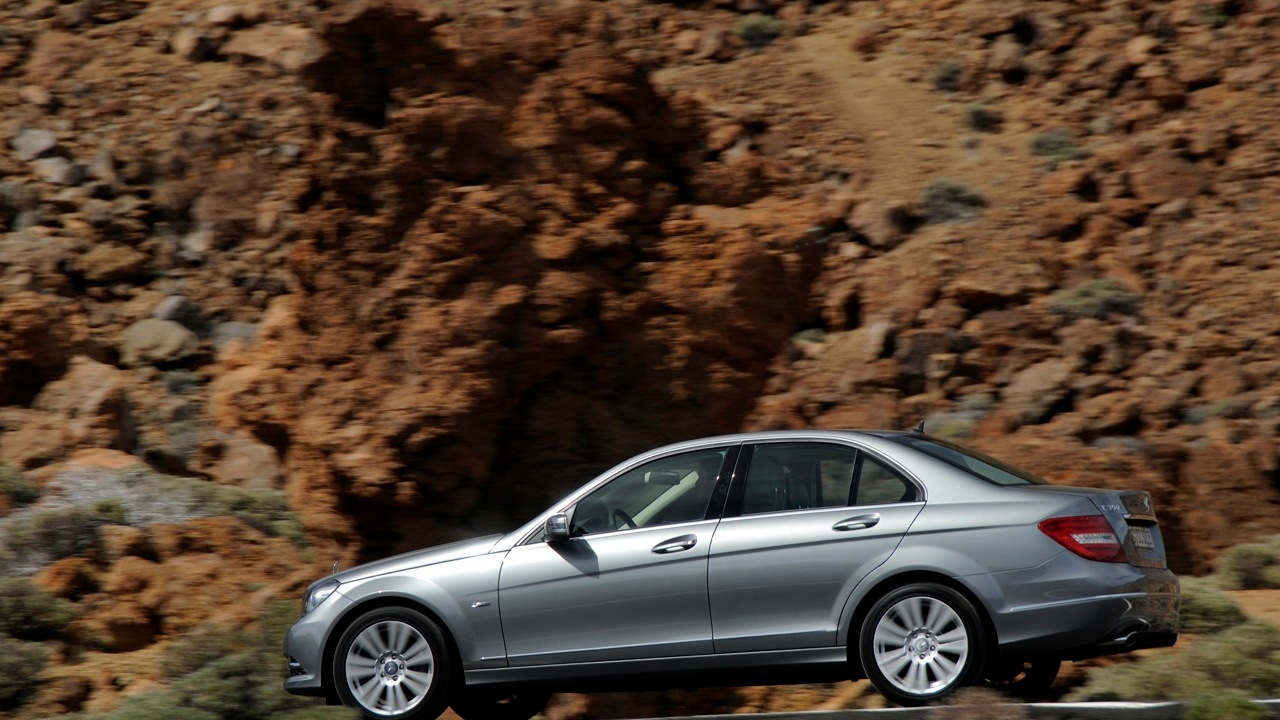 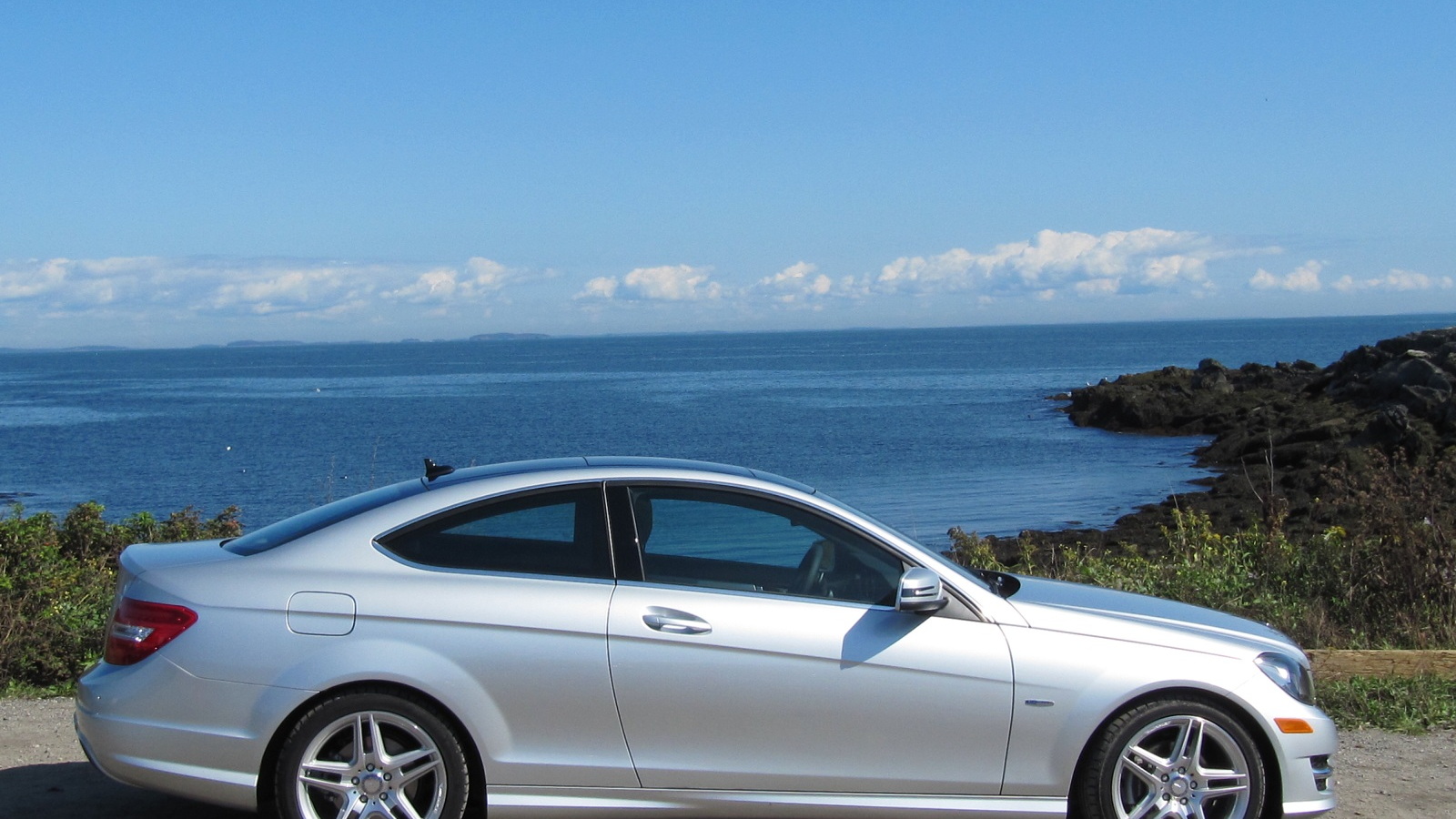 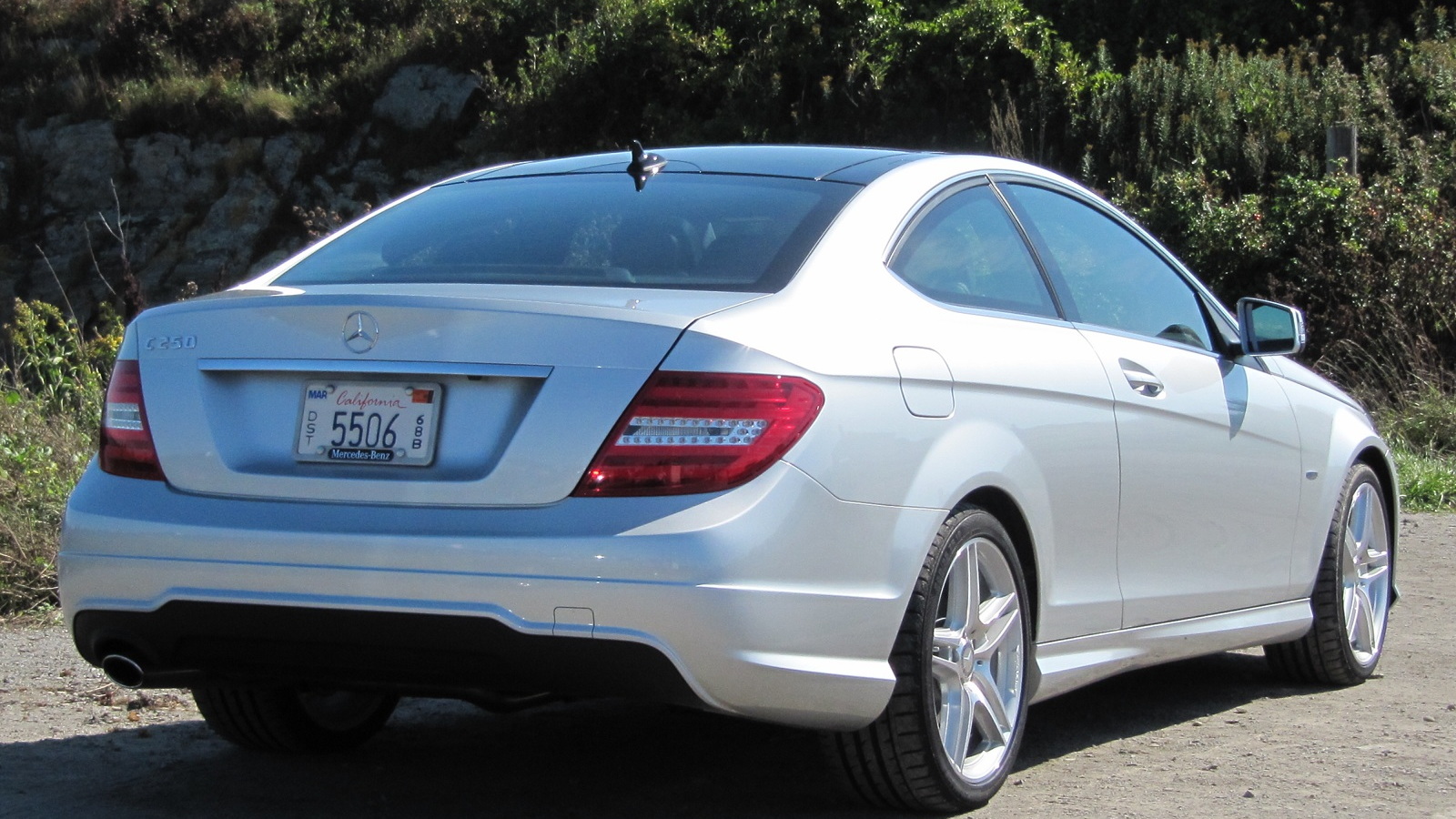 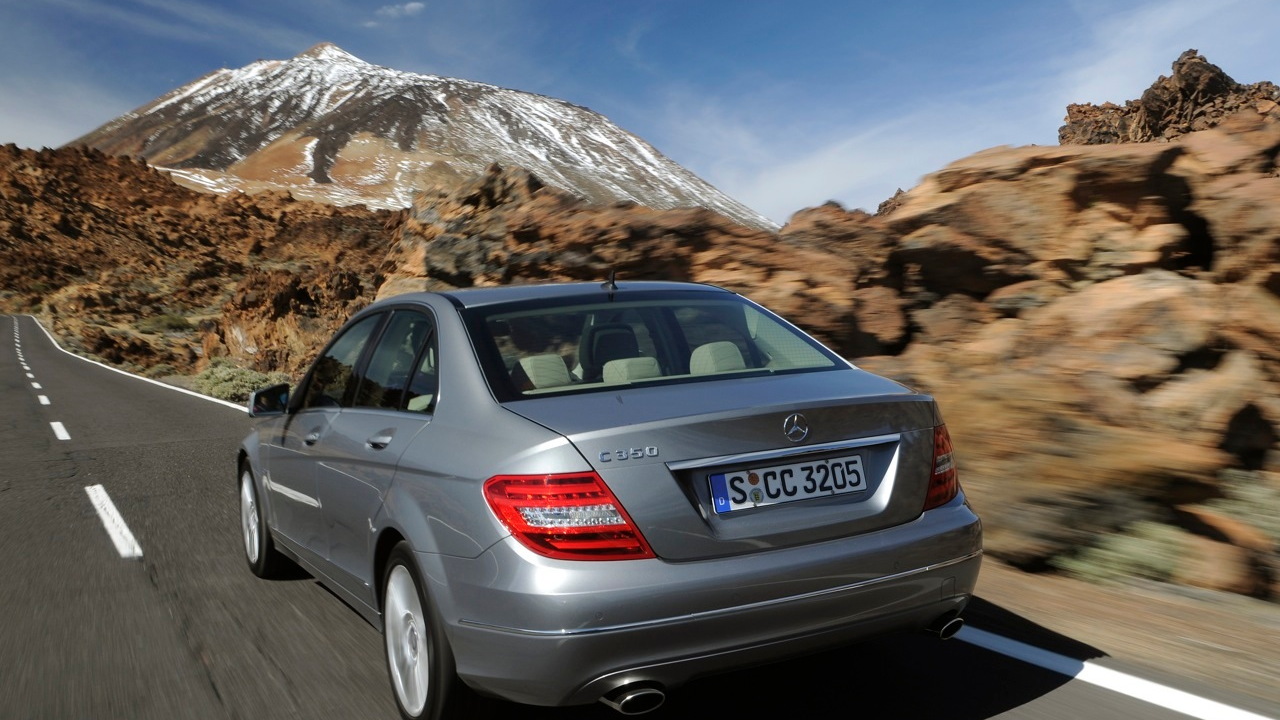 The onslaught of four-cylinder engines into vehicles that previously wouldn't have had anything lower than six cylinders continues.

It's in the service of gas mileage, and the 2012 Mercedes-Benz C 250--with a 1.8-liter turbocharged and direct-injected four putting out 201 horsepower and 229 pound-feet of torque--is rated at 21 mpg city, 31 mpg highway, giving it a combined rating of 25 mpg.

Mercedes-Benz expects 40 to 45 percent of its C-Class buyers to opt for the four.

So what kind of real-world mileage did we get in the new four-cylinder C-Class, the highest volume U.S. model for Mercedes-Benz?

On a five-hour trip covering 220 miles, including a climb most of the way up New Hampshire's Mount Washington (elevation 6,288 feet), the digital display on our C 250 coupe showed 27.7 mpg at an average speed of 43 mph.

The one caveat we should note is that almost the entire trip was on secondary and two-lane roads; there was no opportunity to hammer the 2012 C-Class down freeways at  prevailing 70-mph-plus speeds. Your mileage may vary.

Mercedes-Benz is hardly the only maker that's relying on higher-efficiency fours to replace base-level V-6 engines. Others include BMW, Hyundai, and various General Motors brands.

For 2012, Mercedes-Benz has substantially revised the C-Class as it nears the midpoint of its life cycle. But you'd never know it on the outside, despite the 2.000-plus parts the company says it redesigned, with the changes largely confined to mechanical parts and a brand-new interior. 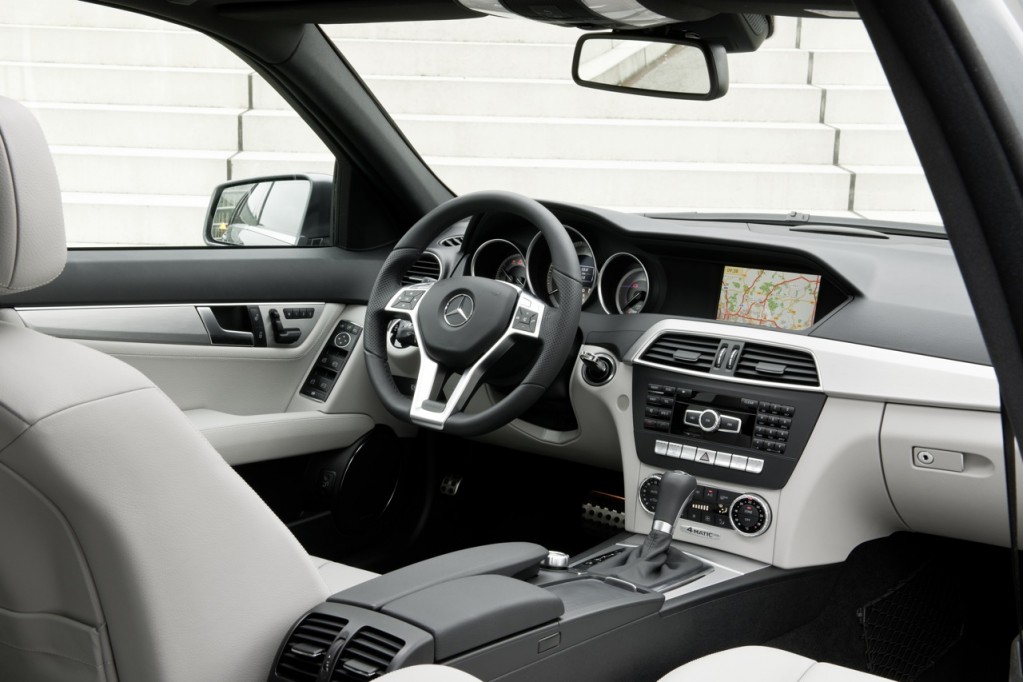 The exception is a new body style for the C-Class, a genuine two-door coupe that lines up neatly against the coupe version of the BMW 3-Series--against which the C-Class is often compared.

Mercedes-Benz executives referred routinely to the new style as a "true coupe," a "real coupe," and a "genuine coupe," underscoring the need for a two-door vehicle with a trunk--rather than a hatchback--in the U.S. market.

We think the coupe is handsome, if less distinctive than the larger and very aerodynamic E-Class coupe introduced a couple of years ago. But the carmaker says coupes will likely make up less than 10 percent of all C-Classes sold.

The C-Class coupe is definitely smaller in the rear seat than the sedan. A 6-foot person's head touches the headliner--meaning it bumps, not grazes--although the legroom is adequate if front-seat passengers are willing to move up a couple of notches.

Mercedes-Benz gets points for making the rear compartment lighter than most, by fitting a full-length panoramic sunroof as standard on the coupe. With the sun screen rolled back, rear-seat passengers don't feel confined to a dark cave as they do in the rear of so many other coupes. 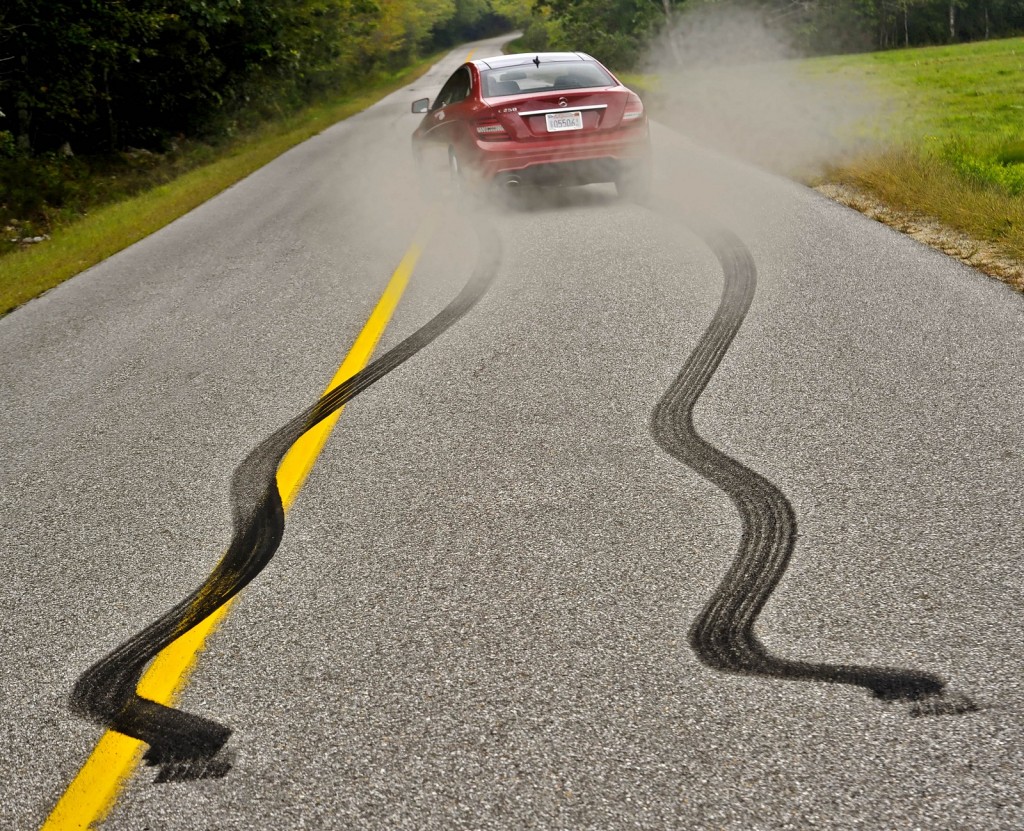 Both engines are mated to the Mercedes-Benz seven-speed automatic transmission. For the first time, the C-Class no longer comes with a manual transmission on any model.

Having that many gears allows a transmission to be tuned to keep the engine turning at very low speeds, cutting fuel consumption. But the tradeoff is that to get acceleration on demand, the automatic has to kick down--and we found it often had to downshift two gears, not just one.

That issue applied to both engines, but we found it exacerbated in the C 250 by noticeable turbo lag. Altogether, it could take 2 or 3 seconds for the turbo to spool up enough to bring on the power for passing, while the transmission simultaneously downshifted from, say, 7th to 5th gear.

It took us awhile to get used to this, but there's a simple solution. All C-Class models for 2012 are fitted with paddle shifters behind the steering wheel. A simple double tap on the left paddle brought up the revs, and positioned the car for those quick passes on two-lane rural roads. 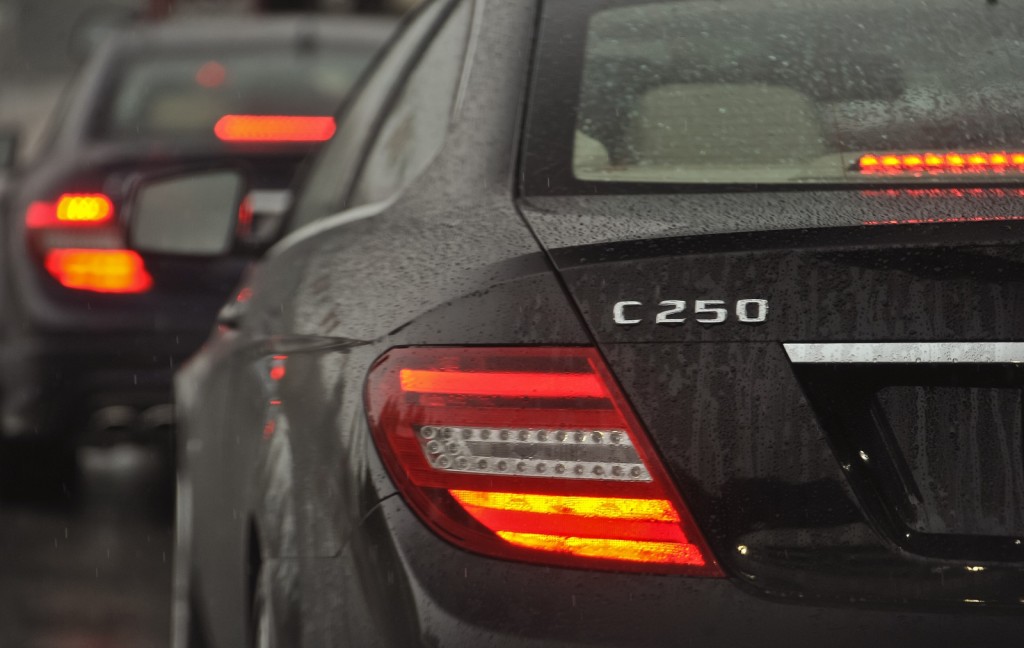 Do Mercedes-Benz buyers often shift their own gears, let alone using paddles behind the wheels? We're not sure about that, but we suspect that C 250 owners will want to learn fairly quickly.

Unusually for a mid-cycle refresh, the new C-Class interior includes an entirely redesigned dashboard. The soft-touch plastics are an improvement over the previous generation's hard surfaces, and a larger 5.8-inch display is mounted high up where it's easiest for the driver to see.

In terms of styling, Mercedes seems almost to have taken a leaf out of the Audi book, with its simple geometric black surfaces highlighted by a restrained piece of angled matte silver trim.

Despite the profusion of identical, rectangular black buttons (we counted roughly two dozen), the controls are fairly easy to use, and the type and graphics on the new display are definitely a step up. 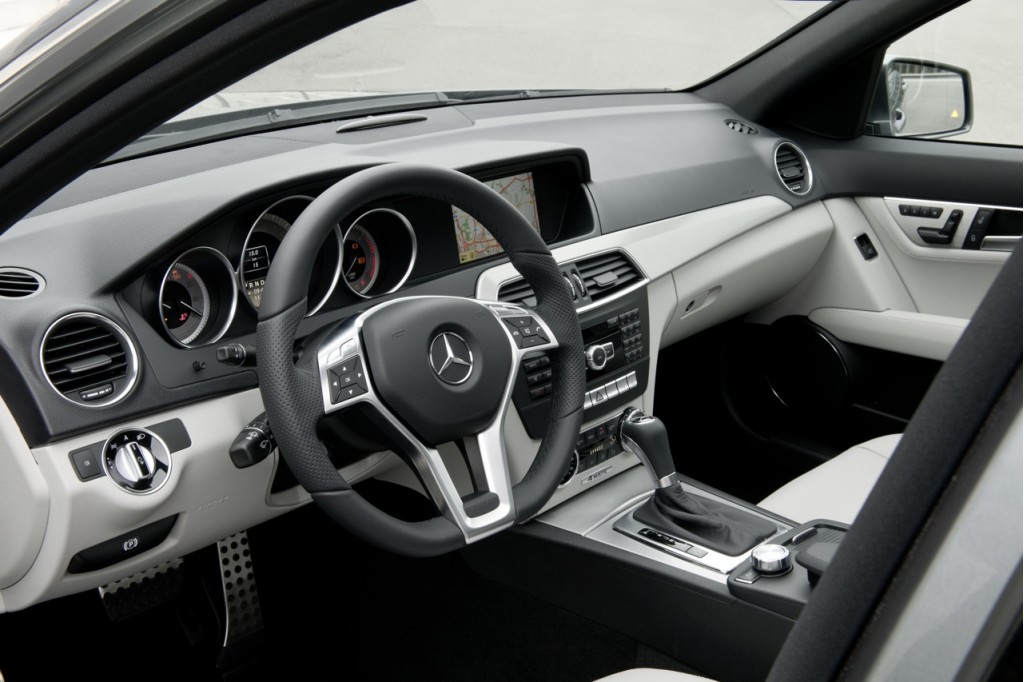 The rear seat is not only tight, however, but made up of two bucket seats with a hard-plastic cupholder insert between them. You'll only really want to put children or small adults back there anyhow.

The 2012 C-Class sedans have already arrived at Mercedes-Benz dealers, and coupes will have joined them by the end of this month.

Mercedes-Benz provided airfare, lodging, meals, and a lot of entertainment--planned and unplanned--to allow High Gear Media to bring you this first-hand drive report.