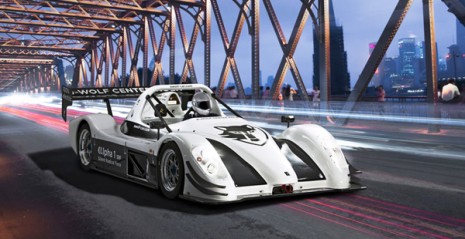 While the major automakers whittle away on their electric car developments, a small German firm by the name of e-Wolf has been building and selling a range of electric vehicles including small scooters, full-size commercial vehicles and high-performance track cars, for several years now.

e-Wolf’s latest development is the new Alpha 1 SRF, a stripped out racer with nothing but the bare essentials included.

Like the Formulec EF01 electric race car we saw earlier this year, the e-Wolf Alpha 1 SRF is designed strictly for the track. The chassis, for example, is sourced by British firm Radical Sports Cars and seats only two. It doesn’t even have a roof!

Power comes from a pair of electric motors with a combined rating of 280 kW (395 horsepower). They’re fed by a lithium-ion battery pack that weighs no less than 770 pounds and is itself rated at 41.5 kWh.

A full charge takes about eight hours using a regular household power outlet though the driving range is an impressive 186 miles. Limit your top speed to 31 mph, however, and your range increases to around 250 miles.

Of course, if you take the Alpha 1 SRF to its full potential, you can bet that the driving range will come down dramatically. e-Wolf claims the electric track car can accelerate from 0-60 mph in just 3.9 seconds and reach a top speed in 144 mph.

As much as we’d like to love the e-Wolf Alpha 1 SRF, its asking price of $306,000, before taxes, is just a little bit too lavish. Of course, for the money is no object readers, we think the car’s worth every penny.