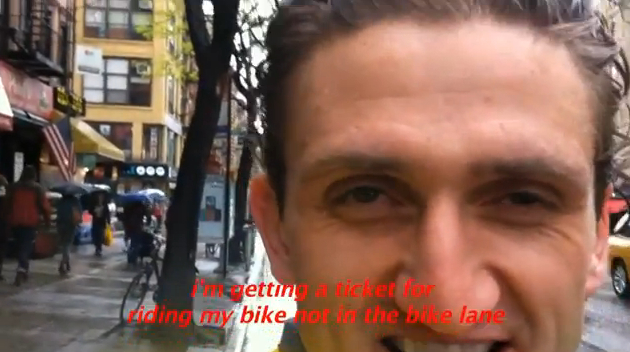 Hell, it would appear, hath no fury like a New York City bicyclist filled with righteous indignation.

Consider the case of Casey Neistat, a New York City bicyclist ticketed $50 for riding his bicycle outside of the designated bicycle lane. Despite his pleas that the bicycle lane isn’t always the safest place to ride (or even available to bicyclists), the ticketing officer was having none of it, and advised Mr. Neistat that bicycles ALWAYS need to use bicycle lanes.

To prove his point, Neistat put his cinematography (and stunt man) skills to work producing the video below, which demonstrates that “legal” doesn’t always translate into “safe” or even “practical.”

Adding insult to proverbial injury, after paying his fine, Neistat learned that his summons may have been invalid, since riding outside of designated bike lanes may not be illegal after all. Like all of us, he wants justice, and justice in this case is a crackdown on vehicles (including police cars) that illegally park in bike lanes.

He also wants his $50 back, and we wish him the best of luck in fighting city hall.