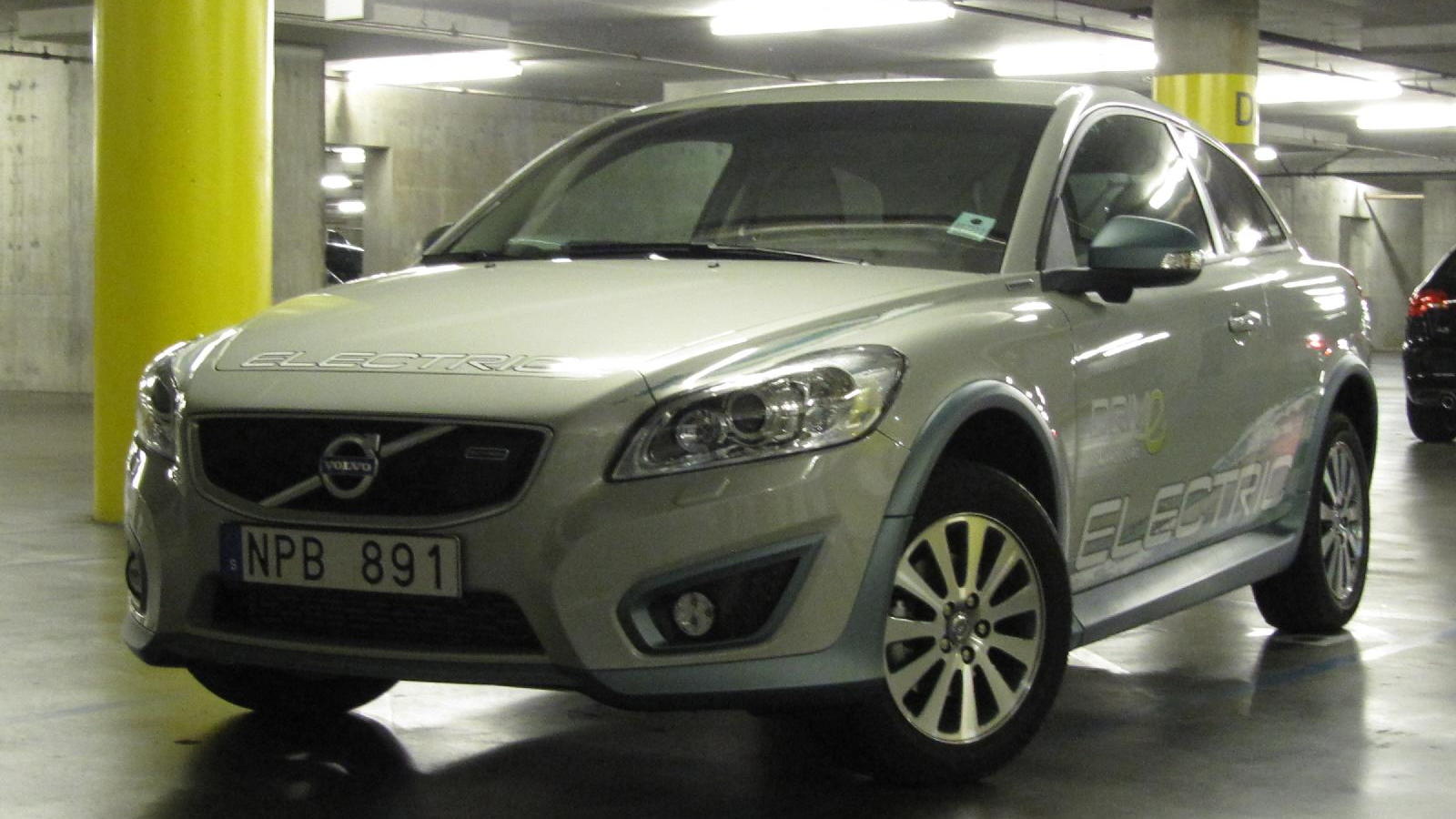 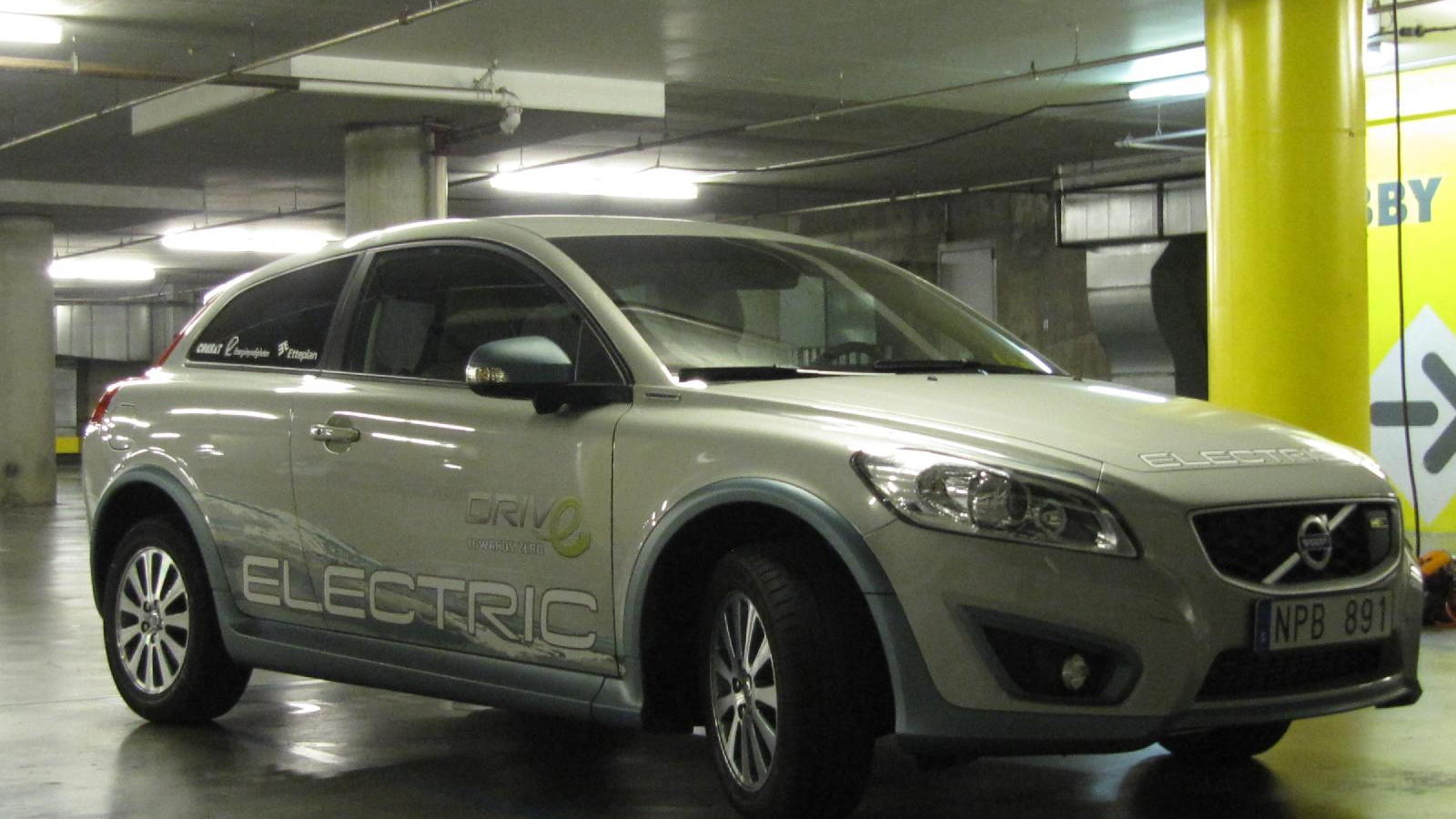 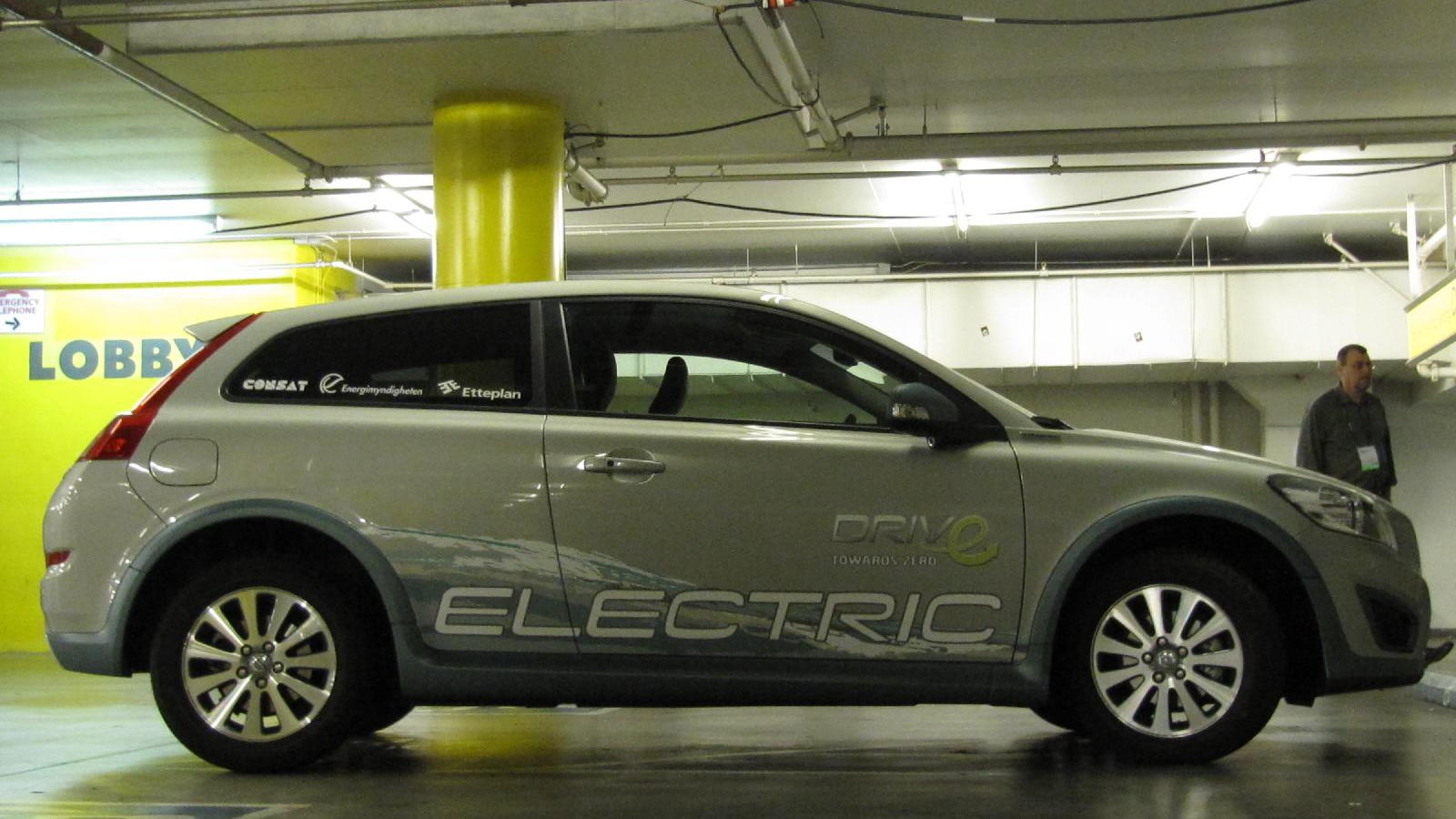 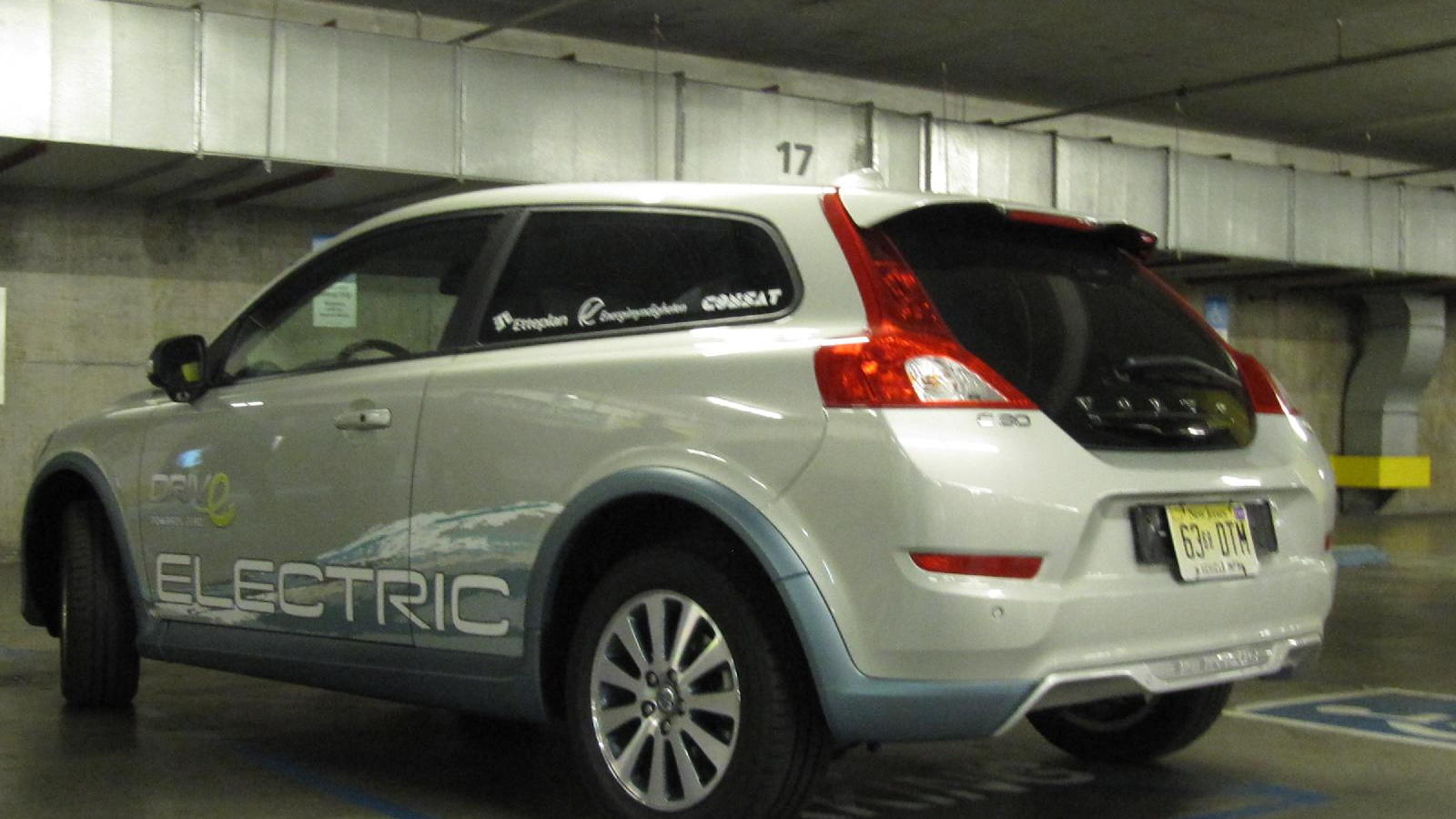 One of the great things about auto shows is the chance for journalists to drive prototype cars, especially at the Los Angeles Auto Show, known for its green-car test drives.

We got a chance to spend 20 minutes behind the wheel of the Volvo C30 DRIVe Electric car, with Volvo's Lennart Stegland in the passenger seat. He's the president and director of Volvo's special vehicles group.

The car we drove was fully fitted out, unlike one driven more than a year ago by Popular Mechanics editor Andrew English, which had only one of the two pieces of its battery pack installed--and a bad wheel bearing beside.

Starting the car, or booting it up, occurs in dead silence. There's no chime or tone to indicate that the vehicle is "awake" and ready to roll. Like the 2011 Nissan Leaf and 2011 Chevrolet Volt, the C30 DRIVe is fitted with simulated idle-creep, so lifting off the brake causes it to move forward.

That's a distinctly North American preference, Stegland agrees, and European drivers may prefer the car to behave as a manual-transmission car would, staying put until the accelerator is depressed.

Moving away from standstill, a whine from the electric motor increases in volume. It's barely audible at low speeds, but by 40 mph it's noticeable, though not intrusive. It signifies little more than that the car is a prototype. Chevy Volt engineers, for instance, eliminated audible motor whine entirely between pre-production prototype and salable car. 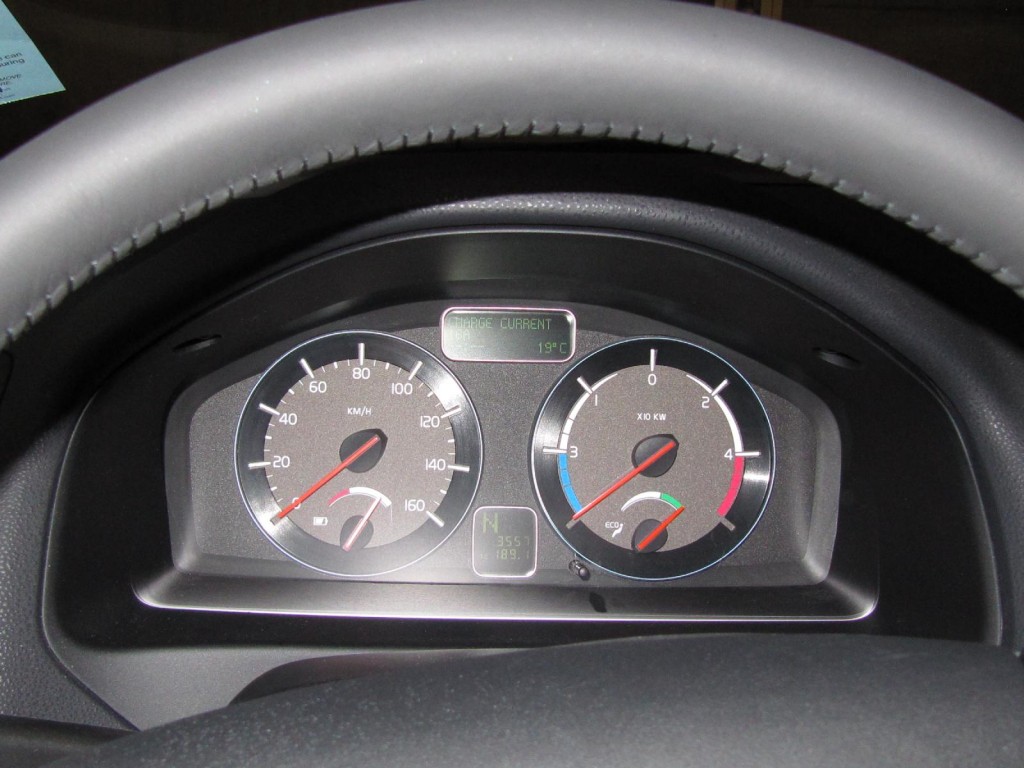 The acceleration is nicely progressive, though the car lurches slightly on sudden liftoff. Regenerative braking is aggressive, much closer to the one-pedal driving of a Tesla Roadster than the "normal" coasting of the Volt.

"We experimented with 'sail' mode," Stegland says, in which the car rolls unimpeded and regeneration kicks in only on braking. But the team had to "toggle it back" to recapture the maximum possible energy.

The Volvo C30 DRIVe Electric feels slightly heavy on the road. The weight differential, Stegland says, is presently about 120 kg (265 lbs), though the engineering team feels it can bring that down to as little as 40 kg (88 pounds) more than the heaviest gasoline version.

Volvo claims a 0-to-60-mph time of about 10 seconds. We conducted no timed acceleration tests, but that feels about right. The punchiest acceleration comes in the 0-to-35-mph range, where the C30 DRIVe competes decently with urban and stop-and-go traffic. Top speed is limited to 81 mph. 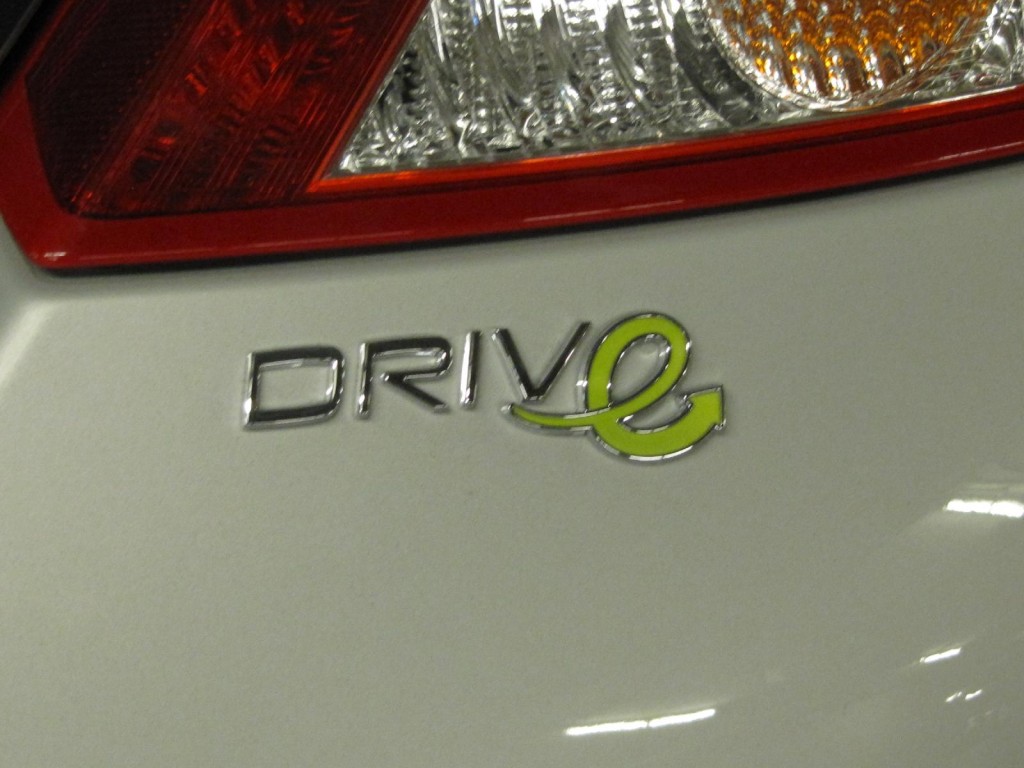 Volvo has greatly expanded its plans for the C30 DRIVe test fleet, which was first unveiled at the Frankfurt Motor Show in September 2009.

When the car appeared at the Detroit Auto Show in January, the fleet was to comprise just 50 cars. Now, says Stegland, that number has risen to 1,000, of which the first 40 will be built by the end of February.

More important for U.S. Volvo fans, the company changed its mind and will bring the C30 DRIVe test program to the States--or, at least, to California. Volvo had initially said it had no plans to bring the C30 to the U.S., limiting the fleet to Sweden, Belgium, and the Netherlands.

Now both the U.S. and China have been added to the test. China's not a surprising addition, since Volvo is now owned by Chinese carmaker Geely, and it has plans for as many as three car plants in that country--its first plants outside its native Sweden.

Orders for the C30 DRIVe are being taken first in Sweden--they started in October--where the company will also offer a separate test fleet of diesel plug-in hybrids based on its larger V70 station wagon.

Volvo claims a range of up to 90 miles for the C30 DRIVe. It gets 100 miles on the European test cycle, Stegland says, but its practical range is 80 to 85 miles.

It's fitted with a 24-kilowatt-hour lithium-ion battery pack using cells made by EnerDel. The pack is split into two 330-pound units, one fitted into the center tunnel and the other underneath the rear seat. The company uses fully 90 percent of the pack's energy, says Stegland, a higher proportion than in most other battery electric vehicles.

Asked about thermal management for the battery pack, Stegland said the current design uses air cooling. But, he hastened to add, "we are making provisions for liquid cooling (and heating) in the future."

An 84-kilowatt (109-horsepower) permanent-magnet motor drives the front wheels. Rather than choose an electric motor "off the shelf," Volvo had one designed specifically for its transverse installation.

Its unique design features a hollow motor output shaft that permits a second shaft to run through the shaft to power the wheel on the other side of the car, giving an exceptionally compact powertrain.

Since cabin heating via electric resistance elements can be a huge drain on the batteries of electric cars, Volvo has fitted the C30 DRIVe with a 14-liter ethanol tank that can fuel an ethanol-powered heater for up to two weeks. It's filled through the C30's standard fuel door.

Unfortunately, that was one feature we totally forgot about. We'd love to see a demonstration of the ethanol burner in action. Ah, well, next time ...

We look forward to getting our hands on a Volvo C30 DRIVe Electric car for a longer and more varied road test. We'll bring that to you as soon as we do.