Yesterday, with just one week to go before the 2010 Los Angeles Auto Show, Toyota released a few teaser pictures of the much-anticipated love-child of Toyota and Tesla - and told us when it will be unveiled.

The Toyota 2013 RAV4 Electric Vehicle is based upon Toyota’s popular compact crossover SUV gas-guzzler, but has an electric soul.   And on November 17th at 2:30pm Pacific,  the public will get to see it for the first time.

Announced earlier this year as part of an ongoing partnership between Tesla Motors and Toyota the RAV4 EV promises to offer a modern take on the classic RAV4 EV which was built between 1007 and 2003 and for many years became a yard-stick by which all other EVs were measured.

Toyota’s investment in Tesla has totalled over $110 million, split between an initial $50 million purchase of shares followed by an additional $60 million specifically for the development of the RAV4 EV. 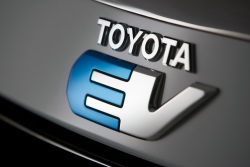 But as our own John Voelcker points out, Toyota’s initial order with Tesla is for around 2,000 cars, which equates to little more than a test fleet.

Until next week, all we have to go on are two teaser images, showing nothing more than the car’s logo and digital information display.

Using a convetional speedometer layout, the digital multi-function display where the odometer is situated displays a simple message on power-up. RAV4. Powered By Tesla. 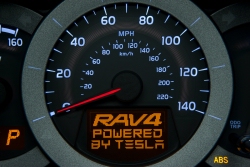 While the wording of the display is a little different to our own speculation that the RAV4 could bear a “Touched by Tesla” slogan somewhere on it the outcome is just about the same.

Tesla needs Toyota’s RAV4EV to be a success from the day it is unveiled through to the day Toyota either buys Tesla’s technology or invests more money in the valley-funded firm.

Until then, we wait in anticipation and of course, will bring you a full report of how the Toyota Tesla RAV4 EV performs as soon as we can.