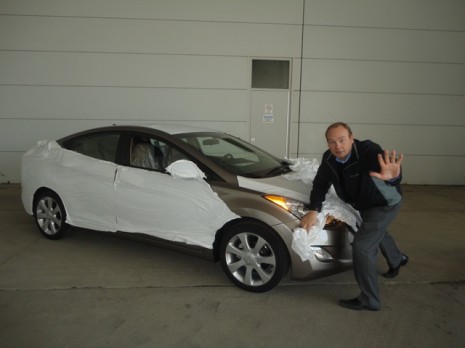 God knows, the spy-photo game has its moments. We can recall photographers hanging out of trees, held under arrest in federal custody, even buying and building on land adjacent to proving grounds just to grab the perfect shot.

This spy shot hits a little too close to home, as best-in-class PR guy Dan Bedore has clearly been caught in a career-threatening moment.

The car in question: the 2011 Hyundai Elantra, which makes its world debut in about a week at the 2010 Los Angeles auto show.

Until now, to find pics of the Elantra, you'd have to pay highly skilled spy lenses big money to get photos like these. Or maybe you could scan Hyundai's Korean-market Web sites. Or maybe, you could shop around the High Gear Media network, for literally dozens of photos we've scored from just about every corner of the Internet. It's not even, what would the kids say, a "worst-kept secret."

Nevertheless, the photographer here is putting Bedore in danger. He's not supposed to be in Alabama, for one thing. Good thing he's got all that...hmmm...what appears to be...tissue...on hand.

Stay tuned for links to a PayPal account to fund an early "retirement."