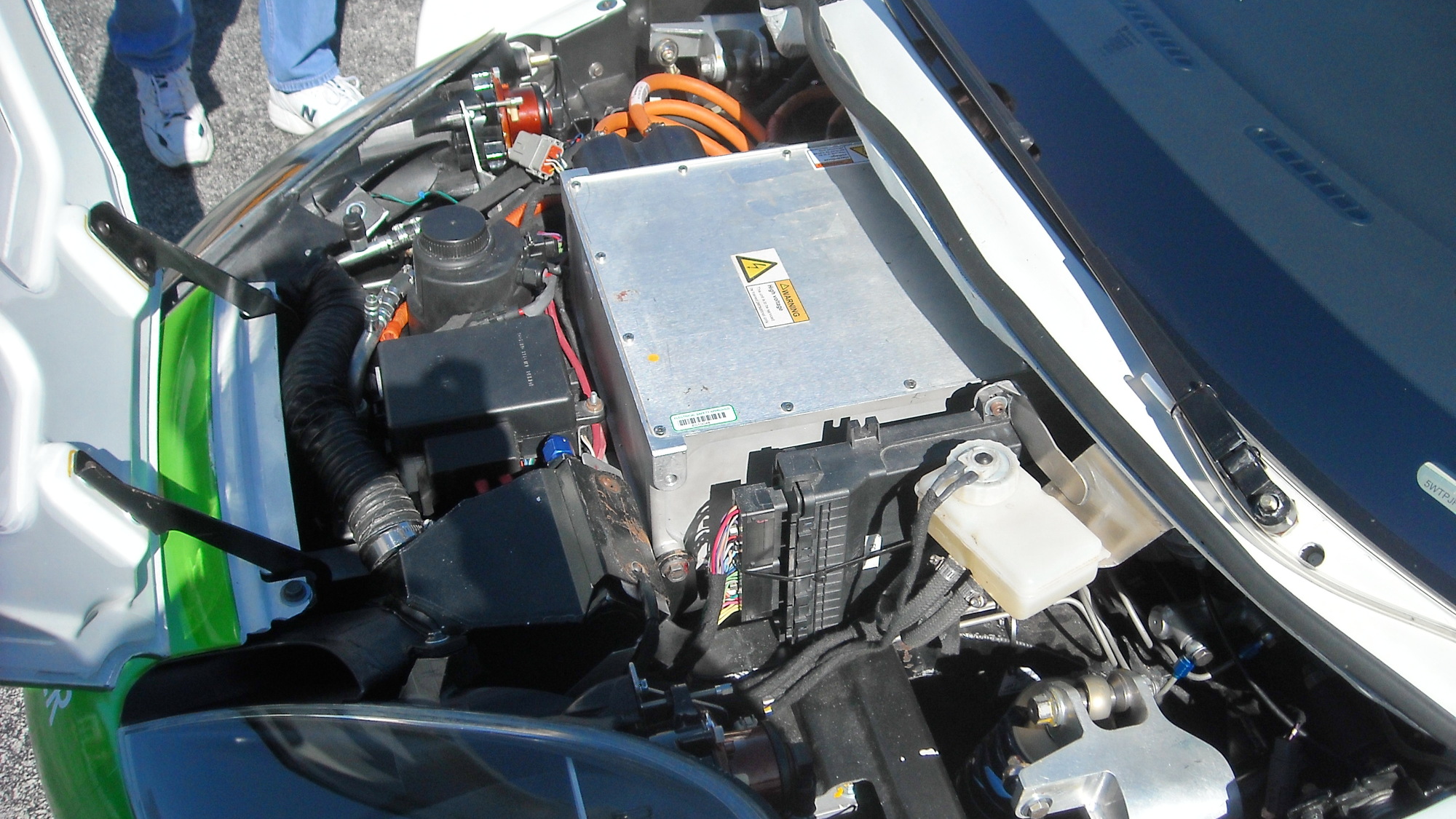 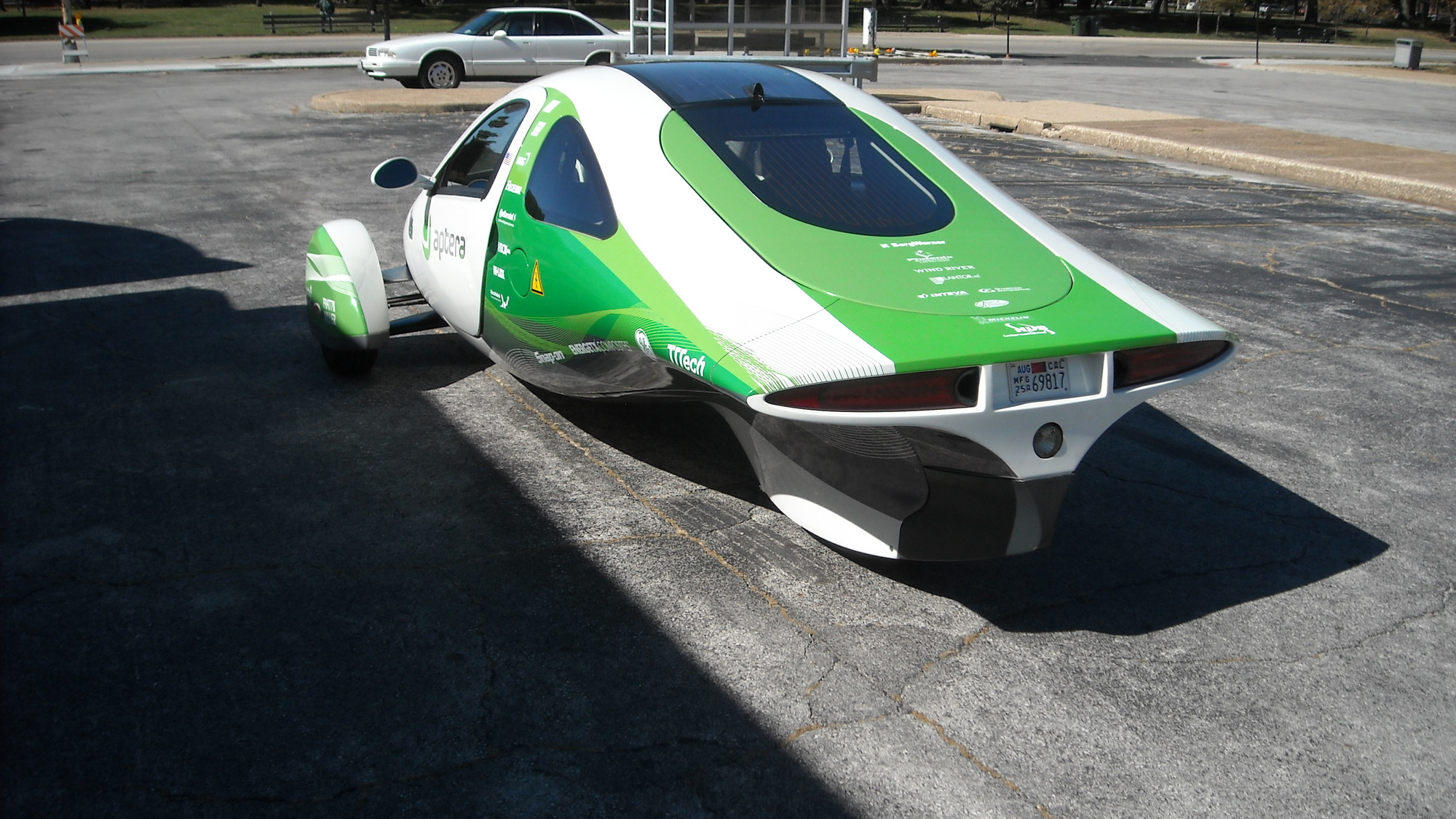 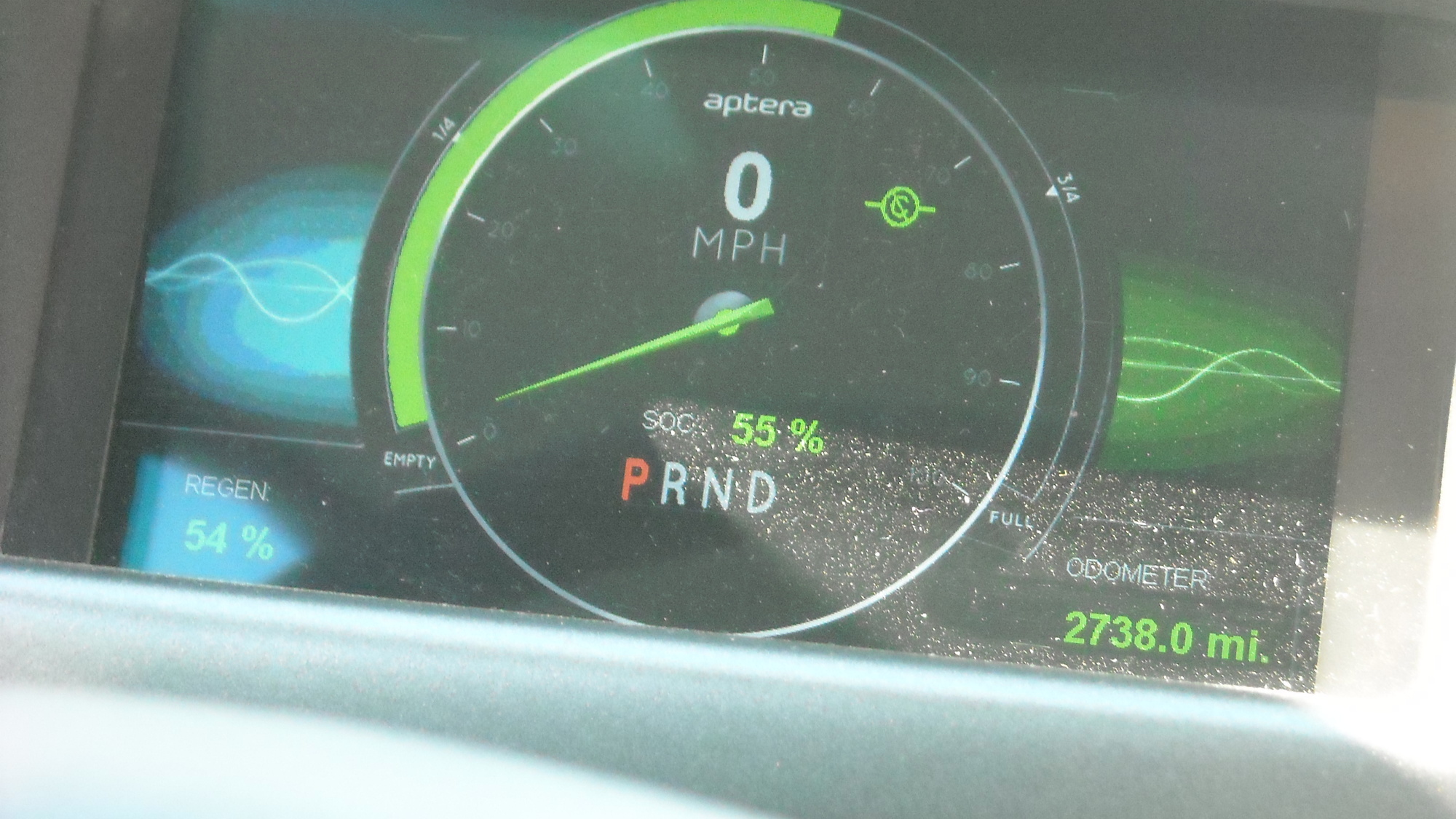 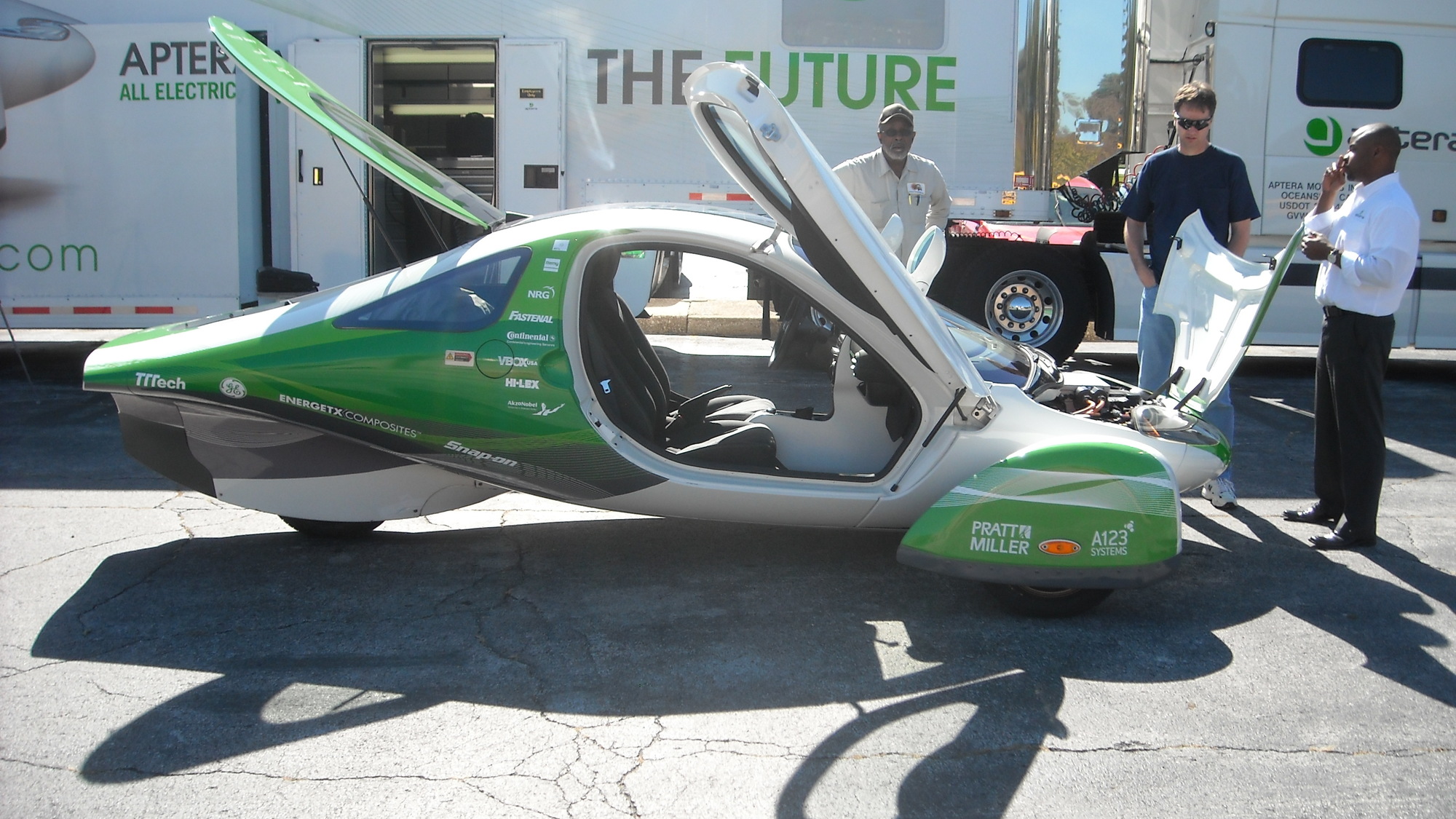 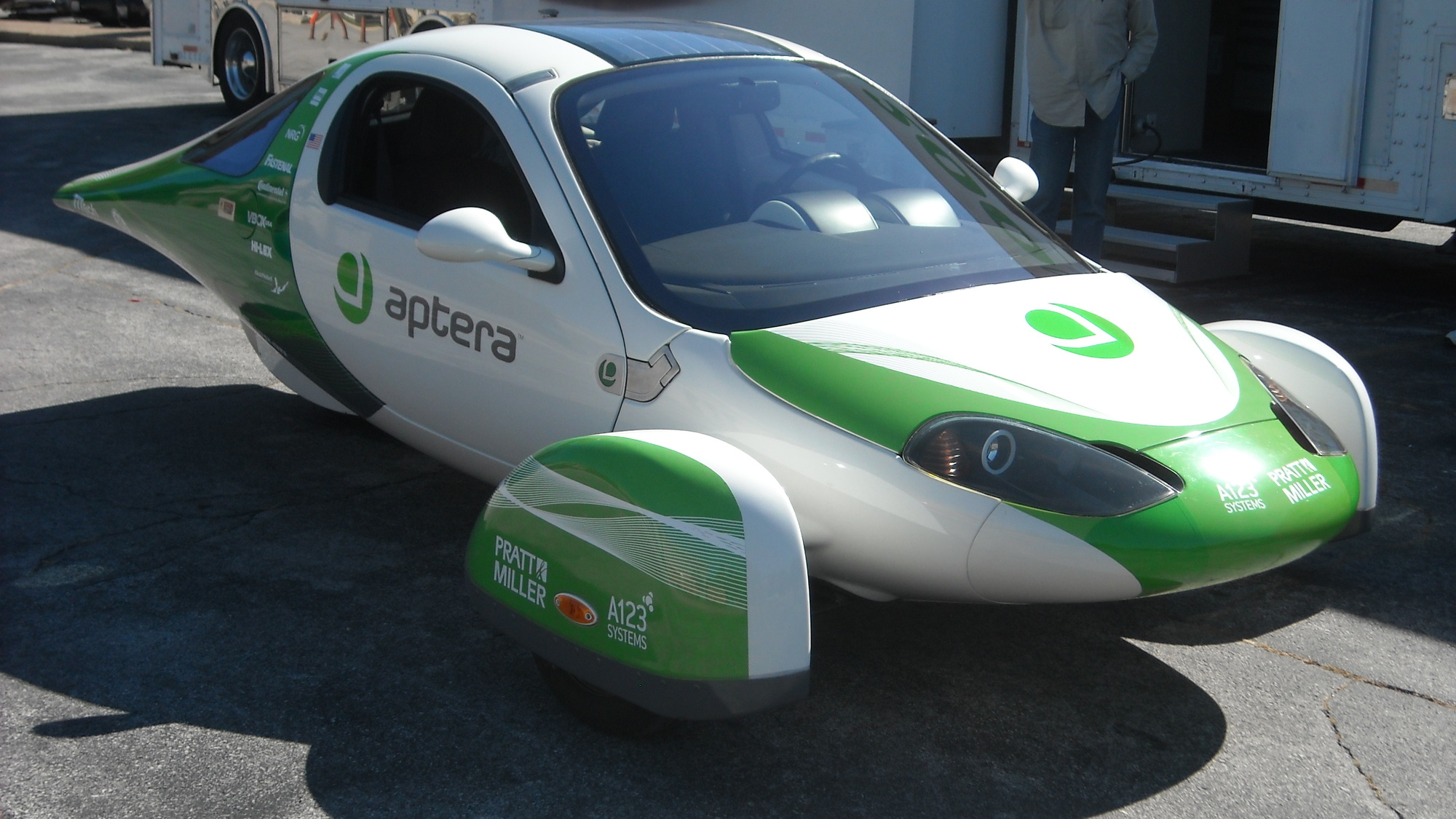 As electric cars make their way to market, one funky little vehicle has captured plenty of attention for its unusual looks. That would be the Aptera 2e.

The car is more than just an exercise in styling: Aptera plans to bring the car to market in late 2011.

To that end, the company has been bringing a fully drivable prototype to various cities throughout the country. I caught up with Aptera at a recent stop in Chicago, and I was able to take the car for a quick spin around the block.

First, some basics. The Aptera 2e is powered by an electric motor that makes 75 kilowatts of power, and that juice is supplied by a lithium-ion battery pack with a capacity of 20 kilowatt-hours.

The exterior styling is unique, to say the least: This three-wheeled, two-seat vehicle looks like it might achieve liftoff at any time. The company's goal is the lowest drag coefficient (0.15) of any car ever sold. That reduces energy used, which increases range.

Solar panels on the roof power the climate-control system, and the two doors scissor open. A long and tapered rear hides the cargo area.

Inside, the cockpit is cramped but livable, and all the basic amenities--air conditioning, radio, cruise control--are there. The steering wheel--which looks a lot like one out of a Chevrolet Corvette--tilts and telescopes, although the seats are adjusted manually.

To save weight, the Aptera doesn't have power-assisted steering or power-boosted brakes. However, the regenerative braking feature can be used to assist drivers with braking.

A round dial on the outside collar of the gear selector controls the amount of regnerative braking. The more that's dialed in, the more the car slows as soon as the driver lifts off of the throttle.

When the regenerative braking percentage is dialed down, the pedal needs to be pushed hard in order to arrest forward motion. But at higher amounts of regenerative braking, the car begins to slow so quickly it's as if an invisible foot has slammed on the brakes.

Indeed, it's for this reason that the brake lights illuminate whenever a driver lifts off the throttle.

The ride is firm but not punishing, and the 2e moves away smartly from a stop. Handling appears to be on the sporty side, with the manual steering providing connection to the road.

The lack of power assist for the steering doesn't go unnoticed. Nor does the small rear window--a rearview camera built into the audio system works even when the car is moving forward, in order to provide some semblance of rear visibility.

The gauge cluster consists of a digital speedometer surrounded by a lighted ring that indicates battery state of charge. Two numbers are listed in percentage, as well: state of charge and regenerative braking.

On each side of the speedometer are open spaces that will eventually display other data.

Despite the presence of A/C and an audio system, the Aptera's cockpit feels more businesslike than luxurious, at least in part to the weight-saving measures.

Aptera says the car can travel up to 100 miles on a charge, with a top speed of 90 mph (our tester was governed to 60 mph). Charging times vary from eight and a half to ten and a half hours on a 110-Volt outlet and from four to six hours on a 220-Volt outlet. 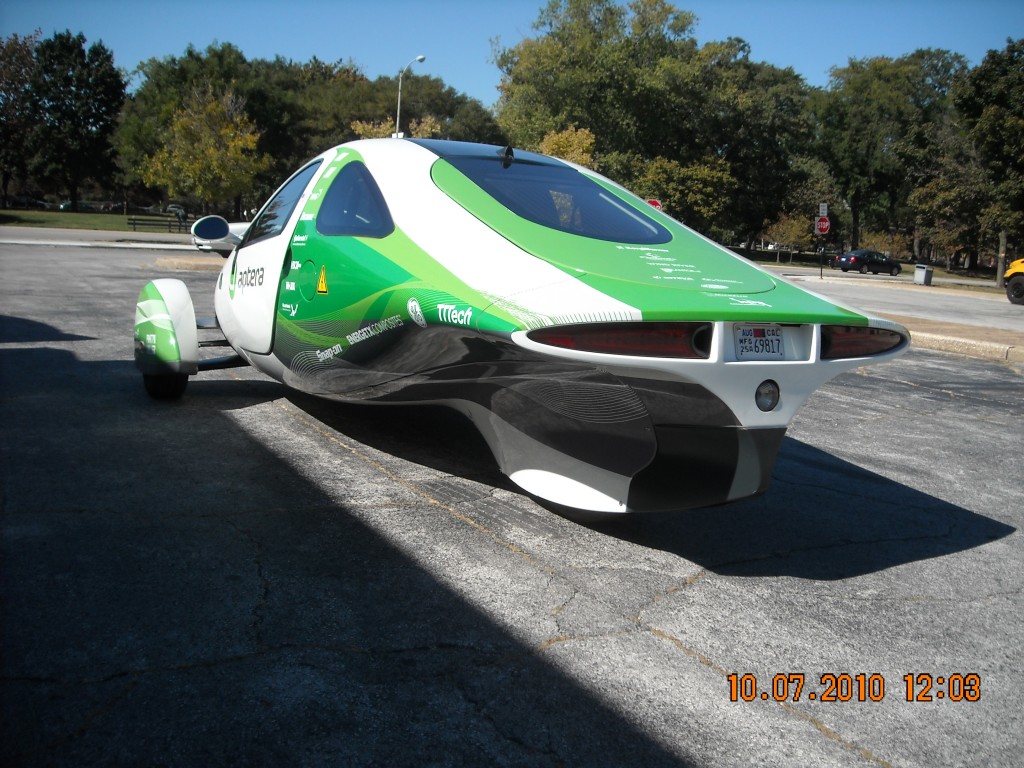 As noted, Aptera hopes to launch into production in December of 2011. A company spokesman told me that production will begin gearing up this December, if all goes well, in anticipation of the future launch.

The company claims it will add 2,500 direct jobs and 10,000 jobs through suppliers, and that the Aptera will be sold through existing dealerships that currently sell mainstream brands. Aptera also claims that 90 percent of the car's parts--including the batteries--will come from U.S.-based suppliers. Pricing has not been finalized, but you can reserve a car through Aptera's Web site by placing a $500 deposit.

The 2e will be built near the company's headquarters in Oceanside, California, but future vehicles (e.g. a more traditional sedan) will be built at unspecified locations in the Midwest. When pressed about what future models that company might produce, all the spokesman would confirm is that a sedan is in the works.

"2e" stands for 200 mpg equivalent, and while it's tough to verify those claims without independent testing, my brief drive around Chicago's South Side confirmed that the Aptera works, even in prototype form.

How well it works, however, may be in the eye of the beholder. For an urban runabout with quirky styling, the two-seater fits the bill. As a daily driver? Well, that will depend on what your daily drive is like ... and on how much of an entrance you like to make.