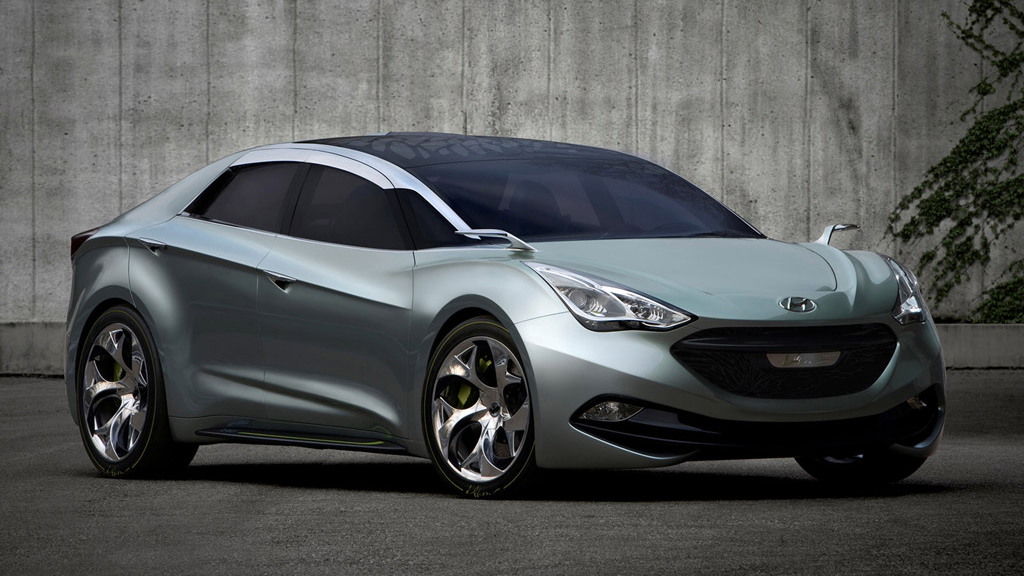 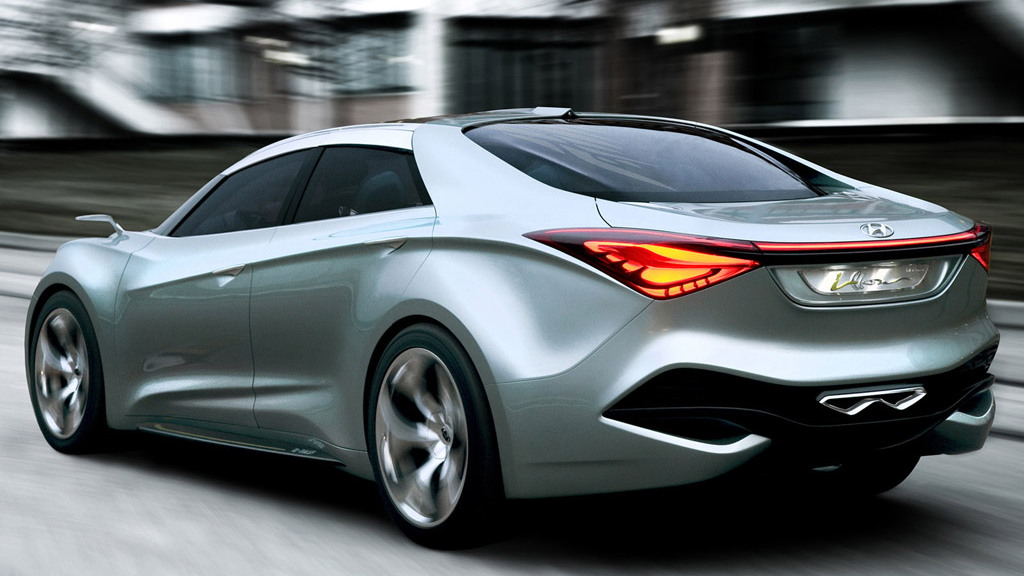 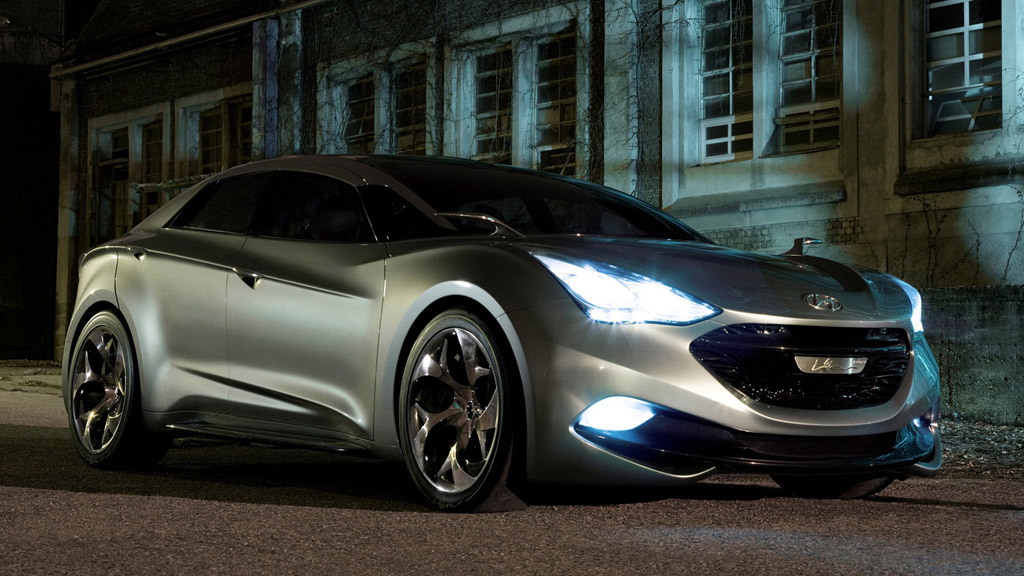 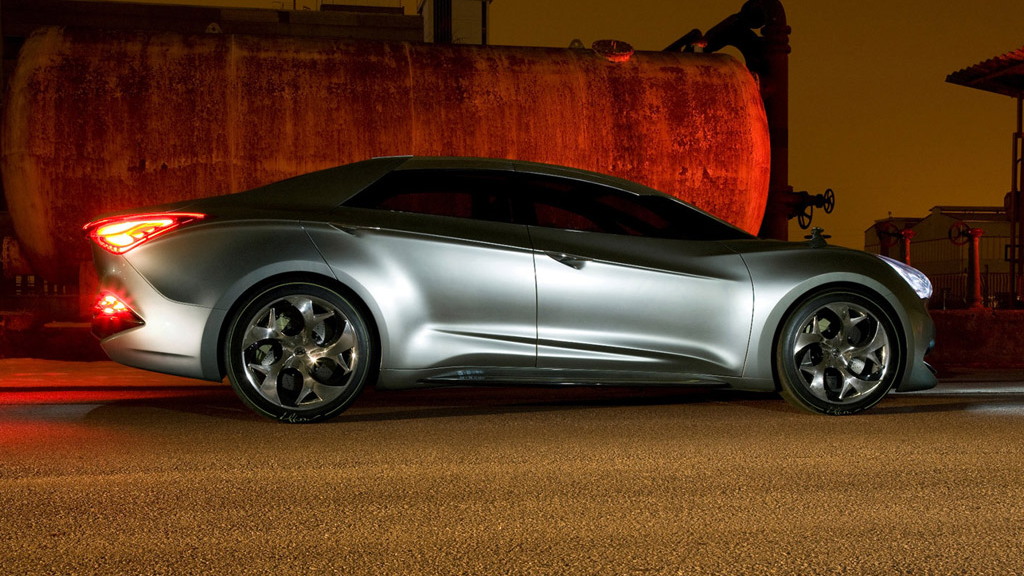 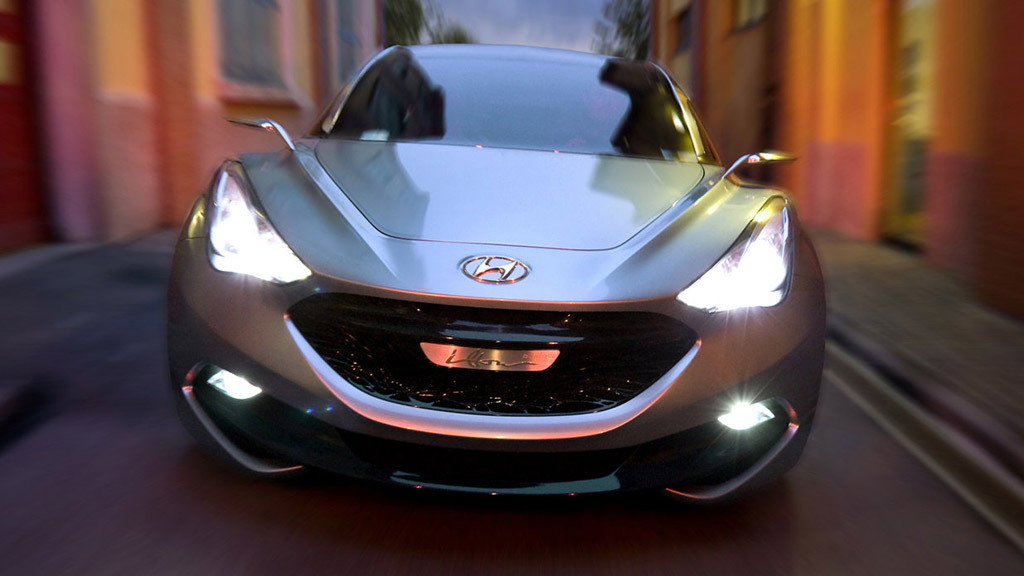 The 2010 Geneva Motor Show is over, but we realized that we missed out on covering one significant vehicle: Hyundai's i-flow diesel hybrid concept.

While the first gasoline hybrid was the 1997 Toyota Prius, only this year will French maker Peugeot introduce the world's first production hybrid with a diesel engine, the 2011 Peugeot 3008 Hybrid4. Mercedes-Benz will follow with its 2012 E 300 Bluetec Hybrid.

Despite that pair, hybrid concept cars with diesel engines are still very much the exception. And they're even rarer from Asian manufacturers, who haven't historically offered diesel engines either in their home markets or for export--at least until recently.

But in the uber-European show at Geneva, Hyundai rolled out the i-flow Concept, whose shape previews its next large car, which will likely replace the current Hyundai Azera sedan and arrive next year as a 2012 model.

Designed by the company's German design studio in Russelsheim, the i-flow concept uses many of the same lines as the new 2010 Hyundai Sonata that is now on sale. Its drag coefficient is quoted as 0.25, the same as the slippery 2010 Toyota Prius hybrid.

With 50 percent of European new cars outfitted with diesel engines,  Geneva is the logical show for a diesel concept. The i-flow features a twin-turbocharged 1.7-liter diesel engine mated to an electric motor and a six-speed dual-clutch transmission powering the front wheels.

The electric motor is powered by lithium-polymer cells from Hyundai's partner LG Chem, letting Hyundai entirely skip the use of the nickel-metal-hydride cells fitted to current hybrids from Toyota, Honda, and Ford, among others.

Diesel in a blanket

The engine is insulated--Hyundai's engineers call it "thermal engine encapsulation"--to keep it at optimum operating temperatures by retaining heat when the car is switched off.

It takes 14 hours to lose its engine heat, against three for a conventional car; Hyundai says this cuts emissions and fuel consumption by 5 percent in summer, and up to 9 percent in the cold months.

Eco functions in the instrumentation include advice on how to minimize fuel consumption by shifting at the right points, and a navigation system that can calculate the route that uses least energy--based on both real-time traffic conditions and elevation changes on the route.

Hyundai is pursuing several hybrid initiatives, and has even shown its Blue-Will plug-in hybrid concept at auto shows around the world. Last July, its domestic-market Elantra LPI Hybrid sedan became the world's first production vehicle to use lithium-polymer cells.

A year ago at the 2009 New York Auto Show, it showed the Nuvis concept crossover, fitted with a 2.4-liter four, six-speed automatic transmission, and a 30-kilowatt electric motor powered by a 1.4 kilowatt-hour battery pack.

That is essentially the system it is expected to use in its first production hybrid vehicle, the 2011 Hyundai Sonata Hybrid, when it launches at the New York Auto Show in less than a month.

Hyundai has moved aggressively to position itself at the front of the fuel-efficiency pack. At last fall's 2009 Los Angeles Auto Show, it announced that it would no longer fit V-6 engines to its Sonata midsize sedan or Tucson compact crossover.