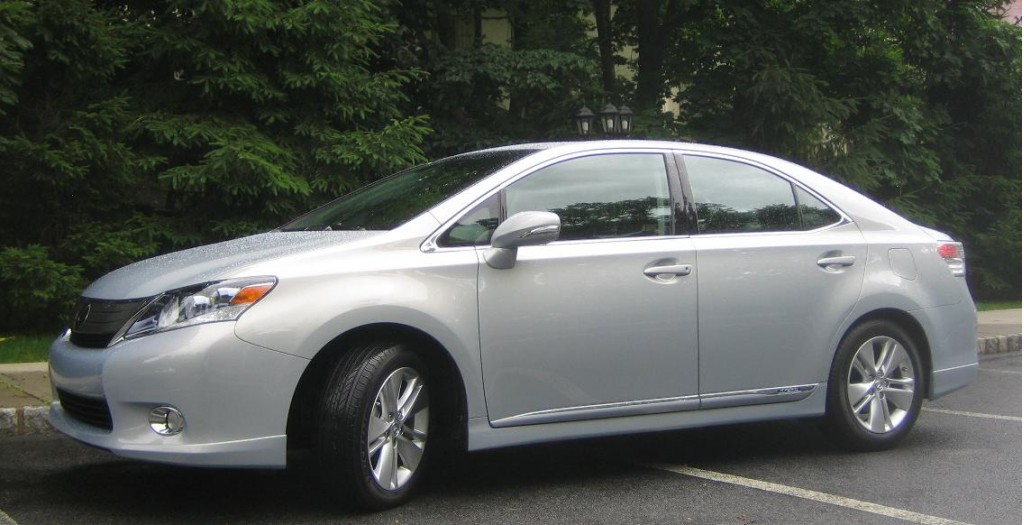 Setting aside our questions about whether the 2010 Lexus HS250h can create a new "luxury hybrid" niche, we spent much of Wednesday driving two of them through the rolling suburban hills of Westchester County, New York.

Overall, we think the HS is a bit of a puzzlement, neither fish nor fowl. We're left with the impression it may have been the product of a one-night stand between a 2009 Lexus ES350 midsize luxury sedan and the 2010 Toyota Prius hybrid.

We'll be spending a long weekend with a 2010 Lexus HS250h very soon, so we'll have an update on these first impressions then. Meanwhile, here's what we gleaned from half a day with an HS Premium model and half an hour with a standard model.

The 2010 Lexus HS250h has elements of the characteristic Lexus L-Finesse styling language, but they're wrapped around a vehicle with entirely different proportions than the LS full-size luxury sedan.

It's longer than the ES, but looks dumpier, with noticeable front and rear overhangs. We think the car's best view is the rear three-quarter angle, where the heaviness of the front is less visible.

Despite the proportions, though, Lexus has achieved an admirable 0.27 coefficient of drag, which clearly improves mileage at higher speeds.

The HS shares a wheelbase and some structural elements with the 2010 Toyota Prius, but it has a larger engine--2.4 liters rather than 1.8 liters--and it's several hundred pounds heavier.

Our impression was that the HS stayed in electric mode very, very little--far less than the 2010 Prius. Even when moving off with a gentle foot on the accelerator, the engine almost always switched on.

These factors give the HS250h a projected EPA combined rating of 35 miles per gallon, against a full 50 mpg for its 2010 Toyota Prius sibling. It's worth noting that a 35-mpg rating is far better than any other Lexus, even if it's lower than a Prius.

In practice, we registered 32.9 mpg after a short 10-mile trip and 36.1 mpg after a longer drive cycle with freeway and local roads, much of it hilly.

We drove the car without working to improve our mileage, but other journalists took to a mileage competition set up by Lexus with glee. The winner achieved 46.2. mpg, and two runners-up did better than 40 mpg.

So it's possible to make 40 mpg, if you pay attention. We wonder how many Lexus drivers--or perhaps HS buyers--will do so.

Sitting in the driver's seat, the base of the windshield is so high that the dashboard top curves up to meet it, preventing even taller drivers from seeing the front corners of the car.

In tight quarters, the Wide-View Front Monitor (see photo) on the navigation screen provides a measure of confidence. Without that option, it takes a bit of guessing to locate the corners. 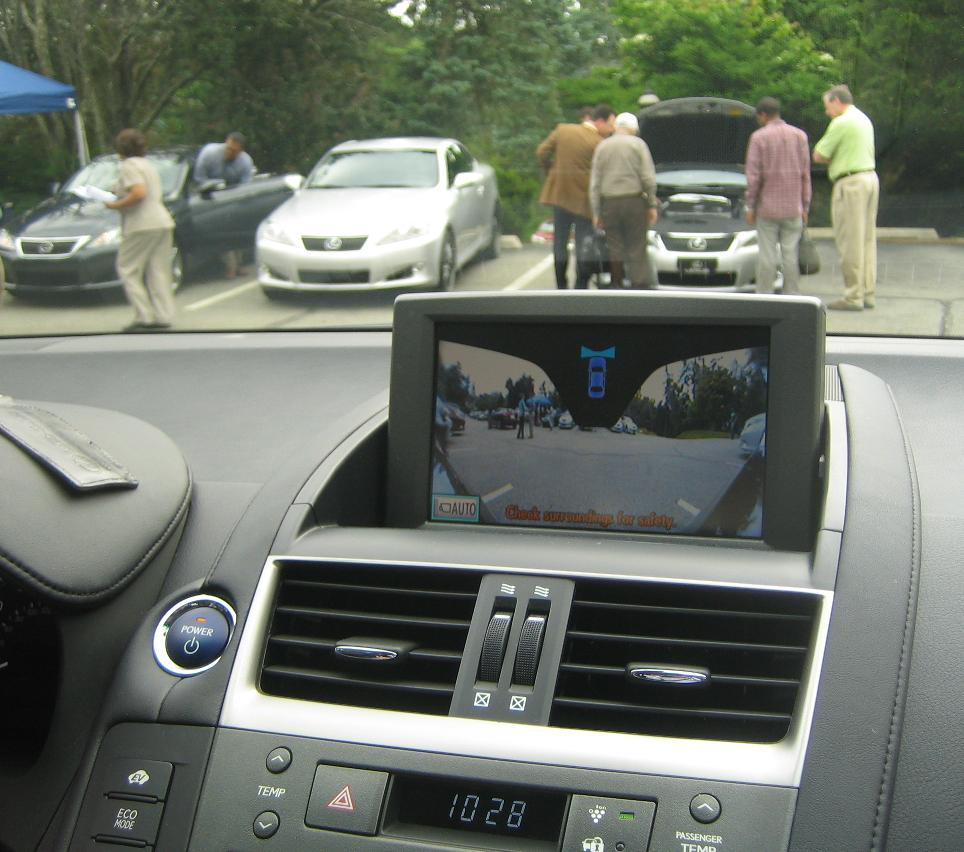 Before we got on the road, we were puzzled by the persistent emergency brake light. We repeatedly pressed the brake-release button below the shift wand, but it didn't solve the problem. To our surprise, the HS has a Sixties-style foot-pedal emergency brake. Golly.

On the road, the HS is less rewarding to drive than the sportier Lexus IS and GS sedans, which are rear-wheel-drive. It feels heavy for its relatively short wheelbase, and it didn't reward aggressive cornering.

And of course the Hybrid Synergy Drive system controls engine speed separately from road speed, so overall, we weren't encouraged to drive it hard. Perhaps that's the point?

Full acceleration is hardly head-of-the-pack, but the HS will keep up with traffic. The "Power Mode" button definitely makes moving off the line more sprightly, at the cost of gas mileage.

The "Eco Mode", on the other hand, brought performance down enough that the car had almost no acceleration left on uphill stretches.

The HS is clearly more refined inside than a Prius, with engine shutoff and restart far less noticeable. In many cases we had to check the instruments to work out if the engine was on--which it almost always was.

However, we were deeply disappointed by the tire roar and thumping ride from the optional 18-inch wheels fitted with the Premium trim level. We had a short drive in a base model with the standard 17-inch wheels, and those seemed less noisy.

Front seat accommodation was fine for two 6-foot-plus men, although the center console is offset toward the passenger side. This stints on room for the passenger's left knee, which touches the stack. The driver's right knee has a cutout, so no contact there.

The front seats looked and felt really nice, though. Lexus did a lovely job with the 10-way power adjustment in the Premium model, and we settled into either front seat with a pleased smile.

The rear seat doesn't appear spacious, but Lexus has done a lot of work to reduce the depth of the front-seat backrests. They're also quite arched, so in fact there was enough legroom for 6-footers in the rear, despite the front-seat headrest being closer than usual.

The steering wheel not only tilts but telescopes (powered on the Premium, manually on the standard), but even at full extension, the wheel felt a little too far away.

We were surprised that the front console drawer is too small to fit an iPhone, or indeed almost any smart phone.

The joystick on the console that operates the navigation display interface was well-placed and intuitive to operate. Like all such systems, owners will benefit from a detailed video tutorial on the system's many, many functions.

The Premium model offers "wood" trim inside, but the base model replaces it with shiny black plastic. The standard car, in fact, has a remarkable number of different shades and textures of black and dark plastic trim. It's very high quality plastic, of course, but we'd opt for the wood to warm it up a bit.

Our test drive was in a Smoky Granite Mica metallic Premium model with black interior (though we photographed a silver standard model).

Production models of the 2010 Lexus HS250h will reach dealers toward the end of August. Lexus has not yet released pricing for the HS. 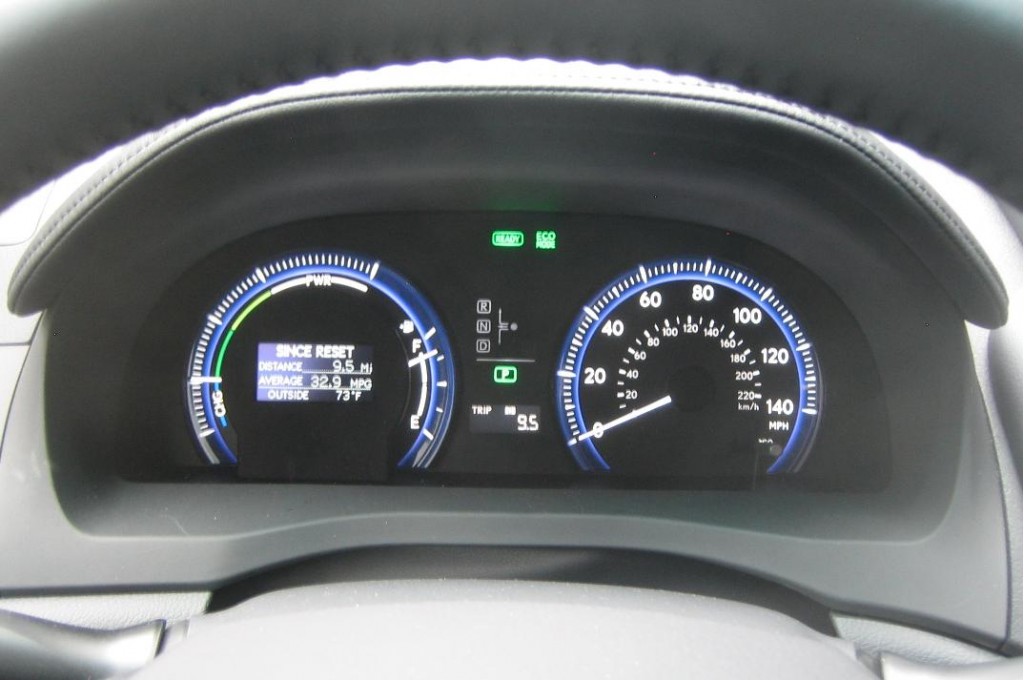 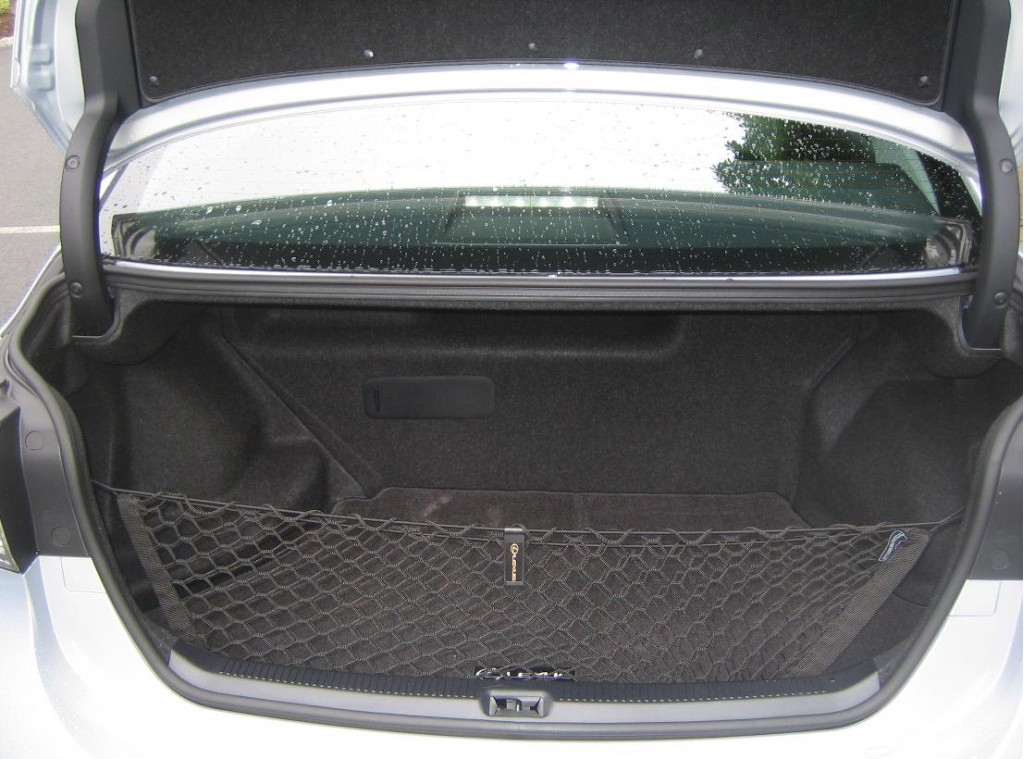