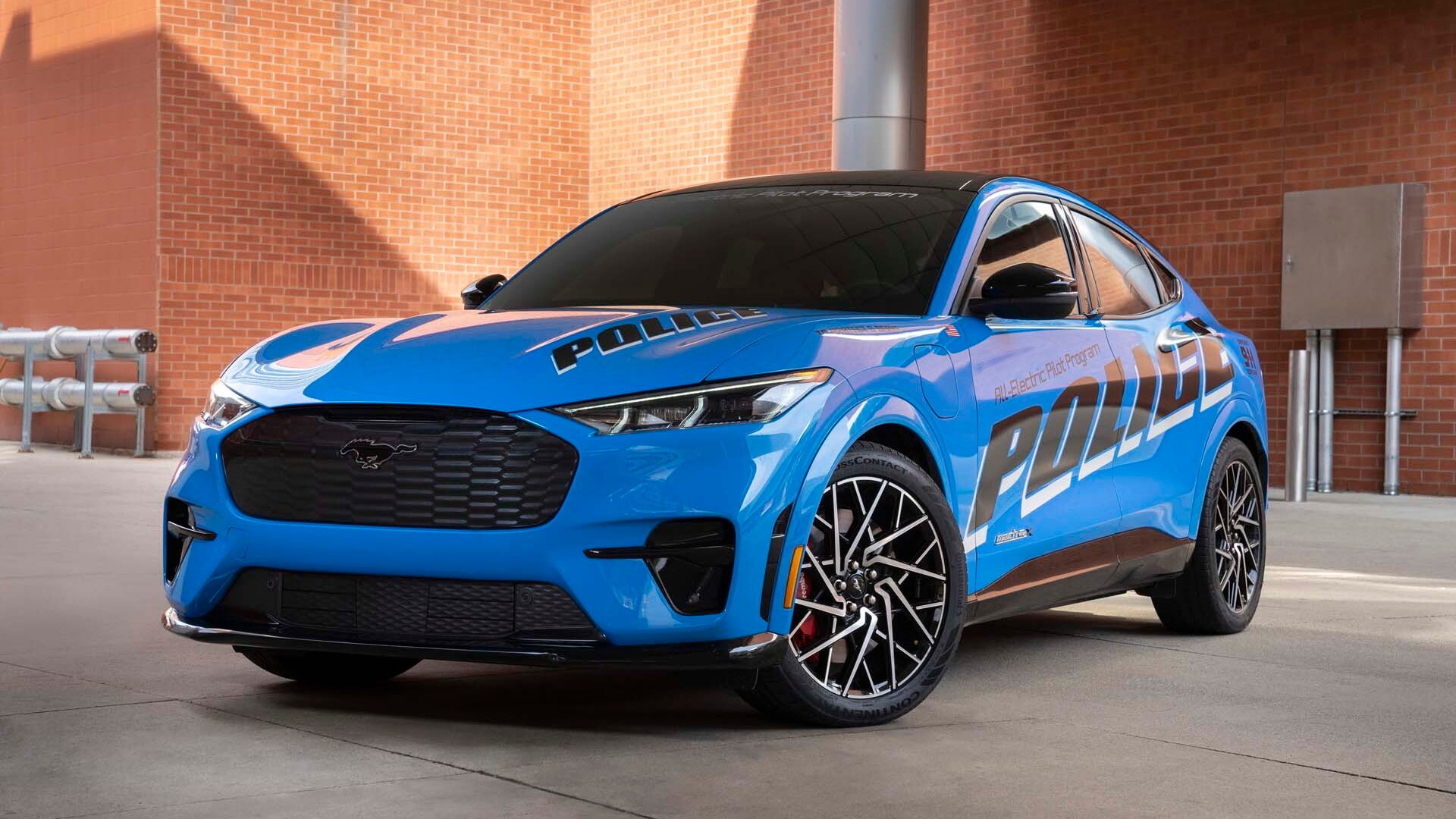 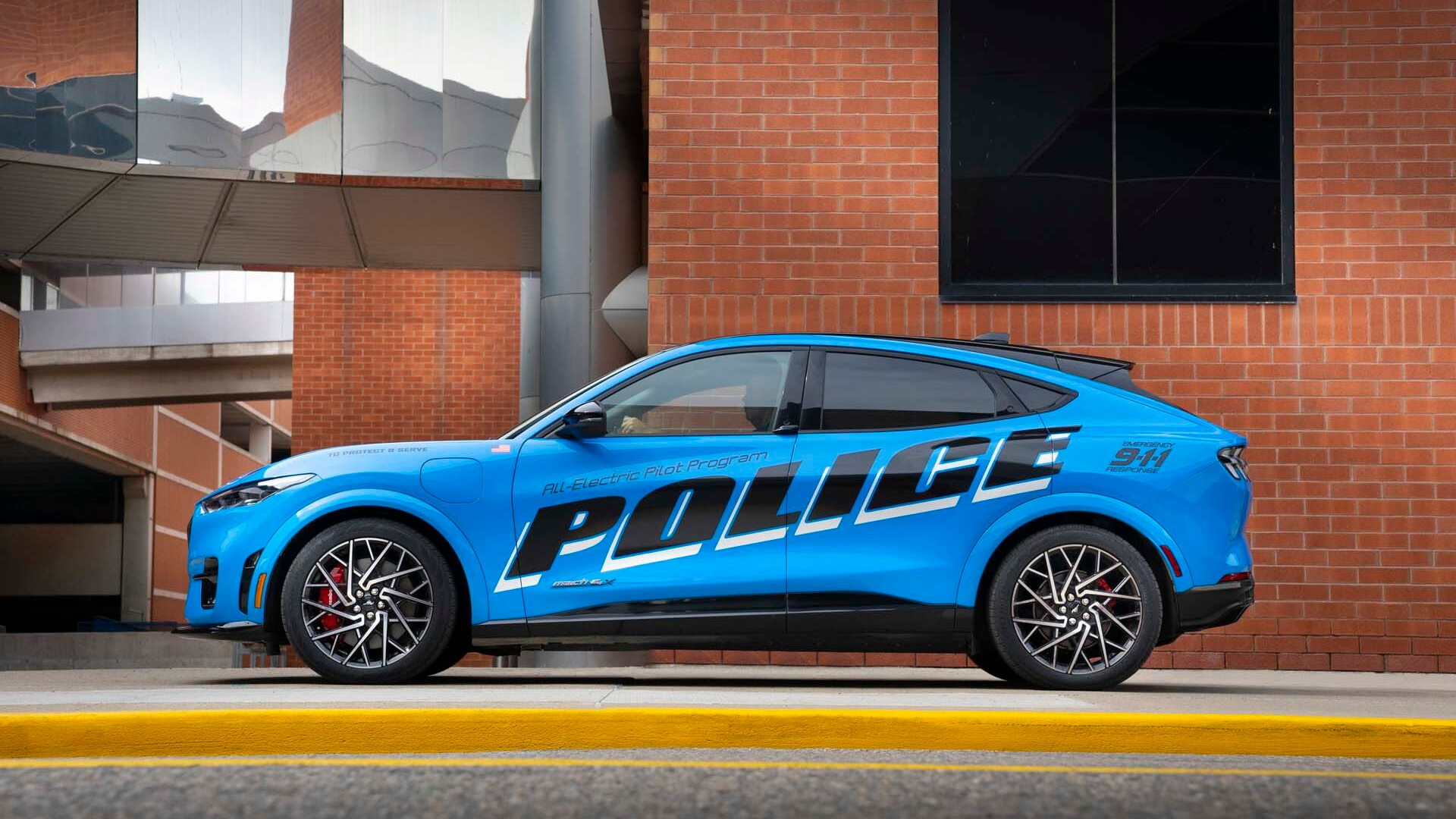 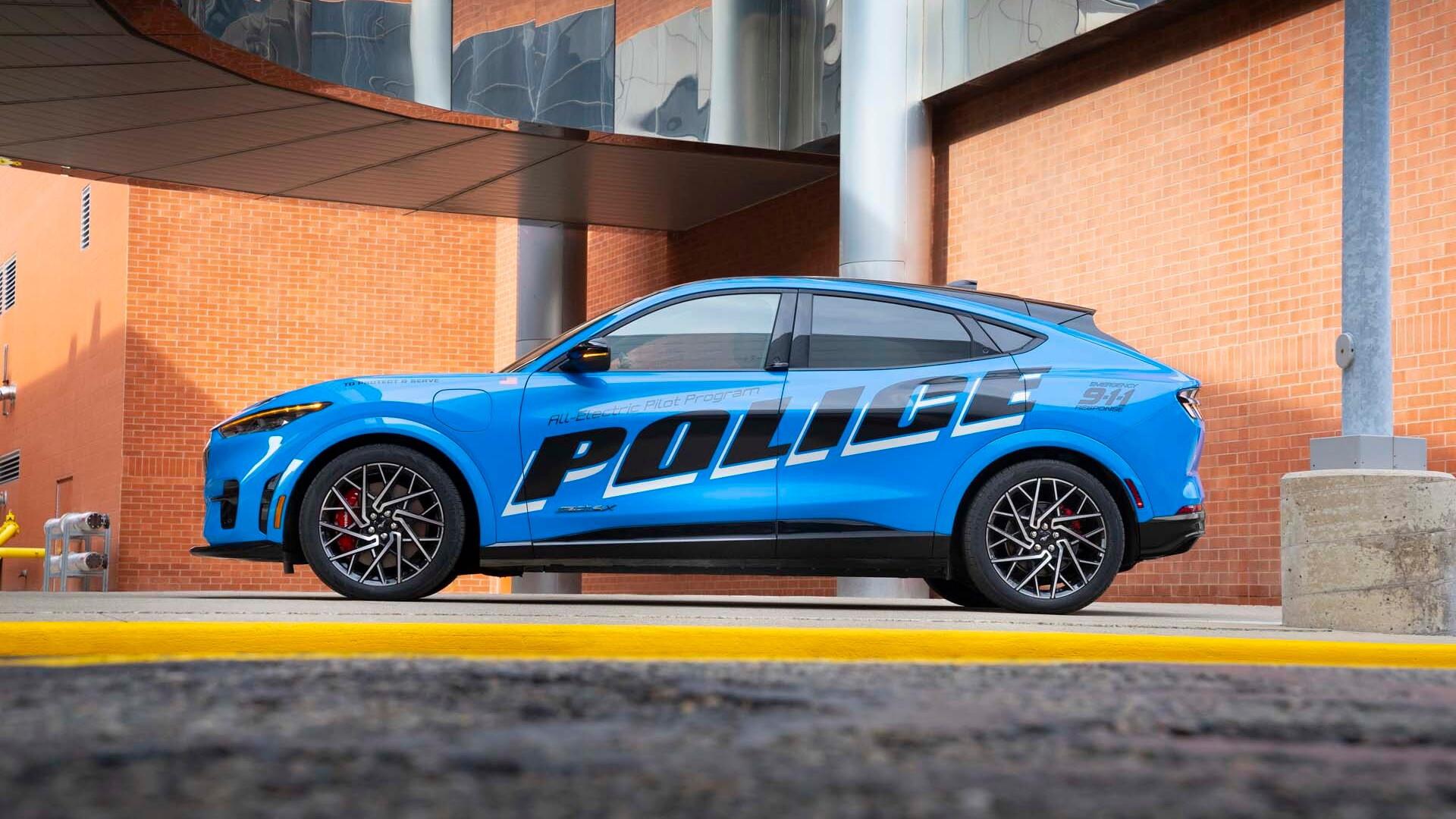 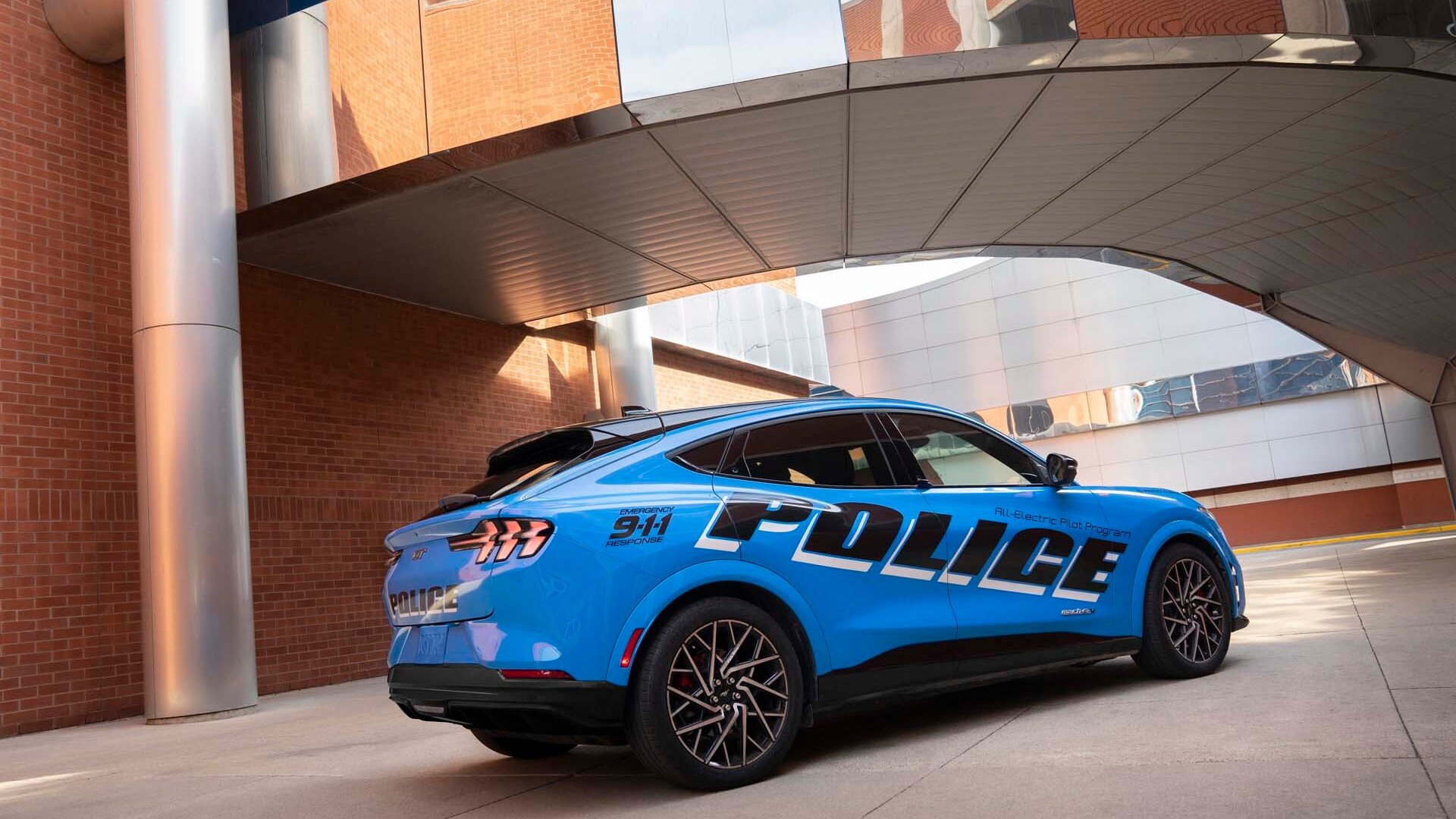 Police cars are a significant chunk of Ford's fleet business, and now the company is taking steps to make them electric.

Ford on Friday said it is "exploring all-electric, purpose-built law enforcement vehicles" as part of its overall $30 billion investment in electrification through 2025. For now, the Ford Mustang Mach-E will serve as a testbed.

Ford unveiled a Mach-E police concept car in the United Kingdom last week, and plans to send a Mach-E to the Michigan State Police 2022 Model Year Police Evaluation, scheduled for September 18 and 20. This testing program is the benchmark for new police vehicles. 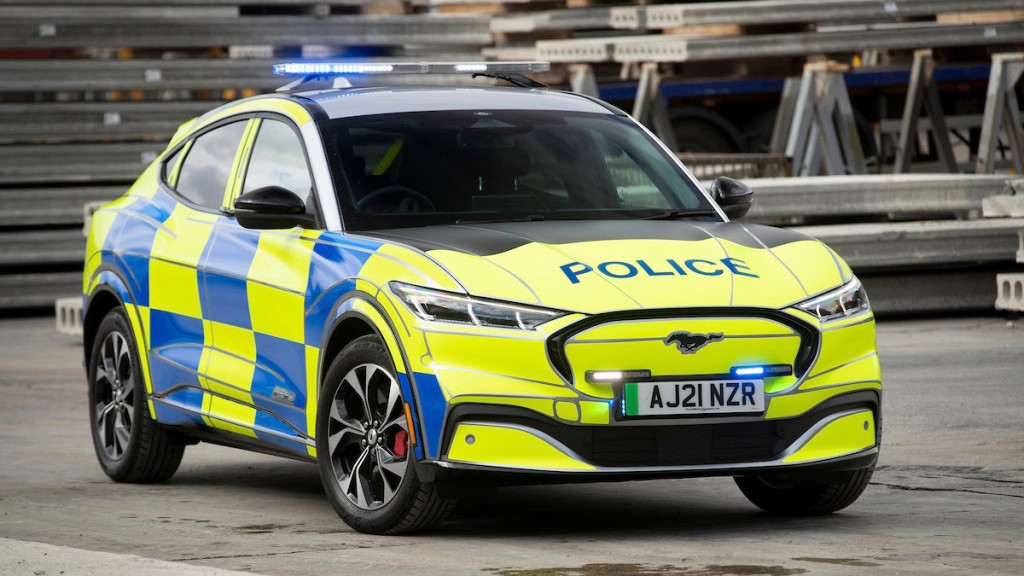 The automaker didn't provide much detail on the Mach-E it's sending to the Michigan State Police for testing, but the UK concept is an all-wheel drive model with the Standard Range battery pack. Ford's UK public relations arm said the automaker is also considering Extended Range rear-wheel drive and all-wheel drive versions.

The concept is decked out in full police livery, complete with flashing lights. Those lights don't affect range, as they're run off the vehicle's 12-volt battery rather than the main battery pack, according to Ford. However, the automaker indicated it may need to look at increasing battery capacity to run other equipment.

GT Performance models on the way could serve as the basis for future pursuit-rated vehicles. Some highway patrols used Mustang GTs for years, so it would be continuing a tradition with a more modern twist. 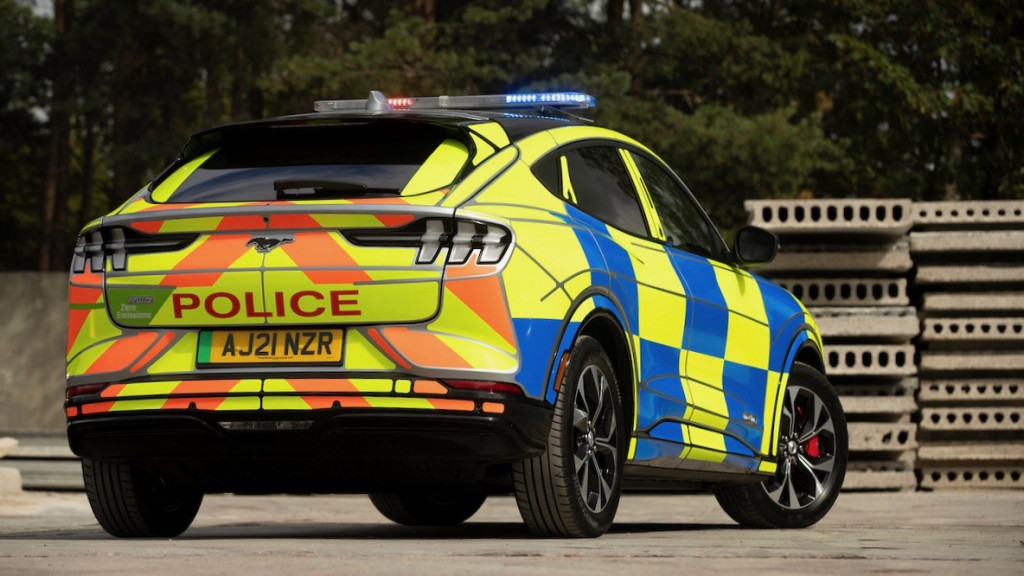 While the Mach-E would be Ford's first all-electric police car, the automaker has been offering hybrid police cars for years, including a pursuit-rated model based on the Fusion Hybrid, which debuted in 2017.

Other EVs have already been turned into police cars. Seattle has used the Nissan Leaf for traffic enforcement, the small Maryland city of Hyattsville took delivery of a Chevrolet Bolt EV police car in 2018, and several European police forces have added Hyundai Kona Electrics to their fleets. 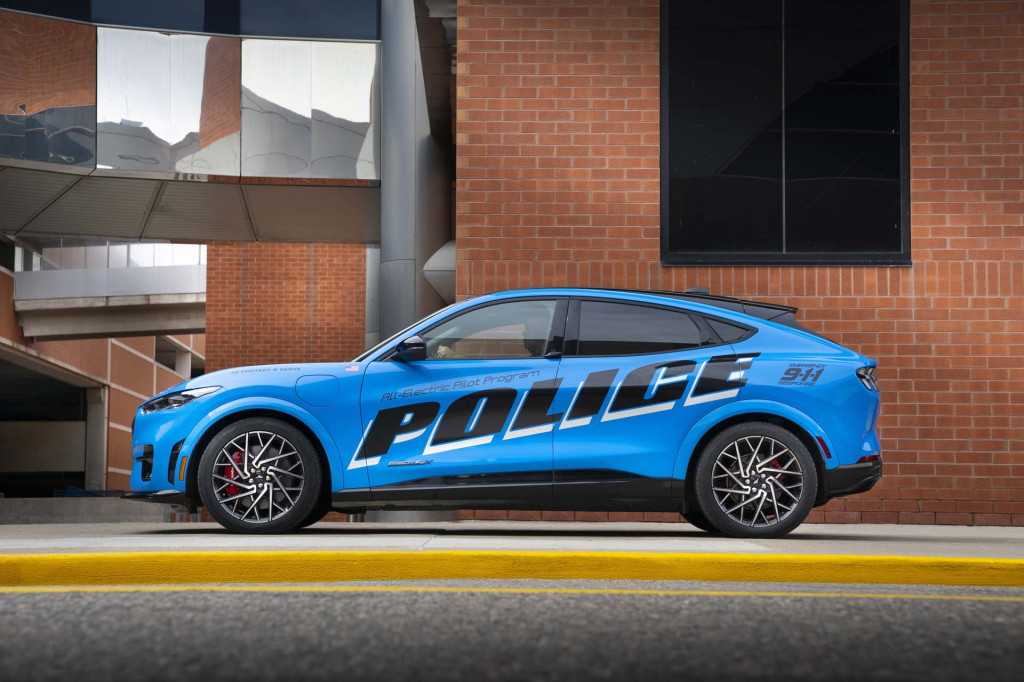 Tesla reportedly considered offering a Model S police car in 2016, and the Los Angeles Police Department (LAPD) tested a Model S that was specially converted for police use. The LAPD ended up acquiring a large fleet of BMW i3s instead, but they've been notoriously underused and have ended up being sold in bulk at the end of their leases.

President Biden has attempted to set a template for agencies throughout the country by emphasizing all-electric and American-made vehicles for federal fleets. That presumably includes police cars, so Ford's move could end up being particularly well-timed.