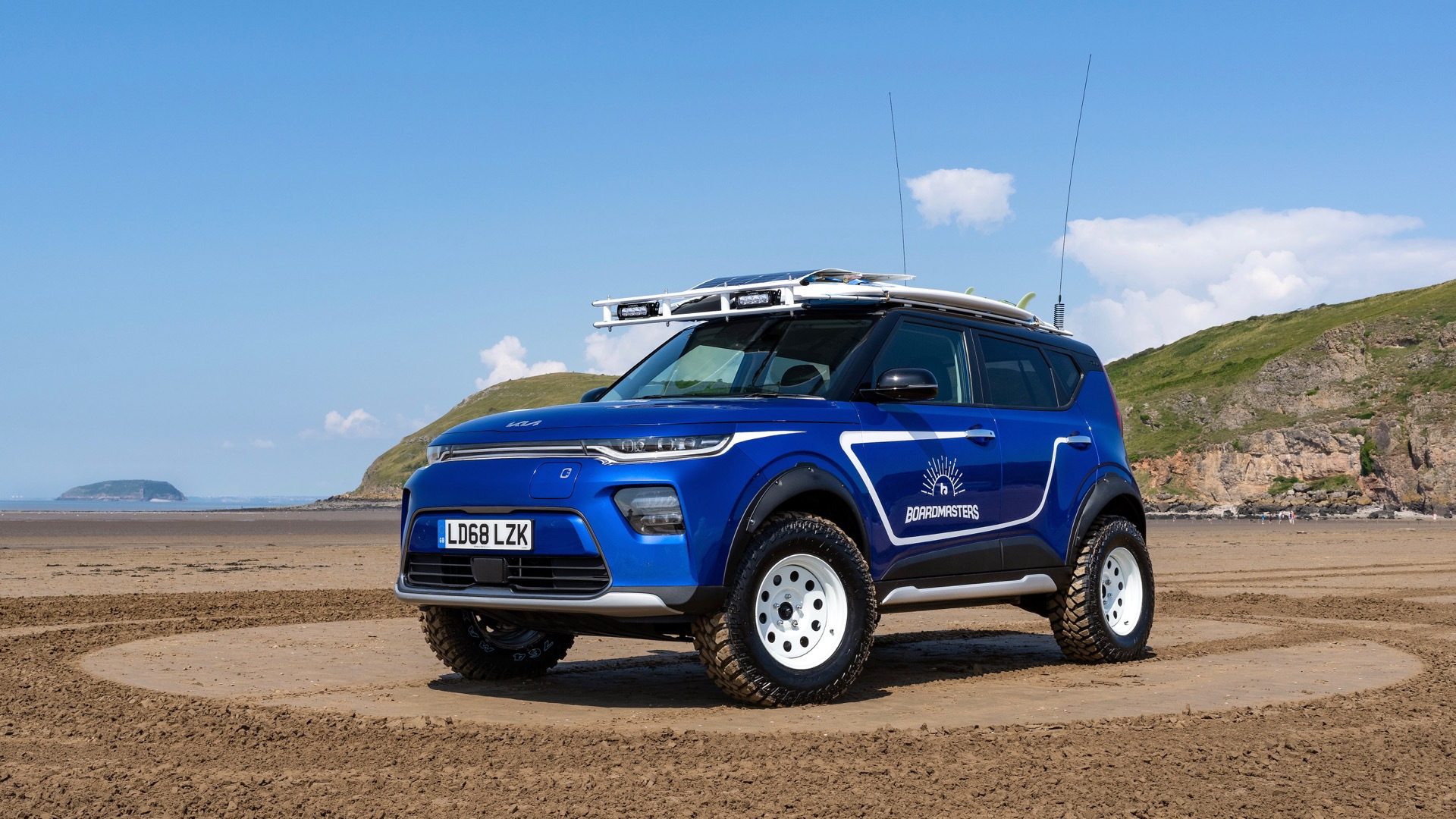 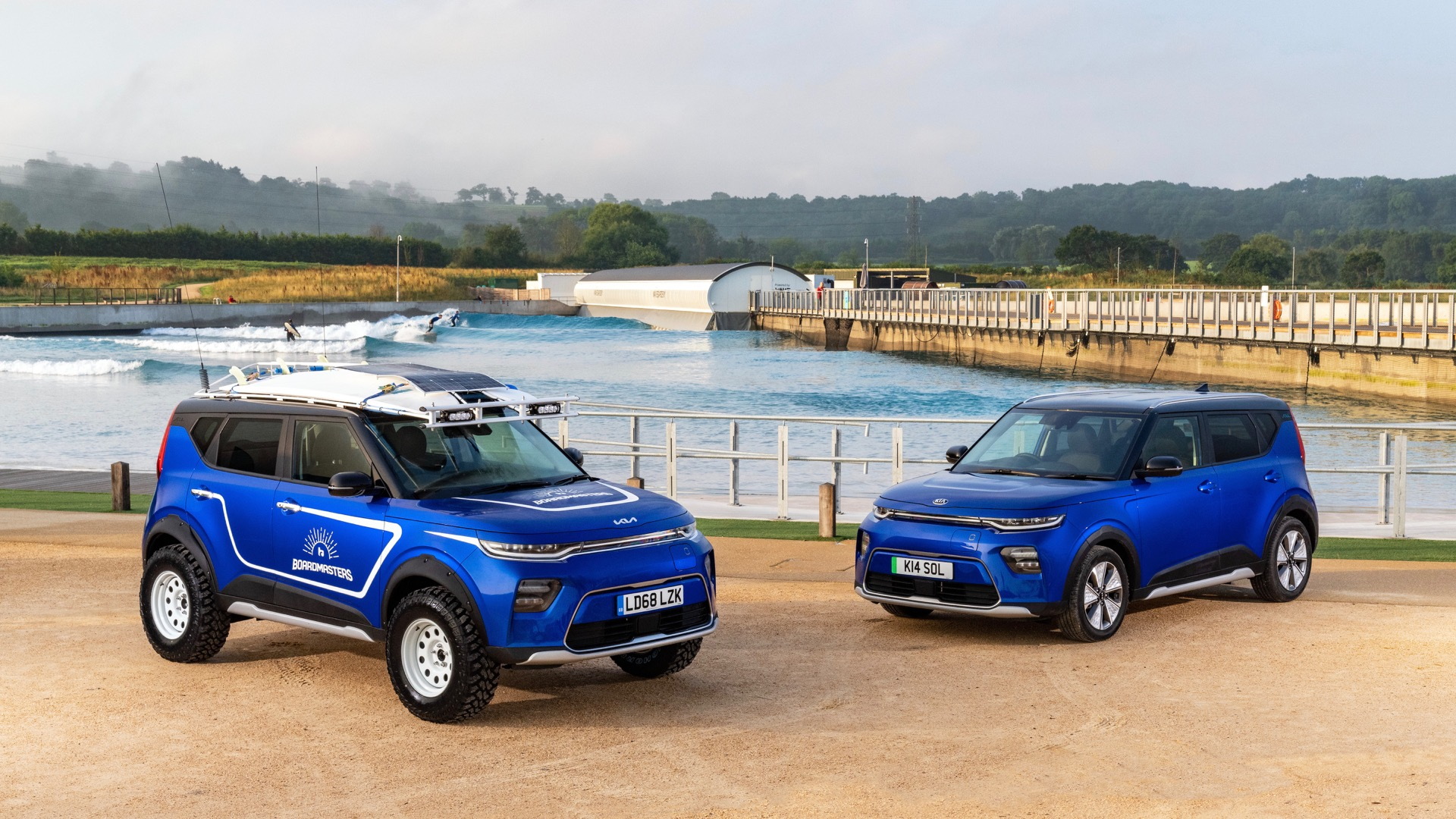 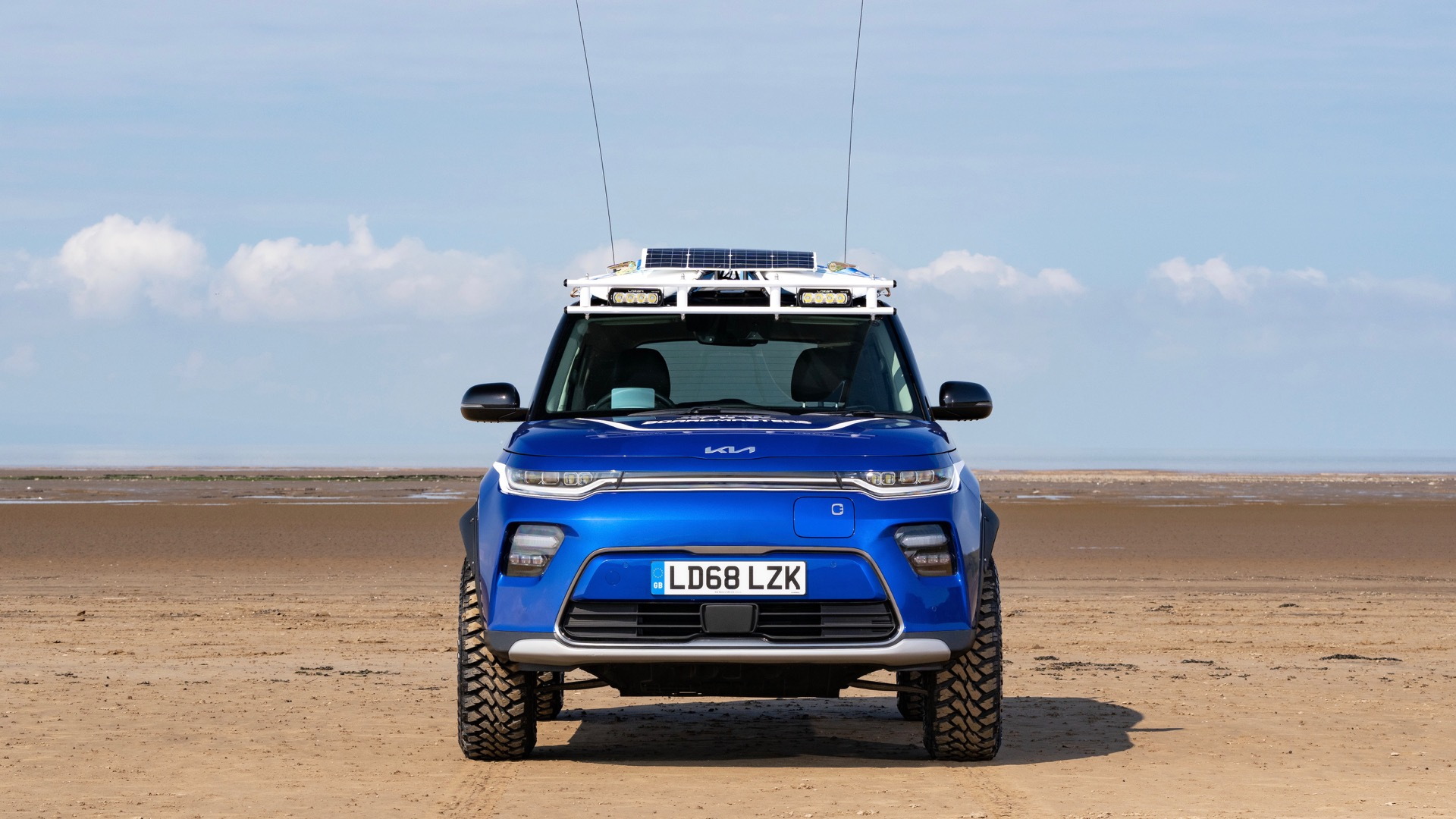 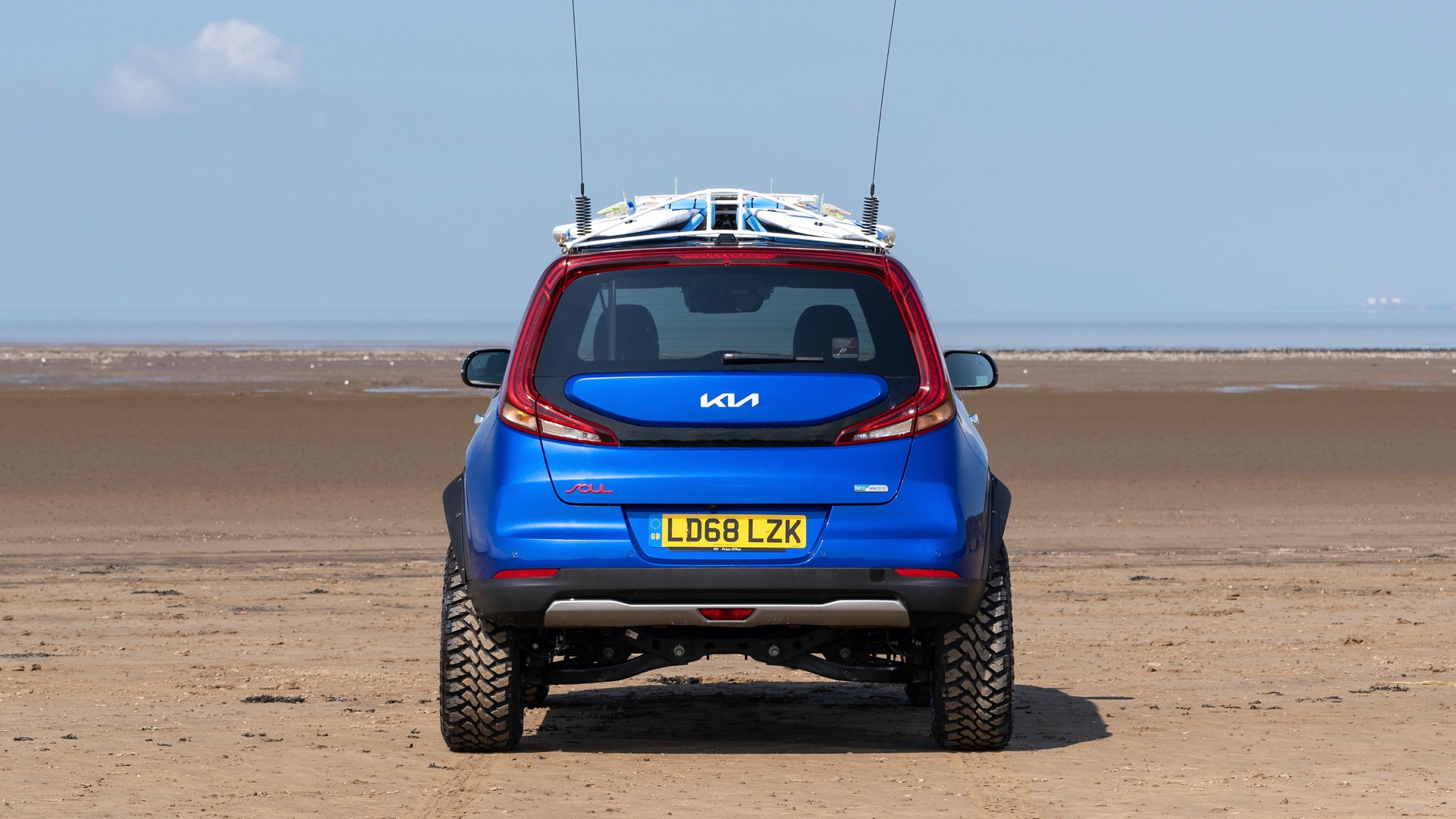 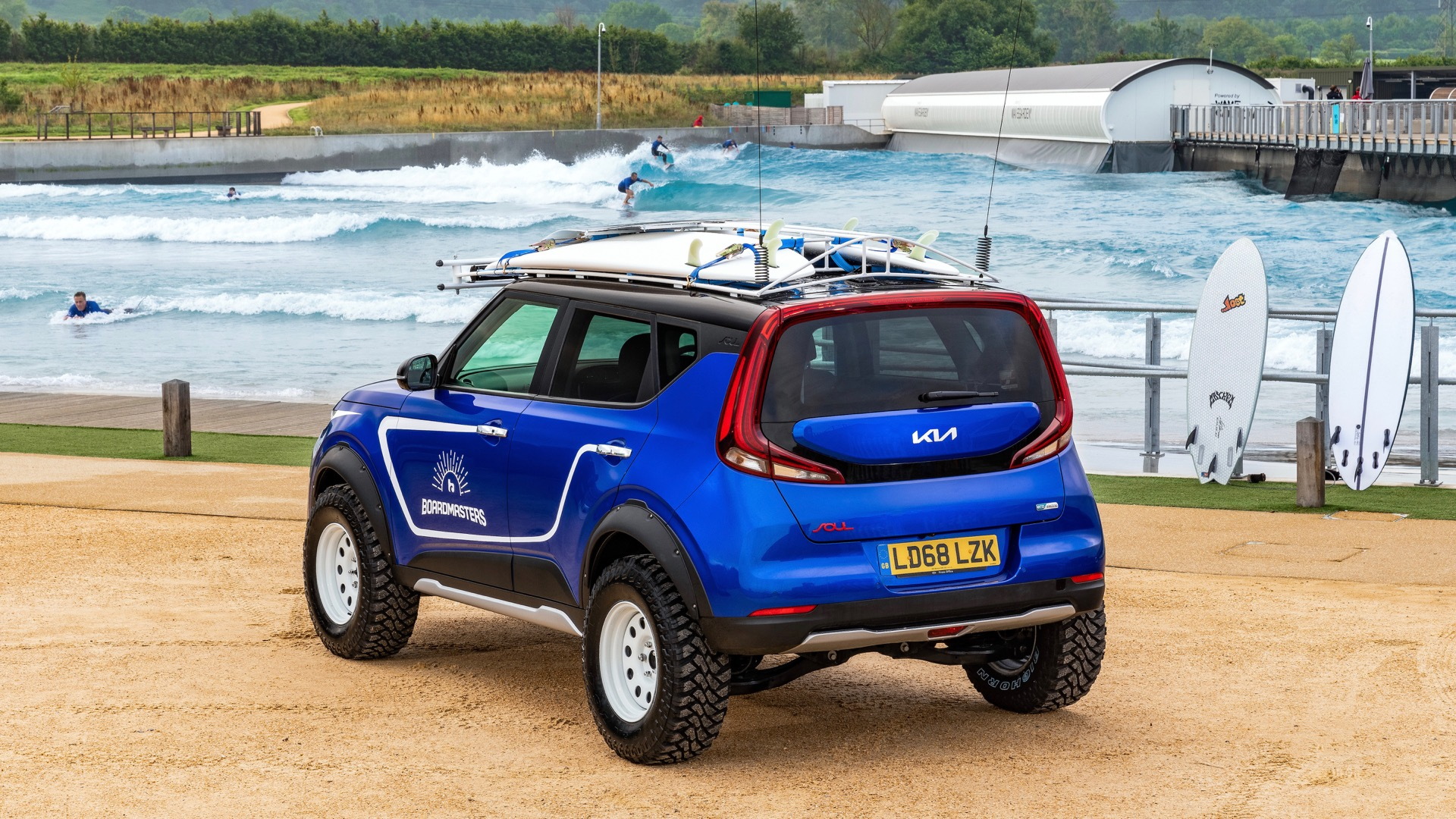 Off-road "safari" builds are all the rage for internal-combustion cars, and now the trend seems to be spreading to EVs as well, with two very different post-apocalyptic EV remixes appearing this week.

The first is the Kia Soul EV Boardmasters Edition, built to promote the Kia-sponsored Boardmasters 2021 surfing and music festival in Cornwall, England. It's a pre-production vehicle that was originally destined for the scrap heap, but was instead repurposed as a surf wagon, according to a Kia press release.

Modifications include a 3-inch suspension lift and wider front and rear tracks, accommodating larger, chunkier, tires. Those changes are likely to affect range, as the Soul EV retained its stock 64-kwh battery pack and 201-horsepower electric motor, Kia noted—and, we assume, the same front-wheel drive. The donor car is a second-generation Soul EV, which was originally slated for the United States, but Kia ultimately decided not to sell it here.

The Soul EV's rear seats were also removed to create more cargo space, while the cargo area was covered in a wooden deck, made from sustainably-harvested spruce. Naturally, the surf-themed Soul EV also gets a roof rack capable of holding a couple of surfboards.

Typical of modified vehicles commissioned as automaker public-relations exercises, the Soul EV Boardmasters Edition still retains much of the look of its stock counterpart. That's not the case with the off-road Tesla Model 3 from YouTube channel "Rich Rebuilds."

Rich Benoit has used the Tesla-centric channel as the springboard for a variety of car projects, and also helped out with the 2019 "Truckla" Model 3 pickup. This time, he jacked up a Model 3 and replaced the smooth front fascia with a macho-looking brush bar.

While many automakers have embraced aftermarket modifications, Tesla has bristled at merely letting independent shops do routine repairs and maintenance. Right-to-repair rules in the U.S. proposed by the Biden Administration could potentially help not just Tesla repair, but also projects like this off-roader.

And it helps underscore that despite a reputation for minor finish issues, the Model 3—and modern EVs in general—are very tough.