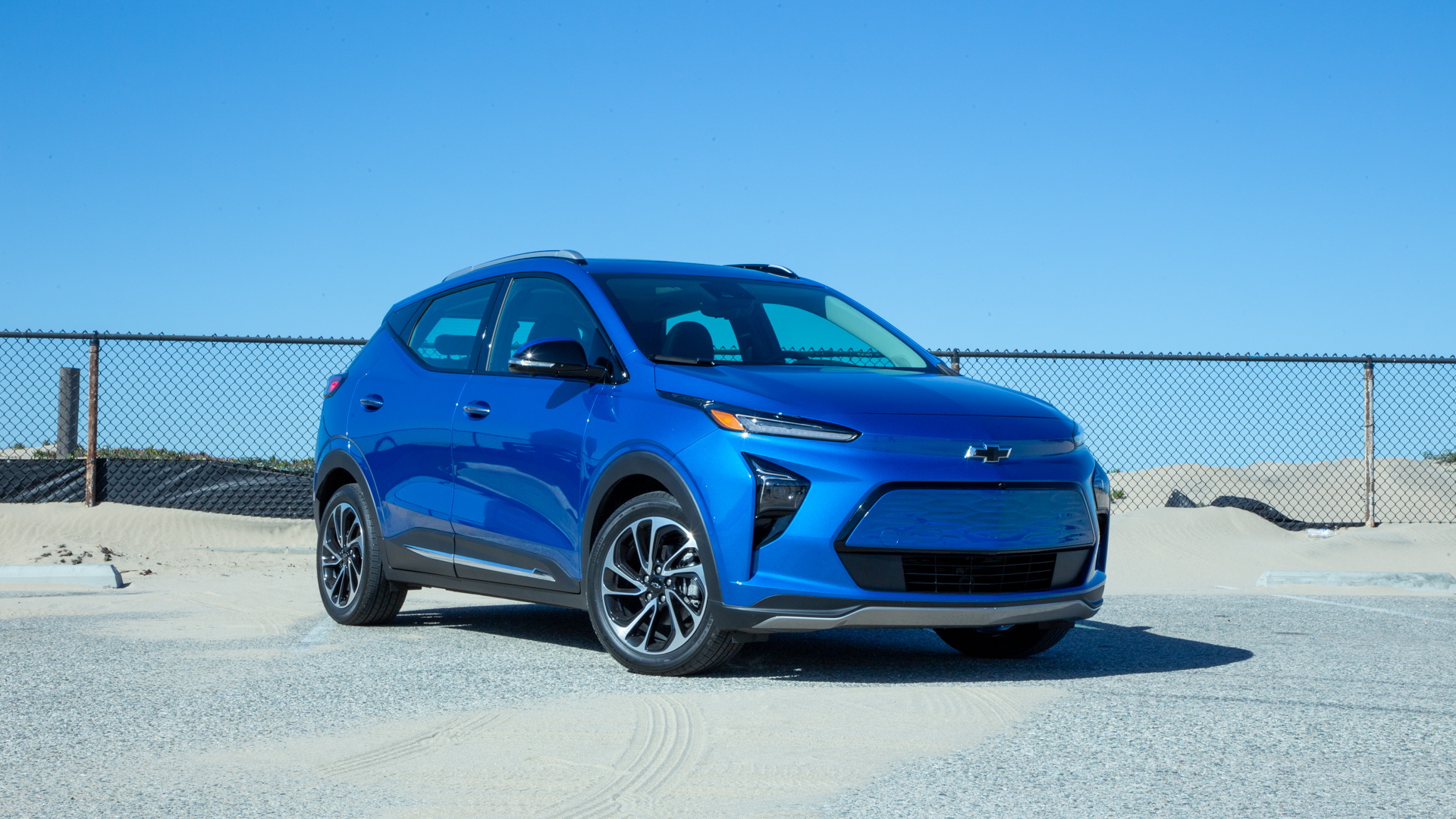 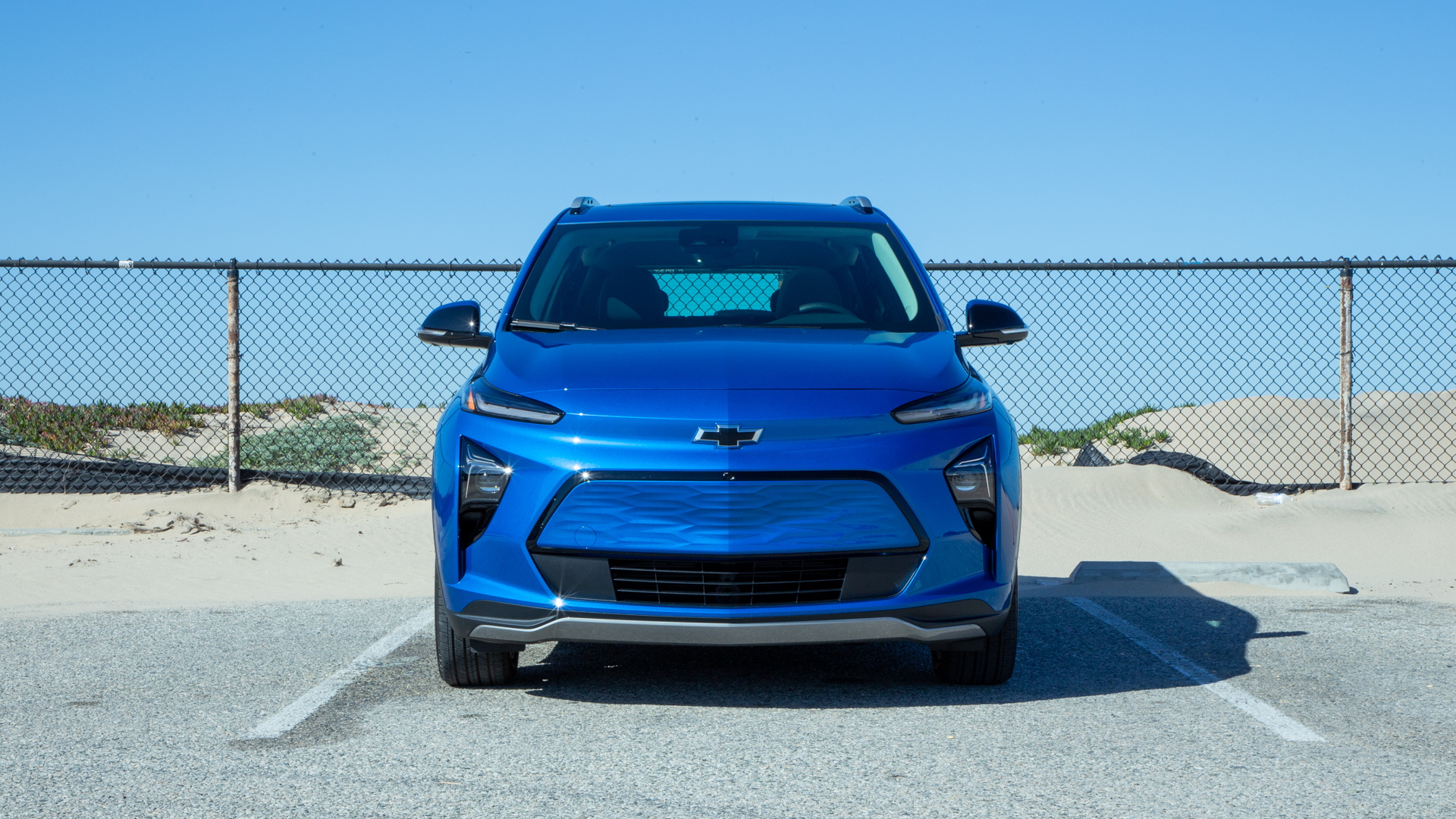 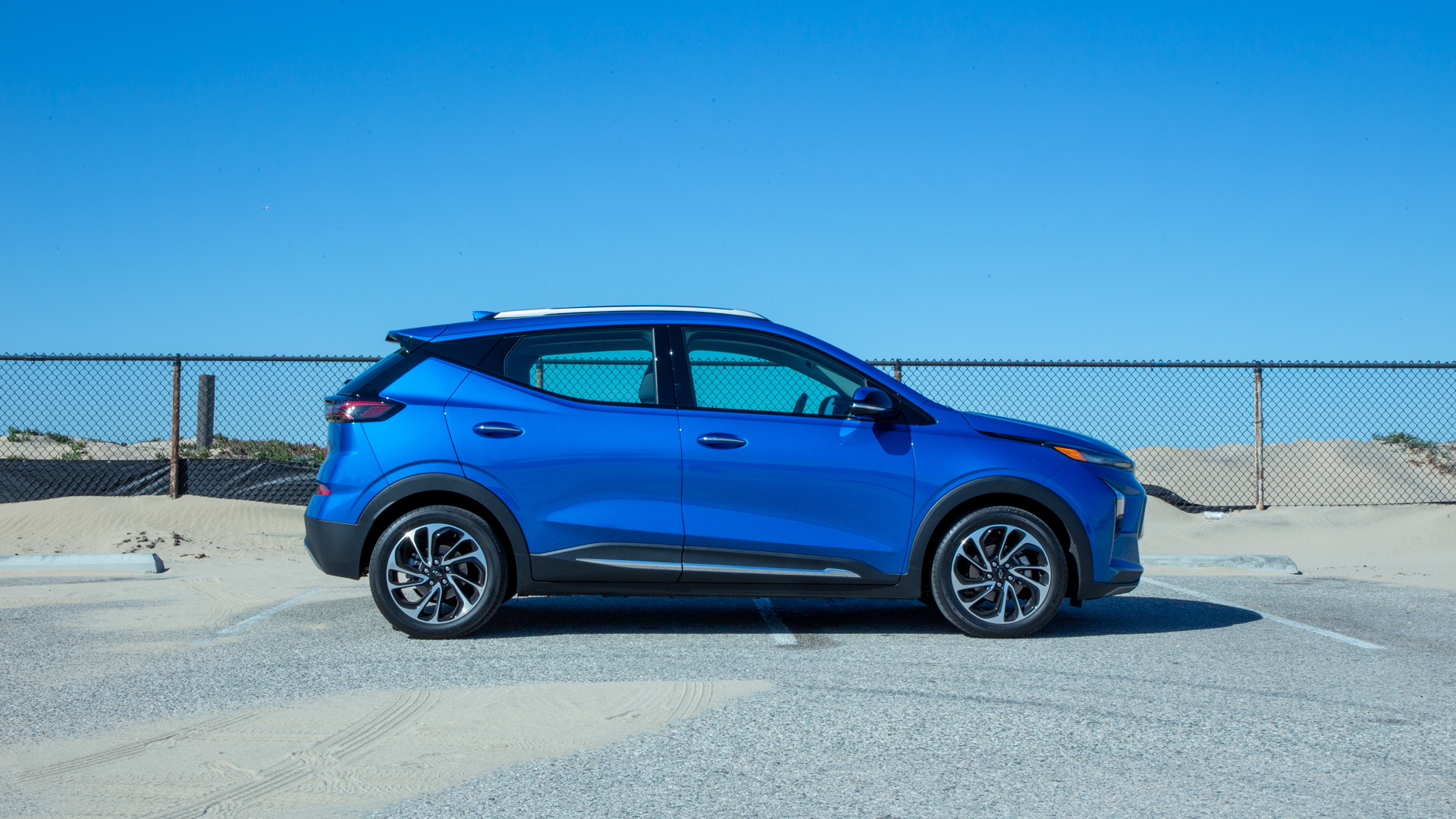 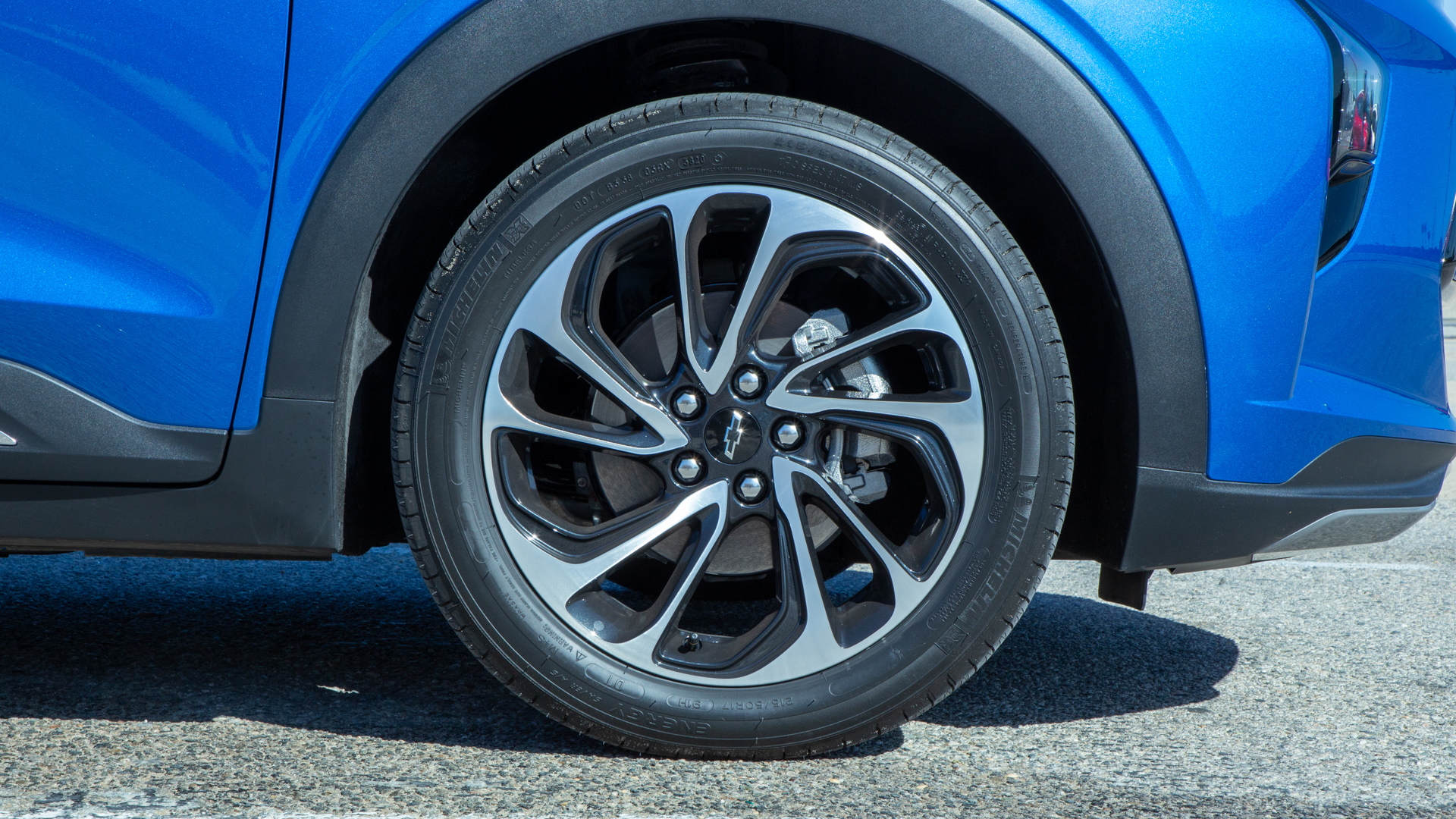 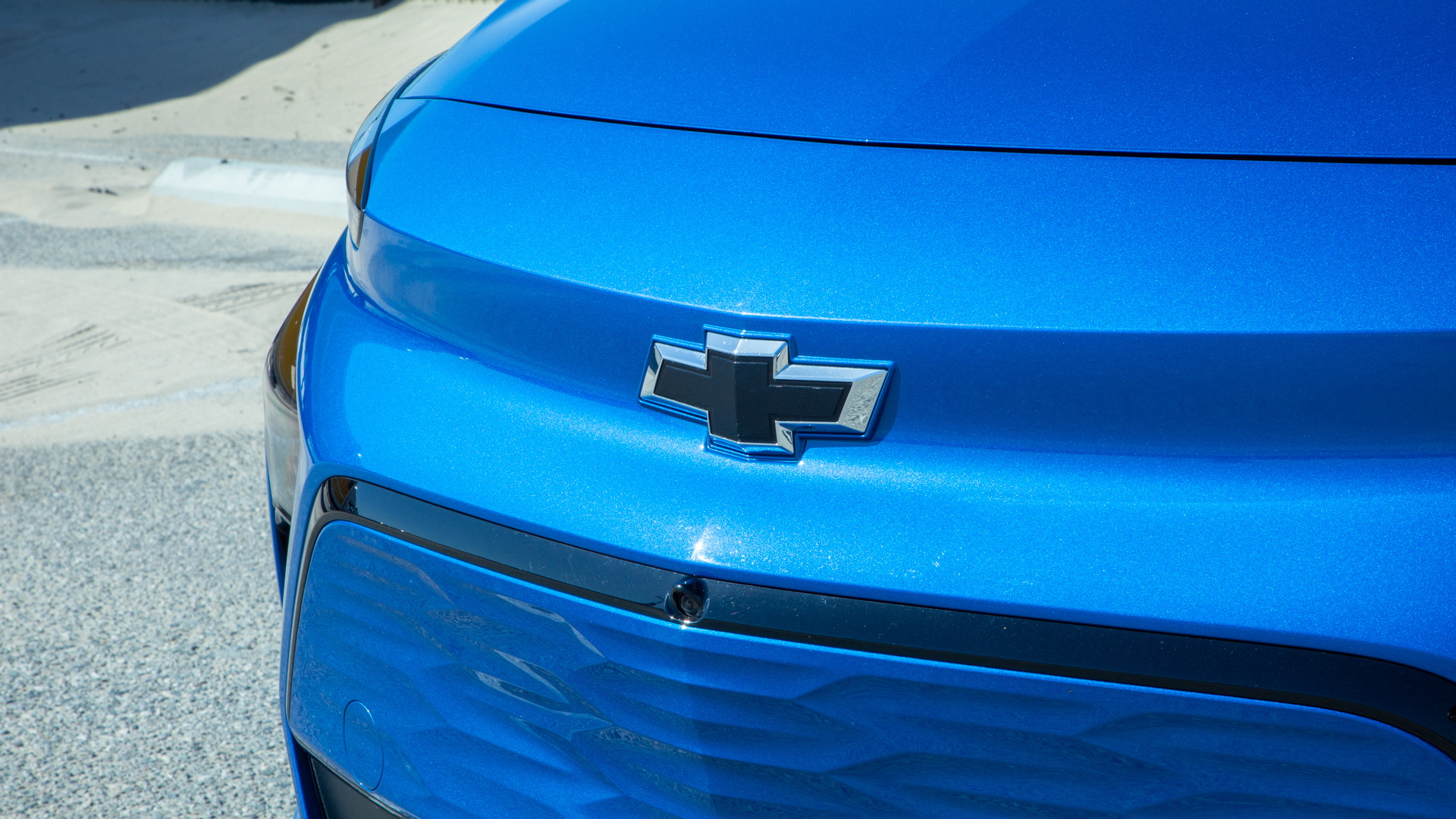 It occurs to me as I’m cruising down the highway, hands folded in my lap and eyes trained on the road ahead, that what I’m sitting in may have unwittingly committed a bit of fratricide. The all-new 2022 Chevrolet Bolt EUV makes an intriguing case for itself against not only competition from other automakers, but the smaller Bolt EV as well.

Giving the Bolt EUV a name that implies it’s an SUV of some kind is a bit misleading. It won’t offer all-wheel drive, a big change in ground clearance, or additional dynamic capability. It’s best to think of the Bolt EUV as a slightly bigger version of its counterpart.

Though the two still share very similar styling cues, the Bolt EUV doesn’t share any exterior panels with the Bolt EV. The wheelbase is stretched out by 2.9 inches over the Bolt EV and it is 6.3 inches longer overall with longer overhangs front and rear. The cabin stretch has gone to expanding rear legroom, which has grown from 36.0 to 39.1 inches. It gives the Bolt EUV a rather large backseat for a vehicle of this size.

At 169.5 inches long, the EUV is slightly shorter than most of the subcompact SUVs on the market—all-electric or not—but it’s got a better backseat than nearly all of them. The rear bench could use a bit more thigh support and some additional air vents back there would be nice if I were nitpicking, but the bottom line is it is plenty comfortable for two adults for a long trip.

Counterintuitively, the Bolt EUV has less cargo volume than the Bolt EV, with 16.3 cubic feet behind the rear seat and 56.9 cubic feet with it folded (those figures are 16.6/57.0 respectively for the EV). Chevrolet insists however that this is a problem with the SAE methodology and that the EUV actually has more space. It will be hard to check the veracity of this claim until we can try to fit some big bags in both, but what I did like about the cargo area was an under-floor bin that isn’t counted in the cargo measurements. You can actually remove that span of floor, opening up another 8-9 inches of space to fit taller items.

Though the Bolt EUV is all-new, its powertrain is not. It uses the same setup found in the 2021 Bolt EV: a single electric motor producing 200 hp and 266 lb-ft of torque draws power from a 65 kWh lithium-ion battery with 288 cells. As stated above, the motor is connected only to the front wheels.

Chevrolet estimates the range for the Bolt EV to be 259 miles, with the Bolt EUV following closely behind at 250 miles (both figures are still awaiting final certification from the EPA). These estimates are rather close, considering that the EUV is more elevated and heavier by about 80 pounds. Representatives we spoke to indicated that the EUV’s added length helps keep the coefficient of drag between the two about the same, but the end result is a good piece of news for the EUV: the additional passenger room won’t really cost you much range.

My drive in the Bolt EUV covered 58.4 miles with an average energy usage of 3.7 mi/kWh. The trip computer’s estimated range in that time fell from 236 miles to 182 miles (a difference of 54 miles). Displayed in the instrument cluster are also a pair of helpful figures, one for max range if you really try to squeeze the miles and another for minimum range if you’re going to blast the A/C and zip around everywhere. Most of those miles were highway miles; my average speed over that journey was 34.2 mph, so regen was minimal.

Both the Bolt EUV and Bolt EV include DC fast-charging as a standard feature, but just as in previous versions of the Bolt the peak power is 55 kW. The EUV gains up to 95 miles in 30 minutes. It also comes with a dual charging cord that works for both Level 1 and Level 2 charging.

Chevrolet will cover standard installation of a Level 2 charger with the purchase or lease of a Bolt. For those who, like me, don’t have access to home charging in an apartment, Chevrolet will provide charging-station credit in some form—though how much you would get has not yet been finalized. Details for these programs will be released closer to the on-sale date for the Bolt EUV in early summer.

The newly introduced one-pedal driving experience (turned on by a small button near the shifter) in the Bolt EUV is a highlight. It feels linear and easy to control right out of the gate. The amount of braking skews toward the lighter side, but if you need more stopping power there’s a small paddle shifter behind the left side of the steering you can grab to slowly tick up the regenerative braking as you come to a stop.

The Bolt EUV also features Super Cruise, GM’s hands-free highway driving system as an available option. This will be the first non-Cadillac vehicle to offer this feature, and it worked as advertised. Unlike some other systems, Super Cruise won’t change lanes for you and it has you take over when there are merges coming up, but otherwise it worked rather flawlessly on some semi-crowded Los Angeles freeways. It does a good job centering the vehicle in the lane, making small corrections somewhat consistently.

Chevrolet has thankfully put new front seats into both vehicles as well, after hearing customer feedback that they were lacking in support. The new chairs are more padded and the bottom cushion feels elongated, and less like a barstool. I would say the new seats are just about average in comfort, which is a marked improvement. In-cabin technology has also taken a giant leap forward, with a standard 10.2-inch touchscreen and wireless Android Auto and Apple CarPlay on tap. The screen is slightly tilted back towards the top of the dash, which makes reaching the top of it a bit of a reach.

We were able to confirm that Super Cruise will only be offered on the Bolt EUV, with the Bolt EV missing out. This isn’t the only feature that will be exclusive to the larger vehicle, the same thing can be said about ventilated front seats and a panoramic sunroof.

Even after such a short time with it, the Bolt EUV is my favorite small GM vehicle that I’ve ever tested—though it doesn’t have great competition if we’re being honest about it. Though it’s not luxury-grade quiet, the interior is rather serene and the powertrain offers plenty of zip for day-to-day driving. I was also impressed by the new technology offerings and the improved cabin materials and front seats. With the Bolt EV getting a big price cut, which in turn brings down the price of a Bolt EUV as well, it’s a solid option up against the Nissan Leaf Plus. And if those federal tax credits do return, the low price gets augmented even further.

The case for the Bolt EV is price. It does start at $31,995—$2,000 less than the Bolt EUV. If you’re looking to get the best deal, or don’t need the interior room or Super Cruise, then it remains a good option. But for anyone with children or frequent passengers, or those who would like to have Super Cruise to burn through highway miles with ease, the Bolt EUV is the way to go. Chevrolet will be closely watching consumer demand to see how much of each it will produce; as we previously reported production can be shifted up to 75% in either direction. I would not be surprised to see that lean heavily in the EUV’s direction.