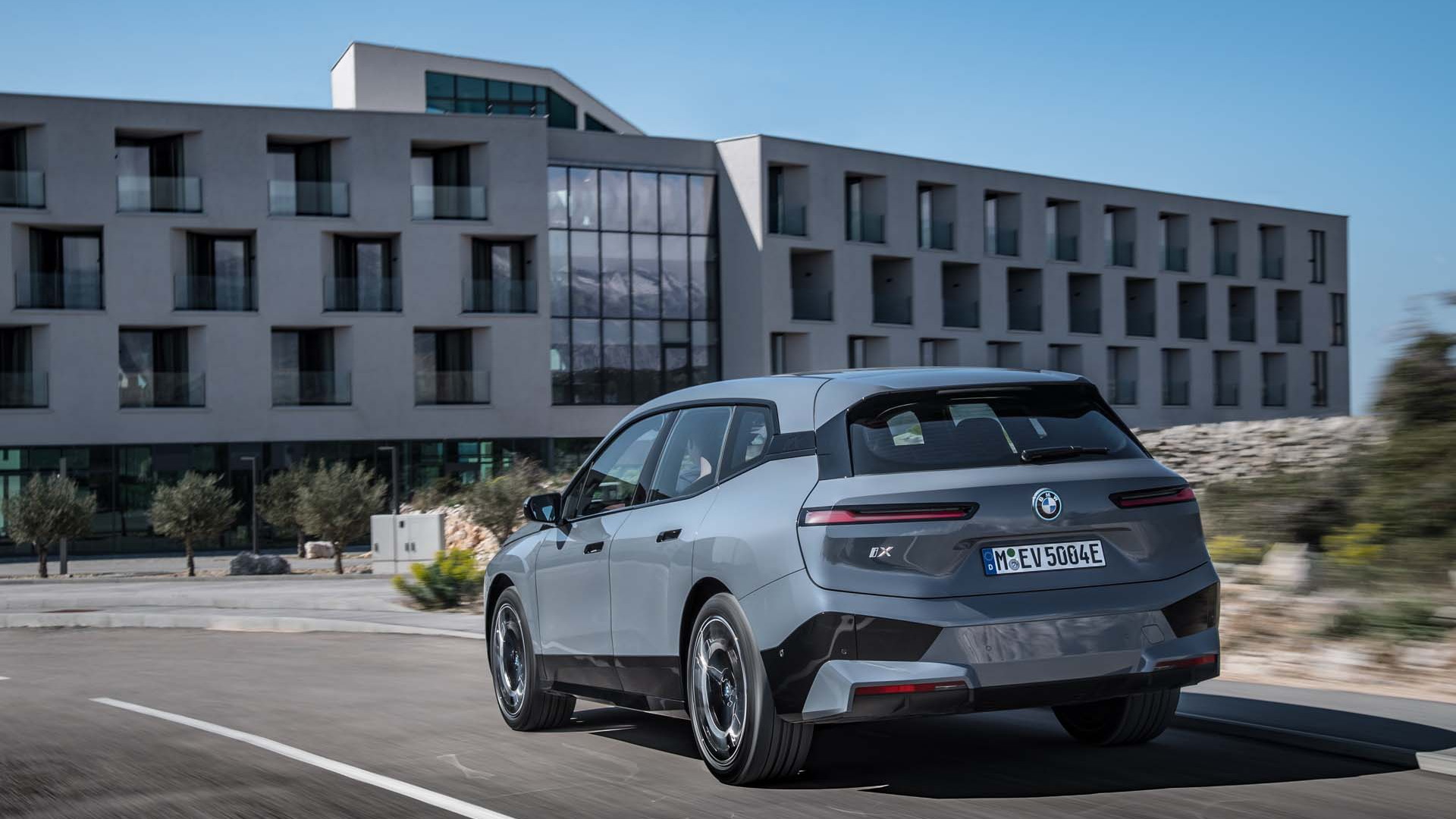 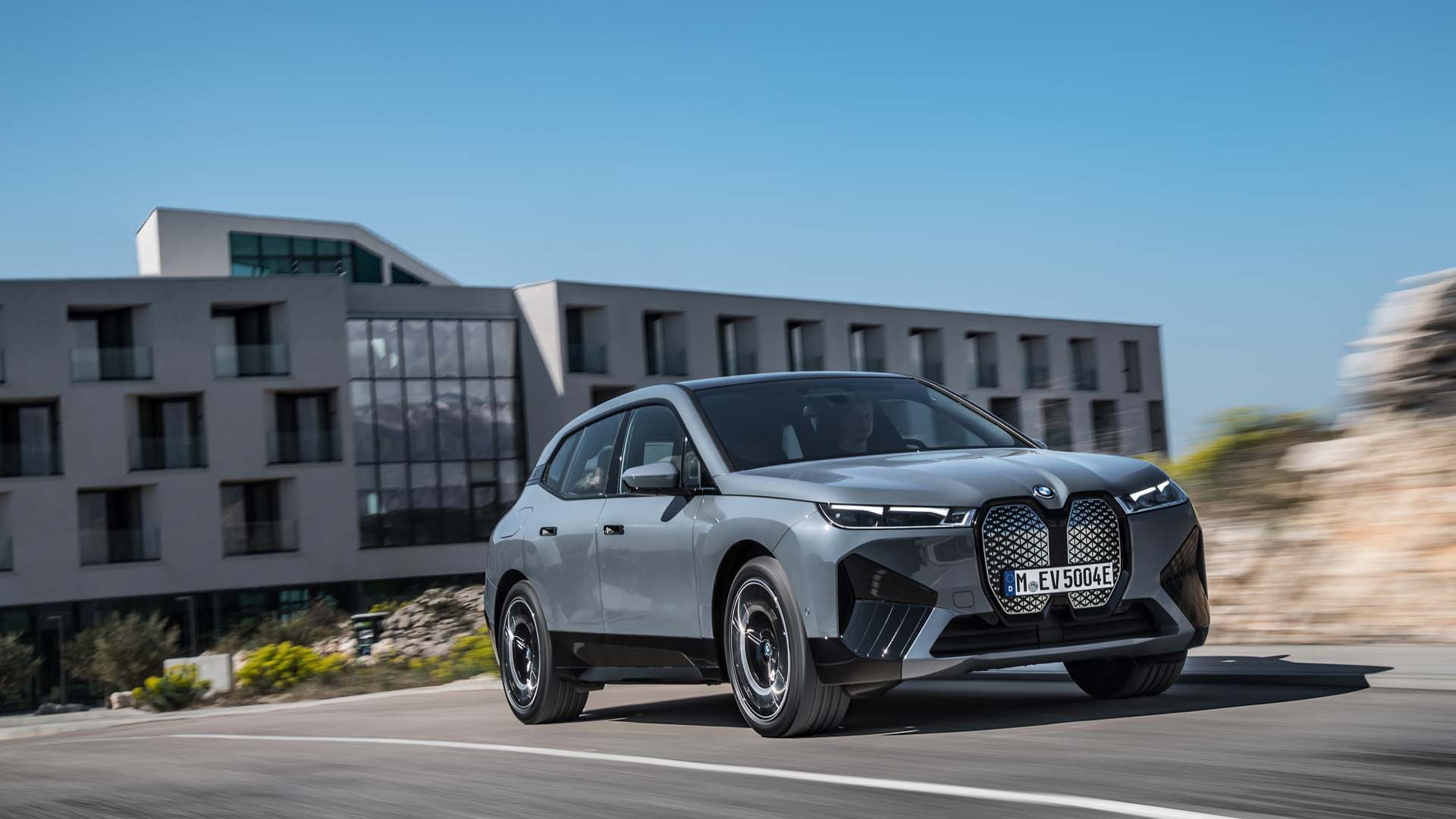 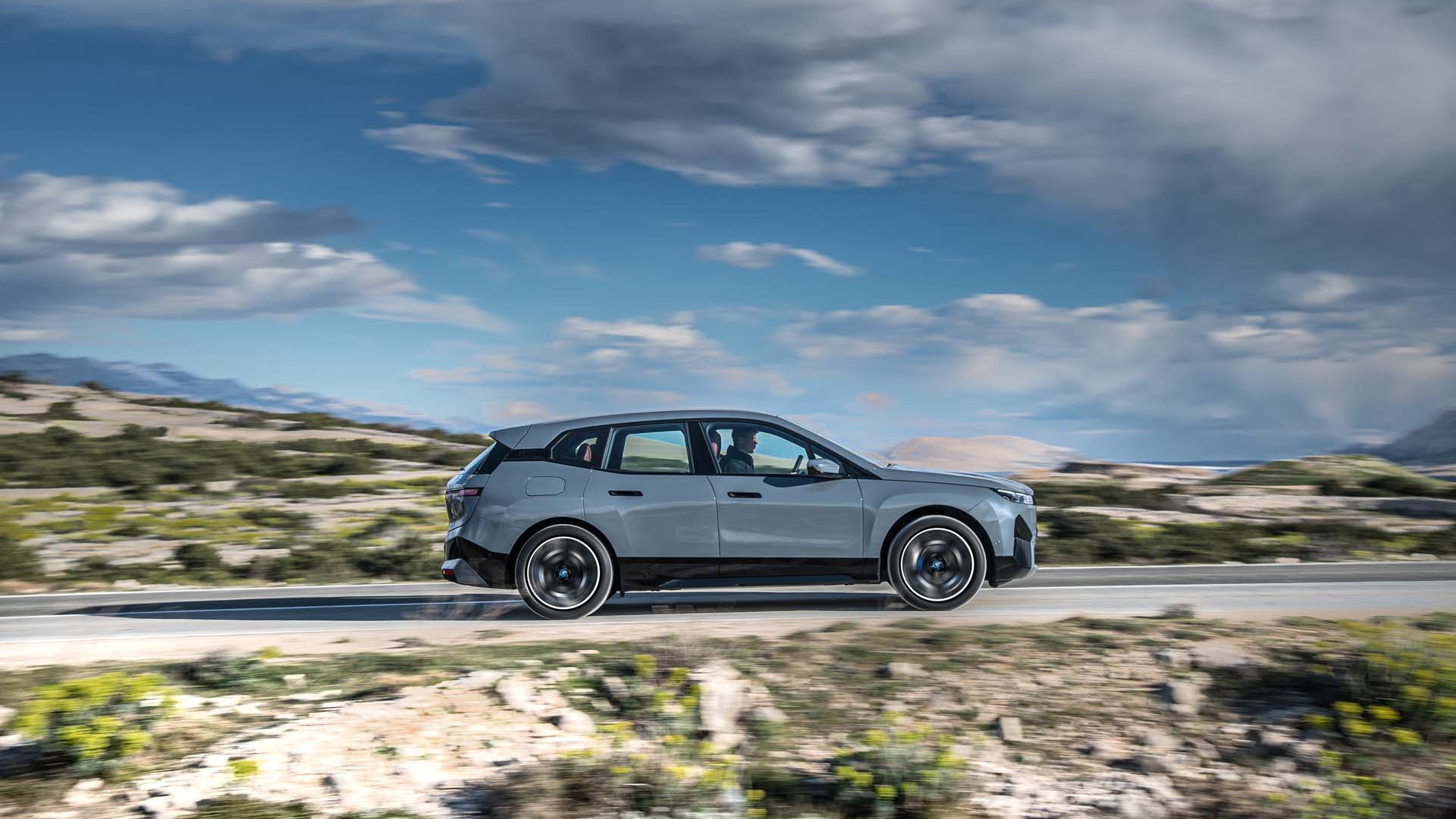 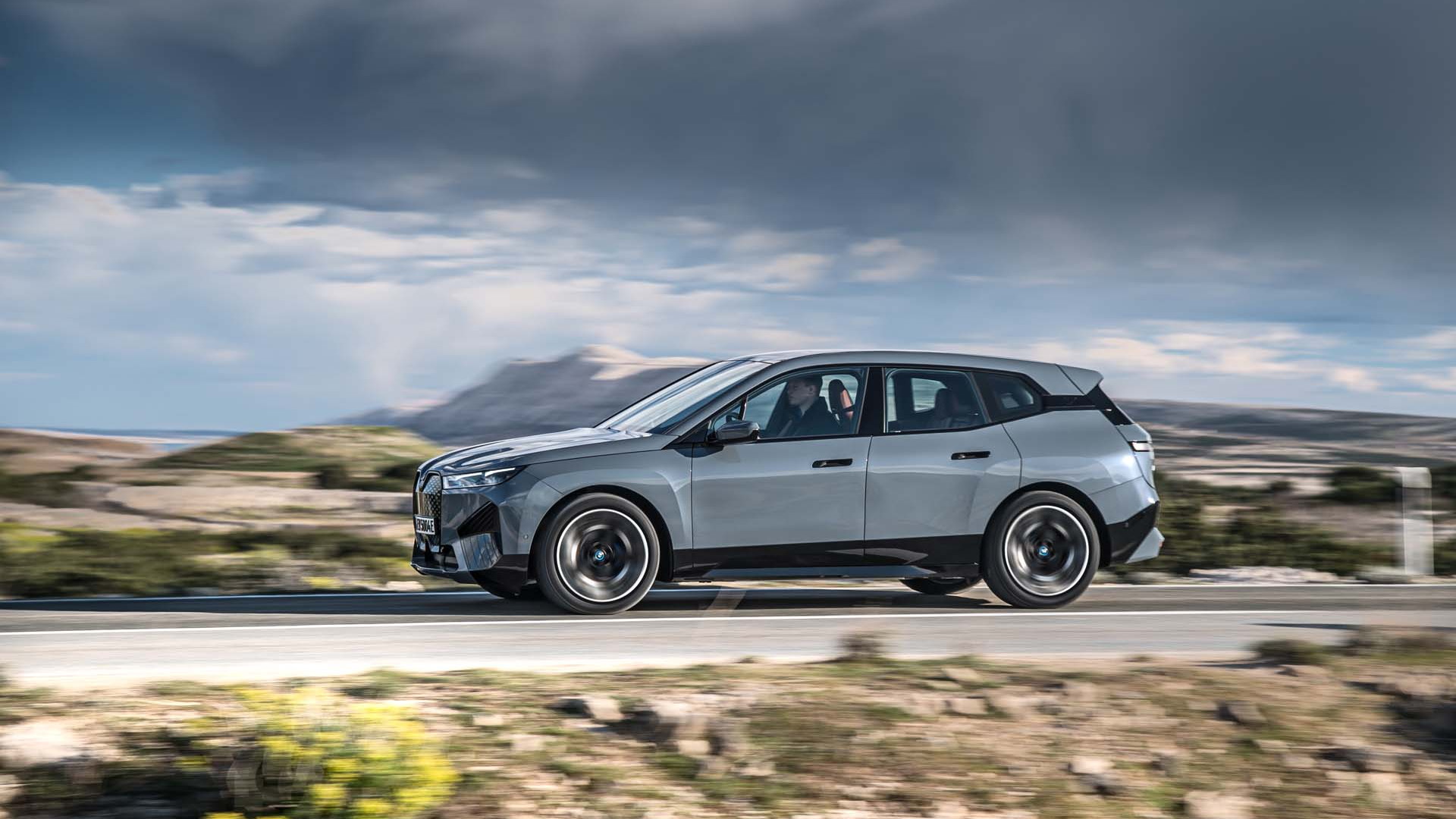 BMW has updated its U.S.-market information regarding the 2022 iX electric luxury SUV, ahead of the model's anticipated market launch in the first quarter of 2022.

That’s for the iX xDrive50, which makes its debut with a dual-motor system making 516 horsepower. This version of the iX will have 200-kw DC fast-charging, a single-piece panoramic glass roof, and a new curved display with BMW’s latest iDrive 8 interface.

BMW has already said that the xDrive50 will be able to accelerate to 60 mph in 4.4 seconds and reach 124 mph. BMW says that a more powerful iX M60 model—developed by the automaker’s affiliate “skunkworks,” BMW M GmbH, will arrive in the future with more than 600 hp.

In both range and entry price, the iX will end up between the Tesla Model X and Audi E-Tron. The iX is 195.0 inches long, 77.4 inches wide, and 66.7 inches tall, with a cavernous cargo space of 35.5 cubic feet with the rear seat up or 77.9 with both seatbacks flipped forward. It weighs 5,659 pounds, which believe it or not is at the light end of its class. The big SUV is built on an aluminum spaceframe body, with a mixed-materials approach for the body shell, including carbon fiber reinforced plastic (borrowing some of the expertise gained in creating the i3 electric car) plus some steel and aluminum pieces.

The pack has been engineered for extreme temperatures—and, likely, some tough durability standards. It comes with three cooling circuits, a heat pump, a water-cooled condenser, and a system that can help harness excess heat from drive units to help keep the battery warm in the cold.

The iX has a modular battery pack that includes a gross energy content of 111.5 kwh and a usable capacity of 106.3 kwh. It’s built around BMW’s fifth-generation electric drive systems, with a boost of about 30% in power density for the drive system as a whole.

Considering the very snub-nose look from the front, the shape of the iX is deceptively smooth, with a streamlined body and management of aerodynamics around details like the door handles and mirrors helping achieve that. It uses electronically controlled air flaps to intake only as much cooling air as is required.

A front double-wishbone, rear five-link suspension design carries the big, family-sized SUV, and luxury is the keyword here. The use of elastic bearings at the front and rear motors help isolate occupants from road and motor vibration and harshness. A two-axle adaptive air suspension is available and includes automatic leveling plus electronic controls for damper firmness at each wheel.

Steering is speed-sensitive and has a variable rack ratio, and optional Integral Active Steering adds some steering at the rear wheels, steering in the direction of the front wheels at higher speeds to add stability or in the opposite direction at lower speeds to aid maneuverability.

Altogether, the driver can select from high, medium, or low regeneration, with the ‘B’ position eliminating “creep” and introducing more one-pedal driving characteristics.

BMW also wears sustainability on its sleeve. The iX has wound motors that aren’t dependent on rare-earth materials, and the proportion of cobalt in the battery cells’ cathode material was cut to less than 10%. The cobalt and lithium for those cells is procured directly by the company. Lithium comes from Australia, it says, and while the cobalt doesn’t come from the Democratic Republic of Congo, a pilot program there might provide future socially sustainable mining.

For both vehicle manufacturing and battery-making, BMW is using electricity from renewables both for the vehicles and battery casings, and asking battery cell makers to use electricity from renewable sources. It’s also procuring the aluminum casings for its motors from a facility in the United Arab Emirates that supplements its production with solar. And BMW says that each iX includes about 132 pounds of recycled plastic.

The 2022 BMW iX will be one of the debut vehicles for an eighth-generation BMW iDrive system, featuring dual screens—including a 14.9-inch central one—plus a head-up display and natural-language voice commands. Navigation is cloud-based, with charging-friendly routes dynamically calculated, allowing for live traffic information. There’s also an interior camera with low-light capability that can function as part of a future Remote Theft Recorder—with owners to decide what it records and when.

The iX can handle up to two 5G SIM cards, offering a faster, low-latency connection for some features, as well as hot-spot capability for up to 10 devices and HD-quality video streaming. It also offers BMW Digital Key Plus, which harnesses ultra-wideband tech in the iPhone’s U1 chip to effectively take the place of a key.

BMW hasn’t yet detailed the iX’s exact standard-feature set in U.S. form—or its options—and we bet there will be abundant chances to drive the sticker price of an iX well into six-digit price territory. BMW says that it will include $100 in EVgo credit, for network stations, with each iX. And in the meantime you can pre-order one with a $1,500 fully refundable deposit.

Globally, BMW aims to have 25 new “electrified” models on sale by 2023, with the majority of those all-electric. Even after BMW decided not to bring the iX3 compact electric crossover to the U.S., the iX is the first of two new fully electric vehicles due to arrive in the U.S. by mid 2022. The second is the Model 3–sized BMW i4 that aims to outdo the Model 3 in handling, if not range.

This preview was originally published in June 2021, with this update reflecting deeper information about the U.S.-market version.