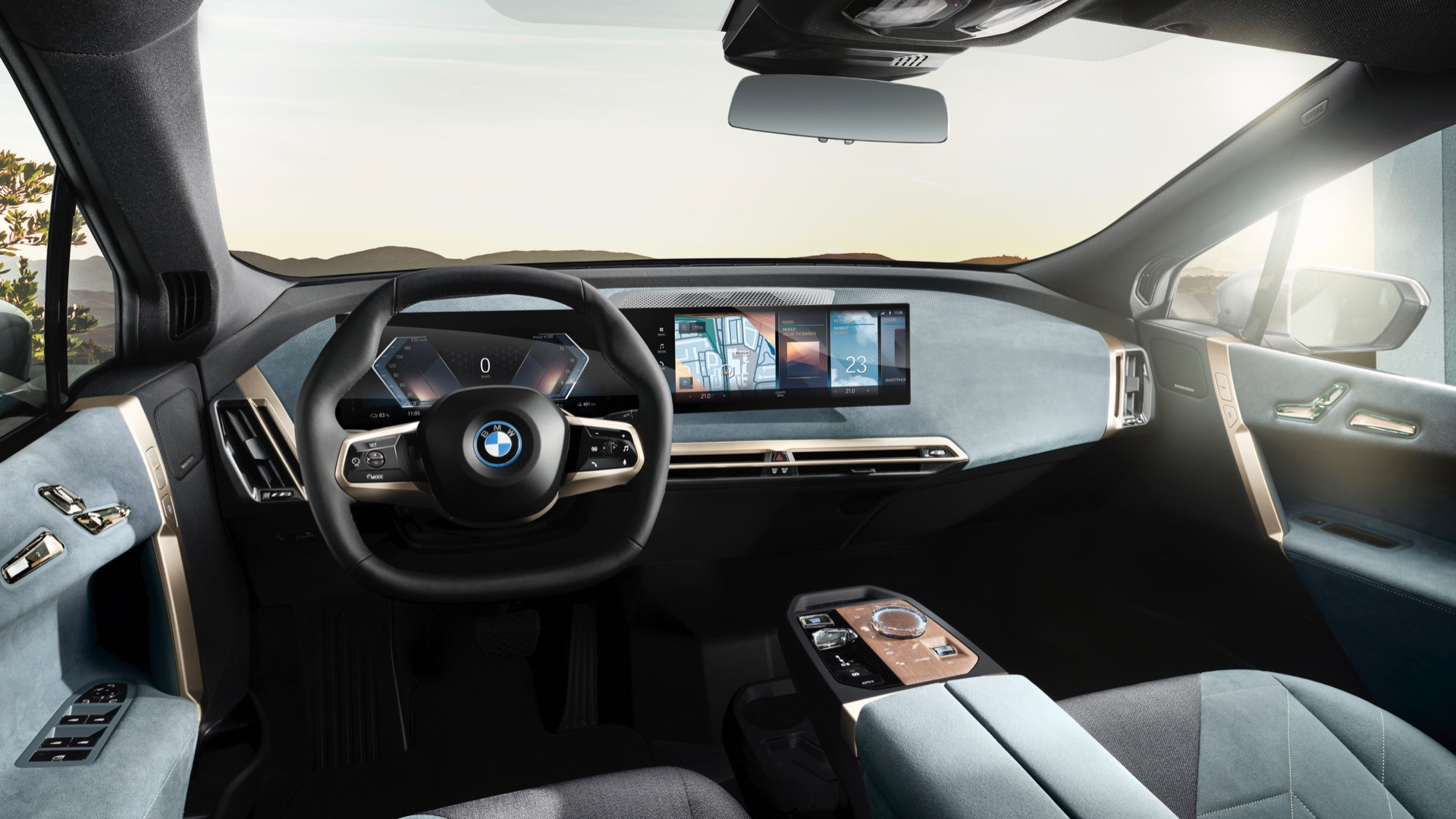 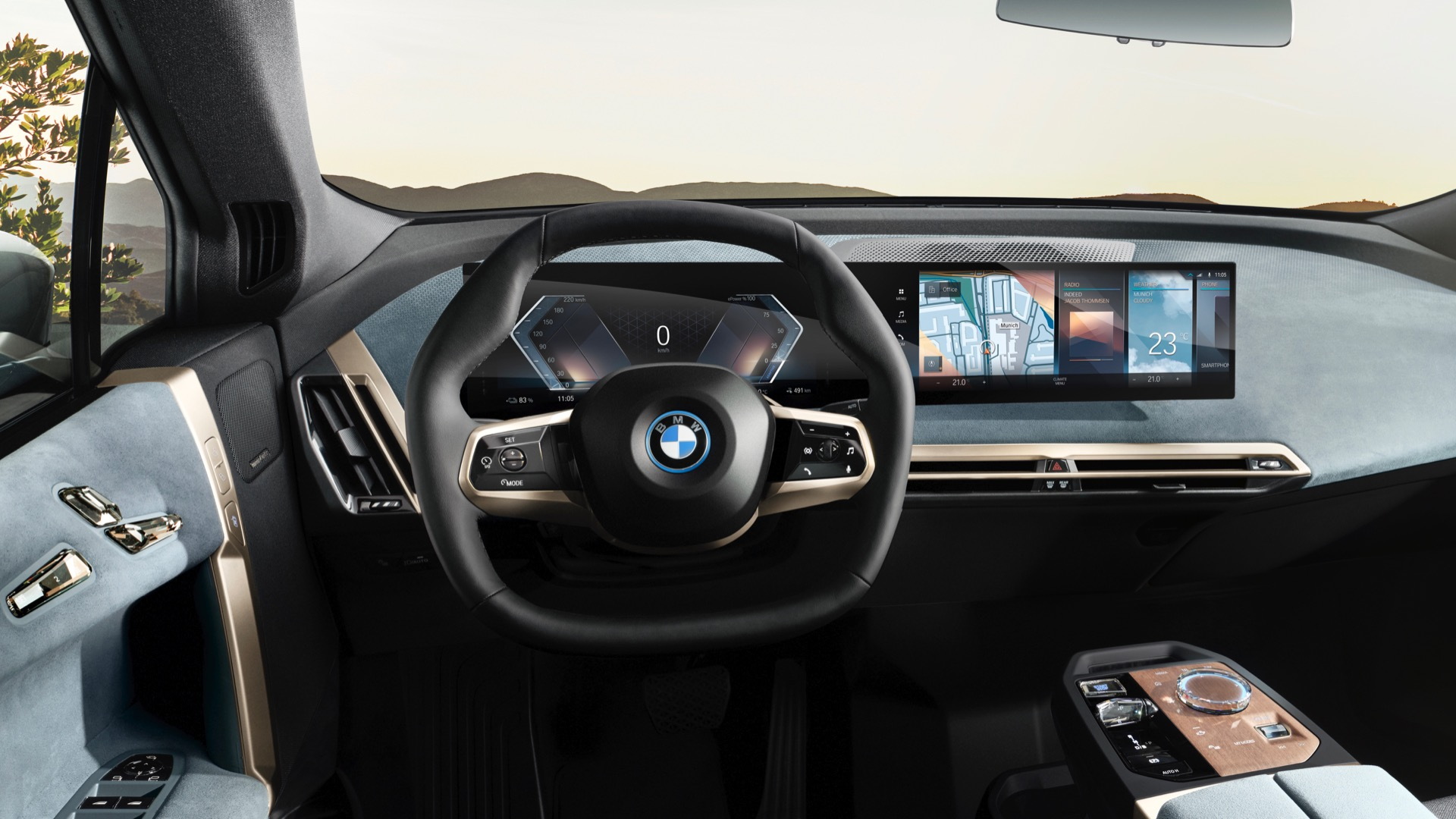 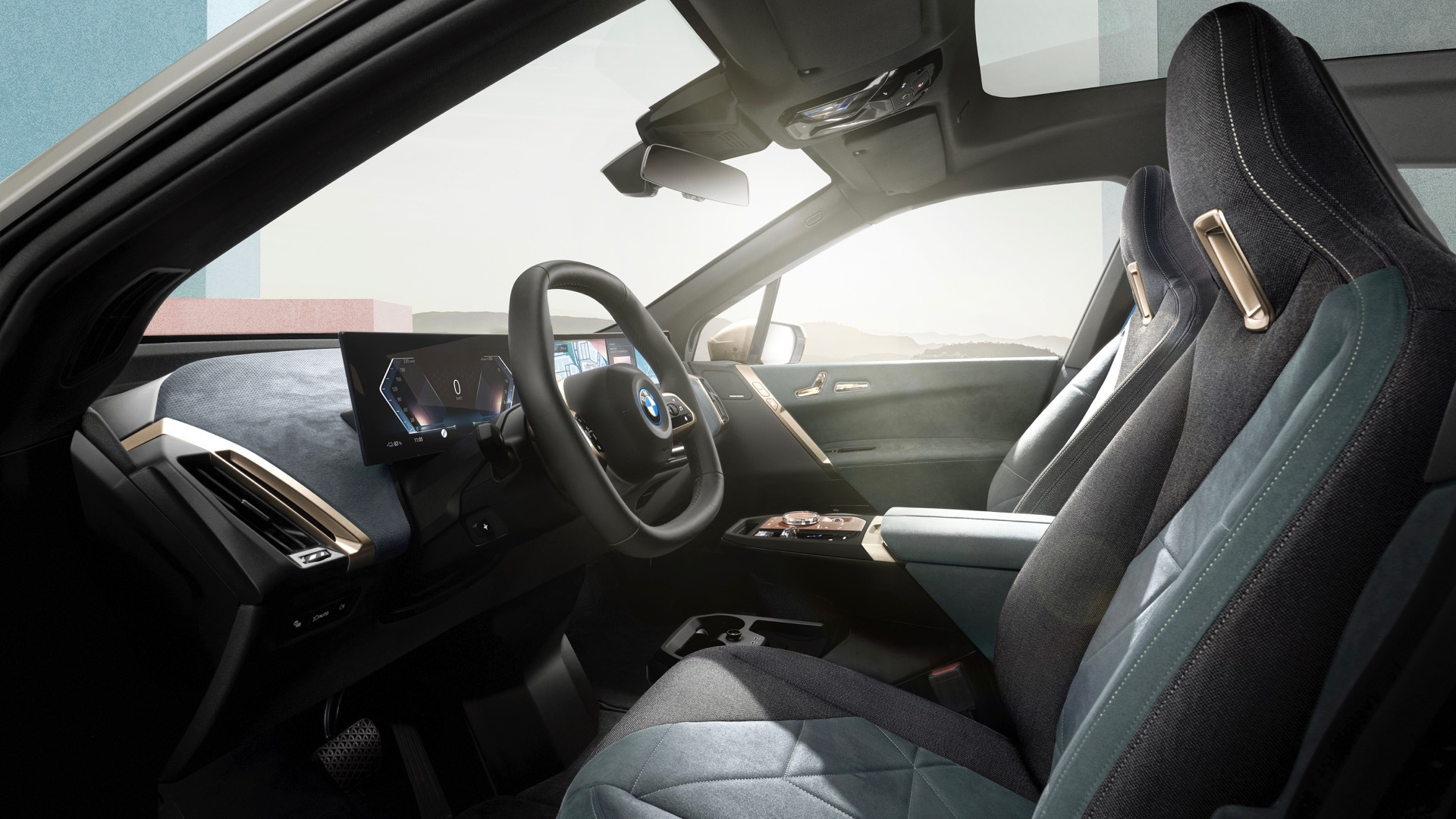 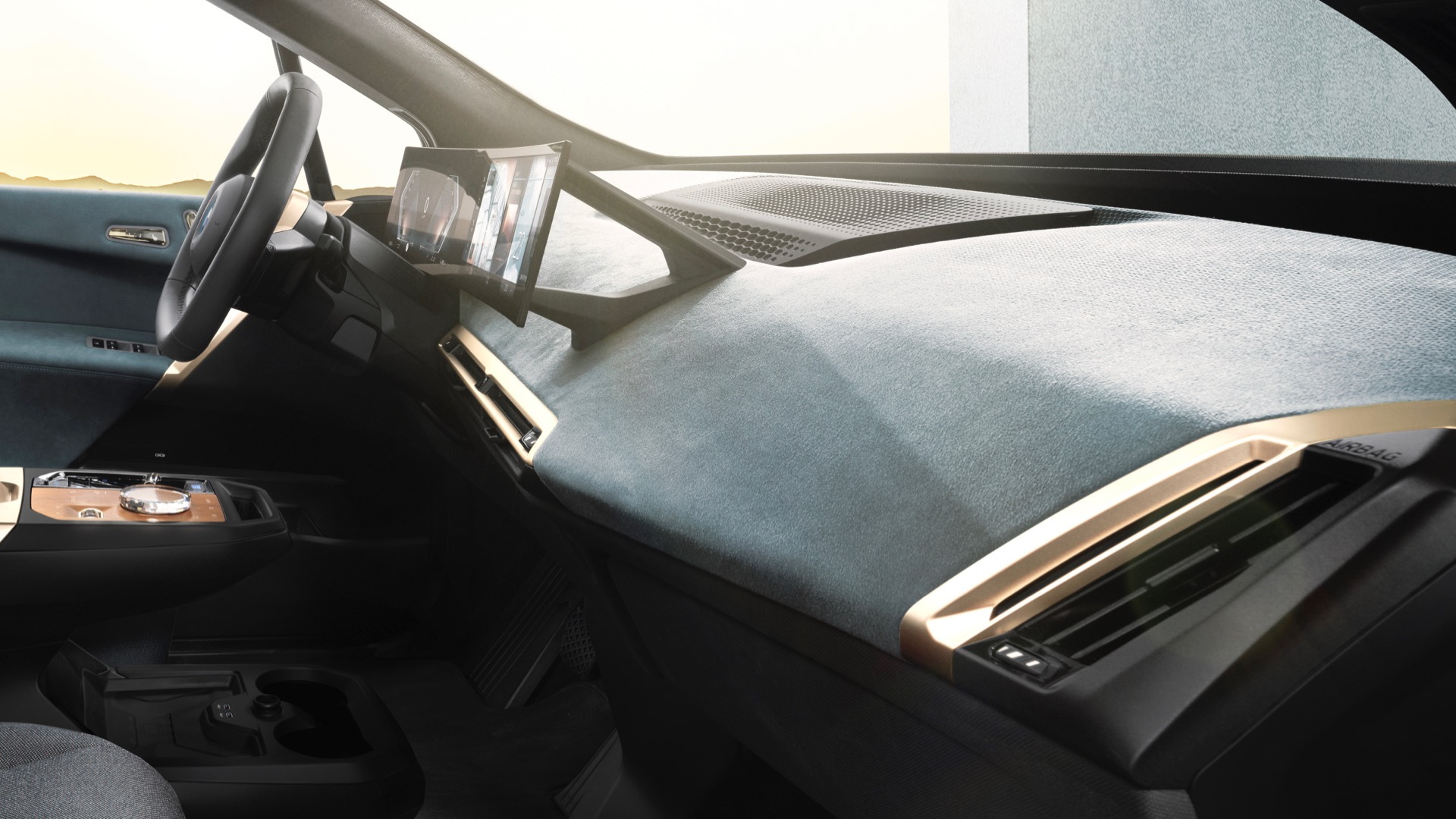 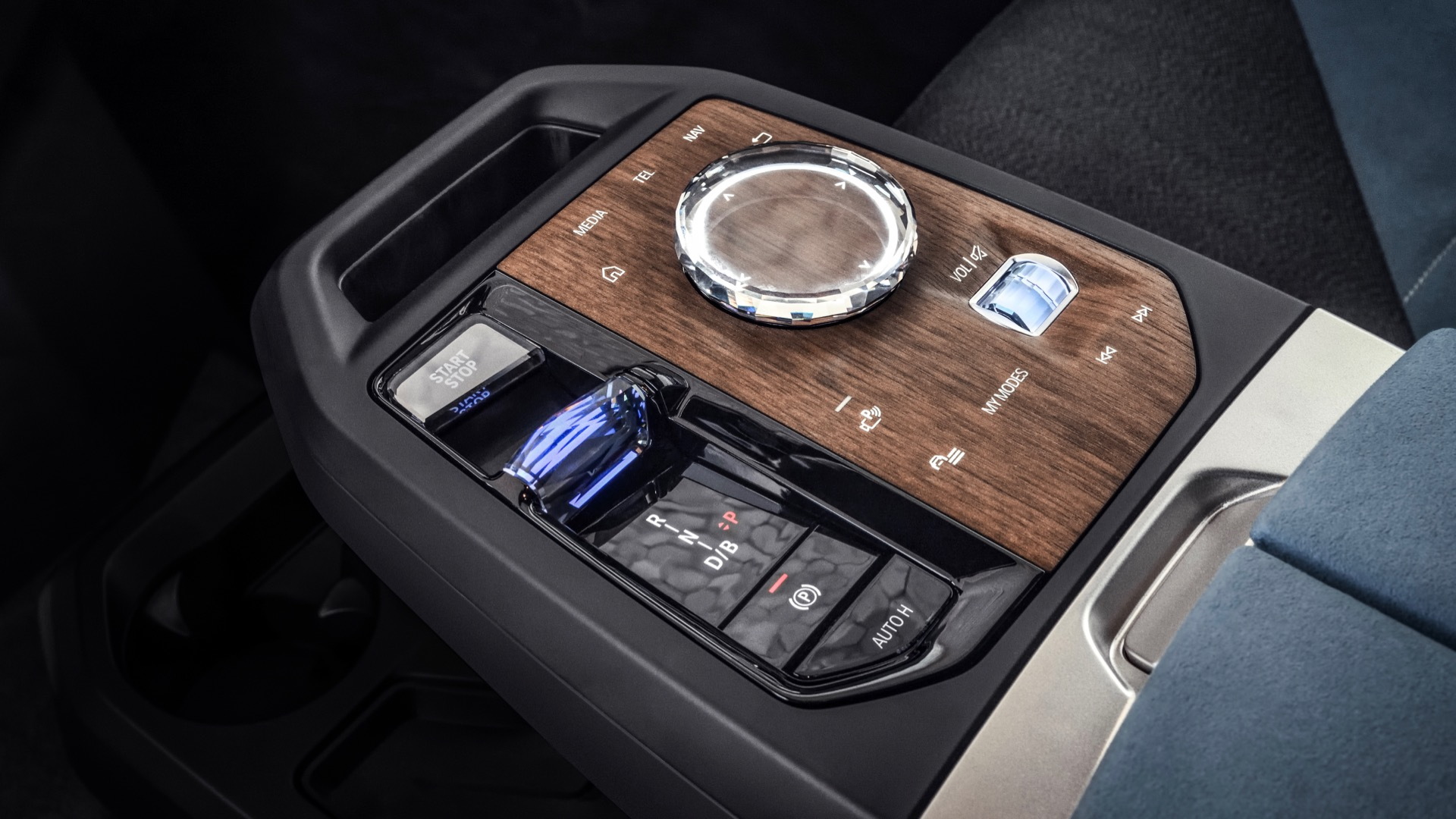 The 2022 BMW iX will be positioned as the automaker's technological flagship, so it's fitting that the electric SUV will debut the latest BMW iDrive 8 infotainment system. Unveiled Monday, iDrive 8 adds features like an integrated head-up display, as well as greater reliance on screens and data than ever before.

The iX will get a pair of curved display screens, including a 12.3-inch screen that takes the place of a traditional instrument cluster, and a 14.9-inch screen that handles control functions, BMW said in a press release. They're placed side by side to make one long display spanning about half of the dashboard.

While the iX will have BMW's traditional iDrive rotary controller (rendered in glass, in the case), BMW also expects drivers to use its Intelligent Personal Assistant voice-control system, now featuring an animated "face" on the display screens, and improved responses thanks to a larger data pool, according to BMW.

Data will also be used to determine default settings for the climate control system, BMW said, adding that it has 440 million customer trips to reference. Air conditioning settings will also consider the number of vehicle occupants, where they are seated, and the intensity and direction of sunlight. Alternatively, the system can also learn drivers' preferences and make adjustments accordingly.

All of this data will be routed through a 5G connection. BMW said the iX has 40 onboard sensors and 30 antennae, and will be able to transmit a DVD's worth of data in less than a second. 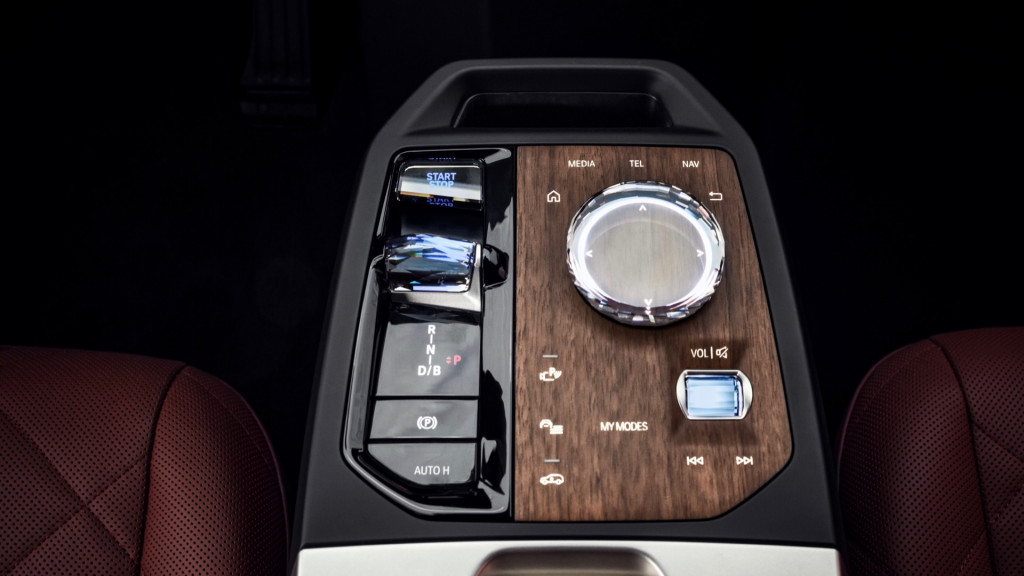 Like many modern vehicles, the iX will have programmable drive modes. But iDrive 8 allows syncs settings for the displays with settings for the powertrain and chassis, and allows for a greater degree of personalization, according to BMW. The iX will launch with Efficient, Sport, and Personal modes, with more to be added at a later date, BMW said.

The new iDrive system will also include BMW Maps cloud-based navigation, which can automatically show the locations of nearby charging stations, according to BMW. The automaker previously said that Apple Maps will play a role in finding charging resources in upcoming EVs, but this release didn't clarify what that dividing line is between the native system and what's phone-based.

One more notable feature of iDrive 8 is a digital key, allowing drivers to use a smartphone in place of a traditional key fob, not unlike what you can already do with a Tesla, or Hyundai Sonata Hybrid.

Originally referred to as the iNext, the iX launches later this year, but likely won't make it to the United States until 2022. BMW has quoted a 300-mile range, plus 500 horsepower for the range-topping version. The BMW i4, a low-roofed sedan expected to be close to the Tesla Model 3 in size and price, will get iDrive 8 as well.

Rival Mercedes-Benz is also planning to debut a new interface with its upcoming EVs—led by the EQS arriving later this year. Dubbed Hyperscreen, it's based around a full-dashboard 56-inch screen.