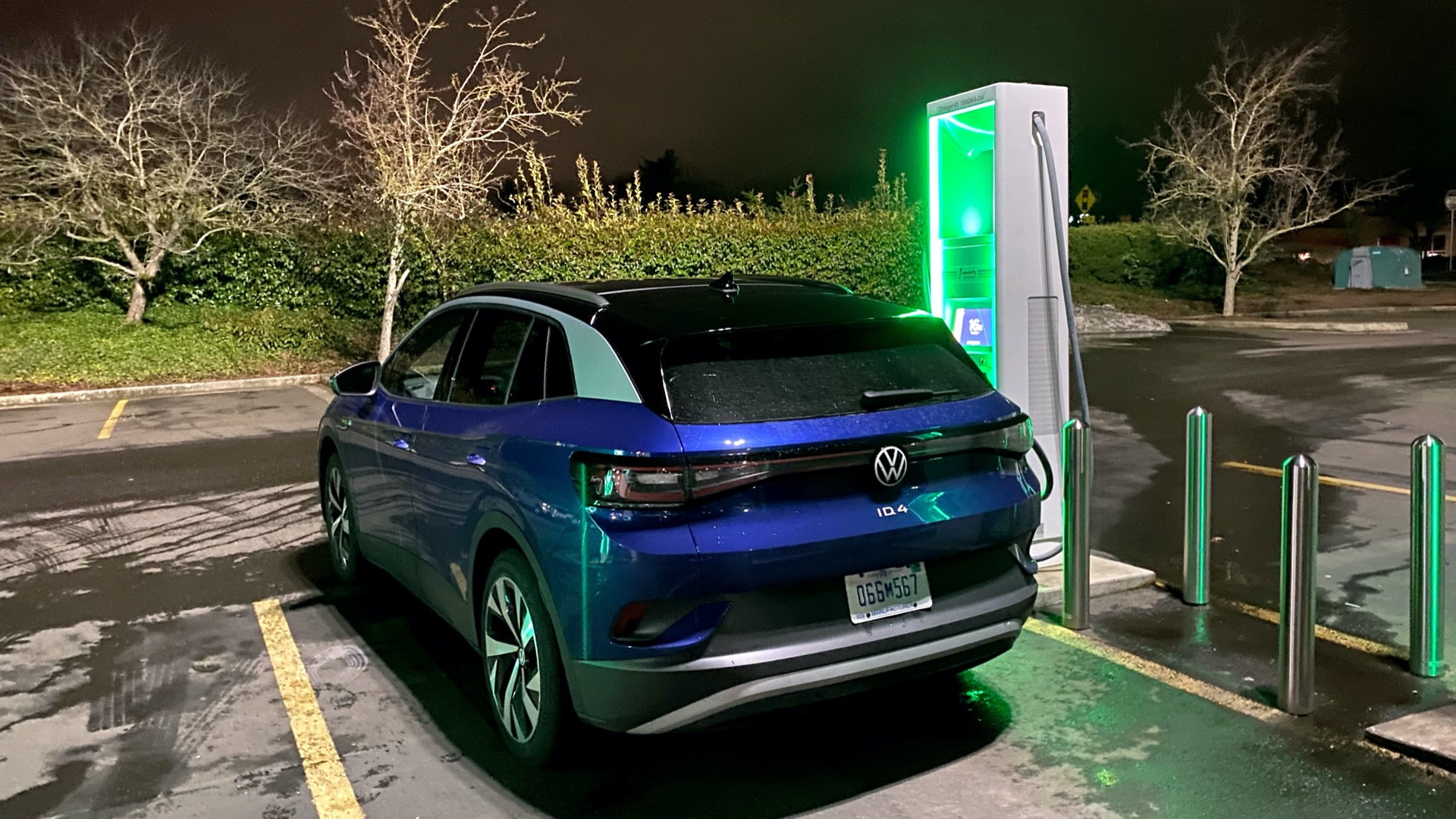 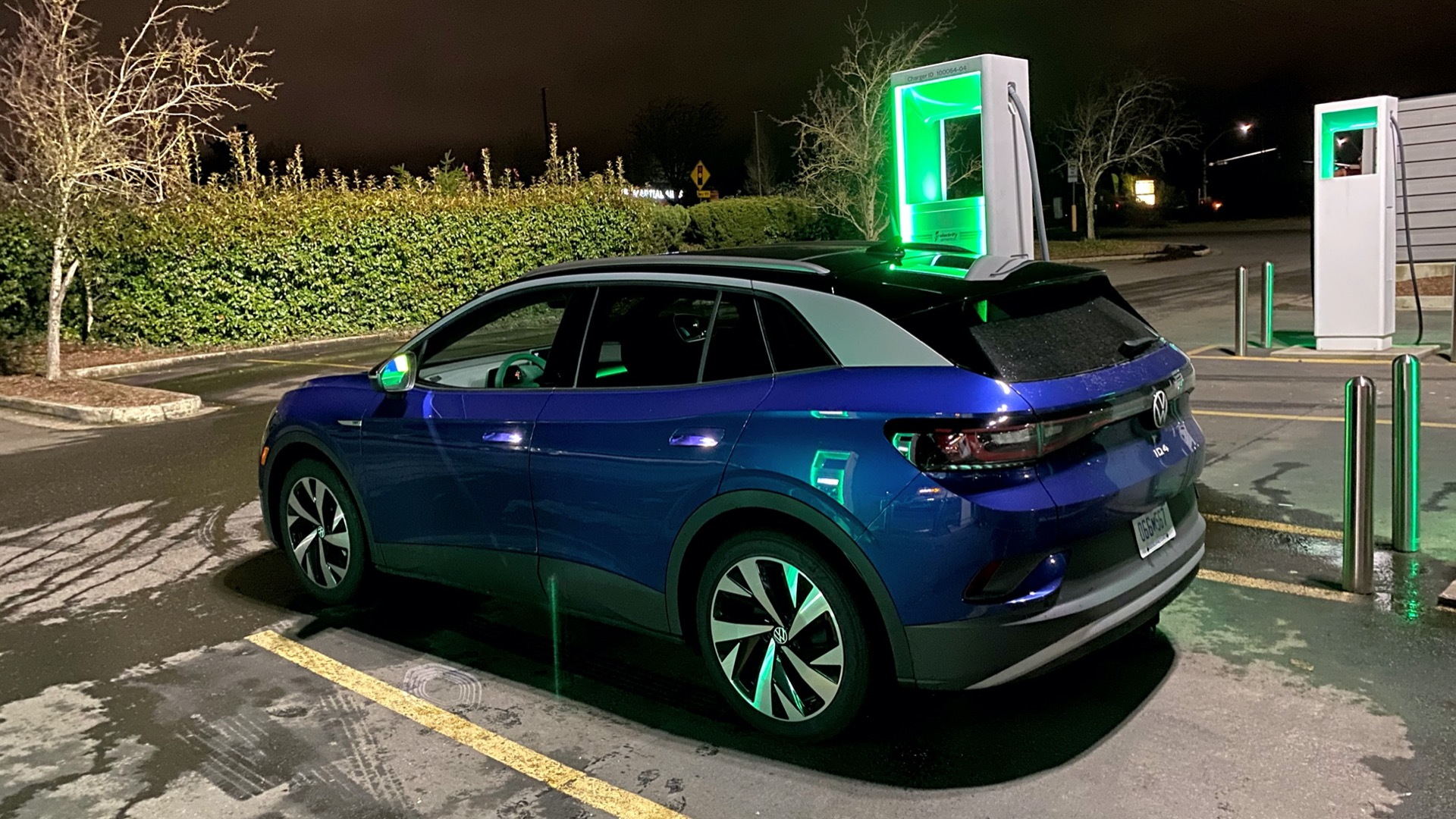 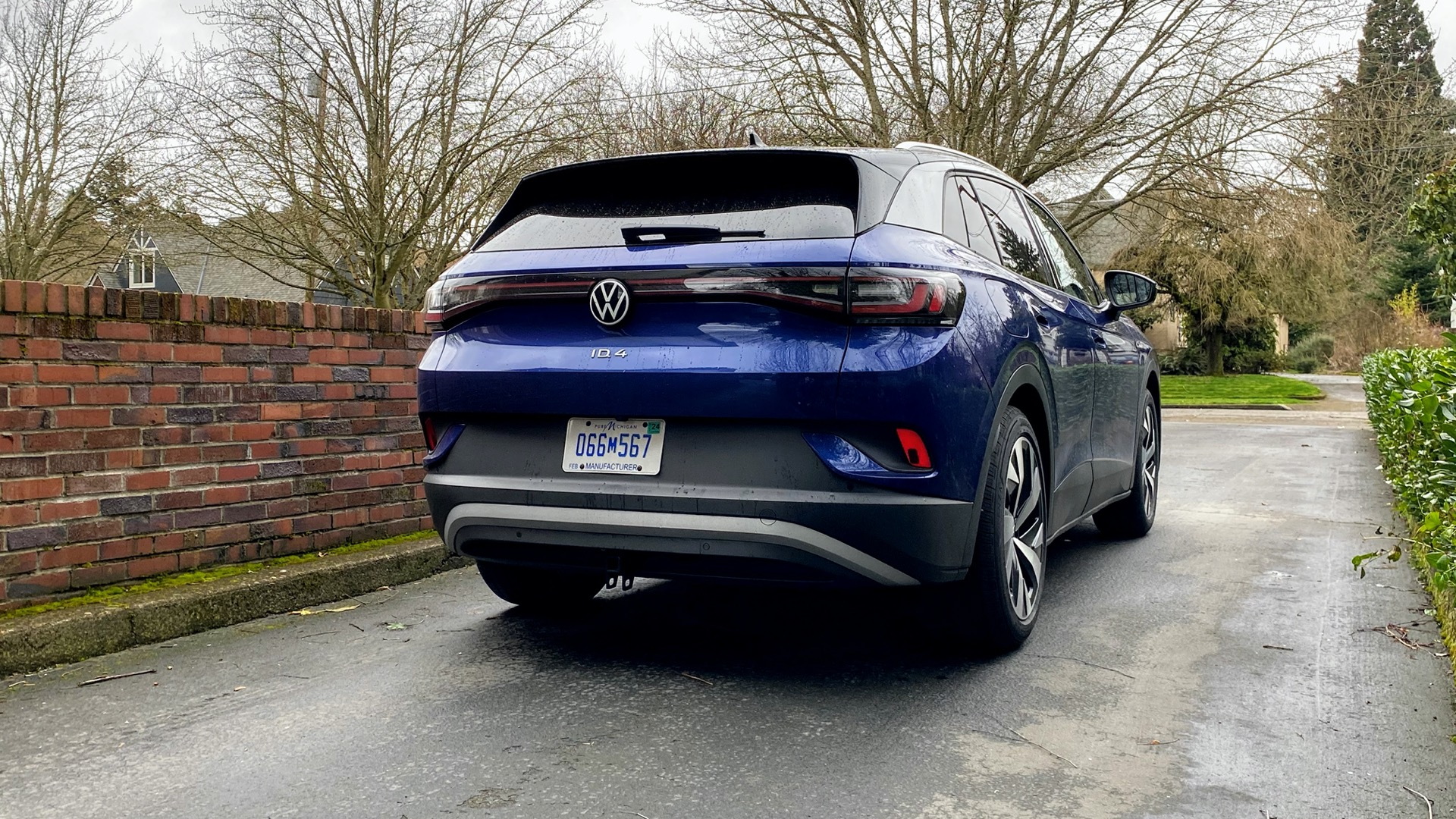 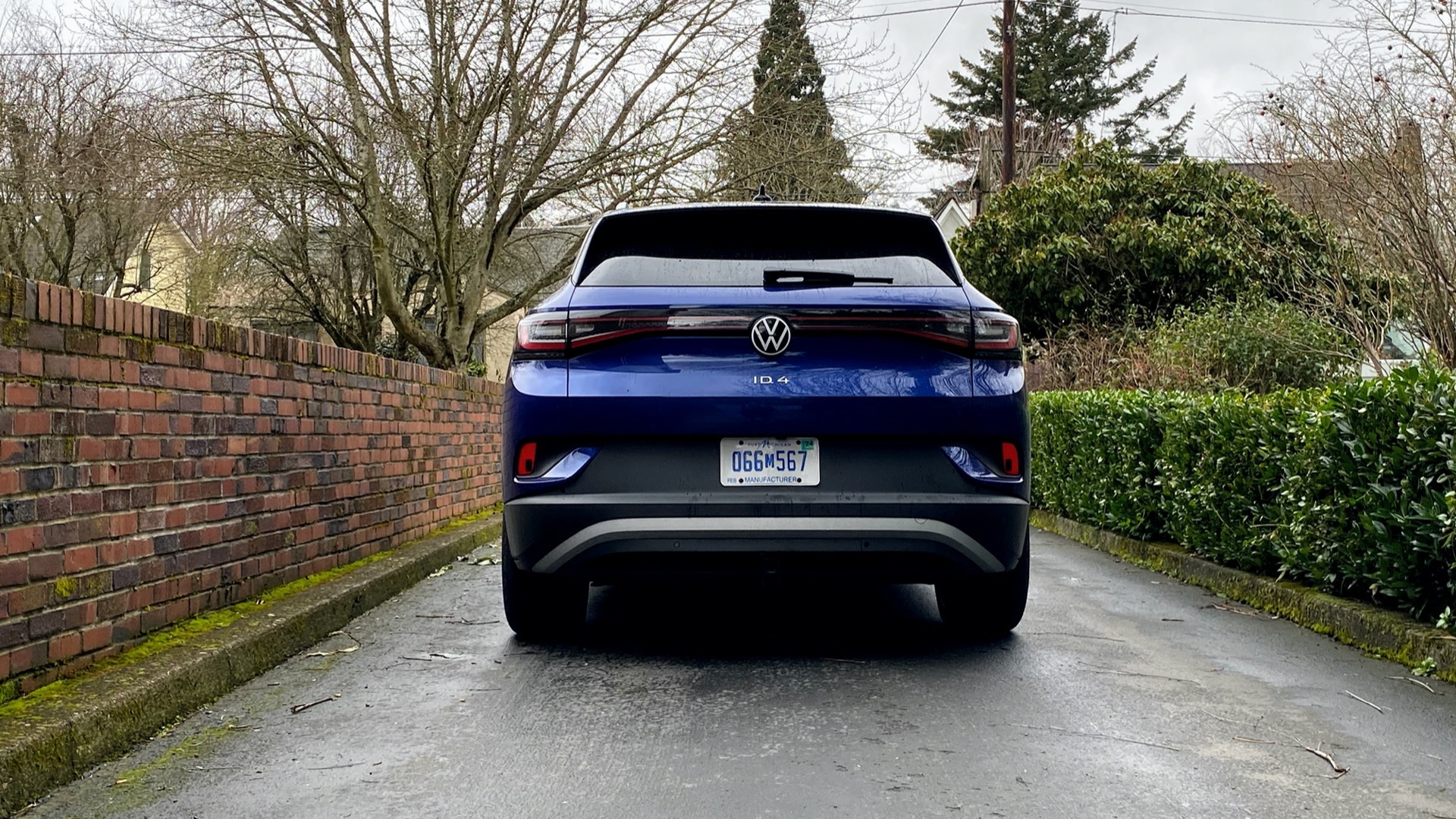 Last week Green Car Reports summed up some of the pros and cons of the 2021 Volkswagen ID.4, based on our first extensive driving experience.

It was a rather polarizing experience, and while I encourage you to read that story, two main questions people have about the ID.4 are: Does it deliver 250 miles of range? And can it charge as quickly as its advertised 38 minutes, from 5% to 80%?

The answers to the above are yes and yes, but in both cases it doesn’t come easy. Read on for the nuance.

During the first portion of my time with the 2021 VW ID.4 I covered what I’d best describe as varied commute conditions—about half of the distance on freeways at 55-70 mph, the rest a mix of city streets, suburban boulevards, and country roads. For most of the time I moved along conservatively with traffic, but I also added a blast to higher speeds and a couple of acceleration runs. Most of it was at an ambient temperature of about 45 degrees. 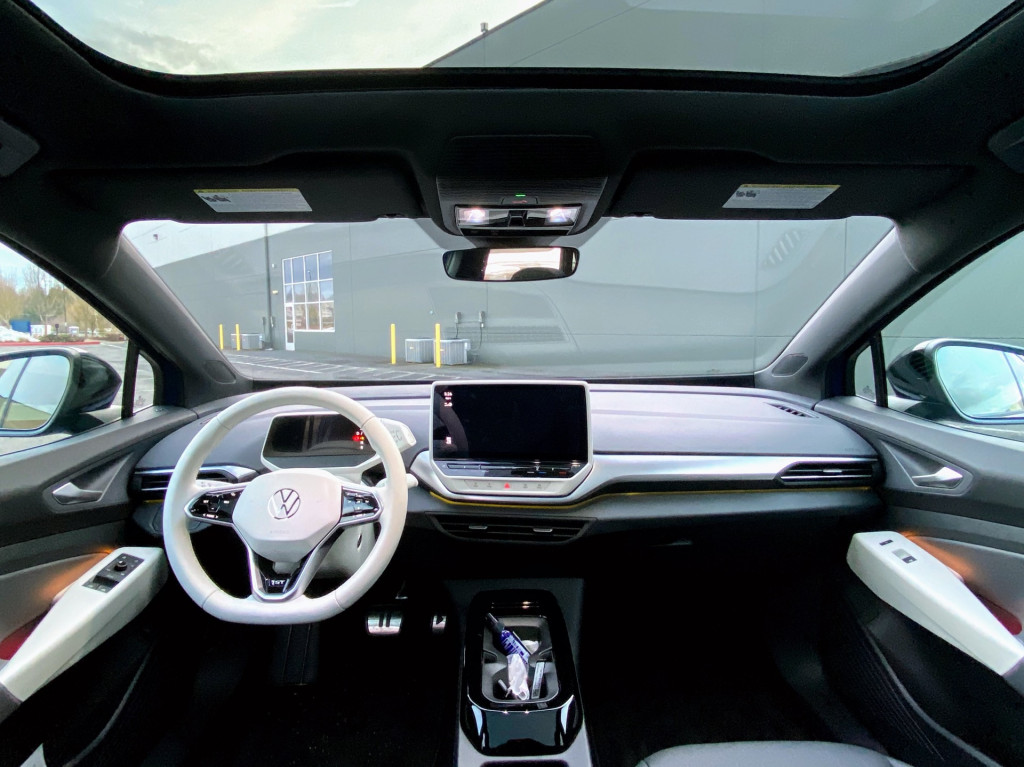 According to the trip computer, I covered 189 miles and averaged 2.6 miles per kwh, while using 89% of the battery’s state of charge.

That suggests a range of more than 210 miles in cold-weather commuting with more than half of it on the freeway. With smoother driving, I see 250 miles as being achievable either with more cabin preconditioning while plugged in or in warmer weather.

Now for the tougher test for an electric car: What kind of range can you expect on a 70-mph road trip?

For this, I acted like an owner without a lot of extra time would for a highway trip—not by reducing travel speeds, but by setting myself up for success with some best practices. I preconditioned the cabin with the app, then when in the ID.4 set the temperature on the driver’s side only to 70 degrees, supplementing the climate control with the great seat heater.

In an out-and-back highway trip on Highway with an outside temperature of 39 degrees, I  covered 174 miles and averaged 2.4 miles per kwh, with an indicated 9% state of charge remaining.

That suggests a 70-mph range in chillier temps of about 190 miles, although it’s reasonable to suspect that mileage would easily top 200 highway miles in warmer temps.

The driving efficiency numbers I saw, overall, quite closely align with those I saw from the Ford Mustang Mach-E, most of it in similar temps, although the ID.4 appeared to be the more efficient of the two in relaxed lower-speed driving.

The fast-charge: Great while it lasted

I arrived at the Electrify America station in Hazel Dell, Washington, with that 9% charge and 17 miles left, and plugged in. Unlike the Ford Mustang Mach-E I drove in December, or the Audi E-Tron Sportback I drove more recently (review soon), there’s no Plug&Charge compatibility that lets Electrify America simply recognize your car and bill you. 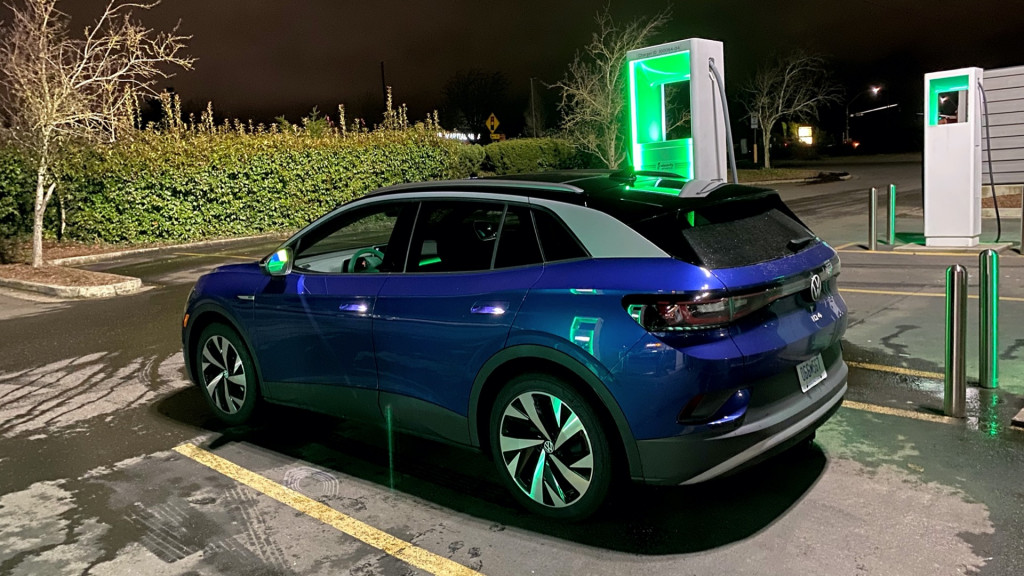 So I looked to the Electrify America app to pick up some of that clever functionality. But I quickly discovered that it doesn’t automatically recognize when you’re at a station. I zoomed in on the map menu to click the station. That opened a list of available charge connectors at the station, and the connector I chose with the ready screen wasn’t available.

After choosing a new charger, and approving the session in the app, things began very well, with the charger ramping up to 129 kw within seconds, then settling to 127 kw. VW’s official max for the ID.4 is 125 kw, so given modest charging losses, it was pegged at its max or nearly so. 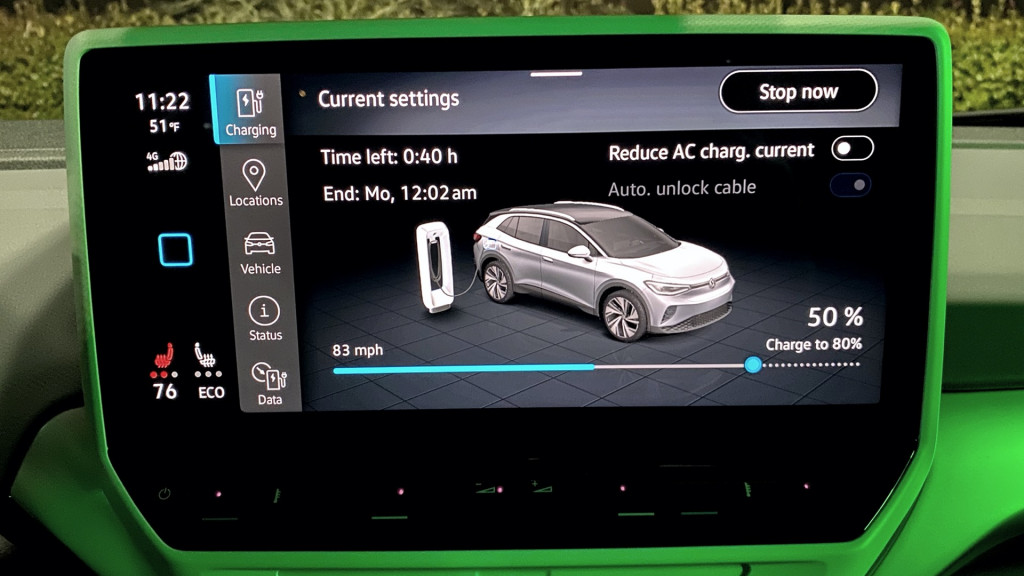 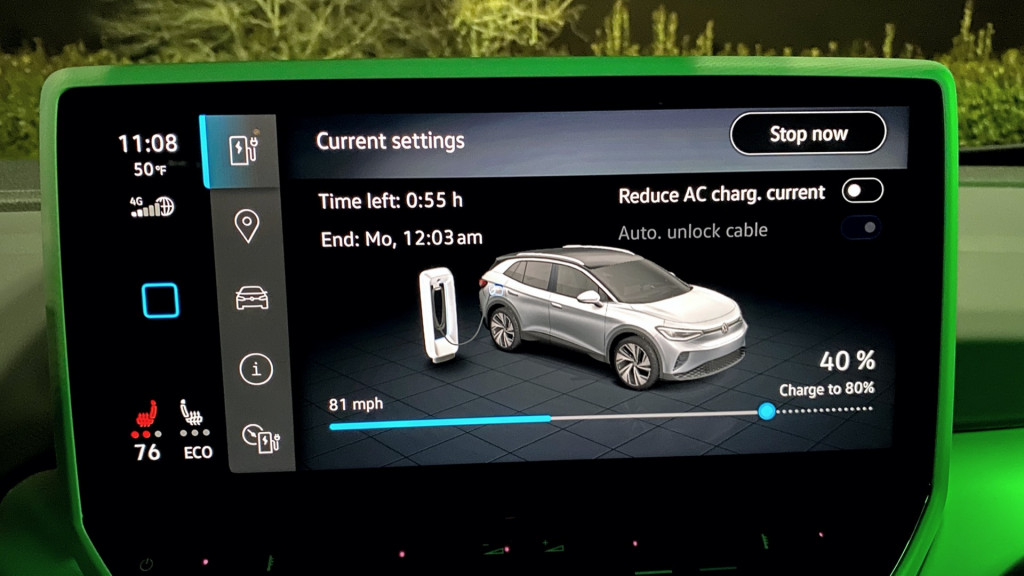 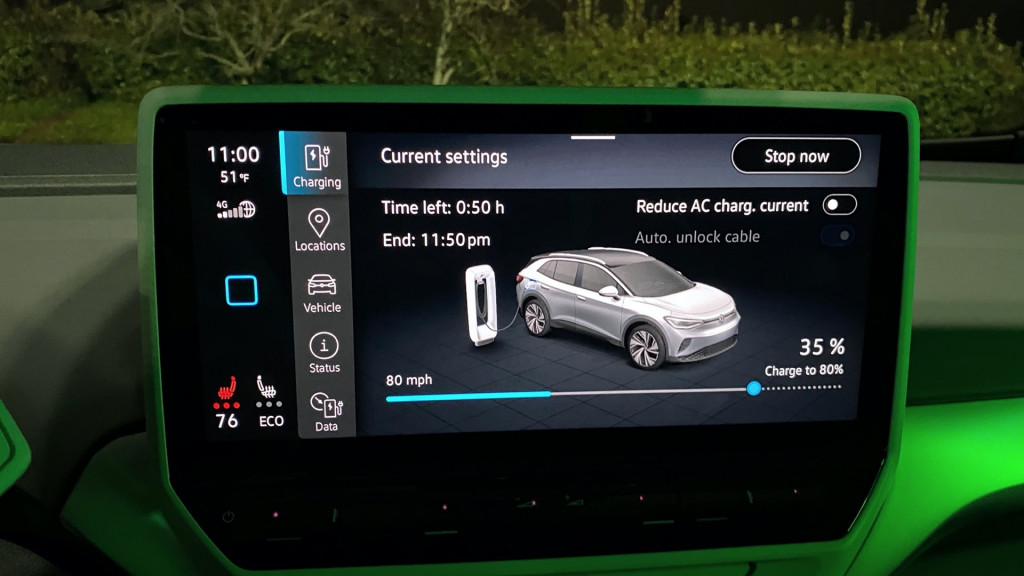 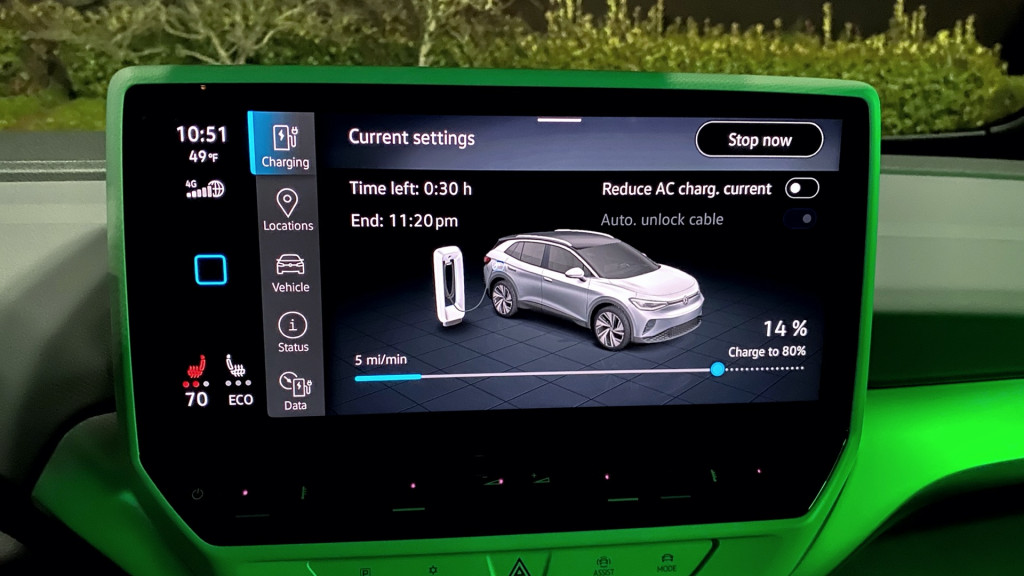 The estimated charge time inside the ID.4 fluctuated between 25 and 30 minutes for the target 80%—a good rate—and stuck there for 7 minutes, quickly reaching 27%. After that, it was all downhill. Within a minute it had dropped to 120 kw, then over the course of the next 5 minutes it dropped to 32 kw (corresponding to 38%). During that time it revised its estimated time to reach an 80% charge an additional  55 minutes. 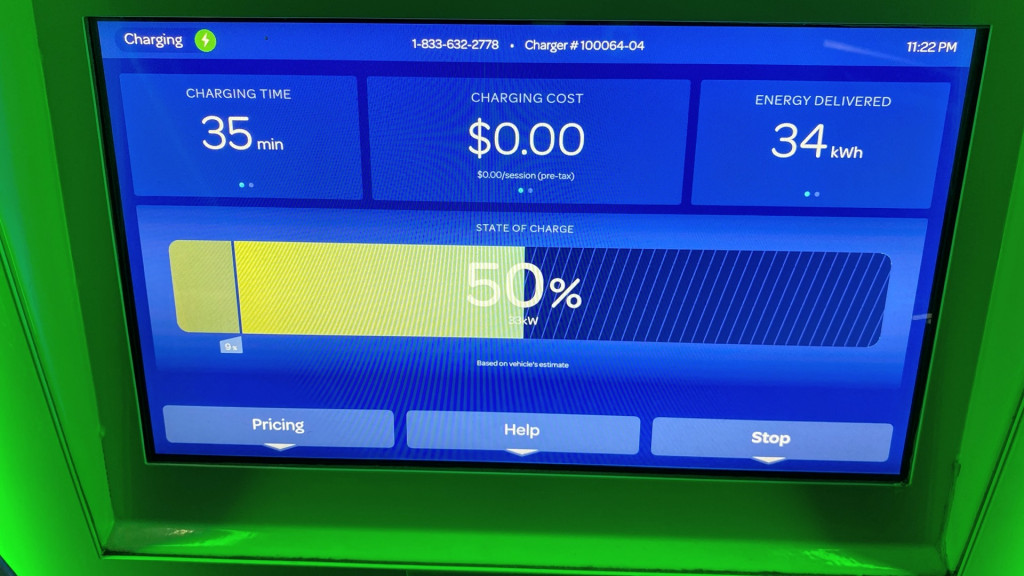 I’ve seen DC fast-charging sessions in some EVs slow momentarily while the battery-cooling system catches up. And I know plugging in with a higher state of charge is seldom likely to speed things up. Meanwhile, no errors displayed on the charger screen. So I stuck with it.

The situation didn’t get any better, and I aborted the plan at a 50% charge, opting to finish charging at home. 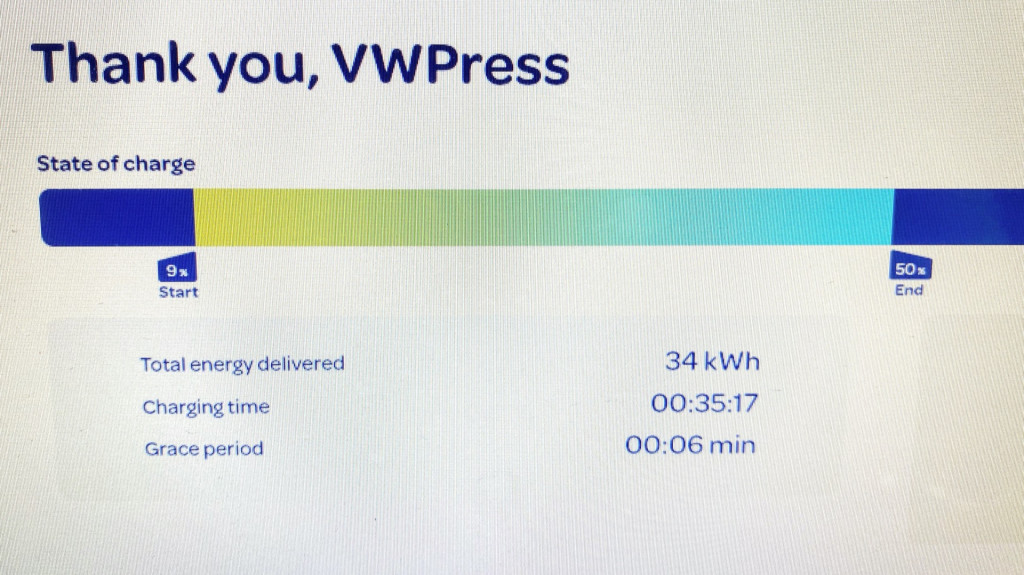 The issue, verified with Electrify America’s charge logs, was with EA’s hardware, not the ID.4. The sudden drop of power was due to a fault thrown by the thermal sensor for the high-voltage charging cable, which the charging network is systematically replacing on all their affected chargers.

Getting to the charger: Unintuitive

Just getting to a charger at this point is a hassle, especially the Electrify America chargers that should be road-trip go-tos and are included with the ID.4 for three years. The native navigation system doesn’t appear to support phrases like “nearest fast charger” or “fast charger along my route,” and while I was presented with a jumbled list of charging stations in the nav data, it’s not curated by charging rate or network from what I could tell.

I navigated to the charging station, which I knew was in the vicinity but wanted an exact exit and route, by opening the Electrify America app on my phone  (not a good practice for safety) to verify the location, then asking the native nav system to take me to the Walmart next door. That it understood.

TAKEAWAYS ON RANGE AND CHARGING

The ID.4 delivered promising numbers, predictable range, and no big surprises. I see no reason why it won’t deliver on its range number of 250 miles, or on its claimed 5%-80% charging time in 38 minutes. 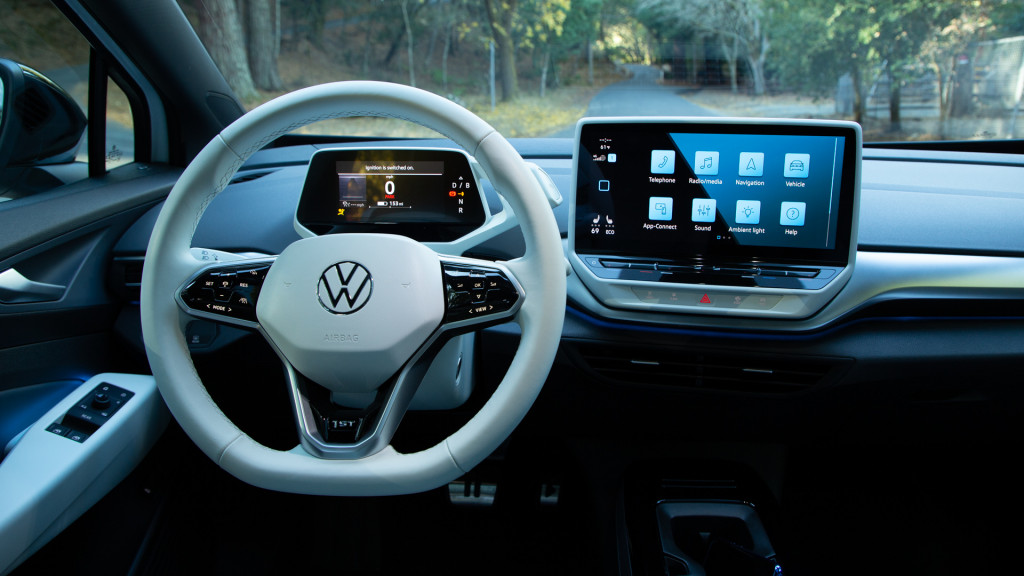 Tech, unfortunately, got in the way a bit, in multiple ways.

There isn’t a continuous interface that follows the owner inside and outside the car. VW’s Car-Net app appeared to be buggy—and not much different than when we tested it five years ago with the e-Golf—and it froze several times on my common-hardware iPhone 11. The Electrify America app, which is where VW wants owners to manage fast-charging access, appears to be incompatible with Apple CarPlay, thus not truly usable on the go.

Like Tesla, Ford, and others, VW needs a single coordinated app that can handle car security, road-trip charging, home charging, preconditioning, and even purchases.