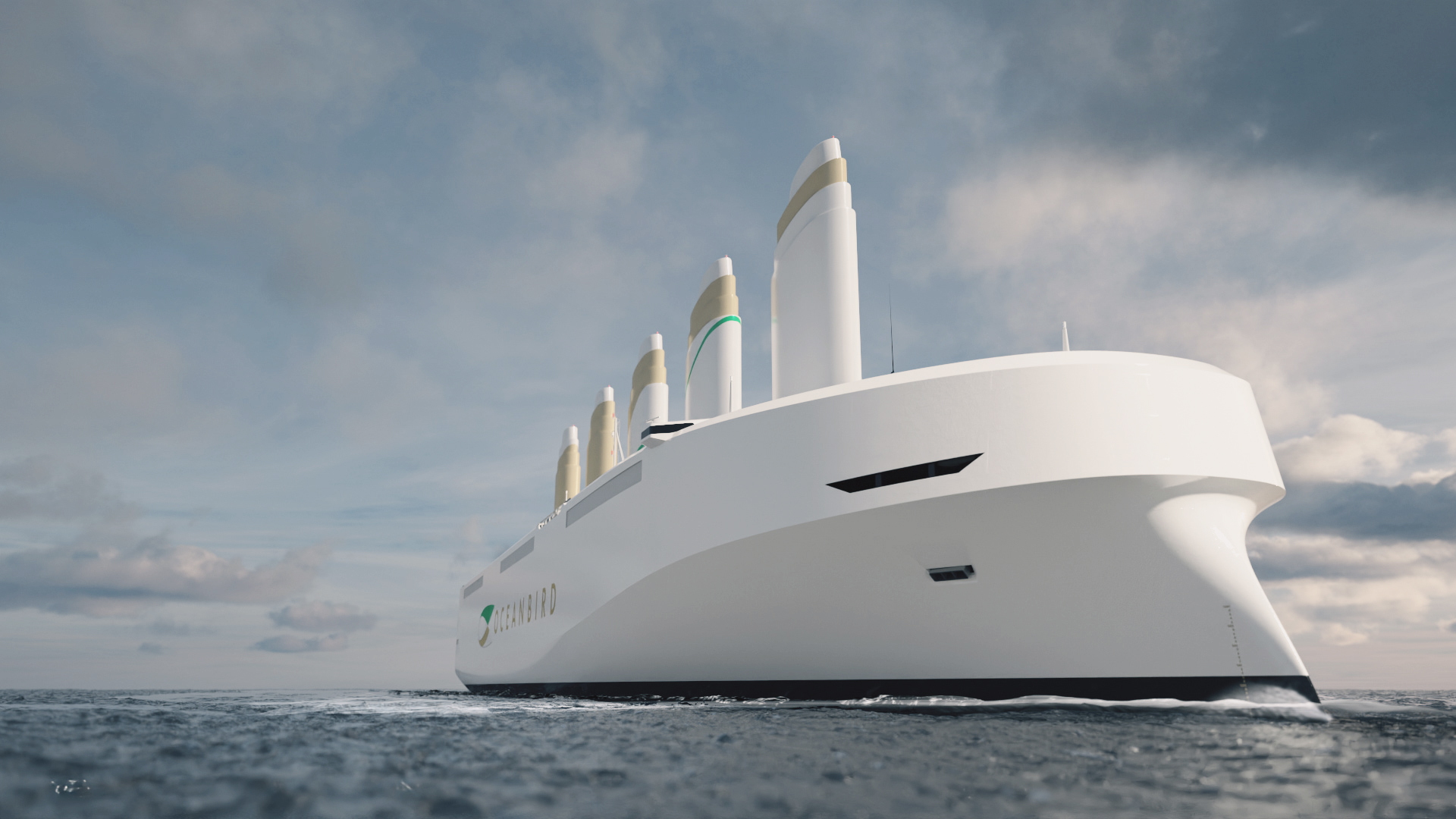 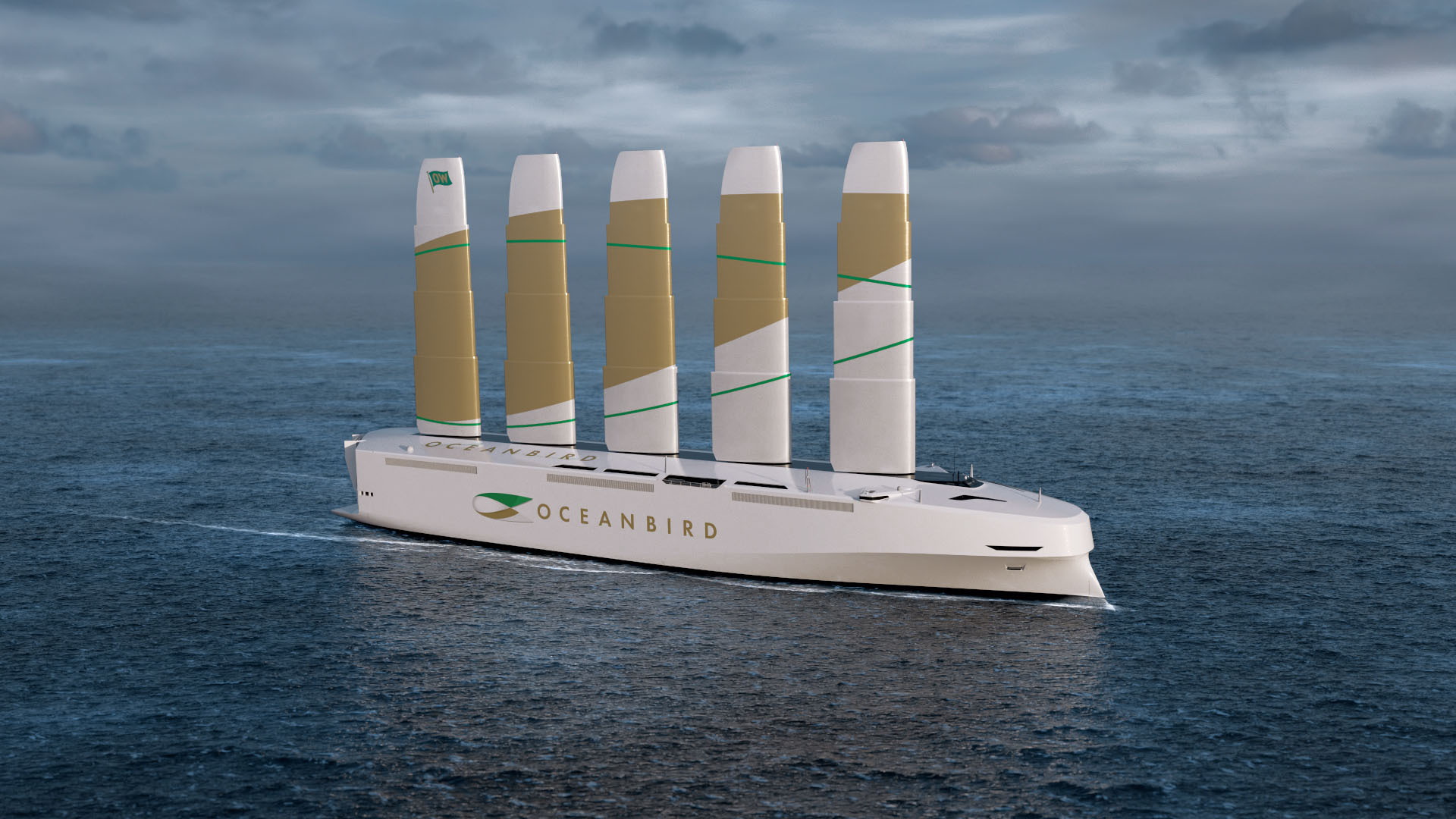 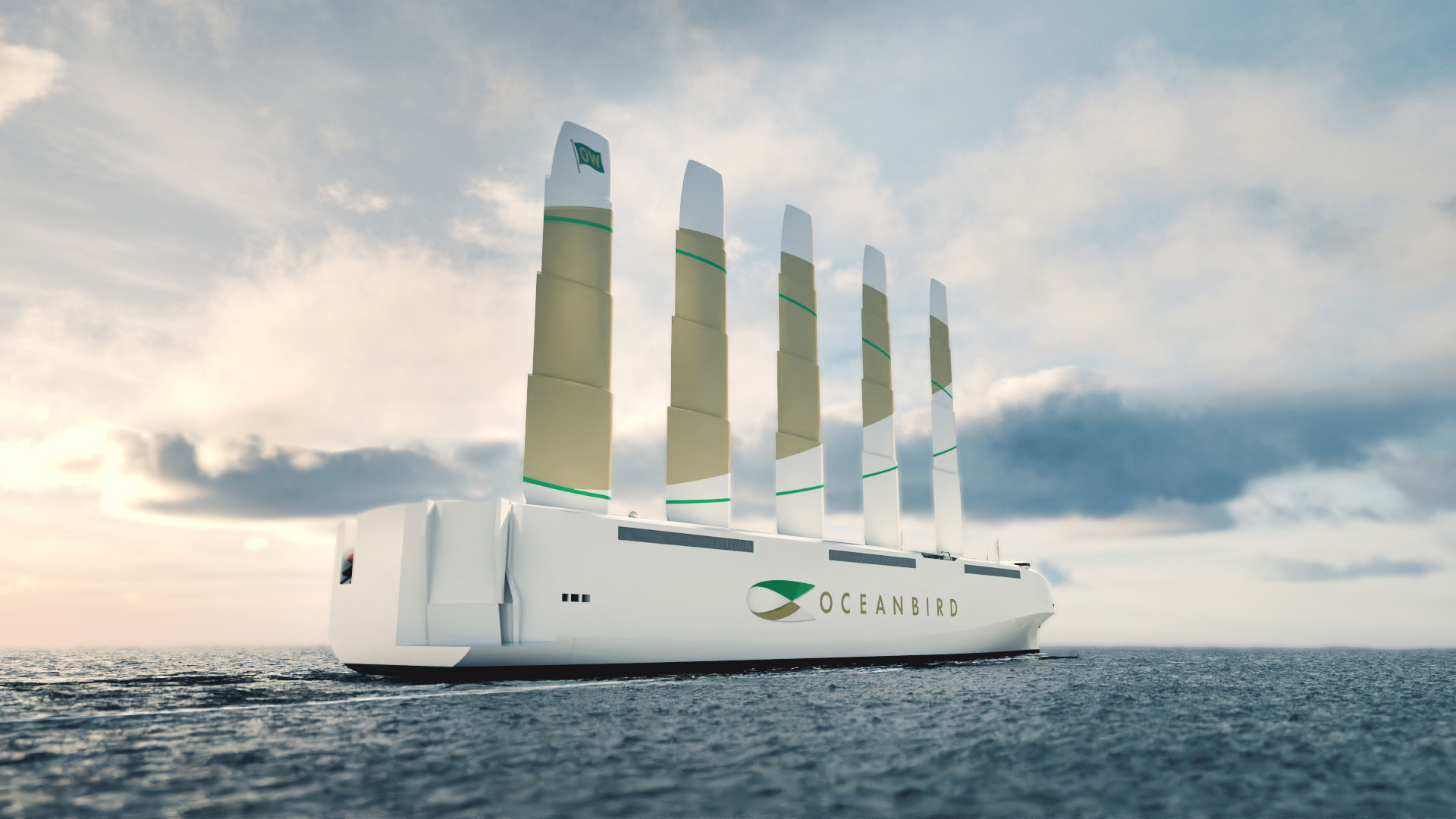 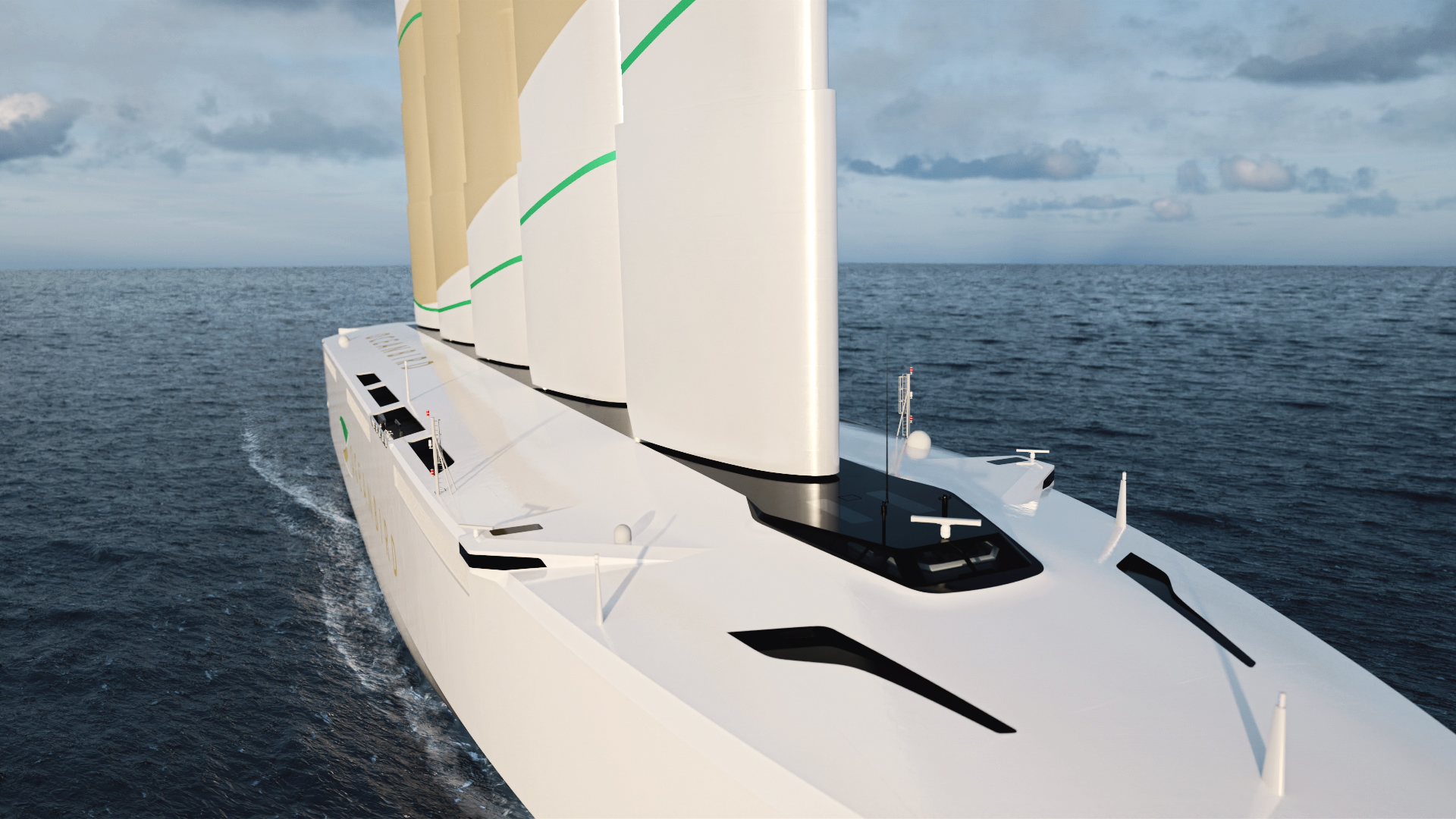 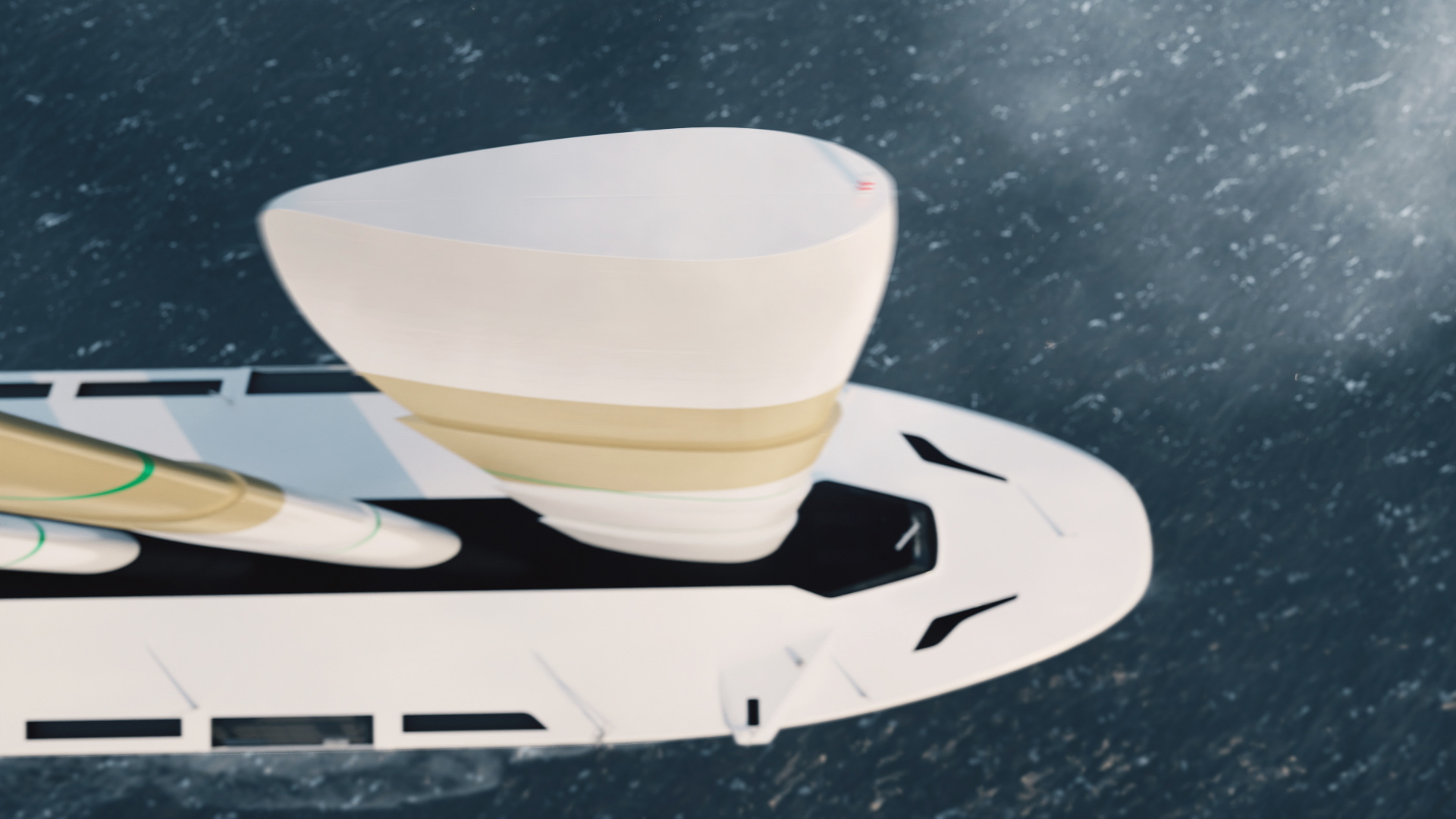 Sailing ships were once the backbone of international commerce, and now a Swedish shipbuilder is trying to give sails a high-tech update in order to reduce emissions.

Oceanbird is a proposed a 35,000-ton, 650-foot, transoceanic car carrier, powered mostly by wind, that can reduce carbon emissions by a claimed 90% compared to a conventional ship. The ship was designed by Wallenius Marine, which is working with the Swedish government and several research institutions on the project, according to CNN. The partners hope to have a full-size ship sailing by 2024.

The ship's sails are no mere canvas. Five telescopic wing-shaped elements stand 260 feet above the deck. They can rotate 360 degrees without touching each other, or retract to 195 feet in rough weather, and to allow the ship to pass under bridges.

Vertical wings like these have been proposed before, but this is likely the first time they will be used on a full-size cargo ship.

Made from steel and composite materials, they will be the tallest sails ever constructed, according to Wallenius Marine. Consequently, engineers had to mount sensors on existing vessels to understand the behavior of wind at that height, Mikael Razola, a naval architect and research project manager for Oceanbird, said in an interview with CNN.

Oceanbird's claimed efficiency does come at the cost of speed. Wallenius Marine estimates a top speed of about 10 knots (equivalent to about 11 mph), compared to 17 knots for conventional car carriers. That means an Atlantic crossing will take 12 days—five more than with current ships. But it will still be able to haul 7,000 vehicles, according to the company, and customers—Volvo, for instance—will be able to claim a much lower carbon footprint, all said.

While the emissions of the cars they carry get significant attention, giant cargo ships are a major source of pollution. Shipping accounted for 2.89% of global greenhouse-gas emissions in 2018, according to the International Maritime Organization (IMO), a United Nations agency that regulates shipping. Per CNN, the average car carrier uses 40 tons of fuel per day and generates 120 tons of carbon dioxide—equivalent to driving a single car 270,000 miles.

Other solutions have been proposed to reduce shipping-industry emissions. Swiss firm ABB and Hydrogène de France (HDF) signed an agreement earlier this year to develop a "megawatt-scale" hydrogen power source for oceangoing vessels. A handful of battery-electric vessels have also been launched, including an oil tanker and ferries, but these are much smaller than the proposed size of Oceanbird.