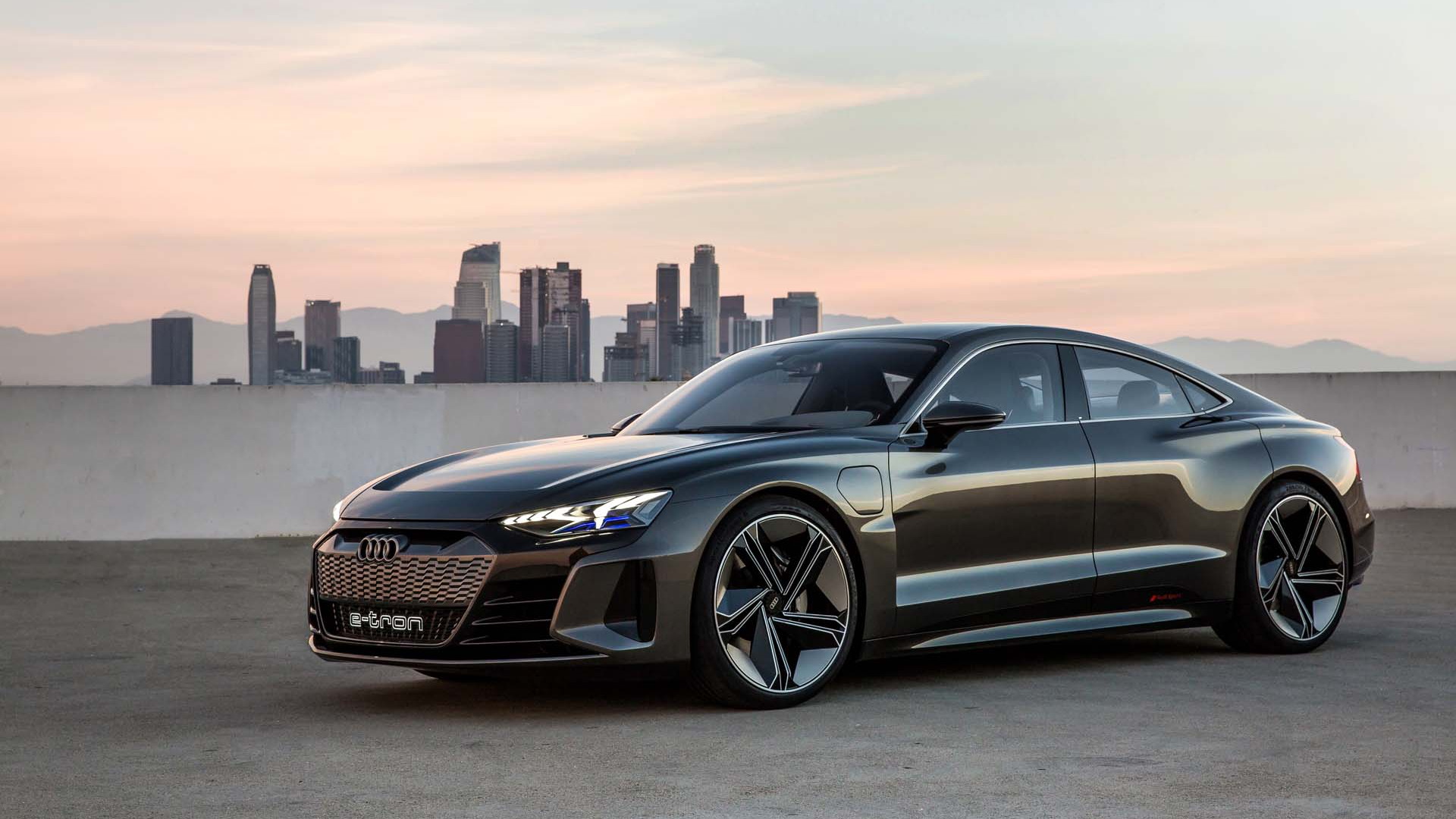 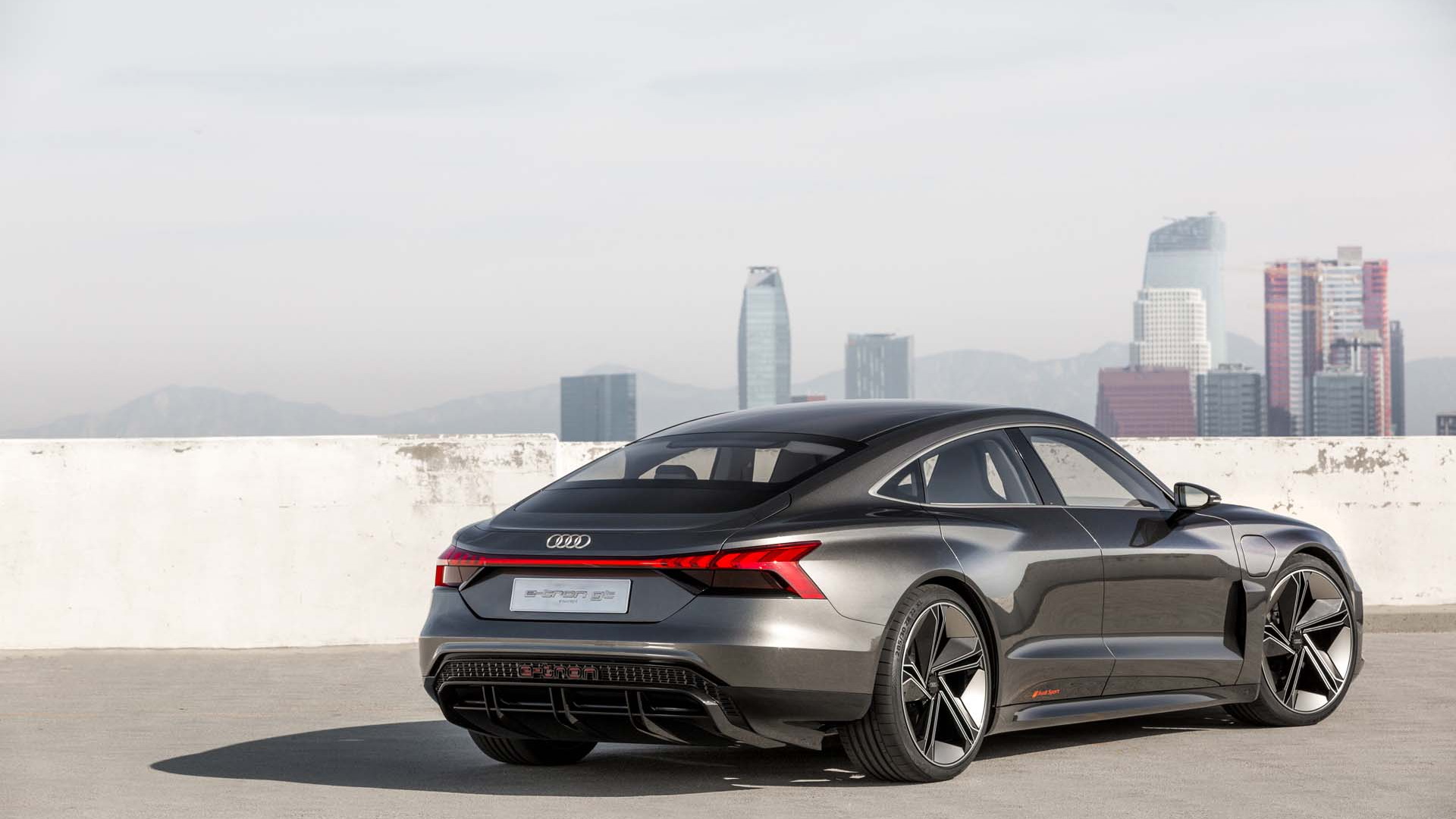 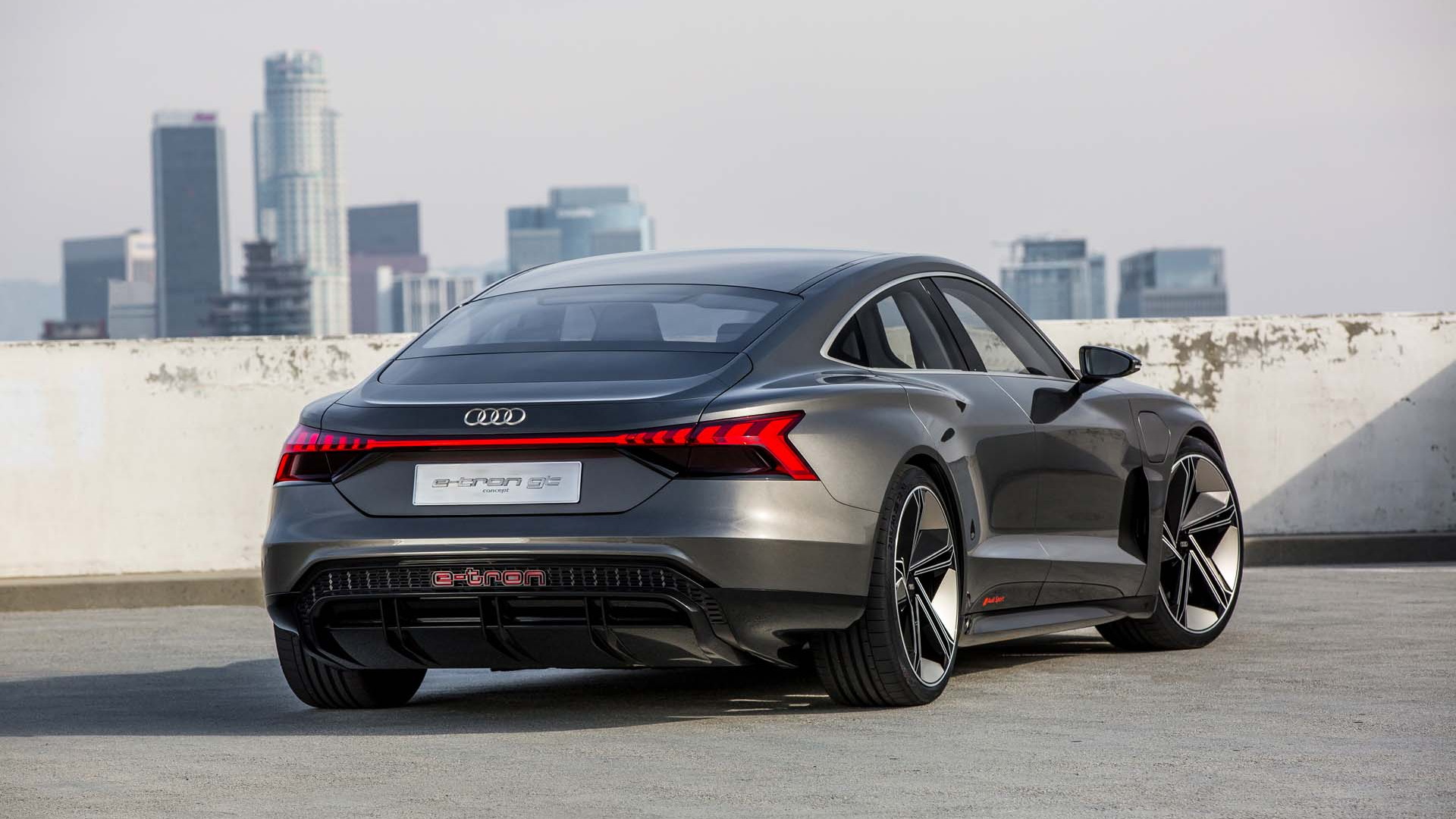 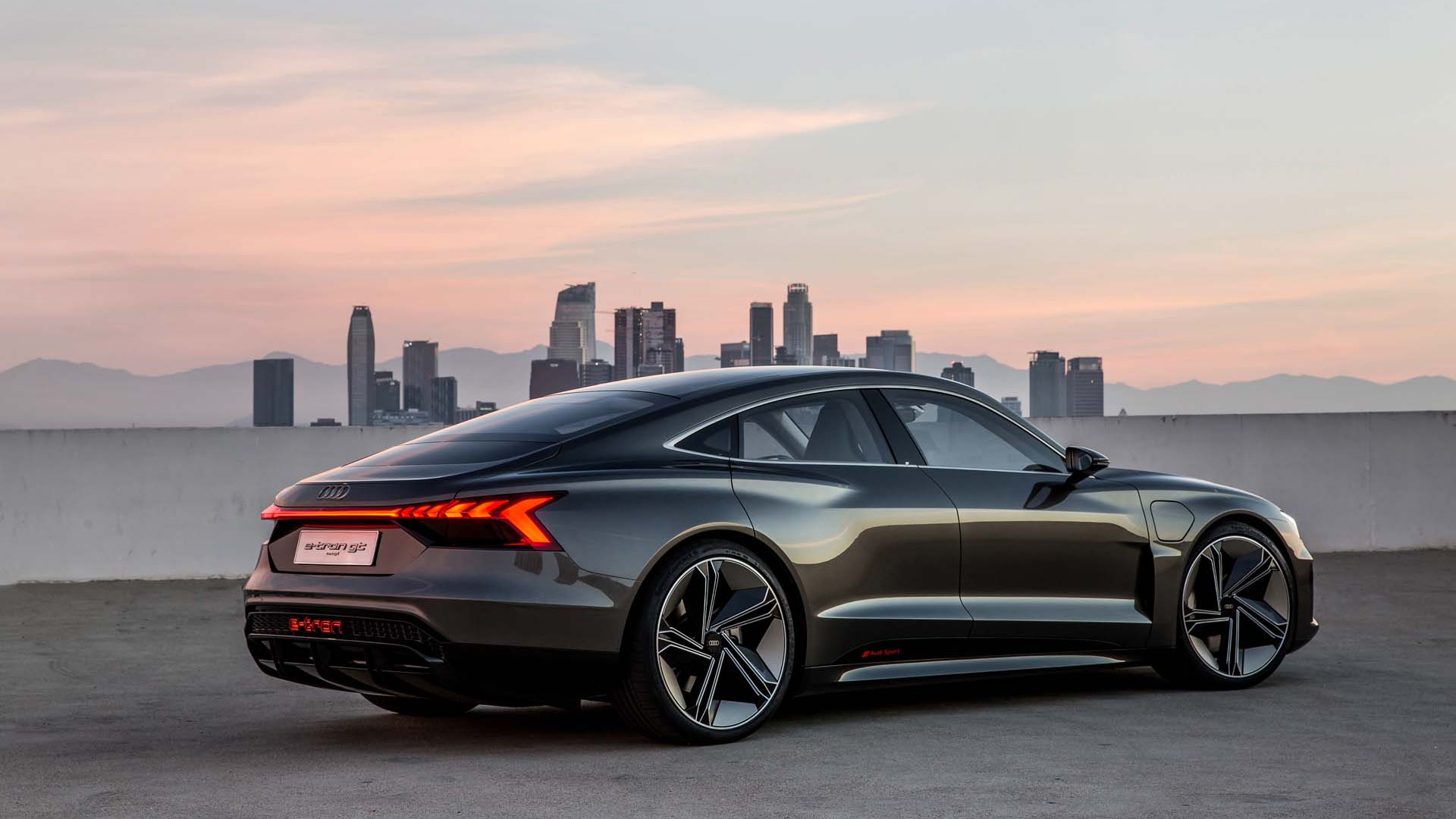 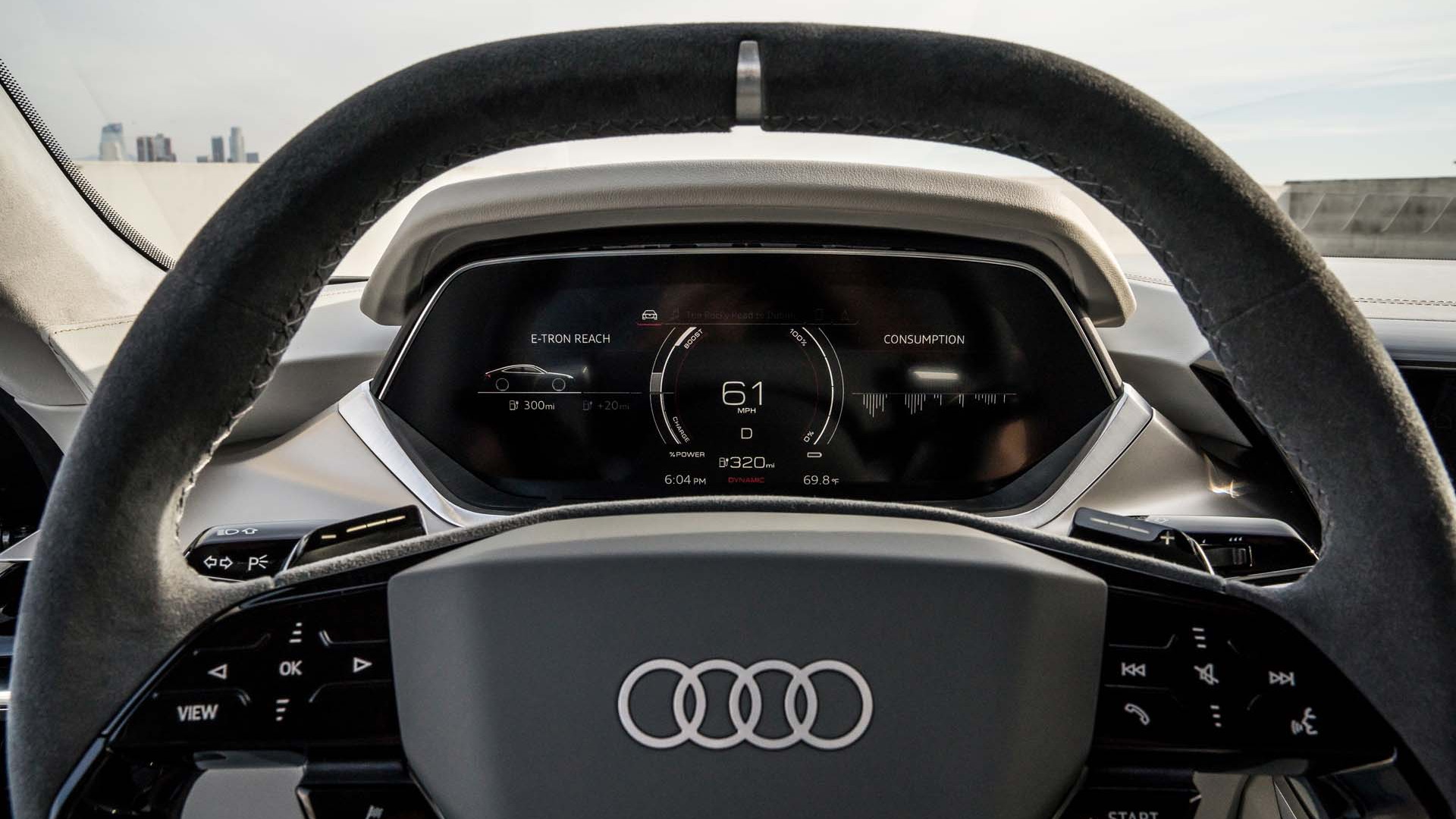 The Audi E-Tron GT four-door electric coupe, due for deliveries to the U.S. starting mid-2021, is far from a mirror image of the Porsche Taycan.

The GT, which was shown in near-production concept form back in 2018, will share its very fast charging and 800-volt architecture, battery technology, and other pieces of its engineering pedigree with the Porsche. But its styling inside and out will be completely different, and we expect the Audi to have its own distinct driving feel.

If that isn’t enough, the Audi is to be produced at a different plant—Böllinger Höfe, which already makes the exclusive R8—and, well, to get down to details, it will sound completely different than the Taycan, the brand assures us.

The Audi team worked on developing its sound for the E-Tron GT did so completely independently, even though they did that piece of the vehicle’s development about the same time as Porsche was doing the same, said Rudolf Halbmeir, one of the acoustics engineers who developed the GT’s song.

“They didn’t know ours, and we didn’t know theirs,” he said, in a webcast for the automotive press earlier this week, outlining some of the inspiration behind it and how it was implemented.

Audi has already used some sound-system wizardry to supplemented the engine sounds in its gasoline performance models—like in the Audi TTS, where it uses a ‘soundaktor’ so it’s not at all surprising that the carmaker spent some extra time and effort making sure its upcoming electric performance touring car, the E-Tron GT, makes the right sound for both the driver and bystanders to take notice.

Halbmeir and another Audi acoustics engineer, Stephan Gsell, designed the “progressive electronic sound” for the E-Tron GT in a sound laboratory, inside the vehicle, and through customer studies, according to Audi. But Halbmeir credits fan noise channeled through a 10-foot, 3-inch-wide plastic pipe as being the foundation for the sound.

That was the start of “a finely balanced sample of 32 sounds,” as Audi put it, including those of a cordless screwdriver and a model helicopter.

They didn’t want something that was too science-fiction, and they didn’t want to overreach. What they ended up sounds a bit like a concession that will help bridge the gap between the expectations of an existing Audi performance-car owner and someone who already knows a bit about electric cars.

“We would have liked to show what we are capable of, but in the end it’s supposed to show the car, from the old world to the new world,” he lamented.

The mix for all those sounds actually changes as you drive, with an algorithm prioritizing certain ones depending on motor speed, load, vehicle speed, and other details.

“When the car is driven slowly, the e-sound is discreet, becoming fuller and more dynamic as speed increases,” explained Audi.

And this all works together with the acoustic vehicle alerting system (AVAS), which includes one speaker at the front of the vehicle, per pending pedestrian noise-making requirements. But customers will be able to add an optional sound package that adds a second, large speaker to the rear of the vehicle; they work in concert with two speakers inside the cabin, at the rear doors.

What you hear in these examples is the sound for Europe. Audi said that the frequencies and volume will vary between Europe and the U.S. Likewise, due to regulations, the sounds will be emitted at up to a higher speed in the U.S.—about 20 mph, versus about 13 mph for Europe.

There are essentially three modes to the system, tied to modes in Audi Drive Select. In the E-Tron GT’s Efficiency mode, the car is silent outside of the pedestrian warning sound. In Comfort mode the rear exterior speaker is added, and sound is supplemented all the way to top speed. In Dynamic mode, exterior sounds play louder, and the cabin sound is added.

However, due to regulations and the range of legal requirements the system has to comply with, Audi said that it opted against offering user-selectable sounds.

Production-model specs and technical details for the E-Tron GT haven’t yet been released, so expect other intriguing details emerging soon.