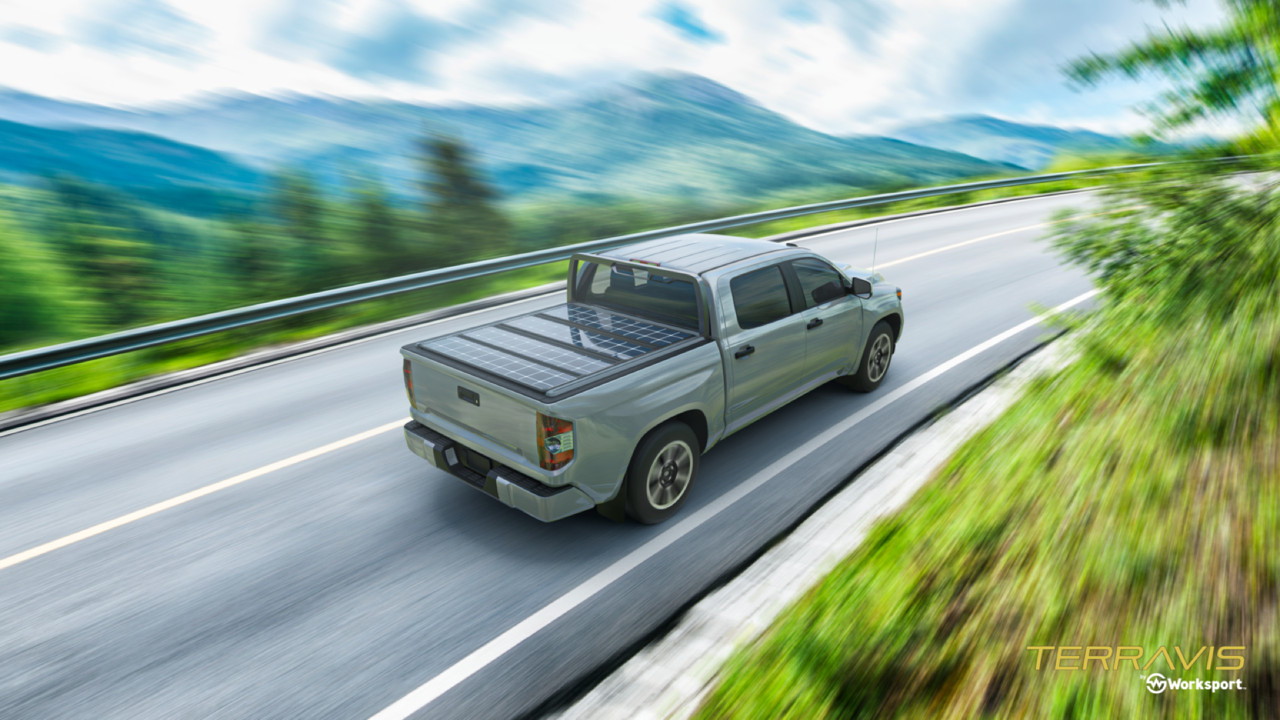 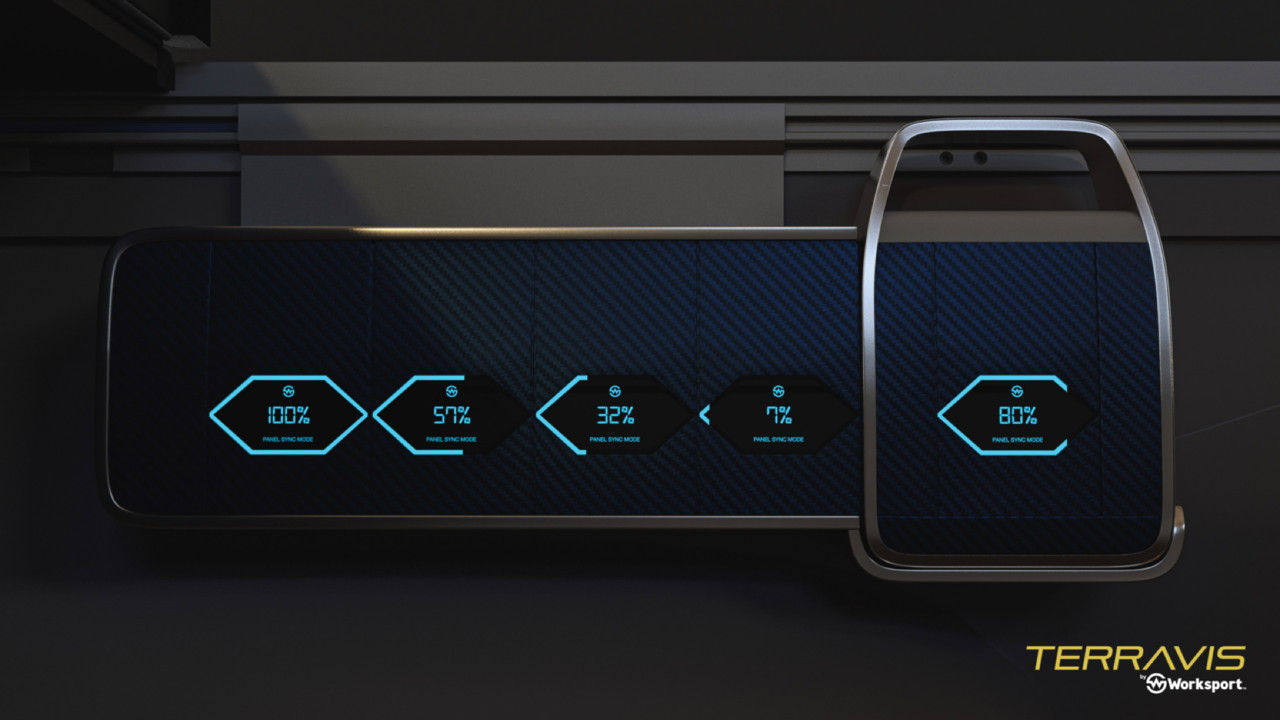 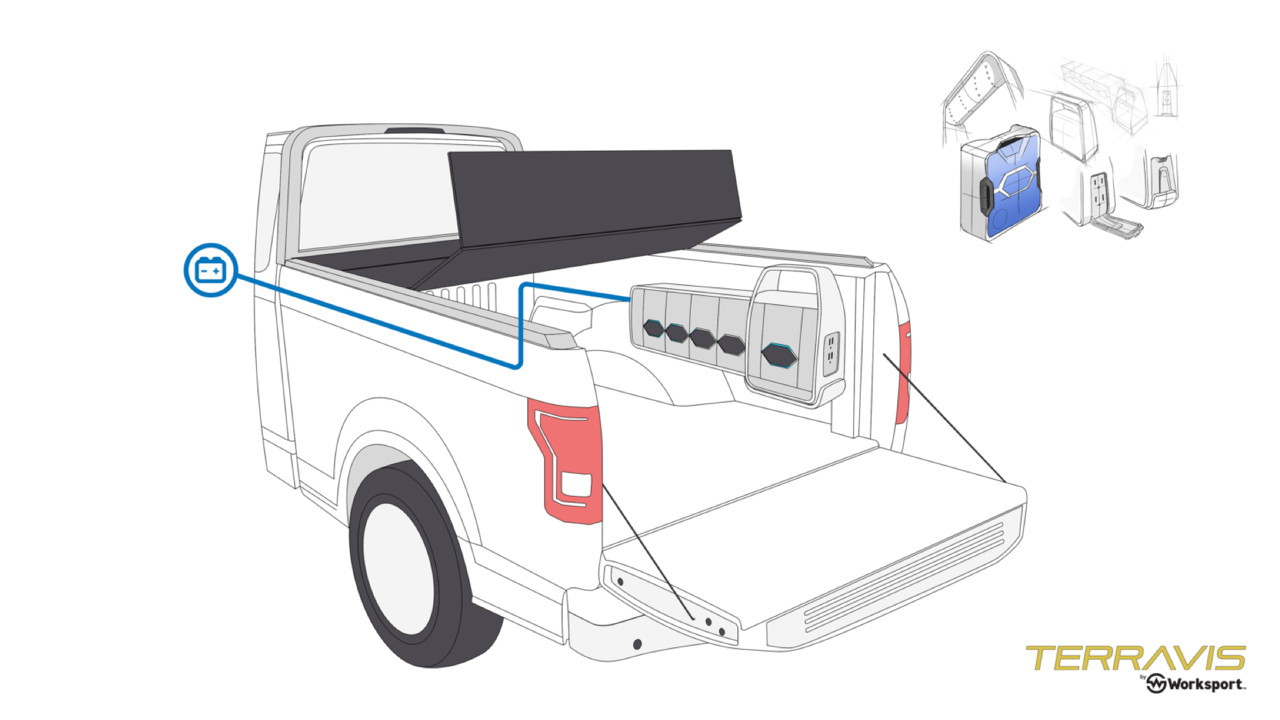 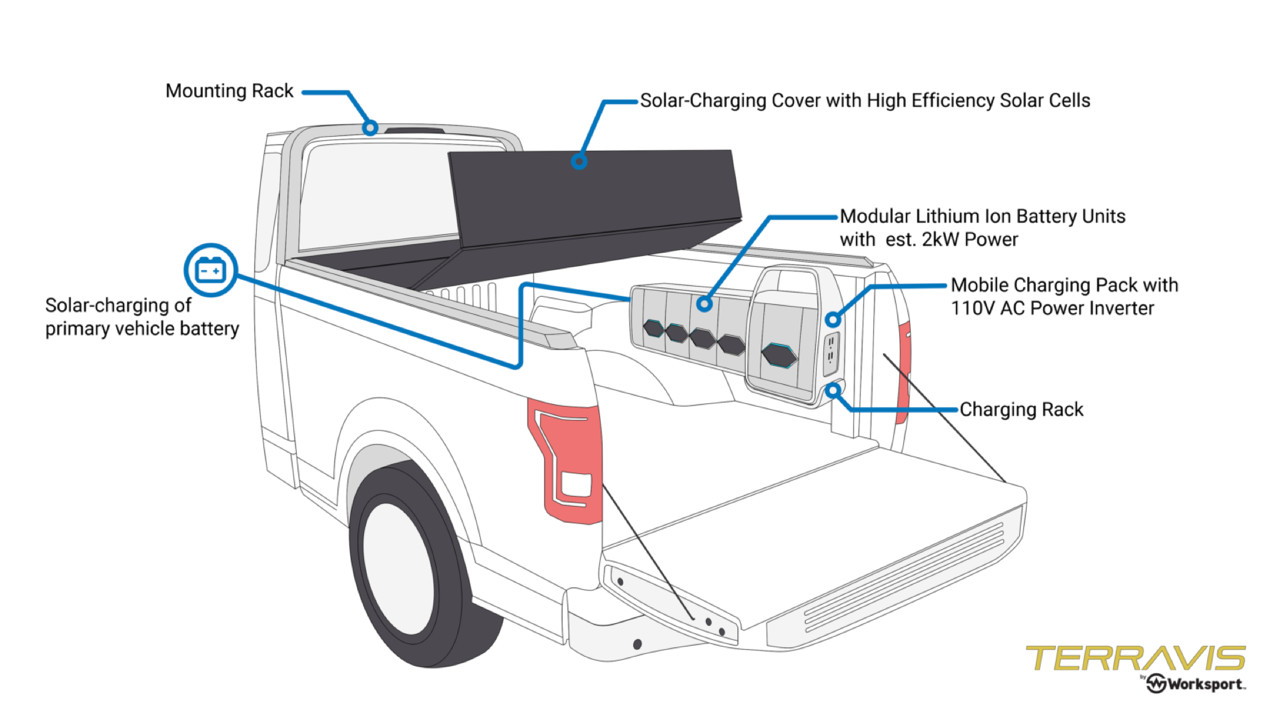 Adding solar panels to tonneau covers seems not only like a natural next step, but a natural complement to the numerous fully electric pickups arriving over the next several years. Worksport’s Terravis aftermarket system for conventional and electric trucks, currently under development and revealed last month in a release and video, aims to do that, plus some nifty mobile-charging features that might appeal well beyond the electric-truck market.

The Terravis system effectively covers two different configurations—one capable of providing meaningful energy for the main traction battery in upcoming electric trucks, plus a portable power bank or, for those looking to retrofit solar into their gasoline truck, just the portable power-bank system.

The system, developed by Ontario, Canada–based Worksport, which has been making tonneau covers for pickups since 2011, allows what it calls incremental bed access—meaning that the four panels are hinged, to permit a progressively wider opening as needed. It uses four monocrystalline panels, held within a high-strength anodized frame, operating at a 22% efficiency. Depending on the truck bed size, that can mean a peak power of 1 kilowatt or more from the panels.

Worksport last month announced that it has partnered with the maker of an electric pickup truck to offer its solar tonneau system as a feature built into every one of the particular automaker’s electric trucks. The “late-stage agreement” between the companies, likely to be announced soon, will result in $70 million of revenue for Worksport.

According to the company, the system for the OEM partner will let the owner choose whether the power from the solar array goes to an in-bed charging system to charge batteries and power accessories, or to the truck’s drive system.

Although the system is such an eco-friendly complement to a fully electric pickup, trucks don’t need to be fully electric to take advantage of such a system. Worksport notes that there are more than 50 million pickups on U.S. roads, and that the system can help provide mobile solar power for camping, job sites, or to help with blackouts—helping avert instances of carbon monoxide poisoning during natural disasters.

Solar tonneau covers aren’t an entirely new idea. Via Motors has offered them in the past, with outputs of up to 800 watts, enabling up to 10 miles of range in those extended-range electric trucks. And recently, other companies have become more creative with solar charging—with a solar car cover, for instance.

The accessory-based mobile-charging side of the system includes a detachable 120V AC power inverter with a total output of 4 kw including two 2 kw outlets. It will have its own 1-kwh battery pack, plus a “power rail” charging rack with the potential to swap in several modular lithium-ion batteries with about 2 kwh each.

The company says that it is also considering LFP batteries in addition to standard lithium-ion and will use whichever tech fits the task best.

Worksport says that it’s seeking more investment capital for the idea but planning to make a TerraVis model for each of the upcoming electric trucks expected for the U.S. market, such as the GMC-Hummer pickup, the Ford F-150 Electric, the Rivian R1T, the Tesla Cybertruck, the Lordstown Endurance, the Bollinger B2, and others.

The aftermarket version of the system will be available in mid-to-late 2021.