The rate of transactions at a station, known in the industry as "throughput," remains one of the major advantages for gas stations over their hydrogen counterparts. In addition to being more numerous, gas stations tend to have more pumps, meaning they can handle more vehicles at once.

While large-scale hydrogen fueling sites are likely still a long way off, Air Liquide's dual-dispenser setup should be able to provide faster fill-ups at existing sites.

The key difference is that this station has two connectors that are capable of filling at 700 bar, according to an Air Liquide press release, as opposed to the common setup of one nozzle at 700 bar, and one at 350 bar.

Air Liquide said the station holds more hydrogen as well, with a smaller footprint. The station is capable of filling 250 vehicles per tank of hydrogen—a big step up in capability from the 30-50 vehicles most existing stations can support.

This new pump design itself could help get more cars fueled up during busy times, like holiday weekends. The real issue, however, is the need for more stations. 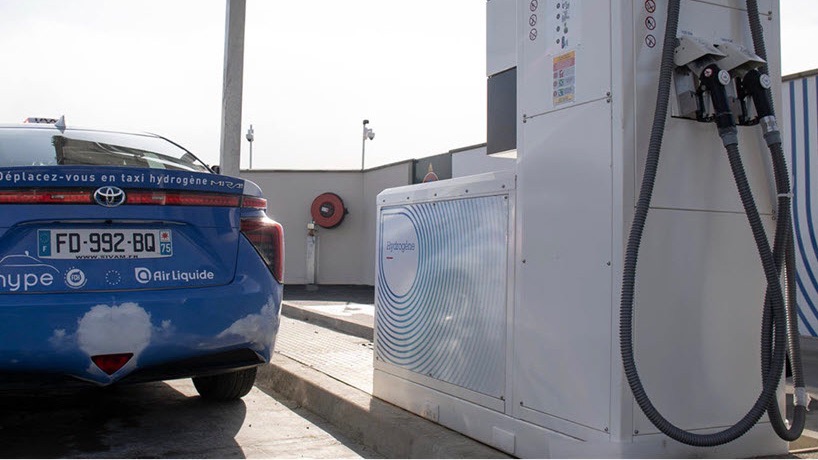 According to the federal Alternative Fuels Data Center, there are 42 publicly accessible hydrogen stations in the U.S. These stations are mostly concentrated in California, which means sales of the three fuel-cell models currently in production—the Honda Clarity Fuel Cell, Hyundai Nexo, and Toyota Mirai—are also limited to that state.

Air Liquide claims to have five operating stations in the Northeast: two in Massachusetts, and one each in New York, Connecticut, and Rhode Island. All at this time are fleet-oriented, but Air Liquide has told Green Car Reports that it will open stations for public use "as demand dictates."

In California, a hydrogen shortage kept hundreds of fuel-cell vehicles parked for several months last year. That had nothing to do with the number of dispensers at each station, or station throughput.

Fuel-cell vehicles keep getting better but the hydrogen shortage showed that the infrastructure hasn't yet arrived for passenger cars.

That (at least in part) seems to have recently shaken the faith of at least one automaker. Mercedes-Benz recently cancelled its fuel-cell development for passenger vehicles altogether, but parent Daimler will continue working on fuel-cell commercial trucks. Because they tend to operate on set routes out of designated terminals, commercial vehicles present less of an infrastructure problem than passenger cars.