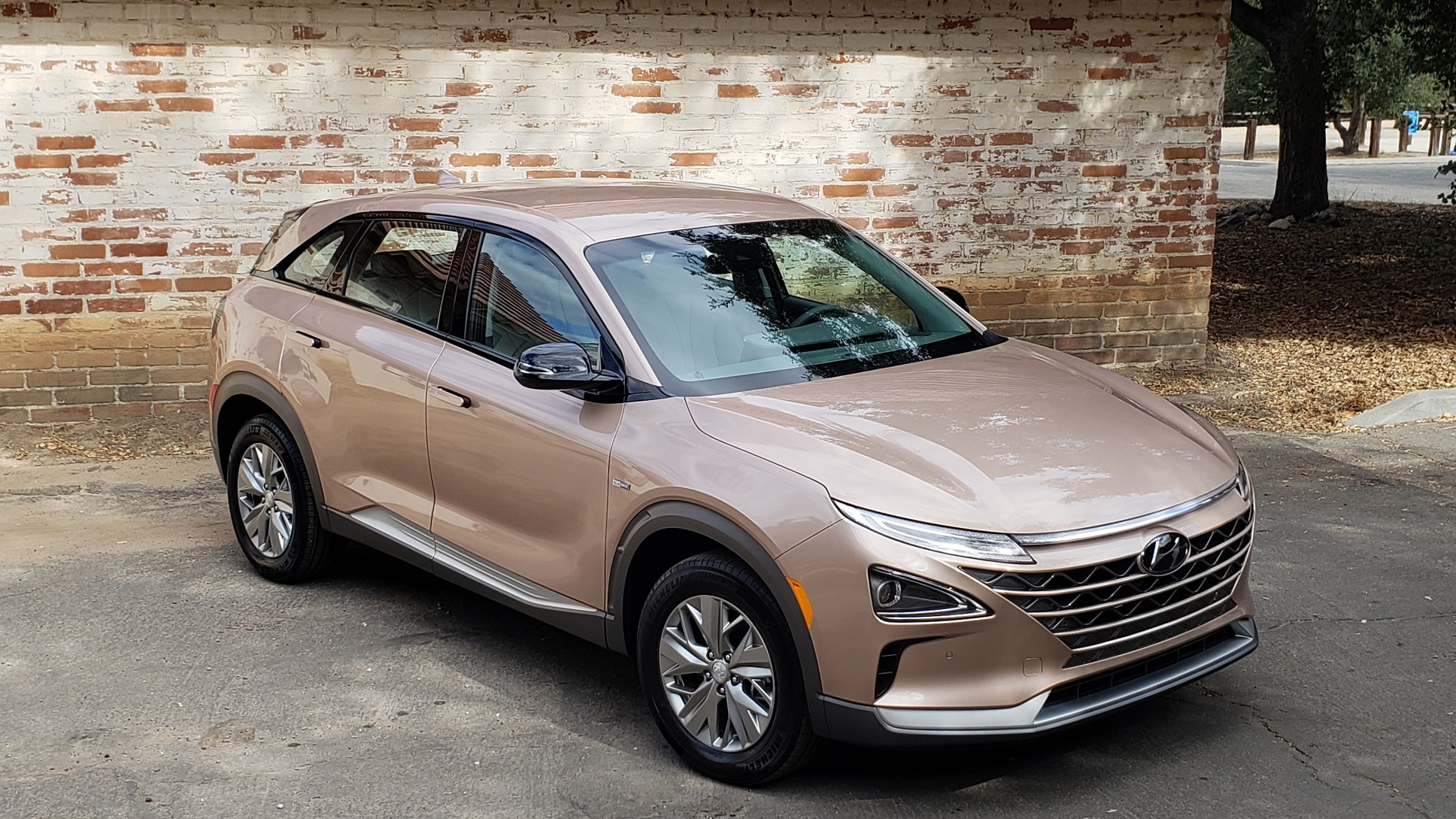 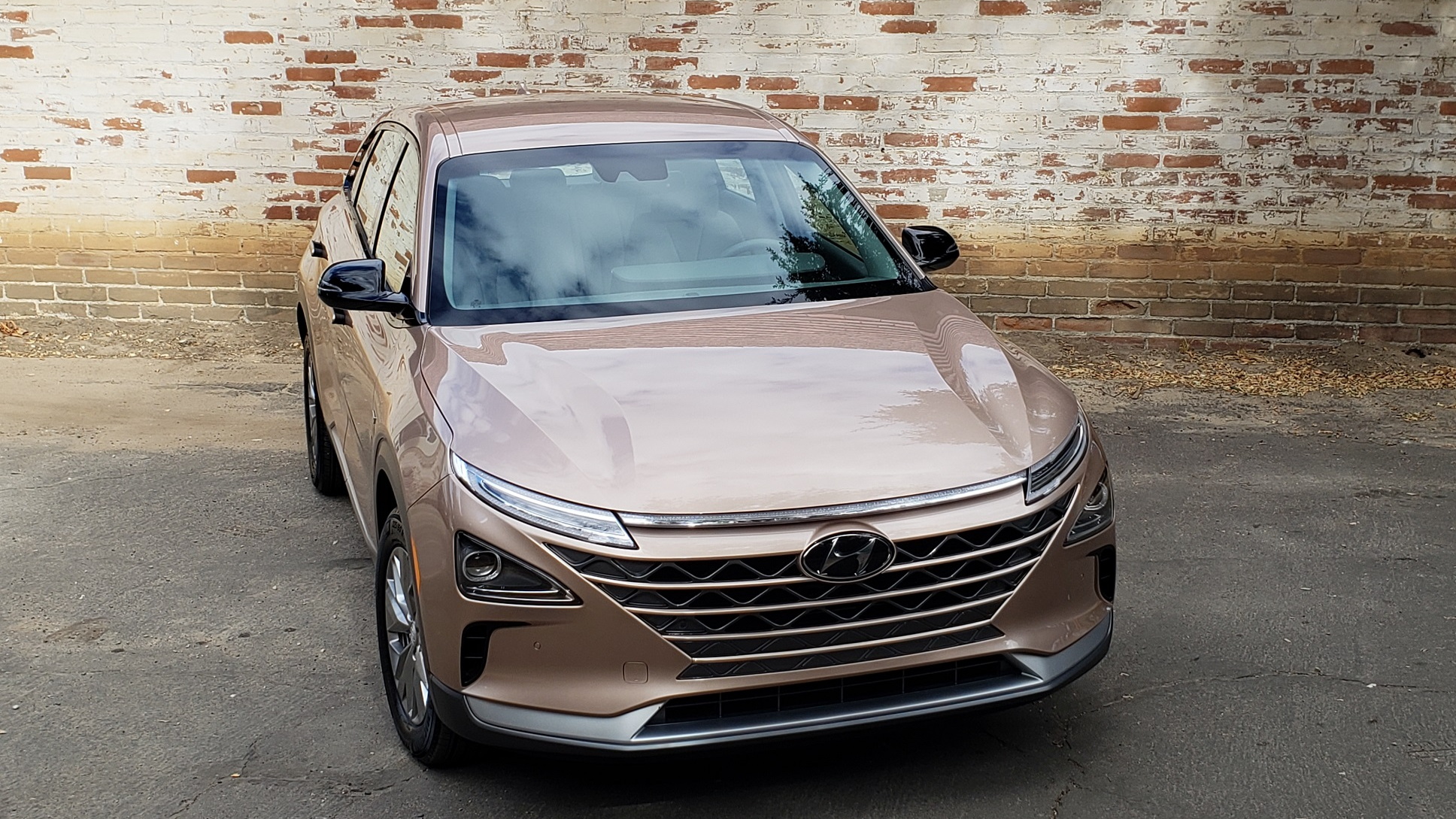 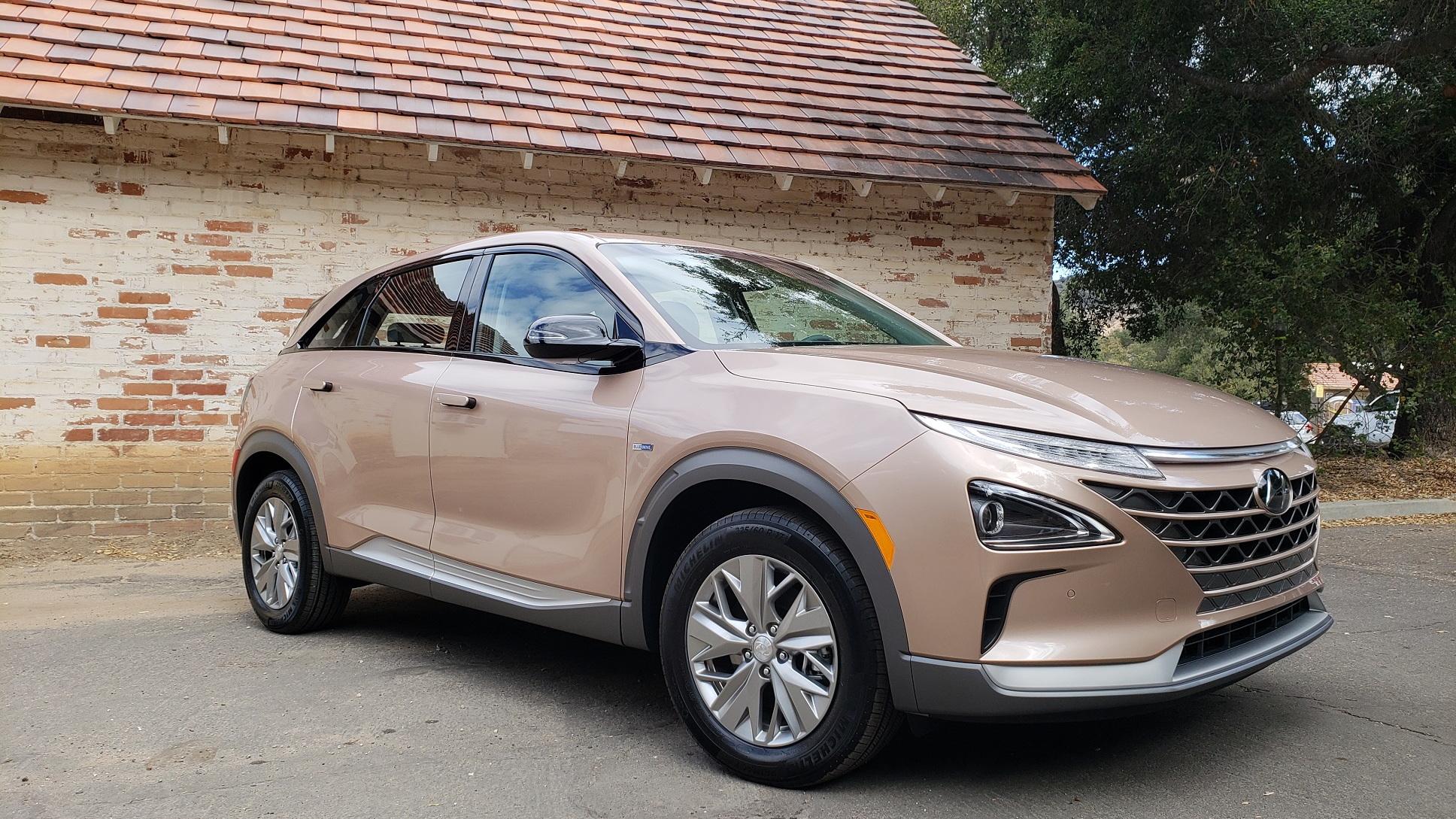 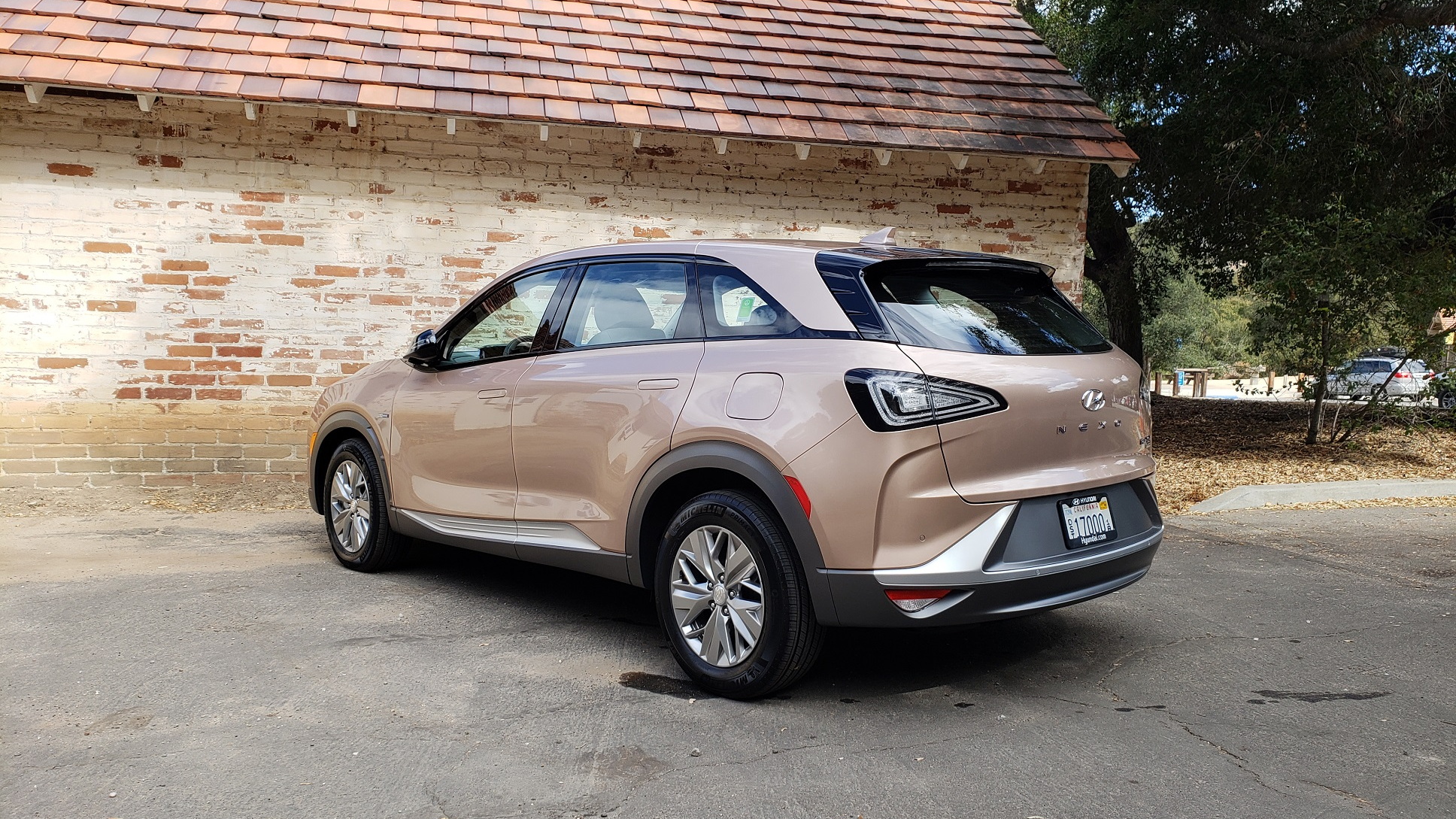 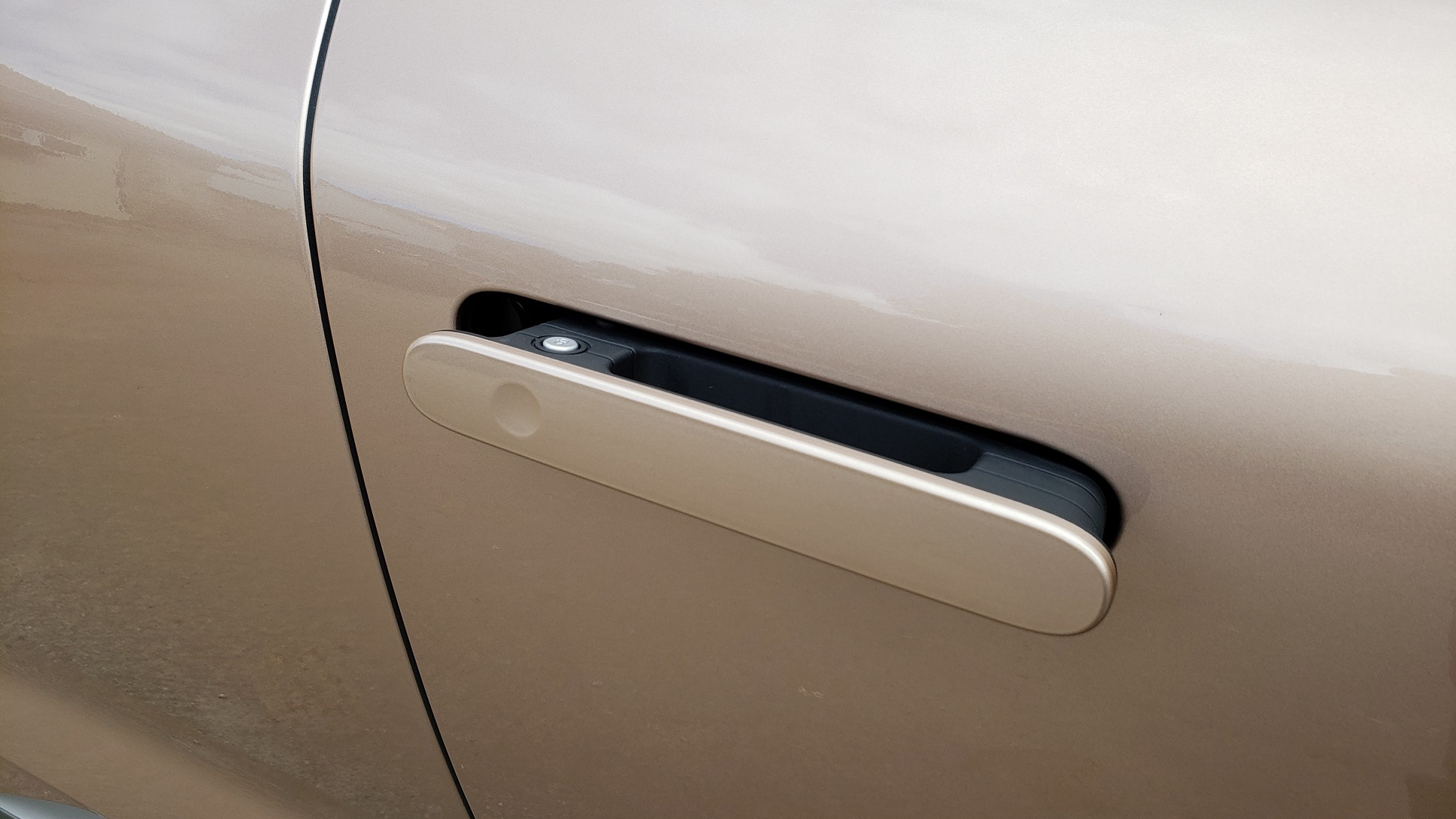 Pretty much any story on a new vehicle these days notes that new-car buyers are snapping up utility vehicles, while traditional sedans languish on sales lots.

That puts Hyundai right on trend with its latest hydrogen-powered entry, the Nexo, which it dubs a crossover utility vehicle. It succeeds the earlier Hyundai Tucson Fuel Cell, also a crossover, of which roughly 200 were leased in Southern California over three years.

The Nexo gives Hyundai a pair of distinctions: It’s the only hydrogen-powered utility on the market, and its EPA-rated range comes in at 380 miles combined from the 6.3 kg of compressed hydrogen it carries in three tanks. That’s higher than the 366 miles of the Honda Clarity Fuel Cell, the previous range champ among hydrogen vehicles, as well as the 312 miles of the Toyota Mirai.

DON'T MISS: This one 11-year-old chart explains the problem with hydrogen fuel-cell vehicles

Not a ‘science experiment’

The 2019 Hyundai Nexo has the upright lines and cargo hatch of a utility, though it lacks the ground clearance and all-wheel-drive option many buyers will expect. In size, it’s a compact crossover roughly the size of the old Tuscon, but its smooth lines and broad-shouldered presence make it look larger and more substantial than the gasoline counterpart.

Hyundai’s designers have done a good job in giving the Nexo a “normal” appearance. At the launch event and drive held last week in Los Angeles, executives repeated the company’s belief that its fuel-cell vehicles should not look like a “science experiment.”

CHECK OUT: A Tesla Model S that runs on hydrogen fuel cells?

Only the front end indicates that the Nexo may be powered by something other than a gasoline engine. Its diagonal pattern of cross-hatching pierces the otherwise smooth and rounded nose. And the body overall lacks the exaggerated wheel arches, vents, inlets, and off-road allusions now found in many otherwise conventional suburban utilities.

Inside, the cabin of even the base Nexo Blue can come with light-colored fabrics (some made of recycled materials) with subtly contrasting accents and a seat perforation pattern unlike any other car’s.

A center 12.3-inch touchscreen floats above the horizontal dash, within the same horizontal housing as the digital instrument display behind the steering wheel—a very similar setup to that being rolled out by Mercedes-Benz on its latest models.

Virtually all controls sit in a grid of silver buttons on a wide, rectilinear, almost horizontal console that contrasts oddly with the gentle curves of the rest of the interior.

Seats are comfortable and supportive, and there’s enough head- and legroom in the back for 6-foot riders to sit behind each other.

Hyundai has researched fuel-cell powertrains since 1998, and put its first hydrogen-powered prototype on the road back in 2000. Following the Tucson Fuel Cell, the Nexo’s second-generation powertrain is more compact, more powerful, more efficient, operates across a much wider temperature range, and will likely last longer.

Specifically, the Nexo’s fuel-cell stack operates at up to 60 percent efficiency, meaning that proportion of the energy contained in its hydrogen fuel is converted to electricity. The Tucson’s maximum was 55 percent. Cold starts are possible from as low as -22 degrees C (- 8 deg F).

Output of the fuel-cell stack fell slightly, to 95 kw from the previous 100 kw. But for transient power demands, the lithium-ion battery pack delivers up to 40 kilowatts, fully two-thirds higher, enough to power an electric motor with 20 percent higher output, at 120 kw (161 horsepower).

That’s not particularly high for a heavy-ish crossover. But the Nexo did fine around town, with relatively aggressive power tip-in up to 30 mph, and it acquitted itself adequately in fast LA freeway traffic. That’s an area in which the Tucson Fuel Cell was far too slow, almost dangerously so.

Hyundai suggested a 0-to-60-mph acceleration of 9.2 seconds; that meant the Nexo felt adequate, though not particularly lively above 40 mph. Its sedate performance was unfortunately highlighted by the company’s other new zero-emission vehicle, the Kona Electric, which we drove the same day as the Nexo. The 0-to-60 time for that all-electric small hatchback was 7.6 seconds, and it was definitely lively.

Could the Nexo be provided with the same acceleration as the 258-mile Kona Electric? We posted the question to Dr. Bo Ki Hong, a fuel-cell research fellow at Hyundai’s R&D group. He smiled, perhaps wistfully, and suggested that such performance might be challenging to achieve.

Remarkably, the Nexo has the best combination of ride and handling among the three current fuel-cell contenders. It’s neither tall nor tippy as some crossovers can be, and while its tires don’t have a ton of grip, the steering is direct and the car remained well-behaved through the twists and turns of Topanga Canyon Road.

By comparison, the Mirai feels remote and numb from the wheel, while the Clarity Fuel Cell’s soft, smooth ride comes at the expense of handling and roadholding. Indeed, the Nexo was fully the equal of the current gasoline Tucson—if not perhaps quite as good as the best-handling compact crossovers, which we’d peg as the Mazda CX-5 and perhaps the Volkswagen Tiguan.

The Nexo is remarkably quiet on the road, with less wind and tire noise evident in the cabin than we had expected. Hyundai focused intently on reducing noise and vibration, it said, fitting triple-layer noise-reducing glass not only for the windscreen but also the front side windows.

All the better to hear the high-end stereo option, a seven-speaker, 315-watt Infinity Harman system with ClariFi technology to restore signal lost to digital compression.

While some suspension and electrical components are shared with other Hyundai vehicles, the company says the Nexo’s platform and underpinnings are unique to the fuel-cell vehicle.

The three transverse hydrogen tanks—two under the rear seat, one under the load bay, along with the 1.56-kilowatt-hour battery pack—give the Nexo a lower cargo floor than that of the Tucson Fuel Cell.

While the Nexo’s load deck is an inch or two higher than other compact crossovers, it’s not particularly noticeable. Cargo volume is 29.6 cubic feet (just slightly less than the 31 cubic feet of the current gasoline Tucson). That’s double the Mirai’s trunk volume, and almost triple that of the Clarity Fuel Cell.

The Nexo’s two trim levels differ considerably in features, options, and even range. The base Nexo Blue is rated at 380 miles, while the higher-spec Nexo Limited is more than 2 tons, cutting its rating to 354 miles.

Its efficiency rating falls as well, from the Blue’s 61 MPGe to 57 MPGe in the Limited. (Miles Per Gallon Equivalent, or MPGe, is a measure of how far a vehicle can travel on the amount of energy contained in 1 gallon of gasoline.) On a 40-mile drive through urban traffic, some freeway, and the twisty canyon road, the trip computer calculated an efficiency of 57.3 MPGe.

Still, as Hyundai’s technology flagship, the Nexo Limited offers features not found on any other Hyundai.

The flashiest of these may be its Remote Self Parking Assist, in which the car can be directed to park itself not only with the driver behind the wheel but also remotely via the key fob, as long as the driver stands within 2 meters (about 6 feet) of the car.

Pressing a button in the console alerts the Nexo to start looking for parking places, both parallel and perpendicular. It will parallel-park itself, or back into perpendicular spaces—the general practice in Asian countries—though it won’t do nose-in perpendicular parking or self-park in angled spaces.

Hyundai has not yet released pricing for the Nexo, nor has it said when the fuel-cell SUV will arrive at California dealers.

That state now has 35 operating hydrogen fueling stations, and is expected to have 59 open by the start of 2020. That’s considerably fewer than the 100 planned for 2020 back in 2013, but it will allow 10,000 or more fuel-cell vehicles to be filled up as required.

As of September 30, just over 4,000 Toyota Mirais and roughly 1,100 Honda Clarity Fuel Cells had been delivered in California—the only state in which hydrogen fuel is commercially available. By comparison, battery-electric and plug-in hybrid vehicle sales over the last 10 years have now crossed the 1-million mark.

It seems safe to dub the 2019 Hyundai Nexo the best of the three hydrogen-powered vehicles now on sale in California. It wins on looks over the bizarre Toyota Mirai and the pudgy, awkward Honda Clarity, as well as for its top range and enjoyable driving feel.

That said, being the best of an esoteric and low-volume vehicle segment is a somewhat muted honor. With electric-car sales surging due to the arrival of the Tesla Model 3, the balance of electric to hydrogen sales within the still unprofitable field of zero-emission vehicles has become even more lopsided.

For buyers who want a crossover with no tailpipe emissions directly from the vehicle itself (except water), the Nexo will fit the bill if AWD isn’t a requirement. But it’s sold only in a single state, its range is limited by the sparse fueling infrastructure, and we expect total deliveries only in the low thousands over the Nexo’s lifetime. It’s not a crossover you can drive across the U.S.

We never had any doubt that the world’s largest carmakers could deliver appealing, modern, capable vehicles running on hydrogen. The 2019 Hyundai Nexo raises the stakes in that game, leaving Toyota and Honda with some work to do to catch up on range and design.

As always, the key to the long-term viability of hydrogen fuel-cell cars isn’t the vehicles themselves, but the infrastructure that has to be created from scratch to keep them fueled. For the U.S. overall, that remains a very open question.