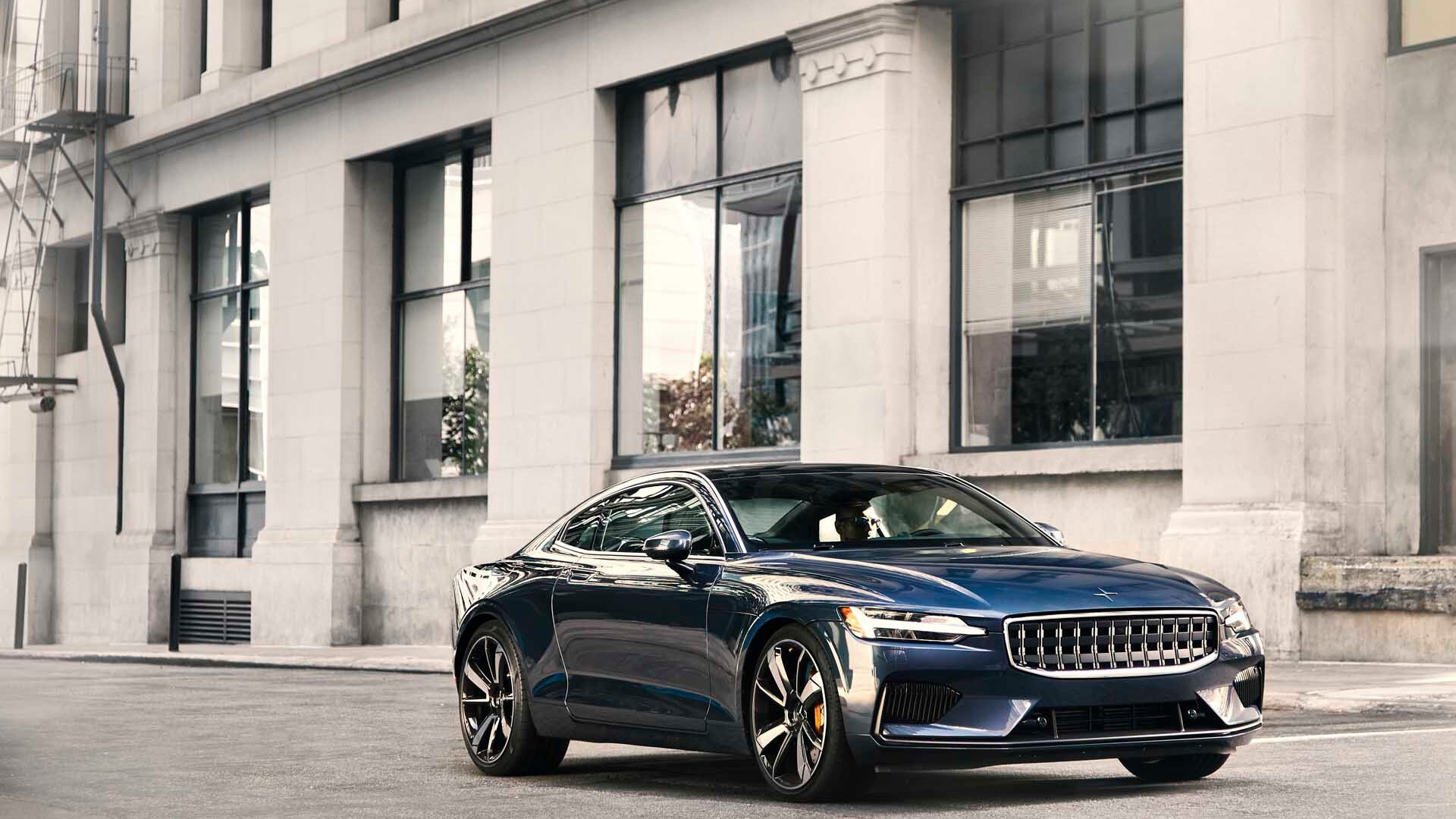 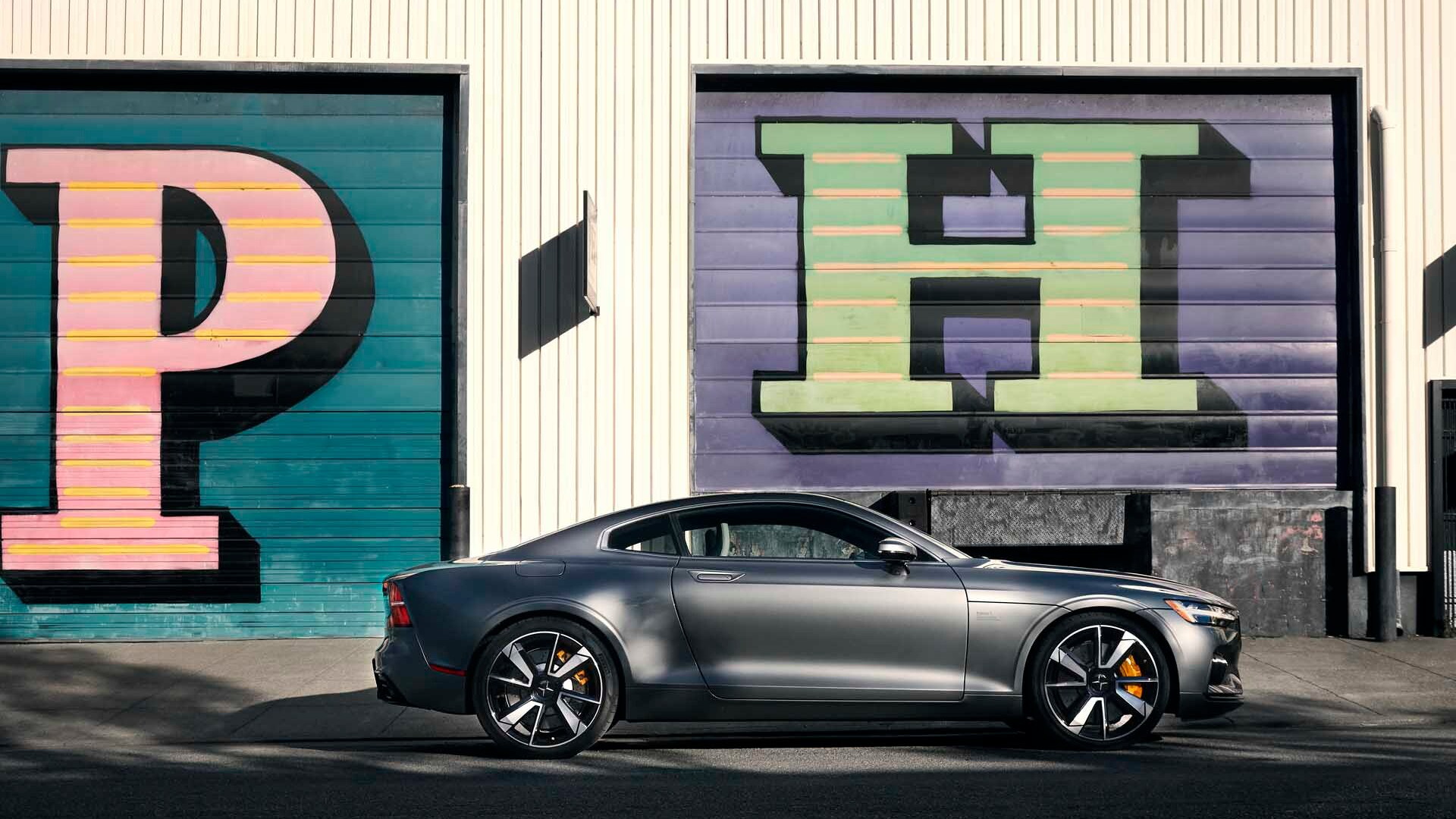 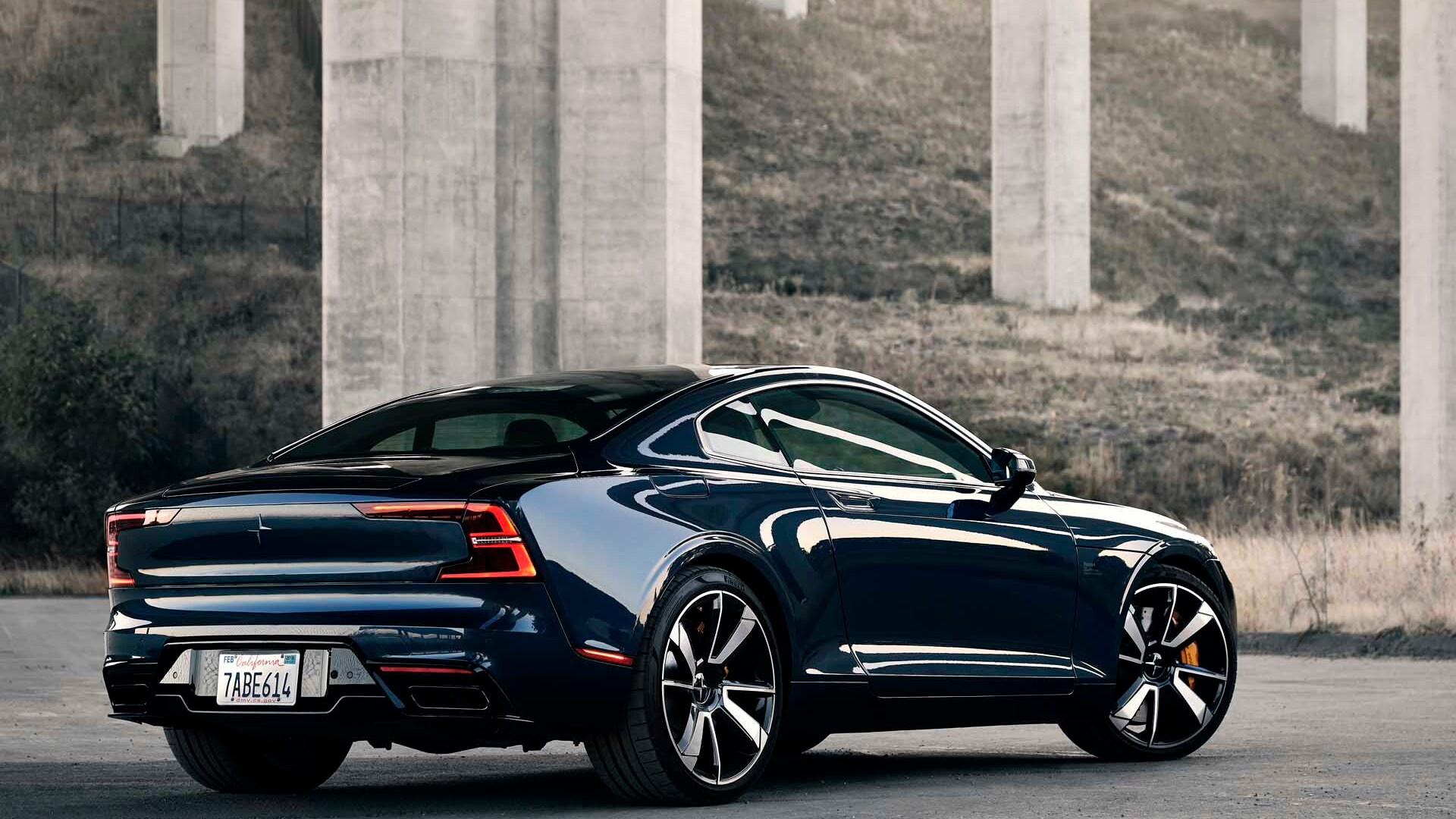 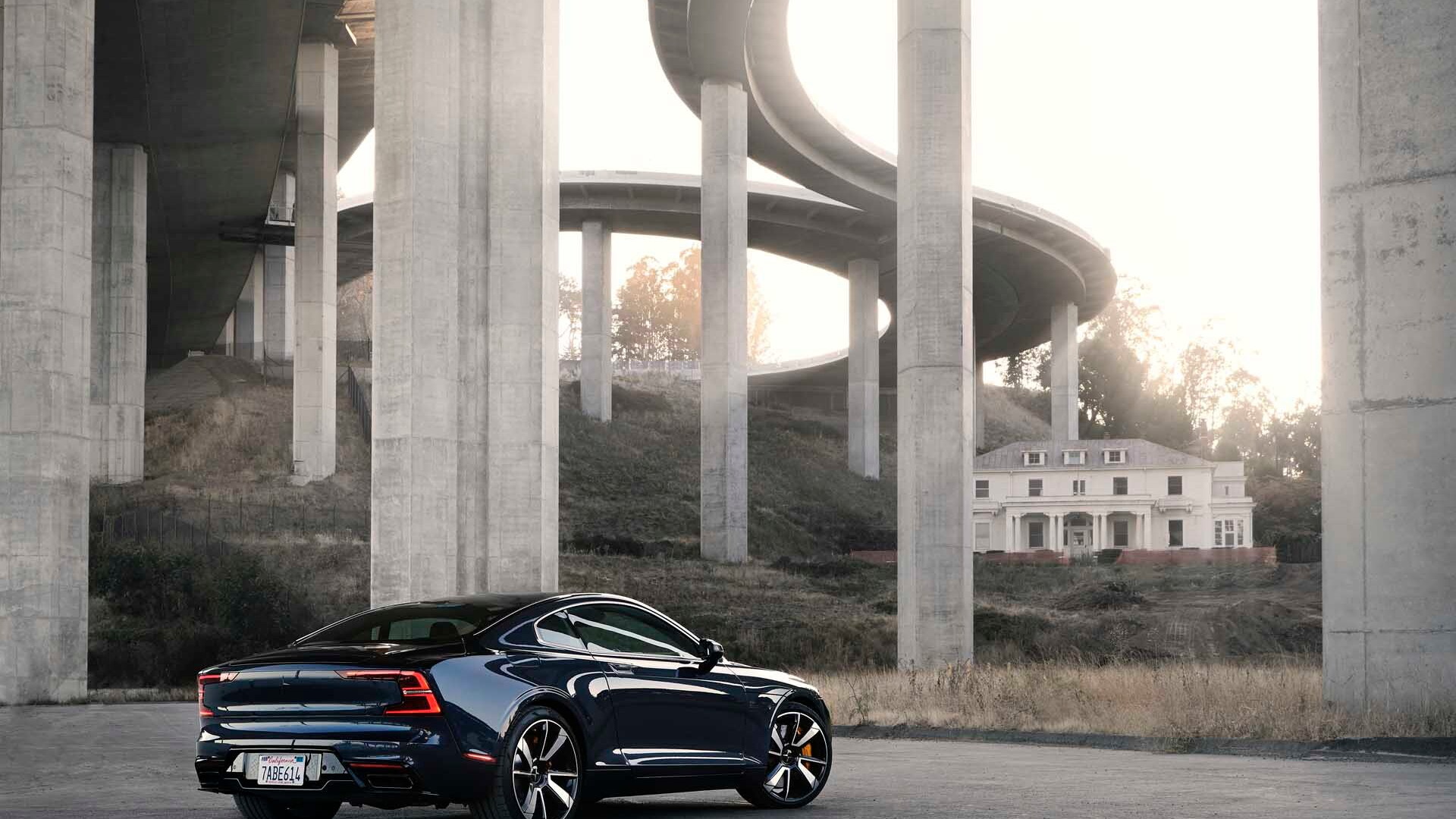 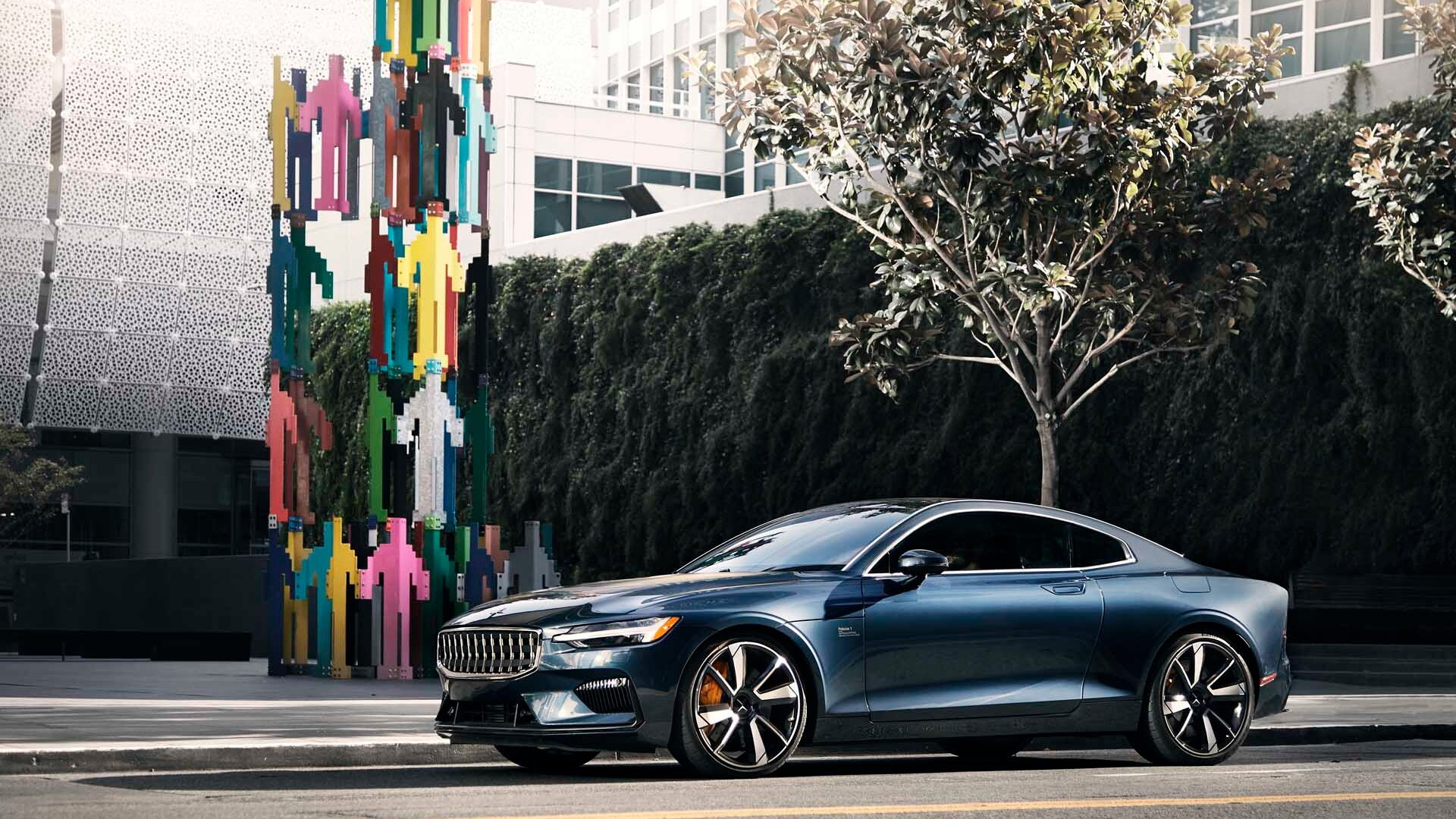 Electrified performance? Been there. Done that.

As the literal and very appropriately named first car from Polestar—a new carmaker jointly owned by Volvo and Geely—the “1” has more promises to keep than being just the first Polestar. Even that’s too parochial for true EV believers.

After driving it, we’d emphasize the word: party.

That’s because the two electric motors that help power the Polestar 1 are plunked onto the same rear axle. Engineers at Polestar used twin 113-hp electric motors at the rear to power the 1 for up to 69 miles, based on the WLTP cycle. The motors are powered by a 400-volt, 34-kwh lithium-ion battery pack supplied by LG Chem, which is stored along the car’s transmission tunnel and stacked along the bulkhead of the trunk. The vertically arranged pouches cut deeply into the usable trunk space—only 4.4 cubic feet remain, which is about enough for two soft-sided, small duffel bags. As a whole, the pack is about three times larger than those found in plug-in hybrid Volvos.

The motors drive a 1:6 planetary gearset at each wheel and can power the car alone at speeds up to nearly 100 mph.

Wired? The motors work together like PB&J and deliver true torque vectoring in a way that’s stickier than jam side down on a hot day. According to Polestar engineers, driving the torque split between each wheel was among the toughest tasks for the new coupe. (Eds note: Who was on the naming committee? Seems like a cush gig.)

Work started on the Polestar 1 in 2015 and Bjornesson joined the team in April 2016. To have a new car from a new brand built and on the road in roughly 4 years with a project manager of just 3 years isn’t just fast by normal circumstances—it’s almost unheard of.

And in some ways, the Polestar 1 feels like it from behind the wheel.

Although the Polestar 1 wears a completely new badge, new VIN code, and only shares 50% of its parts from Volvo, it’s unmistakably related to its parent.

The Polestar 1 rides atop a platform that it shares with the Volvo S90, adapted for use in the new two-door coupe. The Polestar 1 has been shortened by 7.9 inches between the hubs and uses a carbon fiber “dragonfly” brace to reinforce the floor.

The Polestar 1’s body is nearly all carbon fiber (only the bumpers are plastic) with a beautiful grand-touring shape that turns heads. The interior? Straight out of a $50,000 sedan, complete with functional—but aged—Volvo Sensus touchscreen and the same menu system.

Even the gear shifter, which is a beautiful Orrefors crystal gear shifter that’s unique to Polestar, requires a double-tap from Park, through Neutral, to Drive—and back again to Reverse. It’s hardly enough to cause significant frustration, but just enough to remind Polestar 1 buyers that their $155,000 grand-touring machine has plenty in common with a car that costs three times less.

Once away, the Polestar 1’s drive is unmistakable.

The turbocharged and supercharged 2.0-liter inline-4 up front drives only the front wheels and shifts through an 8-speed automatic transmission that's competent but sometimes confused with poor shift logic and slow-speed judders.

The rear wheels, which are driven solely by the twin electric motors and can never clutch in to the internal combustion engine, operate in a complicated dance that’s nearly unbelievable and always entertaining.

The rear wheels never sleep in any of the Polestar 1’s four drive modes—Pure (all-electric), Hybrid (a through-the-road hybrid setup, similar to the Acura NSX), Power (more power is sent to the rear wheels), and AWD (a 50/50 torque split for wet weather traction)—but come alive in Power mode.

Over 200 miles, spent winding through Northern California roads near Woodside, the Polestar 1 begged for tighter and ever faster corners. Pushing extra-legal speeds around hairpins wasn’t only easy, it also felt mandatory—there’s seemingly no limit to the end of its grip. Shod with sticky Pirelli P Zero tires, the Polestar 1’s engineering feat is seamless and beautifully rendered, true torque vectoring. The only kind that can come from electrification, and one that’s well on the way from Tesla and other EV makers.

While torque vectoring will get plenty of well-earned praise, it’s only through suspension engineering and Rydholm’s hard work with the Polestar 1’s Ohlins adjustable dampers that it becomes truly approachable. The chassis is firm and stiff, with a confident ride that could easily be unyielding if the dampers didn’t cushion some of the road’s imperfections. The Ohlins are completely adjustable—they come from the factory with nine clicks dialed into the front and 10 in the rear—and adaptable for any buyer.

And that’s precisely the Polestar 1’s conundrum. It serves many masters: The Polestar 1 is a halo car for a nascent brand banking on electric vehicles with performance potential. The Polestar 1 also compromises with an engine up front, borrowed interior inside, and mismatched mission.

The million-dollar body and million-dollar rear axle take on the world with a $50,000 interior. The Polestar 1 breaks new ground by showing that EVs are not only the preferred powertrain for performance brands because of their acceleration but also because they can shift power side to side like few automakers can dream.

Straight-line speed? That’s been done. Match that speed in the corners? Now there’s a first.

Polestar provided travel and lodging to Internet Brands Automotive to bring you this firsthand report.