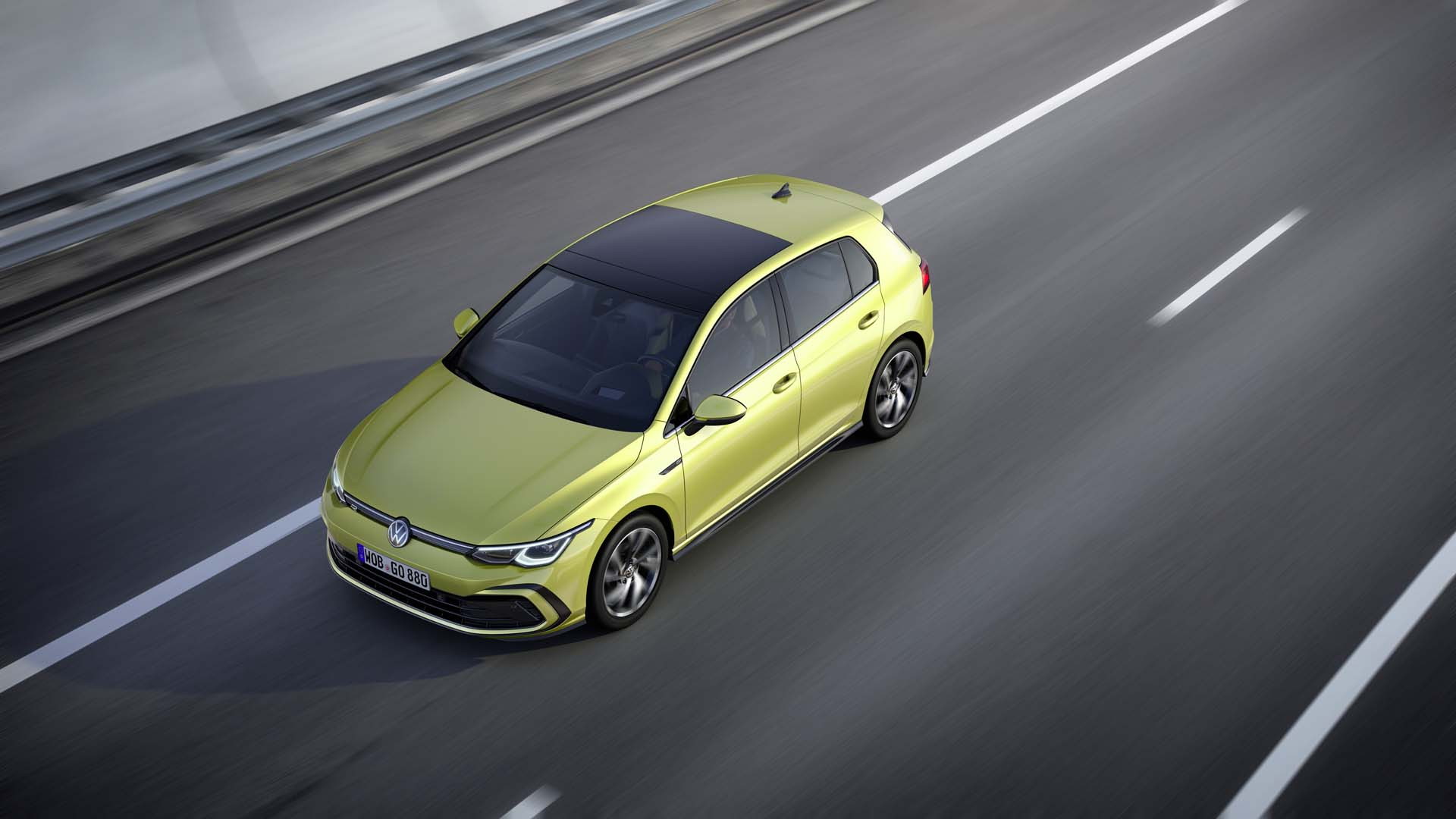 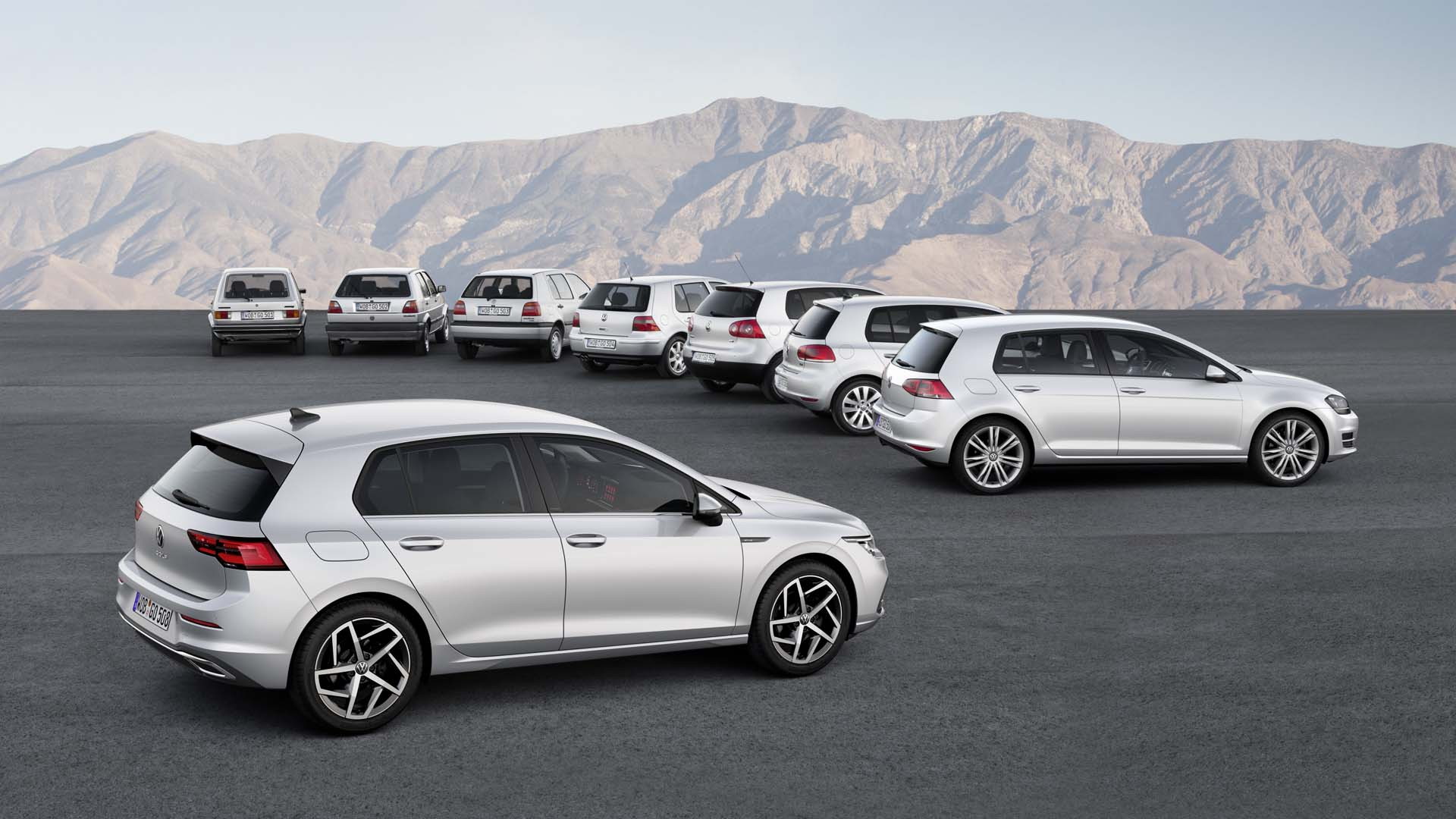 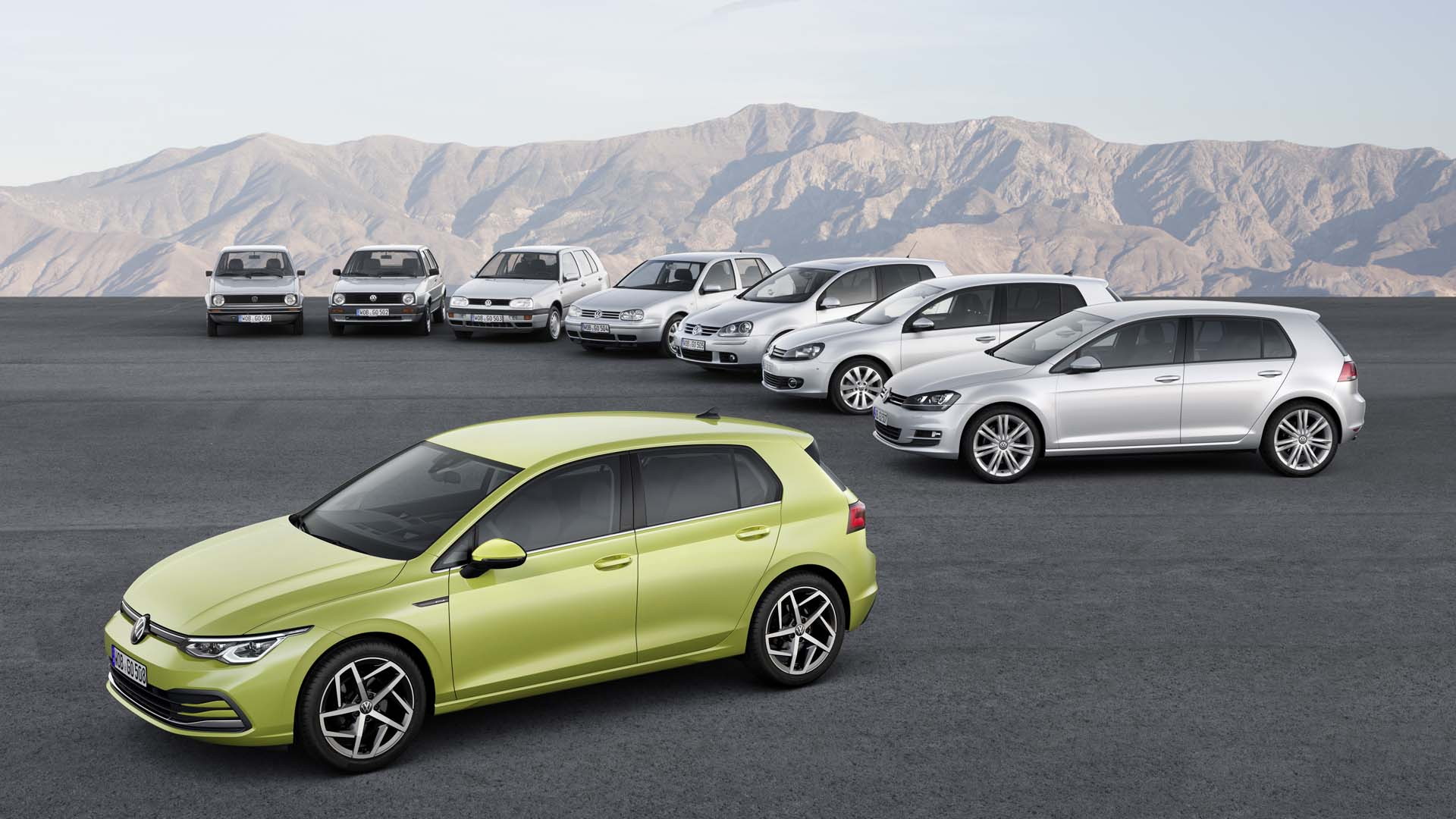 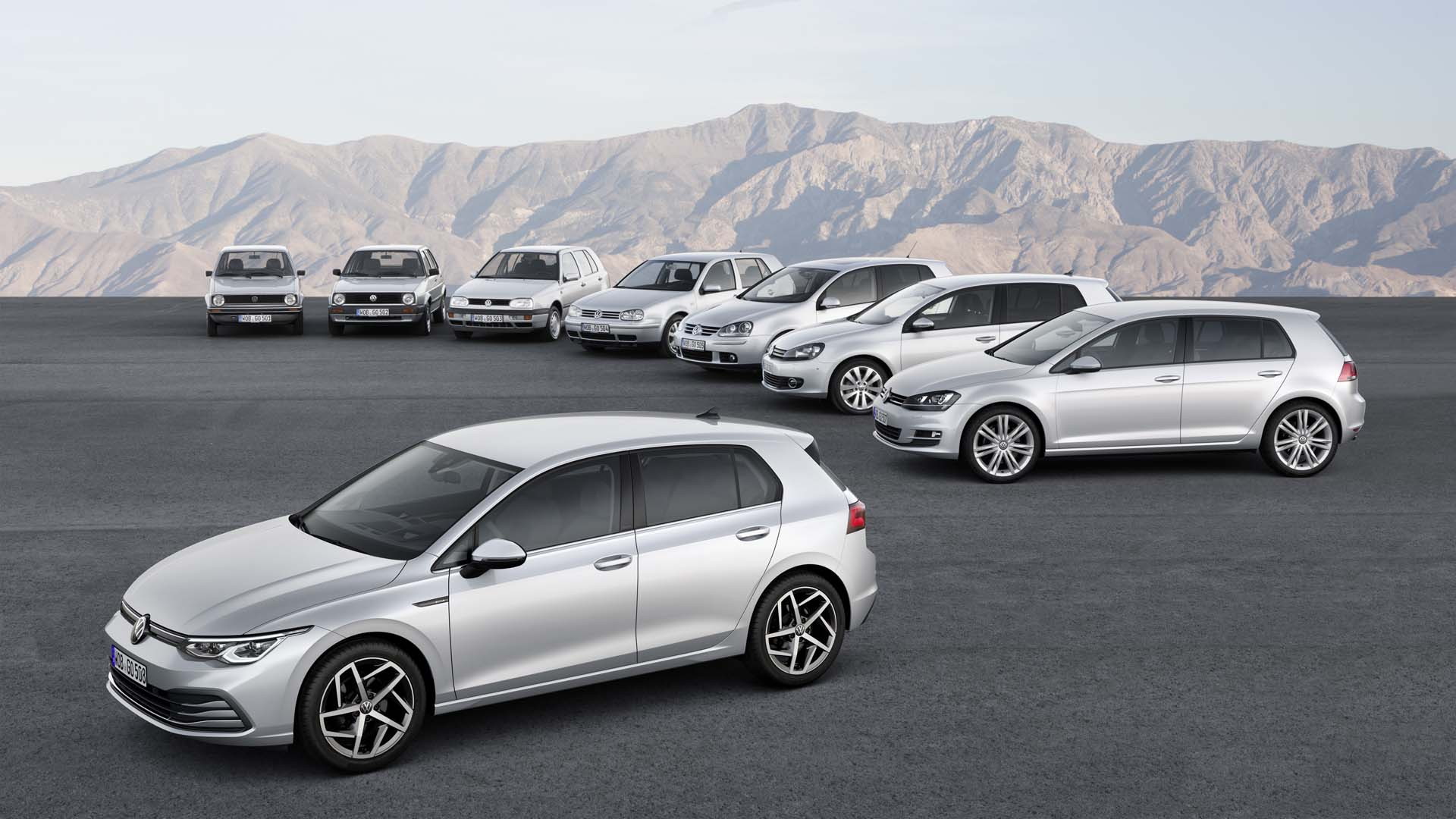 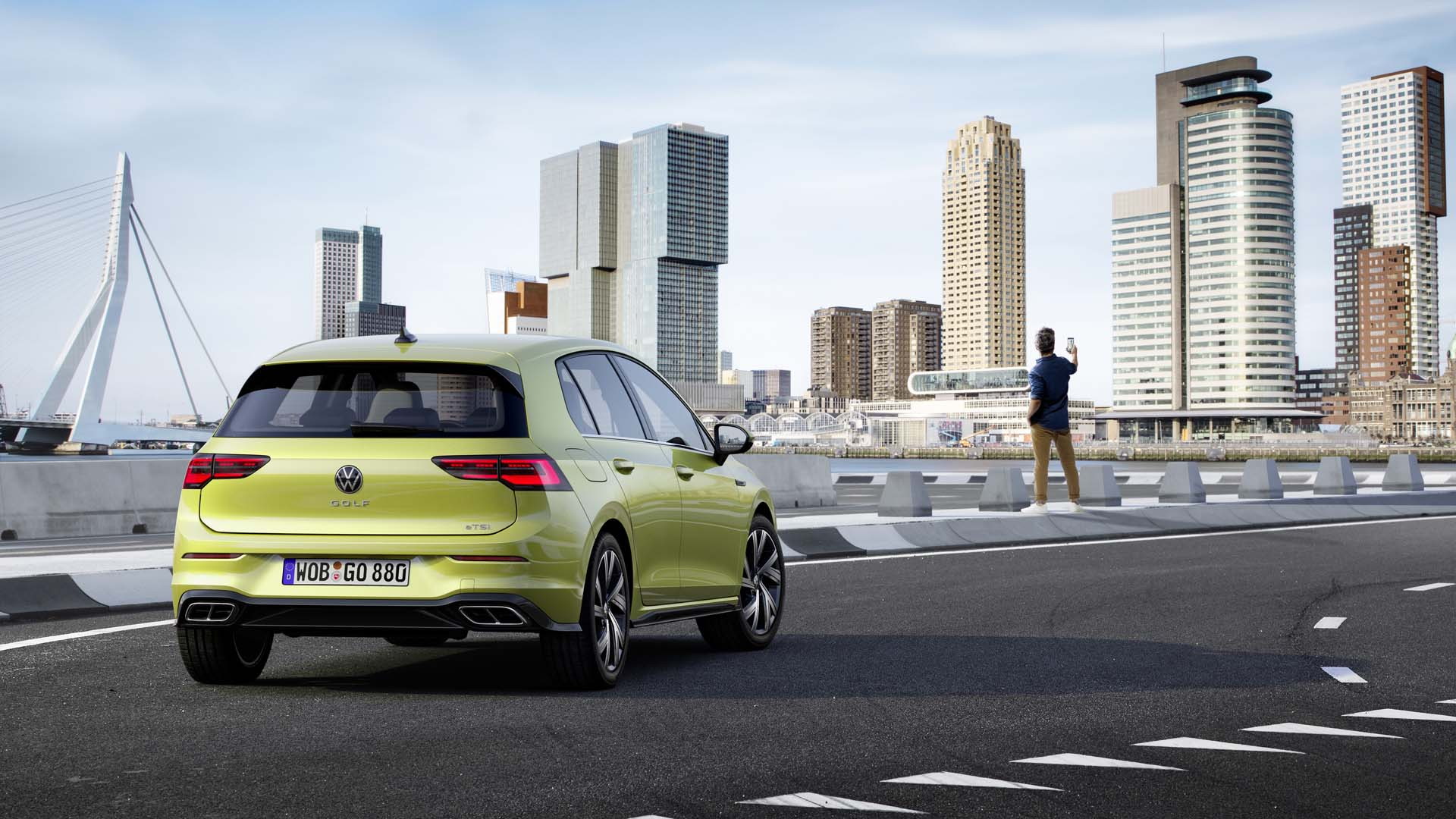 On Thursday, VW unveiled its eighth-generation Golf for the 45th year of the venerable nameplate, and one of the most prolific nameplates on the planet to usher the small car into its sixth decade of production.

Although the car will be sold in nearly every corner of the world, equipped with one of eight powertrains, it won't make its way to the U.S. initially—and not with an efficiency-focused engine.

That's because Volkswagen's push toward EVs has eclipsed the e-Golf and will reach across the world, in millions of cars, in various body styles.

What's left for the newest Golf is just as impressive, albeit mostly driven by fossil fuels.

The Golf unveiled Thursday in Germany will go on sale by the end of the year and doesn't stray far from the current version. The sheet metal on the new Golf is nearly as crisp, with angular shapes on the hood and tailgate, including LED lights on front and back. Inside, the Golf goes further with newer tech, including a standard 10.3-inch digital instrument cluster and an 8.3-inch touchscreen for infotainment.

VW boasted the newest Golf's technology, which includes vehicle-to-vehicle and vehicle-to-infrastructure communication that can warn nearby drivers of obstacles, adverse road conditions, inclement weather, or other events. The Golf also connects to the internet to stream music, road information, and car information. VW says the Golf may be updated over-the-air later to offer new features not included on the vehicle at purchase or other connectivity perks.

Under the hood of the new Golf are eight available powertrain configurations, the most offered on any Golf despite no EV option. The Golf will be available with one of three gas engines, two hybrid options, one natural gas engine, or even two diesel-powered options.

The turbodiesels available in the new Golf have been made "from scratch," although it's unclear how far VW went to remake those engines. VW called the diesel engines one of the "world's cleanest combusting engines." A performance-minded GTD will return.

The gas-powered models—a 1.0-liter, 1.5-liter, or 2.0-liter—will be the most popular among buyers around the world, and only the 2.0-liter is slated to reach U.S. shores officially. VW hinted that a plug-in hybrid version of the Golf could make it to the States—potentially a GTE version—but hasn't yet confirmed any plans.

The other hybrid options, which are a 48-volt systems, are the first fitted to the Golf. It reportedly improves the Golf's efficiency by 10 percent, compared to gas-only models. The 48-volt mild-hybrid system will be fitted to the 1.0-liter turbo-3 engines with varying outputs.

The plug-in hybrid powertrains pair a 1.4-liter turbo-4 to an electric drive motor and 13-kwh lithium-ion battery. Although a range-focused version will be sold overseas, a performance-minded GTE will be sold alongside those versions—and perhaps the U.S.