A new report by the U.S. Energy Information Agency forecasts that for the first time in two years annual carbon dioxide emissions in the U.S. will decrease.

The report, issued last week, forecasts that U.S. CO2 emissions will fall by 2.2 percent in 2019, in what it says is the largest decrease since 2015.

The agency chalks up the drop to more coal-fired powerplants being retired and replaced by natural gas plants. Coal currently makes up 27 percent of U.S. power generation, which the EIA forecasts will fall to 24 percent in 2019 and 23 percent in 2020. Natural gas generates 35 percent of American electricity in 2018, which is expected to rise to 38 percent in 2019, before falling back slightly in 2020.

Part of the slowing decrease may come from the scheduled retirement of five nuclear reactors in 2020, the EIA report says.

Renewable energy is also forecast to grow over the next few years. Wind and solar power make up 10 percent of U.S. power generation in 2019, which the EIA expects to rise to 11 percent in 2019 and 13 percent in 2020. (Hydro power is forecast to remain flat, at 7 percent.) Recent reports have shown that the cost of installing new wind and solar power has dropped below the cost of keeping old coal plants running.

With all these improvements, why are the decreases so small? The EIA Annual Energy Outlook shows that while efficiency continues to improve for all types of energy use, the demand for energy continues to rise with economic expansion, population growth, and increased travel, making the switch to cleaner and more efficient fuels more imperative. Indeed, the International Energy Agency says worldwide energy demand grew by 2.3 percent in 2018.

Carbon dioxide is an unavoidable byproduct of combustion, so the only way to use it is to reduce the use of fossil fuels. That could come with more electric cars and more renewable generation of electricity. 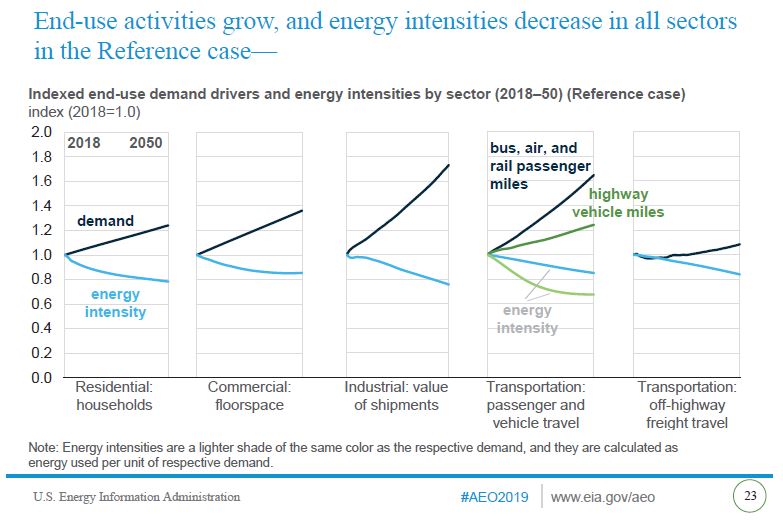 The EPA lists transportation as the largest source of greenhouse gas emissions, at 28.9 percent of U.S. CO2 emissions in 2017.

The drop in U.S. CO2 emissions comes despite efforts by the Trump administration to pull out of the global Paris Climate Accords, which seek to limit global temperature rise to 2.7 degrees Fahrenheit over pre-industrial levels by the year 2100.

Even then, the U.S. improvements likely won't be enough. The International Energy Agency reported that worldwide CO2 emissions rose 1.7 percent in 2018.