Drivers are buying electric cars, and advocates are keeping track.

Last month, Veloz, an electric car advocacy organization consisting of regulators, automakers, charging manufacturers and networks, utilities and others, announced that the U.S. had surpassed 1 million electric car sales. That's still less than 1 percent of the approximately 270 million cars registered in the U.S.

A single state can claim more than half of those cumulative sales. As of the end of November, Californians have bought more than 500,000 electric cars since the Nissan Leaf first went on sale in 2010. The exact tally was 512,717. The new statistic confirms an earlier estimate by Veloz.

Sales have tripled in the state over the past year, and were up 30 percent in November compared with the previous month, largely thanks to increased production of the Tesla Model 3. Pure battery electric cars are outselling plug-in hybrids in the state by about 30 percent.

With half the electric cars and about 5 percent of the cars on U.S. roads, California has a concentration of electric cars that's nearly 10 times higher than the country as a whole.

Veloz notes that this high concentration of electric cars will allow more consumers to learn about, experience, and accept electric cars. 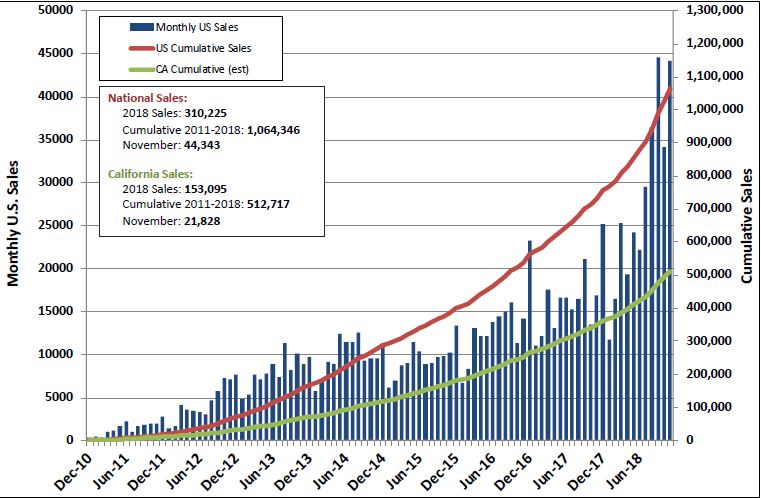 Researchers at Milan Polytechnic University published a report in Environmental Research Letters noting that electric cars have to be "socialized," introduced and shared by friends.  "For the electric vehicle, range and refueling stations are barriers to market deployment but also the car is often associated with identity, which might be more difficult to overcome,” says Oreane Edelenbosch, who conducted the research. If social learning doesn’t occur, the technology is unlikely to spread beyond enthusiastic early adopters because the perceived risks remain too high, the study notes.

“We’re seeing a clear trend toward electrification here at home and abroad,” said Josh Boone, executive director of Veloz. “Even more Californians will know about and experience these great cars. And ... many more will fall in love with a better way to drive.”

CHECK OUT: New electric-car ads to hit the other half of California drivers

An earlier estimate by Veloz, focusing on its "Electric for All" advertising campaign, showed that half of Californians still hadn't heard of an electric car.

Even as the leader of the electric-car vanguard, however, California needs to speed up the pace of electric-car adoption. More than 70 percent of counties in the state are still failing to meet air-quality standards.