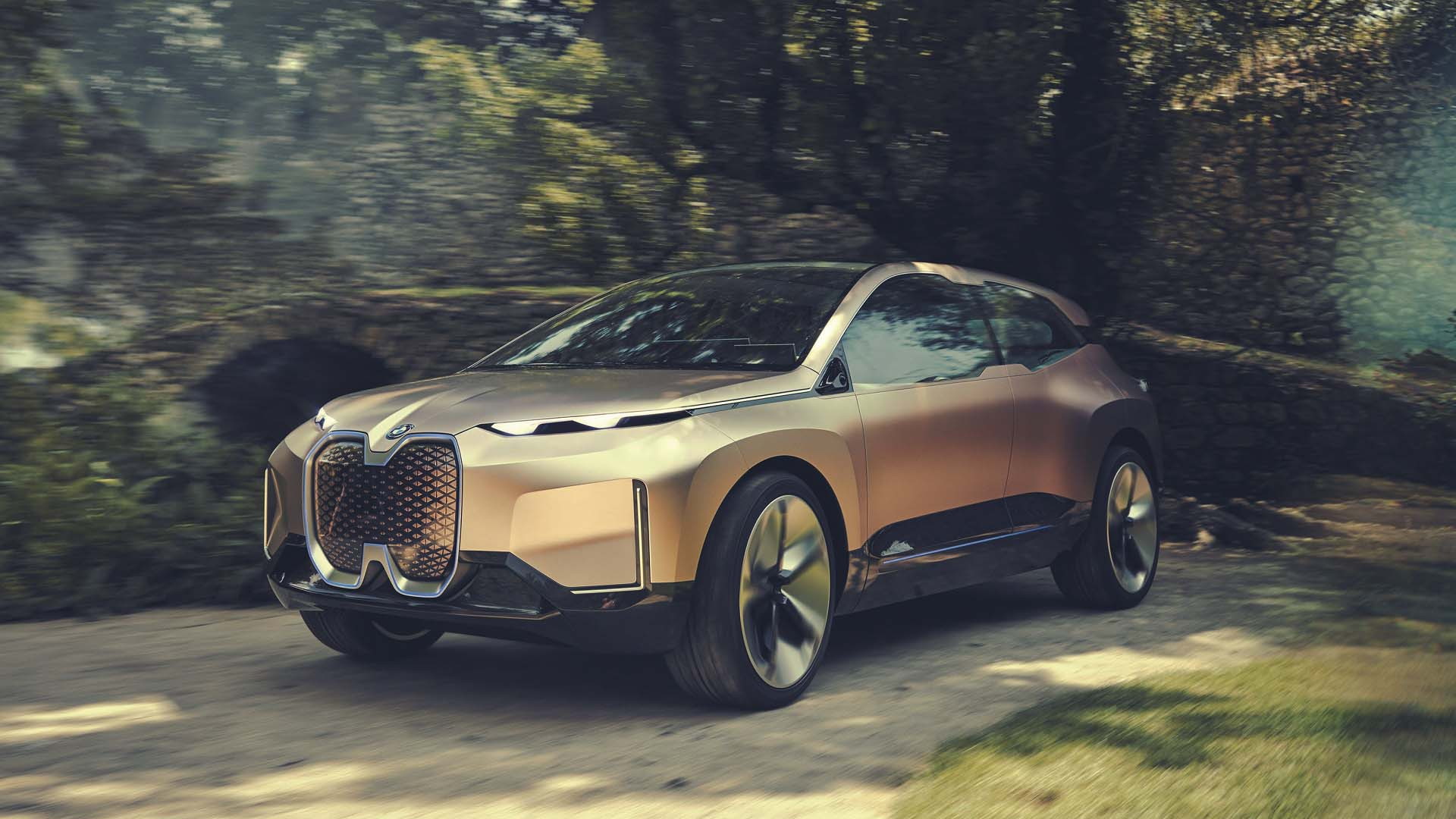 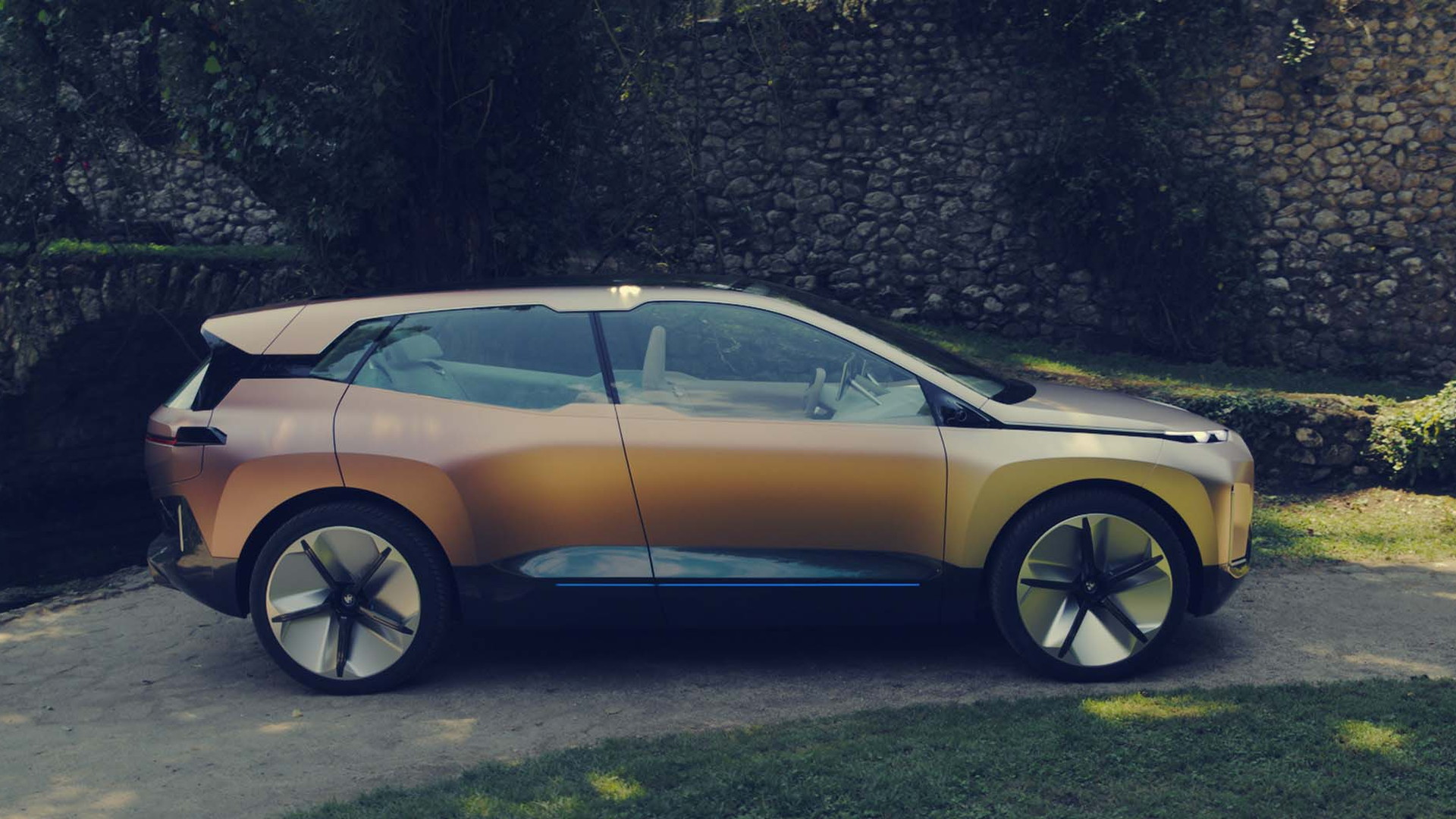 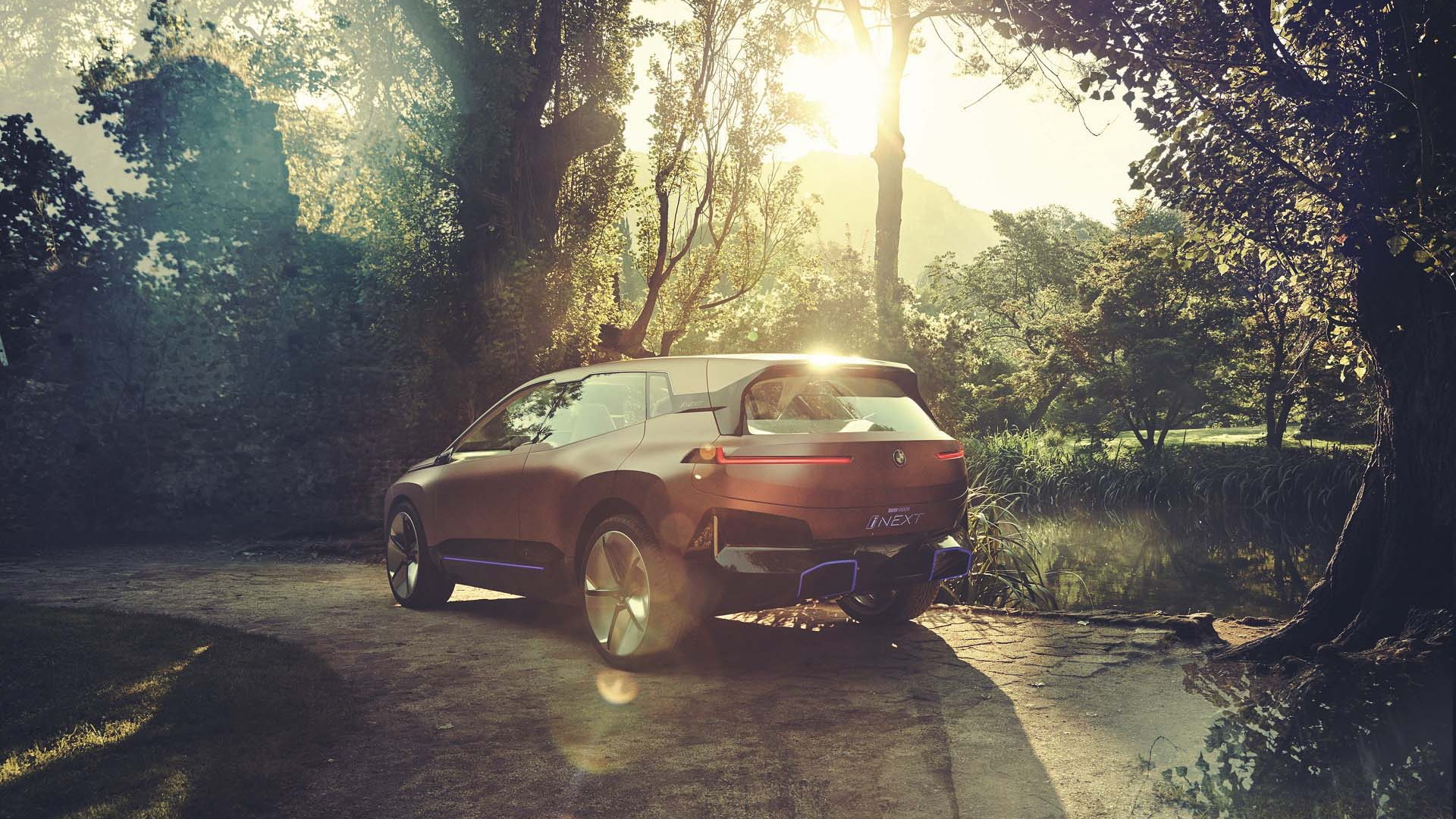 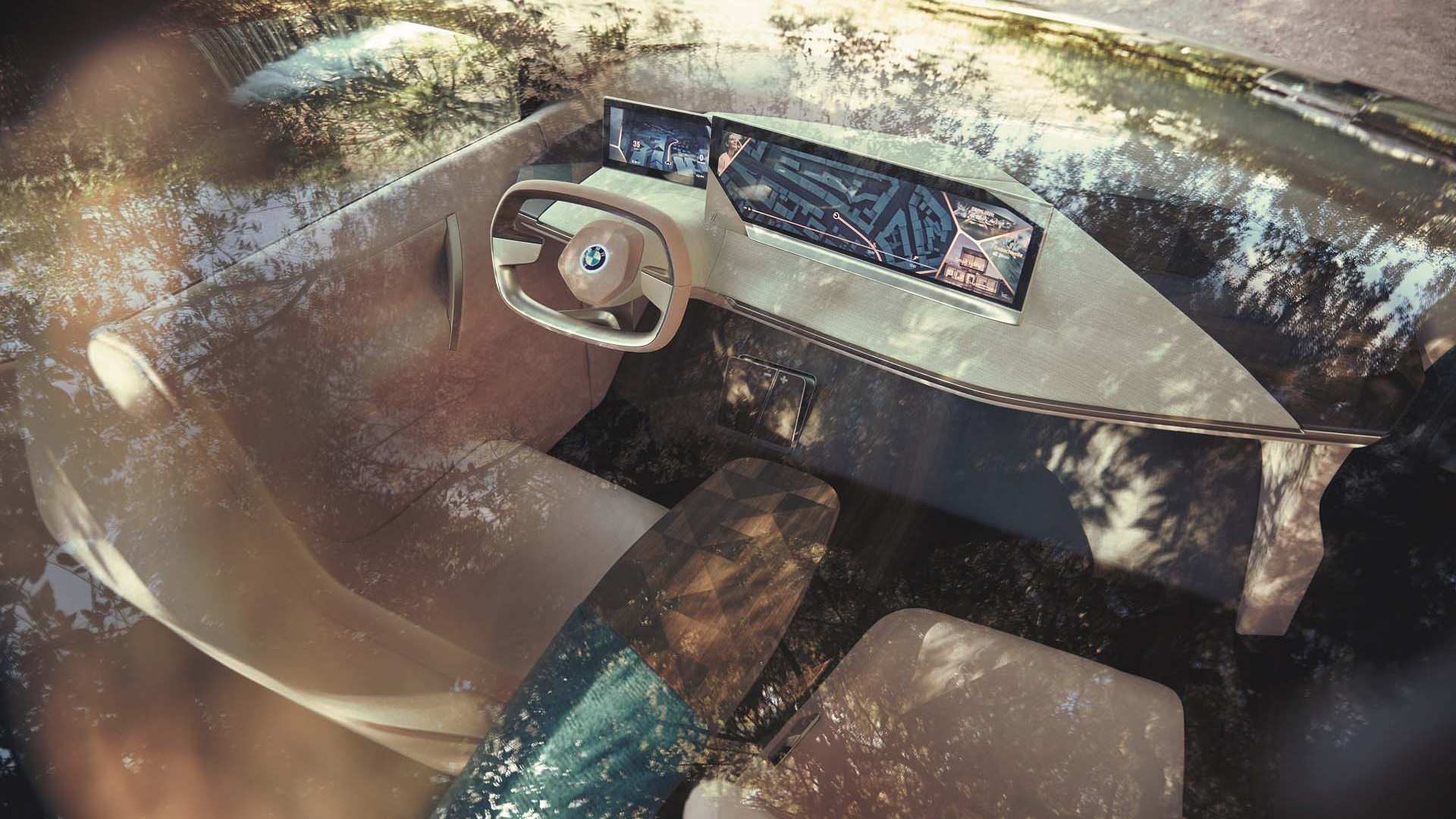 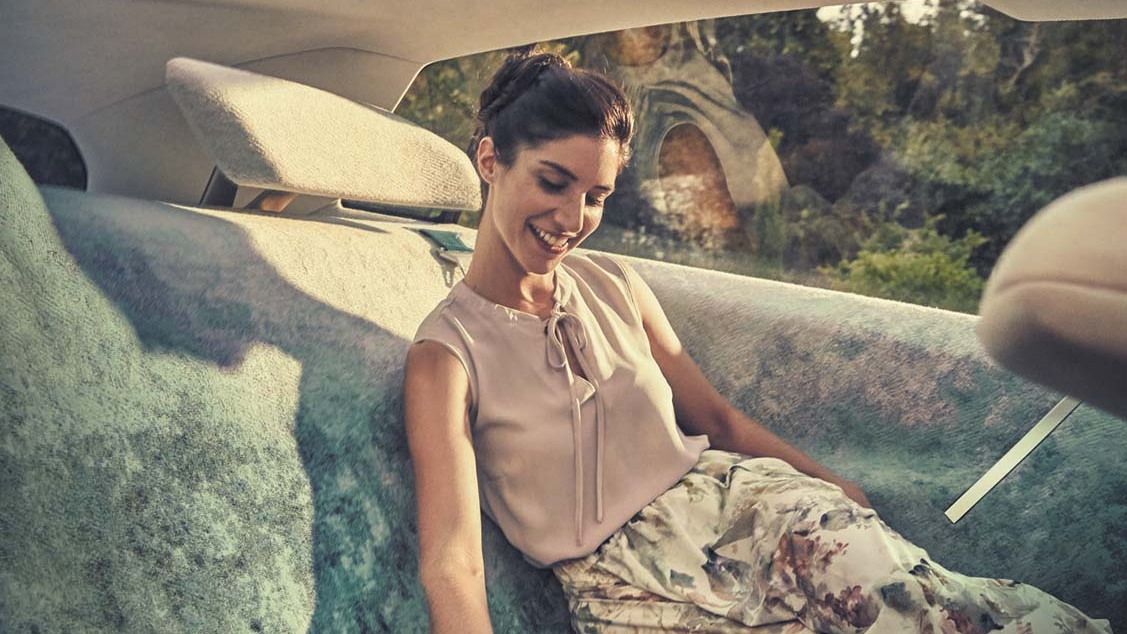 For decades, the flagship of every German luxury maker’s line has been its largest sedan: the Audi A8, BMW 7-Series, and at the pinnacle, the Mercedes-Benz S-Class.

The BMW Vision iNext, previewed for small group of journalists this week before Saturday’s global debut, entirely rethinks what a “flagship” should be in a future age of connected vehicles that use artificial intelligence to drive themselves when desired.

The iNext has no powerful V-8 or V-12 engine. It’s entirely electric, powered by a high-capacity battery pack giving more than 370 miles (600 km) of range on the (optimistic) European test cycle, and twin motors that hurl the big vehicle from 0 to 62 mph in less than four seconds.

While BMW promises “engaging” roadholding, the iNext is intended to preview the company’s idea of how occupants will be catered to when a car operates autonomously. The company promises genuine Level 3 autonomy on limited-access highways, with later Level 5 autonomy as a “best-case scenario” in countries where it's legal.

And, reflecting the global market shift, the new flagship is not a “three-box” traditional sedan but a higher, bulkier utility vehicle with a hatch at the back.

BMW says the car was conceived to answer the question: “How will we be moving around in the future?”

Note “driving” is not used in that sentence—the company assumes many customers for future high-end luxury vehicles will want their time to themselves. They’ll be content to leave the driving to the machine whenever possible.

For those buyers, “time is the most valuable resource,” the company said.

BMW board chairman Harald Krüger said in May the iNext project will “provide our building blocks for the future,” but at the press preview, the company didn’t want to discuss the battery, the motors, or any of the electric powertrain that will propel the production iNext.

Make no mistake: This is a preview of a future all-electric BMW flagship, though one not likely to hit the road until 2022 or so. It will be the third new battery-electric BMW to launch, following the BMW iX3 for 2020 and the BMW i4 sedan for 2021.

All three cars are the fruit of BMW’s full rethink in 2016 of its electric car program, which began 10 years earlier and was called “Project i.” It resulted in the BMW i3 small electric hatchback and the BMW i8 plug-in hybrid sport coupe, both new in 2013.

Since then, the company's only new electric launches have been plug-in hybrid versions of its conventional gasoline sedans and crossovers—no dedicated new vehicles. The 2016 rethink concluded that not only had battery costs come down faster than expected, but that customers wanted long-range electric vehicles that were in familiar formats, not nearly as exotic as the i3 and i8.

So the BMW iX3 of 2020 will be a battery-electric version of the new X3 compact crossover utility, with 200 miles or more of rated range. The BMW i4 the following year will be a distinctively styled compact sedan lined up directly against the Tesla Model 3. And the iNext—which could, we suspect, get a model designation like iX9—will sit at the top of the range above the upcoming X7 SUV.

So you can think of the BMW iNext, said Klaus Fröhlich, board member for development, as the first fruits of a “Project i 2.0.”

If luxury is no longer about the driving experience, then the company suggests it wants to sell you cars whose interiors will become “your new favorite place,” a phrase repeated several times in the presentation.

That means you’ll still be able to drive them if you like, but you won’t have to—and if you don’t, the car will adapt to each occupant’s preferences.

BMW highlighted a few aspects of the iNext concept, including controls integrated into the furnishings that light up only when an occupant brushes a finger over them, or what it called “shy tech.” Turning on the music, for instance, could be achieved by drawing a note on the panel of glowing dots that appears on the seat upholstery. (The BMW reps had a bit of trouble getting this to work.)

Those iNext seats, incidentally, were covered in a striking Jacquard fabric in a rich and nubbly turquoise nap over a beige mesh, part of an emphasis on “nude colors” and 3-D textures. The upholstery appeared half-worn, reminiscent of a fine old Persian rug—something likely never seen before in a concept car. The interior style, BMW said, was inspired by that of boutique hotels.

A full glass roof and ample ambient lighting give the cabin a light and airy feel, assisted by relatively tall side windows. Front-seat occupants have a large central monitor on which to view content, and the driver has a panel that offers a more conventional instrument cluster. A wooden floor includes large wooden brake and accelerator pedals that retract flush into the toeboard, along with a small rectangular concept-car steering wheel that looks hard to use and seems highly unlikely to make it into production.

In the rear, however, BMW suggests that “intelligent beams” overhead could project a movie or keyboard or other content onto any flat surface in the occupant’s lap, be it a tablet or a book or a table.

The BMW iNext, said designer Dirk Müller-Stolz, pioneers an evolution of the “StreamFlow” design language introduced in the i3 and i8.

Rather than the company’s classic "Hofmeister kink" at the end of the side window, the body sides rise on the middle and rear pillars toward similar downward extensions from the edges of the roofline. Contrasting sills with the signature blue accent arch upward between the wheels to visually reduce the height of the sides.

The latest iteration of the double-kidney grille—the pair connect in the middle here—is a blanking plate with a complex graphic behind which are the multiple sensors required for autonomous driving and automated safety systems. The characteristic “four-eyed” headlights remain, but in very slim strips either side of the upper edges of the grille.

Massive 24-inch wheels are in proportion to this bulky SUV shape. While it’s a large vehicle with a bluff front end, the effect is intended to be confident and planted but still “friendly,” Müller-Stolz suggested, with simple surfaces and clean lines. Borrowing another Silicon Valley effect, the door handles retract into the body sides when not needed.

Like all concept cars, the BMW iNext offers some hints of possible future technology while it previews the rough form of a future production vehicle. In doing so, it signals that the German luxury flagship vehicle will change greatly in the coming decade. Wait for it.

Electric Car: 2019 Nissan Leaf to cost $30,885, long-range battery... Range Electric: Electric crossover charge: These are the rivals to the... BMW I8: BMW will have 25 electric cars, plug-in hybrid models... Tesla Model: Tesla Model X gets new 75D base version, replacing 70D... BMW I3: Watch The BMW i3 Electric Car Park Itself, As Owner... Electric BMW: Electric Mini to be made in U.K., despite BMWs Brexit...