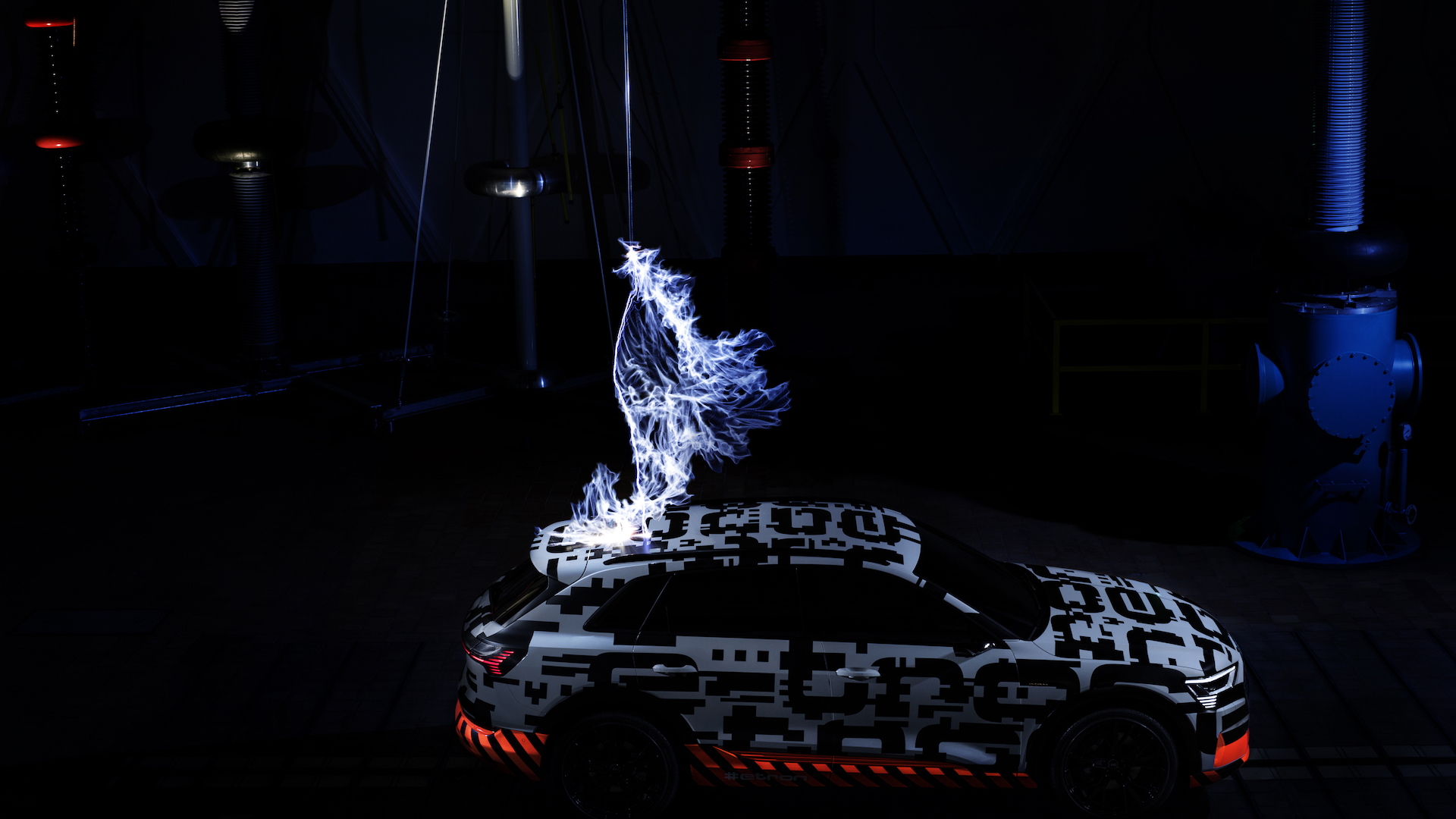 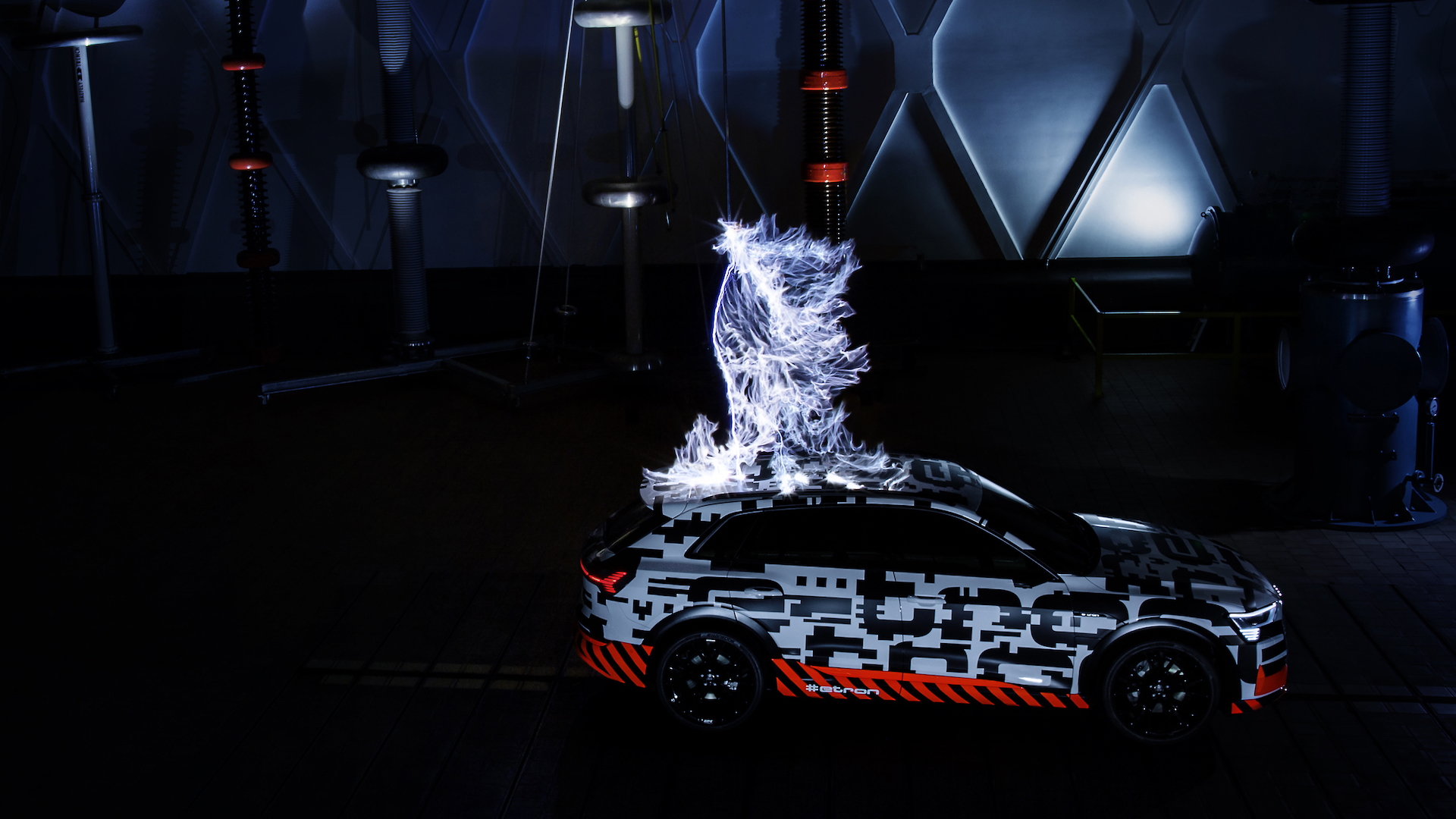 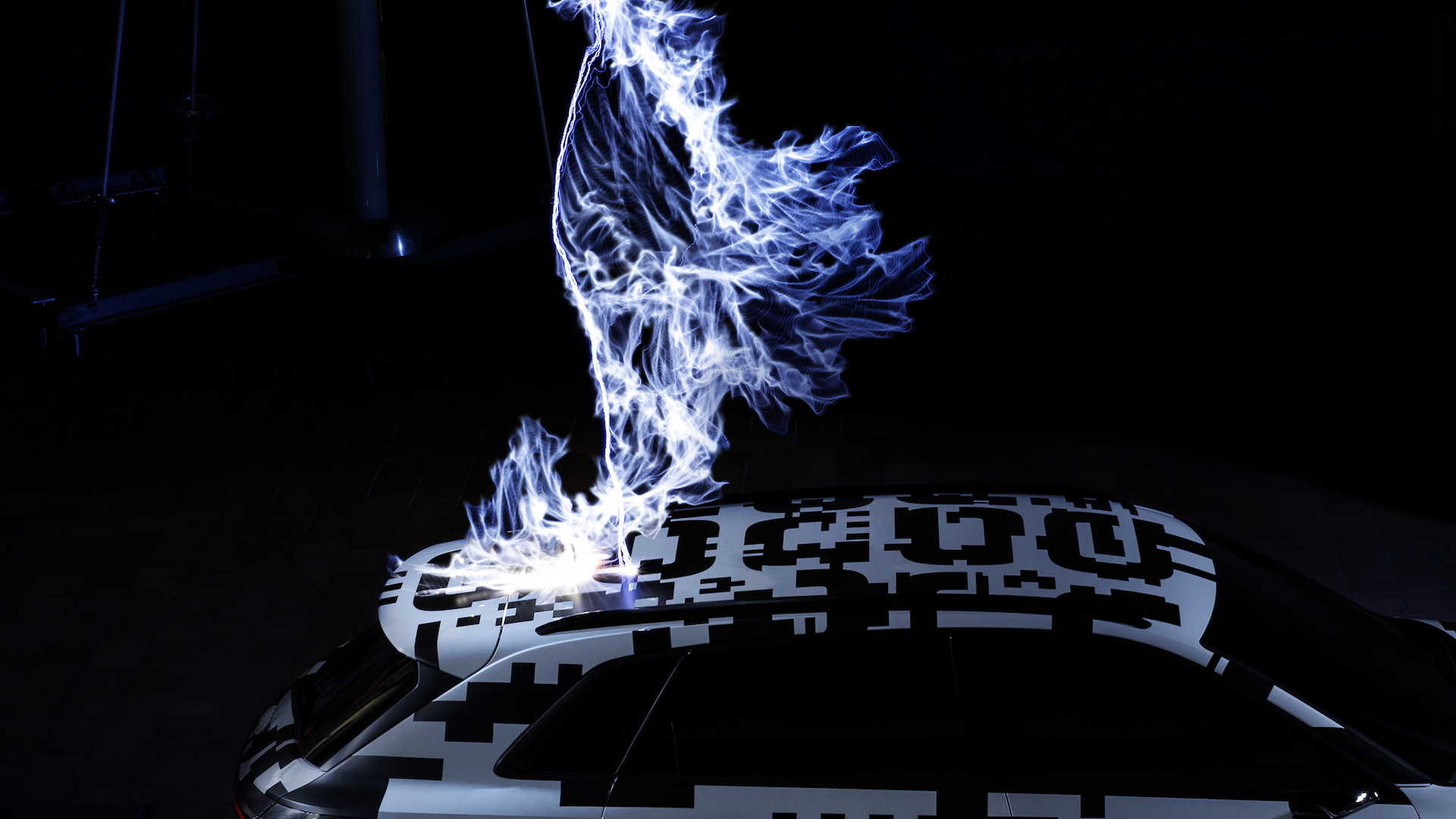 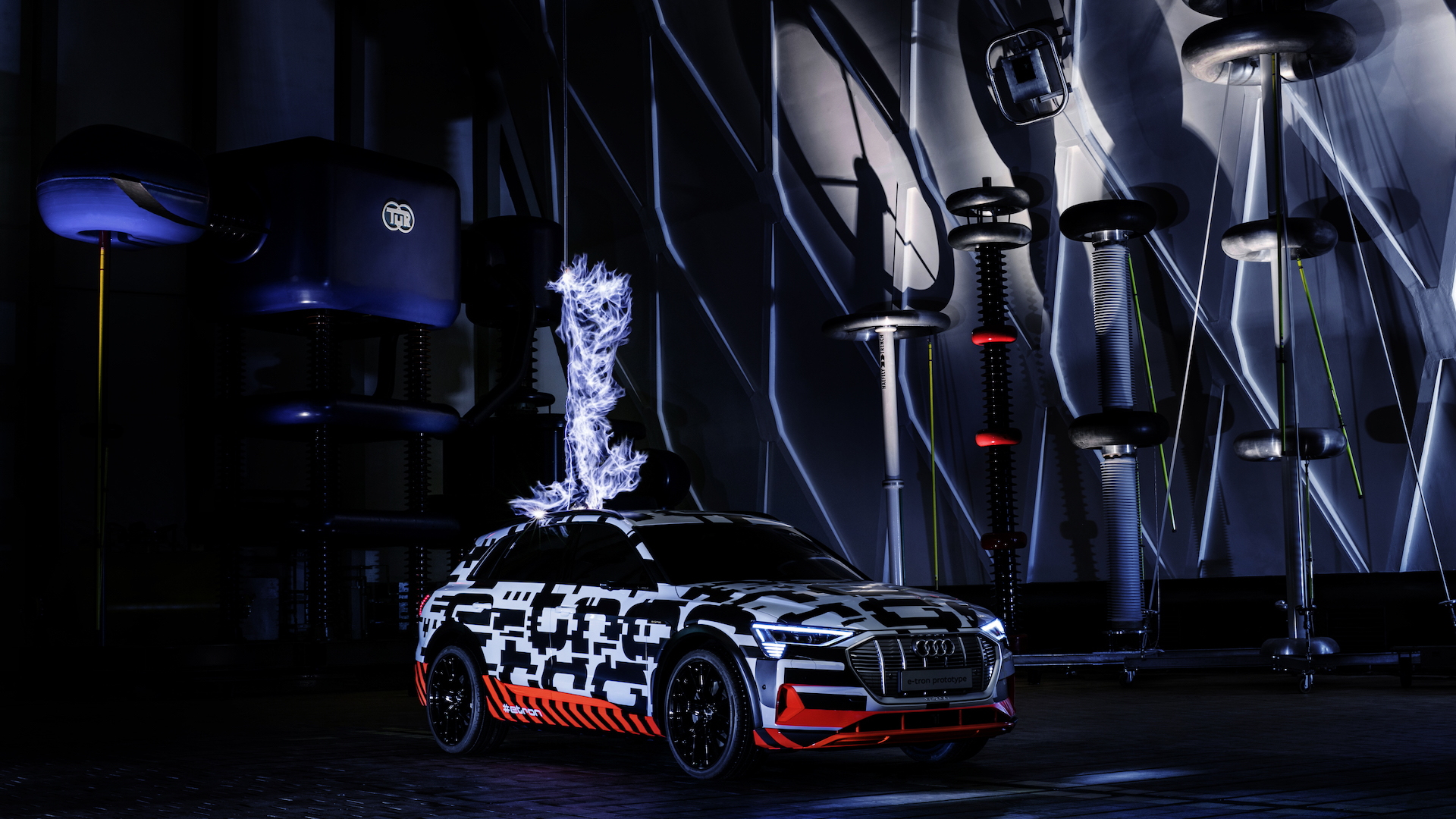 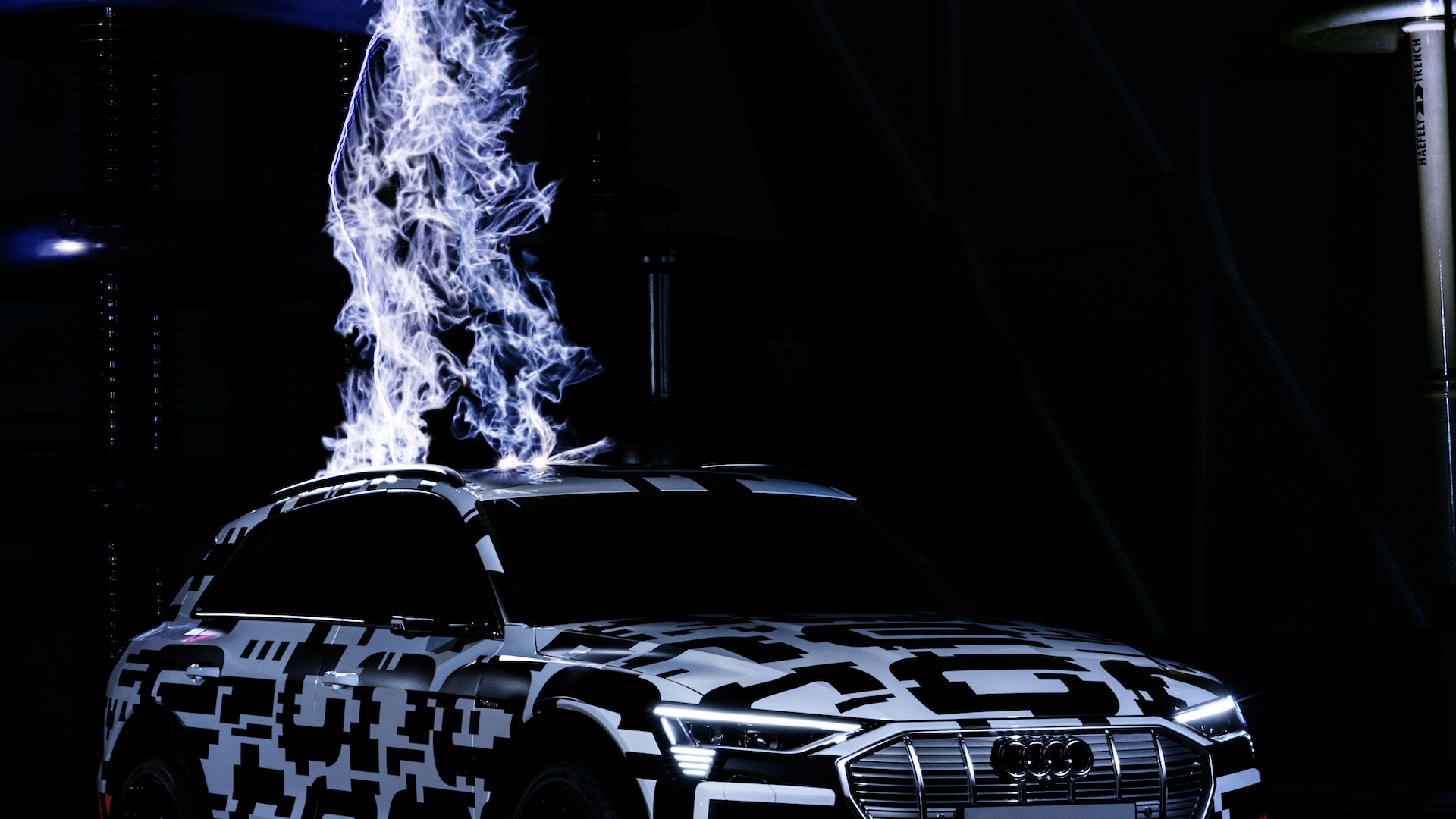 When the Audi e-tron battery-electric SUV goes on sale next year, its 432 battery cells will drink from a 150-kw charging firehose–a rate quicker than the Jaguar I-Pace or a Tesla Model S.

The high-energy battery pack, detailed by Audi in Berlin on Wednesday, has an apt, caffeinated analogy built right into its sandwich layer of lithium-ion power. Each battery cell comes in a flexible aluminum-polymer envelope the size of a bag of coffee.

The 2019 e-tron SUV will be Audi’s first mass-produced electric car, the first of 10 battery-electric cars that the brand will develop and sell in the next few years.

By the time Audi’s planned family of battery-powered vehicles come to market in 2025–in shapes and sizes from compact hatchback to full-size executive car–some 30 percent of Audi’s lineup will be electrified, a promise that’s grown since Audi started down the path to electrification early in the decade.

For its first mass-produced battery-electric pack, Audi designed a flat sandwich of 432 cells that live under the 2019 e-tron’s floor, between its front and rear axles and electric motors. (The e-tron, for reference, sits between the current Q5 and Q7 SUVs in size.) Thirty-five bolts connect the battery box to the body.

The battery pack measures 5.3 feet wide, 13.4 inches high, and 7.5 feet long, roughly the size of a queen bed. The mostly flat pack has a higher section that sits under the e-tron’s rear seat, where Audi packages additional battery capacity. In all, the pack weighs some 715 kg, or more than 1,573 pounds.

In all, there are 36 battery modules in each pack, each about the size of a shoe box. In each module, Audi nestles 12 pouch-style 60-ah (3.5-volt) cells, for a total of 432 cells. Each of those cells is the size of a bag of coffee.

A set of thermal circuits filled with anti-freeze forms a sort of cooling bed frame for the e-tron battery pack. It’s sealed and thinly sandwiched beneath the pack, not woven between the cells. That prevents more damage should the circuit burst in an accident. Thermal adhesive glues the cooling circuit to the battery pack, and a thermally responsive gel cushions the cells inside the pack.

The pack draws cooling capacity from the air and from the anti-freeze liquid circuit. Under temperate conditions, the e-tron battery pack modulates temperature with air from intakes and a radiator, all guided by electronically controlled louvers that direct airflow. Under more extreme conditions, a chiller acts as a heat exchanger for the cooling circuit. It maintains battery temperatures of 77 to 95 degrees so the battery can be fast-charged repeatedly and quickly at a higher rate. The e-tron battery pack can only maintain those temperatures when the vehicle is in use, or when it’s plugged in for charging.

The 2019 e-tron battery pack will be assembled in Brussels.

Some 85 percent of electric-car drivers charge at home. The 2019 e-tron battery pack offers a trio of home-charge options, from household outlet to 400-volt/150-kw high-speed charging.

The e-tron will have 230-volt charge cord for basic home outlet service. Smart charging home systems will be offered in 11-kw and 22-kw configuration. The lower-capacity charger can top off the e-tron battery in about 8.5 hours; the 22-kw charger, in about 4.5 hours; it requires a second on-board charger.

The 22-kw charger also has smart-charging functions for owners to set times to avoid peak power charges and can draw preferentially from a home’s solar panels. It comes with a lockable connection and can be configured with a PIN, helpful if the system is in use in a multi-family dwelling, for example.

At high-capacity charging stations, the 400-volt/150-kw charging system delivers a 30-minute time for an 80-percent recharge, about what Audi suggests is the time European drivers take for a coffee break on the autobahn. That’s a quicker charge rate than the 100-kw Jaguar I-Pace and the 135-kw Tesla Supercharger, a rate Audi promises will be the quickest for any volume-production electric vehicle at the e-tron’s launch.

This 400-volt charging system will be joined at some point in the future by 800-volt systems that can charge at 350 kw. That system could bow on the production version of the Porsche Mission-E. A 350-kw charger would be able to charge the e-tron pack in about 12 minutes, which Audi compares to a gas-car fill-up time of about 7 minutes.

Charging, by the way, is ambidextrous on some e-trons. A standard left-side CCS port can be joined by a right-side, AC-only charge port, on cars equipped with the 22-kw home charging setup and its two on-board chargers.

In all cases, the charge procedure offers a bit of pizazz. Press a button and the charge flap on either right front fender motors down. A set of pulsing lights indicates charging status until it goes solid green at full charge. Once the car is unplugged, the flap retracts automatically. A human is involved: there’s no Tesla-style snake charming, which remains a clever bit of PR animation to date, in any case.

Charging: the where and how, for now

On the road, Audi promises widely available charging options up to the 150-kw level. While it says it doesn’t believe in free charging like Tesla has offered on some of its vehicles, Audi says it can offer e-tron drivers the non-proprietary choice of some 65,000 charging stations across Europe.

The catch: those stations range from single-point service to constituents in massive charging networks. Audi knits them together virtually under its myAudi umbrella. Drivers will use a single card at up to 80 percent of those stations, to charge and pay rates negotiated by Audi or at a minimum, to bill the charges to the card. A mobile app on smartphones or in the e-tron itself will calculate charging needs on a set route, and will suggest charge stations, based somewhat on the rates Audi negotiates with major players.

The high-speed charge promise is backed up in Europe and in America through two major efforts. Ionity is the European side: it’s a network of CCS stations built with 350-kw charging in mind, a high-speed network promoted by Audi as well as Daimler, Ford, BMW, and others. In Europe it will consist of as many as 400 stations built to 350-kw standards by 2020, each with two to ten charge points, set apart at 120-mile intervals on major driving routes.

In America, Volkswagen AG’s Dieselgate penalties have created the $2 billion Electrify America project. By 2019, Electrify America will steer that money toward the construction of some 290 charging stations with 150-kw charge capability. Electrify America also just announced it would put some charge points in 100 Walmart stores across the country.

Audi sees the 2019 e-tron as its new ambassador for electrified cars and mobility. The SUV arrives late this year in Europe, and sometime in 2019 in the U.S. Based on the VW Group’s MLB architecture, it’s something of a one-off: future Audi electric vehicles will be derived from a new group MEB compact electric-car or PPE large electric-car architecture.

U.S. prices have note been confirmed, but Audi suggests they will fall somewhere between the current Q5 and Q7.

In August, the e-tron will have a world premiere in Brussels, along with other electrified Audi products.

Audi specs for the 2019 e-tron will become clear late this year when U.S. pricing, charging and other data are released.