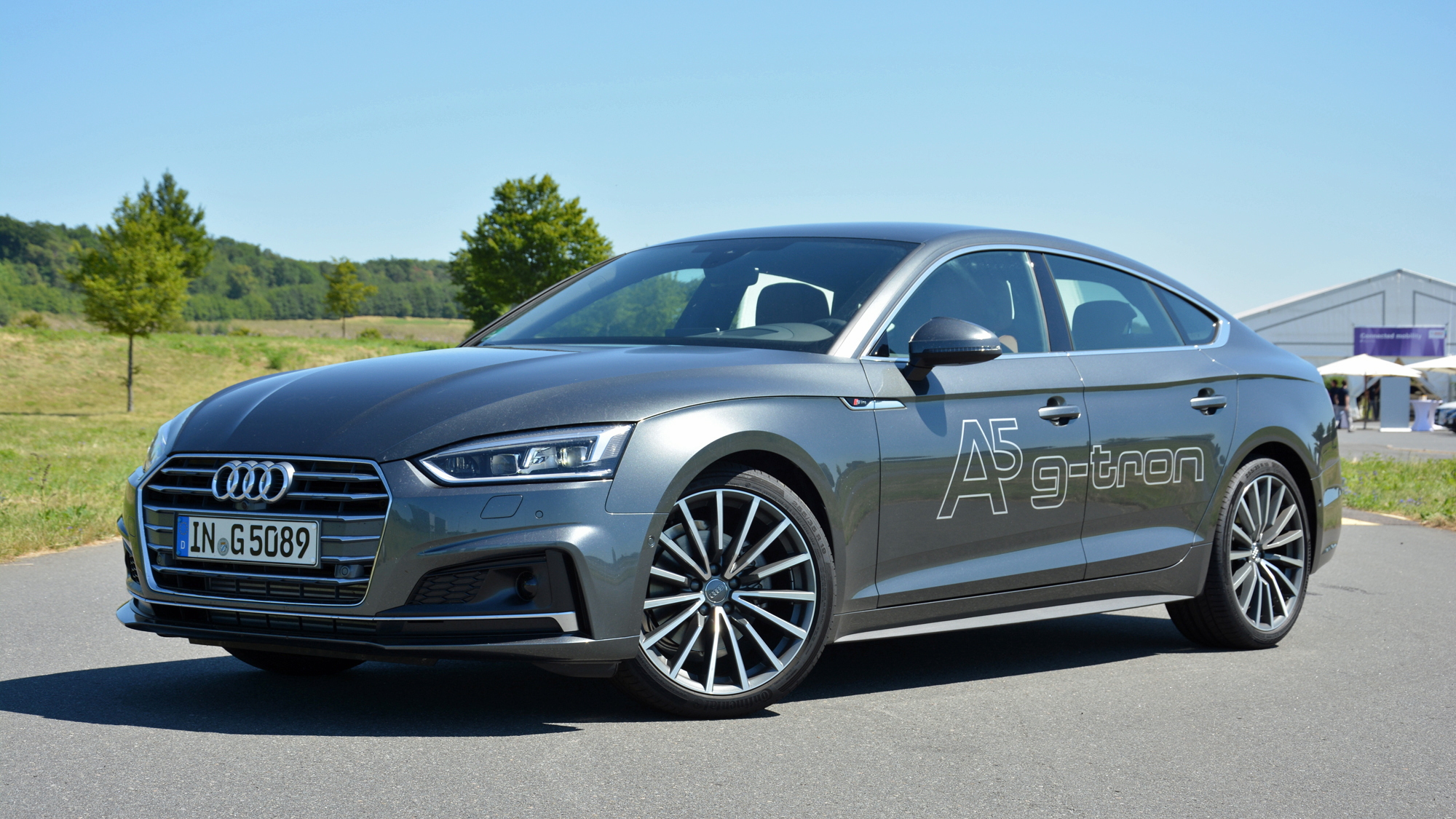 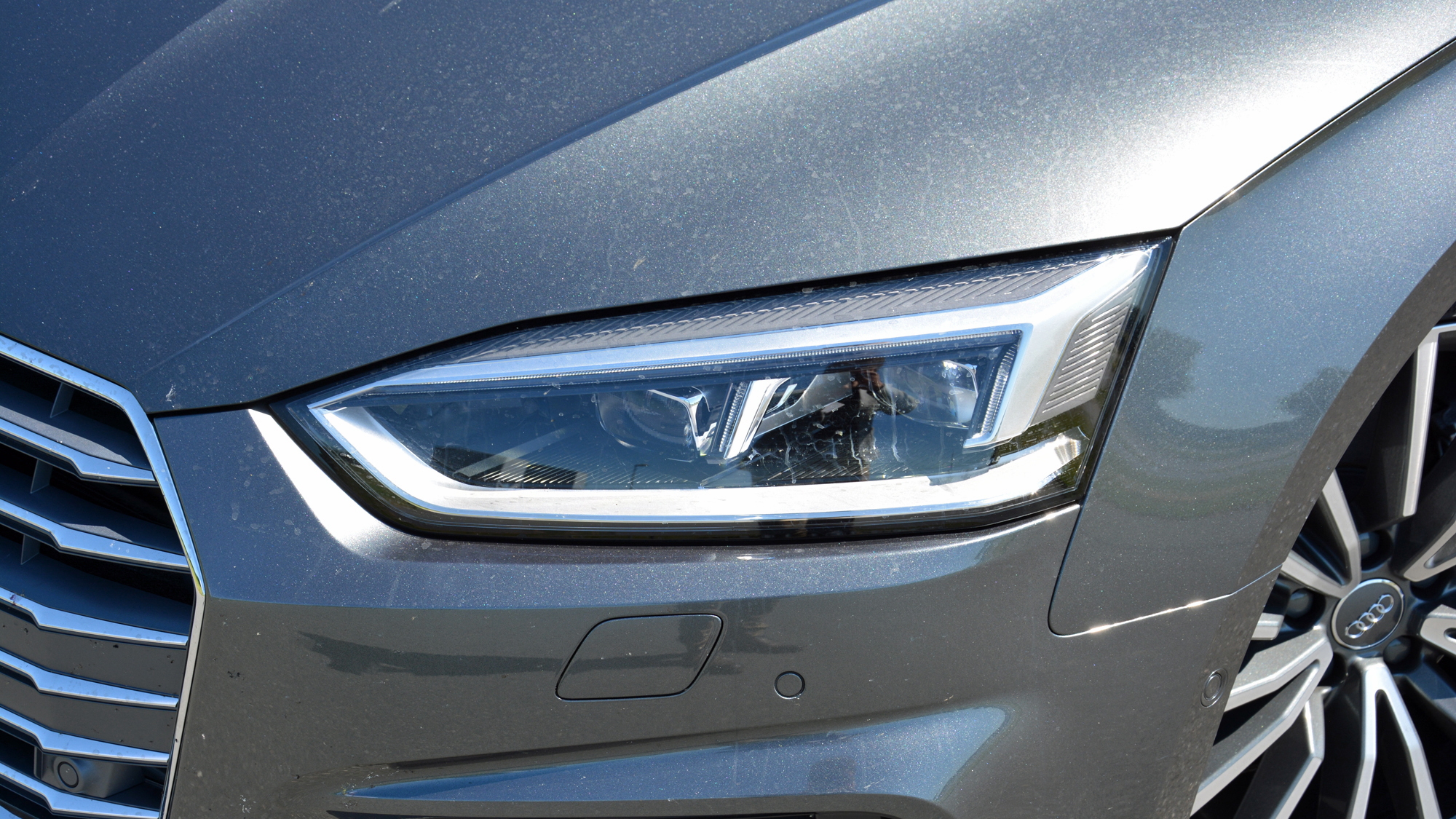 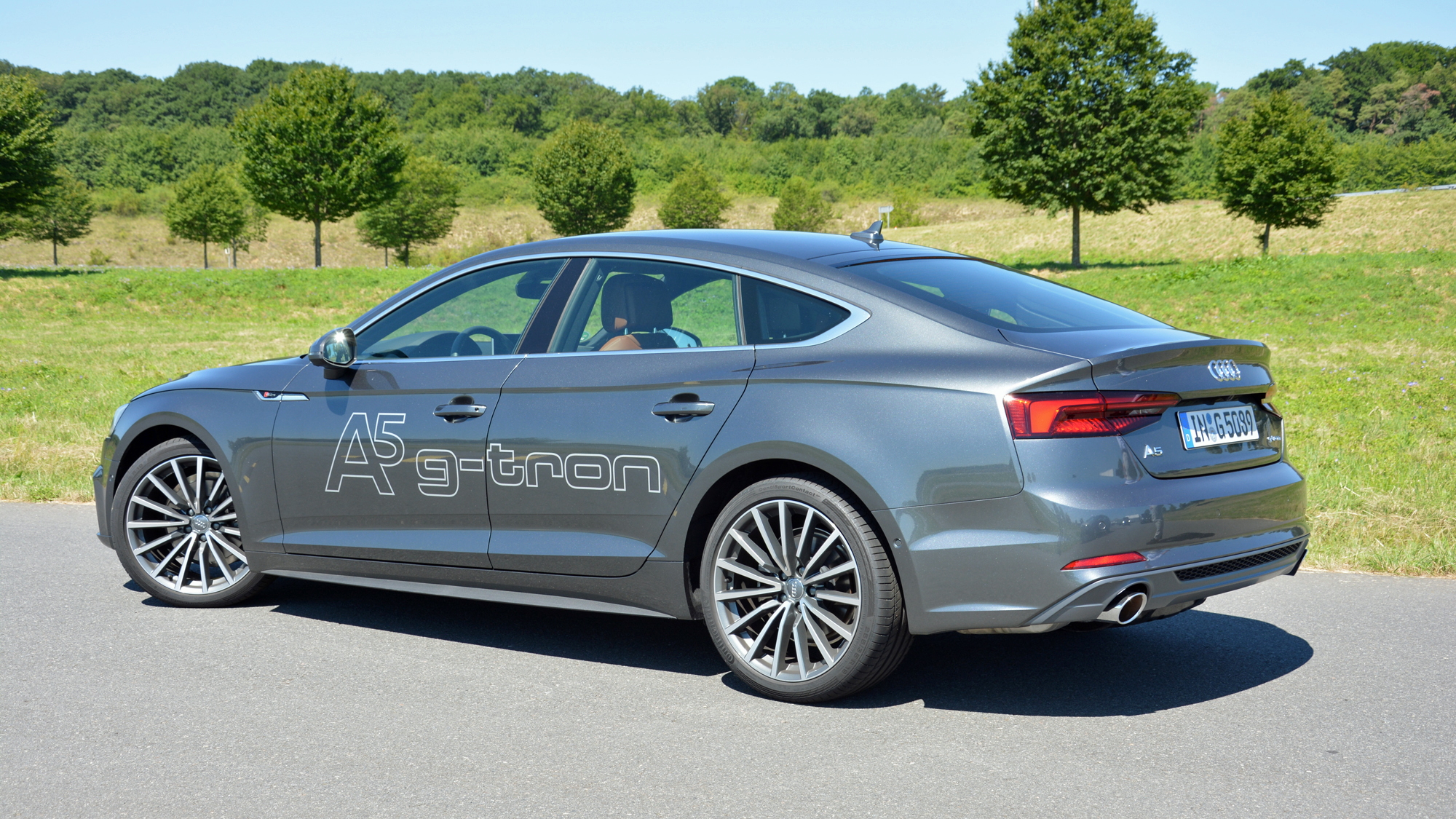 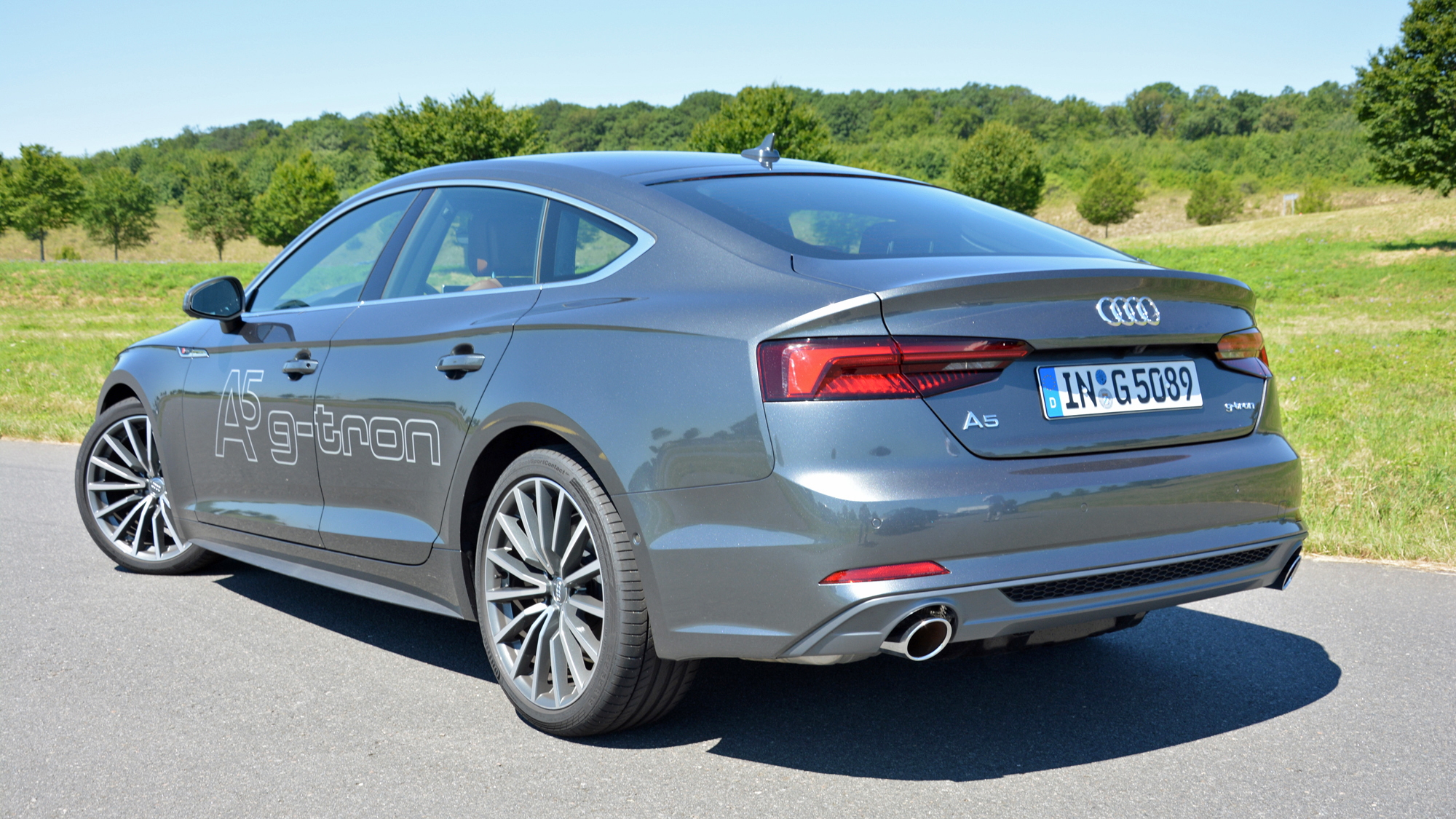 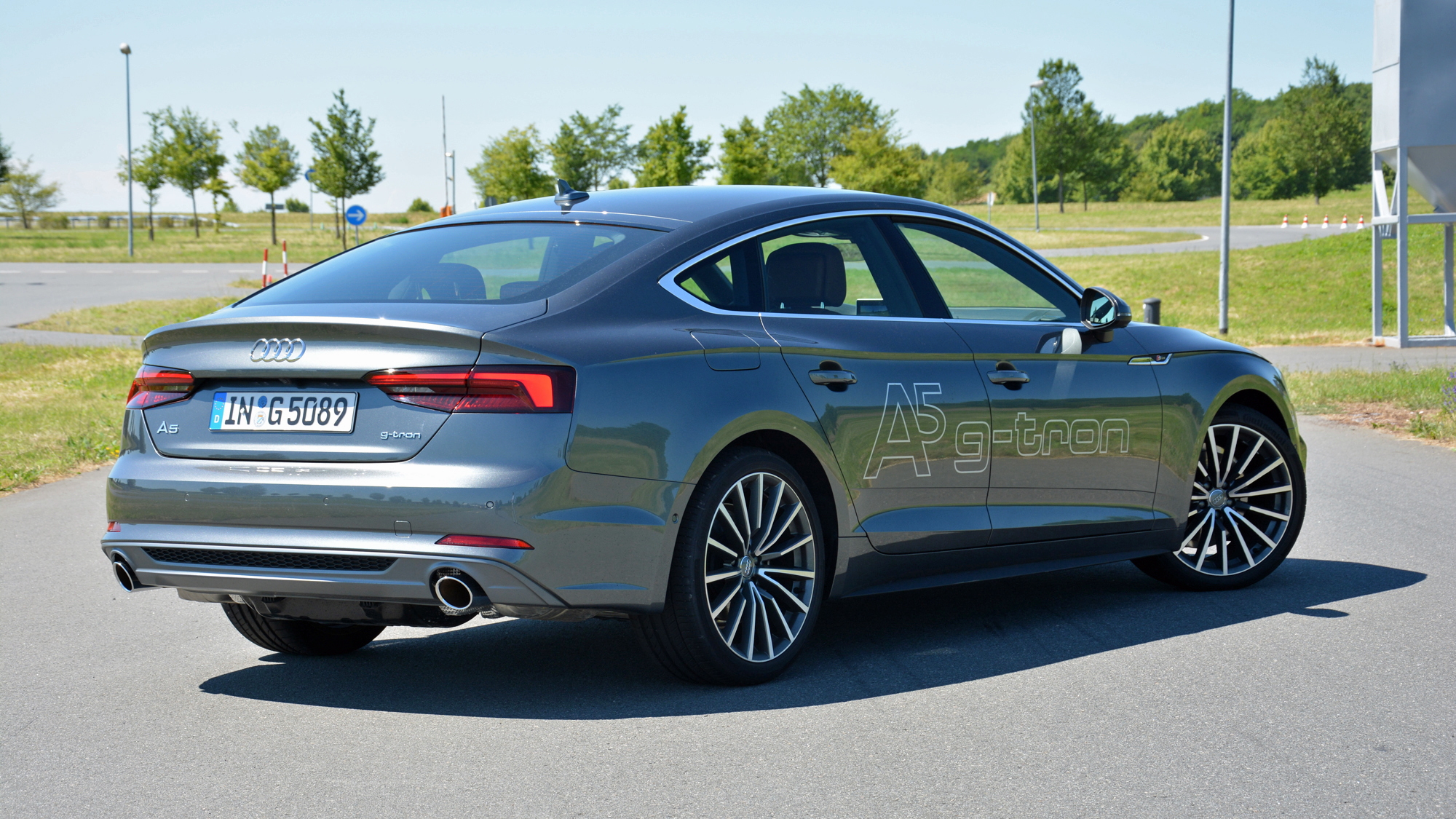 Audi’s vision of future mobility primarily centers around an array of long-range electric cars scheduled to debut in the coming years under the "e-tron" badge.

These are intended to be Tesla killers, as they’re often called in Germany.

But there’s another kind of tron with a “made in Germany” label as well, and it’s not a robot from a 1990s science fiction movie: Audi’s g-tron cars run on compressed natural gas (CNG) as well as gasoline; running on natural gas emits less carbon dioxide per mile.

DON'T MISS: Audi A5 is third model to run on natural gas, for Europe only

The second-generation A5 Sportback recently joined the A4 Avant wagon and the A3 in Audi’s CNG-powered family. It’s not coming to the United States, but we couldn’t resist the opportunity to take one for a quick spin in Germany.

The A5 g-tron has a turbocharged 2.0-liter 4-cylinder engine modified to run on CNG, with engine-management software from Bosch.

The turbo-4 is down on power compared to its gasoline counterpart, whose ratings check in at 190 hp and 236 lb-ft. An Audi spokesperson told us the compression ratio has been increased for part-load operation, which they predict will be the most common operating mode.

The TFSI engine powers the front wheels only; there’s no such thing as a g-tron quattro. A 6-speed manual transmission comes standard, but our test was fitted with the optional "S-tronic" 7-speed dual-clutch automatic transmission.

In this configuration, the A5 accelerates from 0 to 62 mph in 8.4 seconds and keeps going until 140 mph. It’s about a second slower to freeway speeds than the standard Sportback, yet it’s about half a second quicker than the base gasoline- and diesel-powered variants.

The CNG is stored in high-pressure tanks sandwiched under the passenger compartment. They’re made of such composite materials as carbon fiber and fiberglass to avoid adding too much weight to the car.

They store a total of nearly 42 pounds of gas at a pressure of 200 bars (2,900 psi), which provides the A5 with up to 500 miles of driving range on CNG alone. Switching to gasoline adds another 280 miles of range, according to Audi.

Theoretically, you could drive the g-tron from New York City to the outskirts of Chicago without needing to stop for fuel.

What’s in the tanks?

When you do manage to find a station, refueling takes about as long as it would for a tank of gasoline. Natural gas is often cheaper than gasoline, too, not to mention lowering CO2 emissions.

CNG is not to be confused with liquid petroleum gas (LPG), a mixture of propane and butane that’s liquefied—hence its name—and stored under pressure. LPG can’t be considered a mainstream fuel either, though it has a small but loyal following in Europe.

The g-tron is also capable of running on the "e-gas" fuel Audi manufactures in-house. It’s a synthetic natural gas produced in England and Germany since 2013. Using renewable wind energy, Audi splits water into oxygen, which is released back in the air, and hydrogen, which is retained.

The hydrogen reacts with CO2 extracted from the atmosphere to form methane, which is then routed into the European gas grid. Any CNG-powered machine, from our test A5 through the Napa Valley Wine Train to a stove on a sailboat, can run on Audi’s e-gas.

The g-tron looks exactly like a garden-variety A5, with the exception of a small emblem at the bottom right side of the trunk lid.

There’s no extra fuel door to show it’s capable of moving without burning gasoline, nor does it have slabs of shiny blue trim to announce it goes easy on the ozone layer. “Make it low-key” was the order to designers.

The story is the same inside, where it’s standard A5 all the way. As you’d expect from an Audi, the seats are comfortably firm, the fit and finish are excellent, and the overall design exudes understated sportiness.

When the CNG tank is empty, the engine-management software automatically switches to gasoline.

While the g-tron isn’t the least powerful car in the European A5 lineup, its power-to-weight ratio is one of the worst. We never assumed it would keep up with a RS 5, but on the road, it’s noticeably slower than the gasoline-only 2.0-liter version.

Acceleration remains brisk, and the engine is surprisingly eager to explore the top half of its rev range—meaning the A5’s performance genes are muted but still dominant.

The only signals to hint the turbo-4 is running on CNG are that it’s a little louder than normal, and it feels like it’s working harder to deliver power. It's far from the forklift feel of older, more primitive CNG conversions, though.

At speed, the g-tron behaves like a standard gasoline or diesel A5 Sportback. It’s on the comfortable side of dynamic, with precise, well-weighted steering and a playful chassis.

The suspension strikes a balance between supple and firm to provide buttoned-down handling without hammering occupants one pothole at a time. The driver can choose among several driving modes, including Dynamic and Comfort.

The CNG-powered model weighs 220 pounds more than the regular A5 Sportback, which certainly doesn’t help performance. Most of the extra pounds are in its rump, so the tradeoff is that the CNG tanks actually improve handling by adding more mass over the rear axle, which evens out the car’s weight distribution.

We noticed it because our drive took place at Bosch’s proving grounds in Boxberg, Germany, and included time on a fast-paced test track. You likely won’t sense the difference if you’re simply driving on short trips around town.

The optional navigation system should be considered a necessity in a car like the A5 g-tron. We'd suggest it should be included as standard to reward motorists who take a leap of faith and live with a CNG-powered car.

Audi has added an extra function to its MMI interface that lets the driver search for the nearest CNG station. Many electric cars offer a similar function to help drivers locate nearby charging stations, which are often not signposted.

While the number of electric-car charging stations grows each year, finding a public CNG station largely depends on where you are.

The navigation system discovered a surprising number of stations within 20 miles of our Boxberg, Germany, test—but in other parts of the world, trying to find a public natural-gas fueling station is a disheartening endeavor.

With only 950 public natural-gas fueling stations in the U.S., it can be viewed as akin to looking for a needle in a haystack, with your hands tied behind your back, while blindfolded.

As a technology demonstrator, the Audi A5 g-tron proves alternatives to traditional fossil fuels can take on many forms.

This one stands out with grin-inducing handling, quick refueling, impressive range, and CO2 emissions as low as those of the smallest, thriftiest subcompact sold in Europe.

But unless the CNG infrastructure improves drastically, Audi's g-tron will remain little more than a stopgap technology niche on the path towards battery- or hydrogen-powered cars with no tailpipe emissions at all.

EDITOR'S NOTE: An earlier version of this story said that the U.S. had only 500 publicly accessible natural-gas fueling stations, but as reader "Carney3" points out, the correct number is 950 per the U.S. Department of Energy. We have updated the story and apologize for the error.