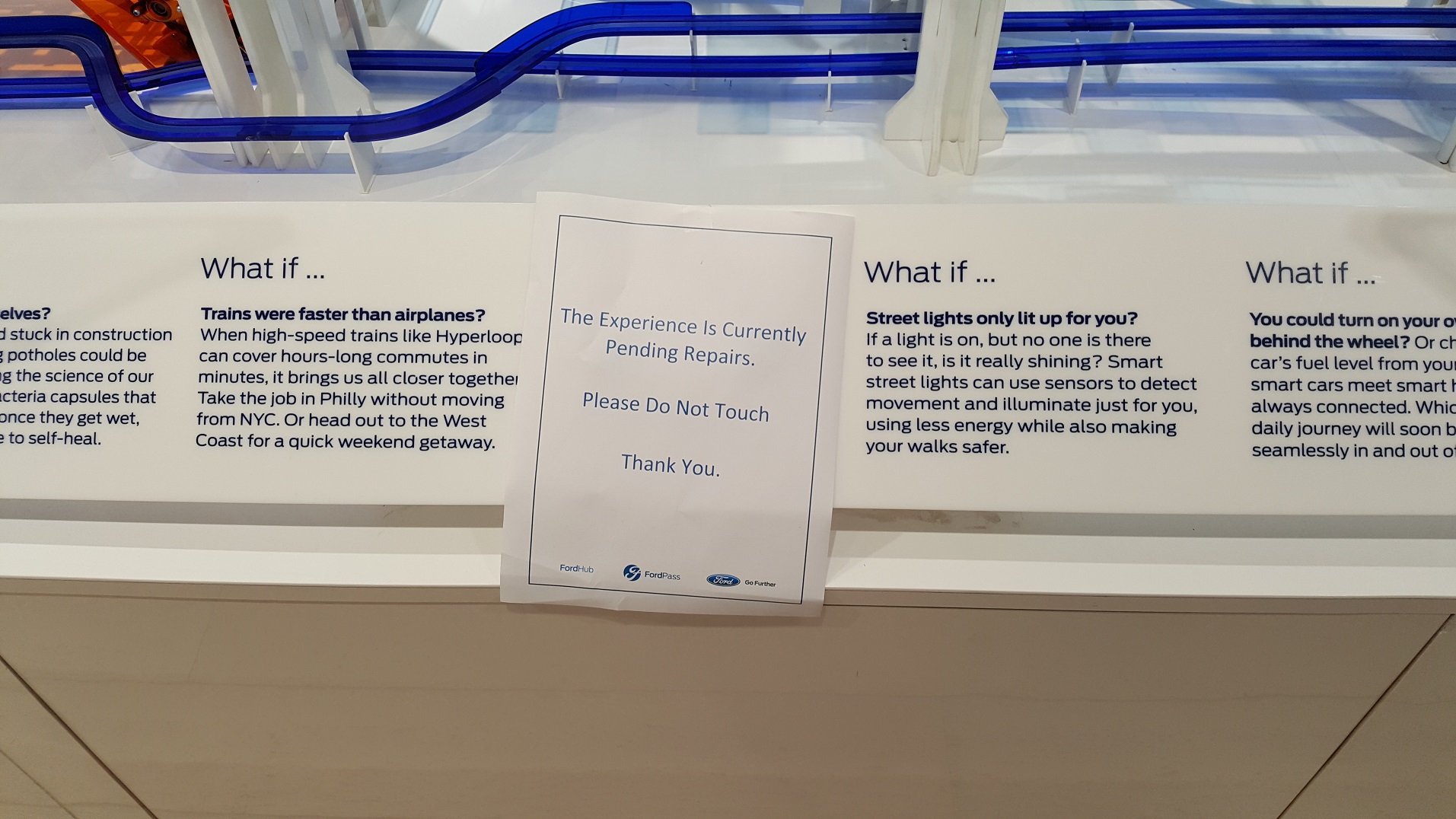 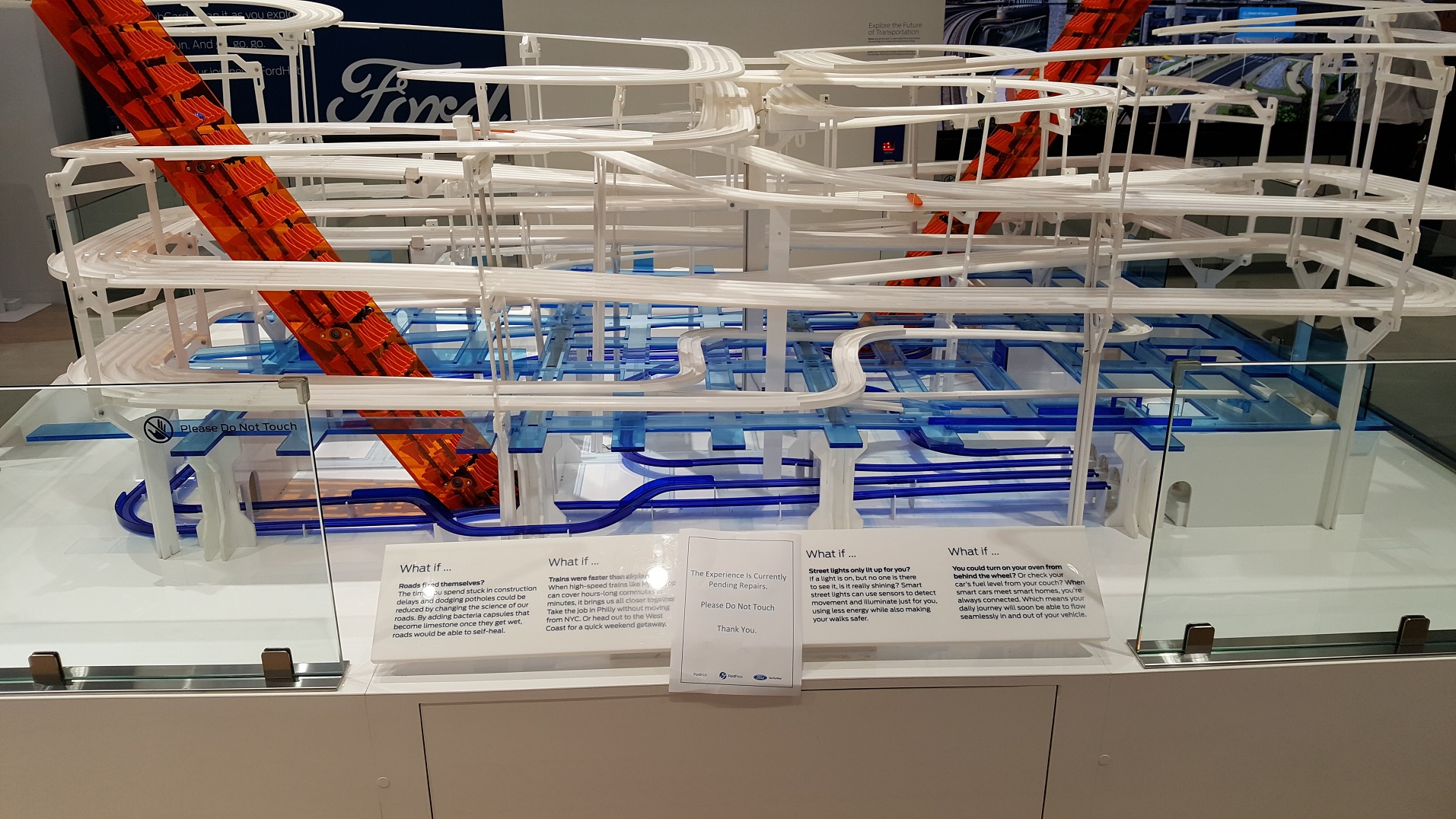 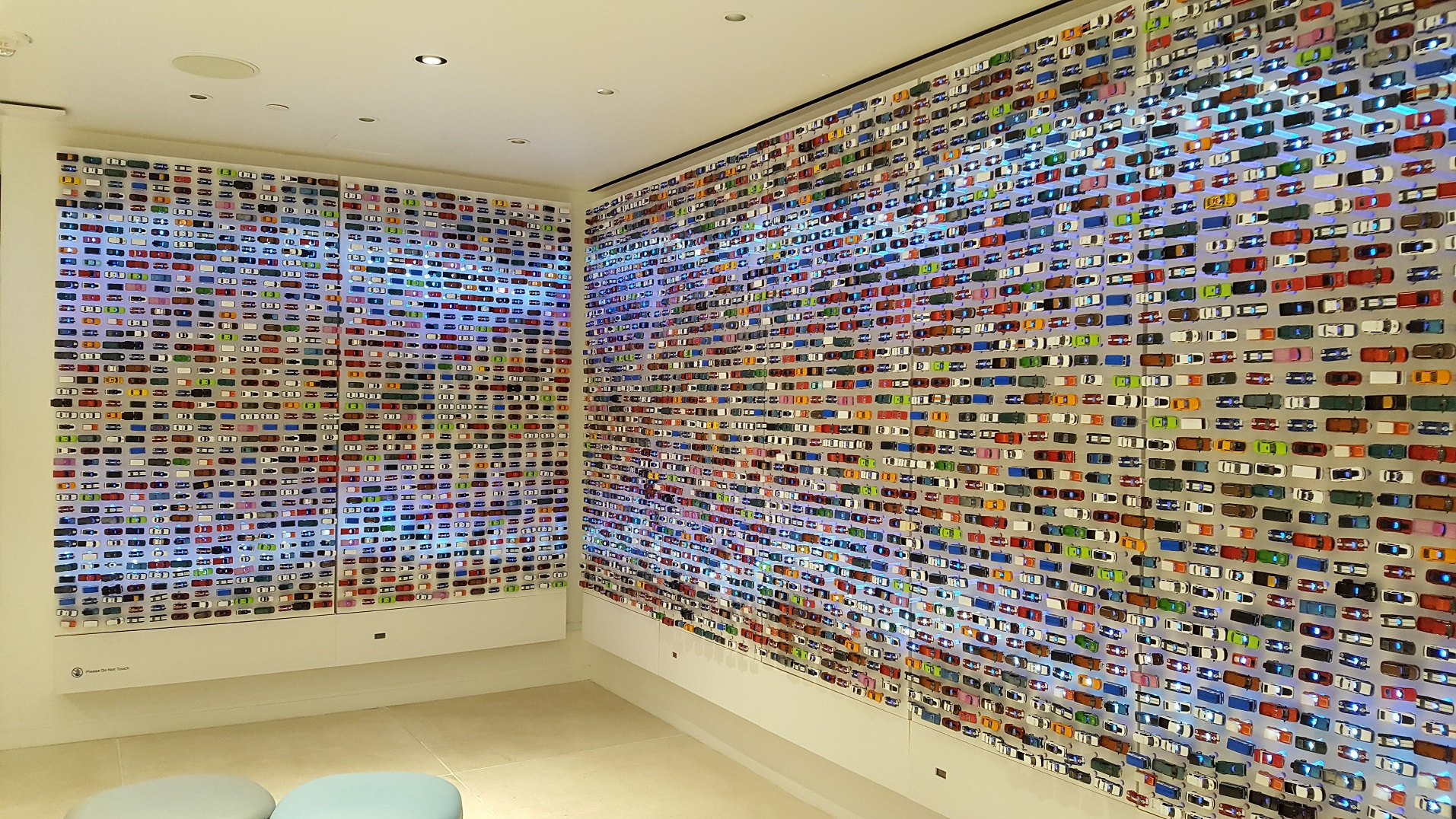 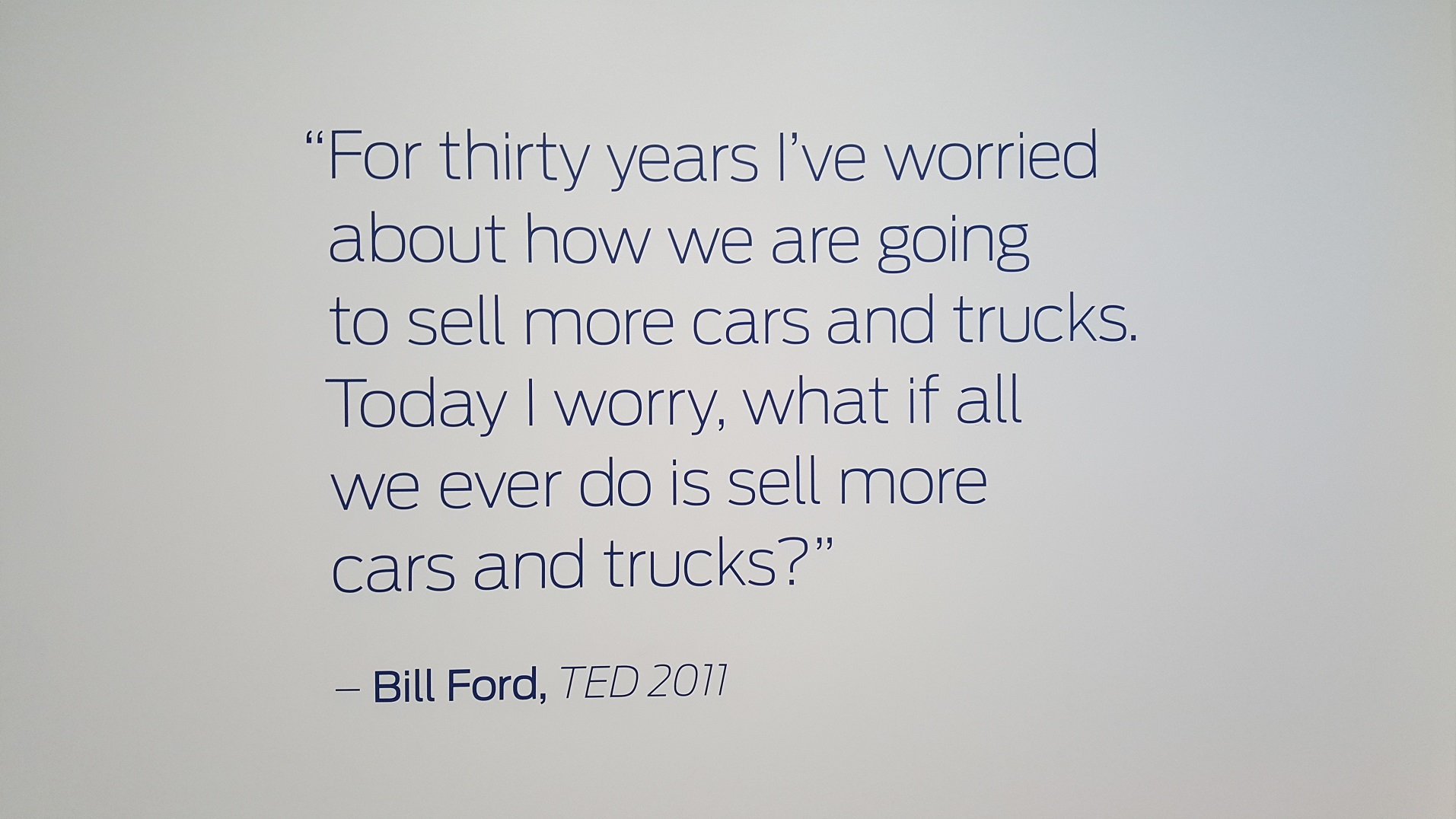 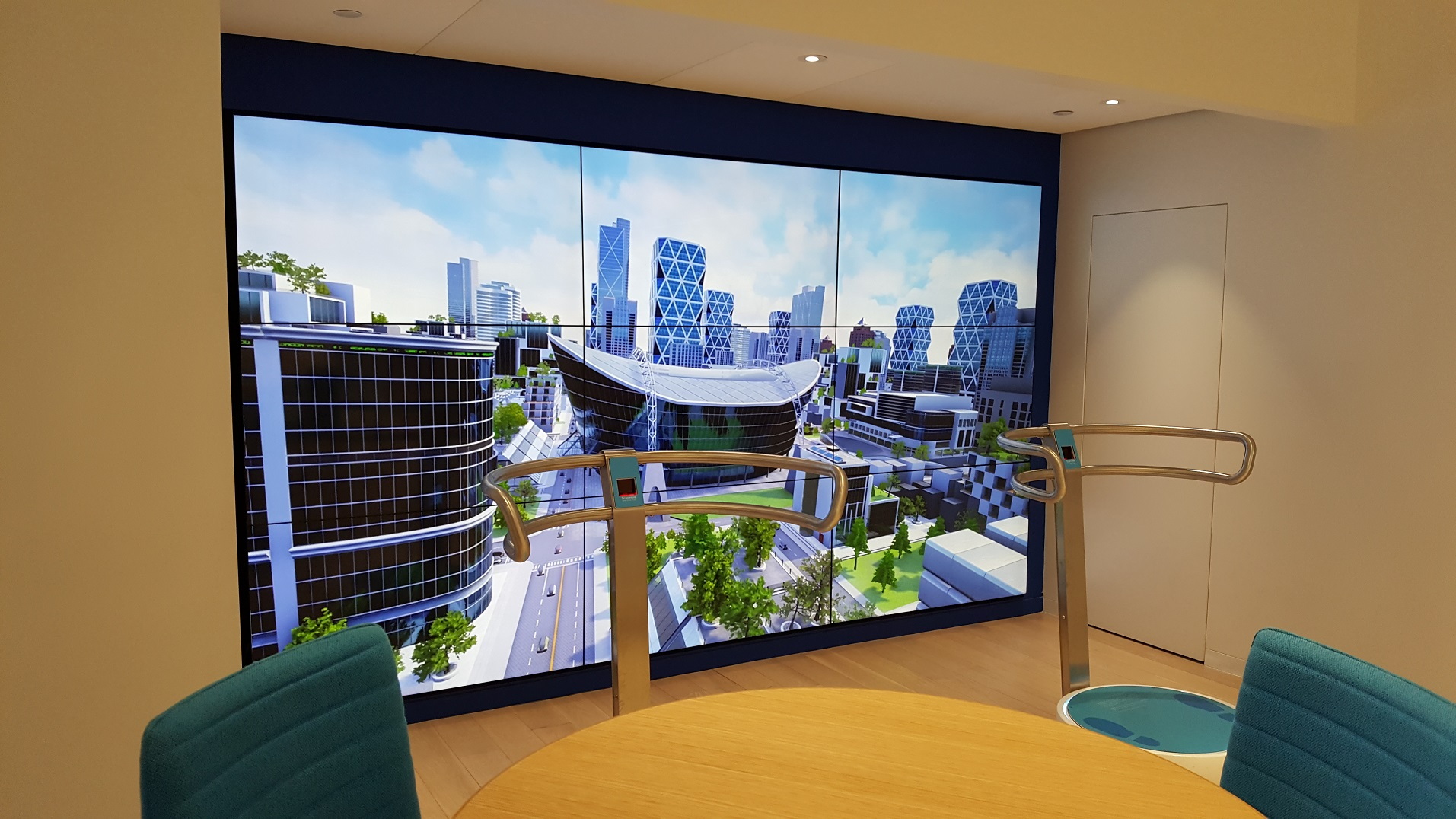 Those who've lived in New York City since 2001 sometimes choose to avoid the World Trade Center site when possible.

The area has largely been rebuilt into a combination of offices, shopping, and the 9/11 Memorial and Museum, with construction on some very tall towers still ongoing.

A lunch date with a friend prompted us to wander into the Ford Hub, open since January off the stunning oval "oculus" that's the focal point of a Westfield shopping mall on top of a transit station.

We wanted to experience Ford's space the way other tourists we observed did: seeing the Ford name, being intrigued by the bright lights, and walking through the doors.

The first thing we noticed: it has no cars, if you ignore a few hundred tiny model Fords mounted on a back wall in rows.

The second thing was that the focal point of the space directly through the doors—an elaborate multi-level plexiglass model, with ramps and slides and a series of "What If?" questions around it—wasn't working. It was "currently pending repairs," as signs indicated.

A friendly staffer, called a FordGuide, greeted us and encouraged us to view the displays, play with the various interactive games, and sign up for Chariot, a Ford-branded shuttle service called via phone app.

For downloading the Chariot app, each of us received a thick white ballpoint pen that's also a battery charger and stylus.

What was missing—and we asked—was a single-sentence response to the question, "So, what is this place, exactly?"

For that, we later turned to the January 31 press release announcing the opening of the Ford Hub space.

It is, Ford said, an "interactive brand experience studio" that's an effort to connect with consumers—"some who have never done business with the company before"—that invites them to "explore, experiment, and learn how the company is rethinking the future of transportation."

Elena Ford, the company's vice president of global dealer and consumer experience, noted in the release that it's not "a store or a dealer" but a place for "participation and creativity."

Ford hopes visitors will "have fun while engaging in conversation about the future of transportation." Elena Ford explains, “We want consumers to ... be part of creating the world’s mobility solutions."

Among the display is a mobility map for New York City, with tweets and schedules covering commuter trains, ferries, and other transport modes.

Further to the rear, visitors can stand on "wobbleboards" and race through a futuristic world using various types of mobility, from electric bikes to self-driving cars, to earn points for each "mobility decision" they make.

At the very back, a virtual-reality experience lets players build a Mustang on a top story of the Empire State Building, duplicating a publicity stunt from a couple of years ago, while their friends watch the car come together.

We're not sure "mobility" is a word that's penetrated the awareness of average American consumers, nor whether the games and information on display will succeed in "encouraging imagination and dialogue" in between visits to the high-end mall stores the Westfield space is populated with.

Ford says the space will evolve over time, as the company collaborates with "communities, thought leaders, artists, and others" on new programs and interactive displays.

We walked away with a Ford "HubCard" that let us download a "Self-Driving Selfie" that showed how we would appear to a self-driving car viewing us through its sensors.

In the end, we have to wonder whether having a shiny car on display—a la Tesla Stores, perhaps?—might have let the whole experience make a little more sense.

As it was, we were left scratching our heads.

Perhaps that might be a good place to start?