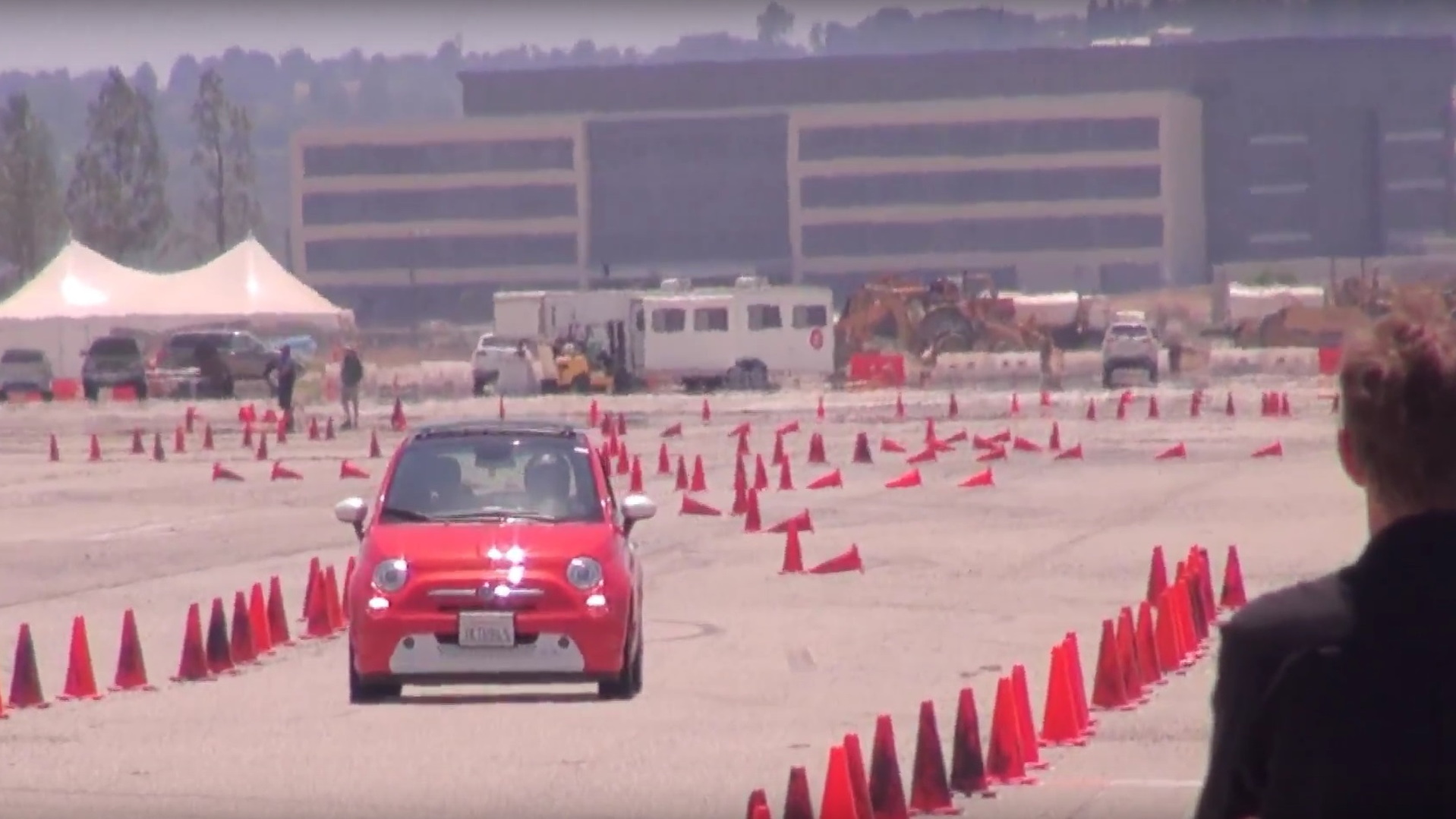 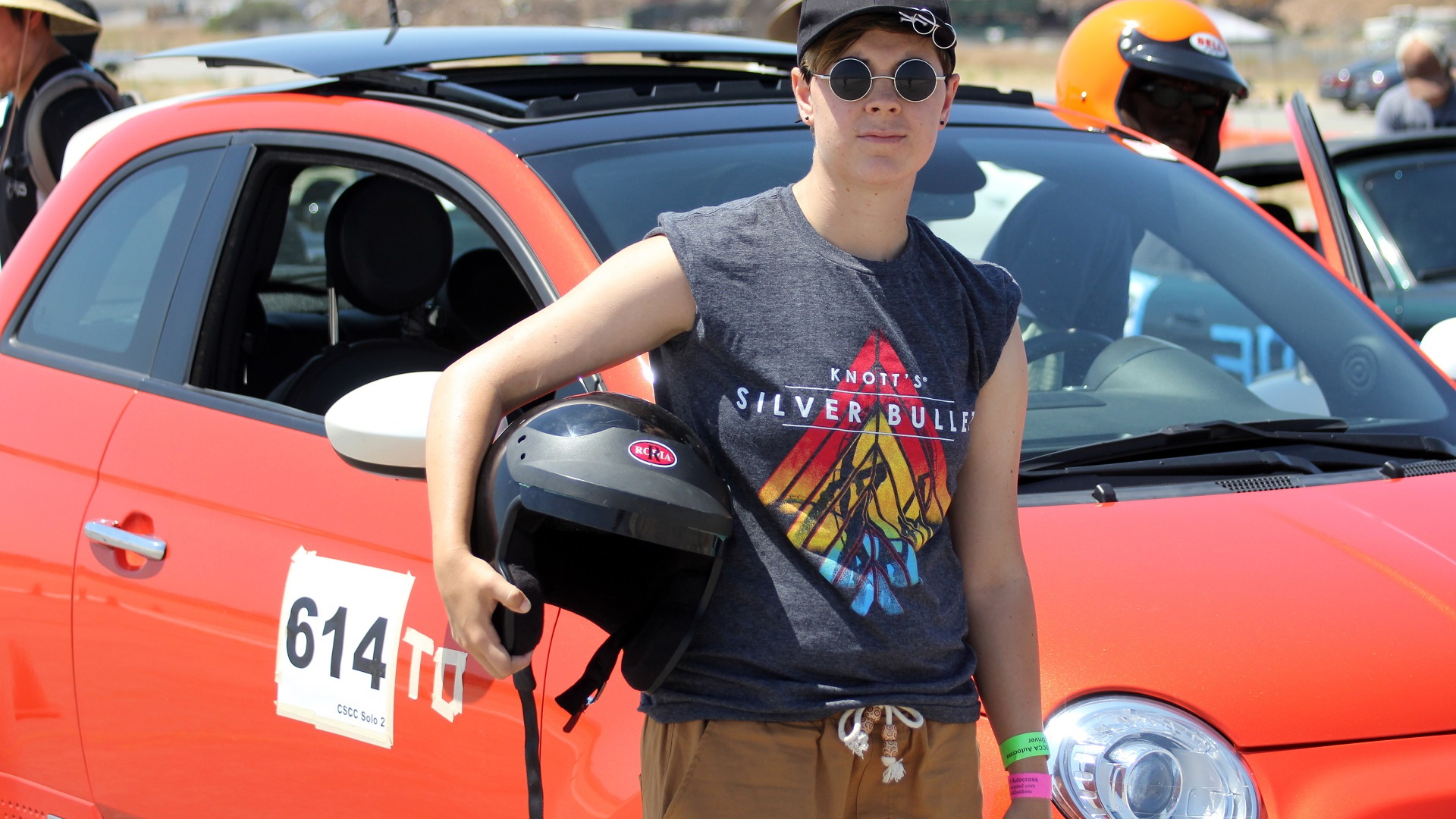 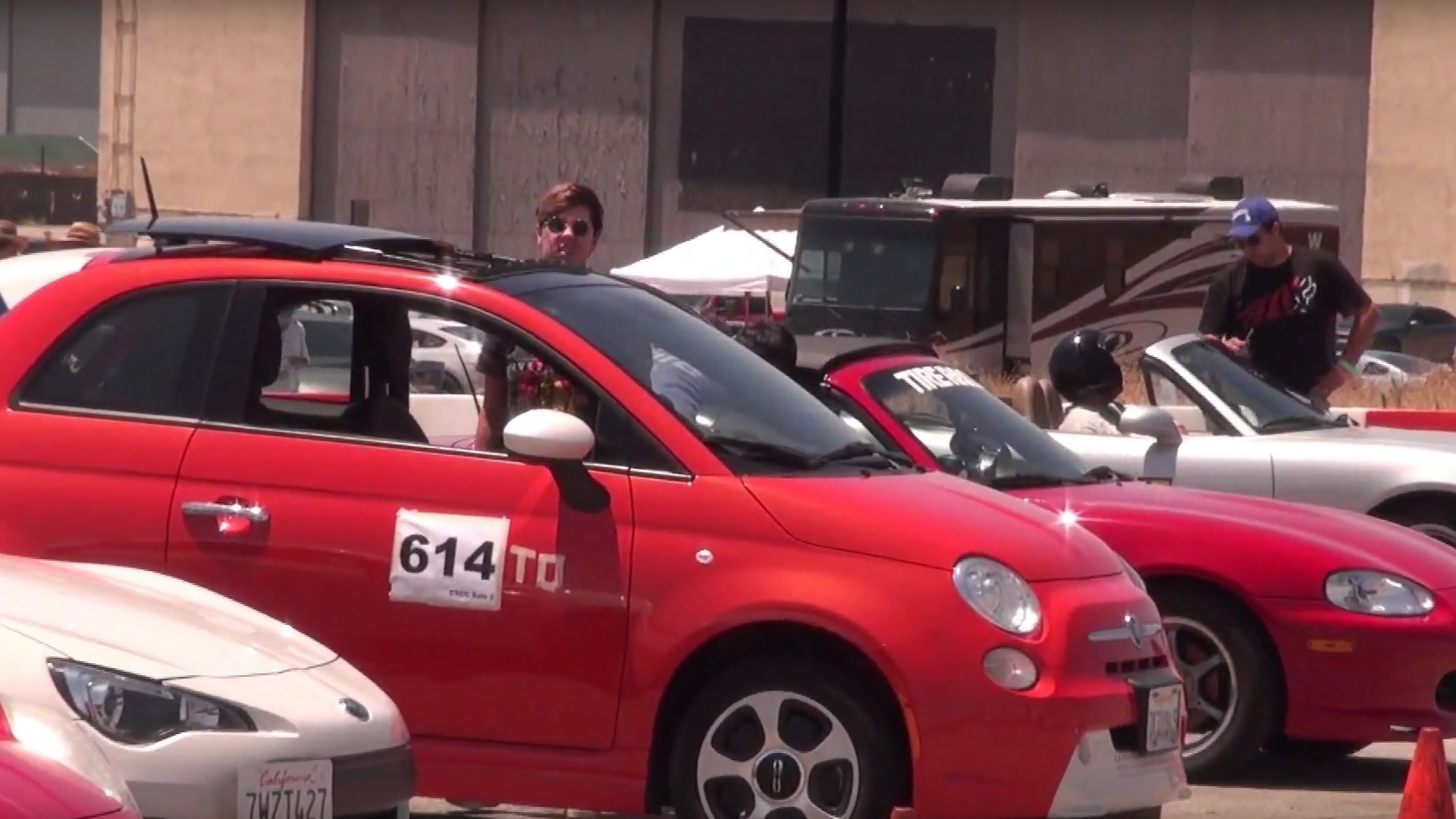 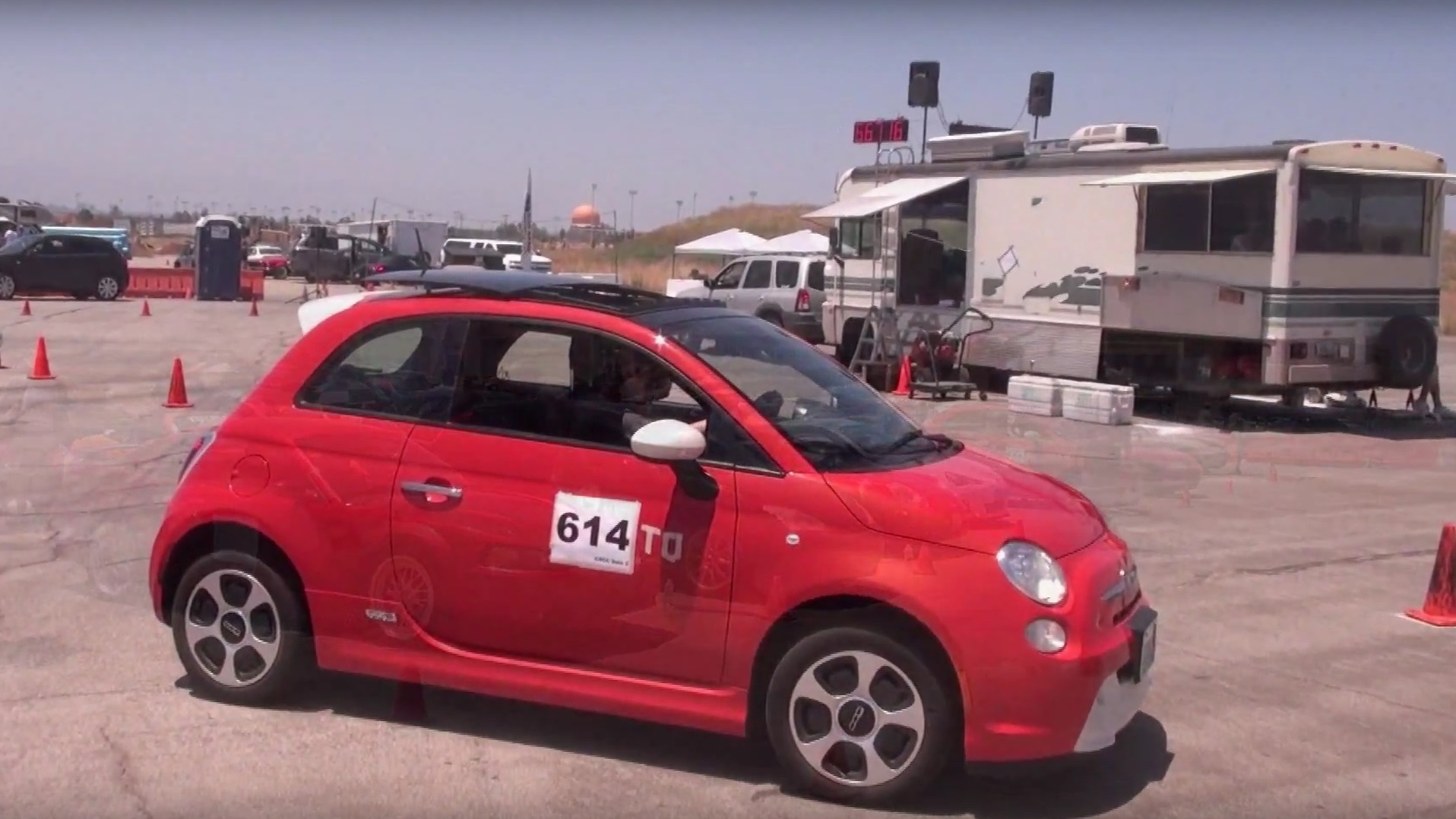 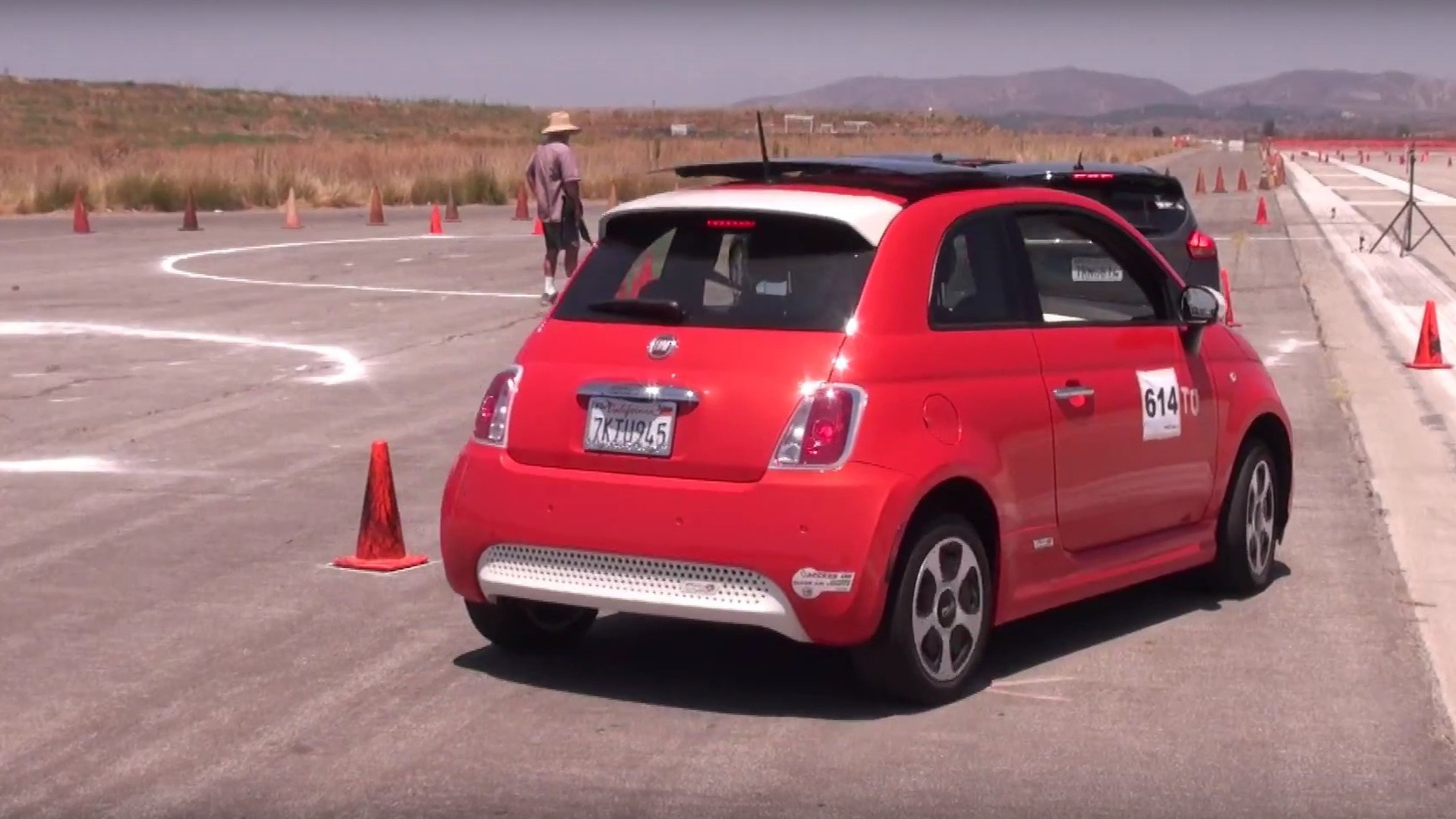 When we published an article on one owner's experience using his Chevrolet Bolt EV electric car to compete in a local autocross, it contained a comment that riled up our reader Doug Kerr.

That comment—"Outside of one high-performance electric vehicle, casual electric cars are hardly the racer’s choice"—prompted Kerr to take the family's Fiat 500e to the nearest autocross, driven by his daughter Andrea.

What follows are Kerr's words, lightly edited by Green Car Reports for clarity and style.

DON'T MISS: Chevy Bolt EV electric car does many things: autocrossing is one

I talked my daughter, Andrea, into autocrossing her 2015 Fiat 500e, an entirely electric vehicle to see how she did against the “racer’s choice.”

Because the event was officially sanctioned by the Sports Car Club of America (SCCA), the car needed to be properly classified beforehand. Here we ran into our first obstacle.

The Fiat 500e has not been classified by the SCCA. The base 500 is excluded because of its rollover risk, but the 500 Abarth, a higher performance Fiat, is allowed.

As most people know, electric cars have a heavy battery at the very bottom of the car. The 500e's 600-plus-pound battery sits under the floorboards, making its rollover possibility very slight.

But according to everything I read, the 500e didn’t get approved because many electric cars tend to have a higher ride height to provide additional suspension clearance given their heavy batteries.

Interestingly, the autocross event manager told me that the Bolt had recently been excluded as not meeting the measurements; the Nissan Leaf has not been classified.

In the end, we just showed up at the autocross at the former El Toro Marine base in Irvine, California, now Great Park, that was put on by Southern California's SCCA chapter, Cal Club. One runway remains and hasn't been bulldozed.

The event manager and the rules-safety officer were immediately called in to determine if this unclassified car had any business autocrossing. They took some measurements—and figured that the 500e was close enough.

Truly, I think they were smart enough to figure out that a 600-pound battery would not allow a small car to roll.

We proceeded to the tech inspection, and Andrea received her car number. By the time we had cleared all the issues, Andrea had missed one-half of the course walkthough.

This is important, because there are no practice laps: you get four tries, and your best time determines how well you place.

Andrea signed up as a novice along with 30 other drivers. This classification provides an instructor who drives your car around the course with you as a passenger, showing you the best line and braking points.

As Andrea headed to the lineup with her car, the announcer noticed her brilliant, traffic-cone orange car. In his Australian accent, he called out that there was an electric car coming up.

This reminded him of his niece who had come to the course awhile back in her electric car.

She made it to the park, and all she did was watch the event, but wasn’t sure she could make it back to Santa Margarita without running out of power. That’s called “range anxiety” he opined to everyone within 2 miles. I barely resisted the urge to grab his mic.

Near the start, another group surrounded the 500e, which Andrea has named “Nemo.”

This time, the event manager told the instructor about the unclassified EV he would be piloting around the course. He told him that it was his decision.

Should the instructor believe the car to be a safety hazard, he could pull it from the line, and that would be the end.

Then a fellow who informed the crowd that he was a former technician at the local Fiat store told us he preferred the handling of the 500e to that of the 500 Abarth.

The instructor said he had no problem with driving the car, and Andrea hopped into the passenger’s seat.

As the expert sat next to Andrea, he looked quizzically at the controls, “How do you shift this thing?” The Fiat technician leaned in and said, “Use the push buttons. Like a video game.”

Then the instructor began to ask Andrea questions, “How does the accelerator work, is it really touchy? Do the brakes grab? How is the handling?”

Andrea explained that the 500e acts pretty much like any gasoline car, but it had instant acceleration. He said, “What?”

Then reached into his helmet and removed his earplugs. “I guess I won’t be needing these” he said with a smile.

As they raced around the course, Andrea could tell the instructor gained more and more confidence in the car. He threw it into turns and sailed through the slalom.

At one point, as they exited a turn, he said the tires have no traction. “This car would be really fast if it didn’t have skinny eco tires on it.”

As he was leaving the car, he exclaimed, “That was fun! I went slow at first, because I didn’t know anything about the car.” As the time flashed on the scoreboard, it turned out that even with his hesitant start, he would have placed among the top 10 of the class.

The instructor later discussed his views on the positive aspects of how the 500e handles. He called it a very neutral-handling car with very tight roll control. The instant torque rivaled much faster cars—and he thought the 500e was pure fun.

Andie had four course runs; her second was her fastest.

The event manager accompanied her on her first run. Obviously, he wasn’t concerned about the 500e flipping over. He told me that it was too bad, but this weekend might be the last for the 500e.

Under SCCA rules, they were required to inquire to national headquarters about running an unclassified car. It seemed probable the SCCA would not approve the 500e, based on its similar specifications to the base 500.

Andrea and I enjoyed our first, and perhaps only, autocrossing event. I would have liked to try my hand at the autocross; I had raced my Corvette back in 1990 at the old Riverside raceway.

I won the timed events and was awarded an introduction to open-wheel racing. While I've participated in events with Porsche, BMW, and Mercedes-Benz, when I got to take their new cars around short autocross courses, I'd never been to an actual SCCA event.

Maybe once I have my Tesla Model 3, I can come back and embarrass a few more BMWs.

Andrea placed 21 out of the 30 entrants in her class. She beat a Ford Mustang Cobra, a Dodge Charger, an Infiniti G35, two BMWs, a Mini Cooper, a Mazda Miata, a Mini, and of all things, a 1959 Austin-Healey Sprite.

I would be remiss if I didn’t thank members of the Cal Club SCCA team. Their all-volunteer force was helpful, considerate, and welcoming beyond what I would have expected: Cal Club has a truly professional organization.

Our thanks also to event manager, Randy Gonzalez and his entire crew.