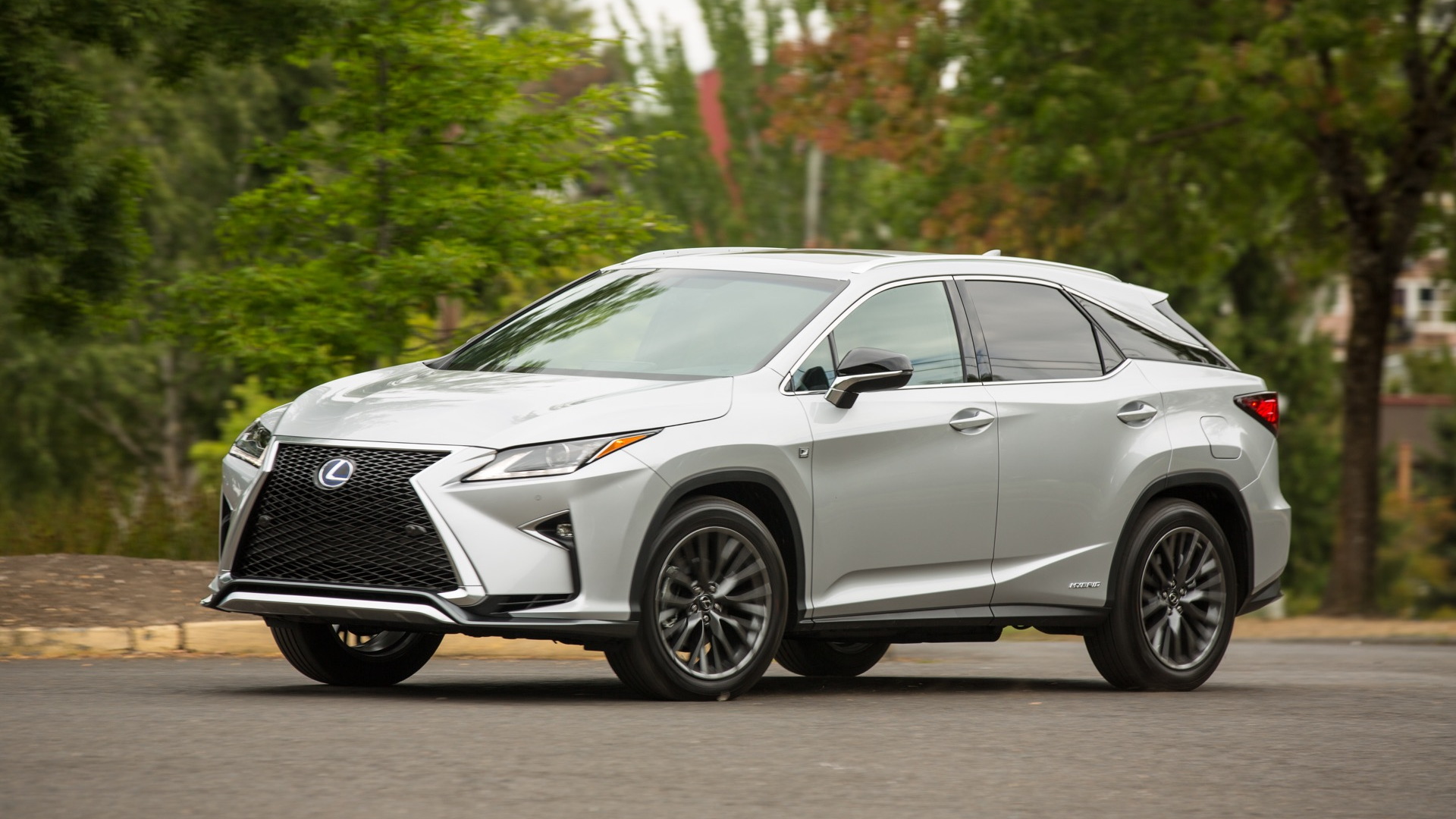 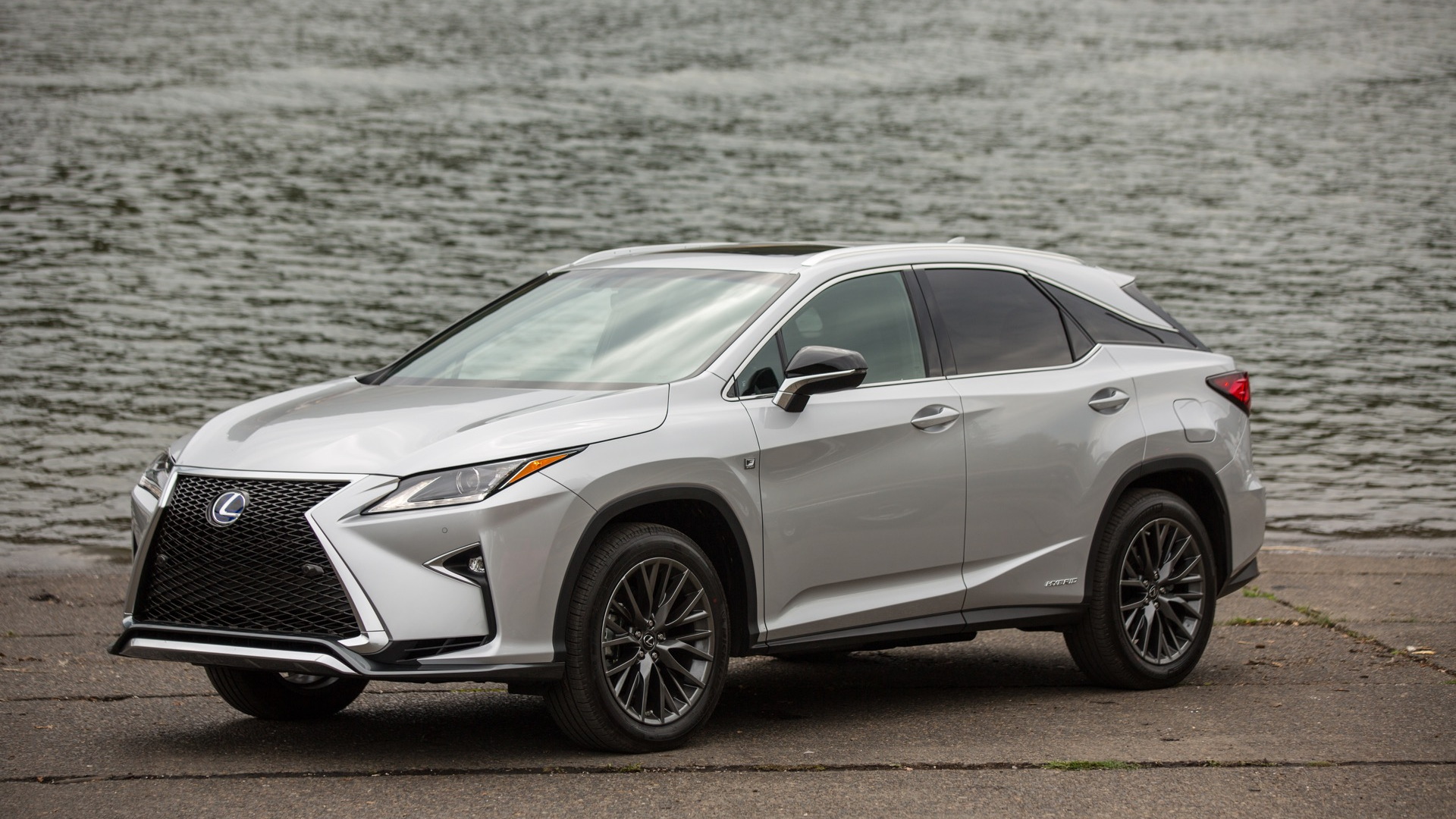 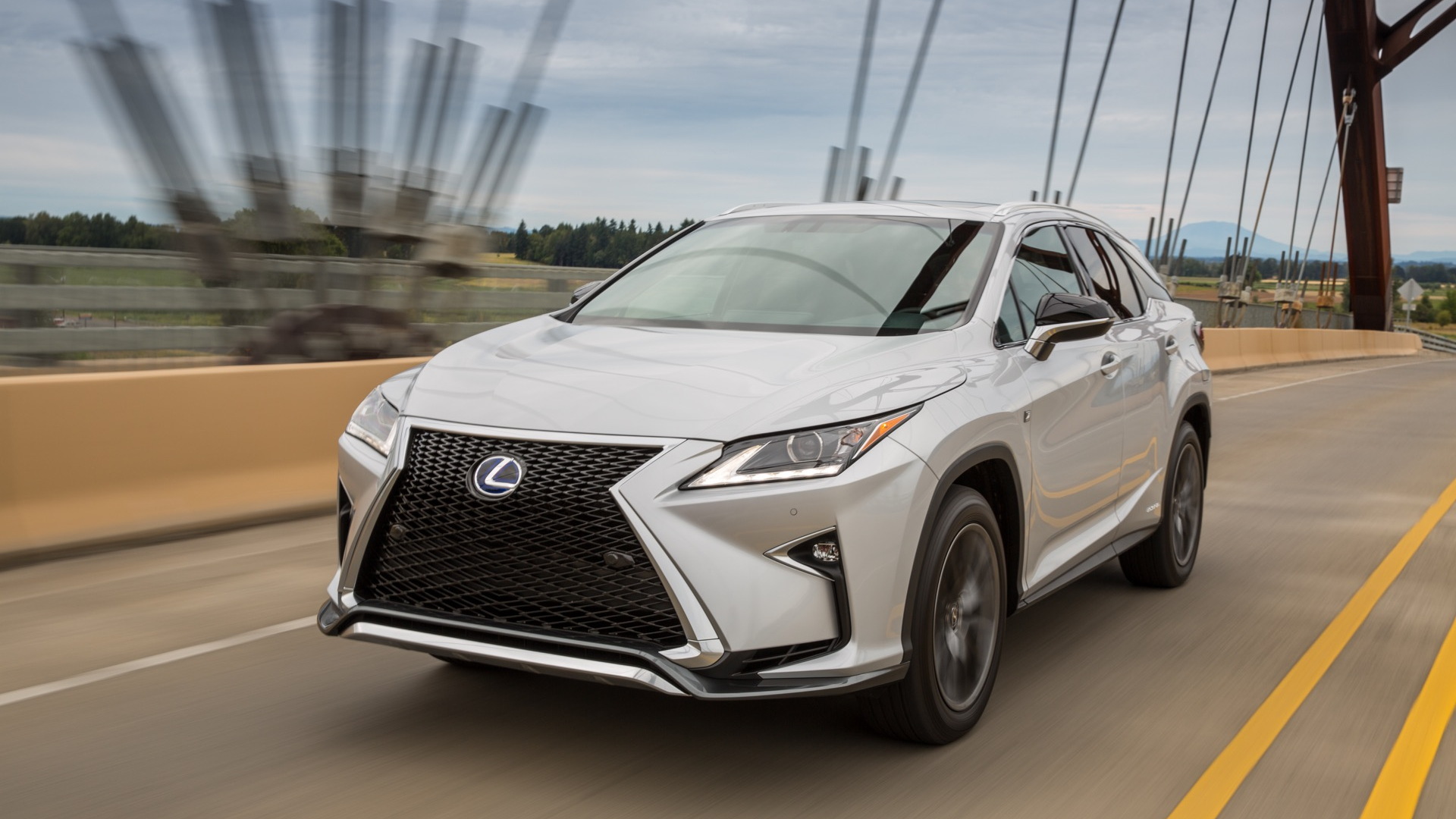 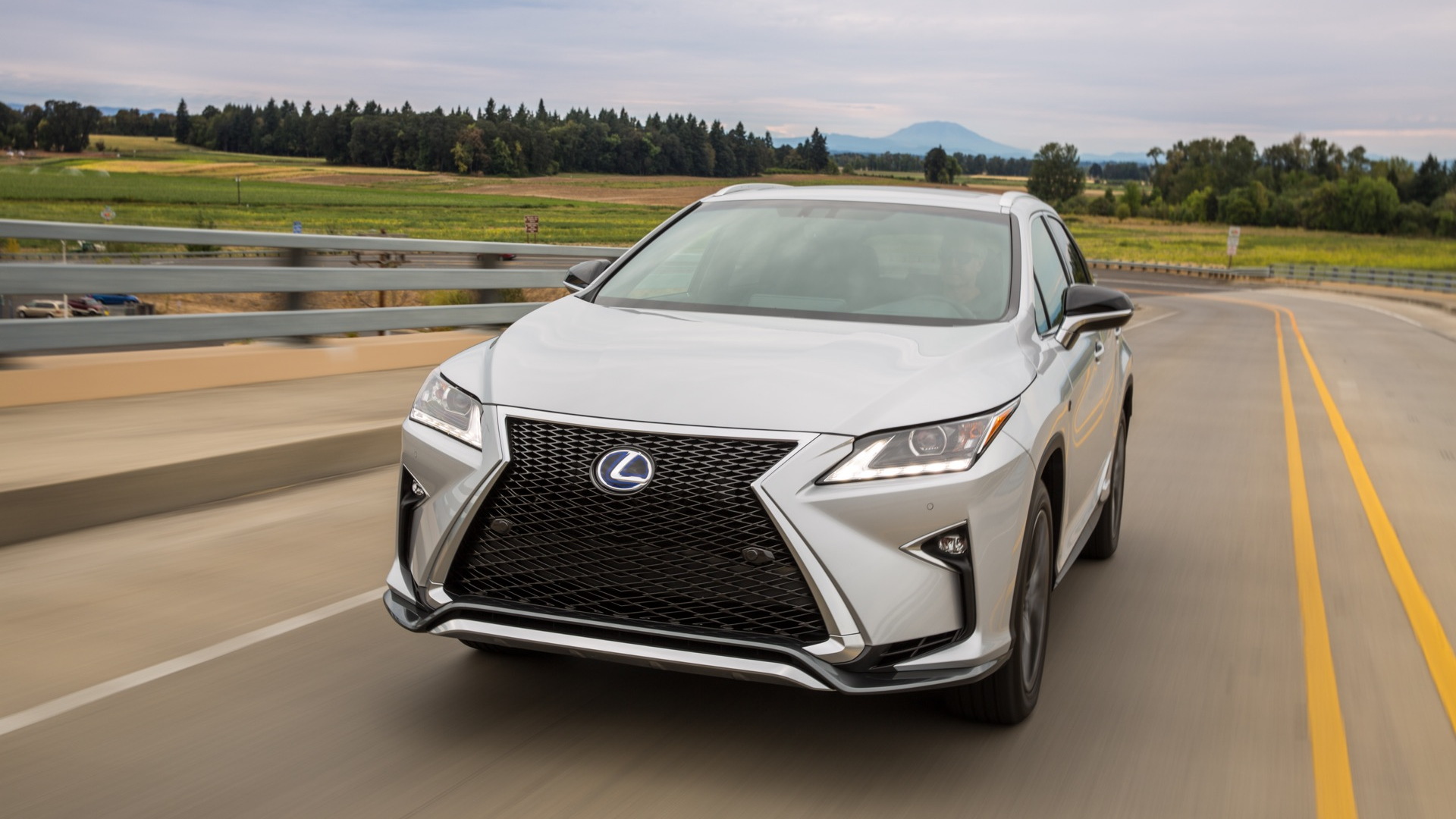 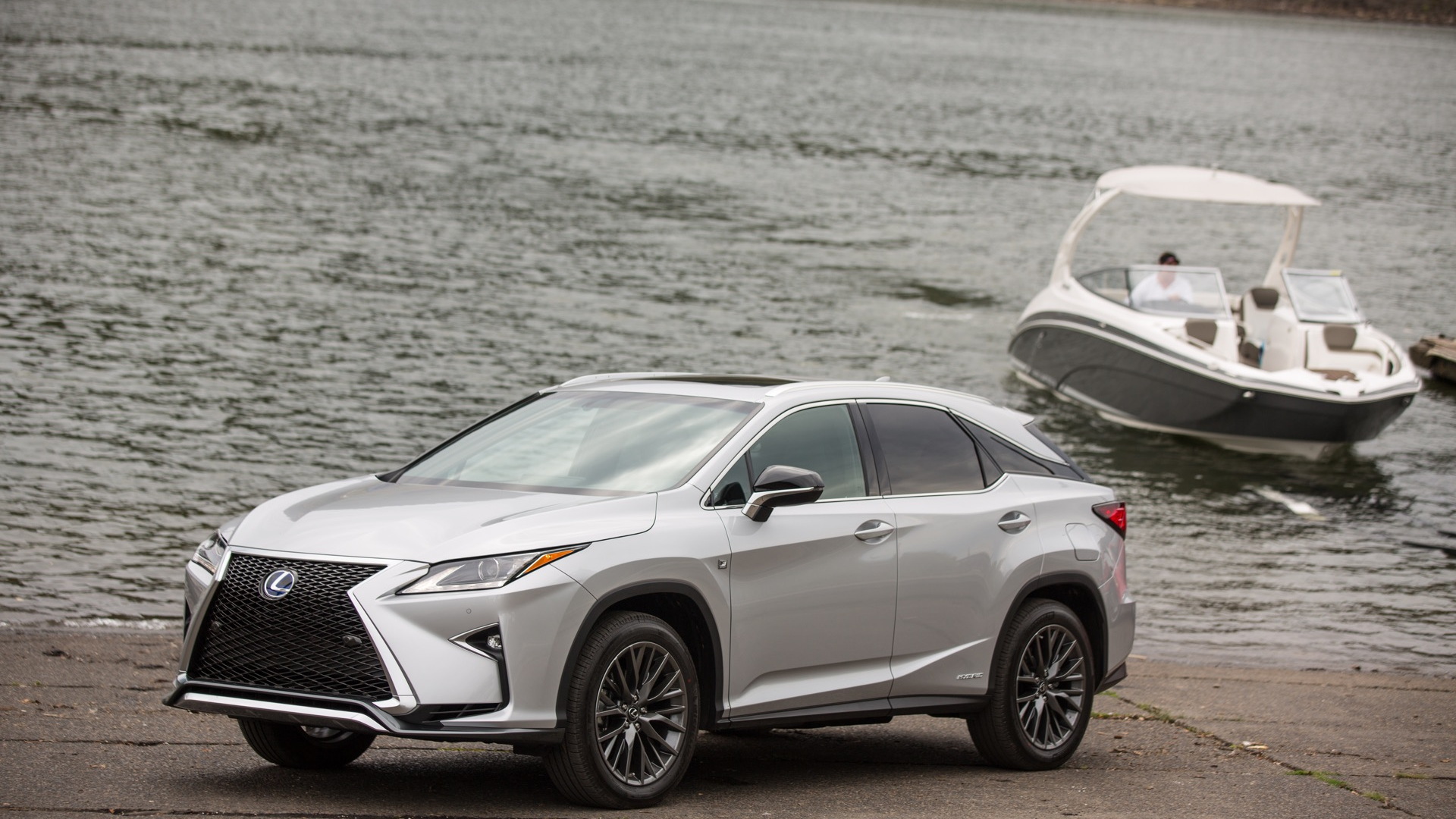 The Lexus RX luxury crossover—and particularly the RX 450h hybrid version—has always been an image vehicle. But now, for 2016, the RX lineup finally gets an image that says something other than pragmatic, fiscally responsible luxury.

It’s no surprise why this vehicle is the longtime best-selling luxury crossover of its class (think BMW X5, Acura MDX, and Lincoln MKX, among many) for upscale realtors, business people, and empty-nesters, as its combination of interior comfort, a high seating point (for easy entry and exit), and fuel-efficient powertrains—plus the Lexus badge and the high resale values that go with it—have added up to a smart (albeit predictable) pick.

With predictability thrown to the wayside for a new design for the RX that throws out the jellybean look in favor of a design that may be tough to take in at first glance, but as a sum, is a very expressive one.

After seeing this model on auto show floors, in pictures, and in a day of driving, we’ve warmed to the look; compared to some of its lookalike peers, it impresses as engaging and alive—technical and organic, yet teasing odd influences of the SUV designs the RX has always eschewed.

The design is at its best in F Sport guise, where the horizontally slotted grille gets replaced with a black mesh-look (crosshatched) grille, plus big 20-inch wheels with a dark metallic finish.

Yes, a sport model of the RX Hybrid

For the first time, the RX 450h hybrid will be offered in F Sport guise, which means that it upgrades to an Adaptive Variable Suspension (and a stiffer suspension tune in general), deeply bolstered sport seats, and various trim and appearance changes inside.

In the 2016 RX 450h, a 3.5-liter direct-injection V-6 engine, rated at 259 horsepower and 247 pound-feet of torque, is supplemented by a two-motor system, as part of Toyota’s familiar Hybrid Synergy Drive, using planetary gearing for the power split and to replace a traditional transmission. The main traction motor of that system is is rated at 123 kW (165 hp).

Then in all-wheel-drive versions of the RX 450h, a separate 50-kW (67-hp) motor-generator unit is installed for the rear wheels, making this version an over-the-road hybrid in some respects.

Front-wheel-drive versions of the 2016 RX 450h can get to 60 mph in 7.5 seconds, while AWD versions aren’t far behind, at 7.9 seconds. The hybrid powertrain, altogether, makes 308 horsepower in either setup. That’s because the battery capacity remains the same 2 kWh.

While final EPA fuel economy ratings for the RX lineup aren’t yet out, Lexus anticipates ratings of 31 mpg city, 30 highway for the front-wheel-drive versions and 30/28 mpg with AWD. In a very short drive, keeping an eye on trip computer and efficiency displays, we were reminded how this system rewards mindful driving and gentle inputs.

That is, of course, a bit at odds with the new F Sport presentation.

All RX models now include a drive-mode selector that lets you choose between Eco and Normal driving modes; but F Sport models add Sport S, Sport S+, and Customized modes. In the Sport modes, the gauge cluster of the 450h transforms from a blue power-flow gauge to a read-themed layout featuring a tachometer.

As we experienced this past week in a driving loop, taking the RX450h on some particularly challenging curvy roads near Portland, Oregon, the new presentation isn’t entirely on par with sport sedans. The RX 450h’s planetary gearset and lack of defined gears are part of what makes this setup feel less convincing in F Sport guise. You can also click steering-wheel paddle-shifters, although even then the transmission doesn’t seem to hold ratios with any predictability.

We like the tune of the F Sport, too; it no longer feels like a vehicle that’s saddled with weak-kneed, somewhat queasy handling in the name of pillowy ride comfort.

Comfort is a strength for the latest RX, as it’s always been, while back-seat space for the RX 450h remains a bit different than that of its non-hybrid counterpart, the RX 350. Lexus has changed the seating angle slightly, and worked to make the seat comfort better, yet you still sit an inch or two higher on it—which means that it’s still spacious. But you’ll want to check headroom with your lankiest friend.

DON'T MISS: Russia Decrees: Every Gas Station Must Have Electric-Car Charging Too

It’s a bit surprising that the RX family doesn’t sacrifice any significant space or usability for its more adventurous sheetmetal, and that thanks to thinner pillars (enabled by the expanded use of high-tensile-strength steels), outward visbility actually seems to have improved.

Altogether, the 2016 Lexus RX 450h is one of the most fuel-efficient luxury crossovers on the market. Especially if you do mostly city or suburban driving—and for whatever reason are planning to skip past the few plug-in hybrid models on the way—in F Sport guise its a compelling (and far more eye-catching) RX.

Full pricing hasn’t yet been announced; the new RX models go on sale later this year.