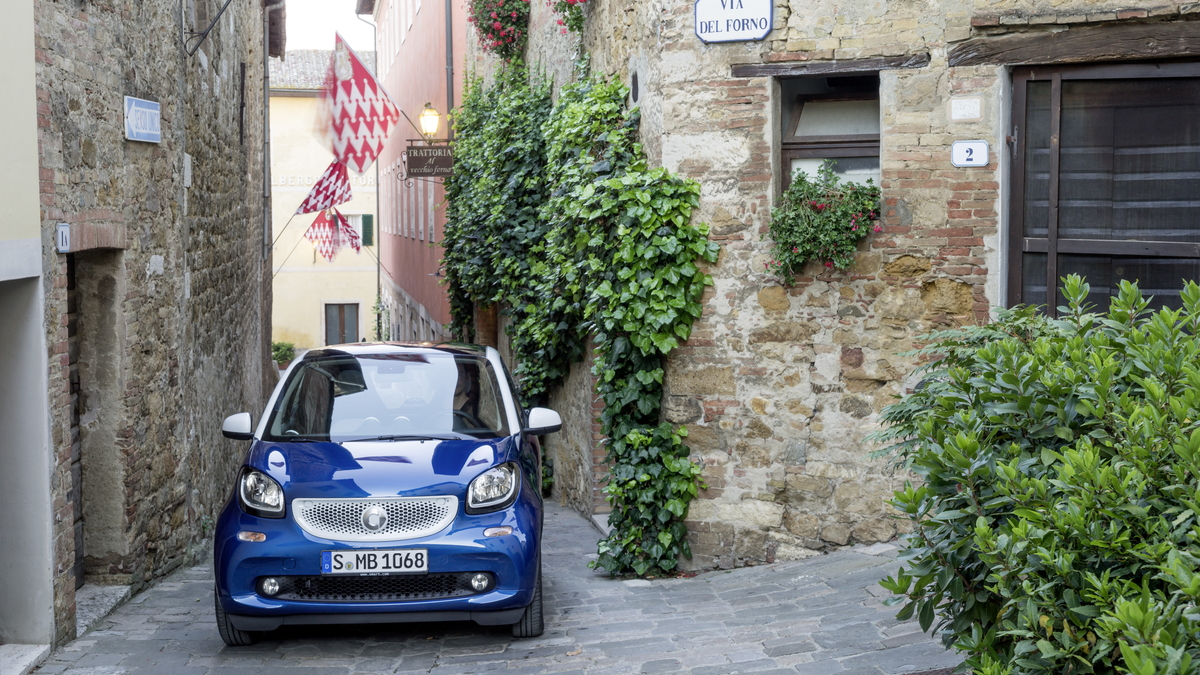 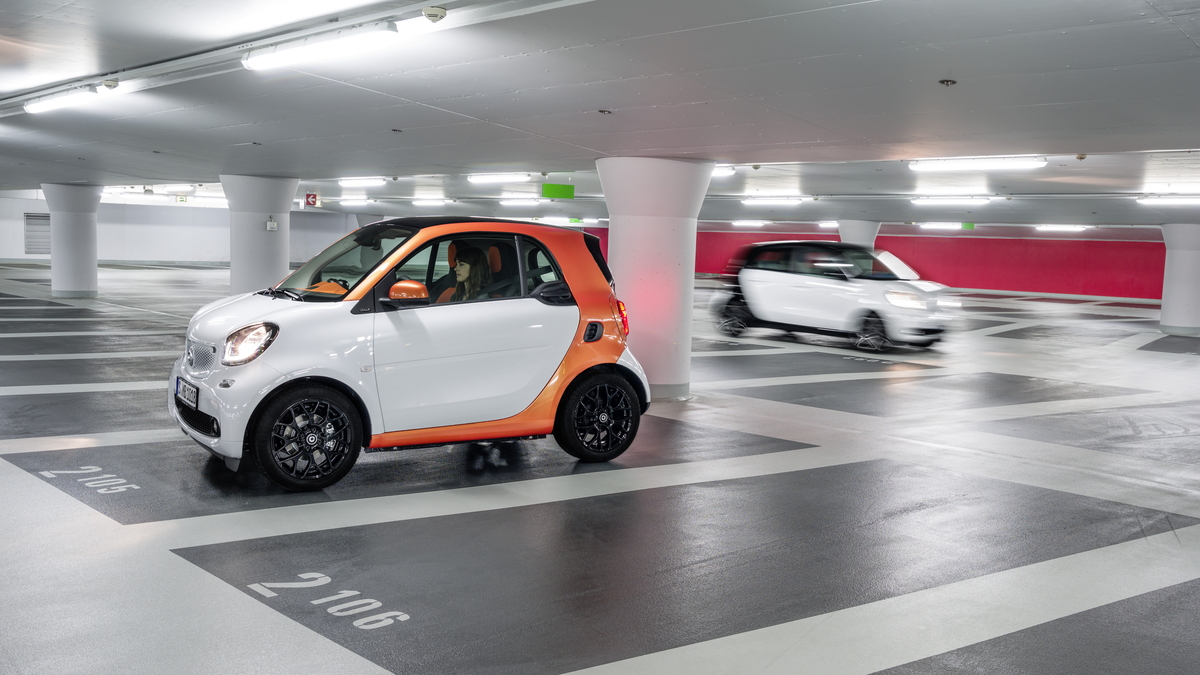 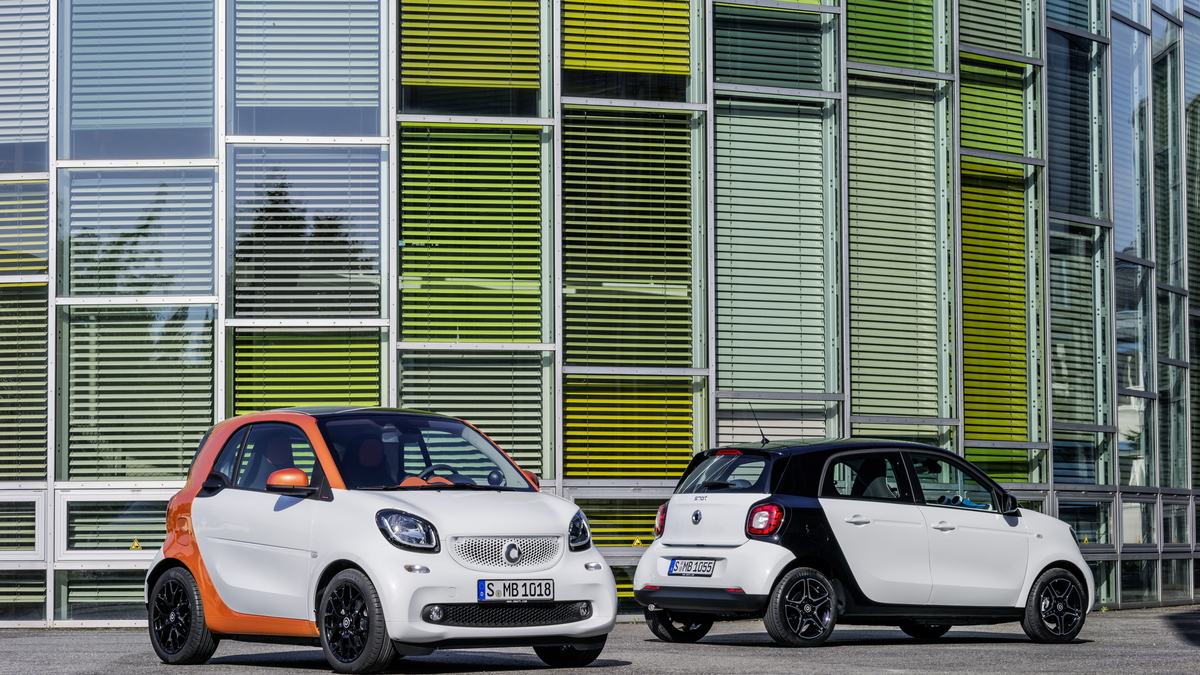 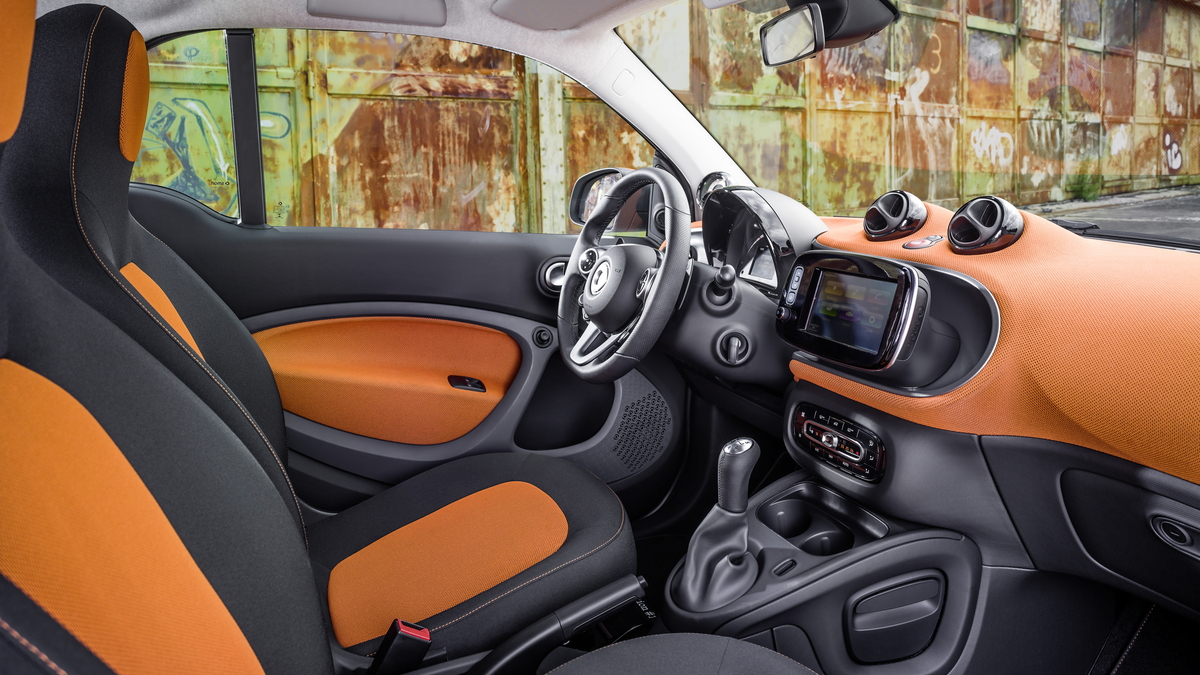 The 2016 Smart ForTwo minicar will arrive at U.S. dealers this fall. When it does, it will be playing the redemption card every chance it gets.

Smart was created to counter the increasing global trend toward urbanization. One way to make cities more manageable is a microcar that fit the needs of urban dwellers in cramped environments.

Walk a few minutes around major European cities like Paris, London, or Berlin, and you’re bound to see at least a dozen or more ForTwos--merging through dense traffic in narrow lanes or parked in tiny niches.

We spent the better part of a day driving the European vesion of the new 2016 ForTwo around Barcelona last November, and immediately a few things were clear.

First, the new ForTwo looks great. While it’s the same length—just 8.8 feet—as the previous car, it’s now about 4 inches wider. The extra width allows both driver and passenger to be aligned, rather than the previous configuration, in which the passenger seat was sited just slightly behind the driver.

Perhaps taking a cue from Scion, there are seemingly endless ways to customize your ForTwo, Smart calls its program Tailor Made, which includes 40 different exterior bi-color paint combinations.

Regardless of which of three available trims—Passion, Prime, or Proxy—you opt for, the colorful, clean cabin gives a thoroughly modern, playful impression. The seats offer a firm, supportive cushion, and our contrasting orange and black seats also had orange contrast stitching, a premium touch.

A new mesh (woven neoprene) material that covers the dash adds a unique touch. In the same vein, the tachometer and clock are in their own housings on top of the dash.

ALSO SEE: 2016 Smart ForTwo: What You Should Know About All-New Minicar

The large navigation screen looks like a 7.0-inch iPad Mini was plopped into the dash sideways. It's easy to use, and the colorful graphics are perfectly at home here.

Our Edition 1 model had a large sunroof that let a generous amount of light and air into the cabin. Unfortunately, the sun visor doesn’t slide, an oversight in this car.

So it looks much better, but how does it drive?

Wanting to sample the new Twinamic six-speed dual-clutch transmission—the one that replaces the jerky and unpleasant five-speed in the first versions of the Smart—we grabbed the keys and navigated our way around the Catalonian capital.

But just as we were noting that the car provided sufficient power to go anywhere a city Smart might need to go, we realized we were driving the three-cylinder 71-hp engine, one that will not come to the U.S.

The new transmission is well-matched to the engine, and we weren’t lacking for power in any situation. When shifting with the steering-wheel paddles, the car becomes much more responsive.

MORE: 2014 Smart ForTwo Electric Drive: What It's Like On The Road

Still, we wanted to see what the 0.9-liter, turbocharged three-cylinder engine--rated at 89 hp and 100 lb-ft of torque--was like. This is the only engine the U.S. will get, and it’s both the most powerful and the strongest that Smart makes.

But why then was it mated to a five-speed manual transmission? Because this is a new model of the ForTwo that will come to America. For the first time, buyers will be able to choose from either a five-speed manual or the six-speed dual clutch automatic.

It shouldn’t come as such a surprise to us, but the combination of turbo engine and manual gearbox was surprisingly appealing.

The ForTwo's rear-mounted engine powers the rear wheels.  Weighing in at a hair under 2,000 pounds, the lightweight two-seater let us zip around Barcelona having far more fun in a Smart car than we could have expected.

While we like both transmissions, we're partial to the row-your-own variety. The clutch is on the lighter side, the pedals are well-spaced, and the shifter sat right under our hands.

Pleasingly, first gear is tall, meaning if you’re in stop-and-go traffic, you can leave the shifter in place until you can get up to higher speeds.

Perhaps most fun of all was taking corners in the ForTwo.

Smart boasts that the ForTwo has the world’s smallest turning radius, and that's really useful when making a U-turn or even taking a sharp corner. You can plow into turns easily with the car’s light-but-accurate steering.

Our primary takeaway that day may have been just how much fun we had driving--especially since the outgoing Smart was known for its herky-jerky lurching power (except for the electric model).

At best, you could call the previous generation of the Smart an underdog in America, and emphasizing the last three letters might not be a stretch.

Sure, its small engine was enough to get you around town, and it could fit into tiny parking spaces.

But the five-speed automatic transmission was unrefined, and the ride quality noticeably poor when we took it out on Los Angeles’s freeways.

It also wasn't especially cheap; you could get a far more appealing and larger Mazda2 for about the same price. Nor was it exceptionally fuel-efficient for the tradeoffs you had to make.

And as it turns out, Smart engineers and executives were paying attention to reviews that highlighted those issues.

Once you get behind the wheel, it’s apparent that Smart understands that it is all-in in the North American market. If this vision of a city car is to take shape anytime in the near future, the 2016 ForTwo has to be dramatically better than the car it’s replacing.

We asked Dr. Winkler if she believed Americans would embrace the ForTwo when the best selling vehicles on U.S. include the Ford F-150 and Chevy Silverado trucks—not to mention even mid-size sedans such as the Toyota Camry—that are all far, far larger.

"We’re not looking to increase market share," she said without hesitating, "we want to increase city share.”

Beyond the obvious locales like Manhattan and San Francisco, we suspect places like Brooklyn, Austin, and Portland, would make great Smart cities. No, we're not using the word "hipster" here.

If the 2016 Smart ForTwo is the brand’s vision of a microcar for urban environments, it may have a bright future in the U.S. after all.

Check back for official pricing, fuel economy, and details on the electrically-powered Smart ForTwo, which is slated to arrive next year.