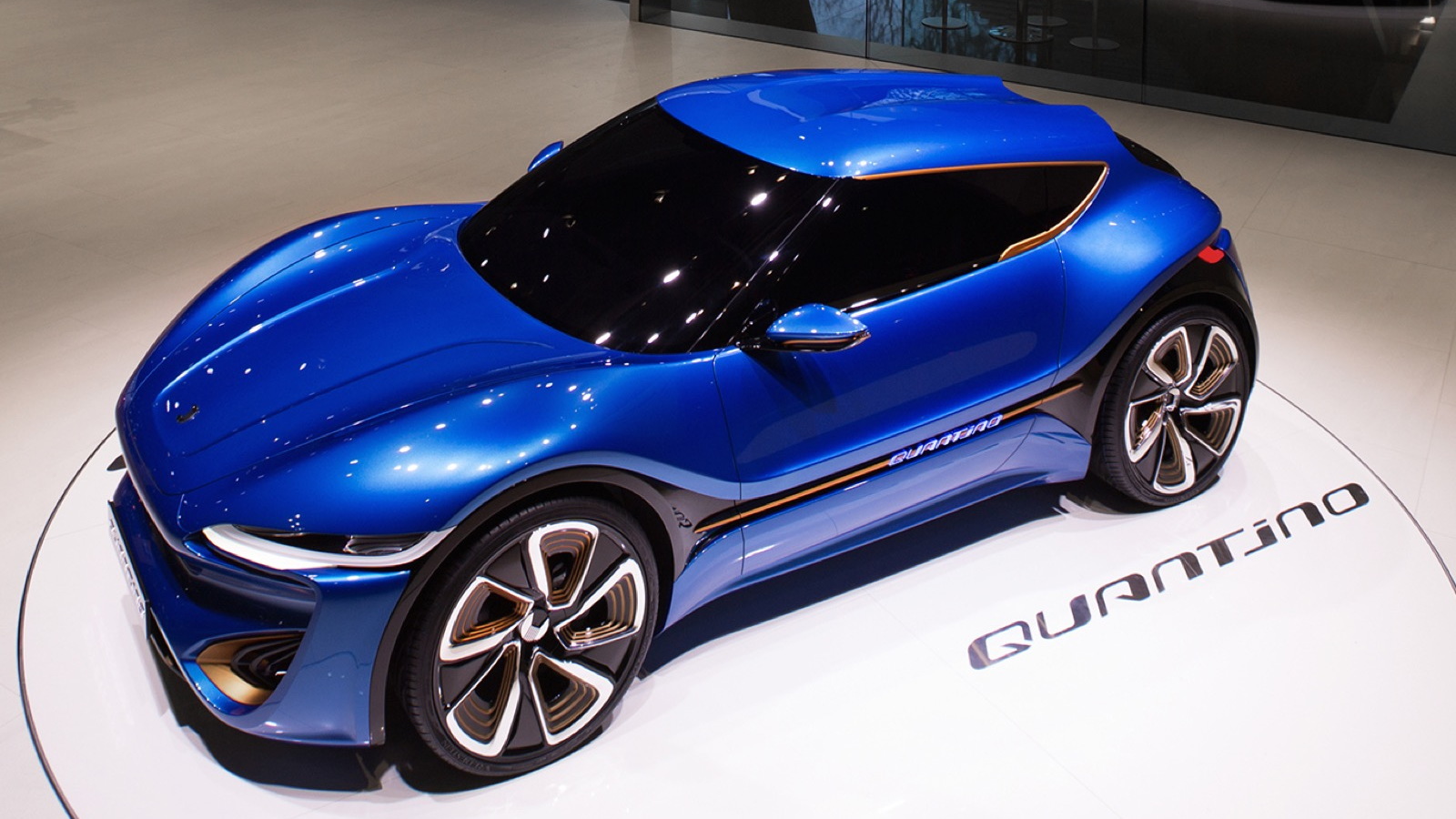 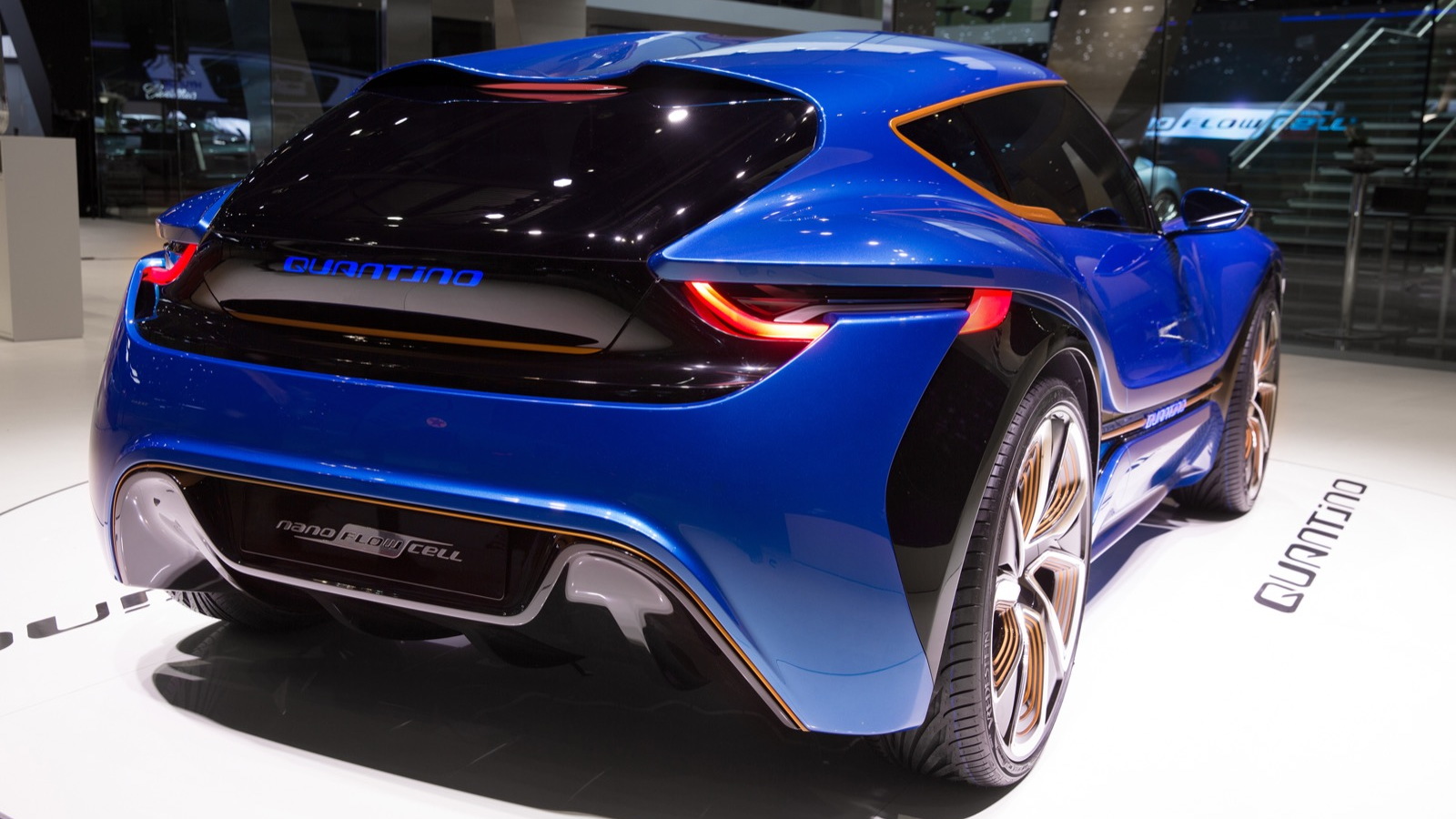 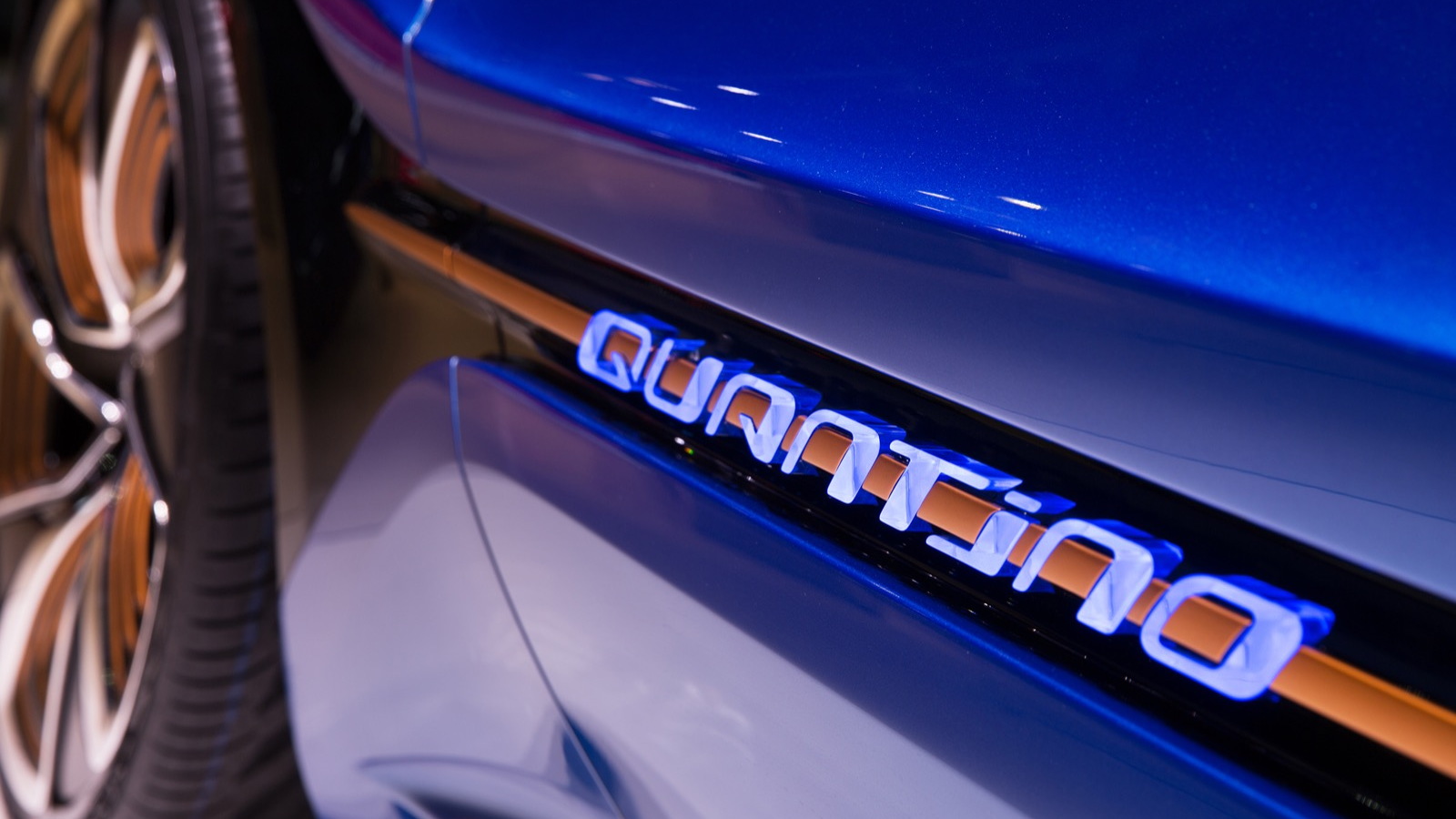 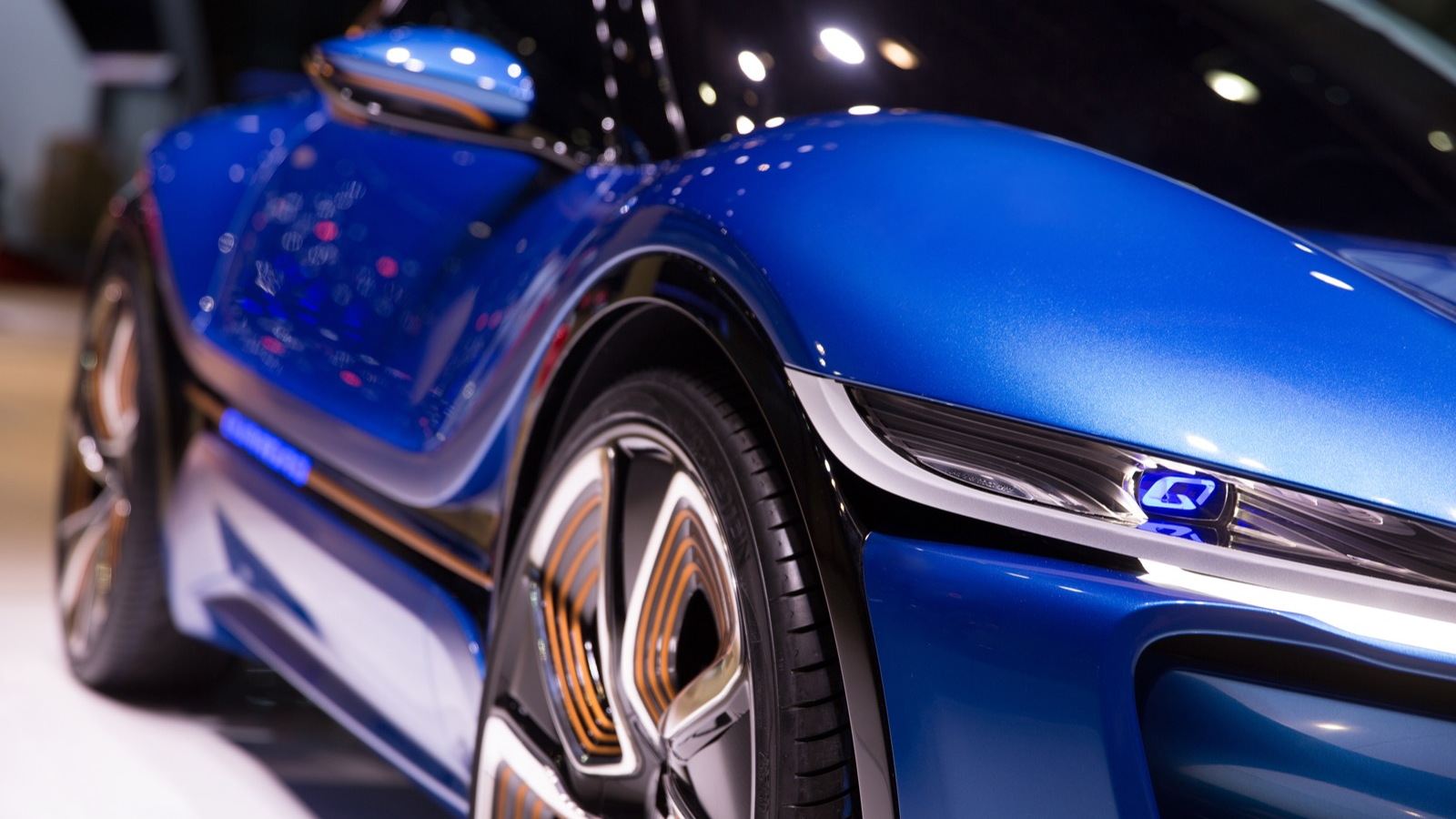 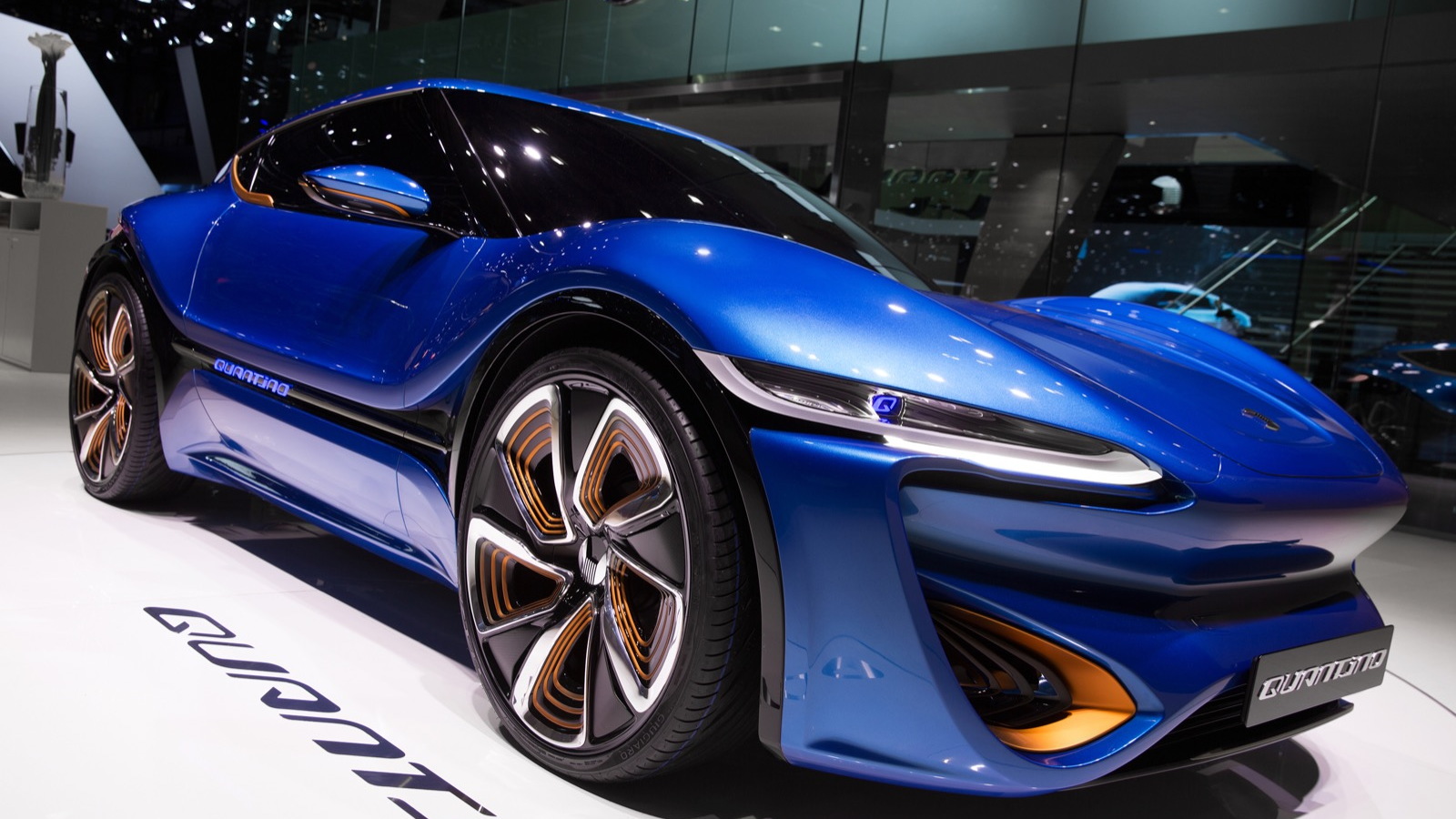 The company NanoFlowcell offered an attention-getting list of claims for the Quant F prototype it revealed at the Geneva Motor Show this past week.

They included an unlimited power source, zero emissions, acceleration from 0 to 62 mph in 2.8 seconds, and a top speed of 186 mph.

Last year at Geneva, the company made its debut with an e-Sportlimousine powered by flow-cell technology. This year, it showed two new vehicles: the Quant F and the Quantino.

Compared to the e-Sportlimousine—otherwise called the Quant E—the Quant F gets a two-speed automatic transmission, but it is effectively a redesign of the Quant E.

Once fitted with a functioning flow cell, it will be used for further testing, the company says.

The new model has one electric motor for each wheel, and its maximum system voltage has been raised from 600V to 735V—with a nominal current of 92 amps.

The Quantino is a much smaller vehicle (around 150 inches long), with four 25-kW motors that adds up to 136 horsepower.

The company notes that it is working on a lower-voltage (48V) version of the cell system for the Quantino. Top speed would be nearly 125 mph.

In both cars, power is delivered by one three-phase induction motor per wheel, coordinated with a torque-vectoring system.

The company claims a range of nearly 500 miles with the Quant F, and more than 620 miles for the Quantino.

Meanwhile, the Quantino functions as a design concept to show the potential direction of a production sports car equipped with the NanoFlowcell technology.

But what is that technology? The concept cars have electric powertrains, and that part is easy to grasp.

But instead of large battery packs, each uses electricity from a flow cell, in which two ionic liquids are circulated (or 'flow') past a membrane.

In the Quant F, for instance, there are two 250-liter tanks on board to hold those flow-cell solutions.

Based in Liechtenstein, NanoFlowcell now operates a facility in Weissach, Germany, that has “more than 100 R&D professionals” working on the project, it says.

That’s in addition to a laboratory in Zurich, where it says development chief Nunzio La Vecchia and his team are “examining important aspects of quantum chemistry on the basis of molecular engineering.”

Last July, the Quant e-Sportlimousine, or Quant E, attained approval for road use in Germany and Europe.

Last week, the company released a video (below) of the Quant E being driven on public roads.

As with an earlier video, parts of this clip look they’ve been sped up--but it gives a sample of the electric-car whine it makes when driven quickly.

Yet the company hasn't yet provided or elaborated on answers to fundamental questions about the technology: What are the (proprietary) ionic liquids inputted?

What do they cost, and how much energy do they take to manufacture?

How difficult will they be to distribute?

Last year the company referred to one (or both, we’re still not sure) of those solutions as sea water. This year a spokesperson wouldn’t tell us what solution the working prototype used.

Another representative on the stand told us that the only byproduct of the cells is a powder that can be disposed of nearly anywhere.

So what is that powder, and how is it released? In the Pacific Northwest, for example, we can't use road salt on slick roads for environmental reasons.

The representative wouldn’t confirm that it’s sodium, or a sodium-metal compound, but an earlier video from the company had limited its explanation to “harmless ionic water dust.”

We're not entirely sure what "water dust" actually is, but we trust that Quant's representatives are more familiar with the core technology developed by their engineers than they're letting on.

That said, the company says its technology is especially stable, which it implicitly contrasts to the potential risks of ‘thermal runaway’ in lithium ion cells.

Additionally, NanoFlowcell is actively promoting its technology for trucks, buses, and trains.

As long as the details behind the company’s vehicles and core technology remain obscured—especially the crucial energy and carbon footprint numbers—we await some form of independent testing.

In the meantime, it appears that the Quant vehicles stand largely as attractive designs and concepts today, pending further information, testing, and more knowledgeable representatives.