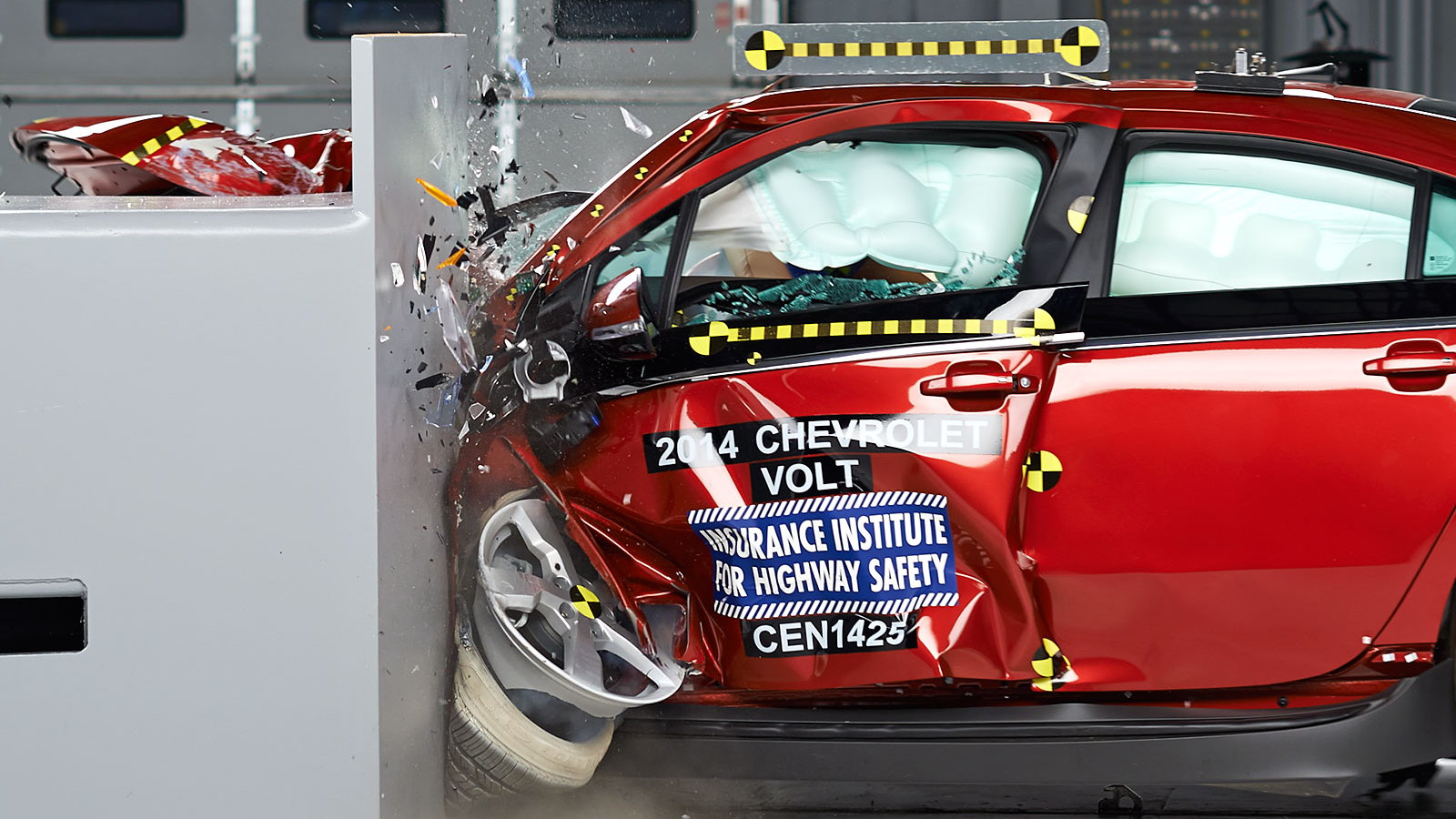 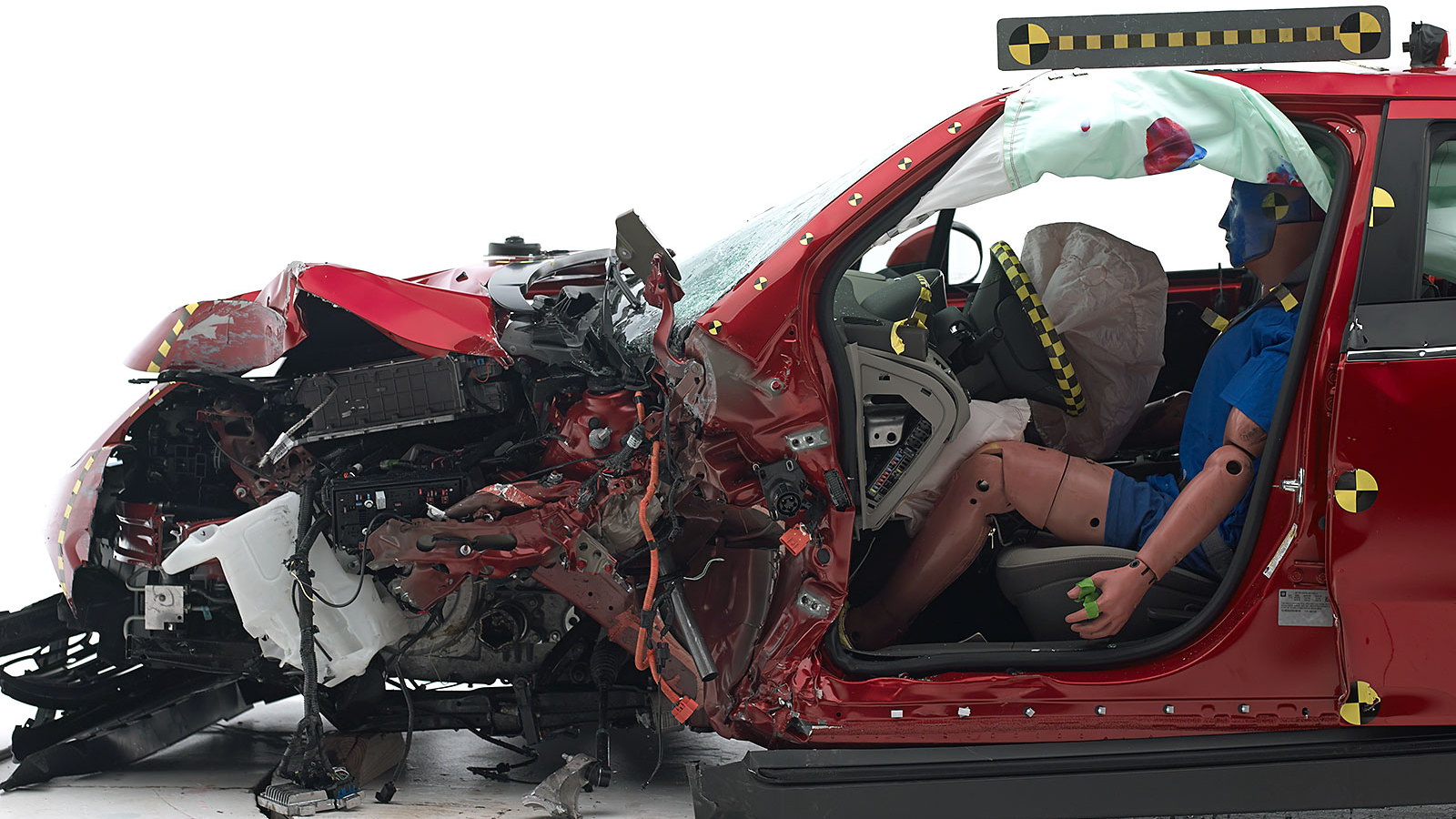 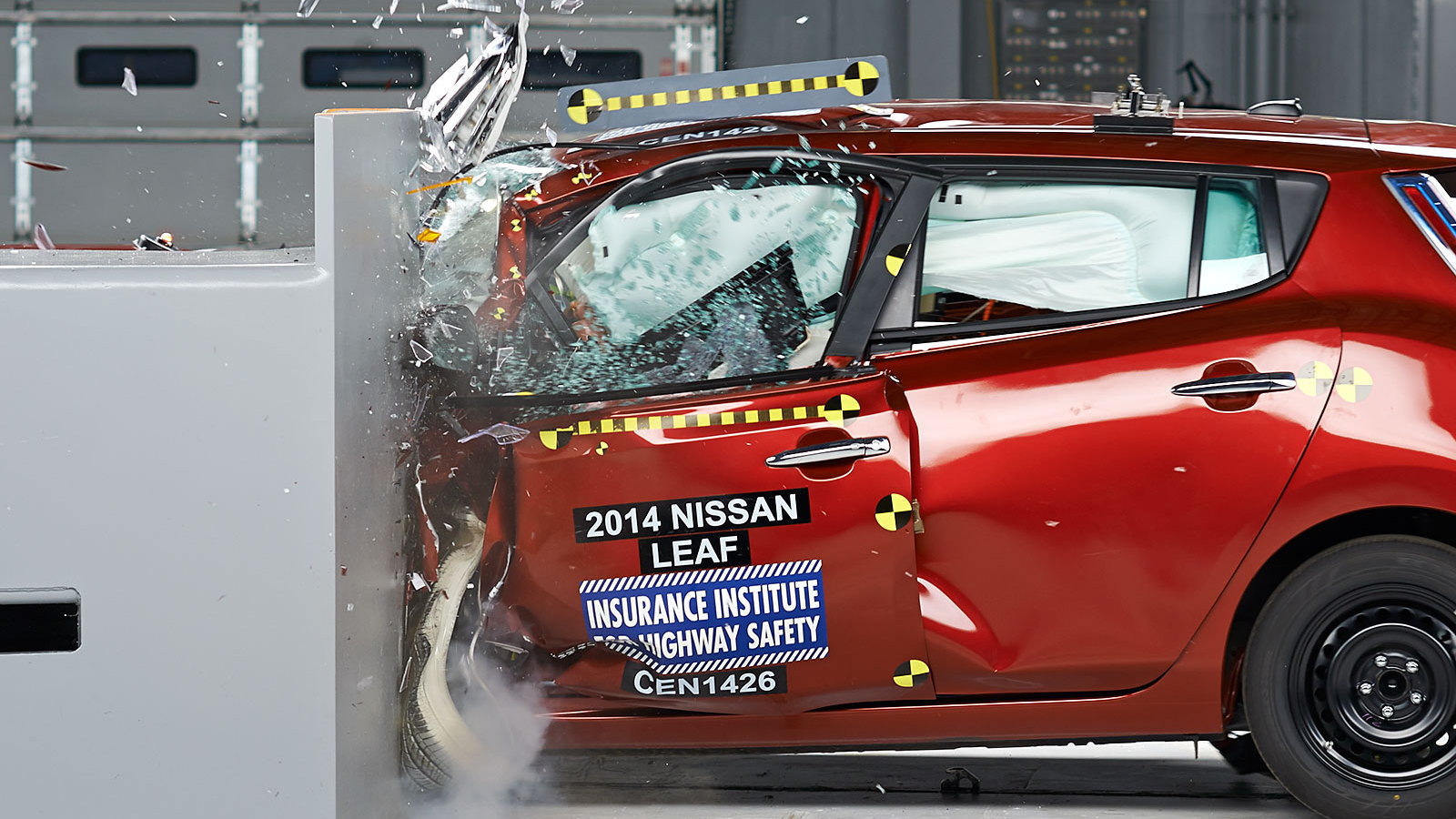 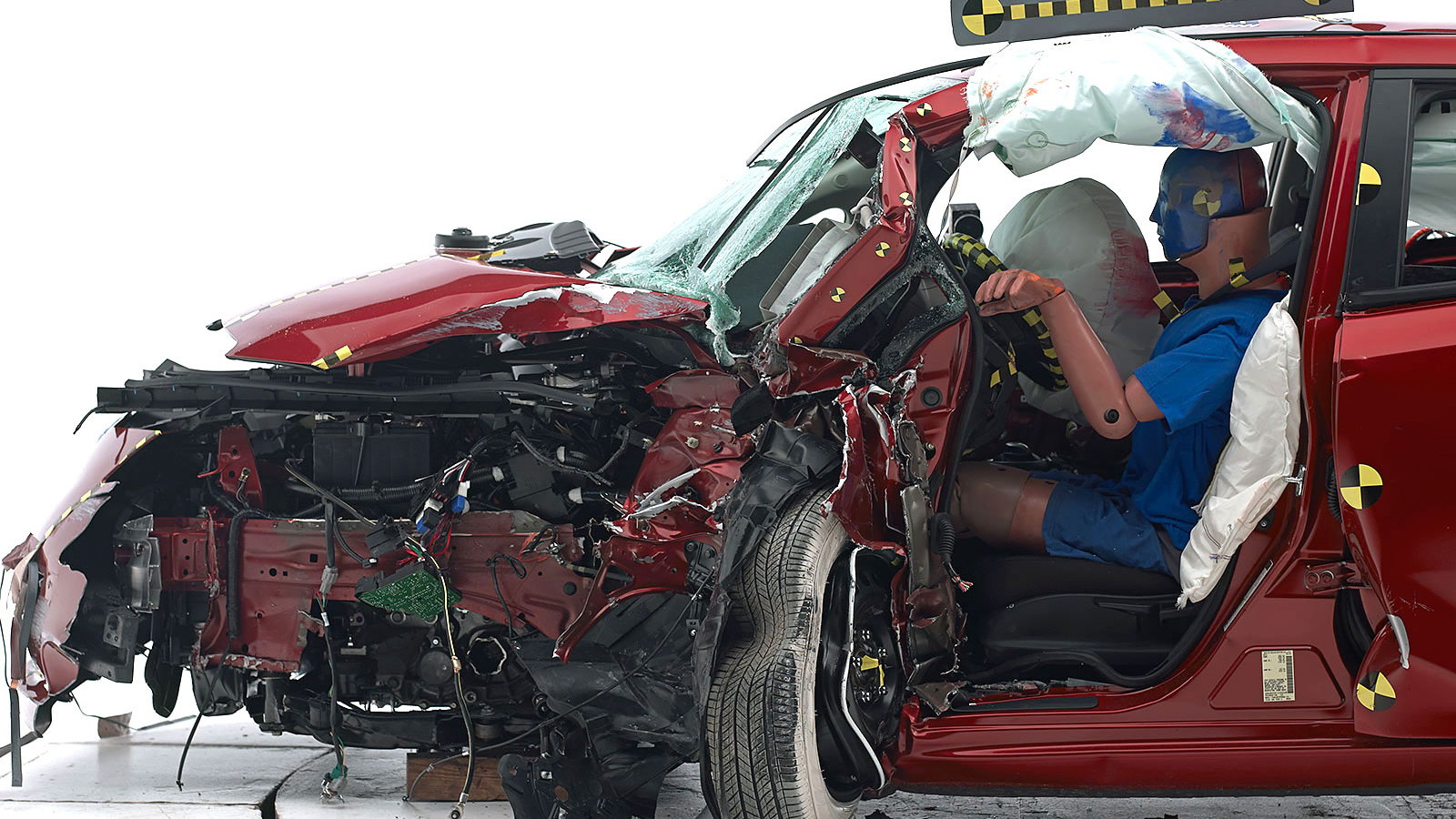 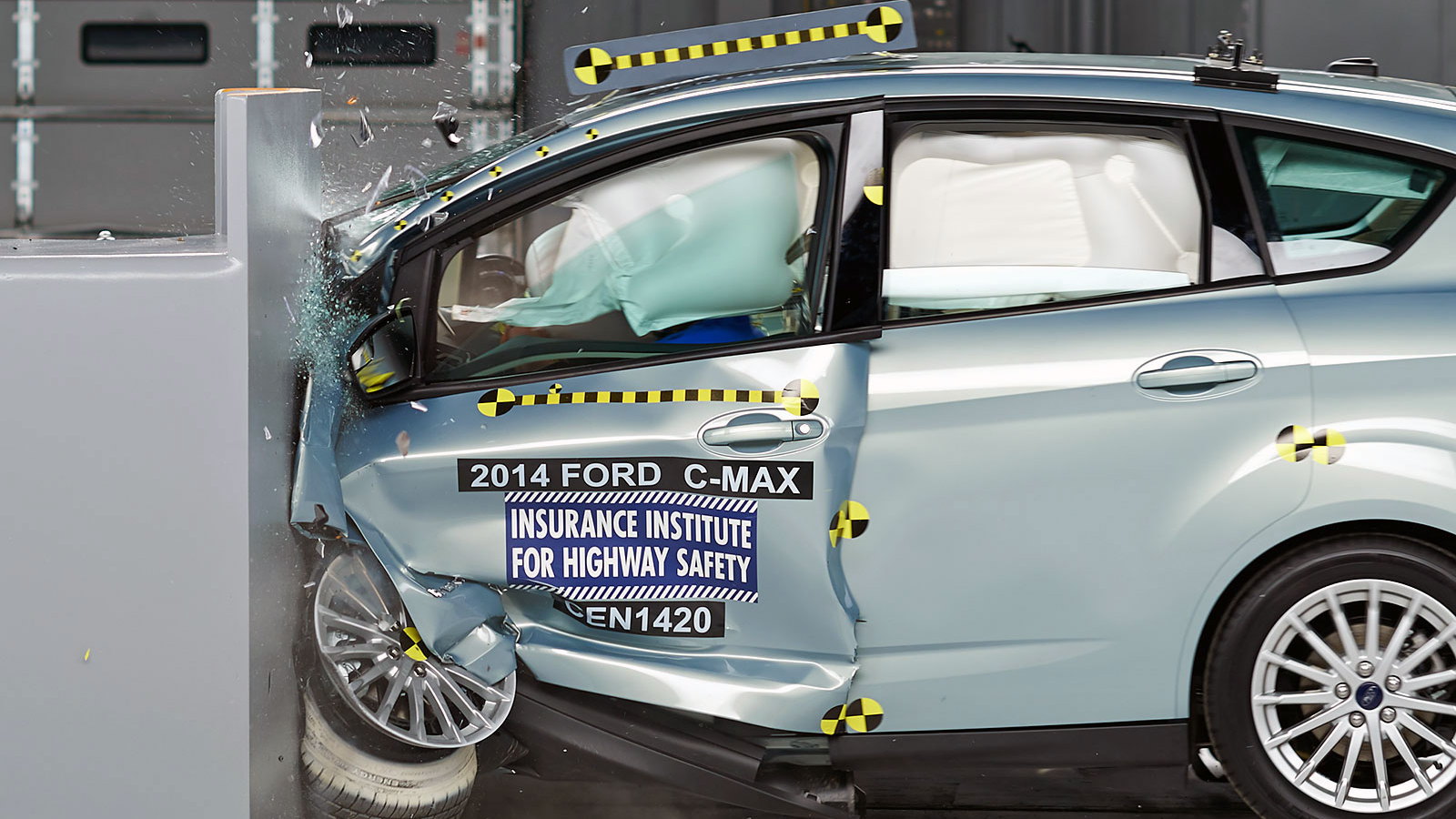 One of the toughest crash tests a car can face is the new small-frontal-overlap, introduced by the Insurance Institute for Highway Safety in 2012.

By crashing a vehicle so that only 25 percent of its front end contacts the barrier, far greater forces are transmitted through the car than in a typical offset crash test.

The Nissan Leaf, Chevrolet Volt, and Ford C-Max Hybrid are among 12 of the latest smaller cars subjected to the test--and it's mixed news for the green trio.

Both the Volt and Leaf were tested back in 2011, prior to the small frontal-overlap test's introduction. Each scored top ratings in the IIHS tests at the time--moderate-overlap front, side, head restraint, and roof-strength evaluations.

The Volt still maintains its impressive record, scoring an "acceptable" rating in the small overlap test.

As a result, the 2014 Chevy Volt is now designated a Top Safety Pick+, the highest honor IIHS gives for overall vehicle safety.

The Volt's "acceptable" rating is still one notch below the top "good" rating, but not bad for a car designed before the test was introduced. It's worth noting, however, that its frontal structure was modified starting with 2014 models in anticipation of the small-overlap crash test.

The Leaf, however, didn't fare so well.

It scored a "poor" rating in the small overlap crash, with a worrying 16 inches of intrusion in the lower cabin and 14 inches in the upper occupant compartment.

The crash, which sends significant forces down the side of the car rather than spreading them across its crash structure, deformed the Leaf's A-pillar--and footwell intrusion was significant.

Differences between the Volt and Leaf (both test cars are red) are clear in the images.

Where the Leaf's A-pillar buckled in the crash, the Volt's remained largely in-shape, causing far less cabin intrusion. It's likely the Leaf driver would suffer much greater leg injuries in such an impact than a Volt-driving counterpart.

On the plus side, both cars were commended for their battery pack protection--often an area of concern following impacts.

One other green vehicle fared reasonably in the tests--the Ford C-Max Hybrid, like the Volt, scored an "acceptable" rating in the test.

Vehicles with battery packs are considered at a slight disadvantage in such tests as the extra weight they carry means more energy must be dissipated in an impact than with a car of equivalent size but lower weight.

One car that doesn't carry a battery but achieved a "good" rating in the small overlap is the MINI Countryman crossover utility vehicle. In contrast, "poor" ratings were awarded to the Nissan Juke (built on the same line as the Leaf in its Japanese and European factories), the Mazda 5 minivan, and the Fiat 500L.

Thanks to the acceptable small-frontal-offset rating and high scores in other areas, the Volt remains the sole car in the group to score an IIHS "Top Safety Pick Plus" rating.

Several others score a "Top Safety Pick" rating, but they miss out on the "Plus" due to a lack of collision-prevention technology.

"Consumers trading the inherent safety of a larger vehicle for the convenience or fuel economy of a small car should focus their search on these vehicles with state-of-the-art safety designs" said Joe Nolan, the Institute’s senior vice president for vehicle research.