Imagine a future where electric-car charging stations are so well integrated into the cityscape that you literally wouldn't notice one even if you were standing on top of it.

That might be possible one day: New York City could be getting wireless electric-car charging stations disguised as manhole covers, Wired reports.

The manhole-chargers are made by Hevo Power, which hopes they will provide a convenient charging solution for electric vehicles that operate in large cities.

The system consists of a power station that can be bolted to the street or embedded in the pavement, and a receiver pad that connects to the vehicle's battery. The driver uses a smartphone app to dock the vehicle and start the charging process.

Hevo's design uses resonance charging, rather than the inductive charging system used by smartphones, laptops, and a handful of retrofitted electric cars.

Both systems use coils in the charging station and vehicle to transmit electricity, but resonance charging links the two coils with capacitors that both resonate (hence the name) at the same frequency.

This reduces energy loss, making the charging process more efficient, according to Hevo. 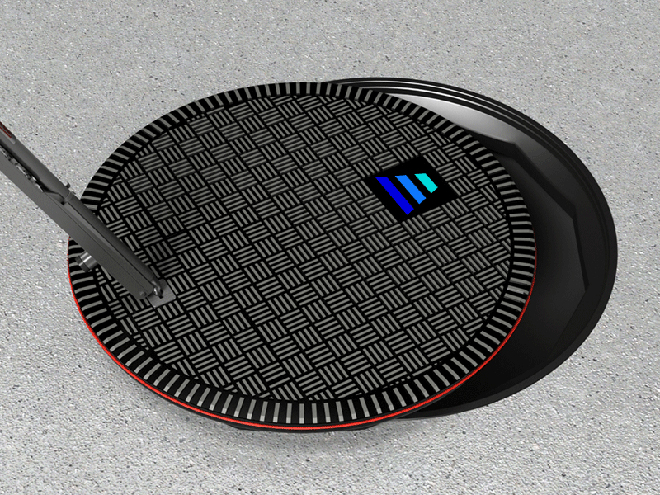 The Hevo manhole is rated at 220 Volts and up to 10 kilowatts. The company says the system is capable of more than 10 kW of output, though for now it's focusing on short-range electric vehicles. The Nissan Leaf, for one, now maxes out at charge rates of 6.6 kW.

Hevo plans to install its first wireless charging stations in Washington Square Park, in the center of Greenwich Village, early next year.

They won't be accessible to the public--which would be unlikely to have resonance chargers in its cars anyway--but instead will be used to charge two Smart Fortwo Electric Drive plug-in cars operated by New York University.

That's not the only way manhole charging stations might be used, though.

Hevo is reportedly in talks with Pepsi, Walgreens, and City Harvest regarding possible fleet use. Since delivery vehicles have set routes, the Hevo units could be positioned at predetermined stops. The vehicles could charge while they're being unloaded.

The convenience of wireless charging has made it attractive outside the Big Apple as well.

Bosch now offers a wireless charging system to owners of the Chevrolet Volt and Nissan Leaf, and Nissan is developing its own system, potentially for use on the future Infiniti LE luxury electric car.