The problem with battery electric cars is that you can't take them on long trips, because they take so long to recharge.

Or so goes the common wisdom, anyhow.

Would a trip from Los Angeles to New York City in an electric car perhaps refute that statement?

Musk is planning to take a "personal road trip" from one coast to the other in a Tesla Model S, using the company's network of Supercharger quick-charging stations to recharge the battery en route.

The trip is, in part, a publicity stunt to demonstrate that Tesla's electric cars can in fact cover distances longer than their 208-mile and 265-mile rated ranges.

Today, the Supercharger system will recharge a Tesla Model S battery to 80 percent capacity in about 30 minutes.

A charging station upgrade to 120 kilowatts will cut that to about 20 minutes, which Musk said is the length of an average rest stop in a gasoline car.

Today, there are less than a dozen Supercharger stations, but Tesla has ambitious plans to expand its network.

By 2015, it says, it will have hundreds of Supercharger locations, totaling 2,000 to 3,000 individual charging ports.

Among the earlier installations will be a handful of coast-to-coast Interstate corridors.

Musk didn't specify his route, but Tesla has said that by the end of the year, it plans to open a cross-country passage of Supercharger locations, mostly via Interstate-80.

That route would stretch from San Francisco (the western terminus) through Utah, Colorado, Wyoming, South Dakota, and Minnesota, and onwards to New York City.

Musk's timing is simply "by the end of the year," though we wonder if a more southern route might not provide warmer climates, which allow more range from electric-car batteries than colder temperatures. 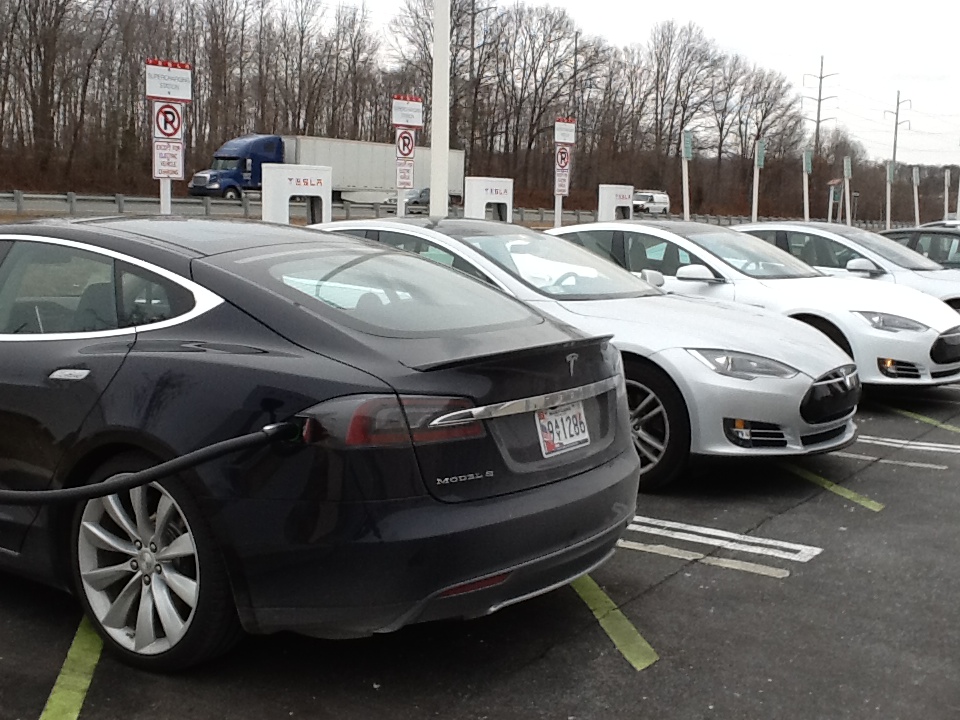 We envision the trip consisting of a small flotilla of Model Ses, actually, since Musk said he plans to make the trip with his five kids.

As Musk is presently a divorced dad, we suspect there may be a nanny or two involved, traveling in one or more support vehicles.

Since every Supercharger location has several charging ports, that shouldn't be a problem.

Musk's trip via Supercharger quick-charging should actually be easier than a couple of previous coast-to-coast trips in Model S cars, one this past January and one the previous September.