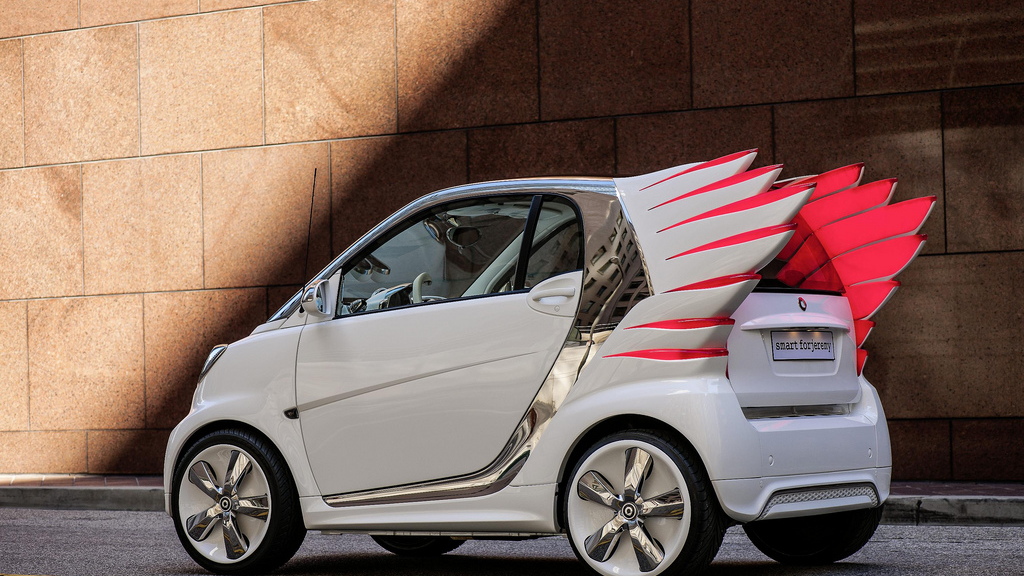 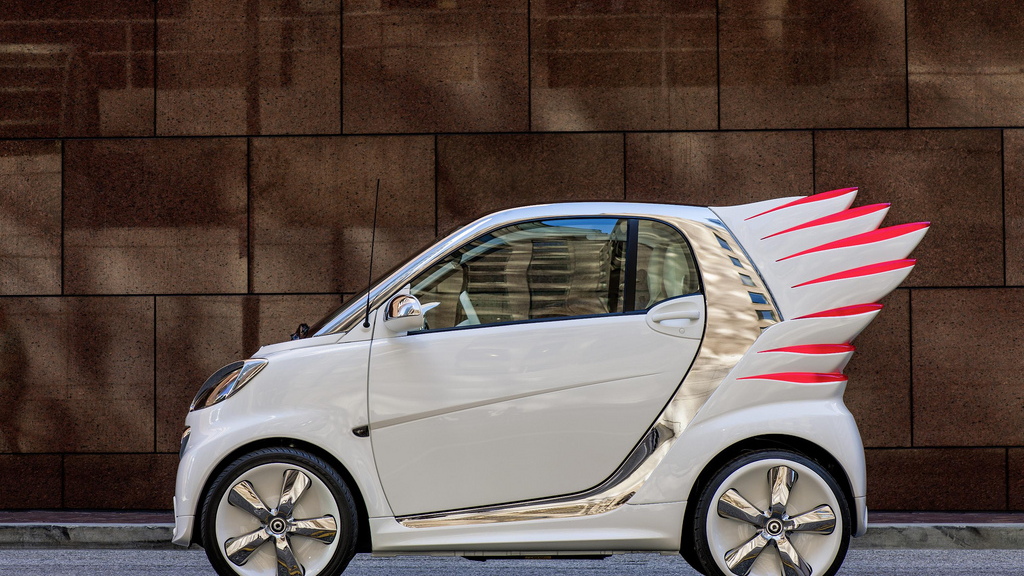 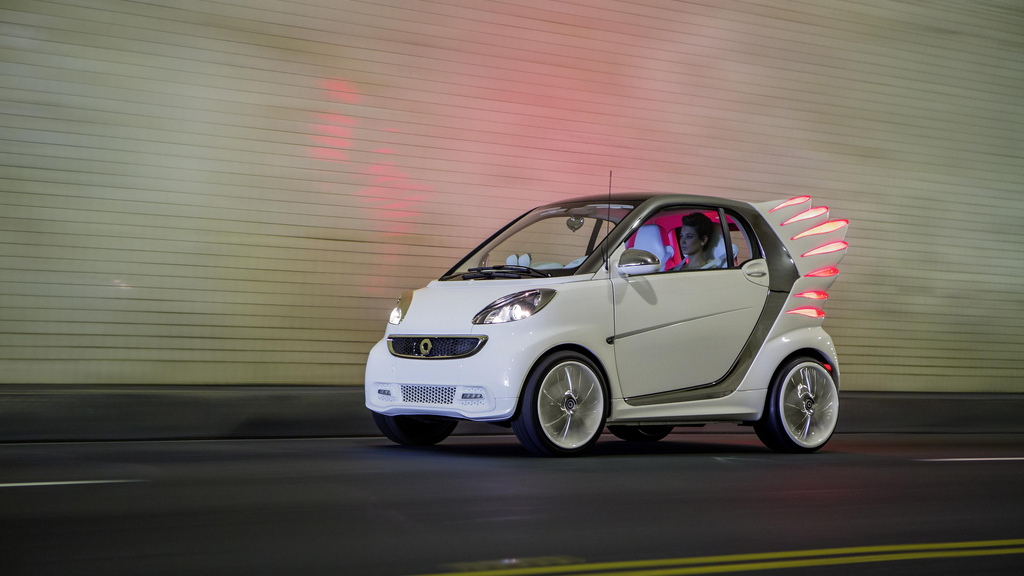 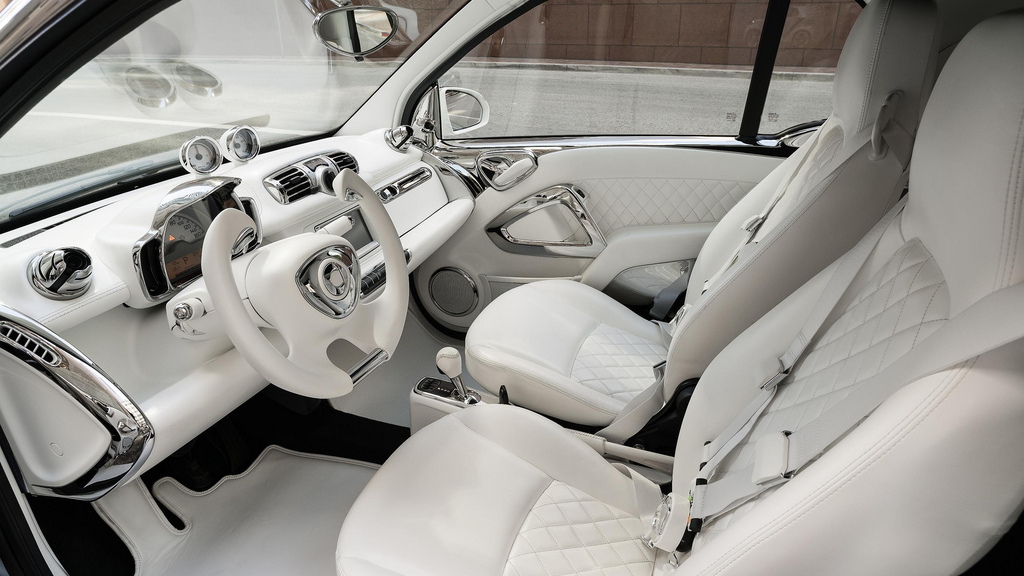 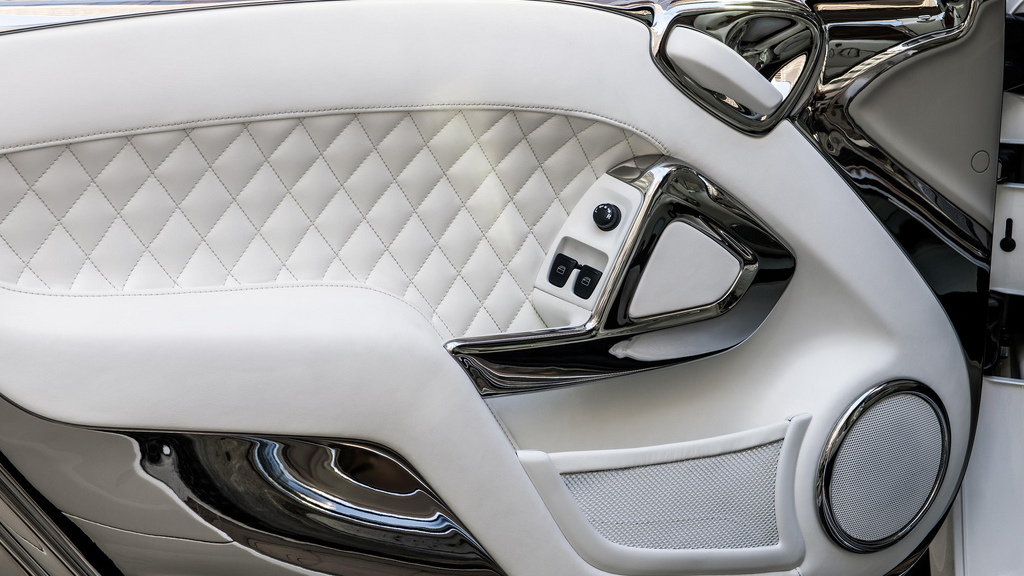 8
photos
It isn't unknown for Smart to unveil an unusual concept car every now and then--the For-US pickup would be a good example.

But thanks to fashion designer Jeremy Scott, Smart has unveiled probably its oddest vehicle yet.

Based on the current Fortwo Electric Drive model, it isn't hard to see what makes the car so bizzarre--where normally the car would end abruptly, instead the 'forjeremy' has sprouted wings.

The worlds of fashion and automobiles have collided before with varying results, but few have stood out so much as the be-winged Smart.

The wings are made of fiberglass, and 'rocket-shaped' elements along the trailing edge light up red, acting as the car's brake lights. It's reminiscent of the space-race inspired fins on 1950s American cars, only much more incongruous on something so small.

Elsewhere, the forjeremy gets wider rear wheel arches, wider wheels and tires all around, and white paintwork. The paint is contrasted by chrome finishing on the Smart's signature 'Tridion' safety cell.

The front is much less unusual, but still gets several honeycombed grille elements--a common theme in recent Smart concepts--and chrome 'eyebrows' over each headlight.

Interior architecture is unchanged from the production Electric Drive, but most surfaces have been trimmed in white Nappa leather, and jet engine-style vents replace the two outer air vents. The forjeremy also gets race-style seatbelts, and a cut-top steering wheel.

Controversial it may be, but it's going down a storm with Jeremy Scott's fans--who littered the designer's Instagram feed with praise.

Lightness and freedom were major themes for the designer, and an electric drivetrain was chosen as a result.

"For me, wings mean freedom, a sense of weightlessness," he said. "Because of this, I definitely wanted to have them for the smart electric drive in order to convey the way it frees the environment of noxious emissions and symbolises the new lightness of mobility."

Speaking to Racked, Scott says he didn't just sketch the design and have it built, but worked on a full Smart, refining his design with tape, honing them to his tastes.

The hints of 1950s in the wings aren't an accident either. "I really wanted to play on the '50s hot rod idea but make it completely otherworldy." said the designer.

As with the regular Electric Drive, the forjeremy gets a 55 kW electric motor, and a 17.6 kWh battery pack.

Surprisingly, there are even plans for a limited edition forjeremy--though whether this will feature the full set of wings is a different matter...