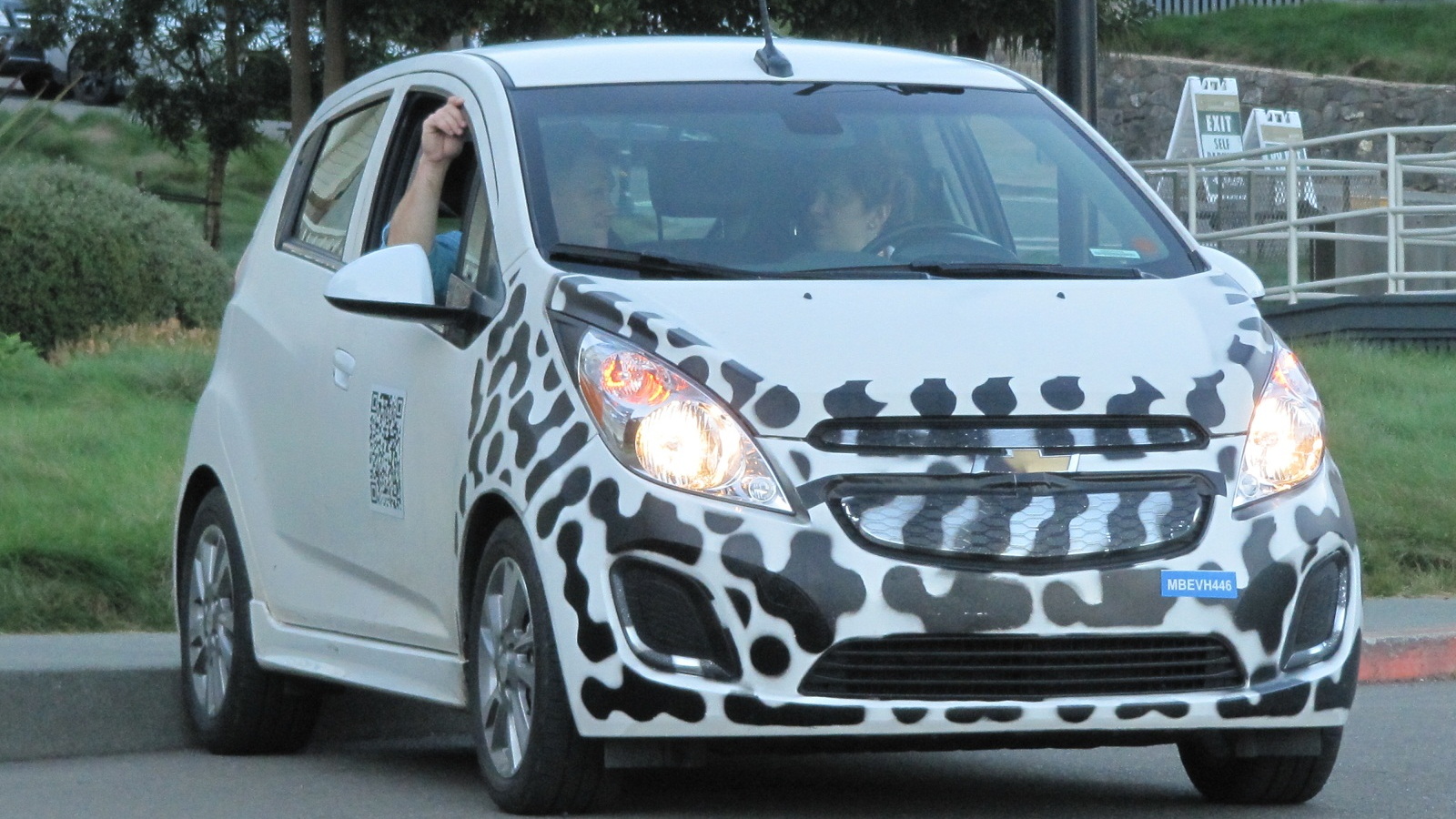 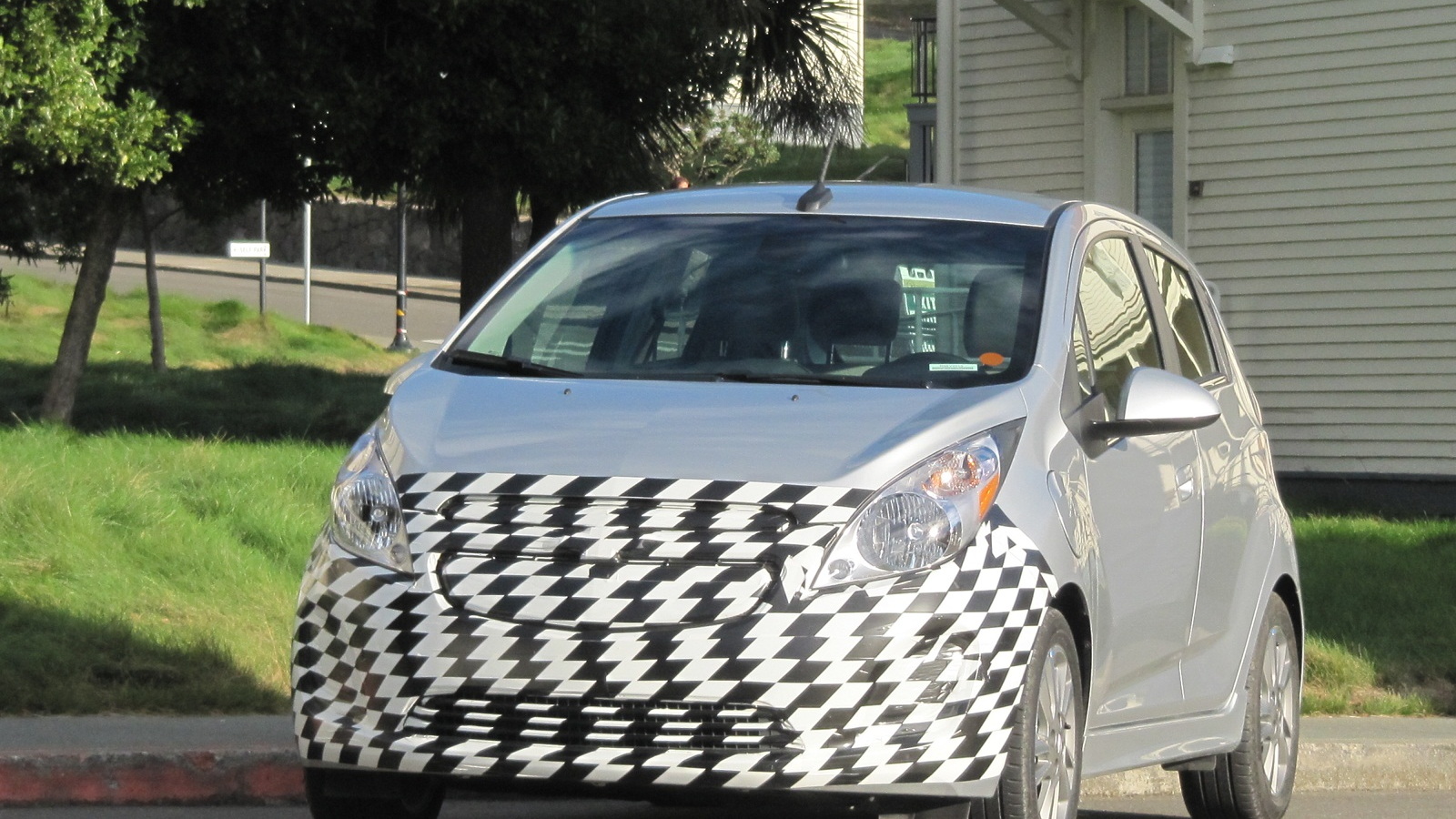 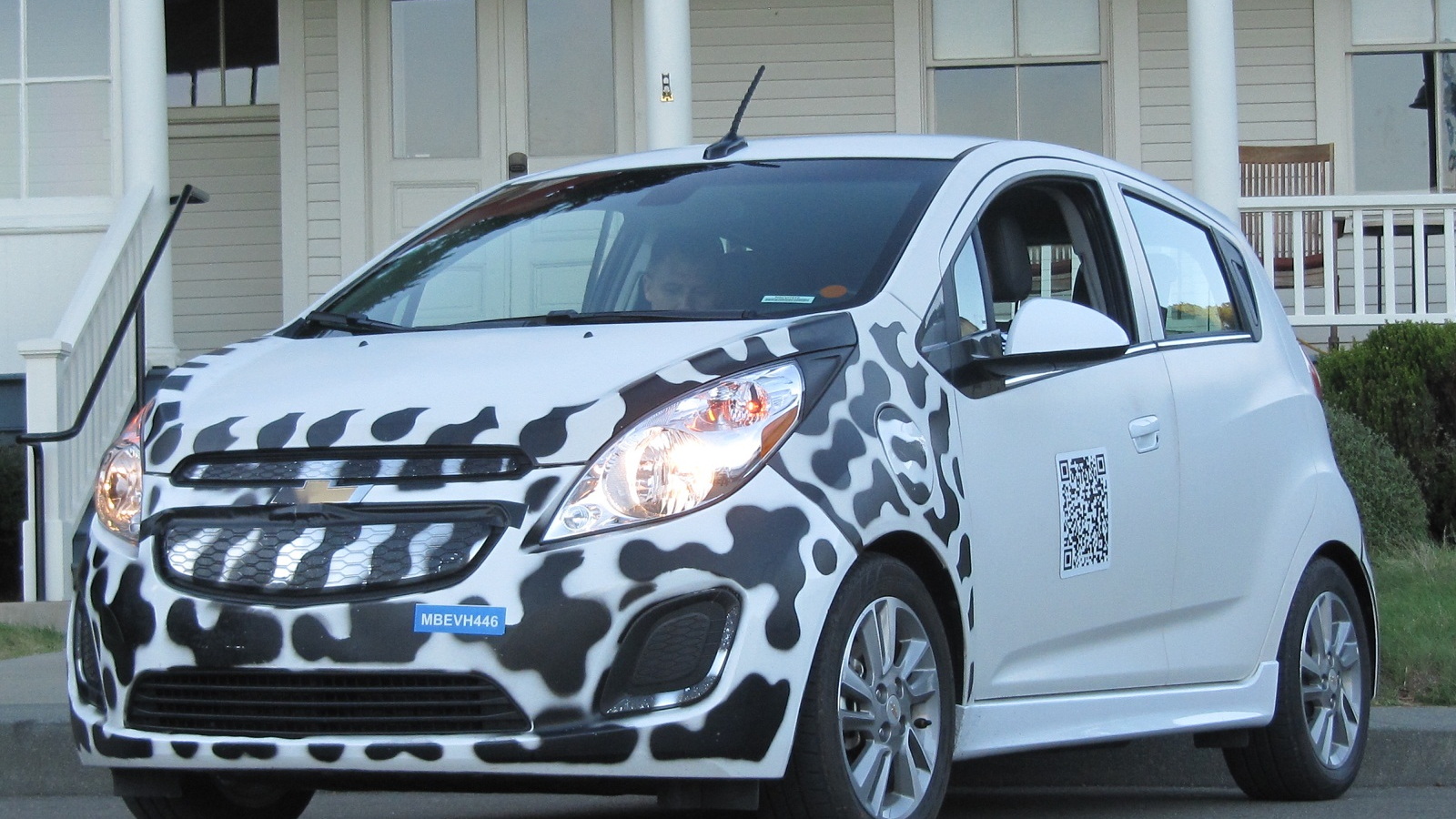 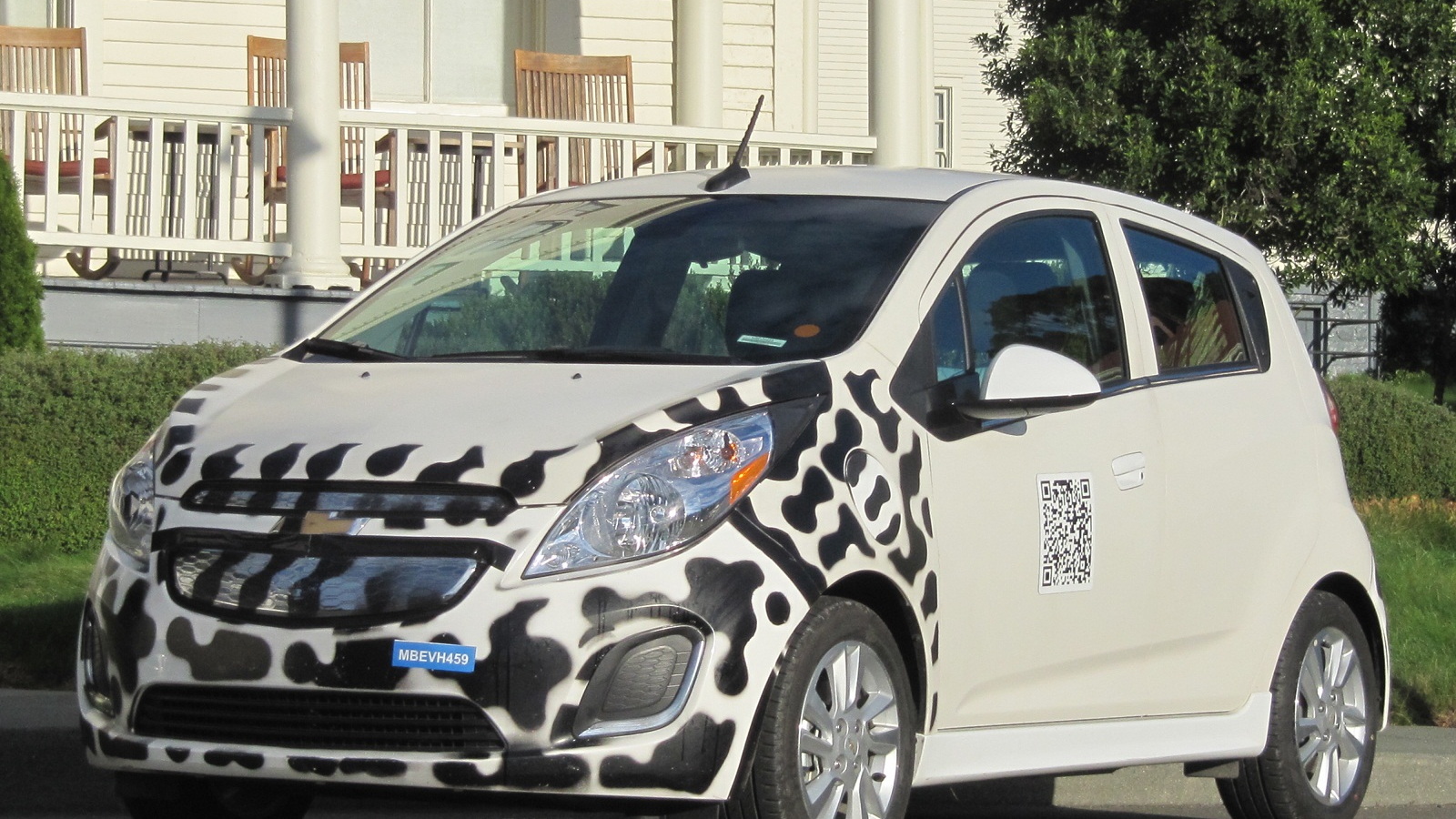 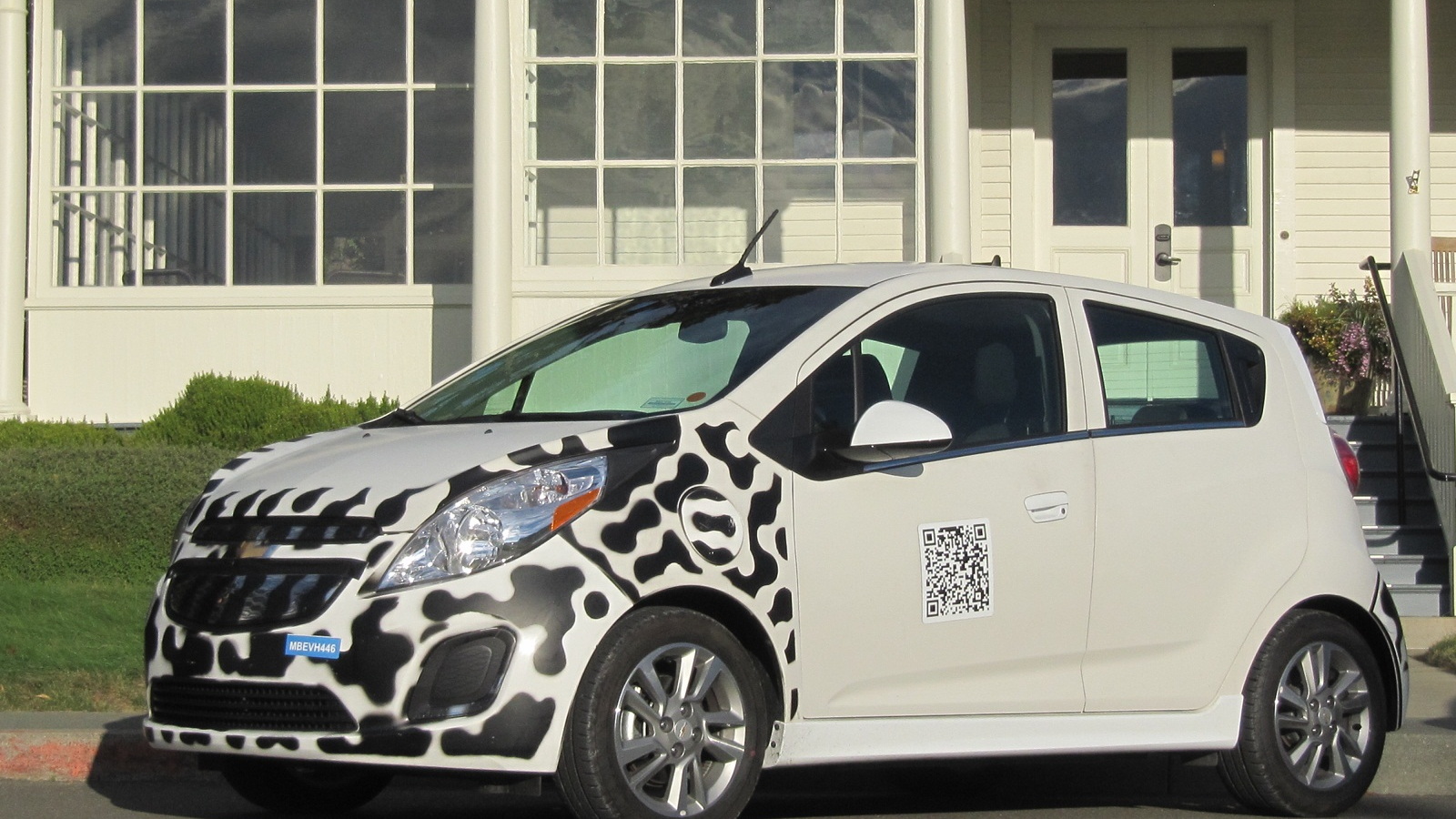 As GM's first battery electric car since the EV1 of the 1990s, there's more riding on the 2014 Chevrolet Spark EV electric minicar than its size would indicate.

The company maintains the electric Spark is not just a compliance car, but a fully developed product to be sold not only in California, but in Korea and other markets.

Yesterday, Chevy let journalists drive four prototype Spark EVs around a short loop at the breathtaking Cavallo Point resort, a former U.S. Army base below the north end of the Golden Gate Bridge.

The 2014 Spark EV will be officially launched at the Los Angeles Auto Show in two weeks, and the car goes on sale in California next summer.

That means that engineers had to do substantial work on the car's basic structure.

It included replacing the gas tank under the rear seat with a battery pack that extends rearward under the cargo floor, and replacing the engine and transmission up front with an electric motor and associated power electronics.

Eliminating the gas filler opening behind the right rear door required modifying the body-side stamping, as did adding a charge port door to the left front fender.

Aside from a silver grille blanking panel just like the one on the Chevy Volt, the electric Spark EV doesn't look all that different from any gasoline Spark.

It has a host of subtle aerodynamic modifications, including new front and rear fascias, sill extensions, a longer spoiler on top of the tailgate, underbody panels, and active shutters that close off airflow through the front of the car above 35 or 40 mph when it's not needed for cooling.

The alloy wheels differ from those on gasoline Sparks, but the most notable change may be the color palette.

But the prototypes shown to the press had no body-side badges, and just a small "Spark EV" chrome badge on the tailgate of a cutaway electric Spark.

Those included the precise size of the lithium-ion battery pack ("more than 20 kilowatt-hours"), top speed ("around 90 mph"), projected MPGe efficiency rating, and an estimate of the car's maximum range.

Vehicle engineers did say that the Spark EV uses roughly 85 percent of the total capacity of its liquid-cooled battery pack. The lithium-ion cells and the battery pack itself are fabricated and assembled in Michigan by A123 Systems.

The Spark EV's electric motor--which GM will build in Maryland--powers the front wheels and is now rated at 100 kilowatts (134 hp) of peak output, higher than the 85 kW (114 hp) cited last year. Peak torque is quoted at a whopping 400 lb-ft.

That compares to the 84 hp of the gas Spark's 1.2-liter four-cylinder engine. Indeed, Chevy says the electric Spark will have a 0-to-60-mph acceleration time of less than 8 seconds, far better than that of the gasoline version (and about a second quicker than the Chevy Volt).

From the driver's seat of the electric Spark, the instrument cluster resembles that of the Chevy Volt, with several different screens of crisp, bright graphics that drivers can choose from.

A vertical green battery diagram shows the state of charge, along with an estimate of remaining range based on recent driving patterns.

Other changes compared to the gasoline Spark include a Volt-style power button on the console, standard heated seats, and an electric parking brake triggered by a switch between the seats.

A switch just behind the shift lever lets drivers put the car into Sport mode, which changes the throttle mapping to reduce acceleration times.

As well as Drive, there's a Low position on the shift lever that increases brake regeneration--again, just as there is on the Volt.

From the outside, the Spark EV is remarkably quiet, with no motor whine apparent as it passes by.

Behind the wheel, over the course of several 5-minute drive loops, the electric Spark behaved predictably, with smooth acceleration paired to the tight turning circle of the conventional version.

The Spark EV gathered momentum steadily and quickly, and seemed to corner well, with a low center of gravity.

Program engineers said the electric power steering was still being tuned, and that the car's electronic control systems had to be significantly adjusted to cope with the electric Spark's very different front-rear weight balance.

The battery pack, located over the rear axle and forward, weighs 550 pounds, making the front-to-rear weight shift on full power very different in the Spark EV.

Among other modifications, Chevy engineers had to fit a different torsion-beam rear axle and wider rear wheels and tires to the electric version of the Spark.

We look forward to spending time in the production version of the 2014 Chevy Spark EV next summer.

Chevrolet said nothing about pricing for the electric Spark, and we don't expect any prices to be released until much closer to the car's arrival at Chevy dealers.

The Chevy Spark EV will be GM's first plug-in car to use the new SAE Combo connector, which includes both a standard J-1772 connector and a new DC fast-charge connector as well, combined into a single plug and socket.

On the new fast-charge standard, Chevrolet says, the Spark EV can recharge its battery to 80 percent of capacity in about 20 minutes.

Thus far, not a single fast-charge station using the new standard is open to the public in the U.S., but they will come--as Level 2 and the existing Japanese CHAdeMO fast-charge standard have.

For 240-Volt Level 2 charging, the Spark EV uses the same 3.3-kilowatt onboard charger as the Volt. If the pack is entirely depleted (a rare occurrence), fully recharging it on Level 2 charging takes roughly 7 hours.

Compliance car or not?

From GM product chief Mary Barra down through other executives and into the program team, Chevrolet maintained consistently--and repeatedly--that the Spark EV is far more than a compliance car built only to meet California's requirements for zero-emission vehicle sales.

The company wouldn't have made the car as good as it is, executives said, if they simply wanted to "tick a box" on one state's regulations.

The 2014 Spark EV includes a number of elements found in the $40,000 Chevrolet Volt, which add unexpected touches of sophistication and luxe to a car whose lesser siblings start at just $12,995 including delivery.

But it remains to be seen whether Chevy rolls the car out beyond California into other states, whether it offers attractive purchase and lease deals, and whether it devotes significant marketing effort to the Spark EV.

Chevrolet provided airfare, lodging, and meals so that High Gear Media could bring you this first-person report.