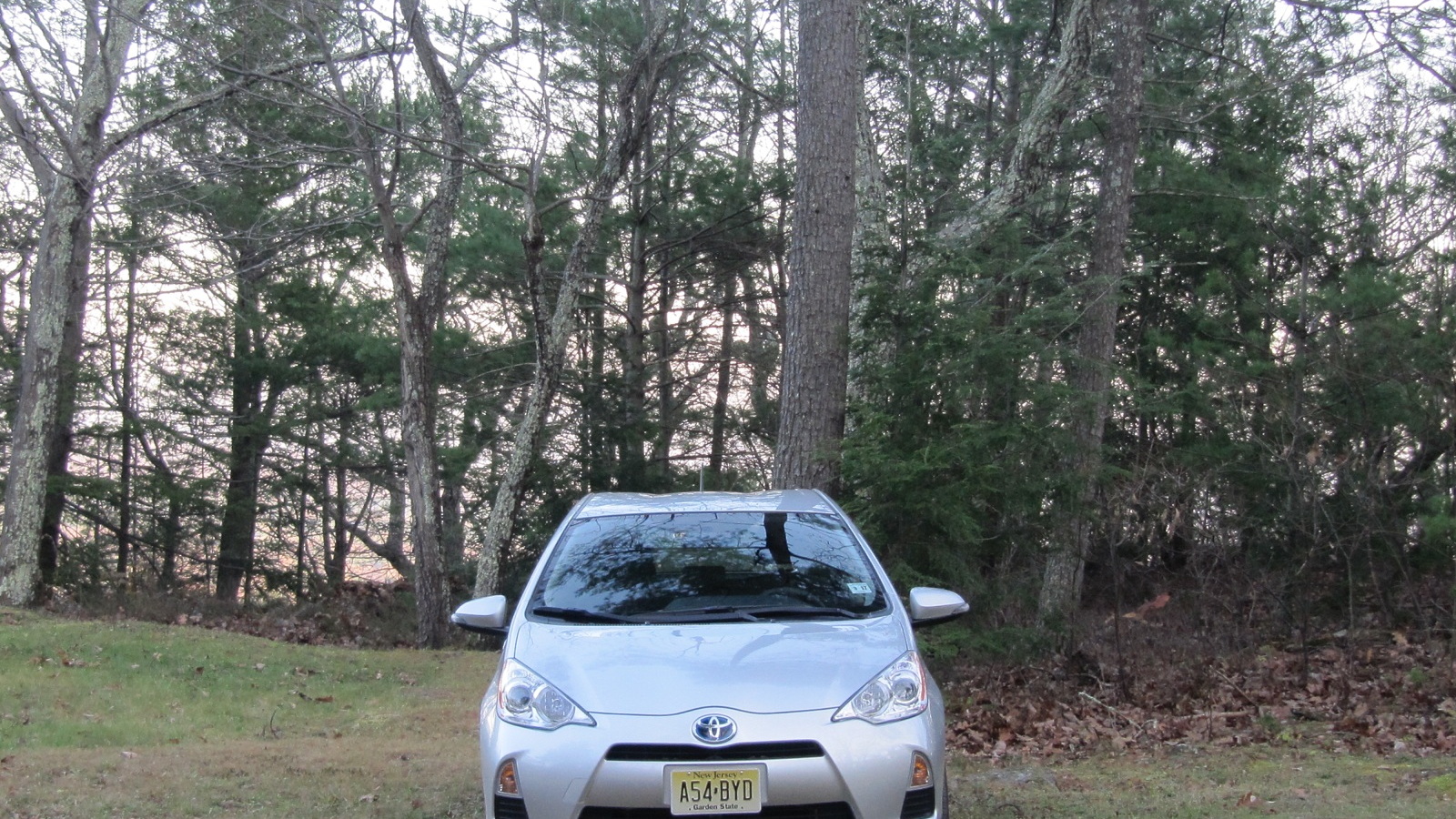 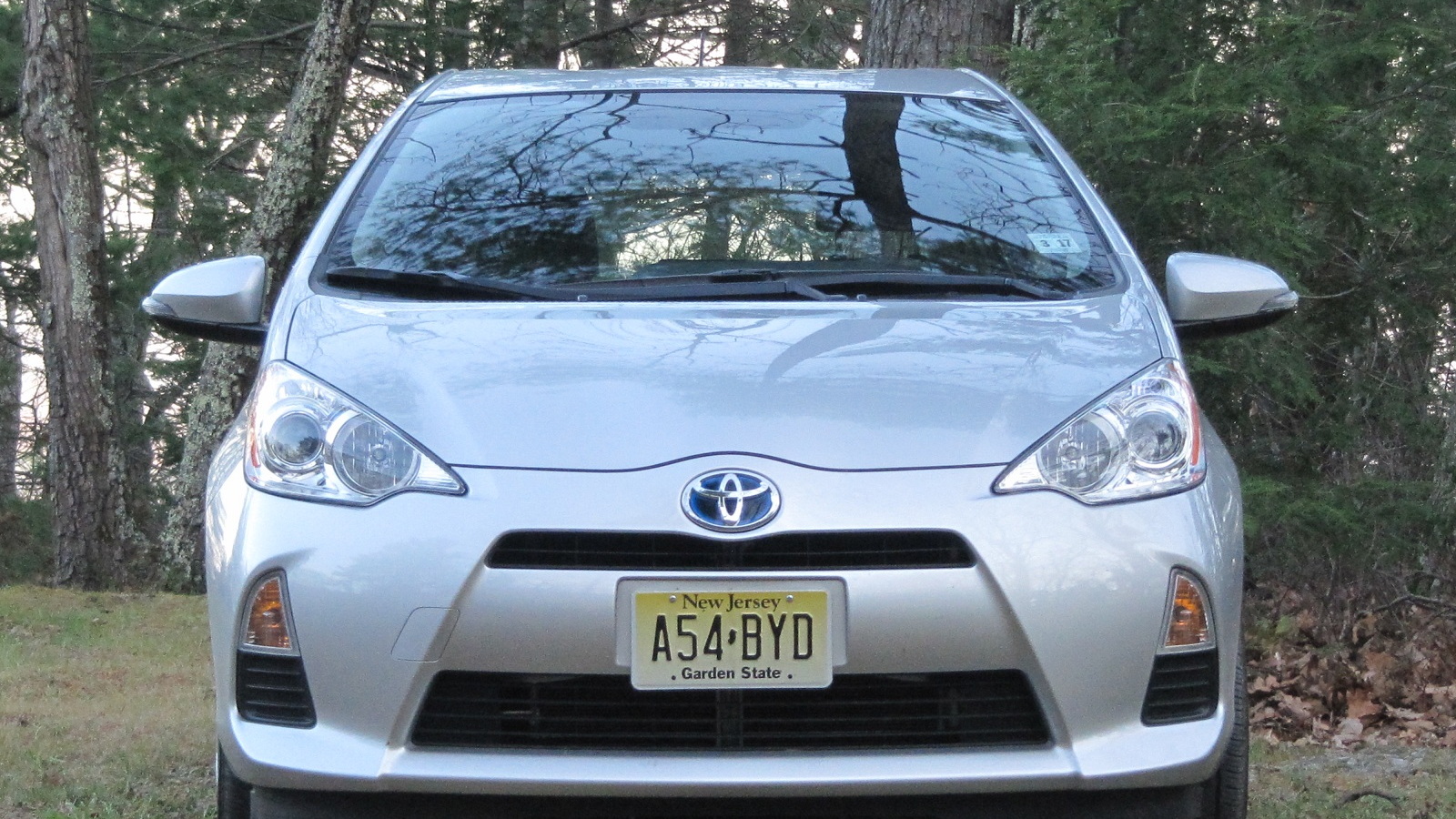 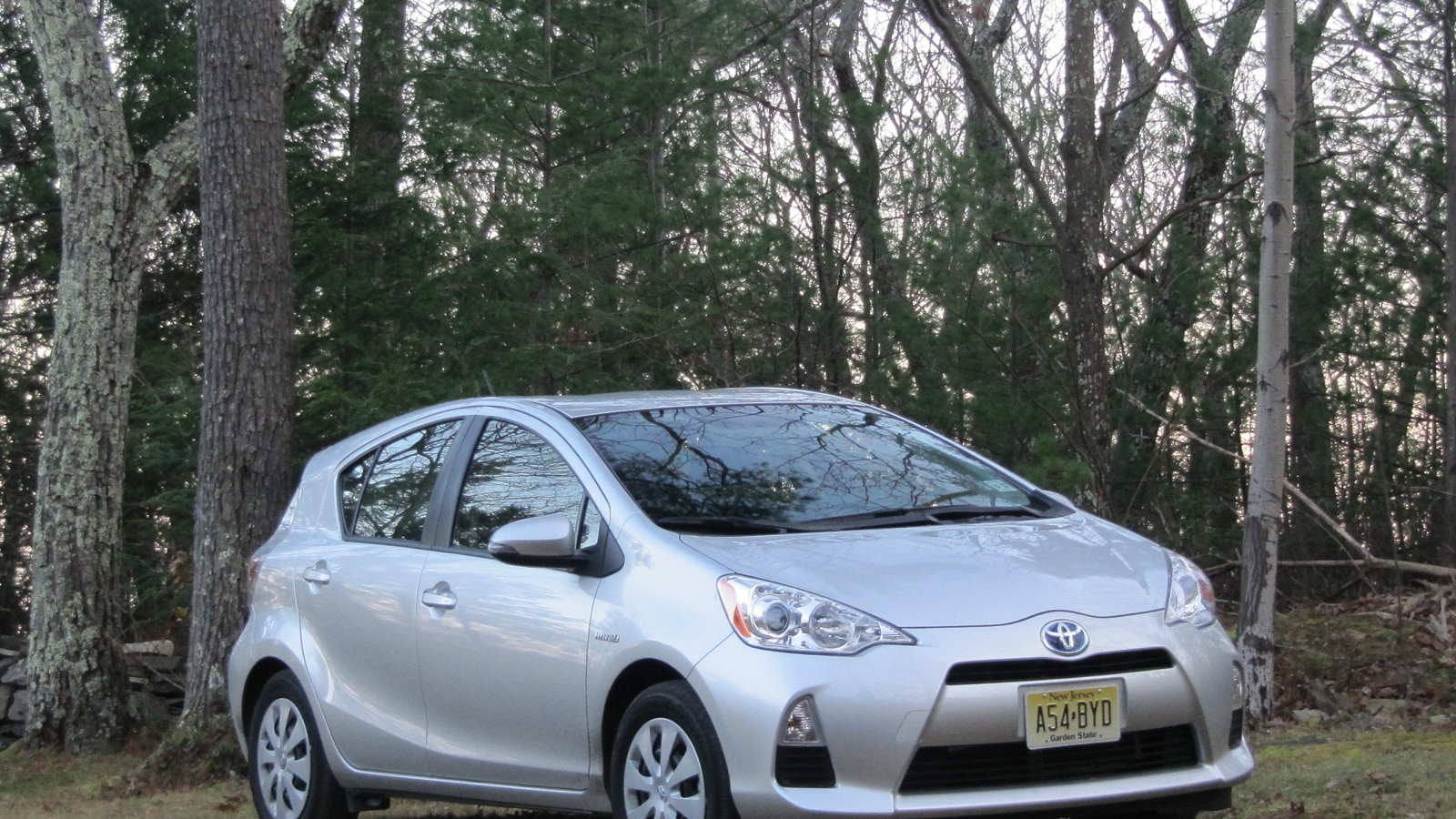 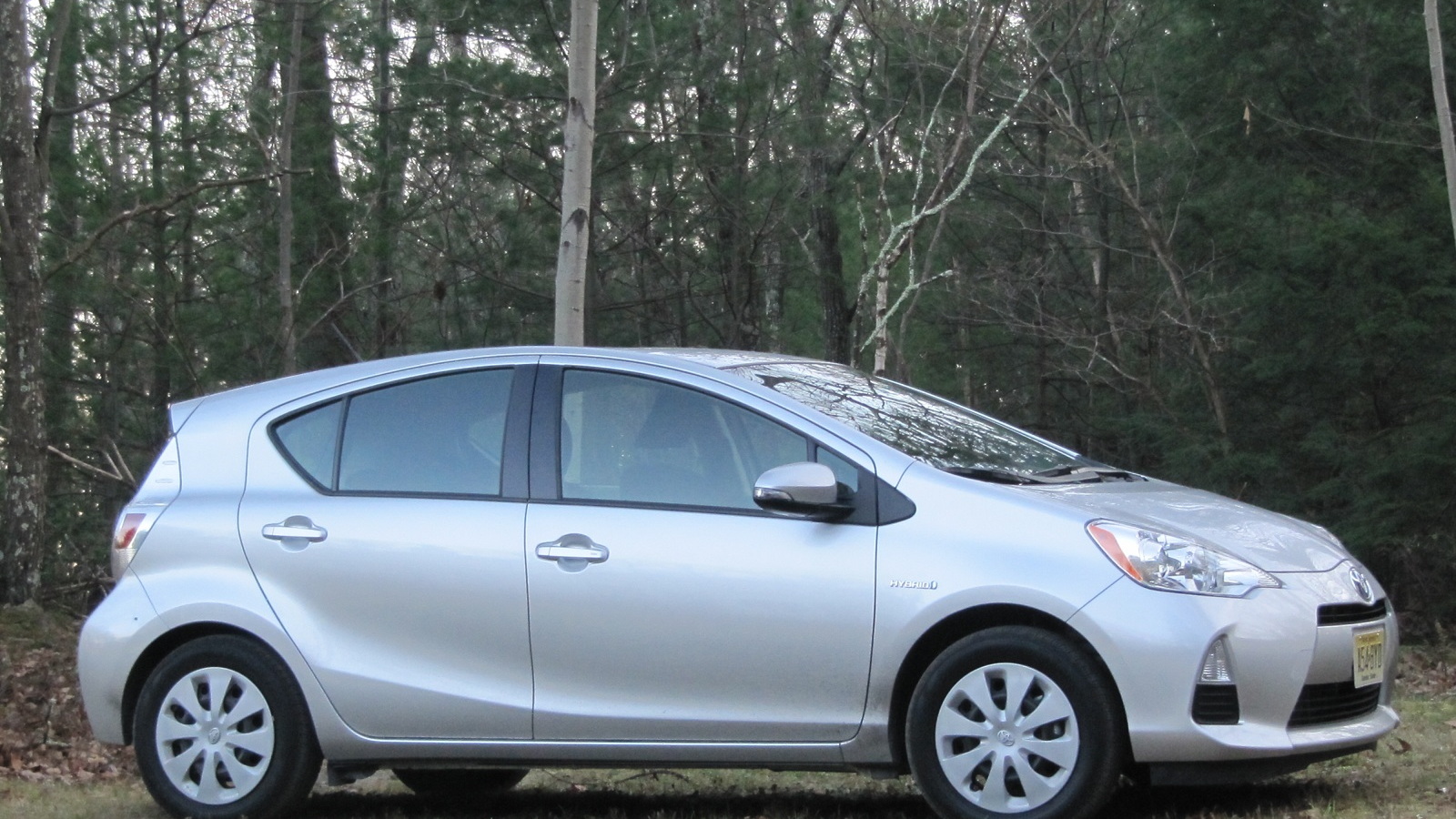 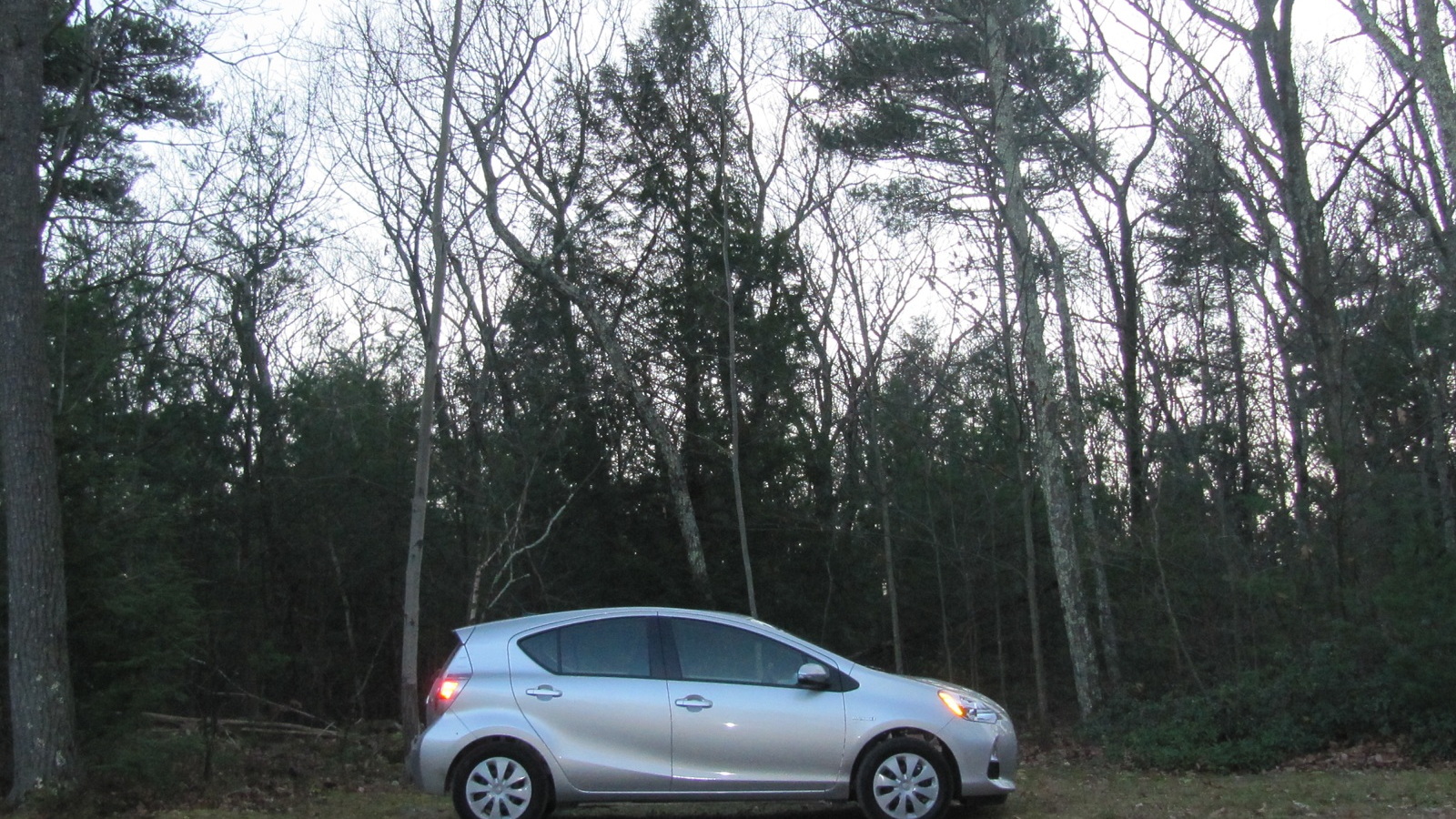 With the 2012 Toyota Prius hybrid family now comprising four members, the subcompact Prius C hatchback is the one least like its siblings.

It's smaller, with a smaller engine and battery, and less cross-section to cause aerodynamic drag.

So does it consume less fuel? The EPA rates it at 50 mpg combined, as it does the larger Prius liftback--but the little Prius C gets a better city mileage rating (53 mpg) and a worse highway rating (46 mpg) than its big brother, which is rated at 51 mpg city, 48 mpg highway.

This weekend, over our usual test route of about 320 miles--which is roughly two-thirds highway and one-third urban and suburban--our 2012 Toyota Prius C test car returned 47.1 mpg.

That's well within the 10 percent margin we allow on the EPA combined rating, and it's an impressively high number.

The second trip odometer setting, which included an additional 117 miles before our tenure in the car, produced 46.2 miles per gallon on average.

Gas mileage aside, we enjoyed the little Prius C. Three days with the car confirmed that it's far more fun to drive than its larger and more ponderous siblings.

Its electric motor moves it away on electric power alone, and if the 1.5-liter engine comes on, the usual driving tricks let you accelerate up to speed and then lift off to revert to electric drive. We saw all-electric travel as high as 45 mph.

While its electric power steering remains irksomely free of useful feedback, the subcompact Prius can be tossed into corners and otherwise hustled through tight traffic more enjoyably than the Prius liftback--though a large rear-pillar blind spot doesn't help over-the-shoulder vision.

The rear window is also shallow, and to get any kind of rear vision at all, we had to remove the rear-seat headrests and leave them on the (flat) floor.

From behind the wheel, the Toyota Prius C hybrid has good, supportive seats and a clearer, more coherent dashboard than the big Prius.

Its energy-flow diagram and other info is displayed on a small full-color display rather than the scattershot arrangement of numbers, graphs, and icons strewn across the wide but short Multi-Information Display of the Prius liftback.

And the little Prius may have more useful storage areas, bins, cubbies, shelves, cupholders, and the like than any car we've driven thus far. We found a space for absolutely everything, from sunglasses to soda cans to toll tickets and cash to tall mobile phones.

If only those cubbies had rubber pads to prevent it all sliding around ... but that's fixable with a trip to the craft store. 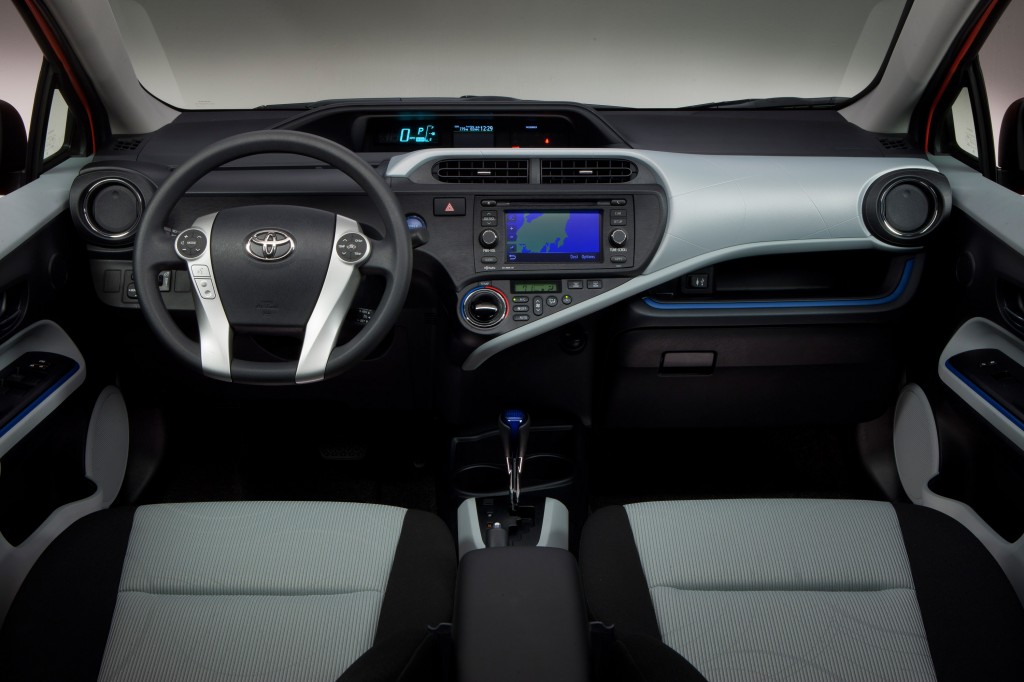 The one chronic drawback to the Toyota Prius C, as we found during our First Drive last spring, is that it's noisy at highway speeds.

Remarkably noisy. So noisy that not only do you have to turn up the stereo a lot, but even front seat riders keep asking to have comments repeated.

We note that Honda added more sound-deadening to its Insight subcompact hybrid hatchback in a 2012 update to the 2010 original. We hope Toyota will do the same. 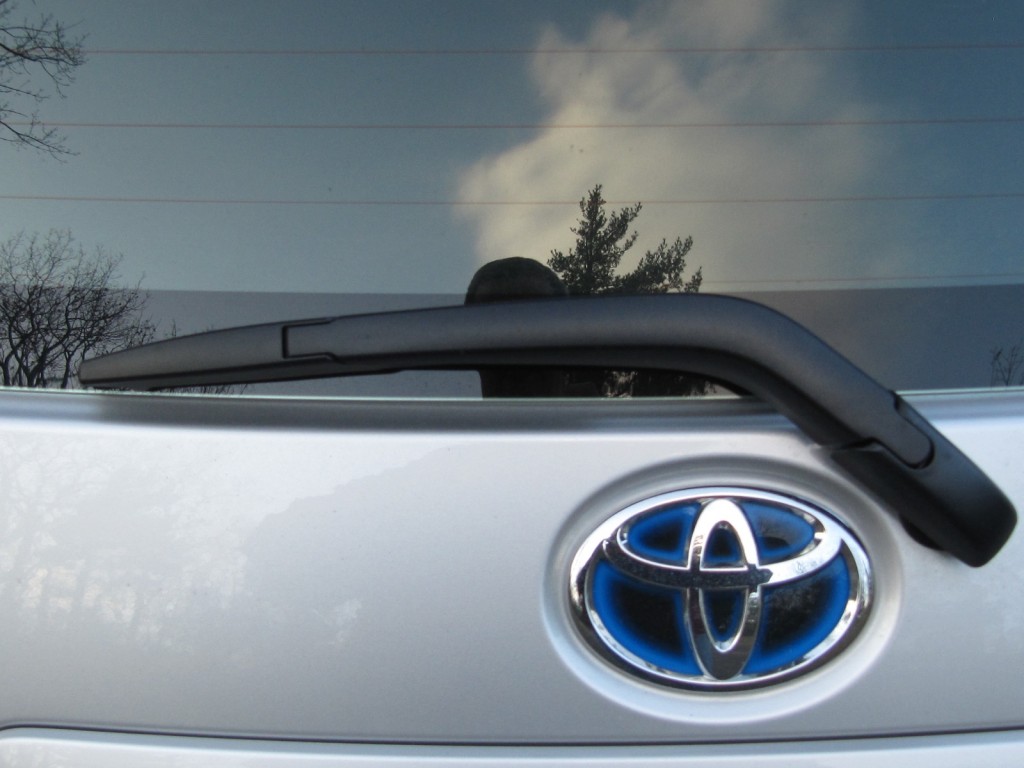 Two other quibbles: It's impossible to run Pandora on a mobile phone through the car's audio system without first installing the Entune app, a step many other automakers don't require.

And the rear shelf over the load bay rattled in our test car, something we've never before experienced in a Toyota.

Otherwise, we liked the 2012 Prius C hybrid, it delivered the promised fuel efficiency--and we got a lot of questions about it too.

For the sake of your ears, we'd recommend it most strongly for buyers who don't spend a lot of time over 50 mph. It's fine at speed--but did we mention noisy?

Our test car was the 2012 Toyota Prius C Three model, the middle of three trim levels. That comes standard with automatic climate control, as do all Prius C models, and also a display audio system with navigation and Toyota's Entune connectivity system, using a 6.1-inch in-dash color touchscreen display.