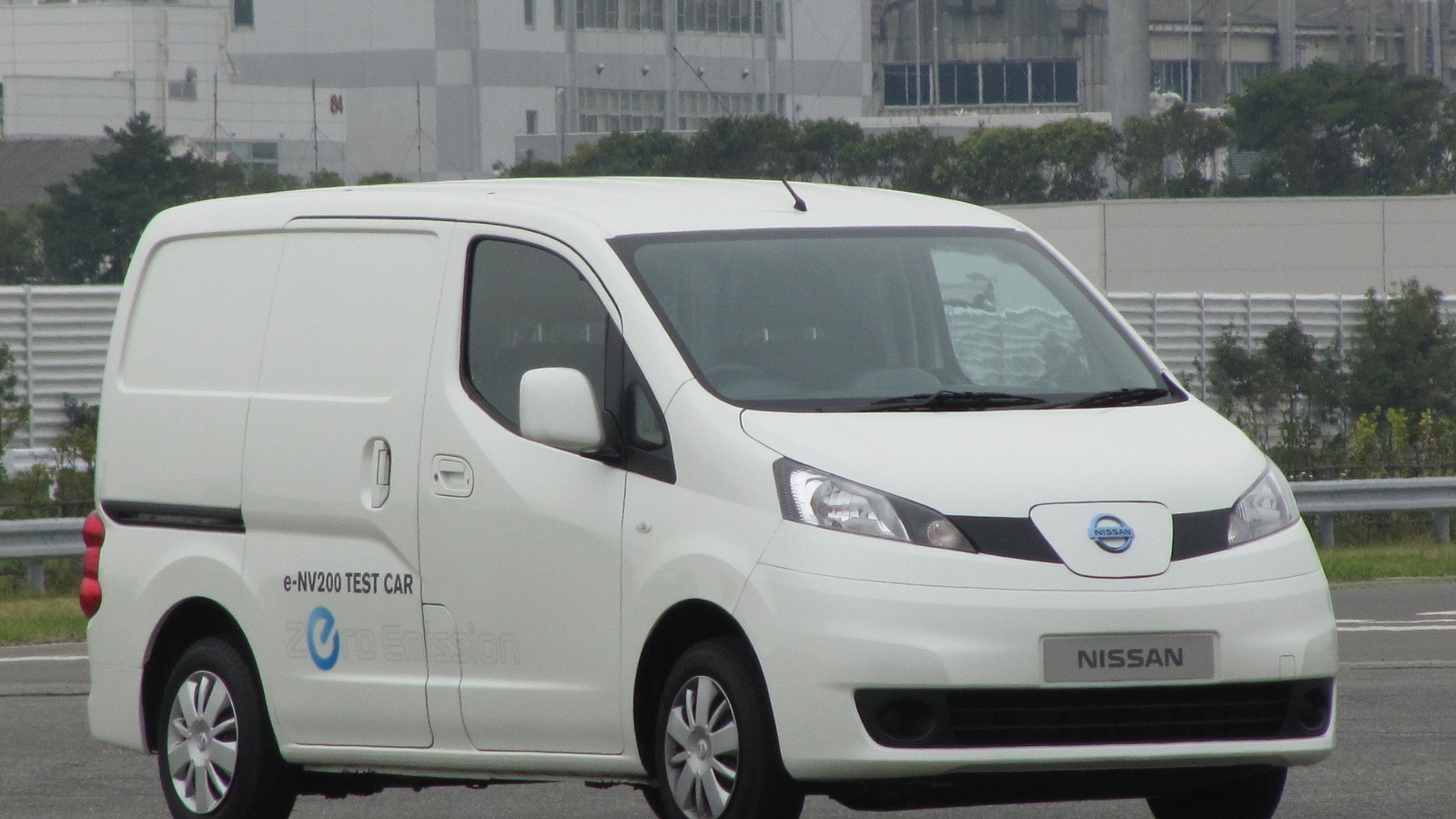 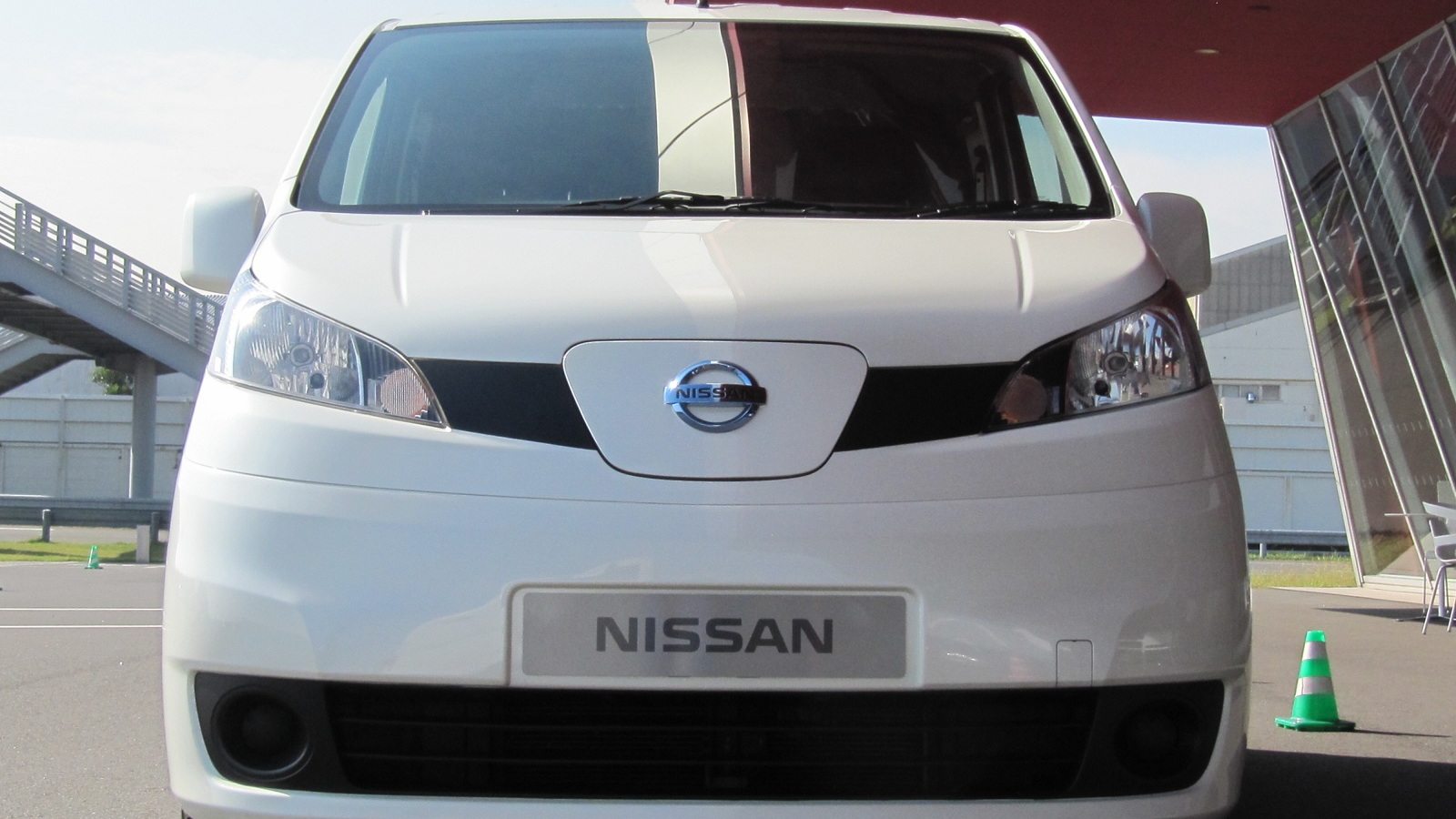 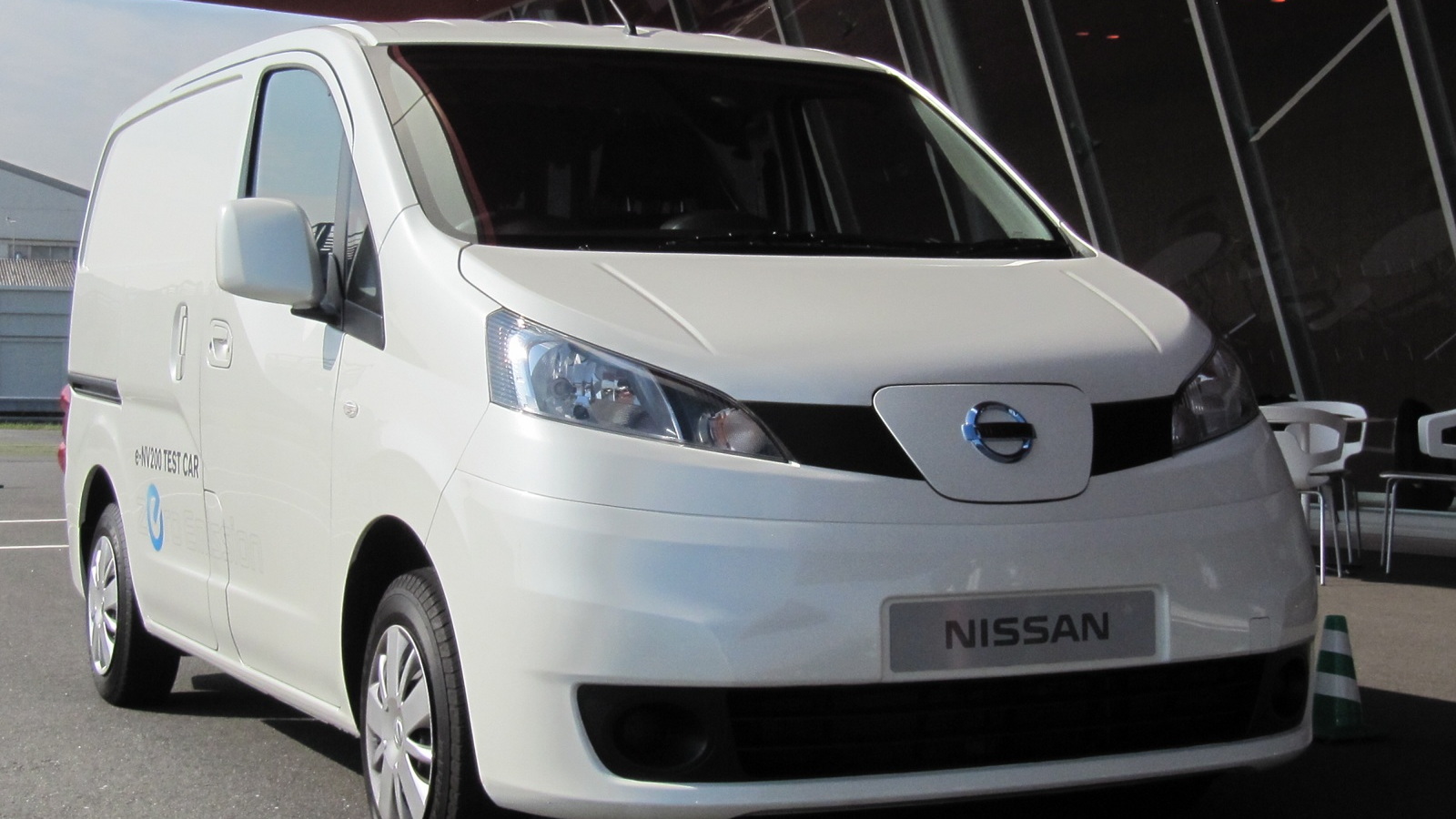 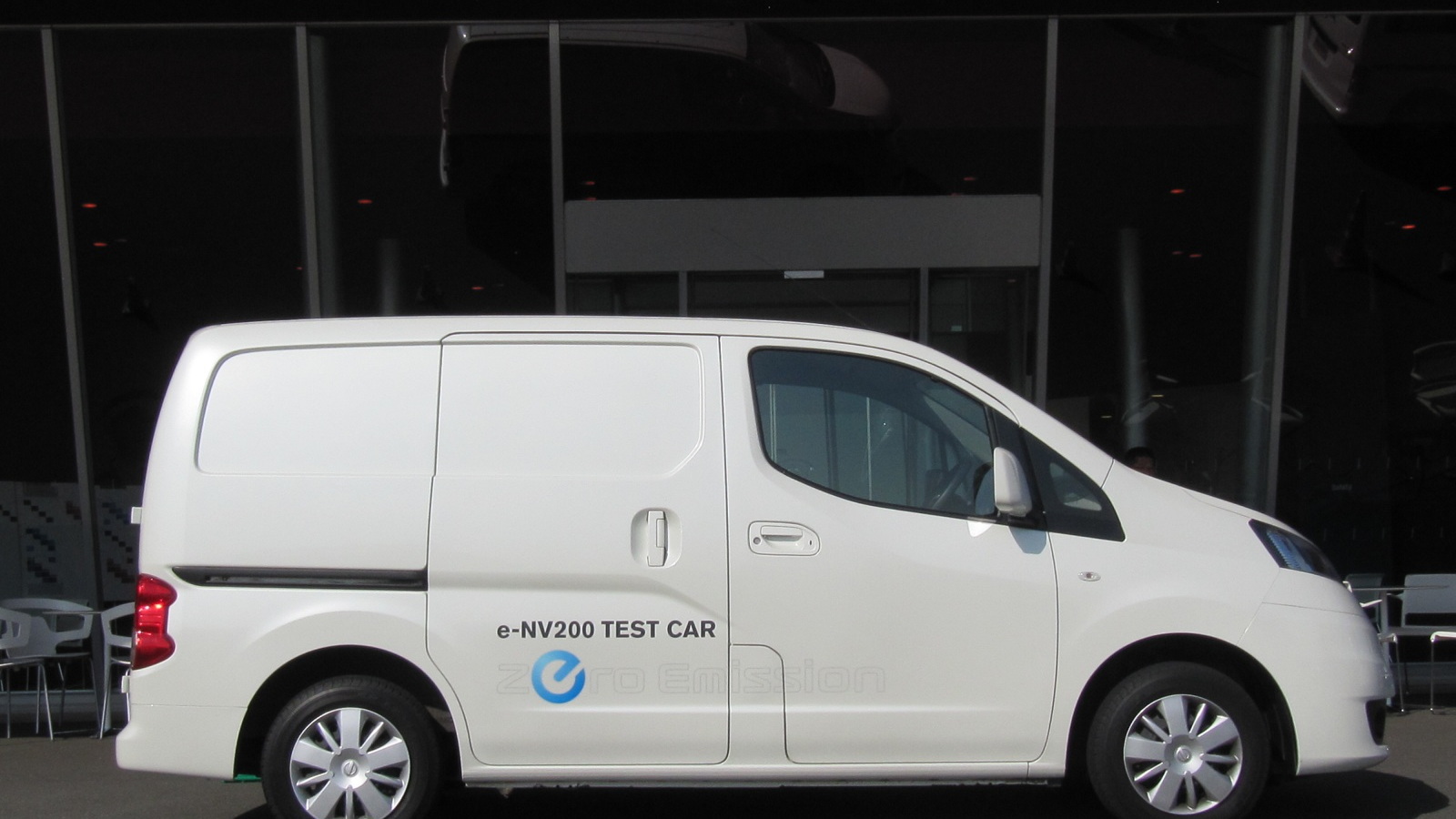 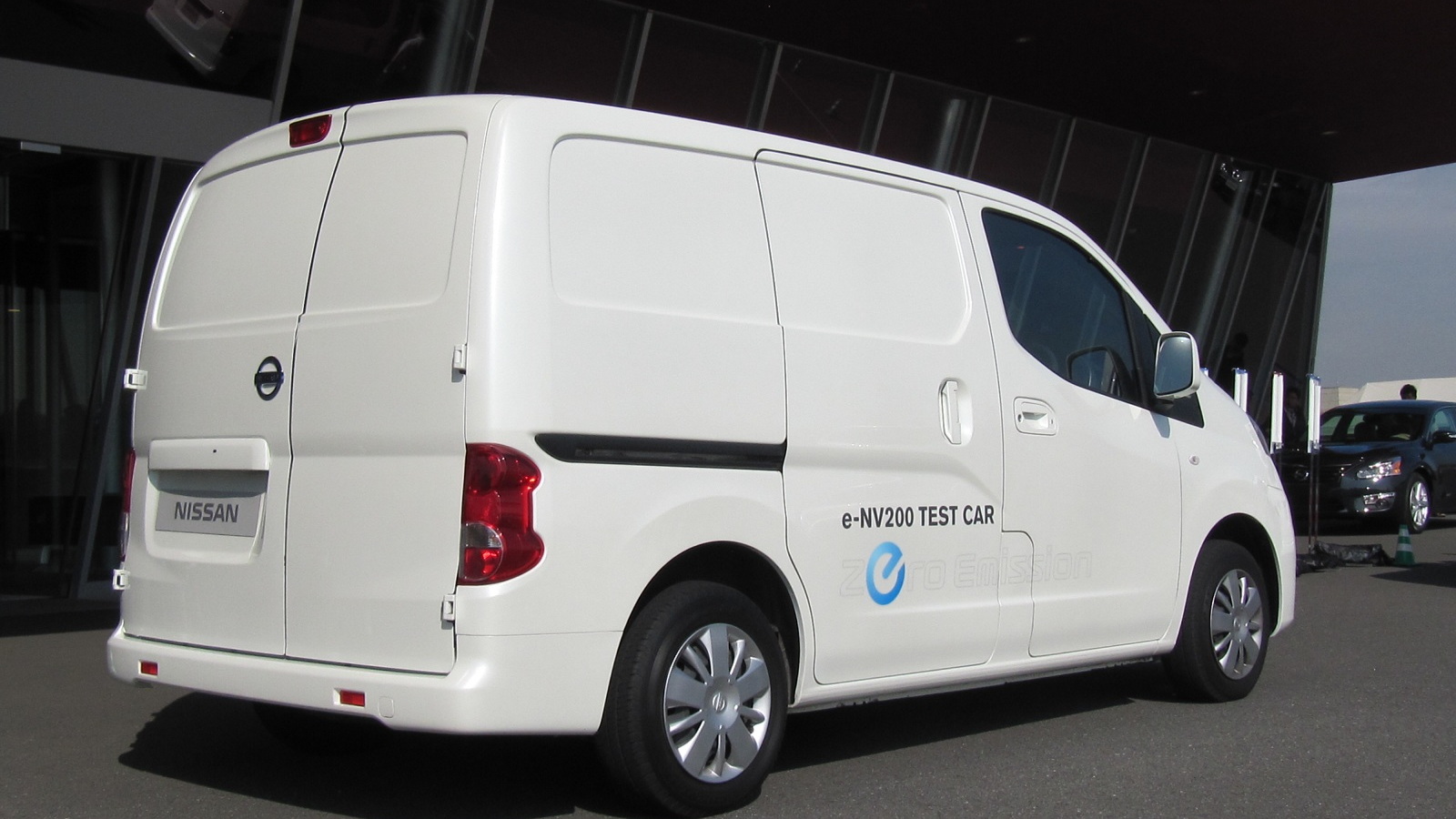 Small delivery vans are a new category in the United States, but Nissan has big plans for its small NV200 delivery van--and among them are an all-electric version.

The prototype Nissan e-NV200 electric minivan was one of several vehicles available to drive on the test track at Nissan's GranDrive facility in Oppama, Japan, part of its annual Advanced Technology Briefing for journalists.

The NV200 minivan was designed from the outset for gasoline and electric power, and the electric version uses the Nissan Leaf hatchback's 24-kilowatt-hour battery pack and 80-kilowatt (110-hp) electric motor driving the front wheels.

The electric minivan was certainly peppier than the comparable gasoline-powered version, which is sold with a 1.6-liter four-cylinder engine and five-speed automatic transmission.

Both models were loaded with several hundred pounds of weight in cardboard boxes, standing in for the cargo load such a van might be called on to deliver in an urban setting.

And while the gasoline version howled a bit and had to shift down to accelerate out of a fast sweeping curve, the electric version simply whined a little louder and gathered speed quickly.

Nissan engineers said, in fact, that they'd received surprising feedback from the fleet managers now testing the e-NV200 in Tokyo, London, and elsewhere.

The acceleration of the electric van, those users said, should be less responsive--requiring the drivers to press harder to get access to the plentiful electric torque available off the line.

After its U.S. introduction at January's Detroit Auto Show, the e-NV200 is headed to the U.S. for testing soon.

But the right-hand drive version we drove briefly was one of only a handful of development prototypes currently on the road.

Nissan's development staff wouldn't comment on anticipated range or performance figures, and we did no formal timing tests in our laps around the track.

But because the e-NV200 is a taller, wider, heavier vehicle than the Nissan Leaf whose powertrain it shares, it would likely gain an EPA rating of less than the Leaf's 73 miles of electric range (assuming there are no changes to the 24-kWh battery pack).

An electric version, the Transit Connect Electric, was briefly offered by Azure Dynamics. About 500 were sold before Azure declared bankruptcy in March of this year.

A lengthened version of the NV200 has been chosen as New York City's 'Taxi of Tomorrow' and will start to hit Gotham streets in 2014.

While no firm plans for electric NYC taxis have been announced, the potential for a battery-electric taxi was clearly part of the city's decision to choose Nissan's design over two other competitors.

Nissan also had no comments on potential family minivan versions, and for the immediate future, the company seems likely to concentrate on the small commercial market--with NV200 versions using both gasoline and electric powertrains.