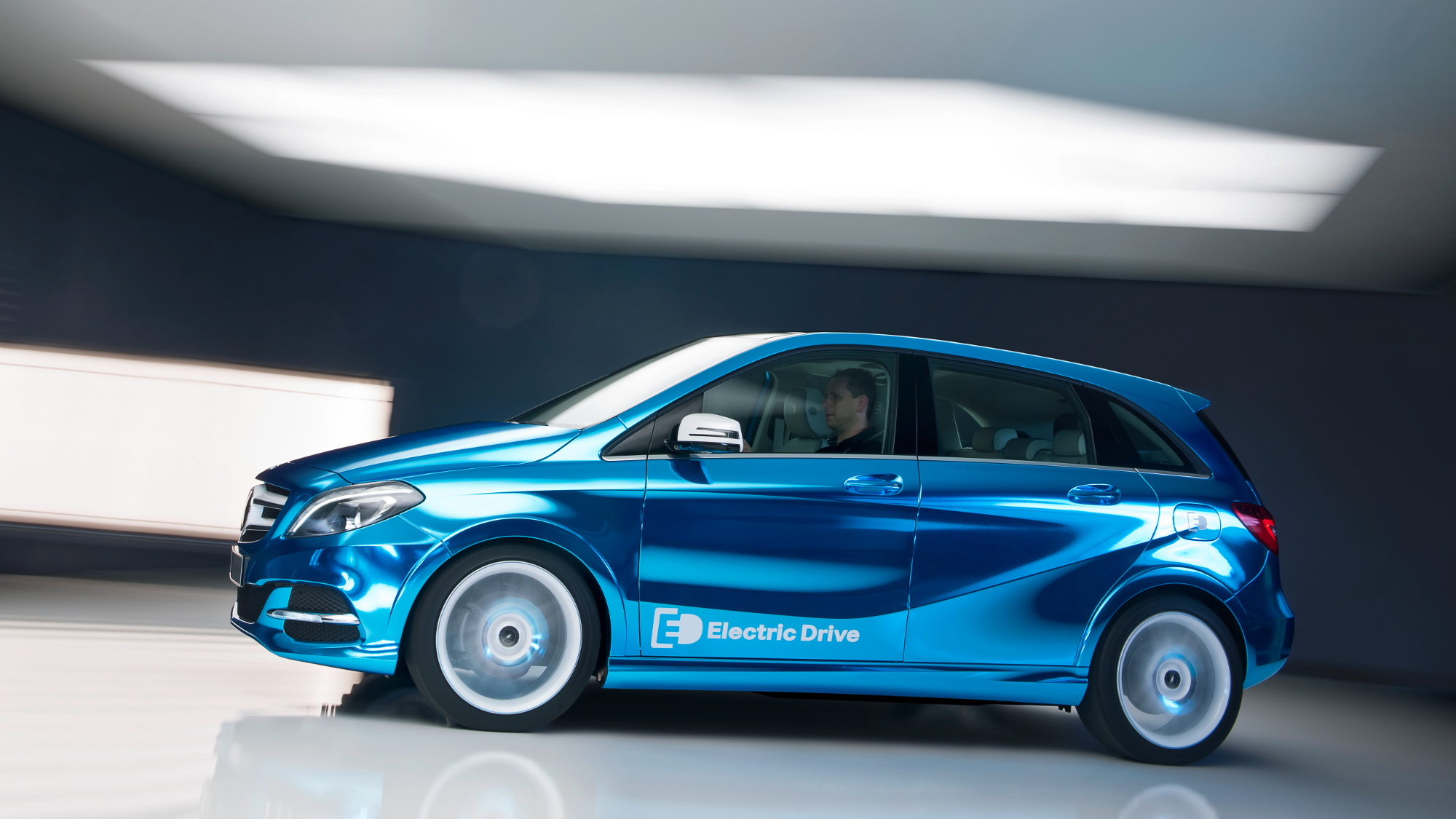 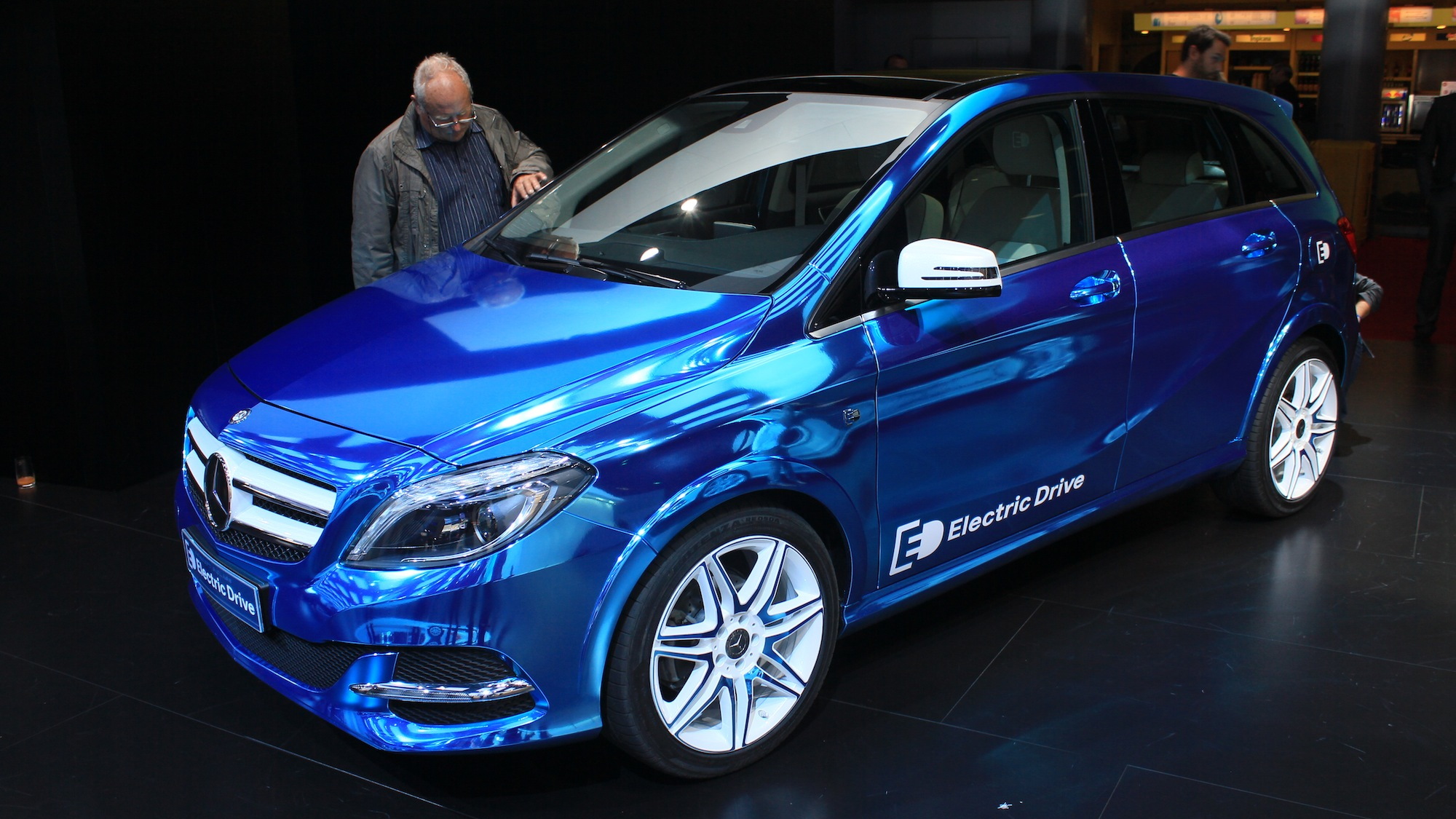 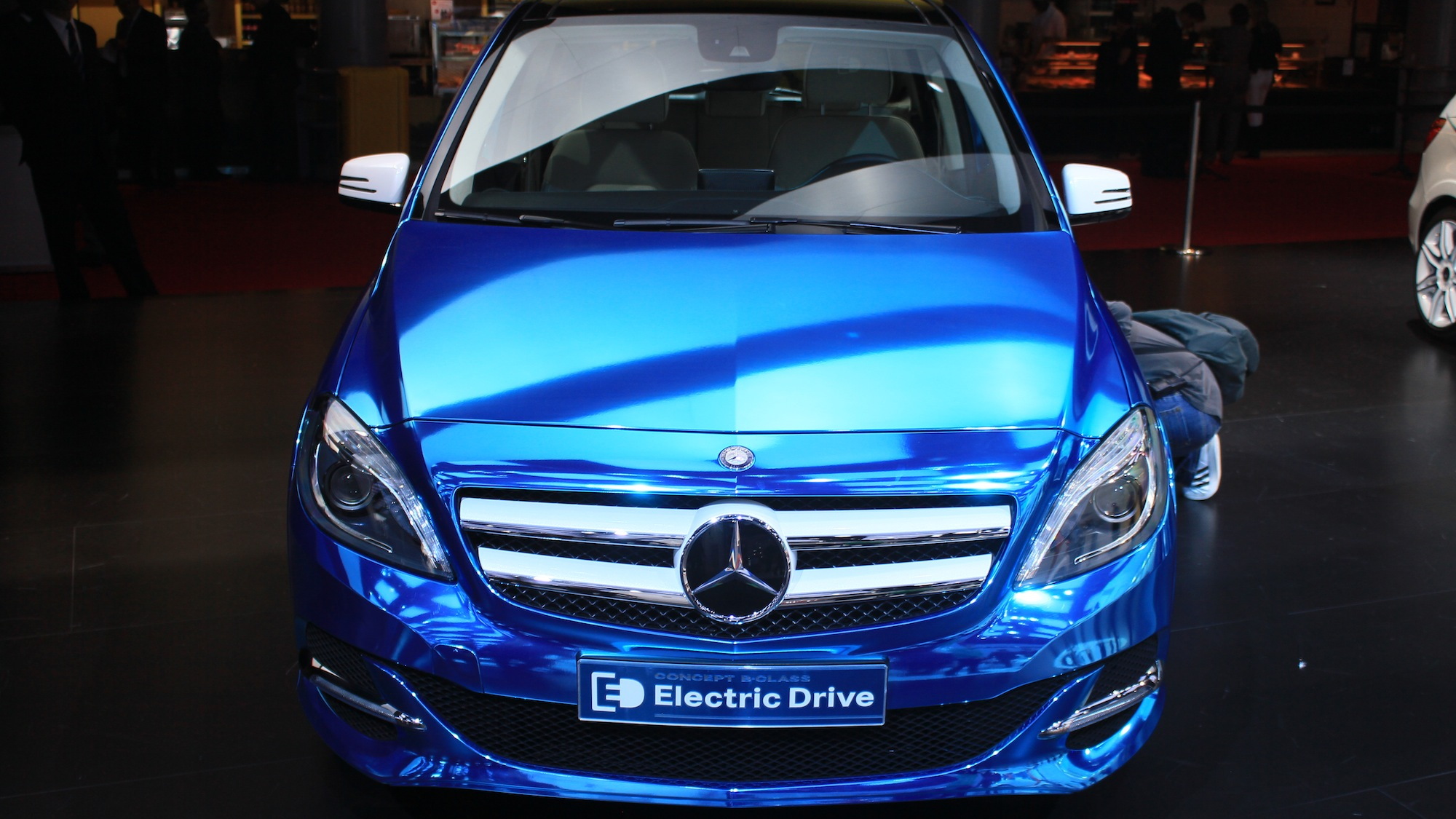 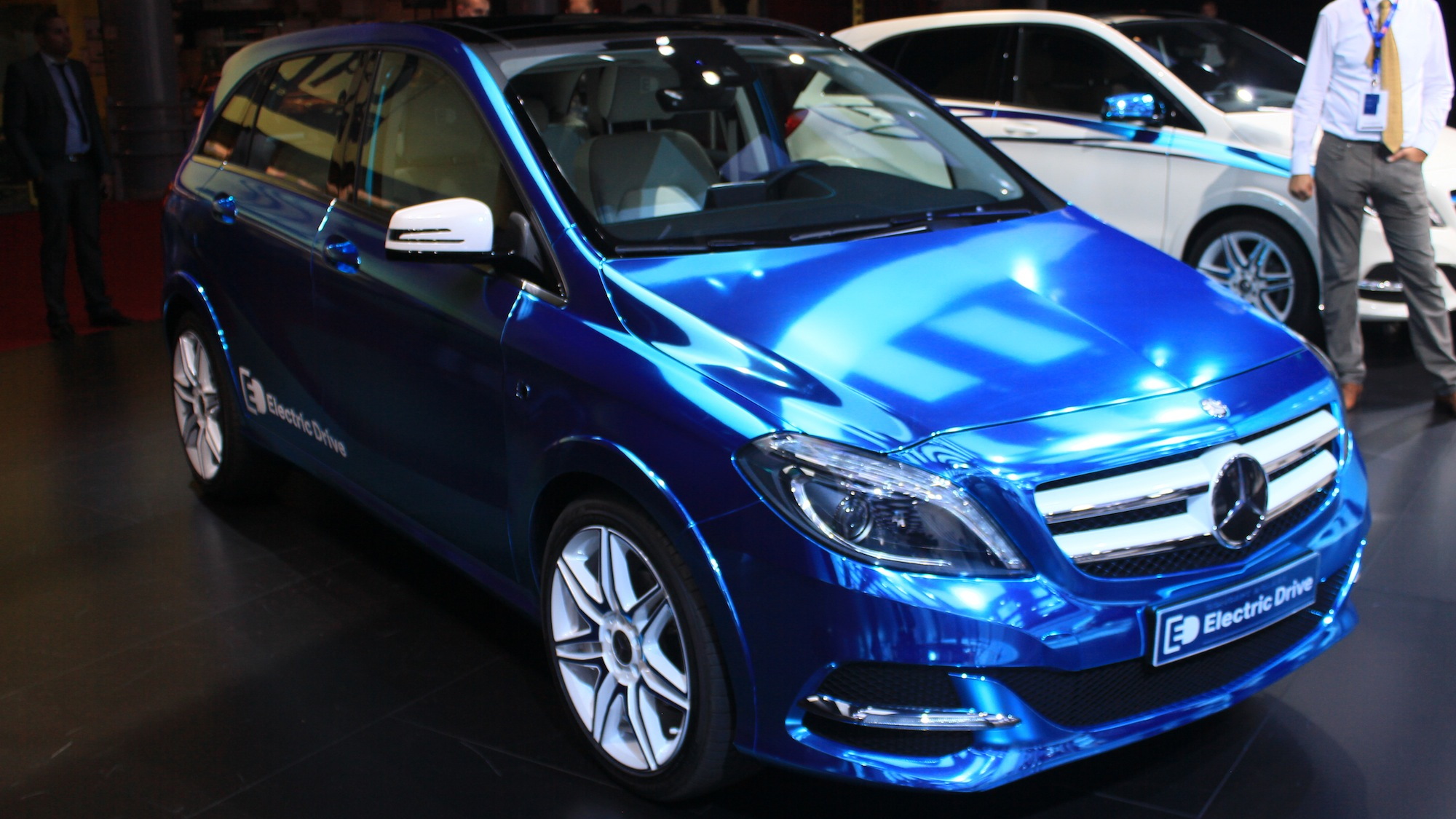 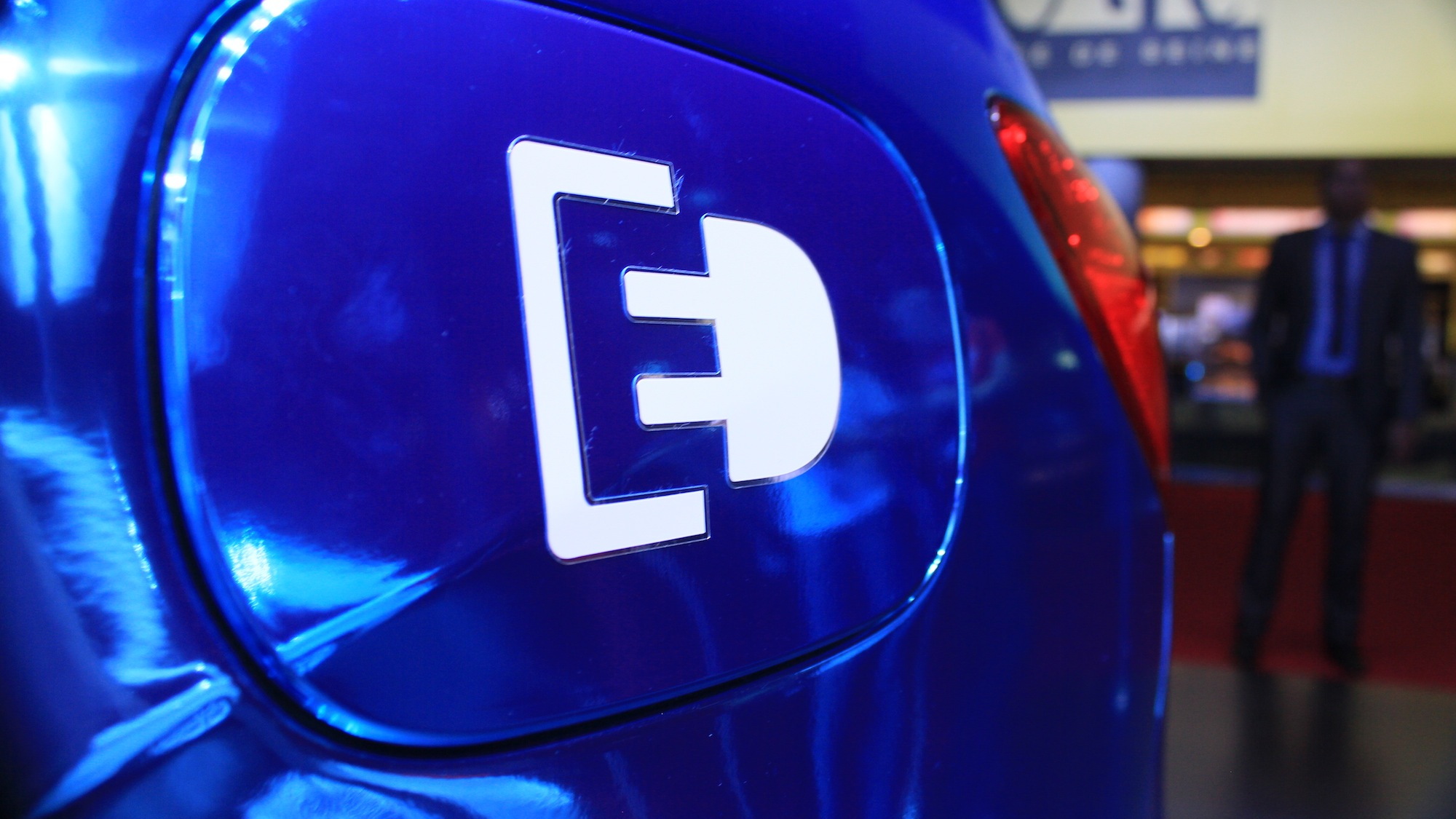 It's hard to miss a Mercedes-Benz compact hatchback when it's wrapped in a shiny blue-chrome finish.

That was the attention-grabbing color the luxury German maker used at the recent Paris Auto Show to distinguish its two electric models, the 2014 SLS AMG Electric Drive all-electric supercar and the new B Class Electric Drive concept.

The all-electric compact hatchback comes with a powertrain designed and built by Tesla Motors [NSDQ:TSLA], and the version shown in Paris is very close to the production car that'll go on sale in Europe next year, probably as a 2014 model.

It'll be offered in the U.S. market too, though prices and regional availability haven't yet been discussed by Mercedes-Benz.

Car and Driver reports that the all-electric model will be the only version of the Mercedes-Benz B Class to be offered in the U.S.--though other models built on its platform will arrive here, with gasoline engines.

The previous-generation B Class was sold in Canada, but never in the U.S.

The "Concept B Class Electric Drive" shown in Paris used a Tesla-designed electric motor, with peak output of 100 kilowatts (134 hp) and 228 lb-ft of torque, to drive the front wheels.

The 36-kilowatt-hour lithium-ion battery pack, which sits inside the "sandwich floor," is also designed and built by Tesla, most likely using the same modules that go into the batteries for the 2012 Tesla Model S electric luxury sport sedan.

Tesla uses the same modules in the battery of the 2012 Toyota RAV4 EV as well; that electric crossover utility went on sale last month in California.

At the Paris show, Mercedes-Benz claimed a range of 125 miles for the B Class Electric Drive. That should translate to an EPA range rating of roughly 100 miles.

Regrettably, the B Class Electric Drive will only be sold in sufficient numbers to let Mercedes-Benz comply with California's zero-emission vehicle mandate.

That's the year in which the California law expands beyond the six highest-selling carmakers in the state, so Mercedes-Benz too will then have to have its own "compliance car".

The five-door, five-seat configuration of the electric B Class should give the electric Mercedes-Benz compact a wider appeal than the little two-seat 2013 Smart Electric Drive model, whose sales will also help the company comply with the California law.

Mercedes-Benz has now replaced its previous "E Cell" label with the more understandable "Electric Drive" suffix for all its battery-electric vehicles, from the little Smart all the way up through the SLS AMG supercar.