After the devastating earthquake and tsunami that hit Japan in March 2011, Japanese automakers Toyota, Nissan and Mitsubishi have all been working on technology designed to let electric cars provide emergency backup power.

So far, we’ve seen a range of applications for backup electric car power stations, from being a low-powered, 1.5 kilowatt mobile power station to running traffic lights in down-town Tokyo, but now Nissan has launched a product which combines faster home charging and a backup power solution for the home.

Called Leaf To Home, the system connects to the rapid DC quick charging port fitted as standard to the 2012 Nissan Leaf SL, providing up to 6 kilowatts of charging power. That’s double the on-board charging capabilities of the 2011 and 2012 Nissan Leaf -- and enough to fully charge from empty in around 4 hours.

In essence, the Leaf to Home system could give existing Leaf owners a way to charge their Leafs up at home at the same speed as the on-board charger in the 2013 Nissan Leaf, but the real purpose of the Leaf To Home system is its ability to use a Nissan Leaf to provide domestic power to the home when required.

Once installed and connected to the domestic power circuits, the Leaf to Home system can the draw power as required from the Leaf’s battery pack to provide power to the home. 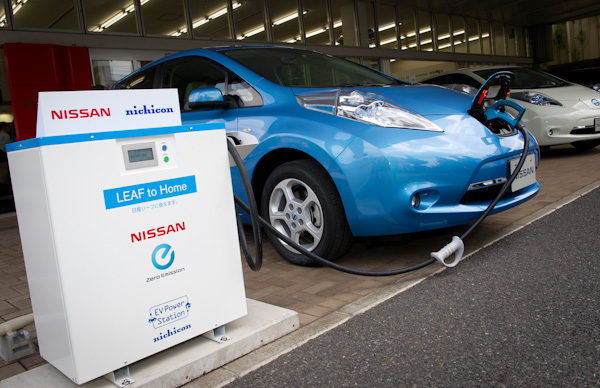 Primarily useful in a brownout or natural disaster, the system means that power can still be provided even if the utility company cannot.

Since most cars only travel 30 miles or less in a day however, the system also offers the potential of helping the homeowner save money on their electricity bills, fully charging the leaf at lower night-time rates and then using excess battery capacity during the day to power the home.

There is, sadly, a catch.

At around ¥330,000 installed ($4,184), the Leaf to Home system isn’t particularly cheap, but it does offer a real, commercial solution for those wanting to power their home from their car.

Sadly, Nissan hasn't said if the system will be sold in the U.S., but has hinted it will work with suppliers in countries outside of Japan if demand is high enough.