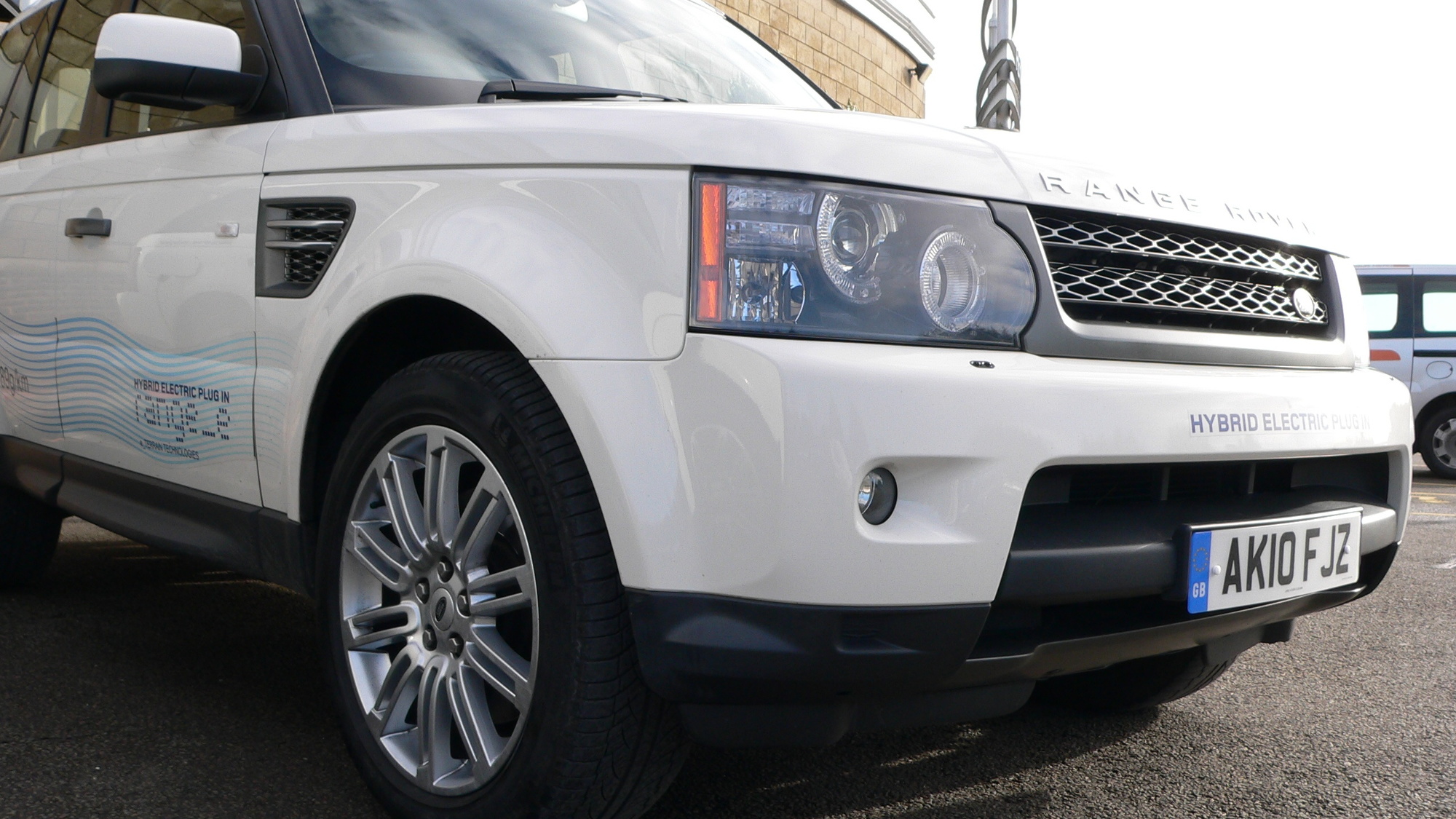 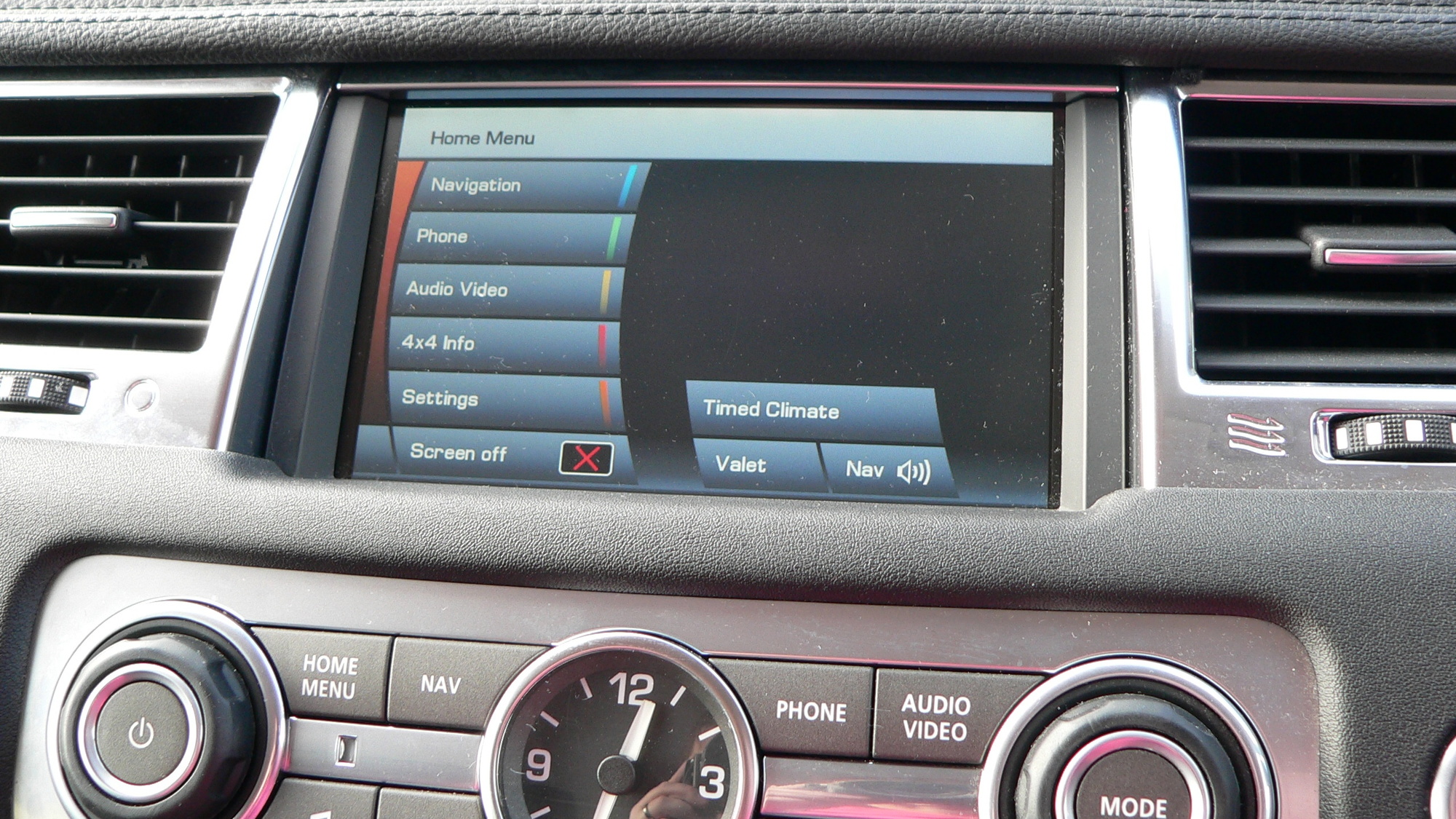 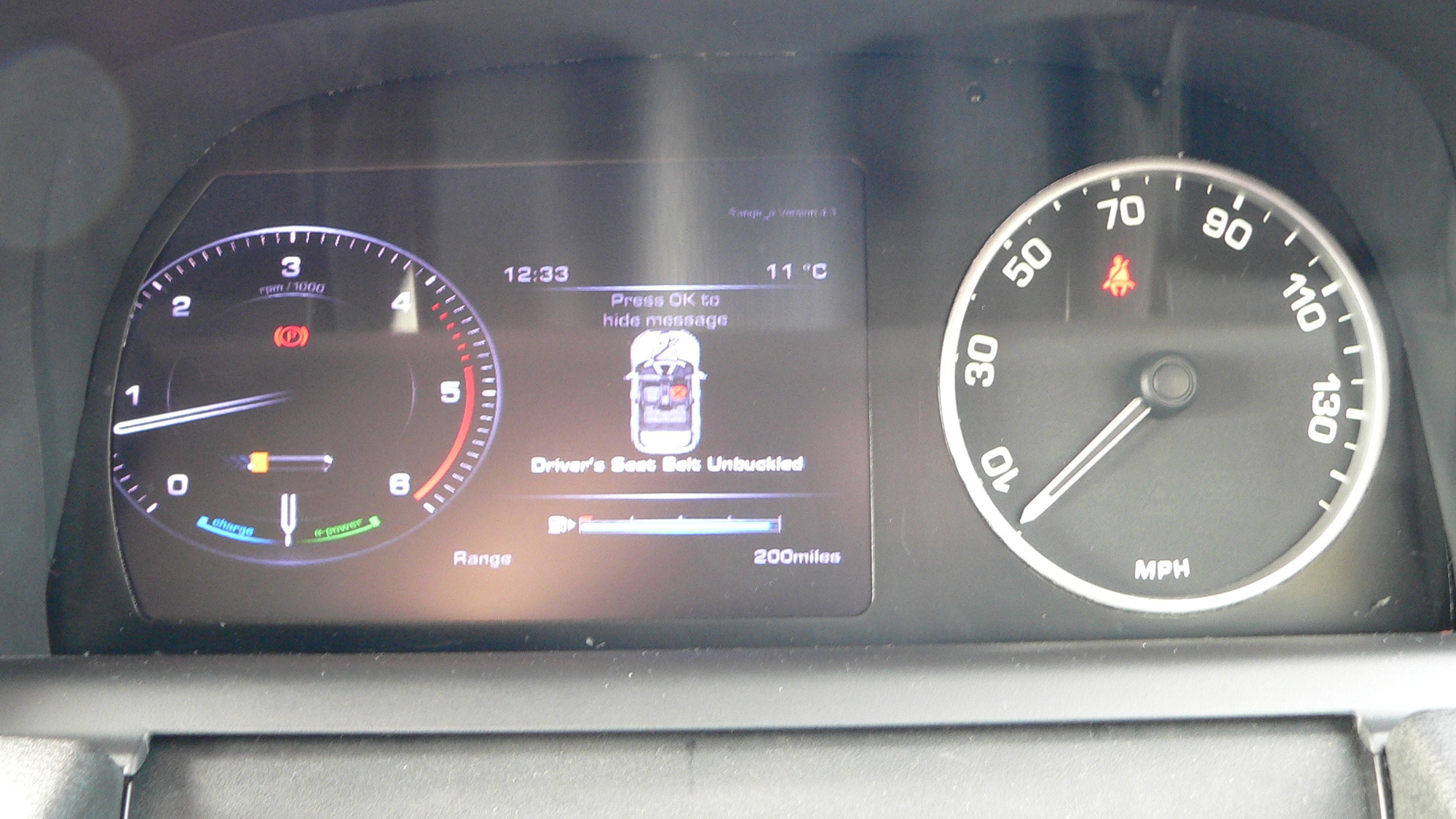 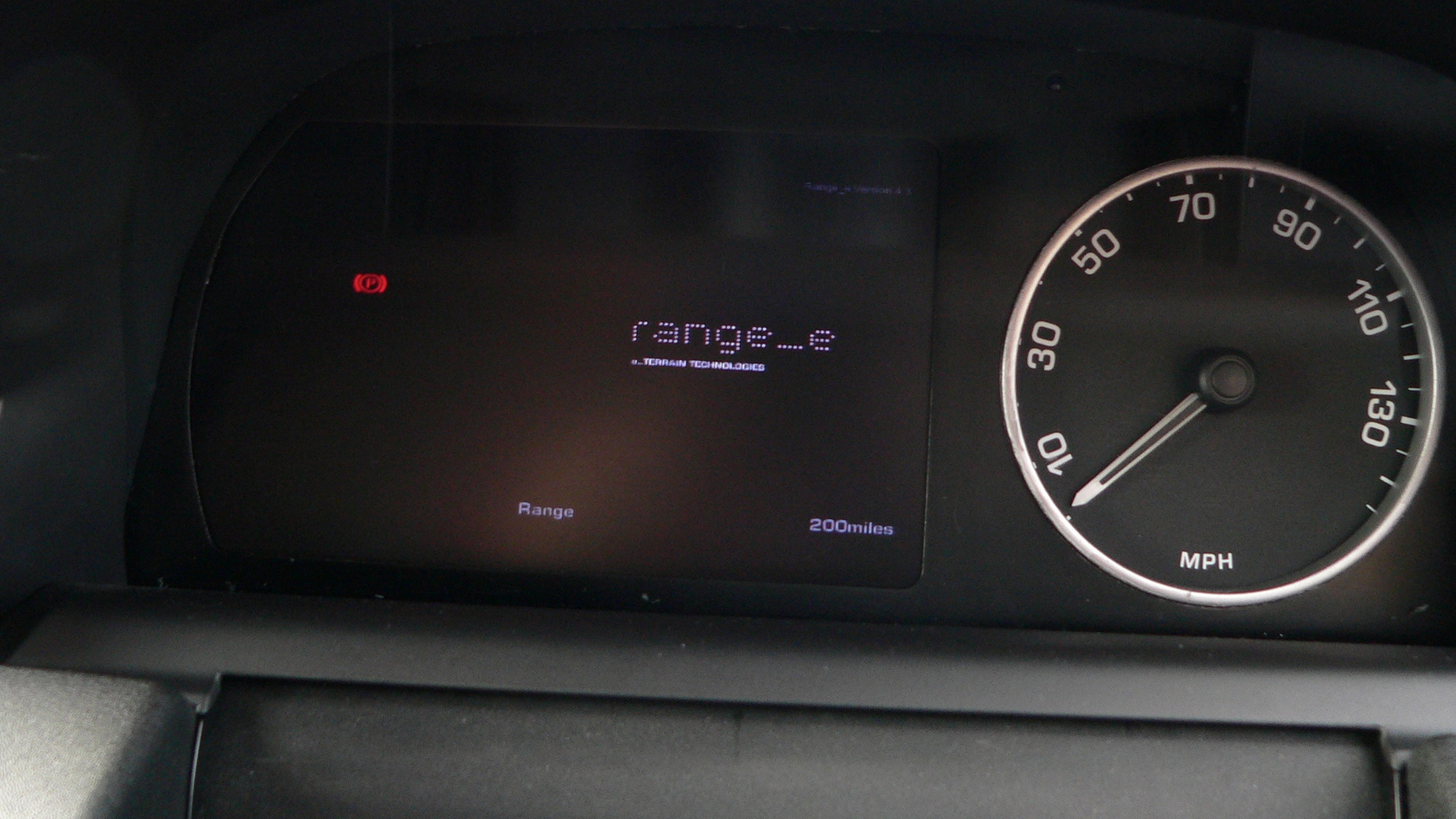 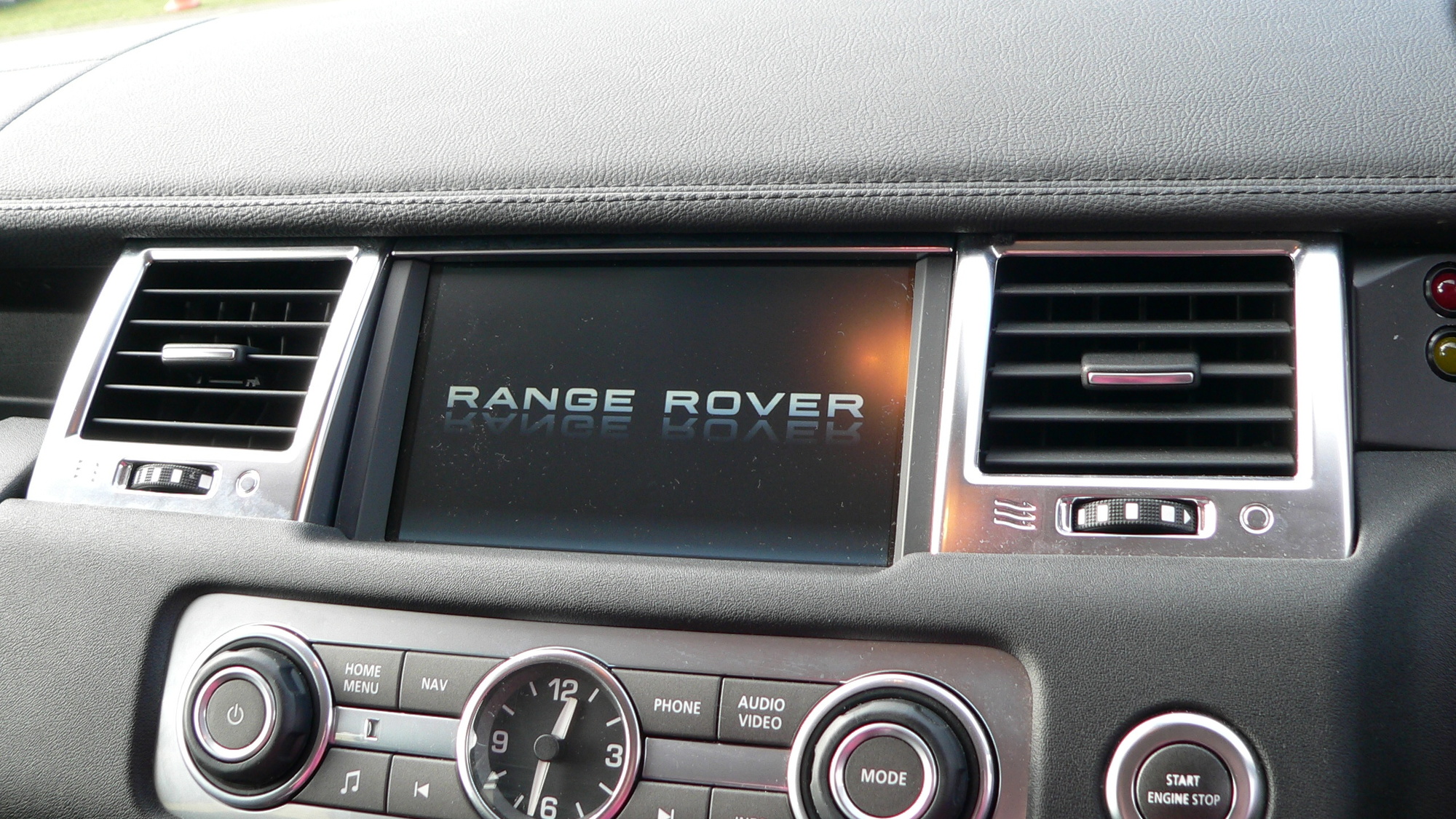 Then in October last year -- purely by chance -- we bumped into one of Land Rover’s five engineering test Range_e prototypes in a shopping mall parking lot the weekend before it was due to take part in the annual RAC Green Car Challenge from Brighton to London, U.K.

Like the rest of the automotive press however, we had to wait until last Friday to get behind the wheel at a special Land Rover Jaguar joint press day.

From a distance, the Range_e plug-in hybrid prototype looks identical to the 2011 Range Rover Sport.

Get closer, and it becomes obvious that the Range_e isn’t just another gas-guzzling SUV.

On the rear right quarter panel, there’s the usual fuel filler flap -- but move to the left-hand quarter panel and there are two additional filler flaps hiding J1772 and fast charging connectors.

As we climbed aboard, Land Rover’s engineers were keen to point out that the Range_e is still very much a prototype. But aside from a few extra engineering buttons and the lack of a centre rear seat, the Range_e we drove looked almost ready for market.

But with only 10 minutes behind the wheel, a 14.2 kilowatt-hour battery pack left almost empty by previous test-drives, and nothing but sleepy English village roads to drive through, how ready it really was proved tough to ascertain.

Land Rover says the Range_e can travel for more than 20 miles in all-electric mode at highway speeds, but as soon as our test vehicle accelerated onto the rural road test route, its 3.0-liter V-6 clean diesel engine started to run, presumably due to the low battery state of charge.

We noted however, that a hard acceleration from all-electric into blended hybrid mode results in a one-second lag in power delivery -- hardly what you need when pulling away from an intersection.

Just like the 2012 Toyota Prius however, a smoother right foot yielded a more acceptable blend between power modes.

When it came to braking, our test vehicle didn’t have the regenerative braking fitted to some range_e prototypes.

As a consequence, our Range_e prototype felt very much like a regular Range Rover Sport, with weight distribution, cornering and braking all on a par with a regular gasoline model.

The biggest noticeable difference however, came under blended mode acceleration.

As the double-ended 69-kilowatt electric motor replaces the traditional transfer case found in four-wheel drive vehicles, it can provide all-electric all-wheel drive. Further, because of the motor's location, the Range_e can operate in electric-only, diesel only or blended modes.

Essentially a series-parallel hybrid, this means the electric motor can help eliminate the lag in power normally associated with turbocharged engines, meaning acceleration is smoother and more responsive.

Land Rover claims the Range_e can hit 120 mph, and a “respectable” 0-60mph time. Sadly however, our test route -- and time constraints placed on us by Land Rover -- prevented  acceleration tests.

Land Rover employees on hand during the day were keen to point out that the Range_e isn’t a ready-for-market vehicle. Nor is it destined to be.

Instead, Land Rover wants to use the Range_e exclusively as an internal test-vehicle, feeding data from the project into REEVolution -- a joint project between Land Rover, Jaguar and Lotus into extended-range electric cars.

After the Range_e test program has ended, the REEVolution team will focus their attentions on a prototype range-extended electric Jaguar, but that doesn’t mean Land Rover isn’t serious about producing a plug-in hybrid car.

We’ve been told Land Rover is planning a production range-extended hybrid car, but just not what it will be, or when.

Like everyone else, we’ll have to wait and see.