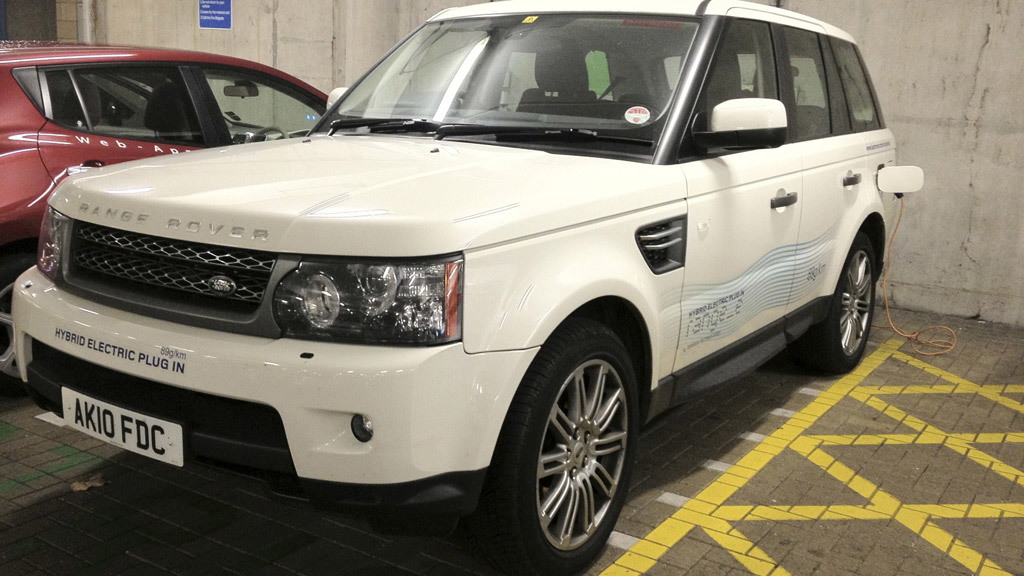 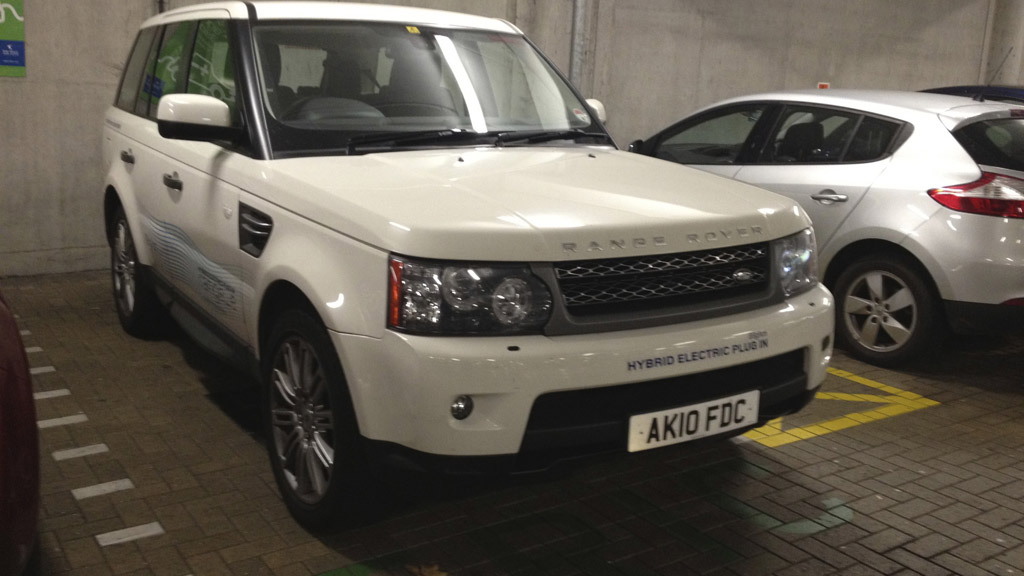 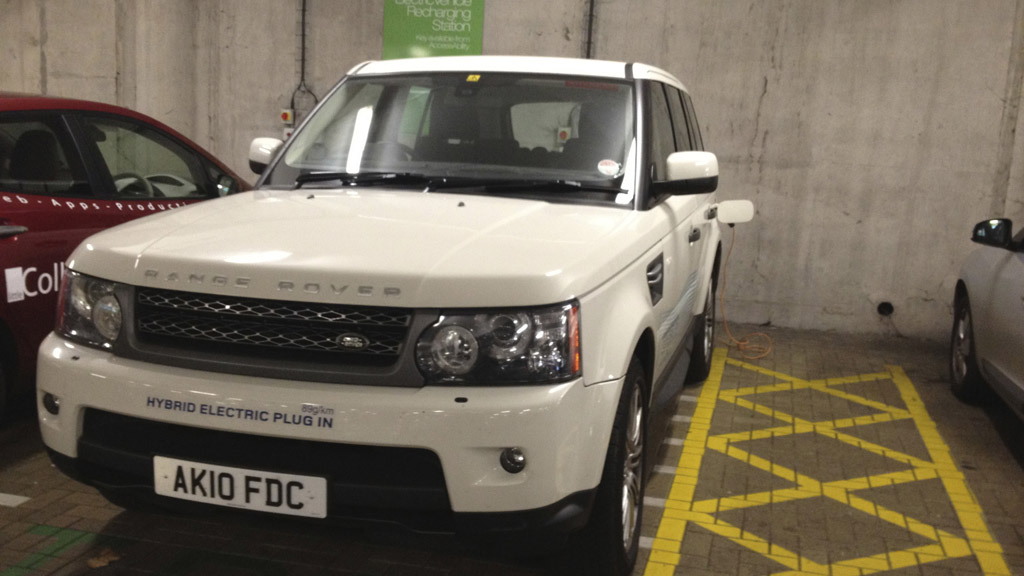 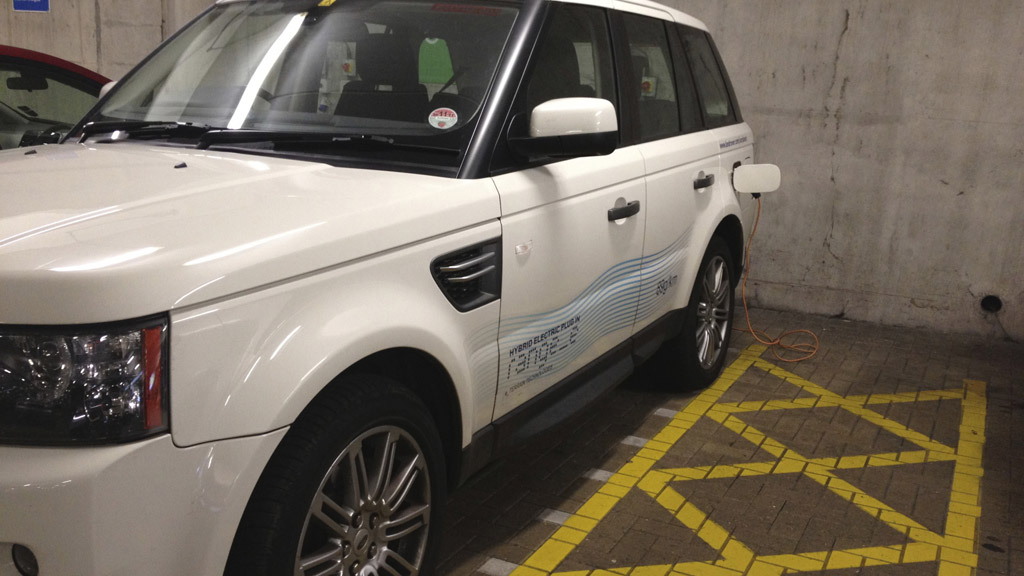 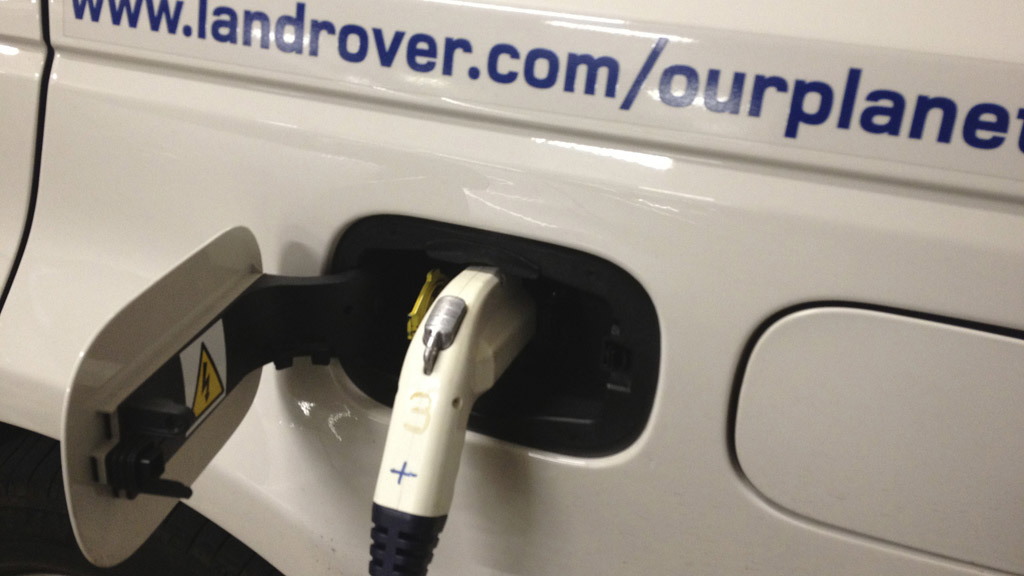 Sometimes, the staff of Green Car Reports has to travel hundreds, even thousands, of miles to bring you first drive reports, auto show highlights and exclusive green-car coverage.

Other times, we just have to visit the local shopping mall. That's where we took these exclusive photographs of a completely undisguised Range Rover Sport diesel plug-in hybrid prototype, plugged in at a convenient public charging station.

Spotted on Saturday in an underground parking lot at a shopping mall in Bristol, U.K., the prototype looks on first glance like a standard white Range Rover Sport.

But the "Hybrid Electric Plug-In" lettering on the front bumper and the side graphics give it away. The test car bears identical markings to the Land Rover range_e concept shown at the 2011 Geneva Motor Show this past March.

Remarkably, though, this one wears none of the camouflage panels usually seen on prototypes when venturing onto public roads. Perhaps--channeling Edgar Allen Poe's The Purloined Letter--the makers thought it would be entirely hidden in plain sight?

The range_e concept shown in Geneva shared its body with the 2012 Range Rover Sport, but the equipment under its hood had several new components compared to its fuel-guzzling cousin.

That concept--and surely this prototype too--was powered by a high-efficiency, turbocharged 3.0-liter V-6 clean diesel engine, with a 69-kilowatt (93-hp) electric motor sandwiched between the engine and an eight-speed ZF automatic transmission. All-wheel drive is fitted, of course--it is a Land Rover.

The diesel plug-in hybrid Range Rover we photographed is clearly a pre-production prototype, complete with various obligatory warning decals. It also has a string of lights that looked like a temporary state-of-charge indicator in the right rear window, above the J-1772 charging socket.

Altogether there are three "fuel door" openings on the prototype, two on the left and one on the right. The front left one obviously contains a J-1772 charging socket, since the car was plugged in to the garage's charging station. We expect the one on the right covers the standard diesel fuel filler.

The left rear door, we surmise, could contain a quick-charge socket--or perhaps a charging port of a different format.

Two interesting details: First, the center of the rear seat is marked with a "Not A Seating Position!" sign, noting that no restraints were fitted to that position. And second, there was a big bag of different cables, converters perhaps, in the load bay.

Our prototype's number plate indicates that the car we saw is a 2010 model, first registered on March 5 of that year. The CO2 emissions of the standard vehicle with a 3.0-liter diesel are given in the registration data as 243 g/km.

The "89 g/km" sticker on our car represents an emissions level almost two-thirds lower, meaning a significant proportion of the test cycle is likely spent in all-electric mode.

These appear to be the first published photos of this undisguised prototype, although the range_e demonstrated in Geneva is a sister car--also white--that was registered on the very same day.

Just for the record, this vehicle is clearly a genuine factory Land Rover prototype. It has nothing to do with the Liberty E-Range battery electric Range Rover conversion we managed to drive--barely--earlier this year.

As for our photos, we suspect a high-ranking development engineer at Land Rover was simply testing a running prototype in real-world use over the weekend--and happened to stop by for a bit of charge at our local mall.

Bristol is less than 100 miles away from Jaguar Land Rover's headquarters in Gaydon, Warwickshire. Coincidence? We think not.