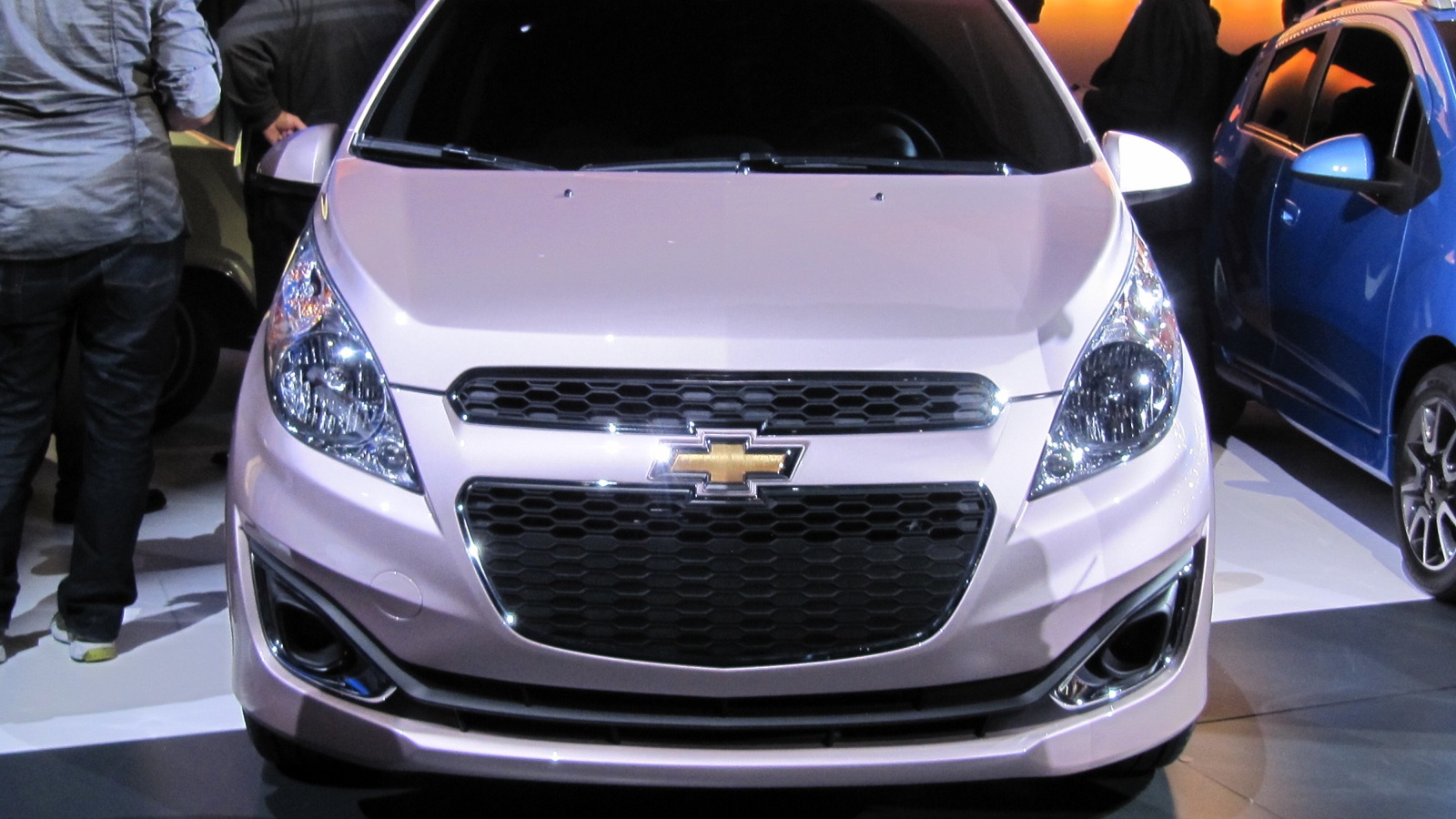 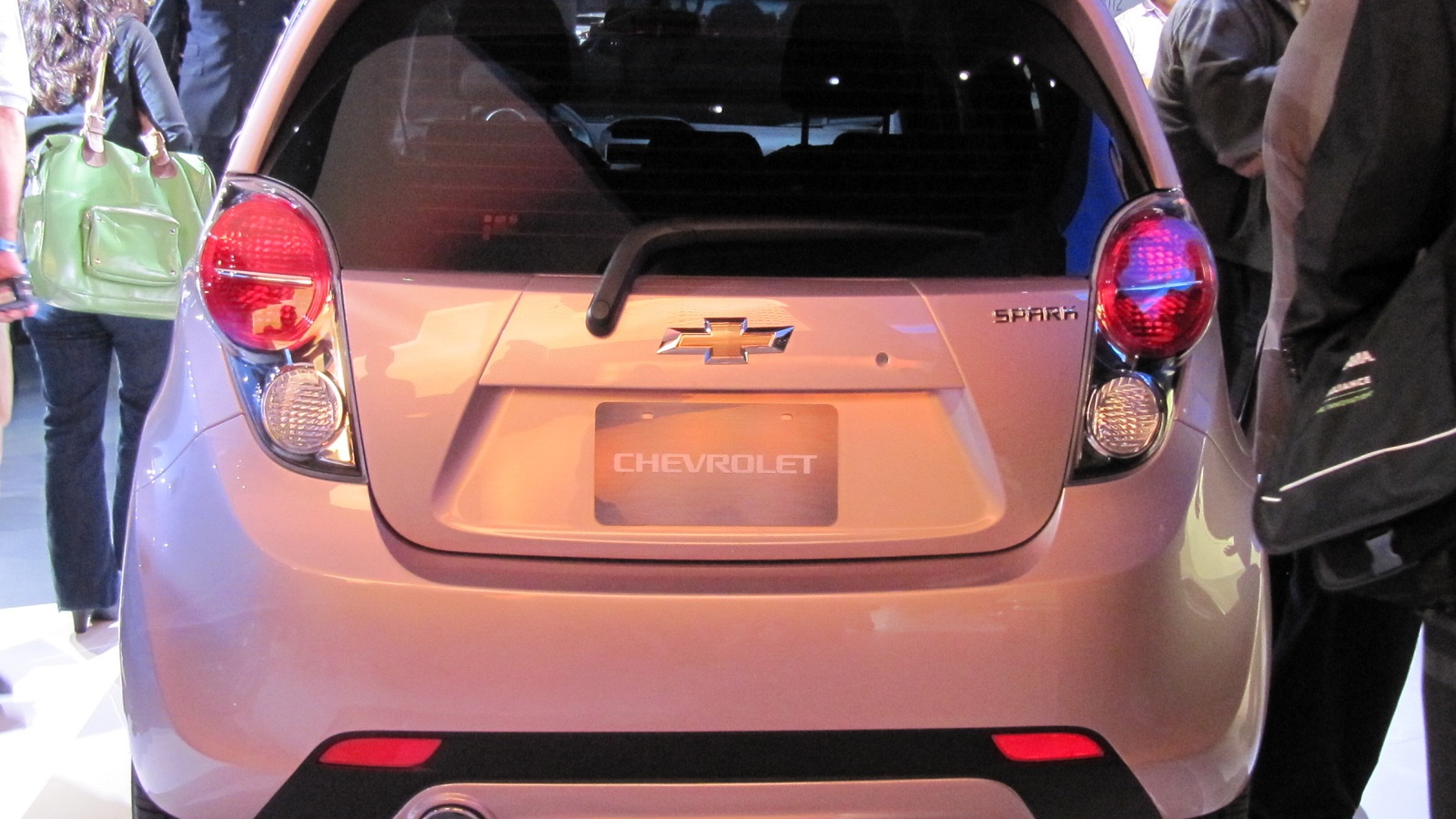 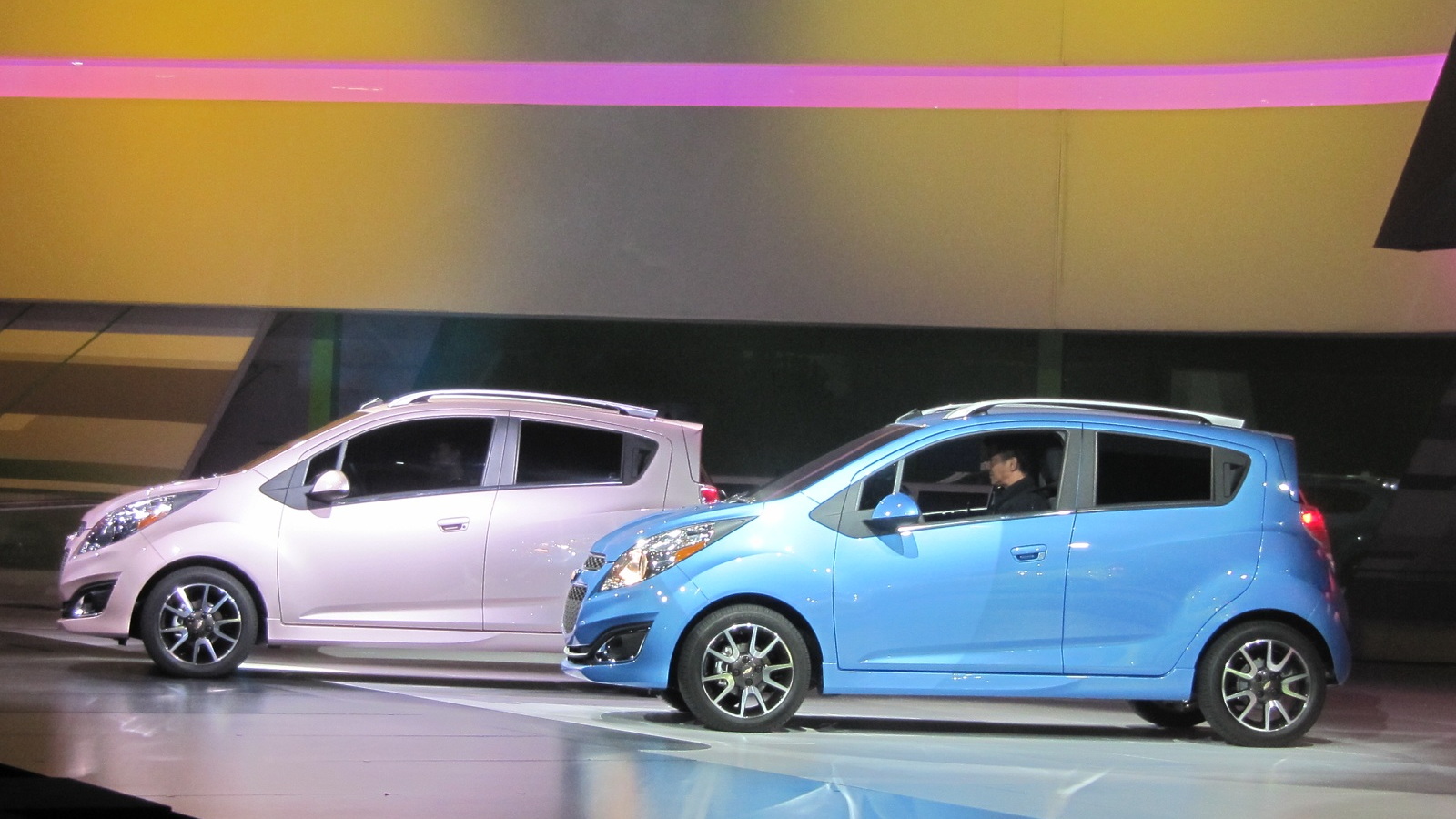 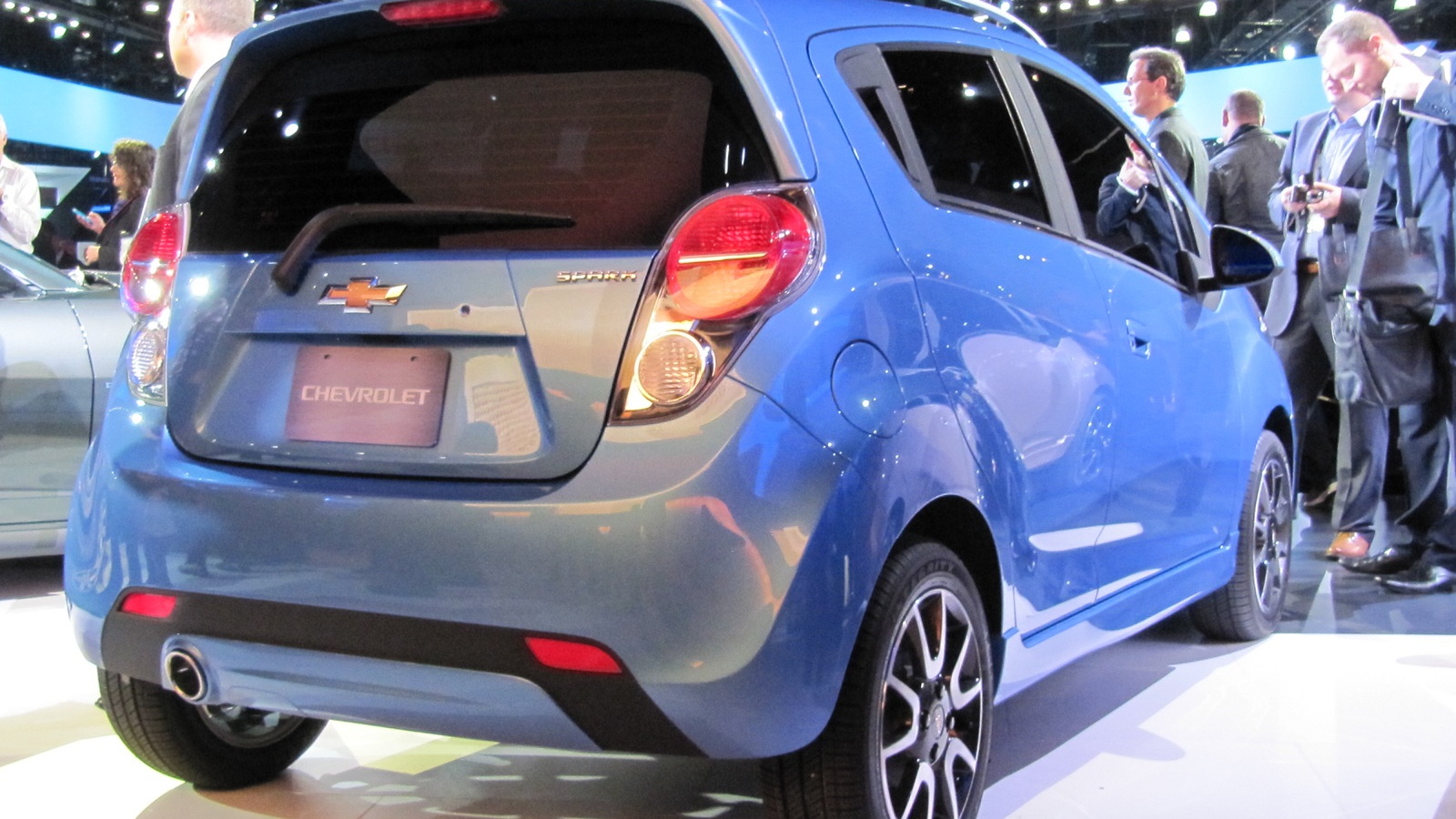 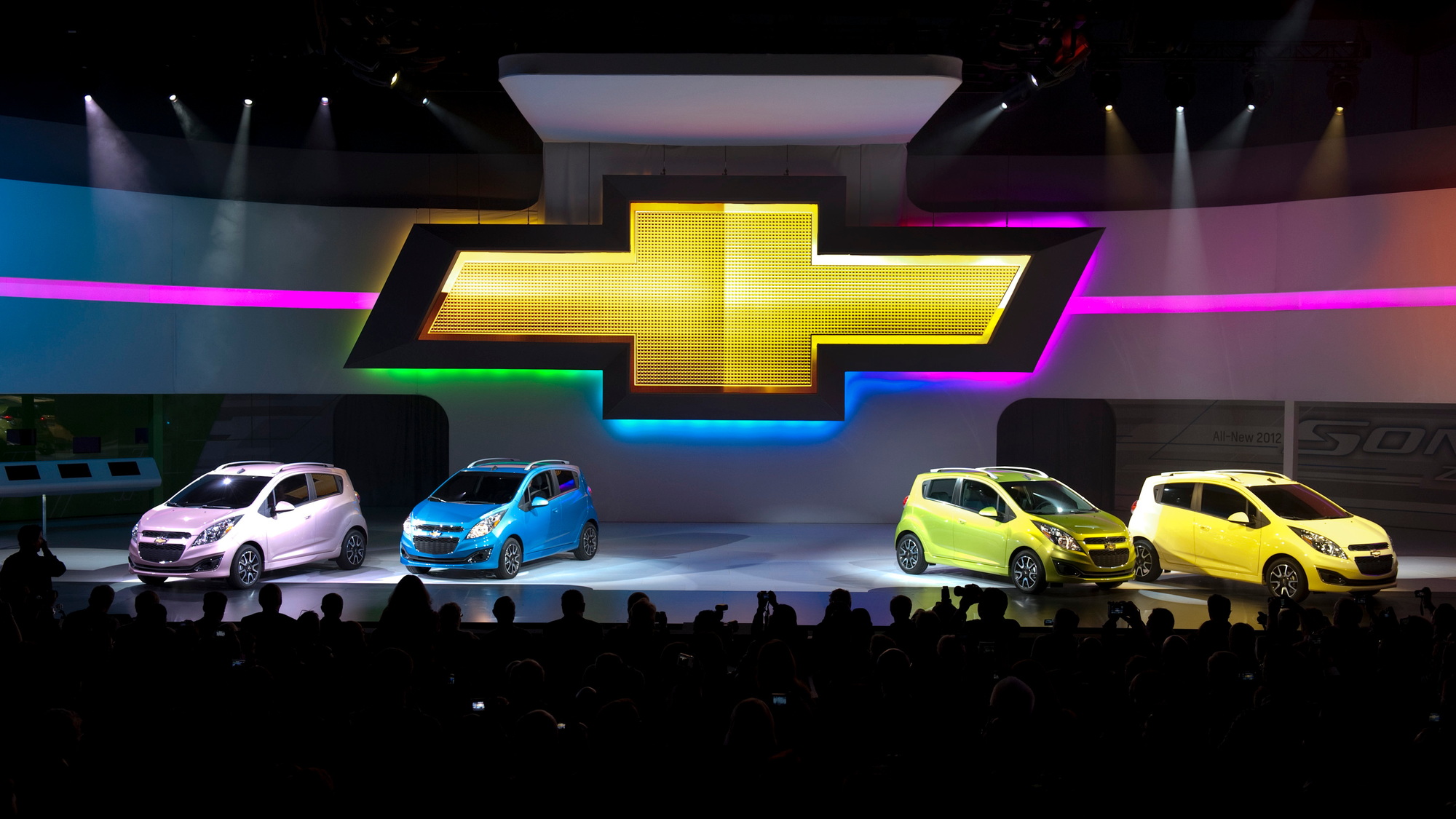 It's the smallest car ever sold as a Chevrolet. It's already a huge hit in India (where it's fitted with a tiny 0.9-liter three-cylinder turbodiesel). And now it's coming to the U.S.

At this week's Los Angeles Auto Show media days, the 2013 Chevrolet Spark minicar shared the stage with a Chevrolet Camaro ZL1 convertible--an odd couple if ever there was one.

But Chevy media event provided more details on the production Spark after it was unveiling last month at a 100th-birthday celebration for the brand.

The engine is a 1.2-liter four-cylinder that puts out 85 horsepower, powering the front wheels through a five-speed manual transmission. An automatic transmission is optional, though it only has four speeds.

The EPA hasn't yet rated the Spark, but Chevrolet expects it to do better than every other minicar--including the Smart ForTwo, the Mini Cooper, and the Fiat 500--and a few subcompacts as well.

(There's also a low-volume electric version of the Spark on the way, though it didn't make an appearance on stage in L.A. and was barely mentioned in the presentation.)

Shorter than a Mini Cooper 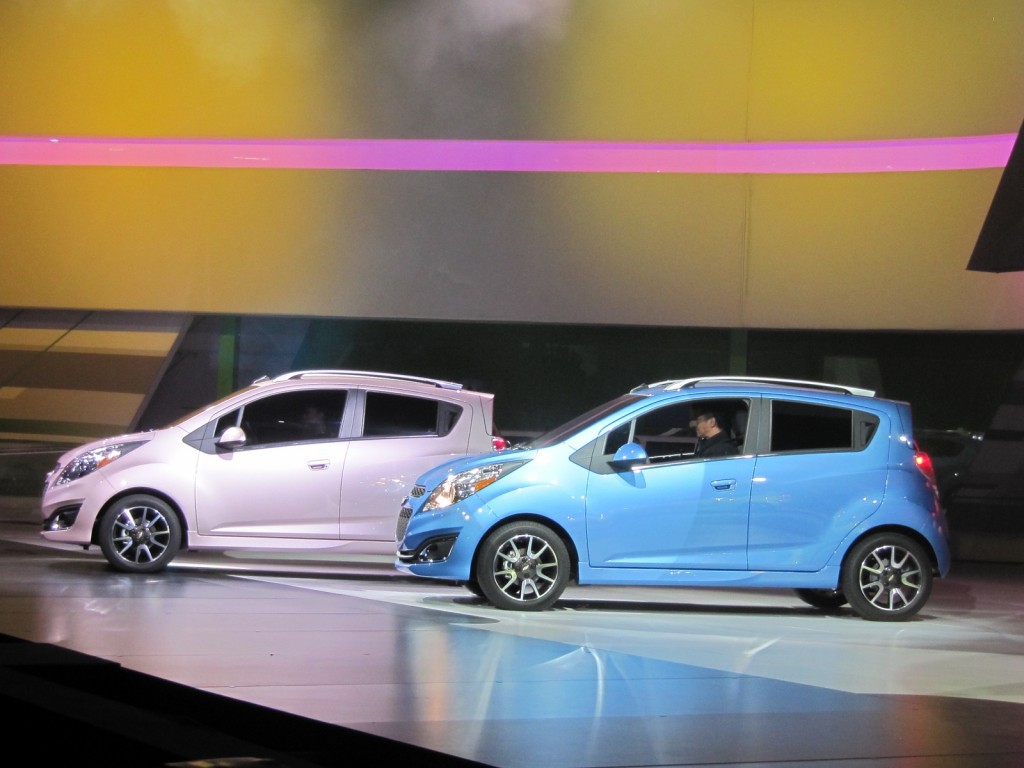 Like virtually every new small car these days, it comes with electric power steering as standard. Brakes are discs in front, drums in the rear.

Exterior styling uses the distinctive Chevy two-section grille in the front, with slightly bug-eyed headlamps swept well back along the tops of the fenders.

The rear of the five-door hatchback is almost vertical (there's no sedan model), and the rear door handles are hidden in the trim a la Sonic.

And it's far roomier than you might expect. With front seats moved forward only a couple of notches, there's room in the rear for 6-foot-tall adults to sit upright comfortably. Because the Spark is tall for its length, the seating position avoids the knees-under-chin position of some small cars.

Inside, the instrument cluster is an even simpler version of the "motorcycle inspired" cluster also used in the Sonic. A body-color accent in the passenger-side dash molding is actually an open tray, and the stereo unit dispenses with a CD player in favor of standard music player connectivity. 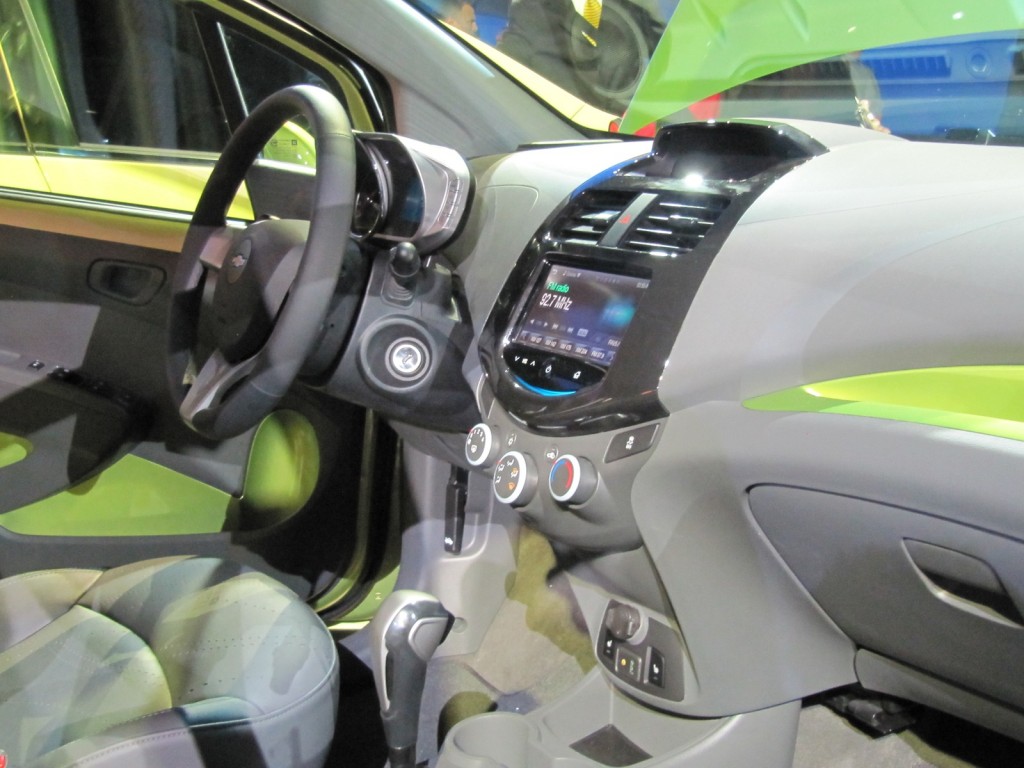 That infotainment system includes a 7-inch color touch screen--definitely an exclusive on a car this small--along with the MyLink system, offering Stitcher and Pandora audio streaming through a smartphone data connection. SiriusXM satellite radio will be optional.

Air conditioning comes standard on the 2013 Chevy Spark, as do power windows. Options include a leather-wrapped steering wheel and even heated seats.

As for safety in a car that appears this diminutive, a full complement of 10 airbags comes standard, as does stability control and the Onstar telematics system. 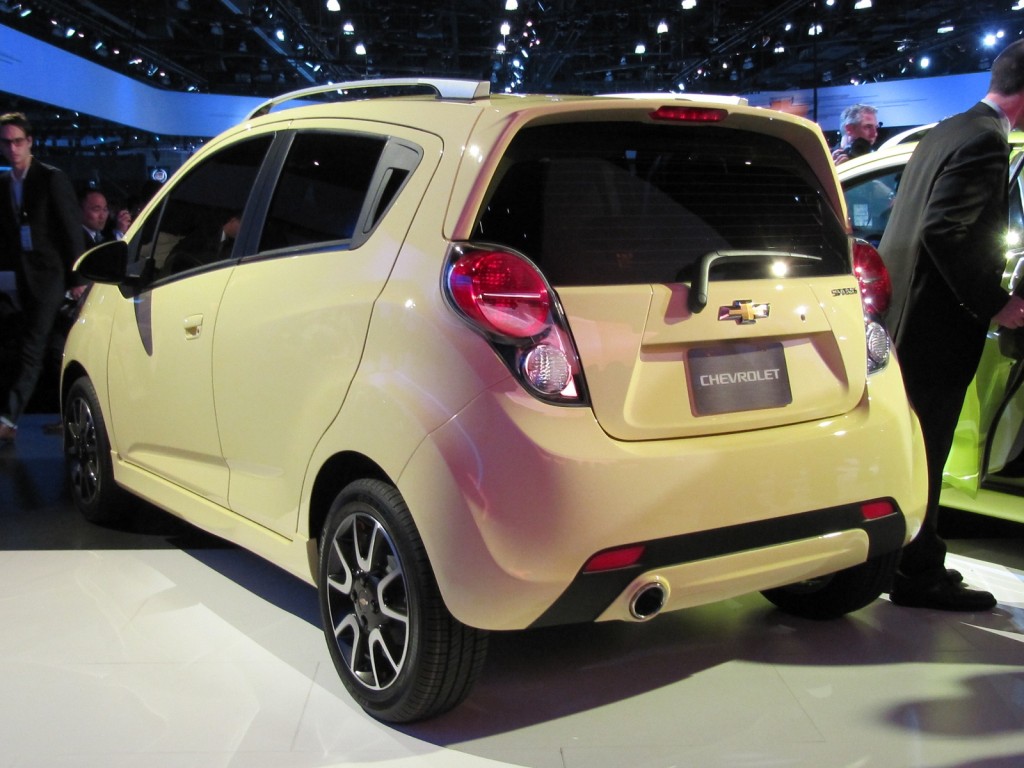 The four Sparks rolled out by Chevy included a pair in what can only called "nail-polish colors," one a bright creamy yellow, the other in what can only be described as lilac metallic. The list of available colors deems those Lemonade and Techno Pink, joined by Denim, Jalapeno, and Salsa.

Chevrolet hasn't said much about how it will price the 2013 Spark, beyond noting that it will be less expensive than the Sonic, which starts at $13,735 for the four-door sedan (plus a mandatory $700 delivery fee).