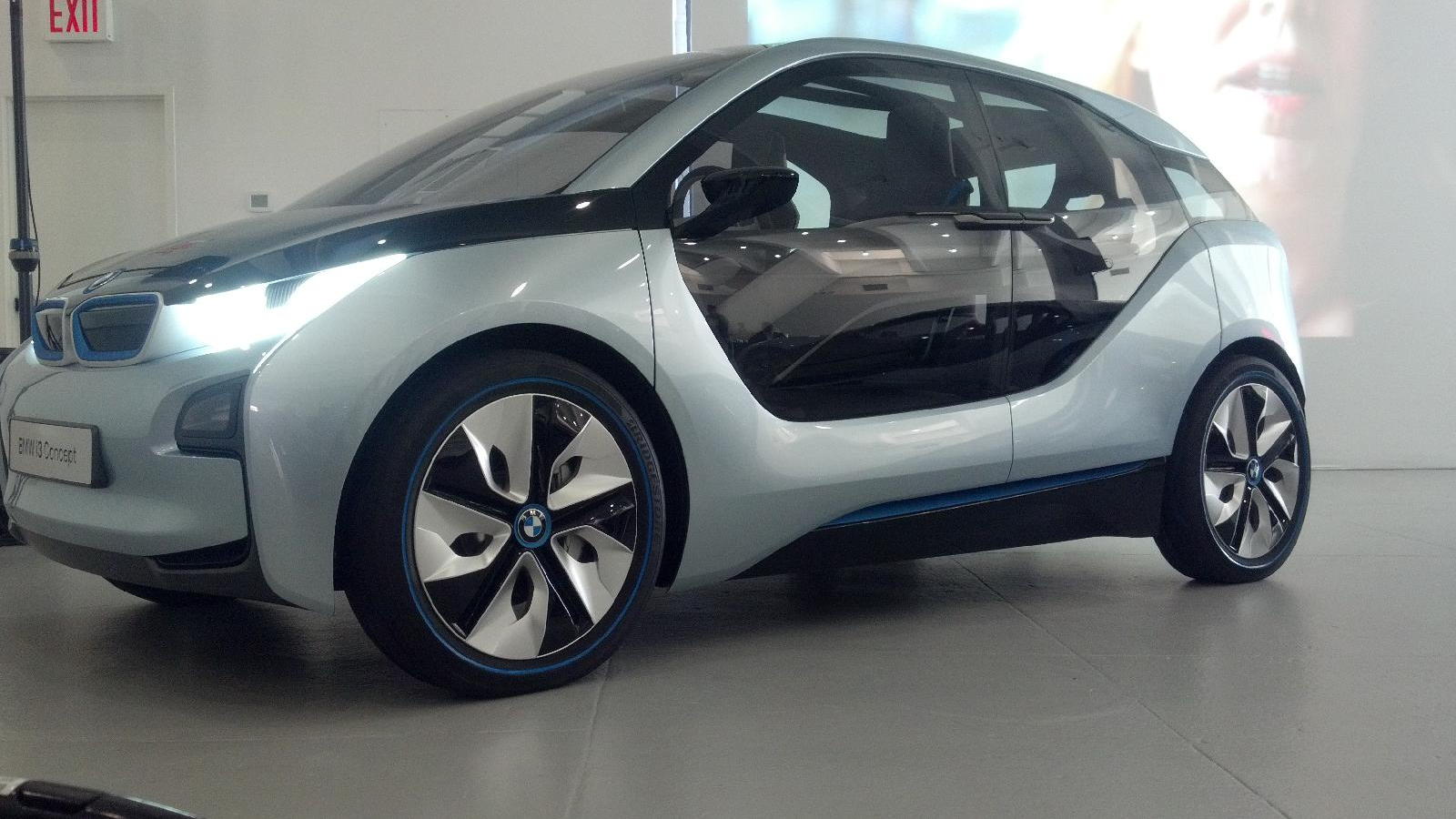 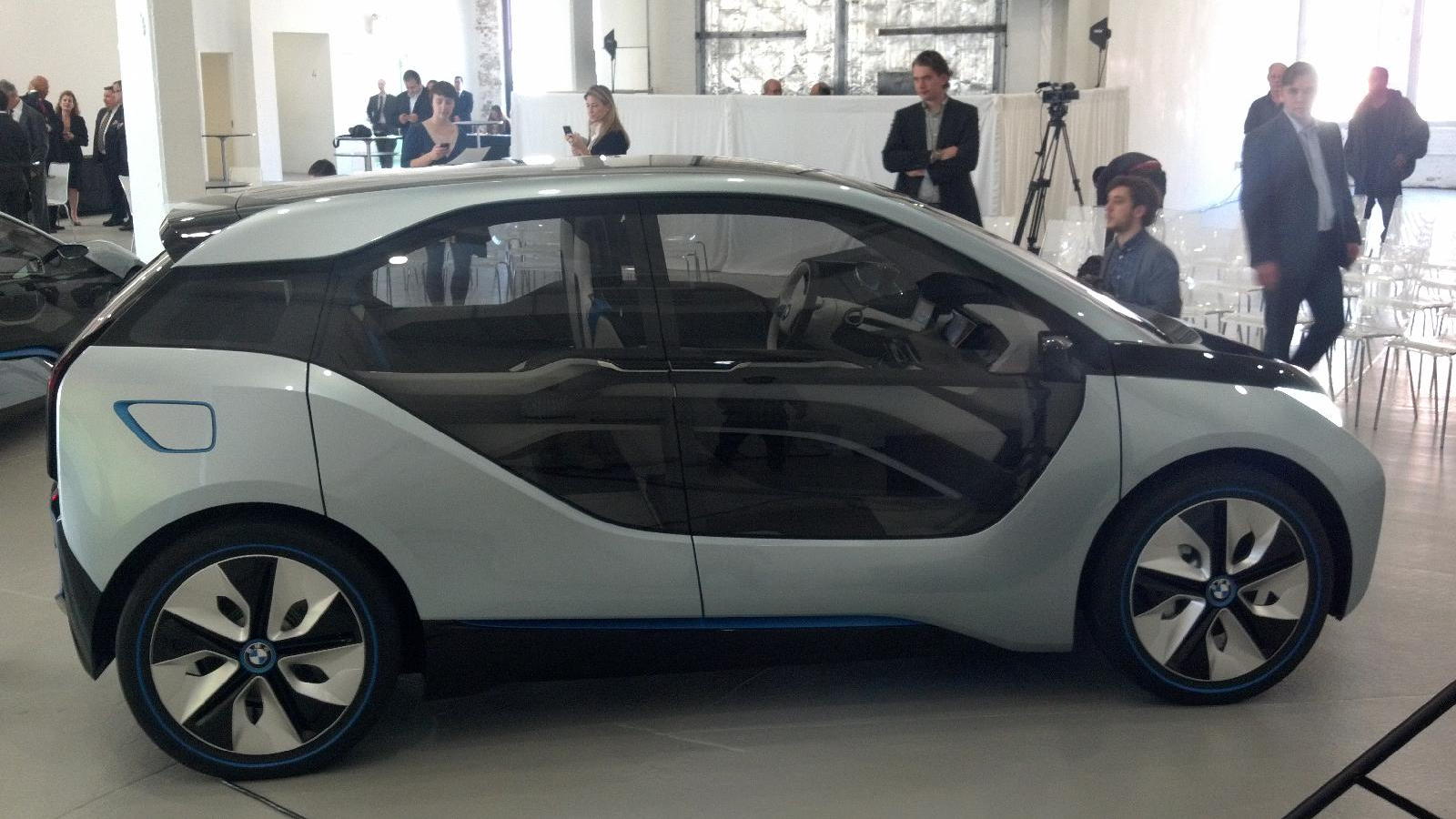 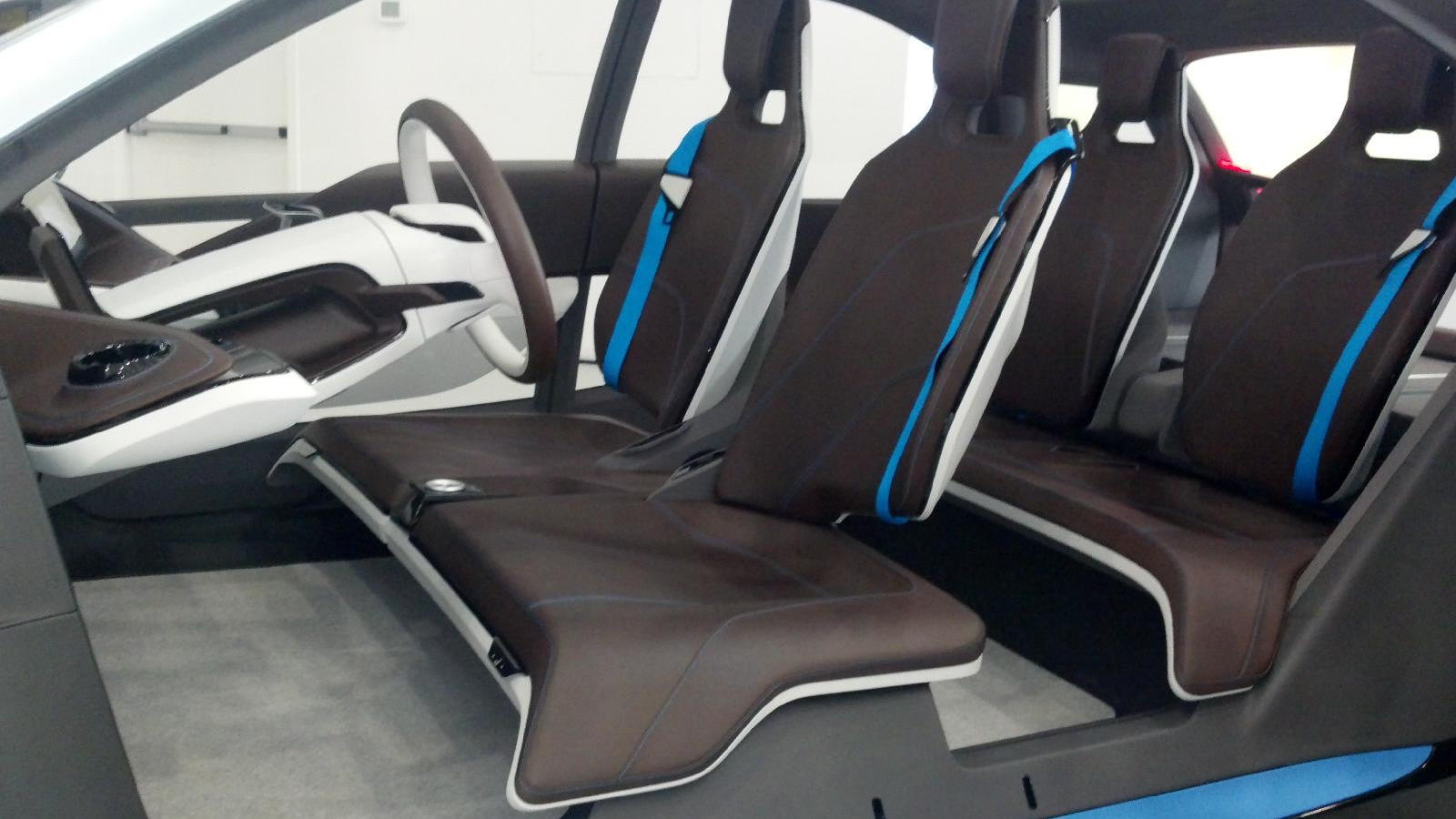 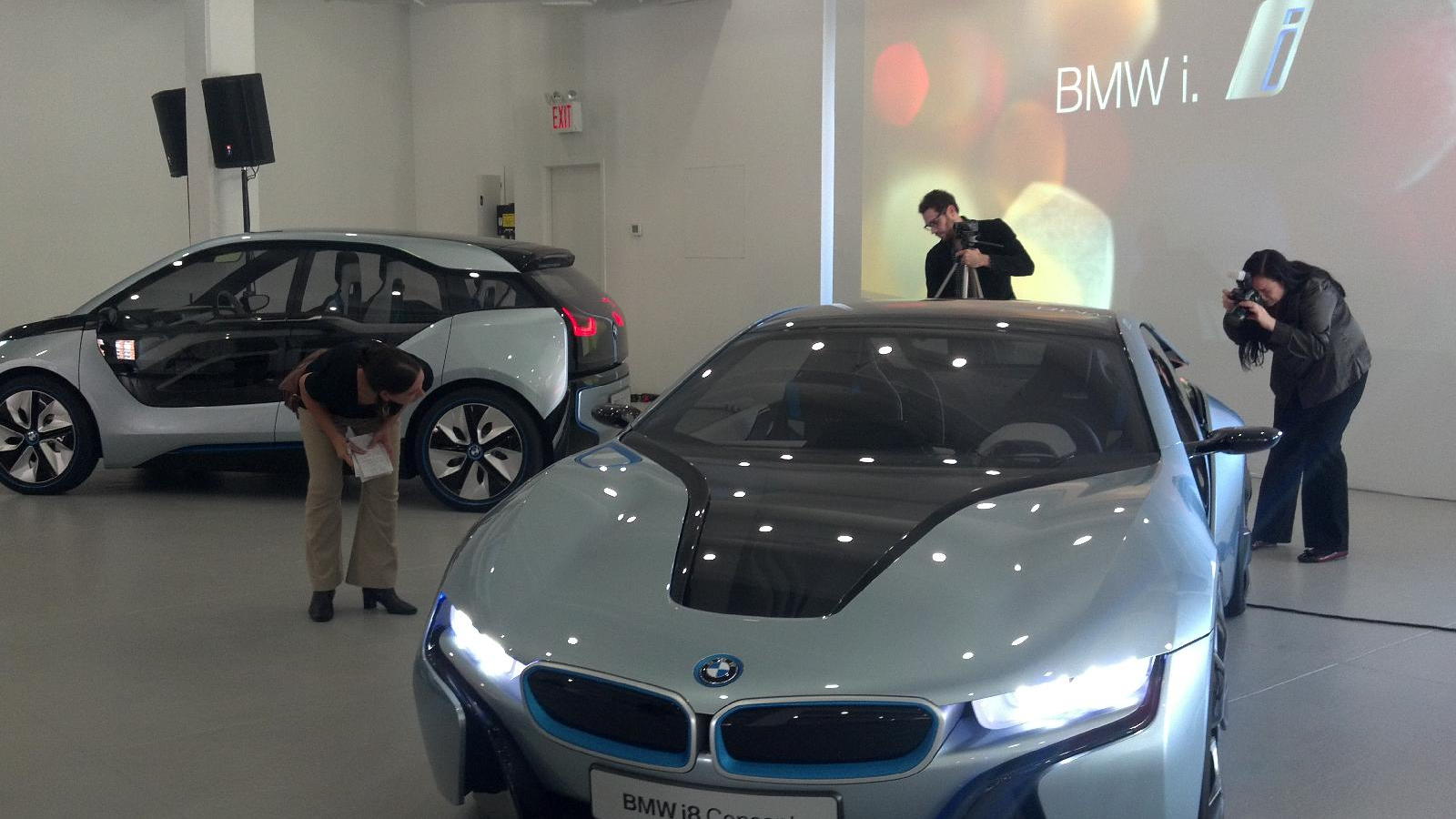 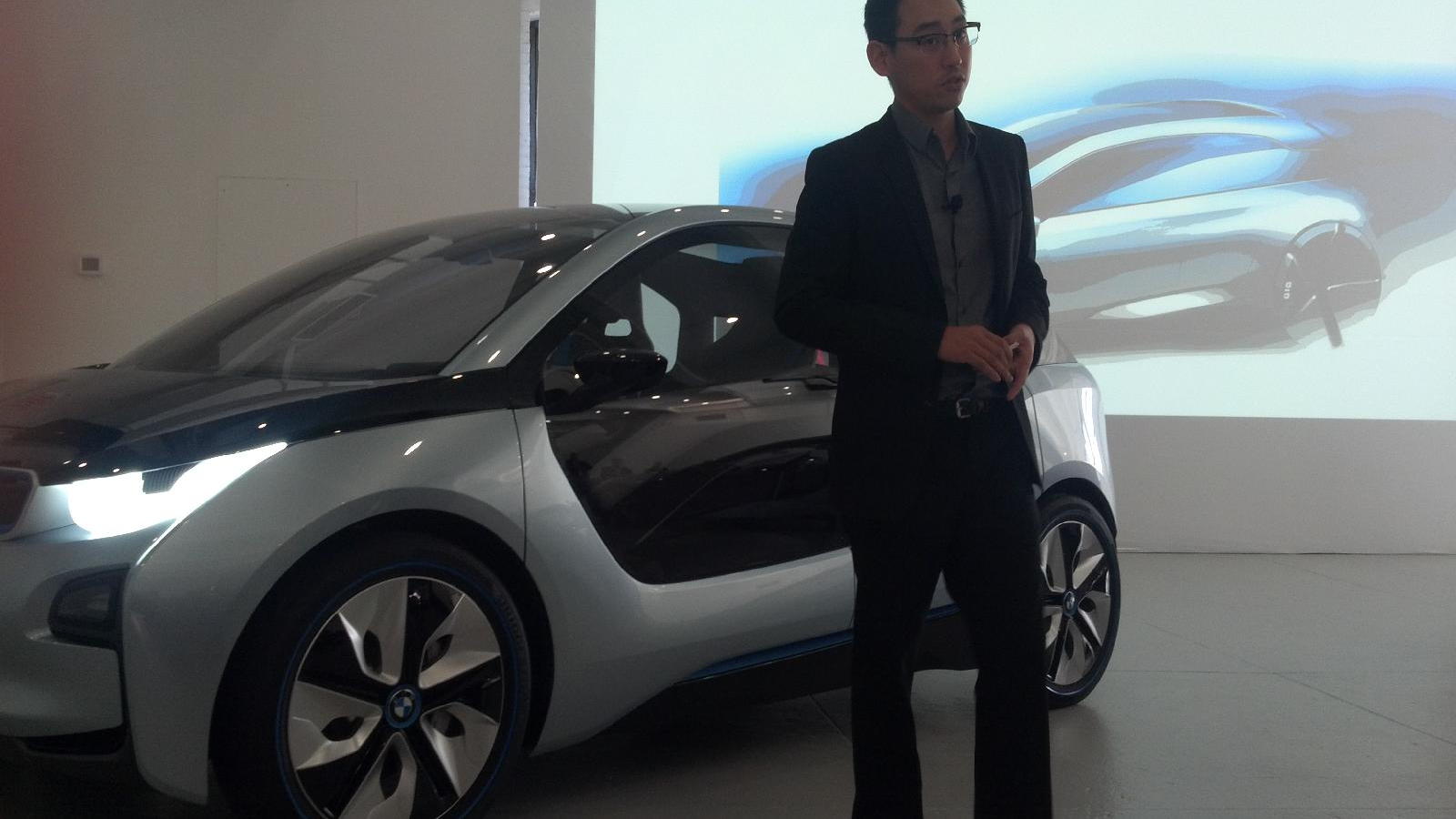 Yesterday afternoon, BMW hosted a Special Sneak Peek Preview Event of the BMW i3 and BMW i8 concept electric cars in New York. Both cars will make their official U.S. debut at next week's Los Angeles Auto Show.

After an hour-long photo session, we were addressed by Richard Kim, exterior designer for the BMW i range, and Rich Steinberg, manager of electric vehicle operations and strategy.

Kim said that when he and his team were originally commissioned with the task of designing these cars, they worked from an office separate from their peers, to help them start with a clean slate. As a result, they developed the "stream flow" theme that will be incorporated into all cars in the new i line.

Like the classic Hofmeister Kink in the parent brand's second window line, the "stream flow" theme will be the trademark of all BMW i vehicles.

Steinberg then focused on the development of the drivetrain, noting that separation into "Life Cell" and "Life Drive" modules allowed BMW to maximize interior room and luggage space.

A video showed how the drivetrain of a conventional internal-combustion engine platform is laid out, and compared it to a car based on a retrofitted platform like the ActiveE. It has to fit all the necessary electric parts, resulting in compromises to fit everything in, not to mention that different reinforcement structures are needed.

He then showed how a purpose-built vehicle like the i3 allows BMW to maximize the occupant space inside the life cell. With no transmission tunnel, the floor is completely flat and occupants can slide freely across the bench seat to exit on either side if the situation dictates.

This design also allowed BMW to offer more luggage space than typical for a compact car, since there is a front trunks well as the load bay behind the rear seats, reached through the hatchback.

The BMW i3 will debut in 2013 and will be offered as a battery electric vehicle with roughly 100 miles of range. Shortly after its introduction, BMW will offer a range-extender option, with a small gasoline engine that will double the car's range.

The range extender, to be called REx, will have no physical connection to the wheels and will serve only to sustain the battery's charge through a generator.

The BMW i8 will be available in 2014, and is a plug-in hybrid. It will travel approximately 20 miles in electric mode, driving the front wheels, before its 220-horsepower turbocharged 1.5-liter three-cylinder engine kicks in to drive the rear wheels. Steinberg said the i8 will accelerate to 60 mph in "well under" 6 seconds.

The body shells of both cars are made entirely of carbon fiber-reinforced plastic, sitting on aluminum frame platforms that contain the running gear. Some of the outer surface panels are made up of CFRP (the roof for sure, and I believe the hood also) while some other panels are plastic.

Photo Gallery: BMW i3 Electric Car And i8 Plug-In, Under The Hood: Live Photos

This design lets BMW save significant amounts of weight. The i3 weighs about 2,700 pounds, or 1,300 pounds less than the BMW ActiveE--yet it will have the same 170 hp and 184 lb-ft of torque. Steinberg was quick to point out that the i3 won't simply be an urban or commuter car "with no soul."

It will, he said, offer the exhilarating driving experience that's expected of any BMW.

Tom Moloughney is a New Jersey electric-car advocate, MINI E driver, and restaurant owner. His last article for GreenCarReports was a drive report on the BMW ActiveE electric car prototype.